Reunion Island: a piece of France in the Indian Ocean 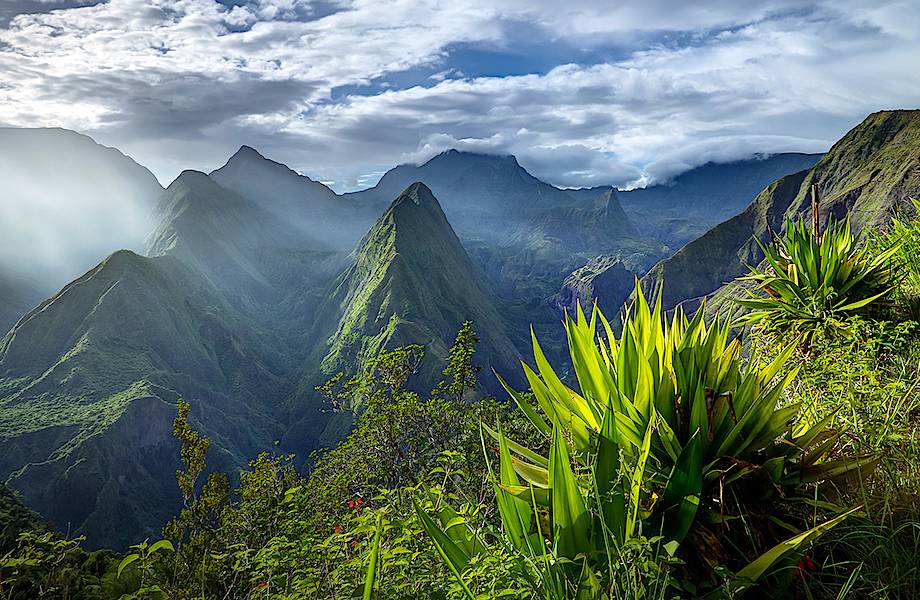 Reunion Island is a special world unlike any other region of the world. It is not a colony in the traditional sense of the word, because the island was first inhabited by Europeans, and the indigenous peoples of the region did not live there before the arrival of the sailors. Throughout history, the island has changed its name 7 times, and the modern population speaks a unique language – a mixture of French, Malagasy and African dialects. The island of Reunion is mentioned in Arabic sources under the name Dina Margabin, known to navigators since the X century. Portuguese explorers were the first Europeans to land on the island in 1500, and the island got a new name – the island of St. Apollonia. And since 1642 the island has been French, except for 4 years of British rule in 1810-1814. Since then, it has had different names: Bourbon Island, Bonaparte Island, Bourbon again, and finally became Réunion in 1848. 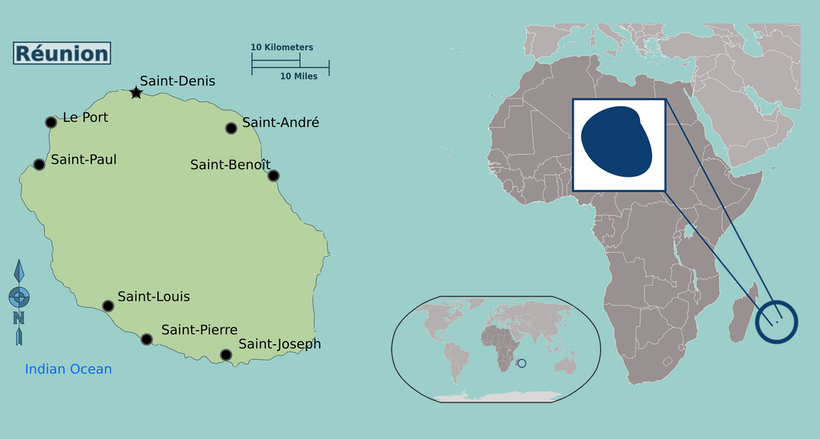 This picturesque island of 2,500 square kilometers is part of the Mascarene group of islands and is of volcanic origin. In addition to an extinct volcano, the island has an active, regularly erupting volcano, the Piton de la Fournes, and about 20% of the island is occupied by lifeless lava fields. The rest of Réunion is covered by tropical forests and agricultural fields, where sugar cane is mostly grown. 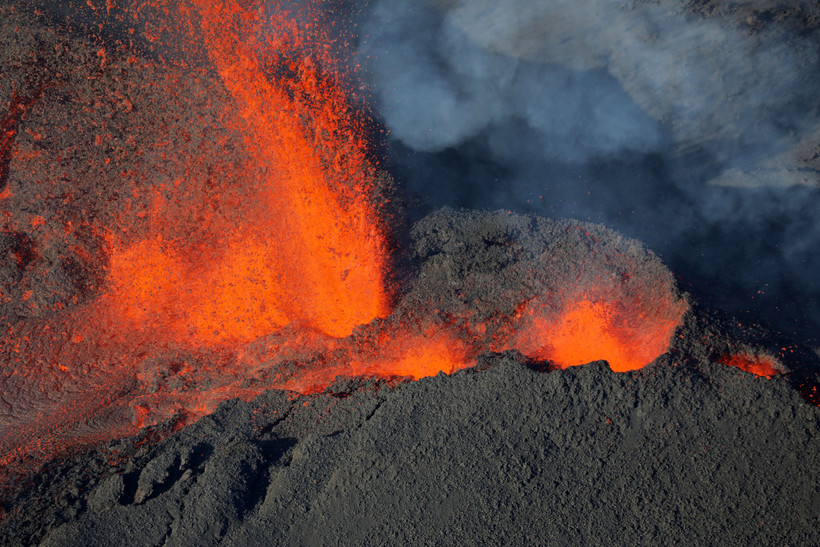 Réunion’s modern population is an unimaginable mix of cultures and peoples. The first inhabitants of the island were the Portuguese, then the French settled here, and later slaves from Africa and neighboring Madagascar were brought to Reunion. In the 19th century, after the abolition of slavery, workers from India and China began to arrive on the island, which also added to the national picture of the island. As a result, today Reunion is home to more than 820,000 people, of whom only 25 percent are French. More than half of the population is Creole, descendants of mixed marriages of French, Africans and Madagascans. Because of this, the language on the island is very peculiar. Although French is the official language, the majority of the population speaks Creole, a mixture of French, Malagasy, and African dialects. There are also quite a few natives of India on the island, about 20% of the population. 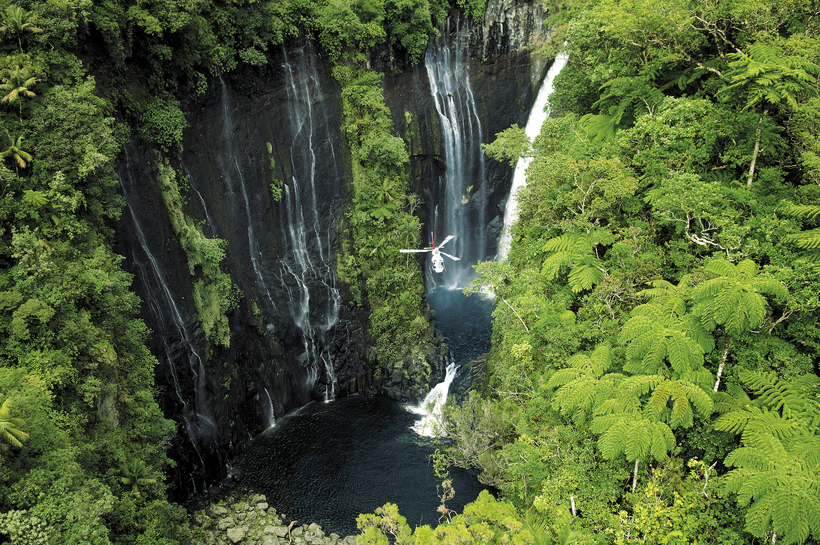 The capital of the island is Saint-Denis, with a population of about 130,000 people. The main occupation of the population of Reunion is the cultivation and processing of coffee and sugar cane. In addition to the traditional sugar, it is used to make rum, which is also exported along with vanilla, geranium extract, and other exotic flavorings. Part of the population is engaged in fishing, sheep breeding and the tourist sector.

In recent years, the island is actively developing tourism business. Favorable climate with year-round even temperature, natural attractions and European service attracts fans of beach holidays and active travelers from around the world. There is something to see here: an active volcano, beaches with black volcanic sand and picturesque waterfalls will not leave anyone indifferent. 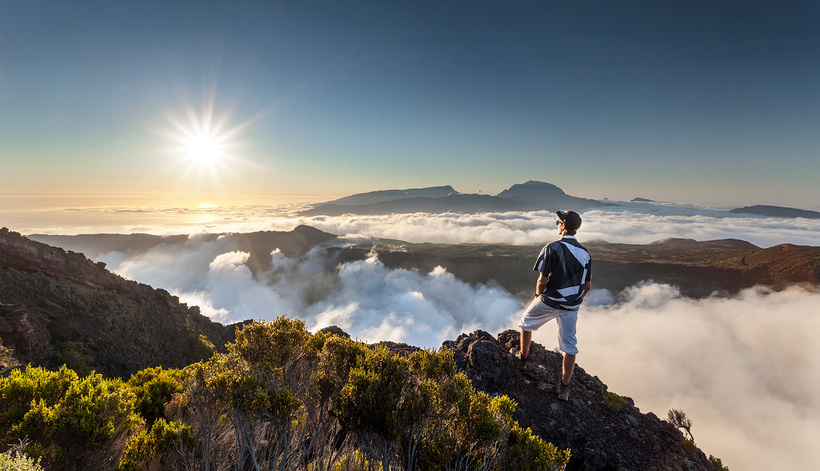 The material is copyright, when copying the link to the article or website travelask.ru

The island of Réunion has the status of an overseas department of France in the Indian Ocean, with all its implications: – prices in Euros – an abundance of French wine and champagne as well as cheese from France – license plates on cars are Euro-French with the code 974 – a Schengen multi-visa from 6 months is required to visit Réunion 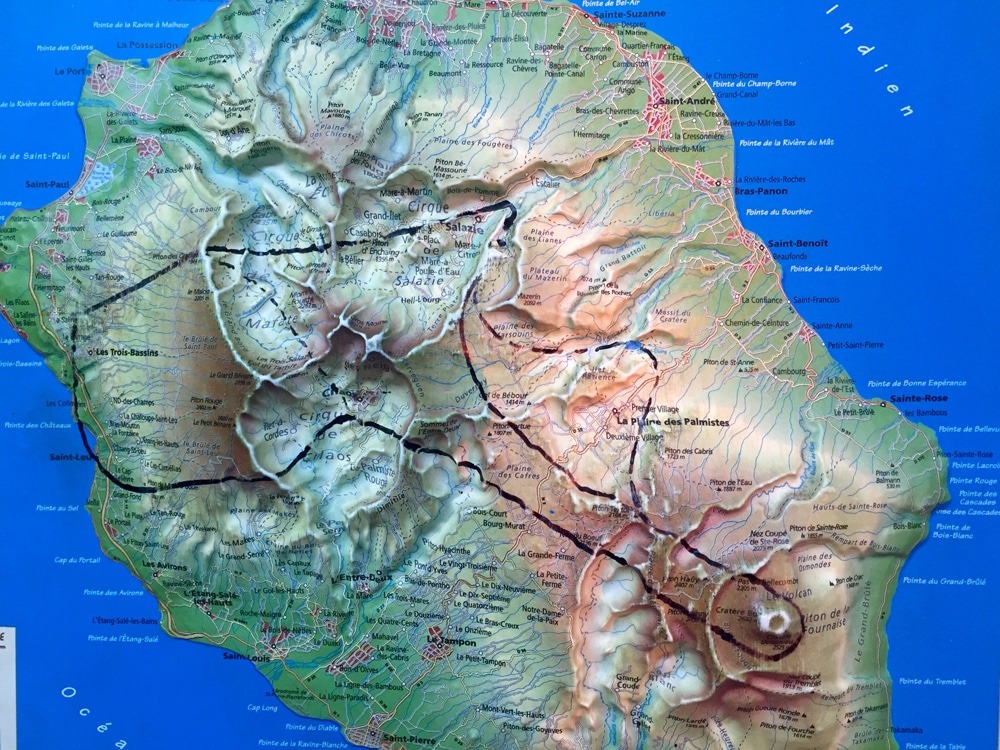 Visa for visiting the island of Réunion

Since the island of Réunion is considered an overseas department of France, a Schengen visa is required to visit it. The duration of multivisa must be 6 months and longer. But you can visit the island, if you have a residence permit in one of the Schengen countries – we have cards with the Italian residence permit, and it worked, although the border control for a long time consulted, called somewhere, and generally – a tiresome procedure for us. 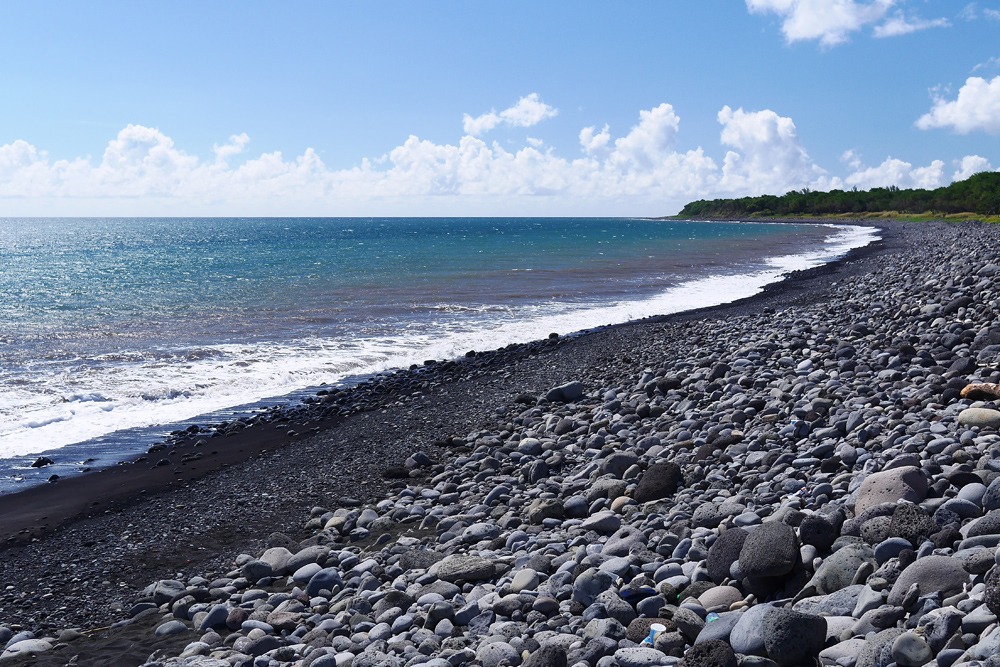 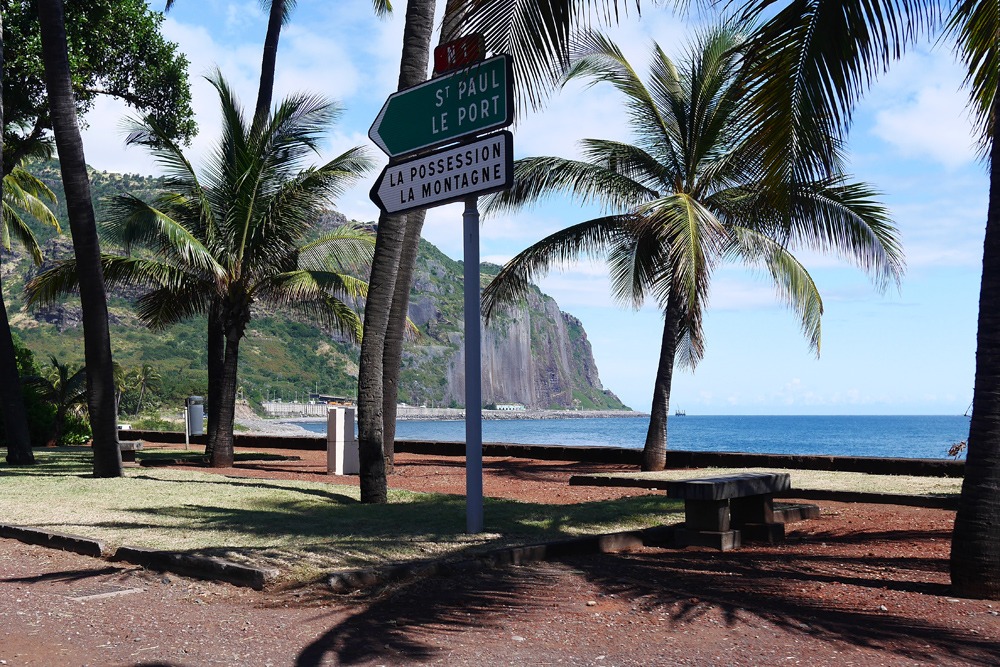 It is mandatory to have return tickets from the island and hotel reservation on Reunion: we had return tickets to Madagascar and one night reservation in an apart-hotel. My answer, “We’ll sleep on the beach,” to the border guard’s question, “Where are the other reservations,” put them in an even greater stupor. And when the question of which city we will be in the Irinka said Saint Paul …, and I continued … Belmondo – laughed all the ….

READ
São Miguel Island in the Portuguese archipelago of the Azores 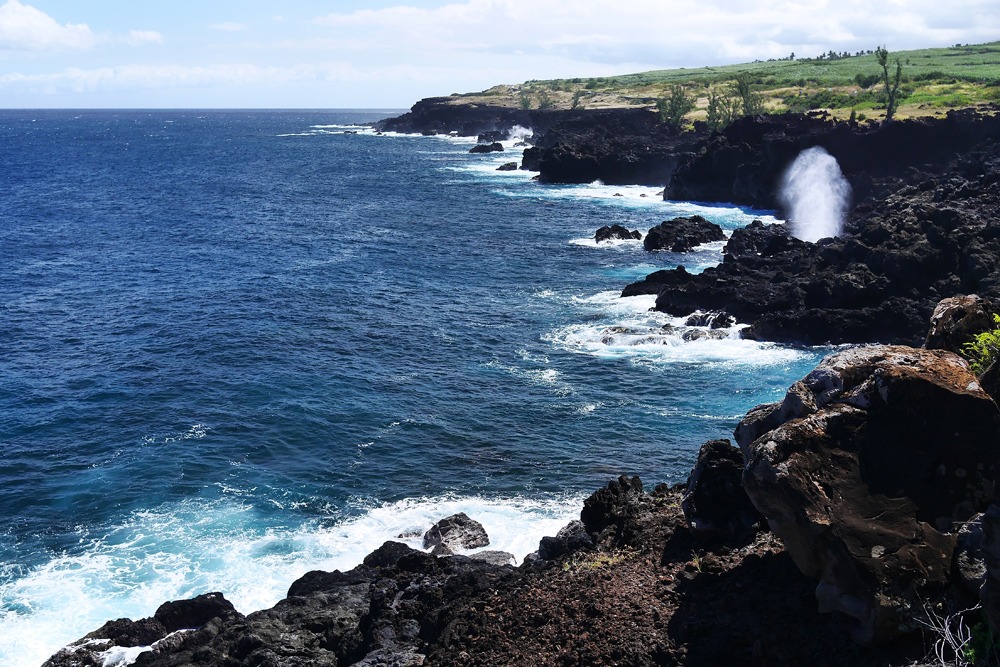 Transportation on the island of Réunion

Of course, renting a car. In advance, on the website to find the best prices to rent a car, I booked the cheapest option – it was a Peugeot 208 from the rental company ITC Tropic Long time ago got the “cheap can’t be good” bump, but nevertheless. And as it turned out, 25 again: 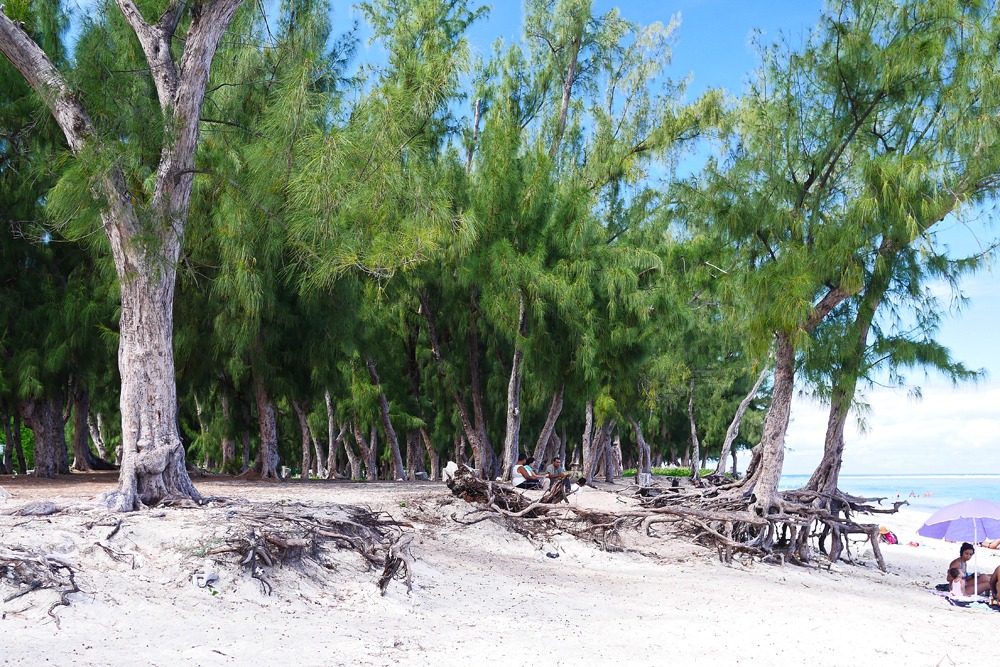 The company has one employee (a woman). Takes care of everything: accepts cars, inspects, gives out. Composted brain for about 30 minutes ahead of the French: in a hatchback had no back shelf and drove it out of town, the other had some other problems Nonetheless, other windows were no queues and their staff were yawning and picking their noses, namely in ITC Tropic was a queue 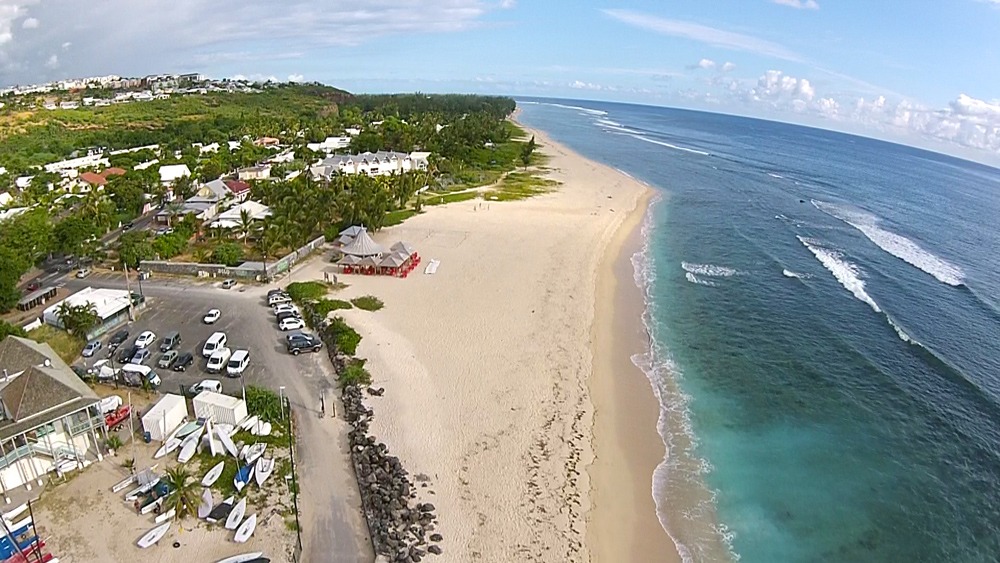 Nevertheless: 25 euros pay if you return the car dirty and 29 euros pay city tax. So don’t use ITC Tropic when choosing from a list of offers from the Reunion car rental search site, no matter how great their offers may be. 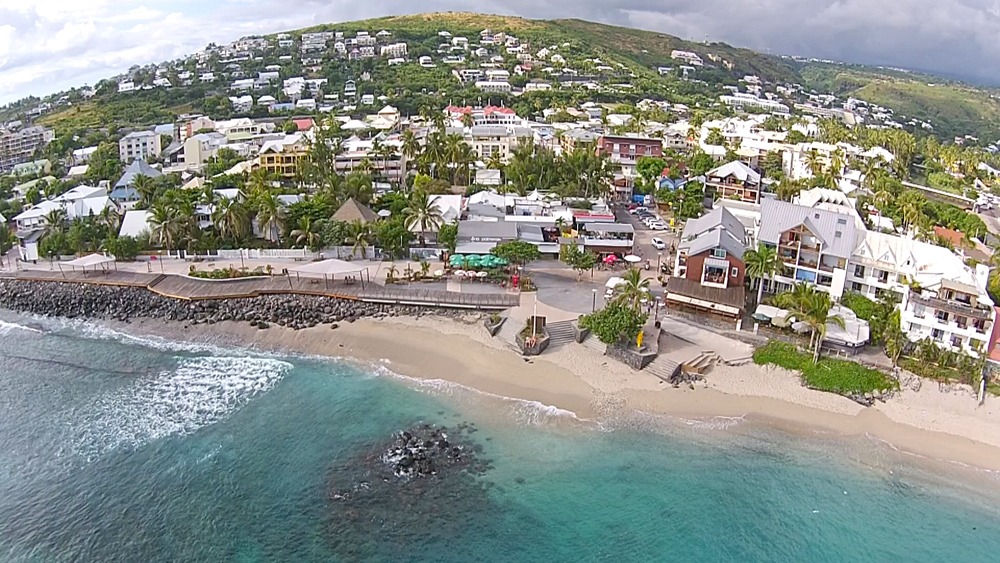 The best option would be to combine a trip to the island of Mauritius with a visit to Reunion. Several flights a day. Fly 250km on a turboprop ATR: before you know it, you’re already in Reunion. You can find and buy air tickets to Reunion here 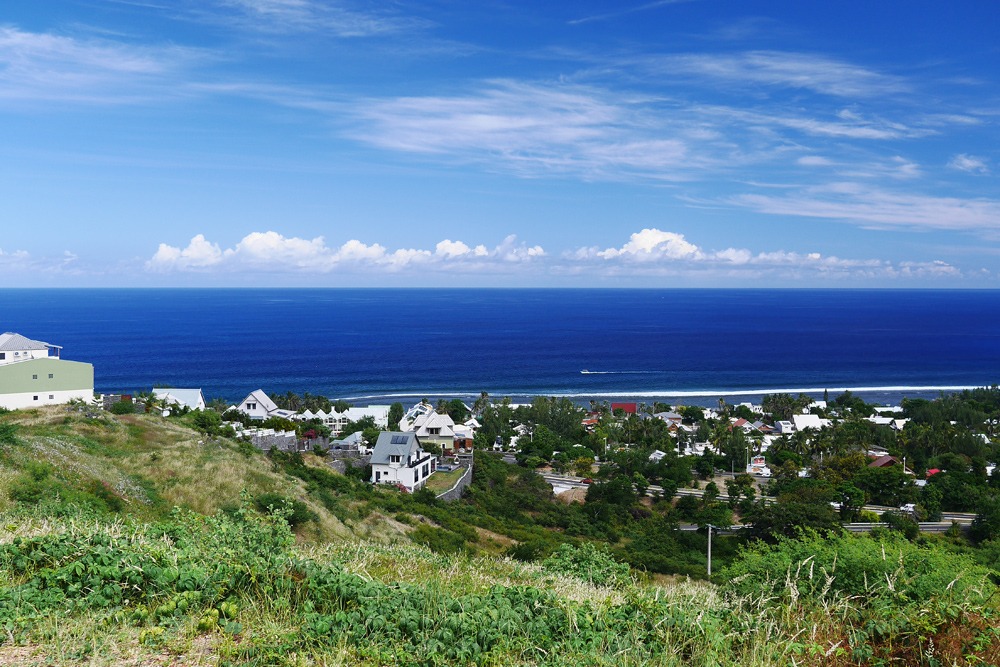 Traffic, navigation on the island of Réunion

Although the island is small and most of it is not adapted for life: mountains, volcanoes, lava fields, however, the island is home to 900 thousand people: white French, Indians, Creoles, that is, the island is overpopulated. And you understand it as soon as you get on the road: traffic, traffic jams, lots of cars. The green hills of Reunion are no longer green because of the houses that have been built, and they keep getting built. Everywhere you look, there are houses everywhere. And if you look at a map of the area (for example, in the navigation or google), but you’ll be surprised by the layout of the cities and villages smoothly turning into each other – a continuous serpentine and spiraling streets. Therefore, without a GPS navigation on the island can not do. It can be rented together with the car for 10 euros per day.

READ
Tilafushi is a junkyard island in tropical paradise. Maldives 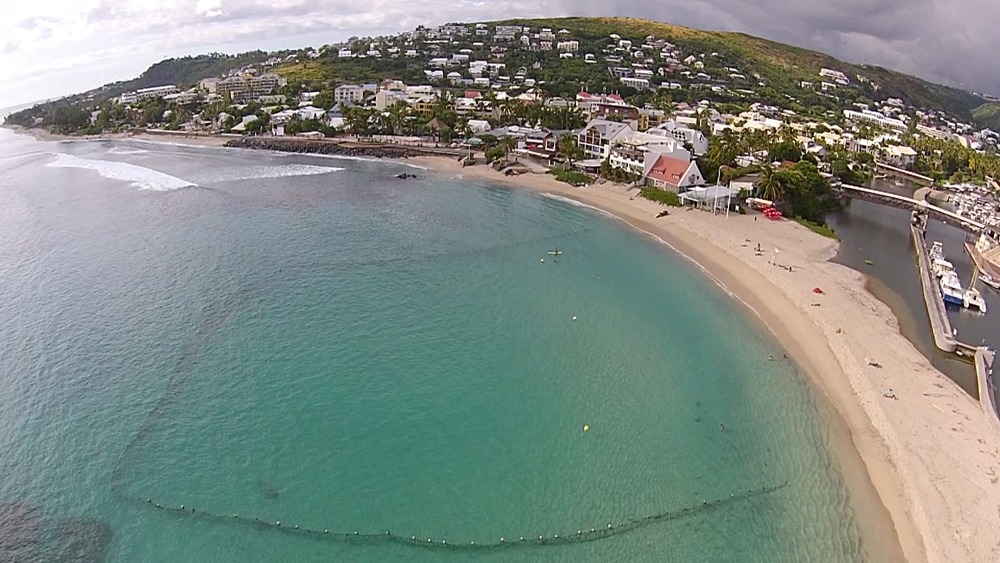 Beaches on the island of Reunion 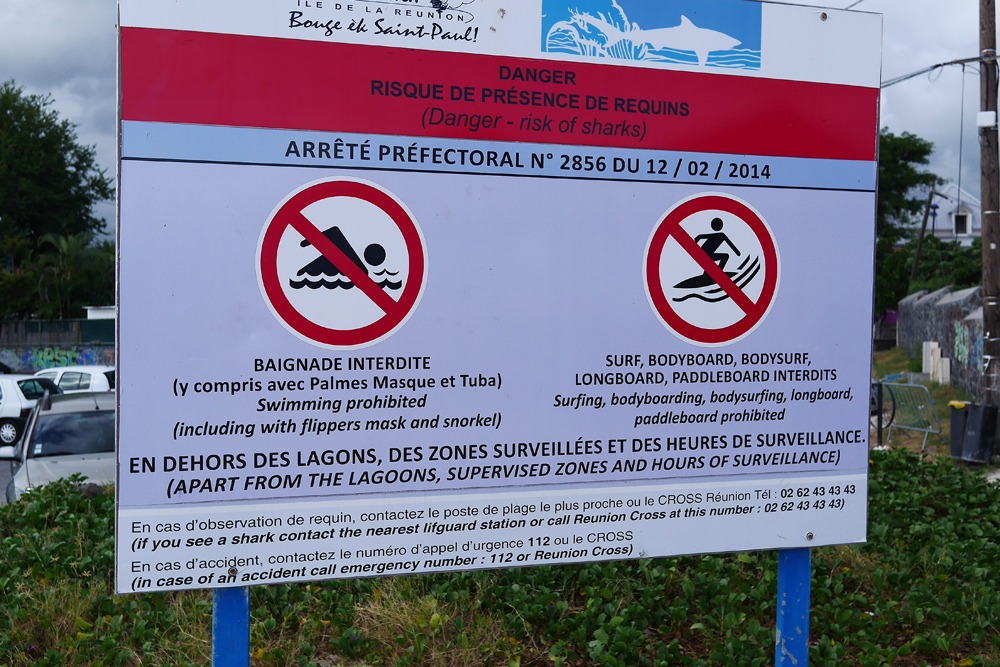 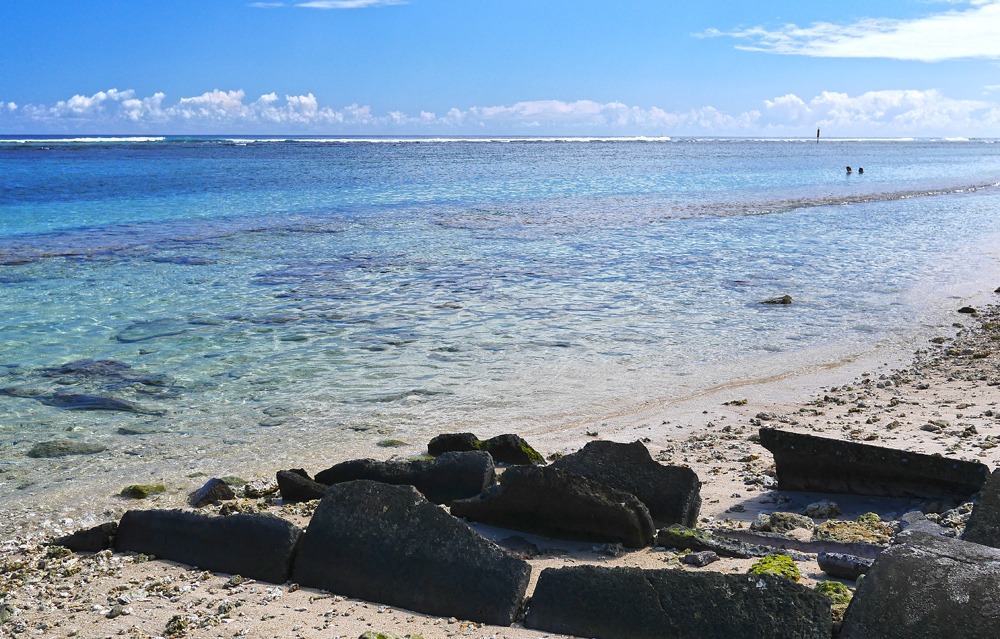 Although I will not take responsibility – if someone likes the rest in Yalta with stepping on the way to the water over the sprawled out bodies (like the wolf in “You wait!”), or maybe like floundering near the shore, knee-deep in water – then on Reunion you will find a beach holiday 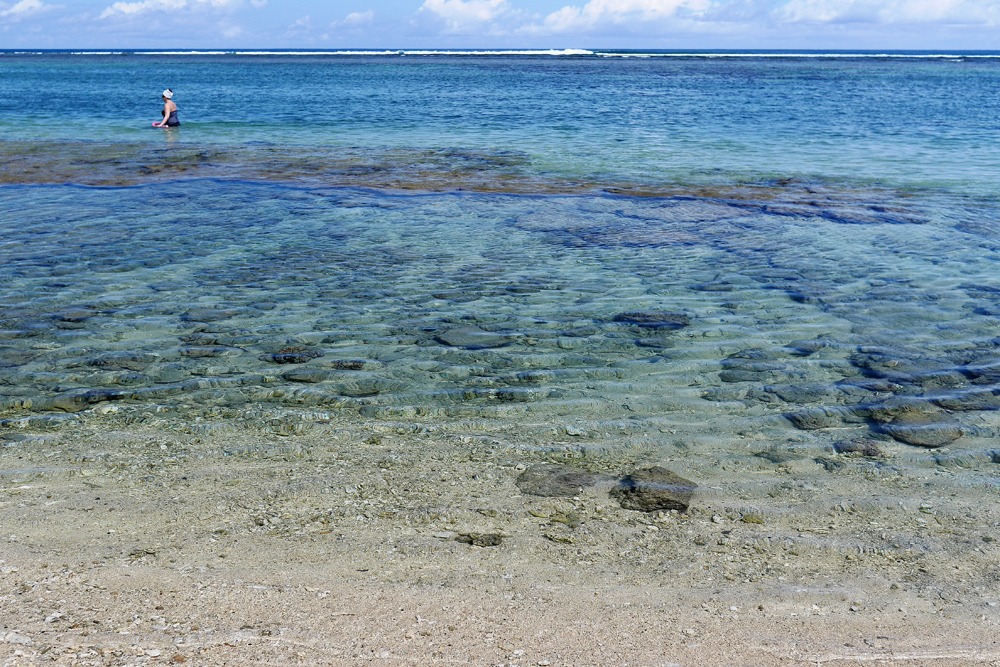 In other places to swim is not recommended – statistics say about constant attacks of sharks on daredevils and surfers. And when diving from a rock – God forbid – the surf will smash you with black pumice frozen lava. 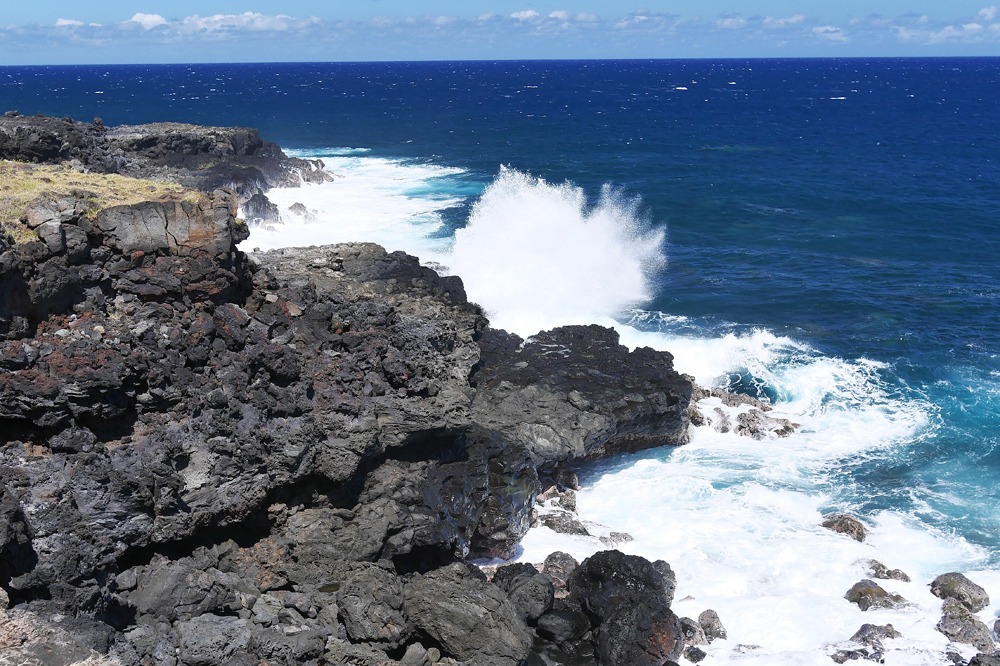 The choice of housing on the island, oddly enough, is very mediocre. It is dominated by apart-hotels or private hotels As the French tend to do – the living space in the rooms is limited to a small area.

But you can pick up something: the proposed housing options on the island of Reunion Also, you can look at what is offered on Reunion private individuals on Airbnb – usually it’s also apartments or houses

We stayed at the Résidence Tropic Appart Hotel – it’s better to stay on the second floor, a family apartment. On the first floor you can stay for one night. Cottages at Iloha Seaview hôtel – not a bad choice and quite picturesque, as a bonus they give binoculars to look at whales (who likes to peep). 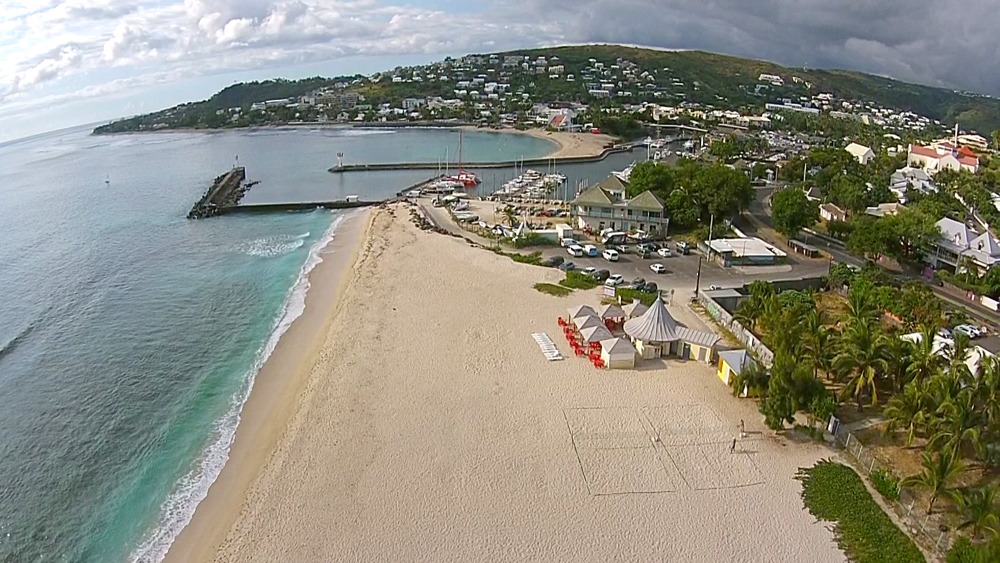 What to see on the island of Réunion

People do not come here for the beaches, but for the views. To see the volcano you have to take the road, which is called the “road of 400 turns,” and then a 5-hour hike. To see the rock complex “Three Slaves” you will have to drive a little more turns, many waterfalls you are unlikely to get to…. 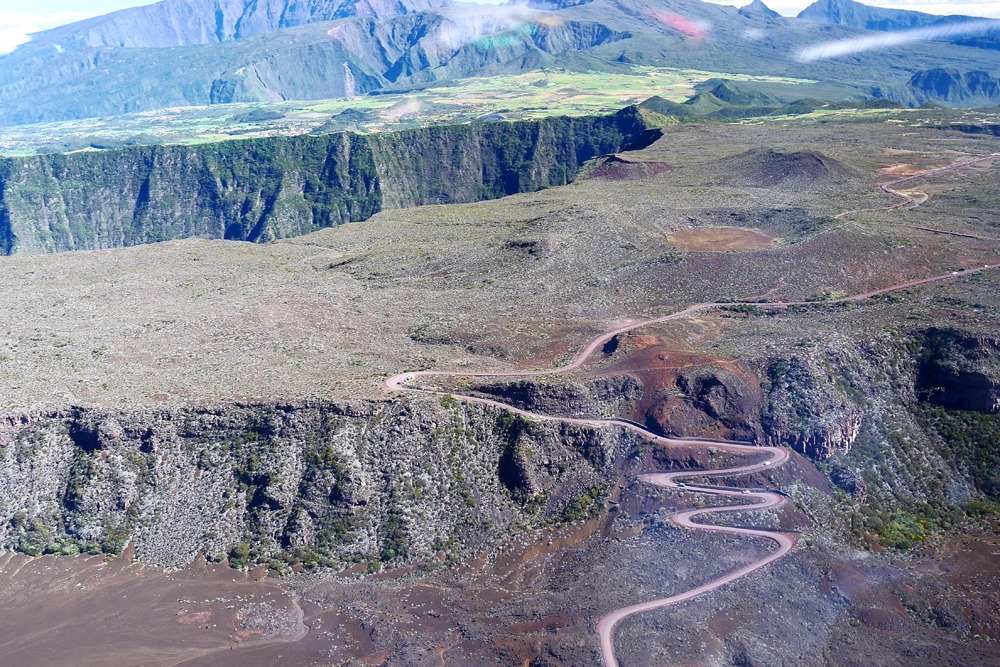 But there is a way out – see all the sights of Reunion from above for an hour and go to a more comfortable place – for example the island of Mauritius or the island of Nossy Be (Madagascar) About how to rent a helicopter to fly over Reunion Island I will tell separately: Over the island of Reunion by helicopter 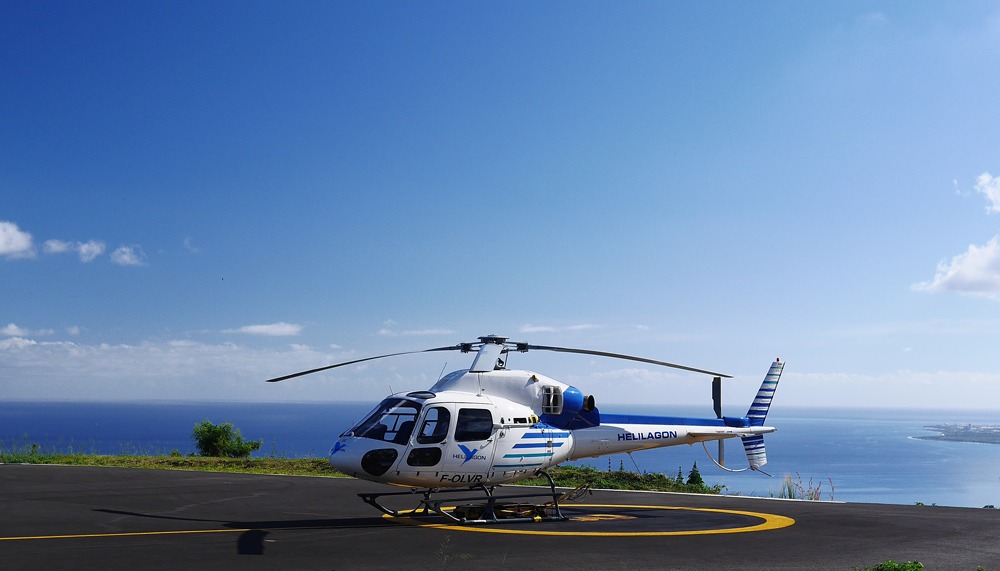 If you liked this article – share the link to it with your friends in social networks. Buttons below.