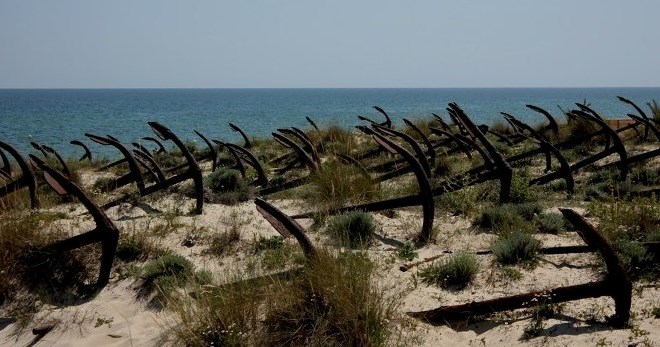 Portugal’s Anchor Cemetery stretches across the sand dunes of Barril Beach on the island of Tavira. Lined up in rows with almost military precision, hundreds of rusty anchors commemorate the long-lost tuna fishery in southern Portugal and the generations of fishermen whose livelihoods disappeared along with the fish.

An Irony of Beauty

When you come to the island of Tavira (Ilha de Tavira) in southern Portugal, you’ll find a picturesque coastline. Part of the Ria Formosa Reserve, this island boasts some of the best beaches in the Algarve and is 11 kilometers long. Some of these beaches are frequented by nudists.

Take a few steps back from the beach and you will find a curious sight among the shifting sand dunes: a graveyard of anchors. Buried in the sand several hundred rusted from years of use and the same years under the scorching sun, anchors lie on their sides, one hook submerged in the sand and the other outward, creating a bizarrely bleak landscape on the beautiful coast. 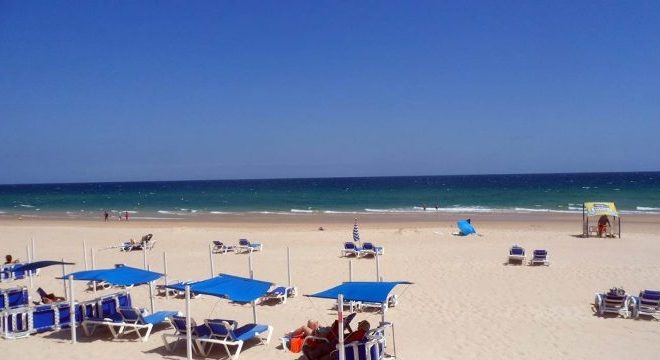 There are no forbidding fences in Portugal’s anchor cemetery, no signs as to who created it and for what purpose. Only the descendants of the fishermen who have fished tuna in these waters for generations keep the memory of those fertile times alive. The harsh and unpredictable waters, where the Atlantic Ocean meets the Mediterranean Sea, prompted a unique technique of catching this fish, probably invented by the ancient Phoenicians.

Anchors look similar to those used to hold small vessels, but they were used for a different purpose. Instead, fishermen traditionally used them to hold their huge funnel-shaped nets in place, both against the force of the sea and for good catches. The tuna is a fierce predator that feeds on small fish and has always lived in these waters until humans came here.

A memorial to irretrievable loss

Fishing over the centuries and desperate competition among fishermen eventually led to the bluefin tuna population disappearing irretrievably. There was no longer a need to hold nets designed to catch the depleted resource. The fishermen abandoned their small village near Barrill Beach in 1968. Its small houses were later rebuilt, and others housed restaurants and other establishments serving the beach.

Anchors, on the other hand, found their place in the dunes of Tavira Island to become a collective memorial to a lost way of life. Loss and loneliness are what define cemeteries of all types, including the anchor cemetery. But if you try, you can also find something beautiful about it, like the Portuguese fado songs. 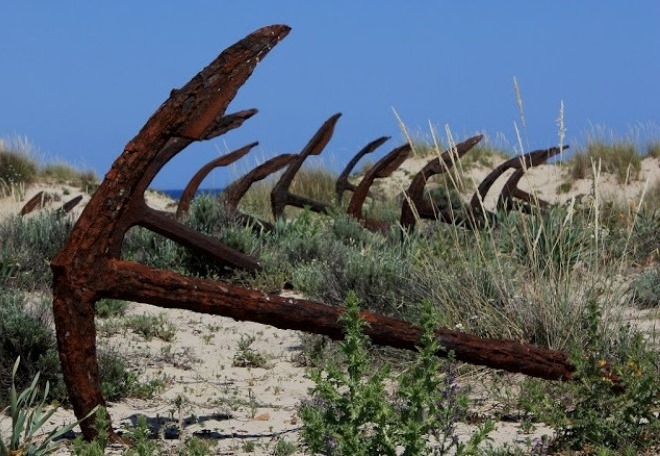 How to get to the Anchor Cemetery at Barril Beach in Tavira?

To get here, you have to cross a bridge over the mouth of the river. You can take another 1 km route around the island in two ways: 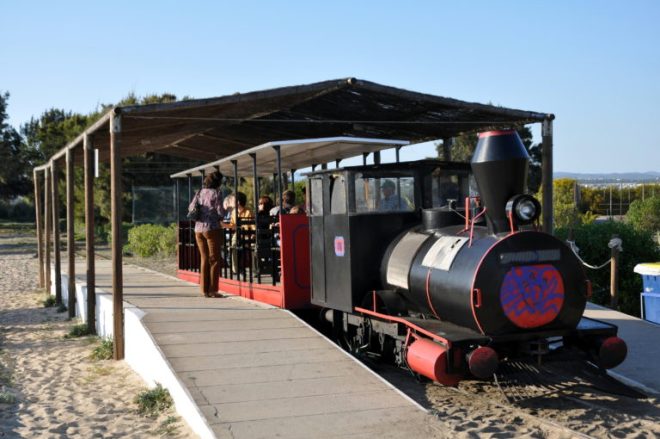 Anchor cemetery on the island of Tavira. Portugal

Tavira is a small but lively port town on the Atlantic Ocean in the Algarve region of southern Portugal, surrounded by orange, fig and almond trees. It is known for its beautiful beaches located on the very elongated island of Tavira (originally Ilha de Tavira). 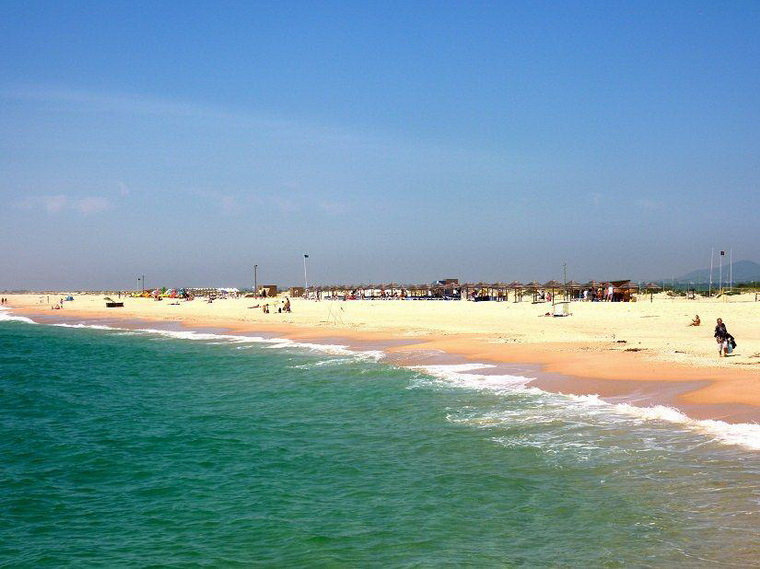 Beaches of the island of Tavira

The island of Tavira, about 11 kilometers long and 150 meters to 1 kilometer wide, is cut off from the continent by a narrow, 50 to 200 meters wide strait. From above, the strait resembles an ordinary river. The island stretches from northeast to southwest.

READ
Cave of the Winds in Tenerife. Attractions in Canary Islands. 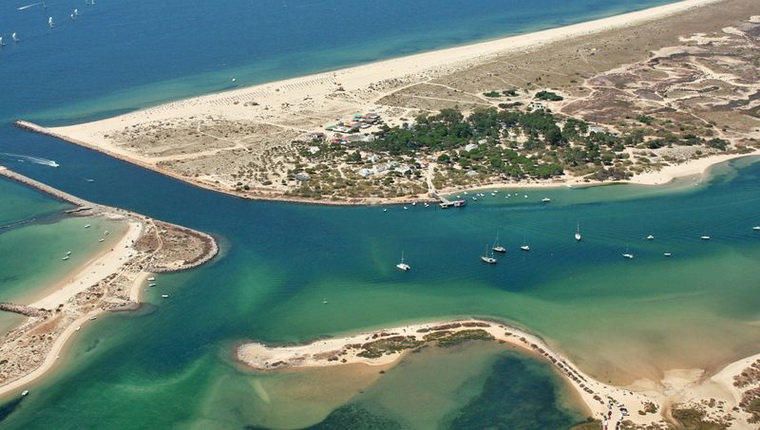 The eastern part of Tavira Island. View from the continent

The beach on the island reaches a width of 100 meters and is formally divided into several parts. Beginning from Praia da Ilha de Tavira (Mar) in the east, the stretch of sandy beach, straight as an arrow, passes through the areas of Terra Estreita beach, Barril Beach, Praia da Ilha de Tavira – Barril (Praia Naturista) and ends with Barra da Fuseta beach in the west of the island.

All these beaches are worth seeing. They are not very crowded, but very attractive.

If you go to Tavira with children, Praia Naturista is not the beach to be visited because it is preferred by people who do not wear clothes and who want to be in touch with nature. They are usually dressed in Adam and Eve costumes.

We’ll take a closer look at Barril Beach. It differs from the others with the presence of the cemetery. Do not be alarmed, because it is the Cemiterio das Ancoras (anchor cemetery in Portuguese). 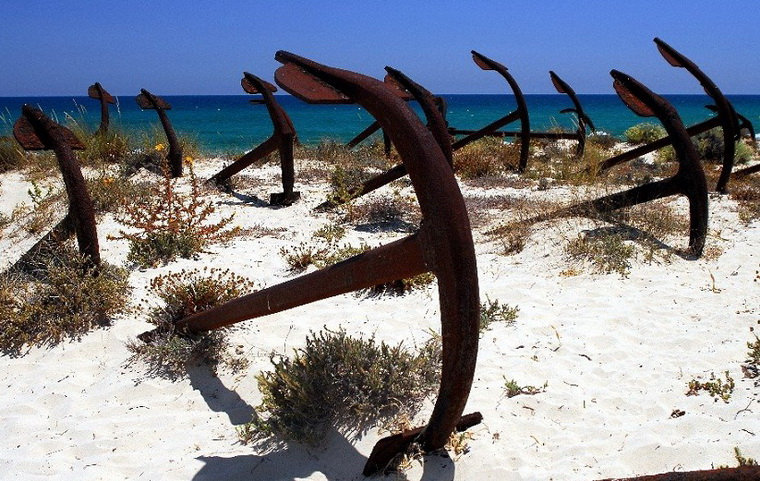 Massive, rusty, old anchors that look like two-legged admiralty anchors are stuck with one end in the soft and pliable sand. From a distance it looks very much like a big pickaxe in the sand. In all, several hundred anchors rest here, arranged in even rows on the coast, just a hundred meters from the ocean. 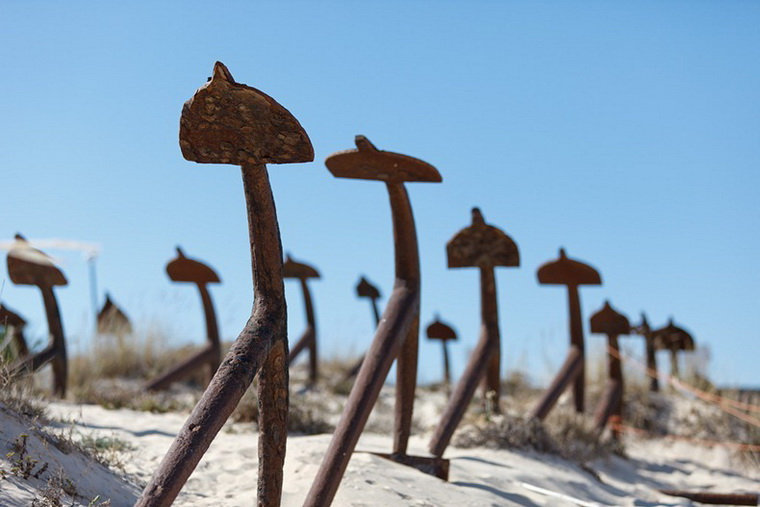 History of the Anchor Cemetery

For centuries, Tavira has prospered from the Atlantic bluefin tuna fishery in large volumes. Fishermen went out to fish hundreds of kilometers from home. The business was organized on an industrial scale. A fishing village was formed on the shore in 1841 with about 80 families. The people mainly lived by fishing for tuna during its seasonal migration from the Atlantic to the Mediterranean Sea and back. The Strait of Gibraltar is 200 kilometers southeast of the island of Tavira.

The process was rapidly evolving. Even a small railroad had to be built from one coast of the island to the other. It was used to transport caught fish. But because people were eating tuna much faster than they were reproducing, the fishing nets began to bring in fewer and fewer fish. Eventually, fishing ceased to be profitable, and the village was deserted by 1966. People left it in search of a better life.

History knows many settlements that thrived and then became abandoned overnight. The ghost town of Kolmanskop in Namibia, which quickly sprang up and was just as quickly deserted due to the diamond rush, is a good proof of that.

It is not known who first stuck an anchor in the sand, symbolizing the end of the era of prosperity of the settlement, but everyone else followed him. Having given up catching fish and dropping anchors, the inhabitants abandoned the settlement. Thus ended its period of prosperity. Anchor graveyard – a monument to the fishermen’s past

The difference between an anchor and an anchor, or how they fished for tuna

If you think these are ordinary anchors used to anchor a ship, you are mistaken. These anchors were used for tuna fishing.

The unpredictable and strong currents in the Strait of Gibraltar forced the ancient fishermen to develop a unique tuna fishing technique. It is likely that this technology was invented by the Phoenicians before the Roman Empire.

Tuna and the ancient principle of catching it

The tuna is a very strong and large fish. His length can reach 4.5 meters, and weighs more than 600 kg. The very name of this fish came from the ancient Greek words “throw” and “cast”. Tuna is a predator that can reach speeds of up to 75 km/hour. It is very difficult to catch, and more importantly, to keep him. Additional difficulties are caused by the ocean currents in this region.

Anchors, though they look standard, were used to hold huge funnel-shaped nets in place. Fishermen built entire mazes of nets to guide the school of fish in the right direction. It was with the help of hundreds of these anchors that the nets withstood both the currents and the swarms of bluefin tuna they caught.

The fishermen and fishing industry have long since given way to hotels and tourists. The old fishermen’s houses have been renovated and converted into cafes and vacation cabins. But this strange cemetery remains a reminder of the past, carefully preserved by local residents.

At the cemetery of anchors there are no fences, no guards, no signs. With the departure of the last fishermen, the cemetery has ceased to grow, as the fishing industry here is virtually abandoned. 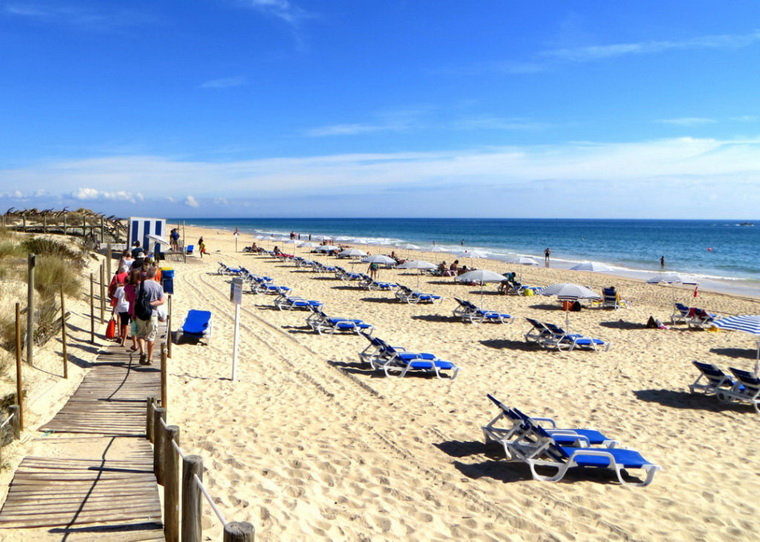 Look closely, on the left side behind the beach, there is a cemetery of anchors

It would seem that such a pile of scrap metal should give rise to someone’s insidious plan to steal and sell it. But that didn’t happen. To steal such a souvenir is extremely difficult, and at boarding the plane there may be questions. Tourists only come to look at this gloomy landmark, and the inhabitants of the island of Tavira have too much respect for their ancestors and do not even think about such blasphemy.

Now the island is rapidly developing tourism industry. The main income comes from tourists, and the anchor cemetery has become a landmark of the island. Tavira Island is a wonderful and quiet island. There are not even any cars and roads. It is practically one big beach. The only pontoon footbridge Ponte sobre a Ria is located near the beach with the anchors, on the opposite side of the island. Once across the island, you can walk or use the Comboio Pedras d’el Rei, the same railroad restored to transport travelers. Keep in mind, if you’re with children, you probably won’t be able to refuse a ride, because these trains are very similar to the attraction. Trip will cost 2 euros. 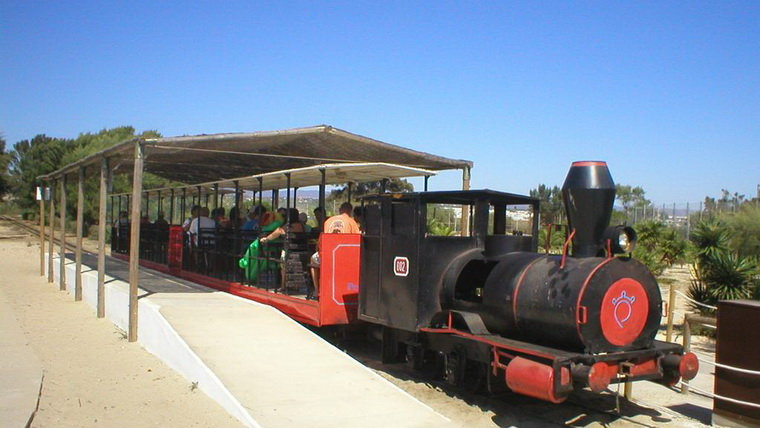 This train used to take the fish

In the eastern part of the island you can take a water cab in the town of Santa Lucia or from the pier Cais das Quatro Aguas. Ferries to the island run year round, except on bad weather days. Or generally rent a boat from the city of Tavira. But the best way is to rent a bike and take a leisurely ride to the island. The distance from the town of Tavira to the island is about 7 kilometers.