Kimberlite Pipe or the biggest hole in the Earth

Not everyone has heard such a rather rare phrase as “kimberlite pipe”. Even those who say these words are familiar to them are not sure they have the answer to what it is. Nevertheless, it is what stands at the origins of the jewelry industry and what we call diamonds. These minerals are extracted from huge “holes” in the ground, simply by looking at them, you stop treating the word “tube” as something small and almost toy-like. The history of this word combination dates back to Africa, and this method of diamond mining is really astonishing in its scale and the number of people who keep the mines running. Let’s get to the bottom of what it is and why entire cities are often built around such mines. Believe me, the scale will impress you and you will have something to discuss with your friends. At the same time, I will tell you what happens to these giants when it is no longer possible to dig them. 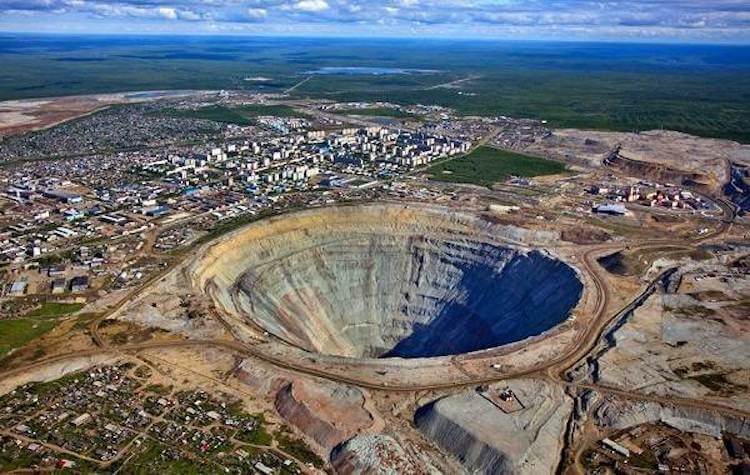 The size of kimberlite pipes is enormous.

What is a kimberlite pipe

First of all, it is necessary to understand that the kimberlite pipe is not some small object, which lies in the ground or is a tool of the geologist, but a full geological body. So it is customary to call the formations in the Earth’s crust, which have some specific properties or are of scientific and commercial interest.

A kimberlite pipe is usually called a vertical or at least close to vertical geological body, which is formed when magma bursts through the Earth’s crust. The tube itself is filled with kimberlite. Makes sense, right?

Who is the Tully Monster and to whom do the mysterious fossil remains belong?

That is how the rock and the tube itself is called because of the historical features of the discovery of such geological bodies. It first occurred in South Africa near the town of Kimberley. Since then, wherever such a pipe is located, it is always called a kimberlite pipe.

READ
Dead Sea, the saltiest lake in the world. 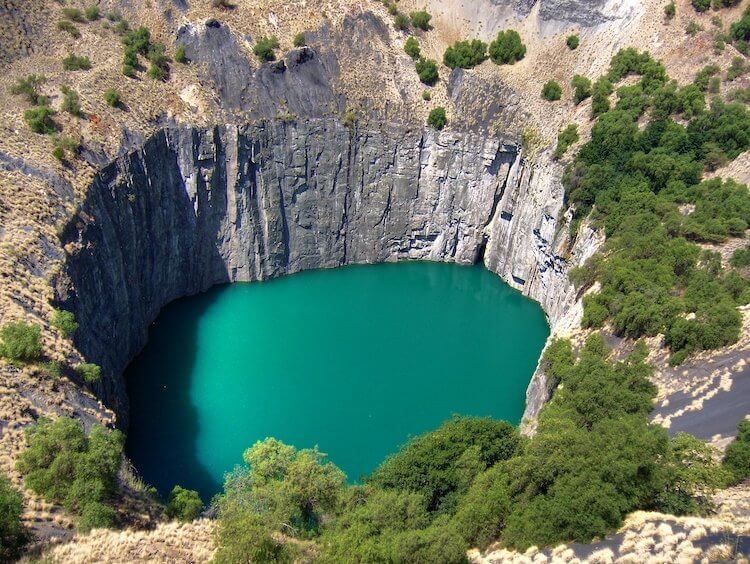 This is what the very first kimberlite pipe in the Kimberley looks like right now.

This geological body is called a pipe because it is really elongated and goes into the ground like a pipe. Given the peculiarities of geological processes, its size is enormous. Kimberlite pipe reaches a diameter of 400-1000 meters. Sometimes its size even exceeds these values. In fact, this is a channel through which in ancient times flowed gases and molten magma.

What is inside the kimberlite pipe

Outwardly, the rock inside the kimberlite pipe consists of volcanic debris, a tuff-like mass of greenish-grayish color and minerals distributed throughout it. The tuff-like mass is based on such substances as xenoliths, phlogopite, olivine, carbonates, pyrope and other minerals.

The most important thing that keeps kimberlite miners busy is diamonds. It is these small stones that are worth hauling millions of tons of rock from place to place in quarry trucks. When the diamonds are processed, the result is diamonds. Not so long ago, I already told you about how diamonds are mined and processed and gave some examples of the biggest and most expensive ones. At that time, the article was well received by our Telegram chat participants, who asked to learn more about kimberlite pipes. 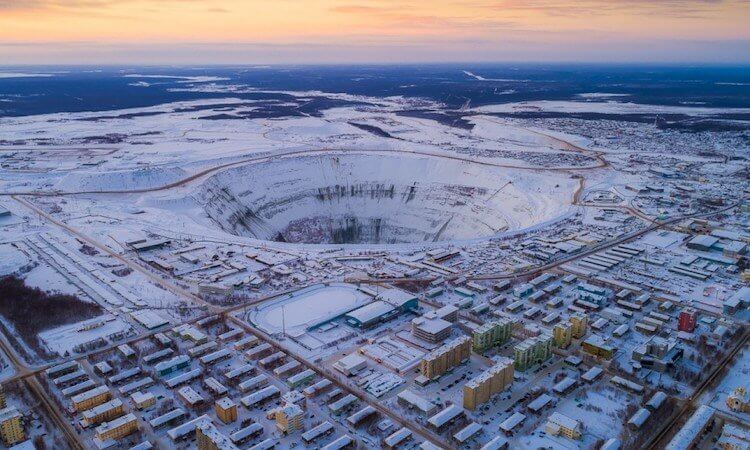 Everywhere you look, there is a pipe. Note that there is a stadium in the picture and appreciate its size against the background of this huge hole.

There are about 1,500 kimberlite pipes in the world, but not all of them are worth developing, because only one-tenth of them are diamond-bearing. Most of them are unprofitable, and the most useful in terms of “output” are in South Africa, India and Yakutia, on the Middle Siberian platform.

It is interesting that the first kimberlite pipe in Yakutia was discovered not by a bearded geologist but by a woman, Larissa Popugaeva. It took place on August 21, 1954. It was named “Zarnitsa.

The kimberlite pipe is such a large column that expands near the surface and narrows at depth. In fact, these are the echoes of ancient volcanoes. At the moment, their upper part is destroyed due to erosion processes, but the base and kimberlite pipes have been preserved. That is, many millions of years ago, these places were not so quiet and peaceful. But that’s when the Earth shared with us the diamonds, which are formed only at great depths under pressure thousands of times greater than the atmospheric pressure. Now it only remains for us to collect them. Of course, if the word “only” applies to such a titanic amount of work. 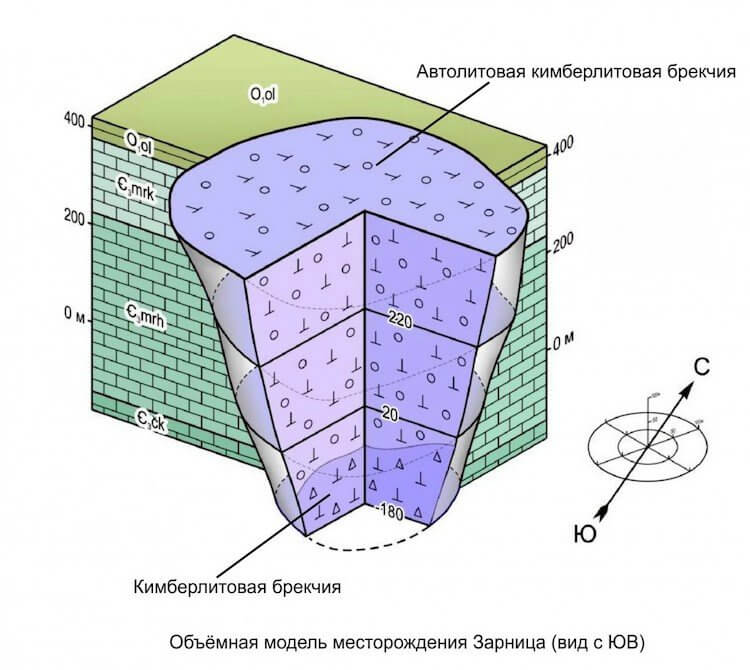 That’s the kind of volumetric model.

If you have diamonds at home, look at them and realize that they were at a depth of tens of kilometers from the Earth’s surface, were under pressure of thousands of atmospheres and spent tens or hundreds of millions of years in this state. Now they are used in jewelry. These are real messengers from the past that have come a long way to a ring, earring or necklace. It’s way cooler than meteorites.

How a kimberlite pipe is mined

To mine a kimberlite pipe, a funnel-shaped hole is gradually made in the ground, the depth of which reaches 600-700 meters, and the diameter of the upper part is often comparable to the size of a small town. When open-pit mining becomes impossible, mines are drilled around the “funnel” to a depth of up to a kilometer (and sometimes more).

How diamonds are mined and where they come from.

Through these mines mining continues as long as it remains profitable and as long as the minerals found in the rock can be sold for more money than was spent on mining. If the trend becomes reversed and the balance becomes negative, additional mineral prospecting will be attempted away from the sinkhole and mining will gradually cease.

READ
The warmest ocean in the world 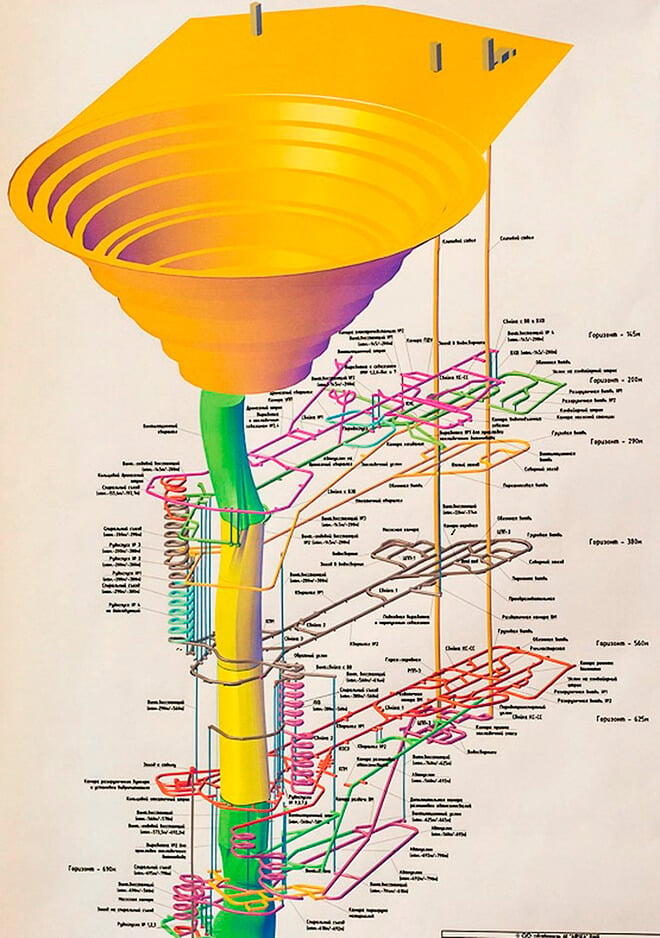 The names of the mines and tunnels around the tube are many, but they are not that important. The spatial structure is enough to understand what is going on there.

A mining and processing plant is built near the mine site to process the rock, and an entire town is built for the miners to live in, with all the infrastructure, entertainment, and even an airfield. Often these places can only be reached by air.

I talked about how mining and processing plants work and how diamonds are processed in this article.

Mining is often carried out by means of explosions. This is the most reliable, safe and inexpensive method, since even the open-pit excavators will not pull such a volume of rock. Explosives are placed inside the rock, after which it is collapsed and removed by huge quarry trucks to “extract the diamonds” from it. 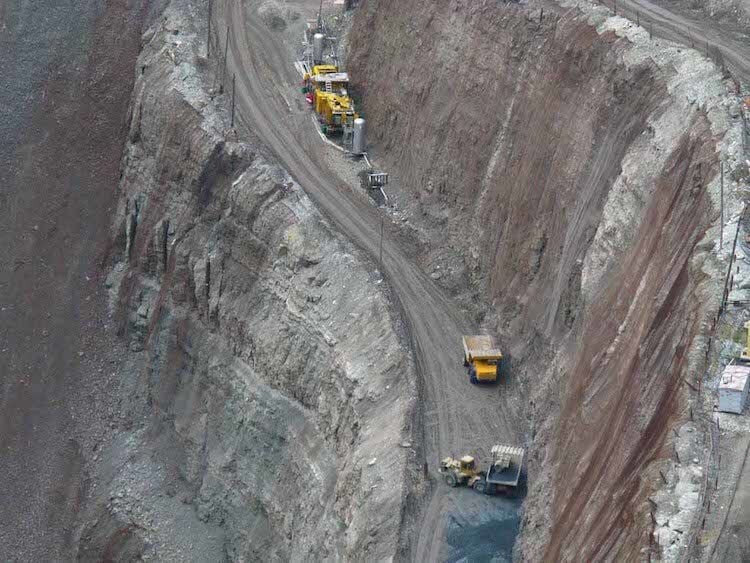 Against the scale of the quarry, the trucks seem tiny, but in fact they can crush a car or pickup truck and not even notice it (there were cases).

The largest kimberlite pipe in Russia

The largest deposit in Russia is Mir, which is located in Yakutia. Diamonds were mined there from 1957 to 2001. The subsoil user is the company Alrosa, and the volume of ore processed during this time was 68 million tons. Now this kimberlite pipe is no longer “working” and mining there has been stopped, but it was there in Soviet times that the largest diamonds were mined, which deservedly took its place in the ranking of the largest. 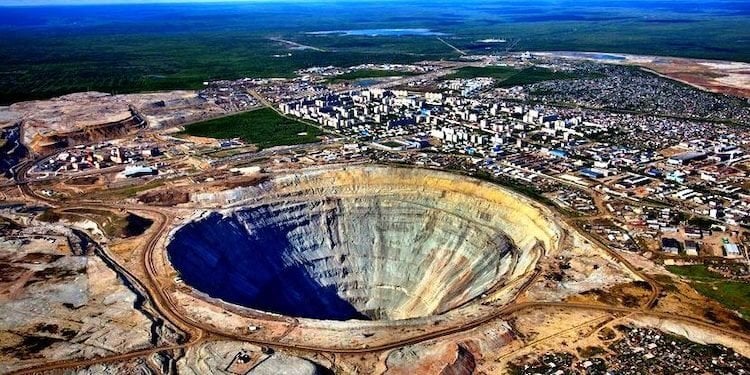 Despite the high level of automation in the process, a lot of people still have to be involved in mining. Perhaps soon it will take a couple of people at a computer to make these sites work, but that won’t happen anytime soon, nor will anyone come up with a working method for mining as efficient as the open pit method.

The 7 largest holes in the world that hold incredible secrets 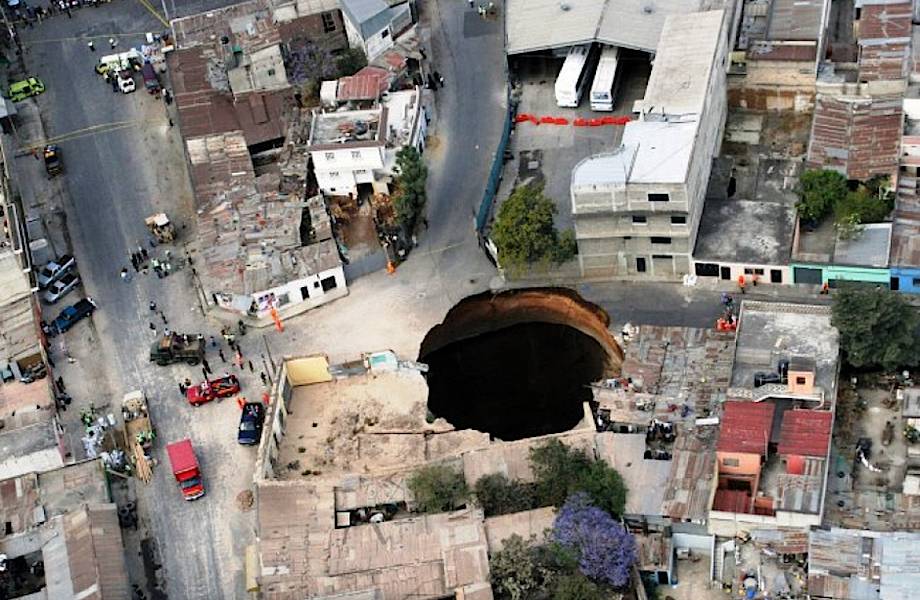 Our planet will never cease to amaze us. Humanity is constantly confronted with its astonishing abilities and features, with incredible phenomena. One of these phenomena is the huge holes that are periodically formed around the world. Some of them are created by humans, others appeared as a result of the most powerful forces of nature, but neither of them lose their mysteriousness, regardless of their origin. We’ve made a list of the most famous of these places and how they came to be. 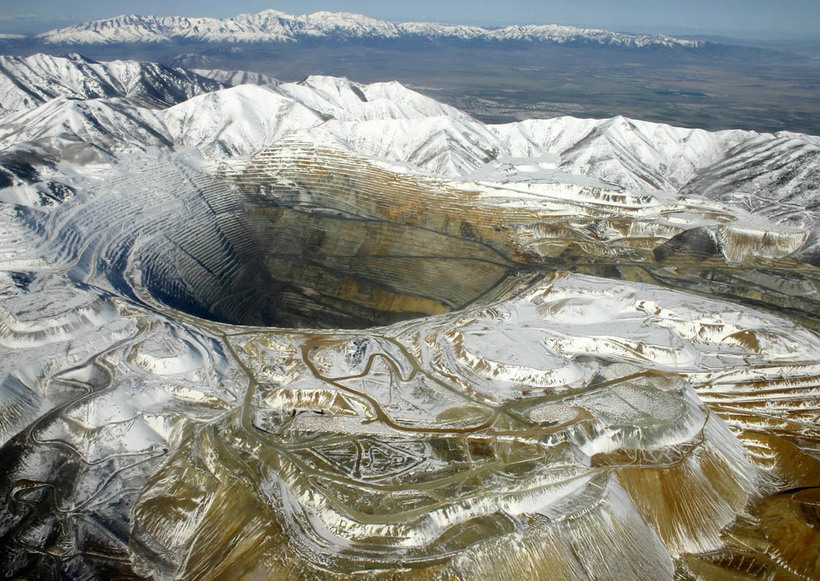 This canyon, located in the American state of Utah, is considered the largest man-made hole on the planet. It is 1 km deep and 3.5 km wide. The quarry is still in operation since 1863. Today, some 1,400 workers work here mining copper, extracting 450,000 tons of rock every day. 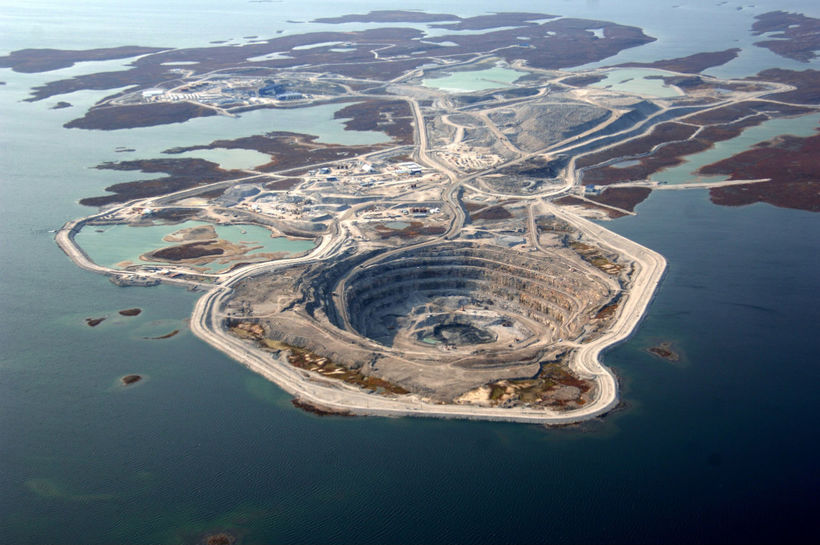 This diamond quarry is located in Canada. The mine was explored in 1992 and diamond mining began here in 2003. This place is one of the most important sites for the country’s economy, bringing in about 8 million carats of diamonds annually. 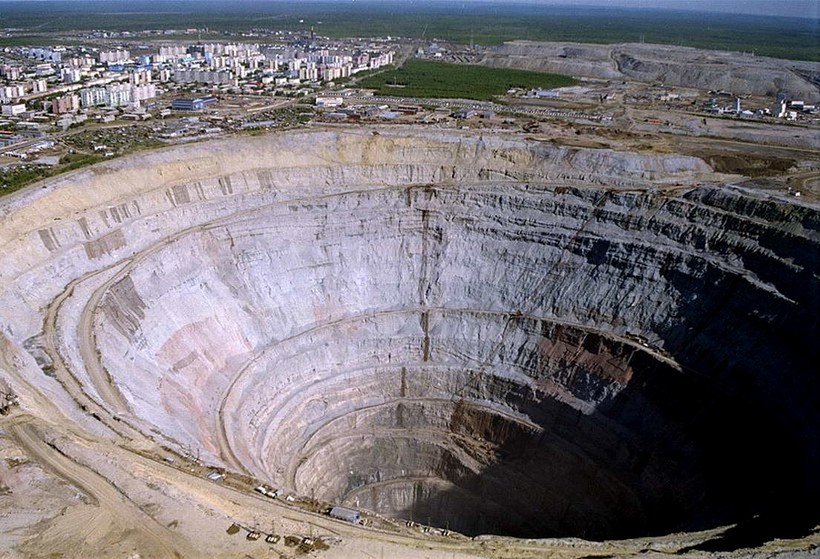 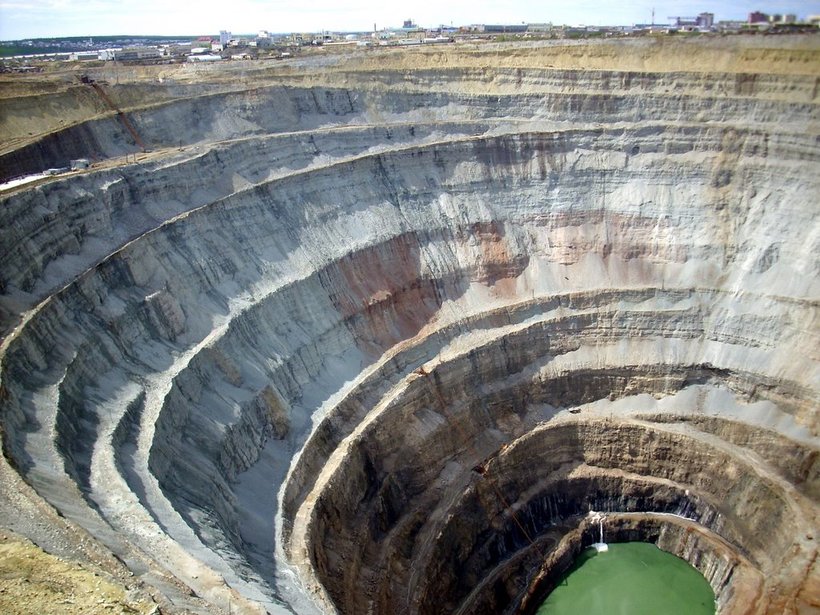 This huge hole, located in Yakutia, is 525 m deep and 1.2 km wide. It is called one of the largest open pits in the world. 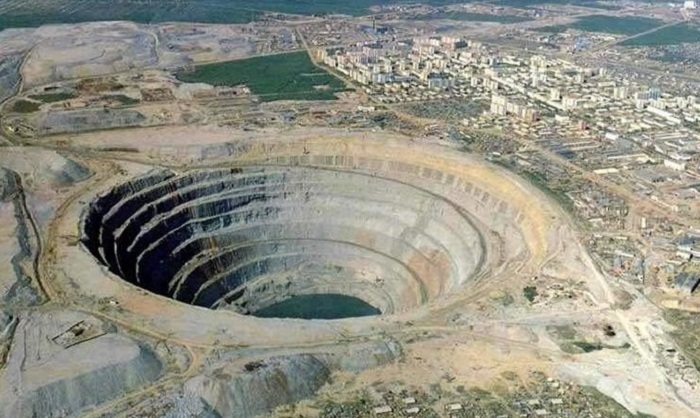 This huge non-functioning diamond quarry is located in South Africa. The hole is considered the largest of those made by man without the use of special equipment. There used to be the mouth of a volcano. 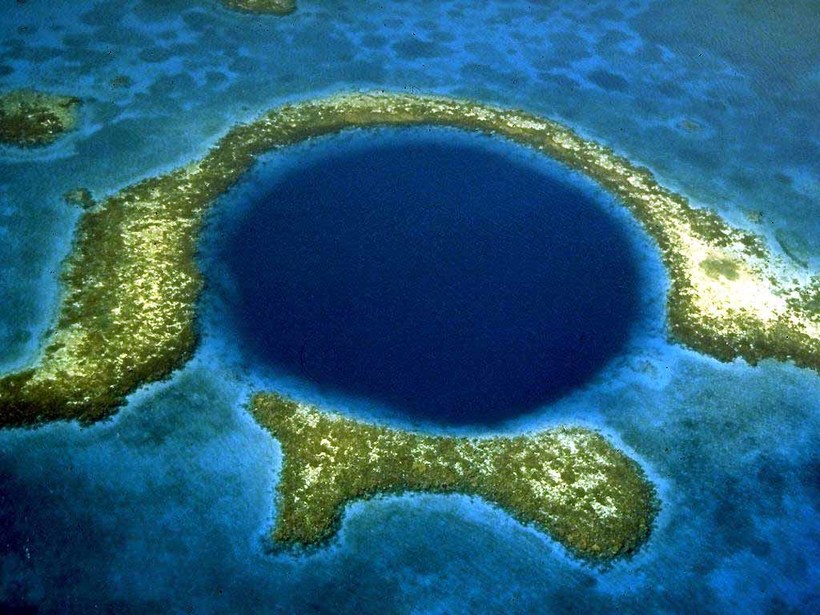 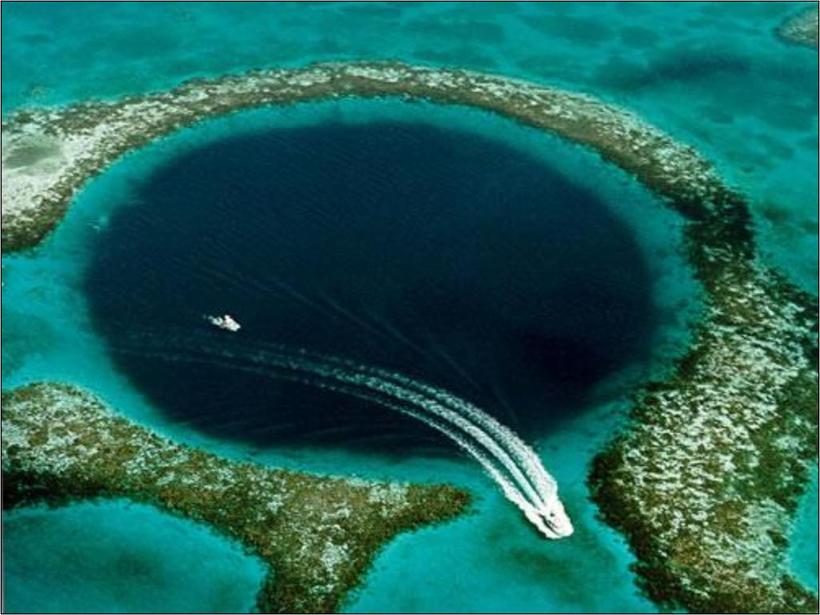 The Great Blue Hole in the Caribbean Sea is 400 m wide and about 160 m deep. It is considered the main tourist attraction in Belize and is one of the most popular diving sites. 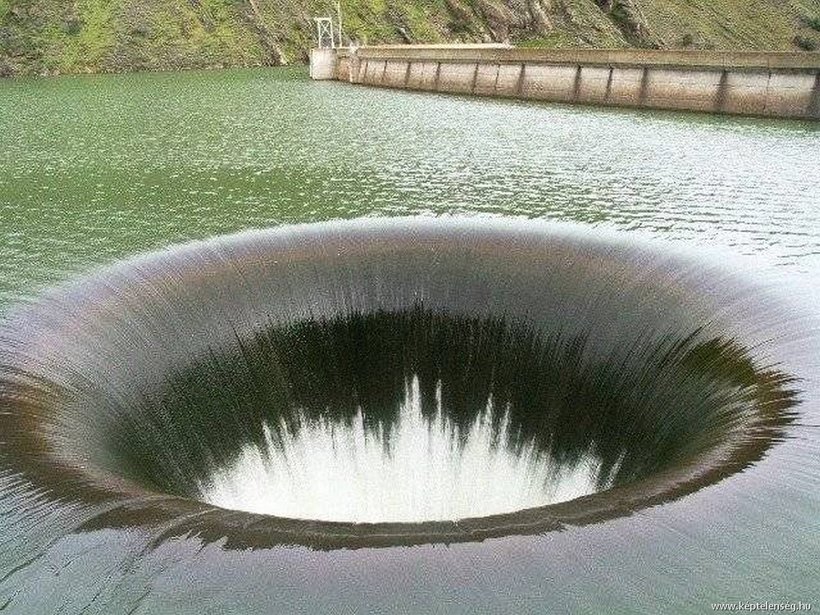 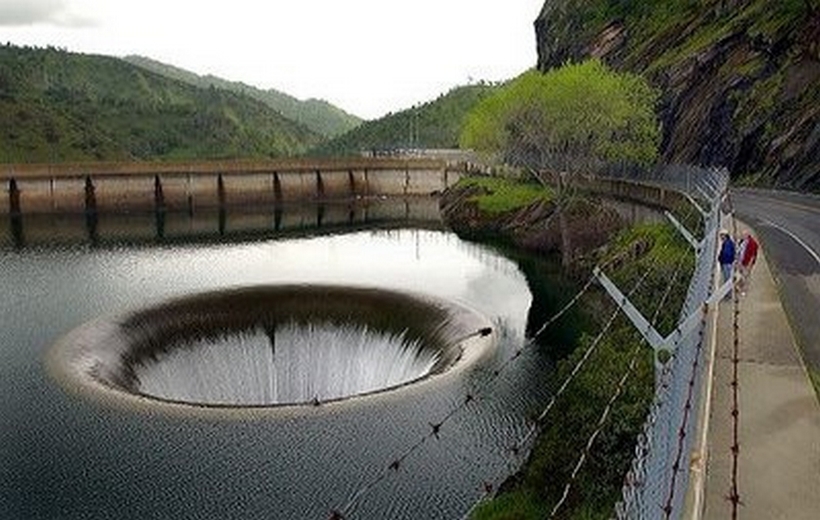 The largest reservoir on our planet is located in North Carolina, USA. It was created by people 55 years ago and is capable of flowing 1370 cubic meters of water per second.

READ
The 5 scariest rides in the world 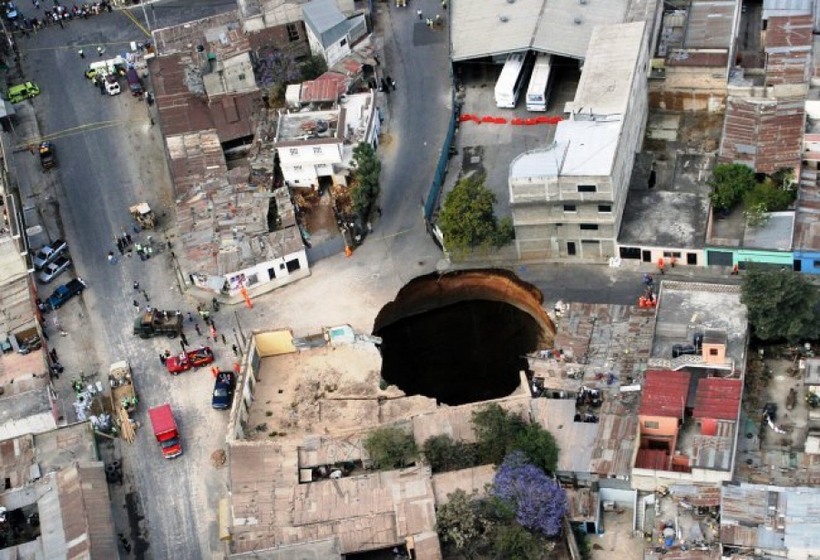 This sinkhole, 150 meters deep and 20 meters wide, was caused by groundwater and rain. It took several human lives and swallowed up houses.