Langkawi Island is located in the Straits of Malacca that mark Malaysia’s western border and is part of the Langkawi Archipelago. It is famous not only for its tropical location, but more for its suspension bridge. Officially it is called the Langkawi Sky Bridge. It is located on the western part of the island, 1,900 meters from the sea coast.

Langkawi Sky Bridge on a map

Any well-meaning tourist likes unusual places. Just palm trees and jungle is not a surprise any more. That is why travel industry workers are trying to lure whimsical traveler. In Malaysia, for example, have already built suspension bridges Kanopi, passing literally in the trees.

On the island of Langkawi, however, they went further. In order to attract tourists to the island, the authorities decided to build something that would draw the attention of fastidious travelers to this region. As a result a unique and incredible bridge was built here in 2004. It was built in the mountains of Gunung Machinchang (originally Gunung Machinchang). The only arched span of the bridge hangs from one and only one pylon. 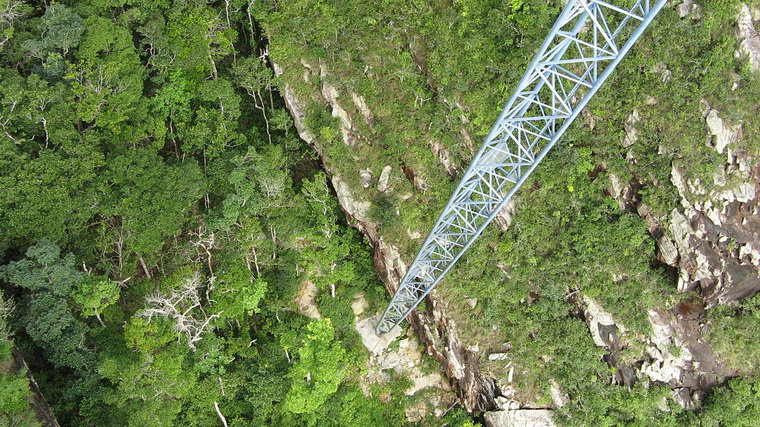 This is what the pylon of the sky bridge looks like

The structure of the Langkawi Bridge

The engineers and designers did a very good job. The bridge really is spectacular. You must say right away that Heavenly Bridge does not lead anywhere and does not connect anything, it just hangs over an abyss at a height of 100 meters above the ground. Its length is 125 meters. The outer points are on the mountain tops, and here is the only span in the form of an arc suspended in the air on a pylon 82 meters high.

Eight strong and reliable steel ropes depart from the pylon, holding the entire structure suspended. The pylon itself is tilted at an angle of 78 degrees and is supported by two powerful cables. The bridge is only 1.8 meters wide, but it can hold up to 250 people at a time. The absolute height of the Langkawi Sky Bridge is 660 meters above sea level. 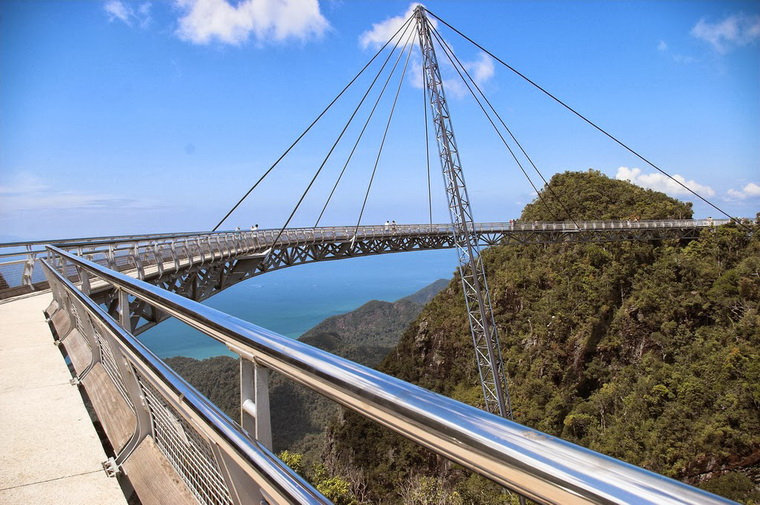 Man is not given to fly, but this design allows you to feel as if you are flying. That is the feeling you will get during the walk, don’t doubt. Sometimes, during fogs, the bridge literally floats in the sky, not for nothing it is called Heavenly. 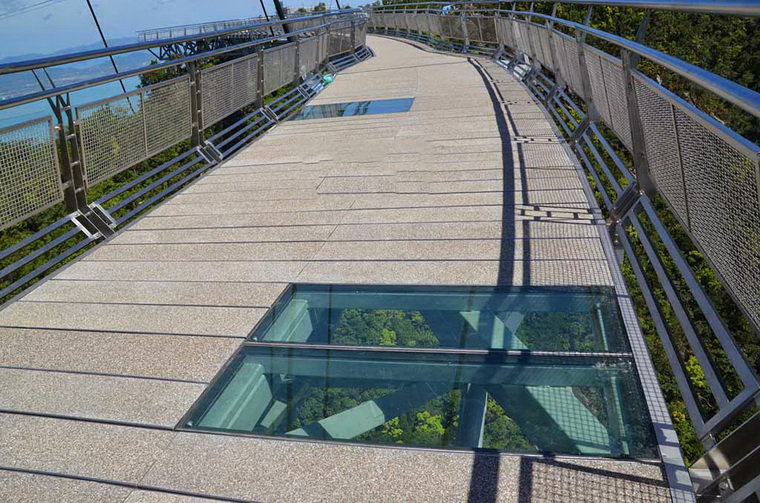 The glass windows in the Heavenly Bridge

And if you like these kinds of views, and your soul does not tend to take a place in your heels, then be sure to visit or at least read about the Hero’s Bridge in China. It is a bridge whose floor is made entirely of glass. Why the Hero’s Bridge? Because only heroes can cross it.

Despite the appearance of airiness and lightness of the Heavenly Bridge, its construction is very well thought out, reliable and meets the highest safety requirements. But the bridge can pose a threat during thunderstorms, as the probability of lightning strikes is quite high. During thunderstorms the bridge is not accessible.

How to Get to Heavenly Bridge

To get to Langkawi Heavenly Bridge, you must first get to the island. Then come to Oriental Village (original Oriental Village). Here begins the journey directly to the bridge. The funiculars, which pass through two observation decks, and an inclined elevator take you to the southern end of the bridge. Continue on foot across the bridge to the northern end, never tiring of admiring the views and snapping your cameras along the way.

READ
The Dead Sea - the lowest point on the planet 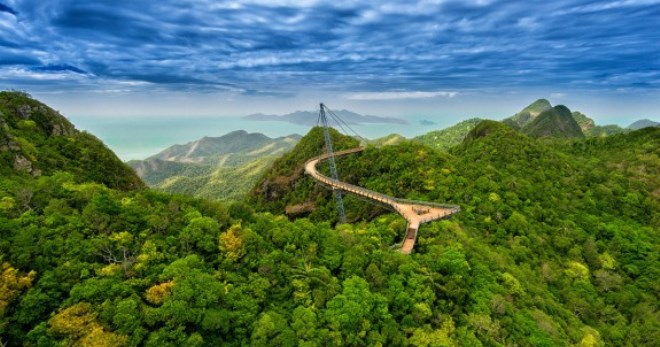 There are many beautiful places on earth, but an amazing paradise that you’ll never want to leave is Langkawi Island, located on the northwest coast of Malaysia. Nature has generously blessed this place with all the earthly pleasures of a clear azure sea, white sandy beaches, mild climate and lush tropical greenery.

But people have made their contribution. So that it was possible to enjoy the surrounding nature in full from the bird’s-eye view, it was conceived to build a bridge, but such a bridge, so it does not burden the natural beauty of the island. And the idea succeeded in full measure! The bridge was named Langkawi Sky Bridge. 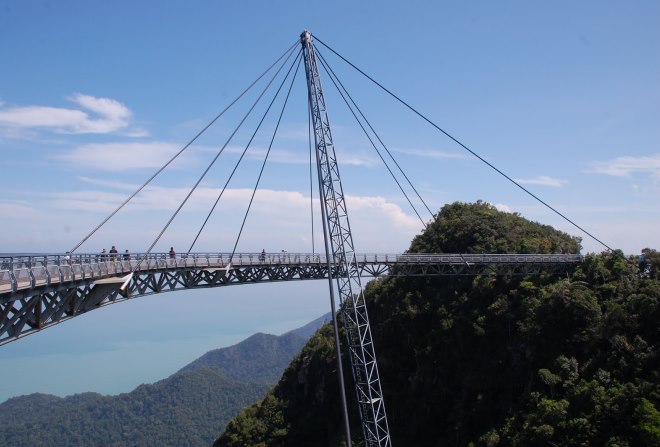 Construction of the bridge

The Langkawi Sky Bridge is the highest feat of engineering in Malaysia. The cable-stayed footbridge spanning the gorge came out with an interesting curved shape and now proudly towers over the mountains. 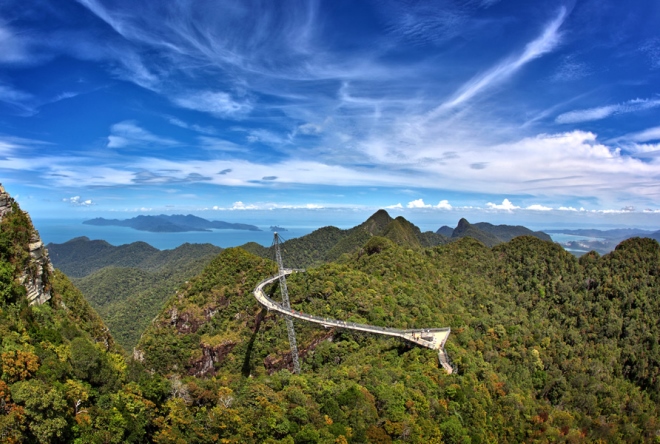 The Langkawi Sky Bridge was built in 2004 and has been open to visitors since 2005 and is unique in that it is the highest single-support bridge in the world. The bridge actually rests on a single metal pylon. All the power of the structure is firmly and reliably distributed among eight cables, attached to the same single support. It looks like it literally hovers over the abyss, and on very windy days it sways a little, too. 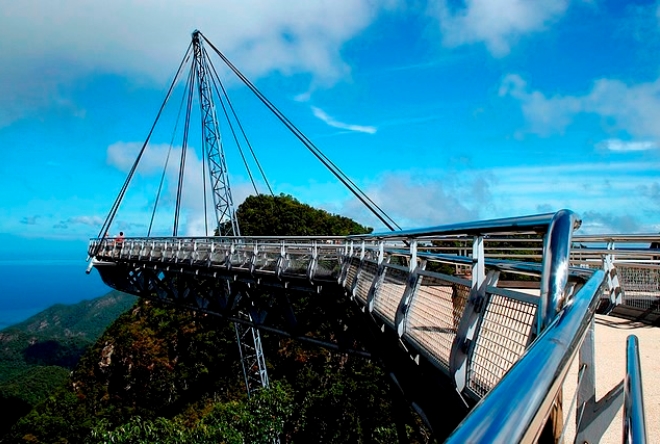 At first glance the Langkawi Sky Bridge seems unreliable, but safety came first in its design and construction. There’s no need to worry about it falling: the bridge is perfectly safe for people. The designers even provided several escape routes in case of bad weather, lightning or other natural surprises. On the upper level, double steel railings were installed, and below the level of the parapet, wire nets and wood decking were stretched. 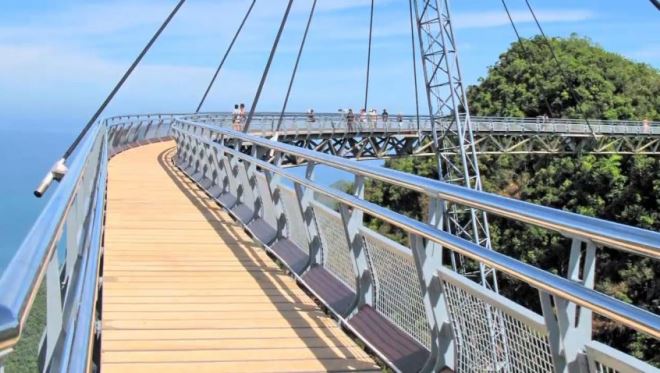 A visit to the Langkawi Sky Bridge is a must on the island vacation program. With a length of 125 meters and a width of only 1.8 meters, it connects the peaks of the Gunung Mountains. There are triangle-shaped platforms on the edges of the bridge, convenient places where you can stop and admire the stunning views of the island. And the views are truly stunning: on the one hand the azure Andaman Sea and lush rainforest, and on the other – all the splendor of the mountains and the adjacent southern islands of Thailand. And since the Langkawi suspension bridge is curved, you can admire all the beauty of the island from different angles.

READ
Miraikan is a museum of the future in Tokyo. Japan. Description, photos. 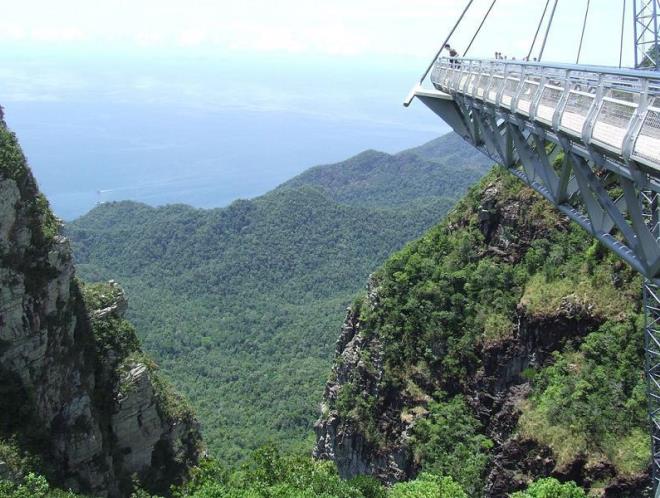 Some interesting facts about the bridge:

Langkawi is a small island with good roads, understandable interchanges and signs. You don’t need to buy a tour, you can simply rent a car or a motorcycle and rush ahead for the experience. The Langkawi Sky Bridge and the Langkawi Cable Car are popular attractions on the island. The cable car deserves a special mention as it is the only way to get up to the bridge. It consists of 2 sections with a length of 2.2 km. 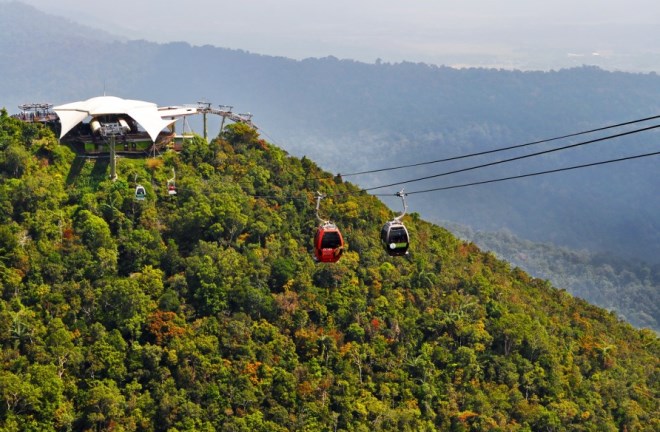 To get to the cable car you need to go from Chenang Beach along the sea to the west. Your landmark is Oriental Village, located at the foot of Machincang Mountain. From here you will climb to the first lookout point, then walk to the second one, which is right on the bridge. It takes about 20 minutes to climb the entire climb, but it is time well spent compared to the surrounding beauty seen from the top. 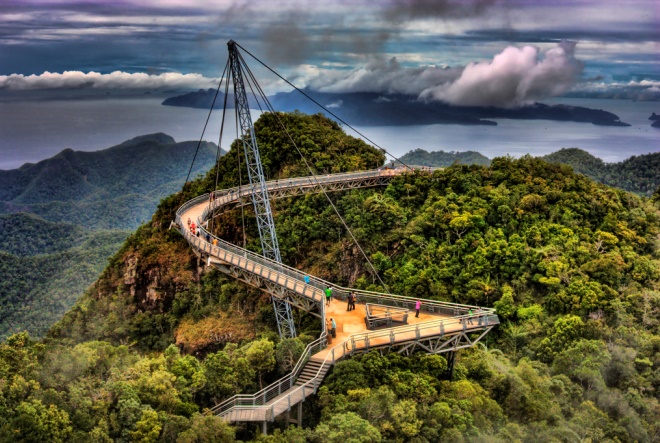 Admission to the Oriental Villige, which is a large amusement park, is free. But you will have to pay for the climb. It will cost $7 for adults and $1.63 for children. Those who do not like to wait, can in the village or at Langkawi Cable Car complex to buy a VIP pass for $11.66 and pass everywhere without queuing. At the entrance of the food and water will be taken from you, they are stored in a special box until your return.