The Marble Mountains are one of the most famous sights in central Vietnam, and simply a must-see if you are staying in Da Nang or Hoi An. Moreover, even if you have been here a few years ago and come again, probably will not recognize much, because everything has changed a lot for the better: there are new caves and beautiful lighting inside. The truth and the popularity of this place has increased, and in the middle of the day here is literally packed with tourists from China.

The Marble Mountains consist of five stone hills. They used to be islands formed of marble when everything around them was covered by water. Later, when the water left, the hills left natural caves in and around which Buddhist sanctuaries and temples were built. The largest of the mountains, Thuishon (Ngon Thuy Son), is still a popular destination for pilgrims, and each of them, according to local beliefs, means one of the five elements of the universe and has a corresponding name: Thuishon (Water), Mokshon (Wood), Hoashon (Fire), Kimshon (Metal) and Thoshon (Earth). 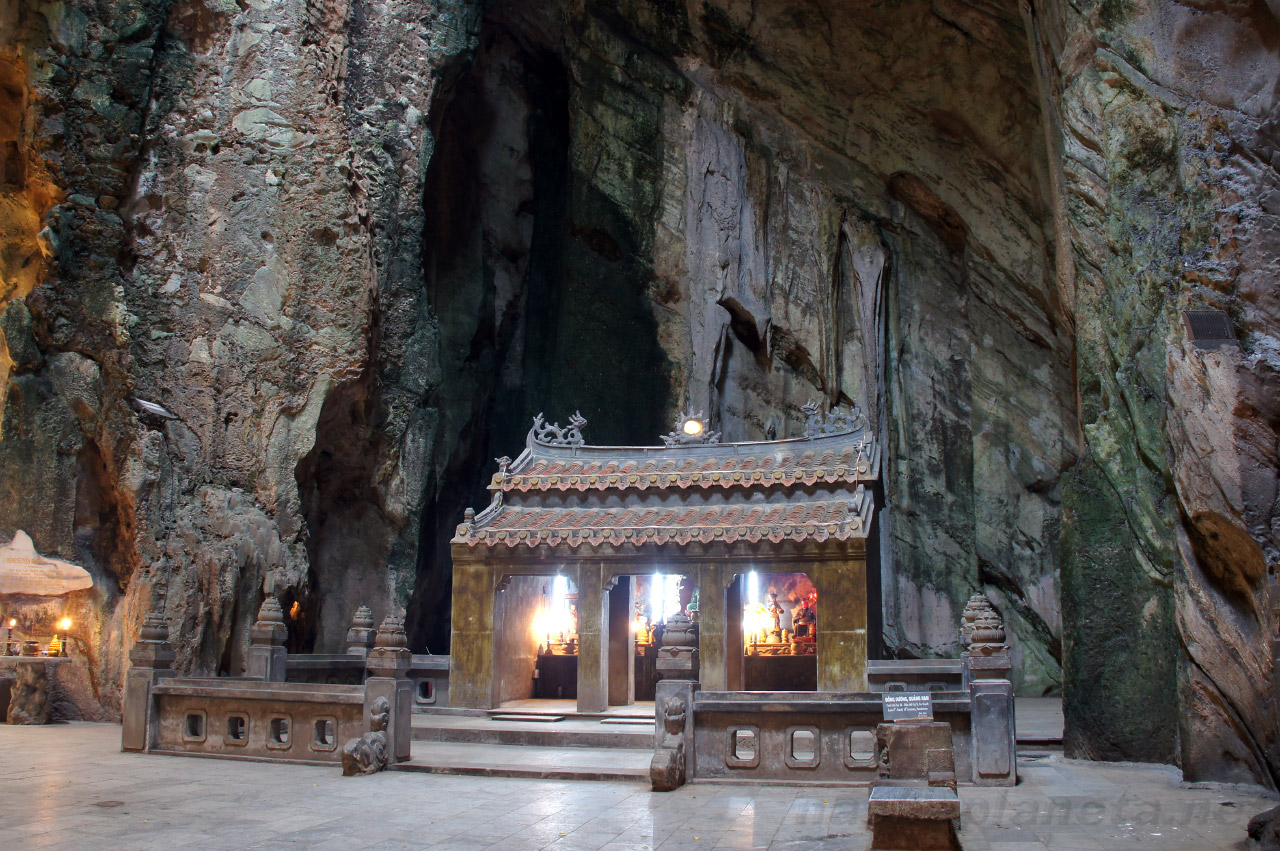 The Cave in the Marble Mountains

Thuishon Mountain (Ngon Thuy Son or Water Mountain) is the only one equipped for tourists to visit: paths and steps, rest areas, and decorative lighting in the caves have been built. And let the name “Marble Mountain” not mislead you, in fact, you can visit only one. You will not need much strength to climb the mountains, they are not that high. But it is better to save time, because you will need at least two hours to see everything. If you want to save energy, you can use the newly built elevator to ascend and descend, but you will have to pay another VND 50,000 to the entrance fee which we think is definitely not worth it. 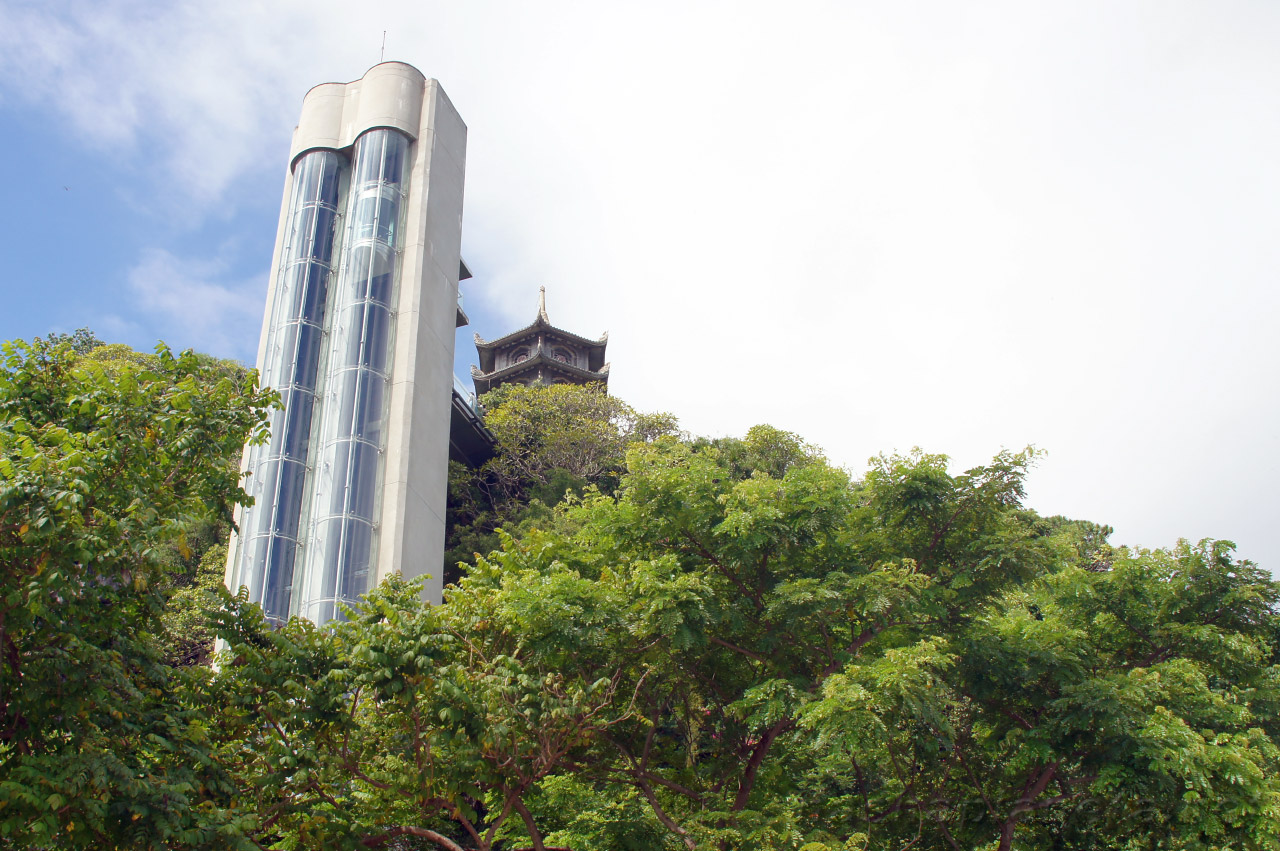 Elevator to the mountain

On the mountain you can visit several caves with shrines and temples and climb one of the two observation decks. Especially interesting one observation deck, the entrance to which is made through the cave Van Thong Cave on a very steep and narrow passage, which can not be overcome by everyone. There is also a viewpoint of Highest peak, which offers an excellent view of the sea and not so great view of the surrounding mountains, construction sites, but to enjoy the views, you need a good weather. To avoid getting lost along the way, there are signs and maps everywhere. In addition to the caves, you will see various Buddhist pagodas and temples along the way. 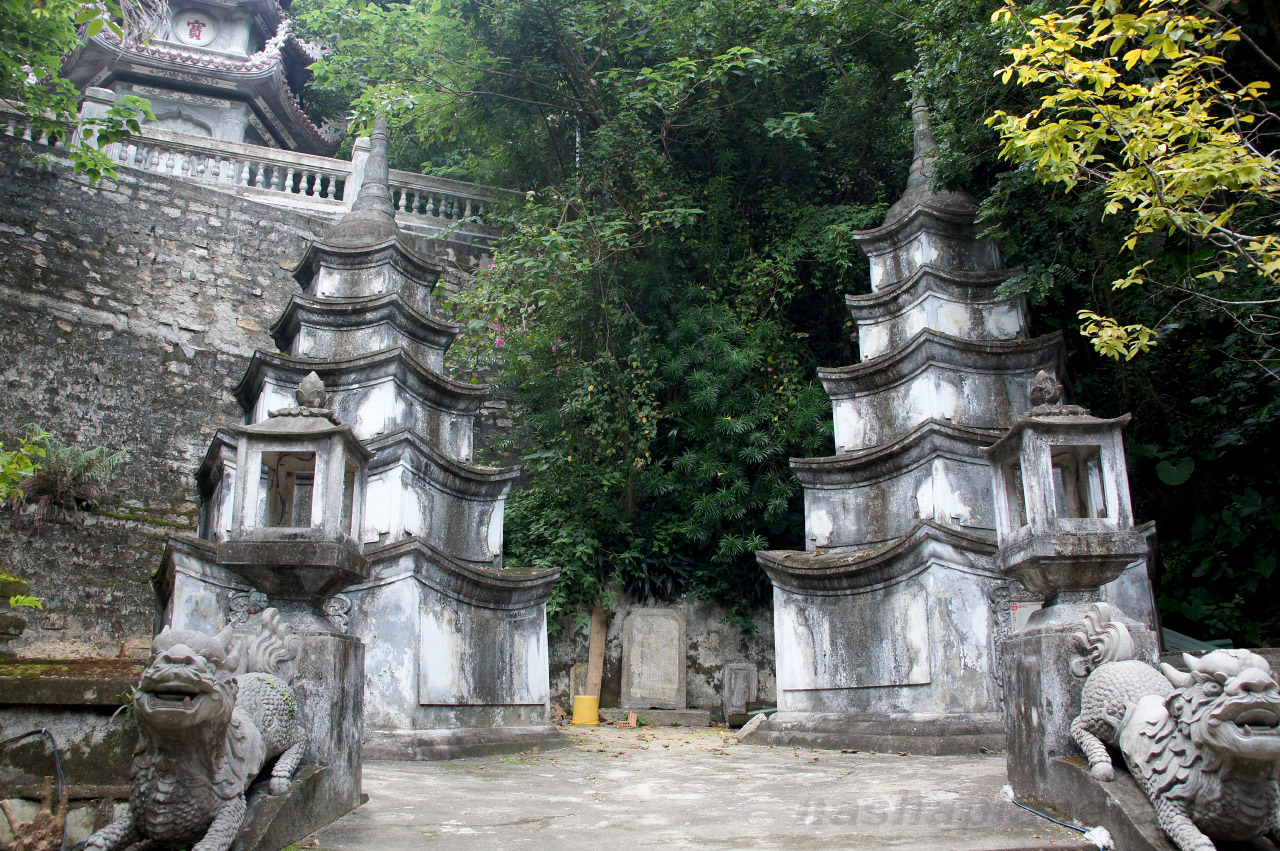 In addition to the Marble Mountain trail proper, there is another cave, Am Phu Cave, known as Hell Cave, but there is a paid entrance and it is separate.

At the foot of the mountains are two villages of stone carvers. The most famous is the village of Non Nuoc, where you will be greeted by many shops with countless figurines, figurines of all kinds, jewelry, and even dishes made of marble. You probably won’t find so many marble articles anywhere else in the world. The prices are more than acceptable, but you have to bargain, and sometimes very much. If you choose any serious sculpture here you can arrange its delivery by sea to any part of the world.

How to get there : The mountains are on the outskirts of Da Nang on the way to Hoi An (mountains on the map). The easiest way to visit them is to buy a group tour from Da Nang and Hoi An, but in Da Nang it will be difficult to find a tour because the city’s infrastructure is not yet designed for European tourists.

Inexpensive to get to the Marble Mountains on city buses. From Hoi An it is bus #1, from Da Nang # 1, 11, N1. From Hoi An, the #1 bus leaves from the bus station on the outskirts of town, and in Da Nang you can take them at one of the many stops (see Da Nang city buses). However, be careful when using the route #1, which is “famous” for cheating tourists on the fares.

If you use a rented vehicle, you will have to park it either for VND10,000 at the official parking lot at the entrance or for free near one of the stonecutters’ shops. Even at the entrance you will be caught on the road local vendors (mostly women) and invited to their free parking. It is really safe to leave your vehicles with them, but on your return you will be hard pressed to buy anything from them and it will be very difficult to get rid of them. So if you don’t intend to buy anything firmly here, it’s best to pay for official parking and then leave quietly.

Marble Mountains, Da Nang. What’s behind the beautiful name and is it worth the trip 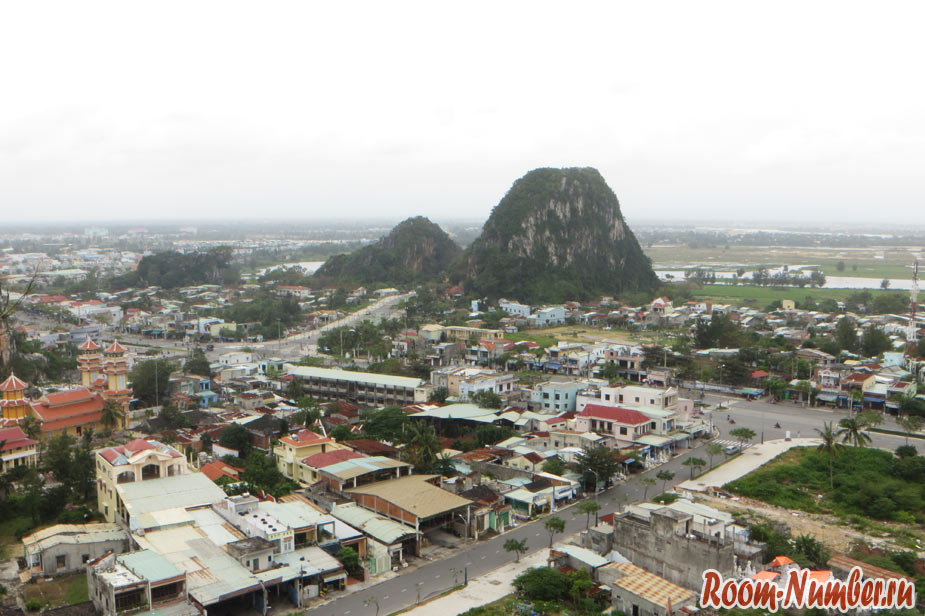 Photo: View of the Marble Mountains in Da Nang from the observation deck on the Water Mountain

The Marble Mountains in Da Nang are a large group of rocks in the middle of fields with trees, bushes and cacti. From afar they resemble the landscapes of Krabi Province and Phang Nga in southern Thailand in miniature. Why are the mountains so called – marble? It’s simple. Once upon a time marble was mined here. Today is no longer mined, but are still sold everywhere on the outskirts of the mountains, marble products.

What is interesting about the marble mountains? 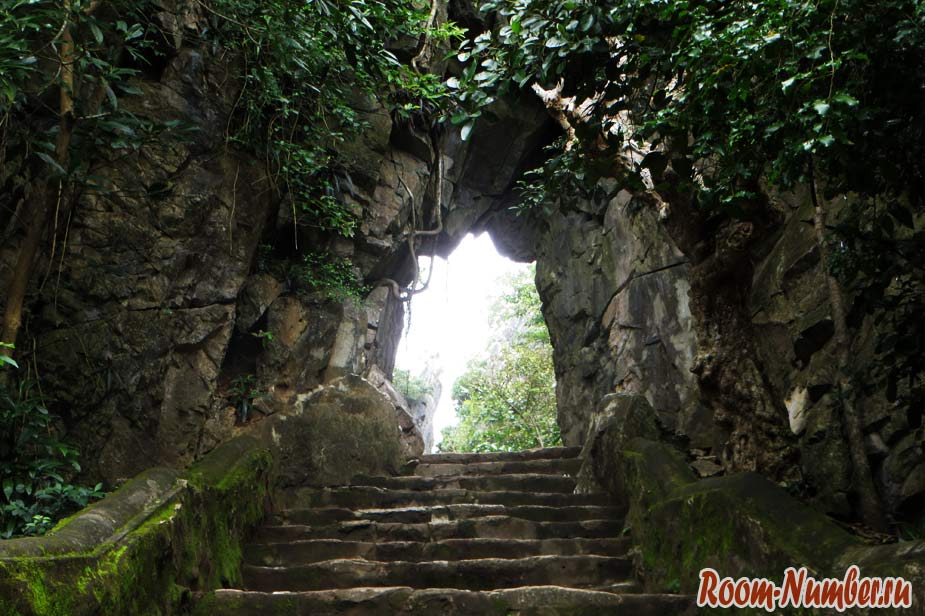 Walking in the mountains is not difficult, climbing equipment is not needed. There are neat paths and stone steps in the mountains. There is even an elevator that lifts tourists to the middle of the mountain for a fee. But it is still better to wear suitable shoes. Heeled shoes and beach flip-flops are not the best solution for the marble mountains. 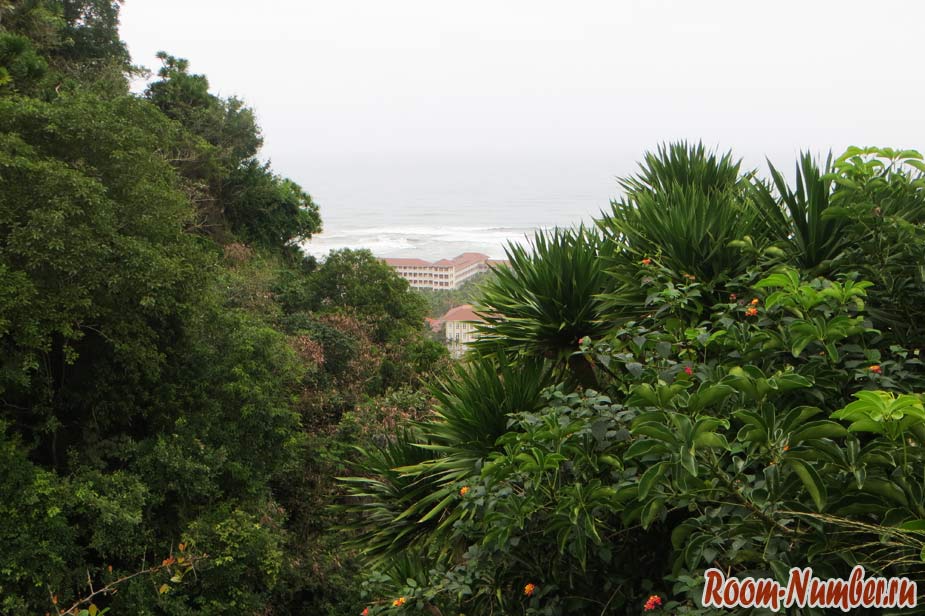 The observation deck with a view of the sea

For our trip to the marble mountains in Da Nang, we chose an overcast day so that it would be comfortable to stomp up the steps. The first thing we did was go up to the observation deck overlooking Da Nang’s beach. 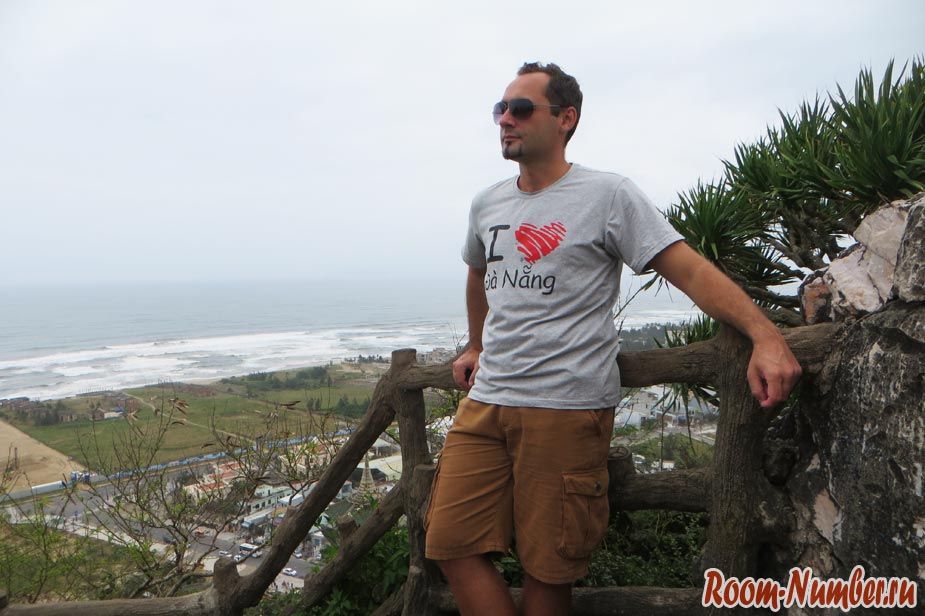 A refreshing breeze, the sound of the surf, a great view. Everything would be great if it weren’t for the Vietnamese tourists who make a chicken coop everywhere around them. We all don’t like Chinese tourists. So the Vietnamese are no different. How nice that the Vietnamese don’t travel abroad like the Chinese. 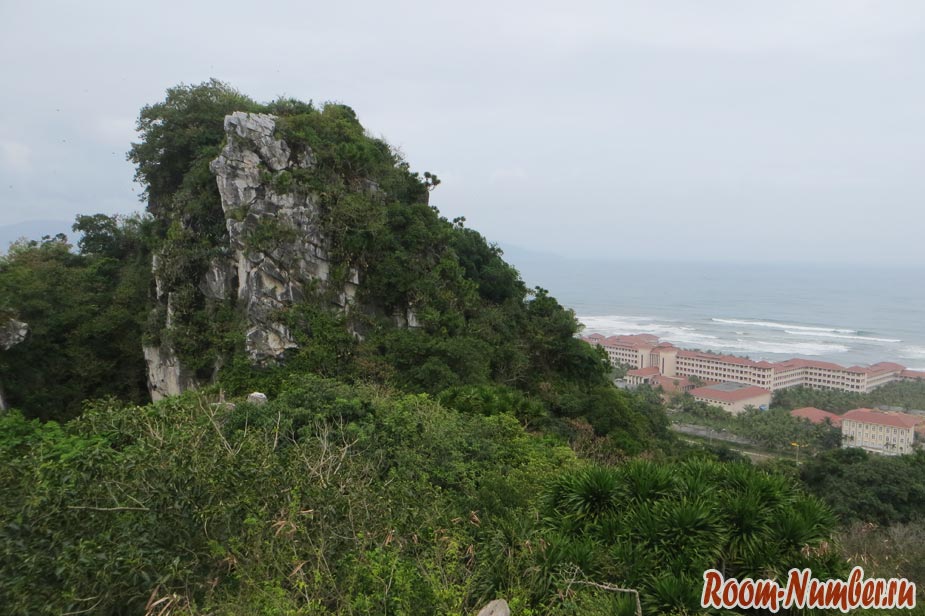 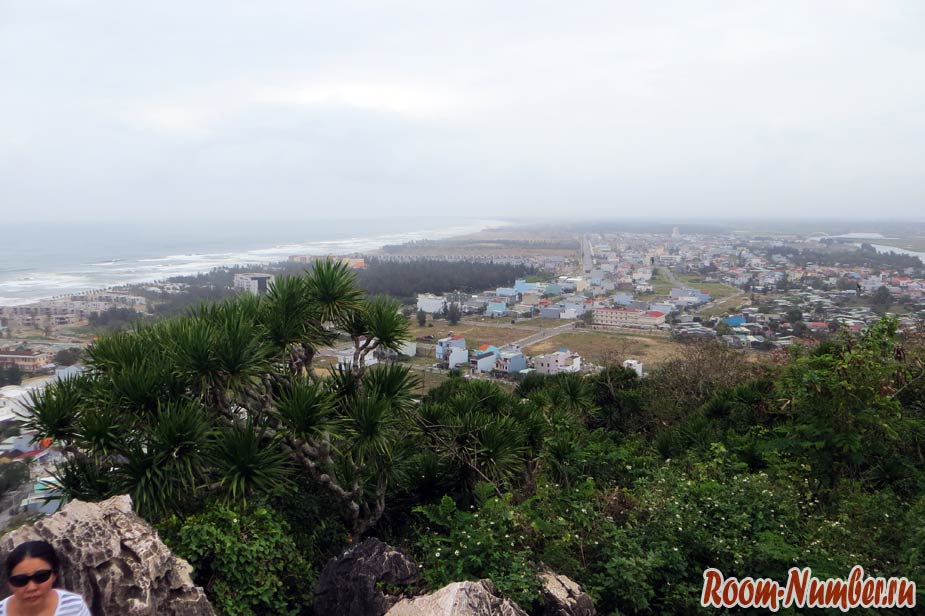 After photographing every inch of the place the Vietnamese went away and the whole charade finally died down. Only Europeans remained at the summit. There was a long-awaited silence. But after a few minutes, the Chinese came up. We hurried down, grateful for the few minutes of silence with the civilized people. 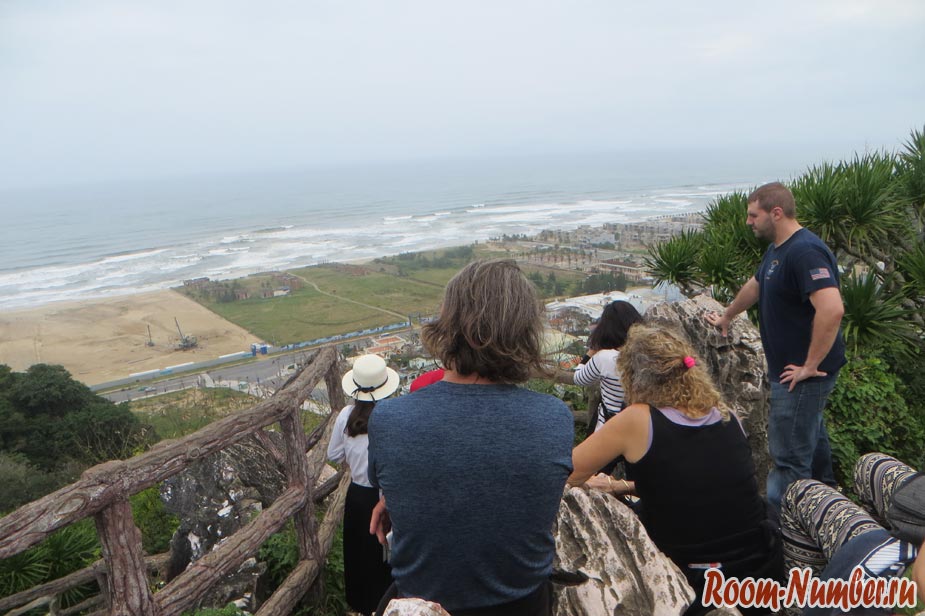 The observation deck overlooking the mountains

The second observation deck is a little lower and is in a Chinese gazebo on the opposite side. All tourists who have visited the Marble Mountains in Da Nang have photos from this spot. Katya also appreciated this view.

Caves in the Marble Mountains

The second thing to see in the Marble Mountains are the caves. We saw 3 caves and went into 2 of them. First we looked at this hollow. The cave is small and consists of two halls. In the first is an altar with a golden Buddha. The second hall can be entered by climbing through a narrow passageway. In the second compartment there is a hole in the ceiling that gives natural light. It is possible to go farther, but there is a very narrow passage and we did not climb up. 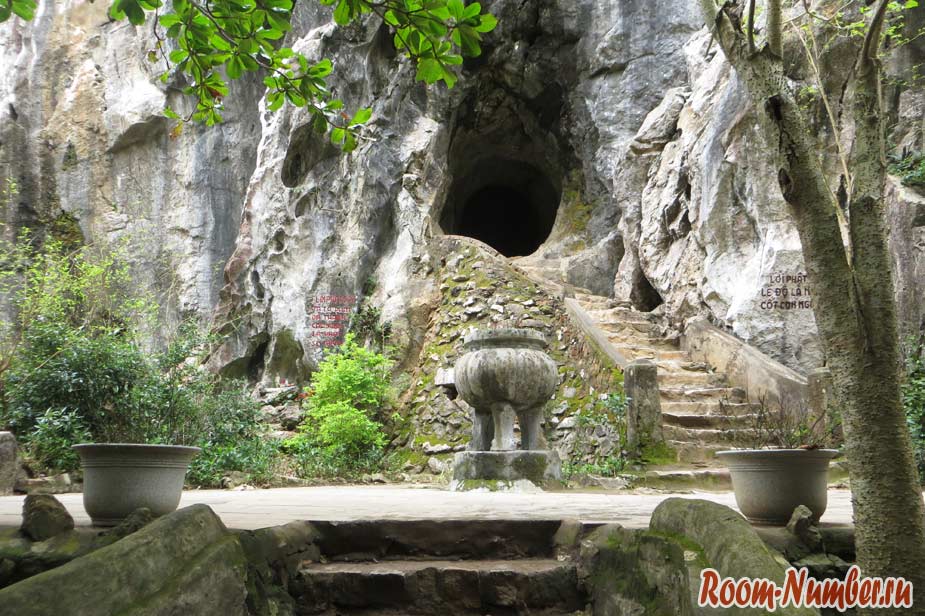 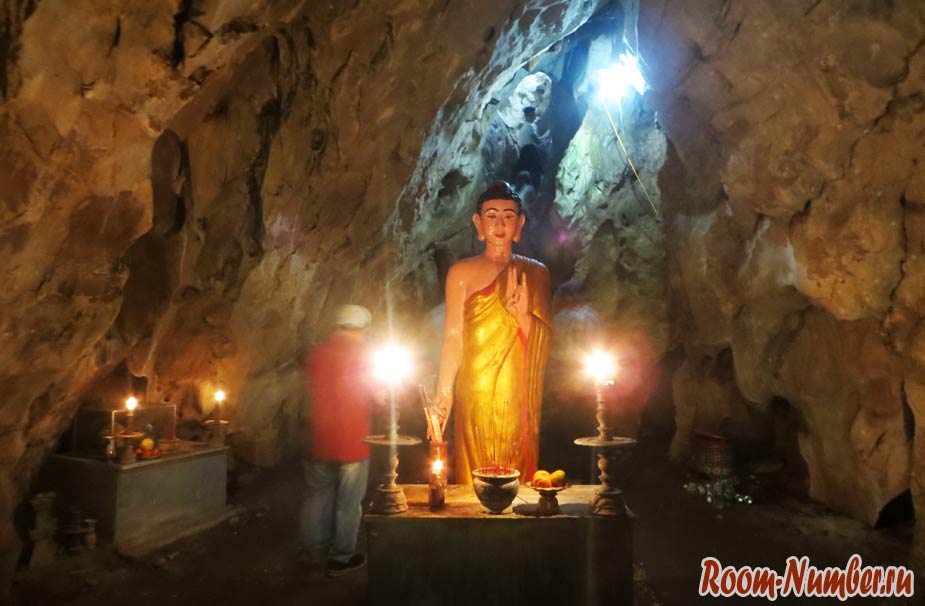 We could not go into the second cave we noticed because of the smoke. The monks probably overdo it with the fire or their stock of firewood began to smolder.

READ
Mount Montserrat in Spain, description of the monastery and photos 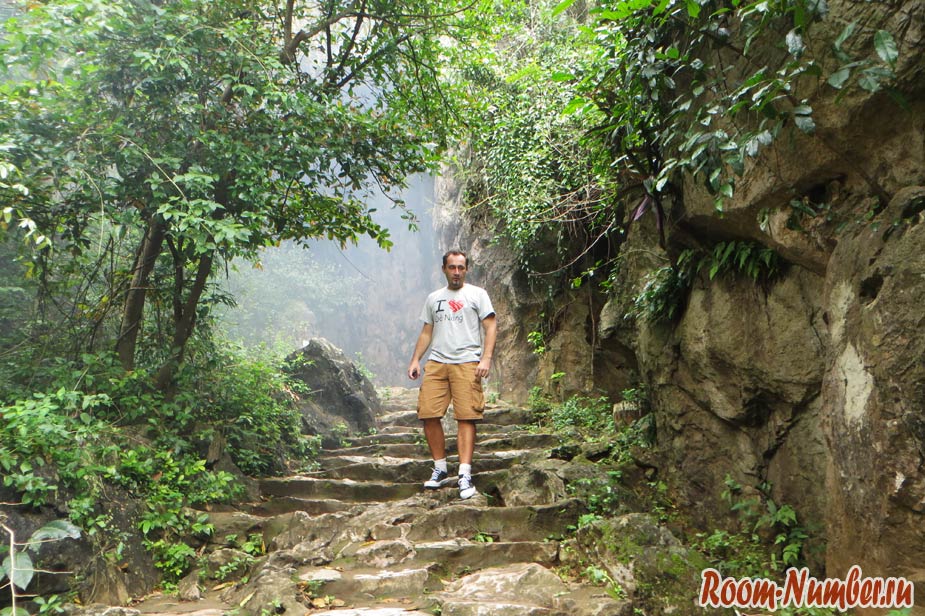 The third cave we found by chance. This cave impressed us most of all with its large hall. We didn’t expect to see such a big free space in the low mountains. It was as if the marble mountains were hollow inside.

The Biggest Cave in the Marble Mountains A small temple was built in the cave. It looks spectacular, just like in the movies.

You can rotate the photo with the mouse around the cave:

The fourth cave is down behind the elevator. It is called Heaven and Hell. There you can look at sculptures of people in various themed poses. We did not go in.

Photo panorama of the cave

Temples and pagodas in the mountains

There are also several small temples and pagodas built on the mountains in the Chinese style. We have not studied the history of the marble mountains, but the temples don’t look very ancient in appearance. 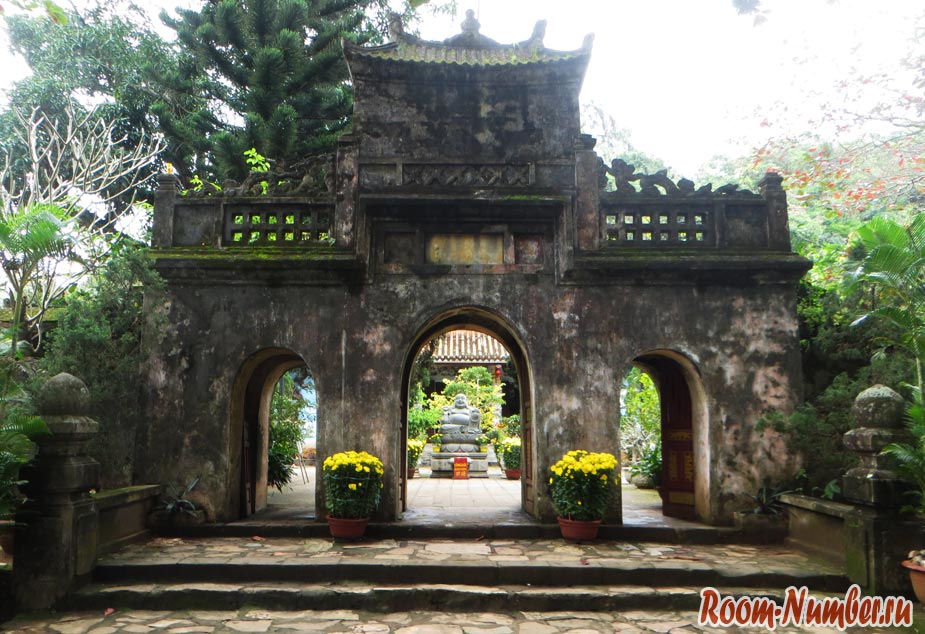 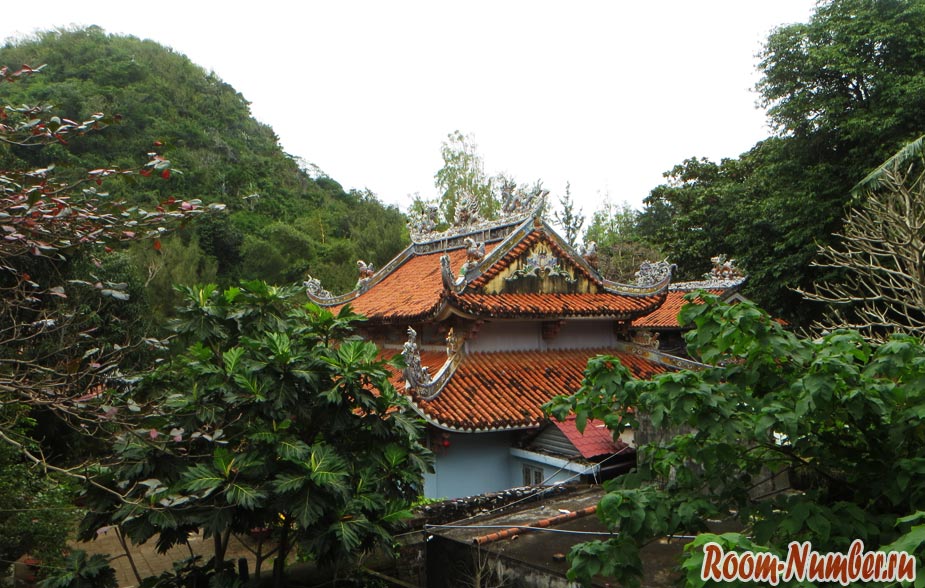 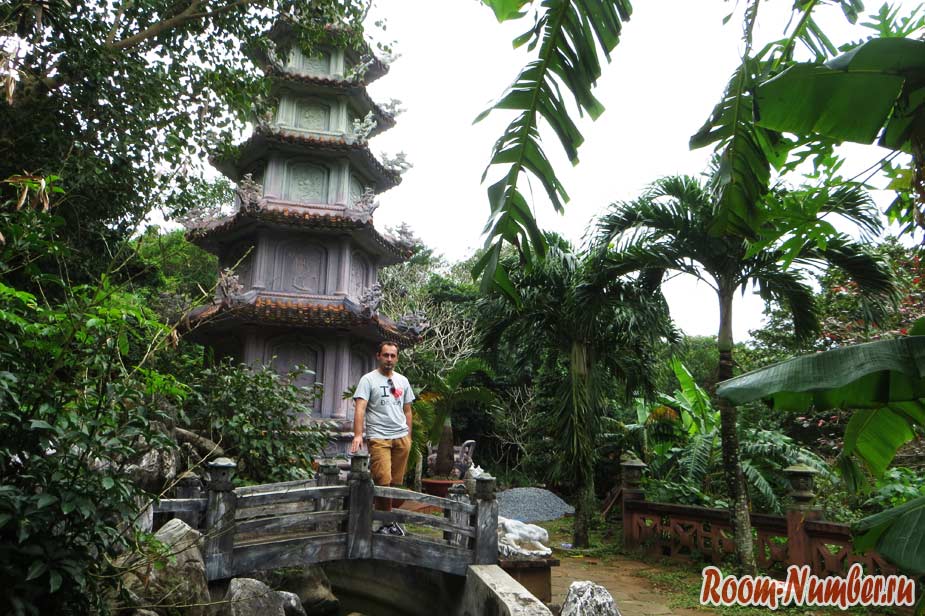 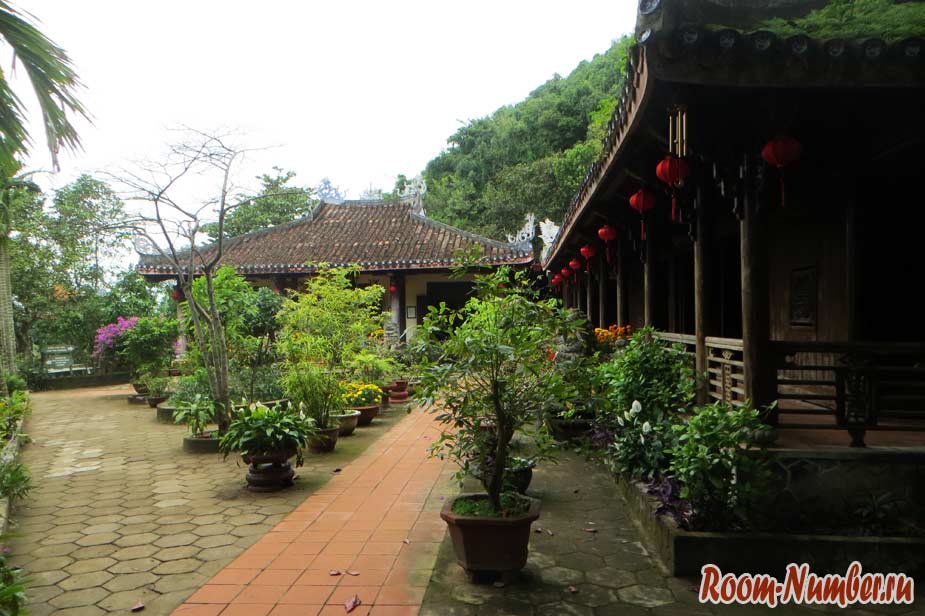 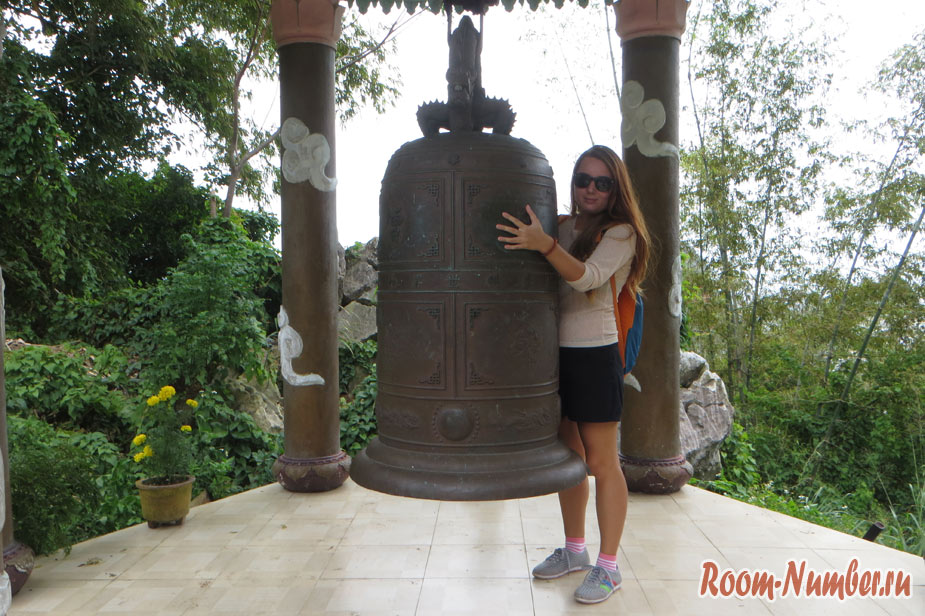 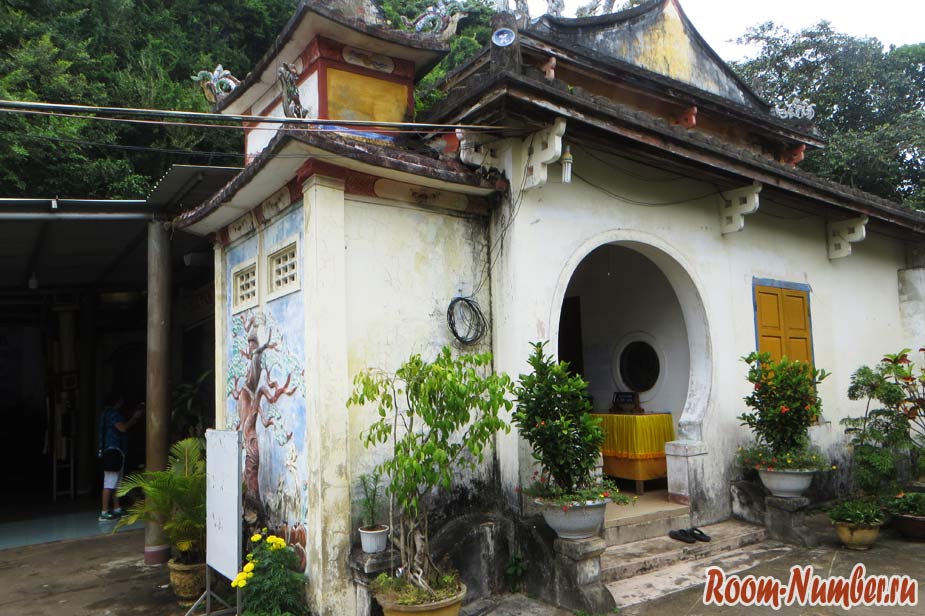 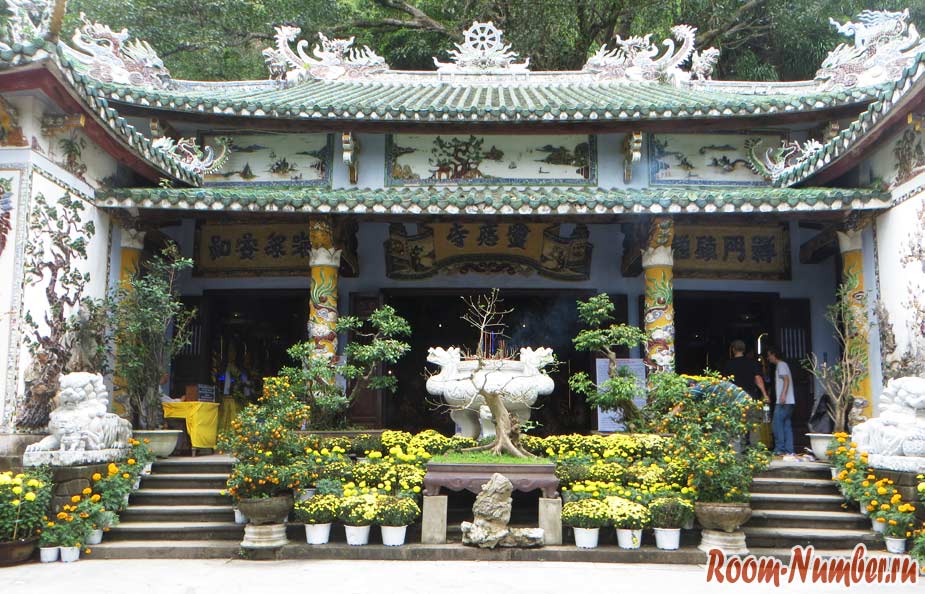 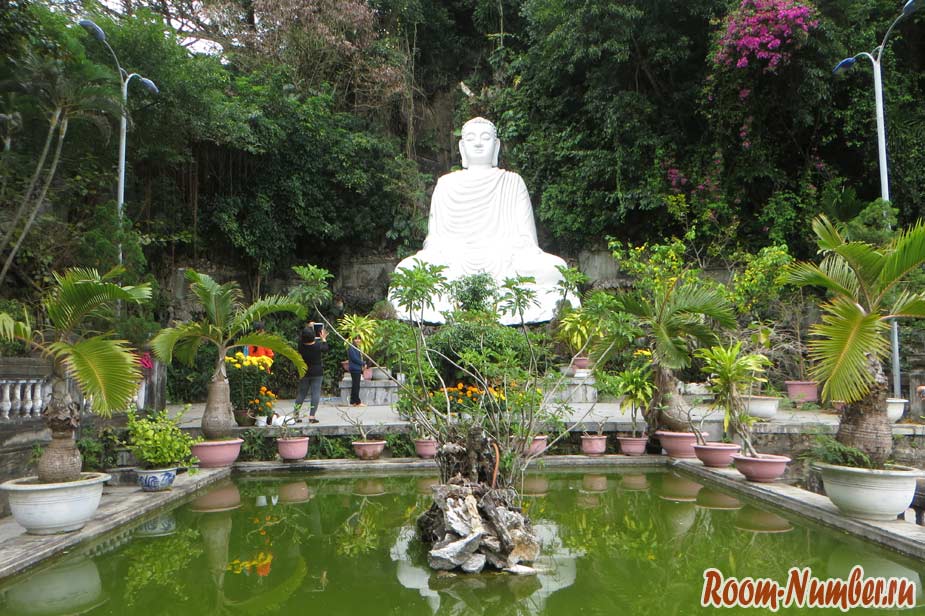 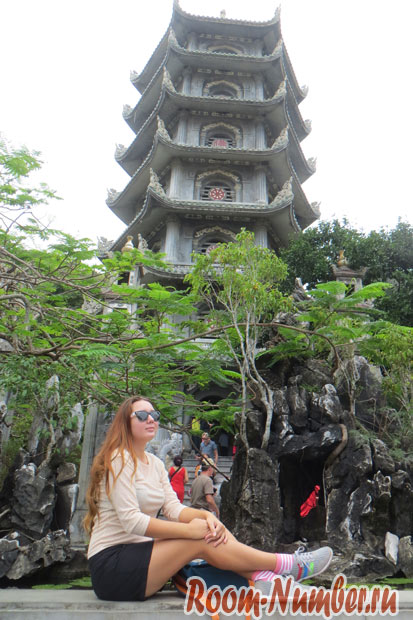 We liked the Marble Mountains in Da Nang. We did not regret going, it was interesting. However, the mountains left a double impression. On the one hand, it was interesting to wander the paths, see the caves, the temple and climb the observation decks. But on the other hand, the crowds of tourists got on our nerves. We also deliberately went on a weekday. We waited until the Vietnamese and Chinese holidays were over. But still noisy and rude Vietnamese and Chinese tourists did not give peace and quiet, which are necessary in such a beautiful place. So, it is definitely worth going to the Marble Mountains, but you should be prepared for crowds of tourists and not count on the solitude at the observation deck or near the temple.

How to get to the Marble Mountains on your own

Getting there on your own is quite easy, both from Danang and Hoi An. All you need to do is to take the bus 01 Danang – Hoian, pay 20 dong per fare and go to the mountains. We posted the route of this bus on the map in the article Danang – Hoian. The Marble Mountains will be well visible from the window. You can tell the conductor Marble Mountains or just Mountains if he asks you where to go. The map at the end of this article shows the main entrance. From the stop it is a 5 minute walk down towards the sea. A one way cab ride from the center of Da Nang will cost VND150,000-200,000. A cab from the beach hotels in Da Nang will cost about VND100,000. You can also easily get on your bike.

READ
Mount Olympus in Greece, where is it on the world map

You should bring water and something to eat. There are outlets and small cafes with tourist prices in the mountains. For example, we had a coconut for 40 VND for the normal price of 20-25. Footwear – sneakers are best. Of clothing, nothing unusual is required, it is not cold, but you can take something to cover your knees and shoulders, since the mountains are a lot of temples.