Where is the Merdven Tobe waterfall in Balaklava?

Now it is difficult to surprise tourists with natural monuments, but the waterfall Merdven Tobe and grotto Koba-Chair have a special charm, are located in the Crimea, in the Balaklava region.

Among the natural attractions of the Crimea the waterfalls have a special place. Crowds of tourists annually visit such popular places as Uchan-Su or Dzhur-Jur. Merdven Tobe waterfall is no less interesting attraction of the peninsula, with its history, legends and fascinating nature.

The Merdven Tobe waterfall is located on the outskirts of the village Rodnoe, Balaklava district, east of Sevastopol and northeast of Balaklava. The surrounding area is markedly different from the usual Crimean nature. The vicinity of the village Rodnoe is more like a jungle or an Indian prairie. The village borders with Bakhchisarayskiy area, which makes the place popular along the whole western coast of the Crimea.

The name “Merdven-Tobe” translates as “upside down steps”. The rock, from which the water falls, really resembles a huge staircase upside down. The waterfall itself is a small stream of water from a grotto falling into a pond at the foot. The pond, or lake, is created by the nearby Uppa River. It originates in the large Chernaya River and moves southward, where the rocky precipices of Imam-Kayasa are located.

The residents of the village of Rodnoye call the waterfall Rodnovsky.

The most spectacular sight is observed in spring. Streams of river water mixed with melted snow give a powerful jet. In summer, the five-meter waterfall dries up, occasionally filled with rain. Below, almost at the level of the lake, there is a through cave Koba-Chair. Tourists go here for unusual photo shoots in the grotto.

Nearby are the popular attractions of the Crimea:

The places around the rocky ledge of Imam Kayasa and Merdven Tobe Falls are laden with legends. The truest of them says that the Gothic and Alanian peoples performed sacrificial rituals here. It is said that the sacrificial offerings were carried through the waterfall, thereby purifying the sacrifice from sins.

Another legend tells of ancient Greek monks who had looked out for a place for a temple. The sanctuary was destroyed by earthquakes, the sun and rainfall. If the myths are to be believed, the water of Merdwen Tobe is the tears of the dead Greeks.

Scientists and historians have a different opinion on the origins of the grotto and waterfall. They argue that the cause is the tectonic movement of the plates.

Among the modern myths is one popular about a film crew that came here for the sake of impressive pictures, but the water dried up. The director’s team had to use a fire engine in order to convey all the charm of the local color on the screen.

The picturesque area of Rodnoe village has always attracted tourists. The natural resources here are so unique, that outwardly Crimea resembles Western or Southern Europe resorts. Broadleaved forests are replaced by cane valleys. Steppe prairie away from the rivers gradually turns into forest-steppe, and further – in the coastal thickets of exotic trees.

On the border of Balaklava and Bakhchisaray districts you can see a variety of plants:

There is a lot of cattail growing here – popularly it is called “reed”.

What is interesting about the grotto Koba-Chair

Koba-Chair grotto is located under the Merdven Tobe waterfall. In summer, when the stream dries out, the entrance to the cave is perfectly visible from the opposite shore of the lake. The grotto has a through passage – one entrance leads out of the thicket, the other out onto the pond.

The cave was formed naturally – there used to be a solid rock, but the river, air, wind, and sun acted on the stone block for thousands of years, and then an opening appeared. The interior of Koba Chair confirms the scientific version – the walls, covered with calcite outgrowths, limestone and tuff, have thin streams of liquid.

Near Merdven Tobe and Koba Chair there is an equipped site for tourists. There is a fee for guided tours and sightseeing of the local attraction. On the shore of the pond there are tables with benches, gazebos and barbecues. People come here not only to make a spectacular photo, but also to swim in the crystal clear lake.

WARNING! Planning to swim in the pond, you should remember that the temperature of the pond rarely exceeds 18-19 degrees Celsius in summer.

How to get to Merdven Tobe waterfall

To get to the village Rodnoe and Merdven Tobe is not difficult, because within a radius of 20-30 km there are large cities of the Crimea – Sevastopol, Simferopol, Balaklava, Bakhchisaray. You can come here by bus or by car. There are several ways to get to the waterfall:

The Merdven Tobe waterfall and Koba-Chair grotto are excellent places for rest, which can diversify your trip to the Crimea. Here there is no entertainment metropolis, but there is a nature that is almost untouched by man. 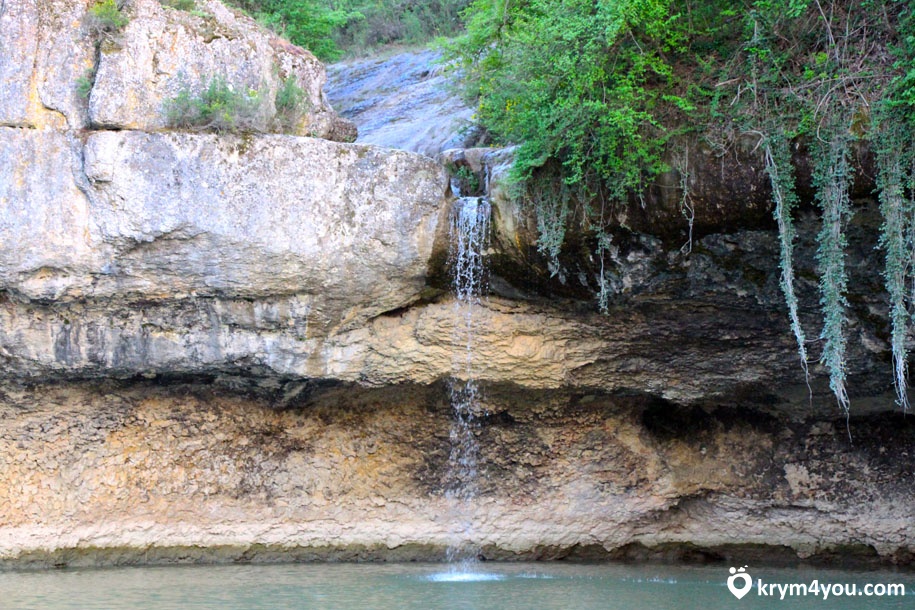 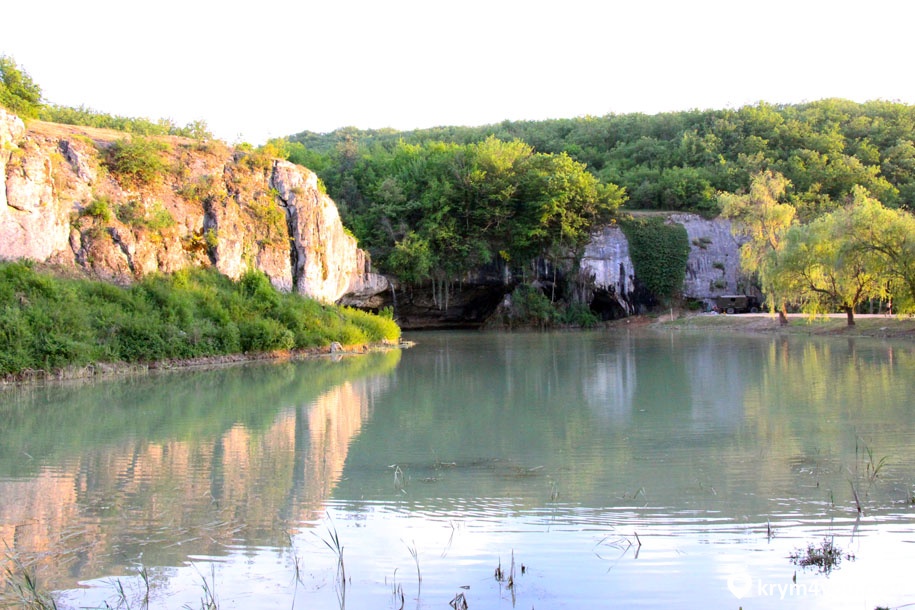 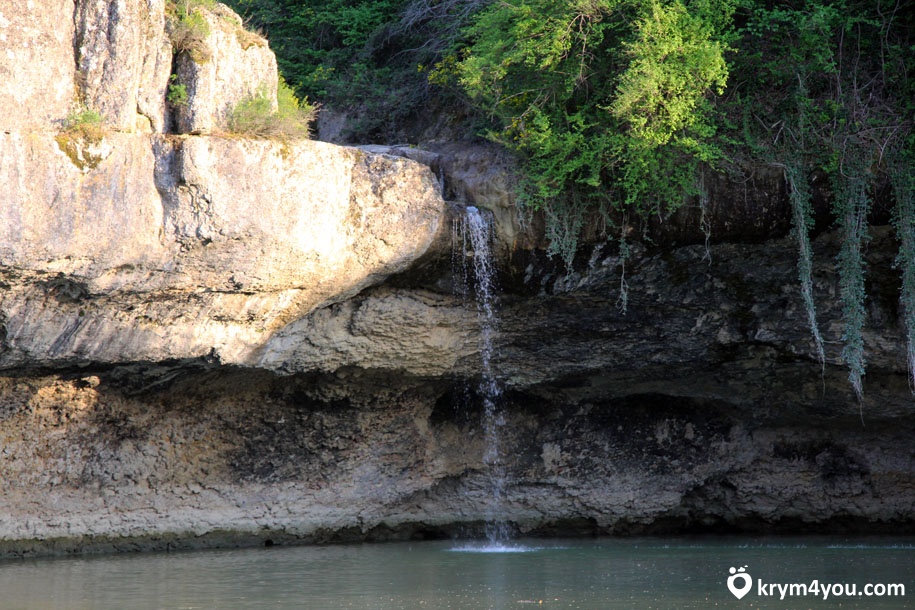 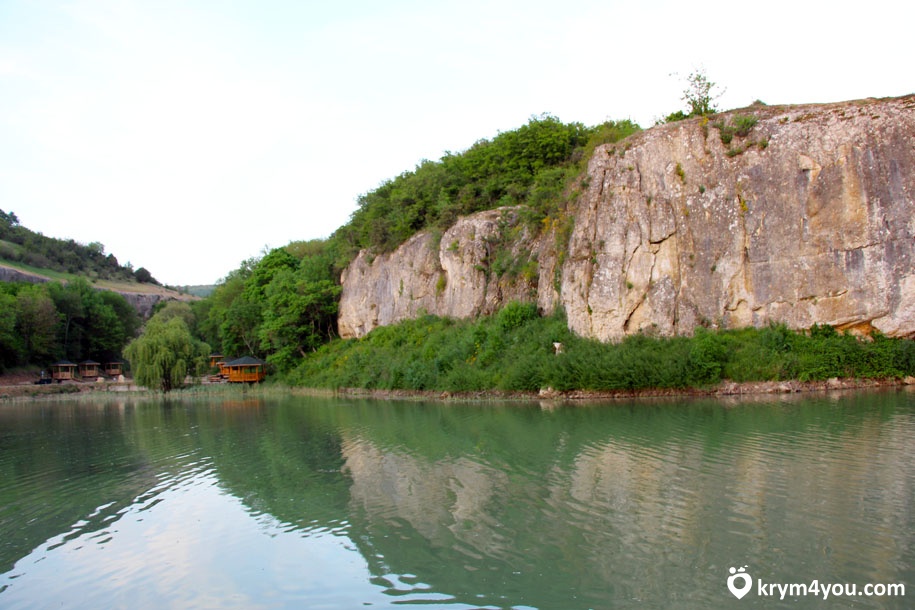 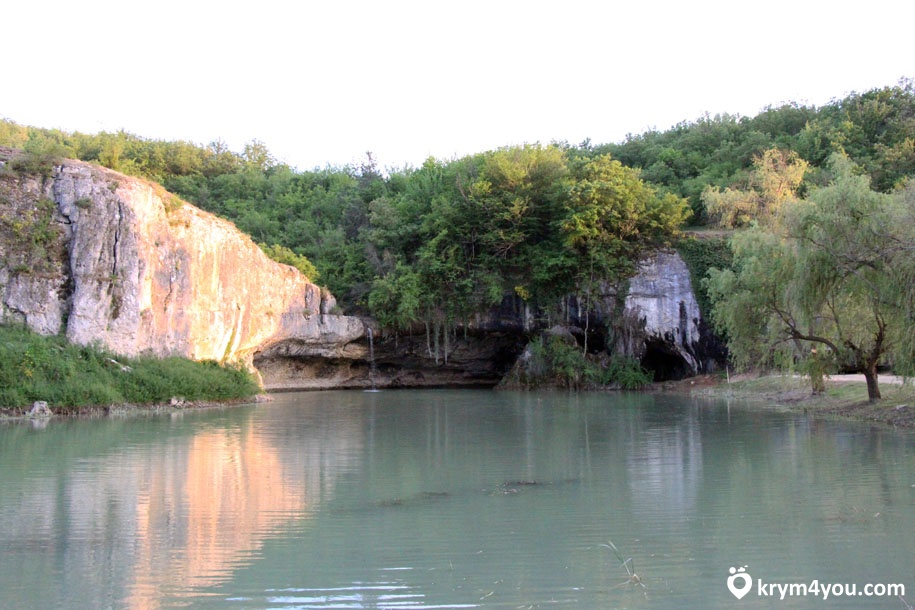 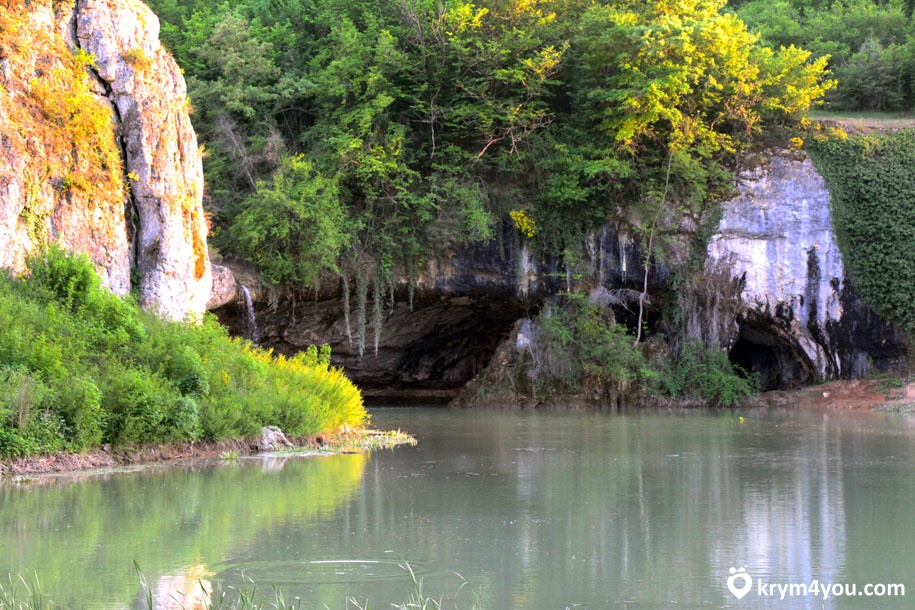 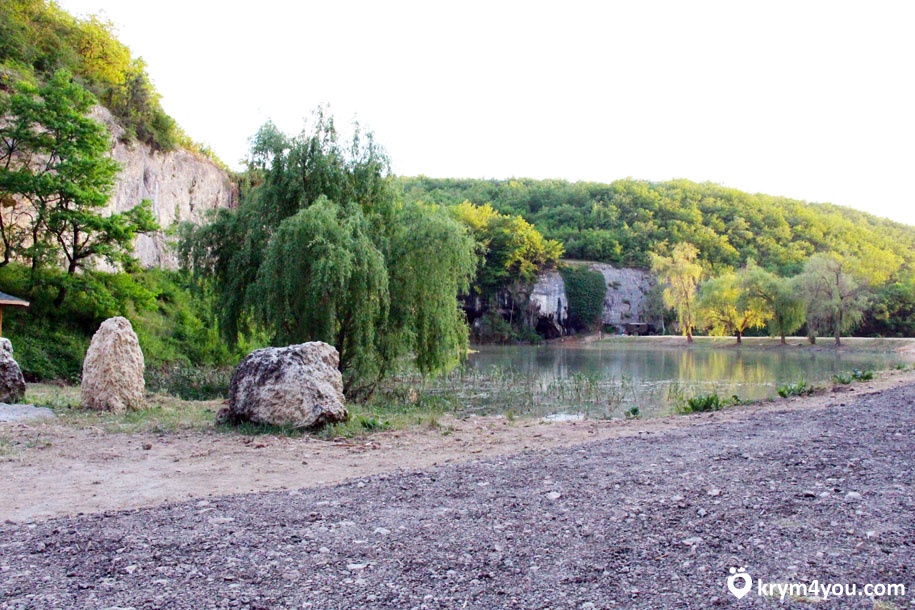 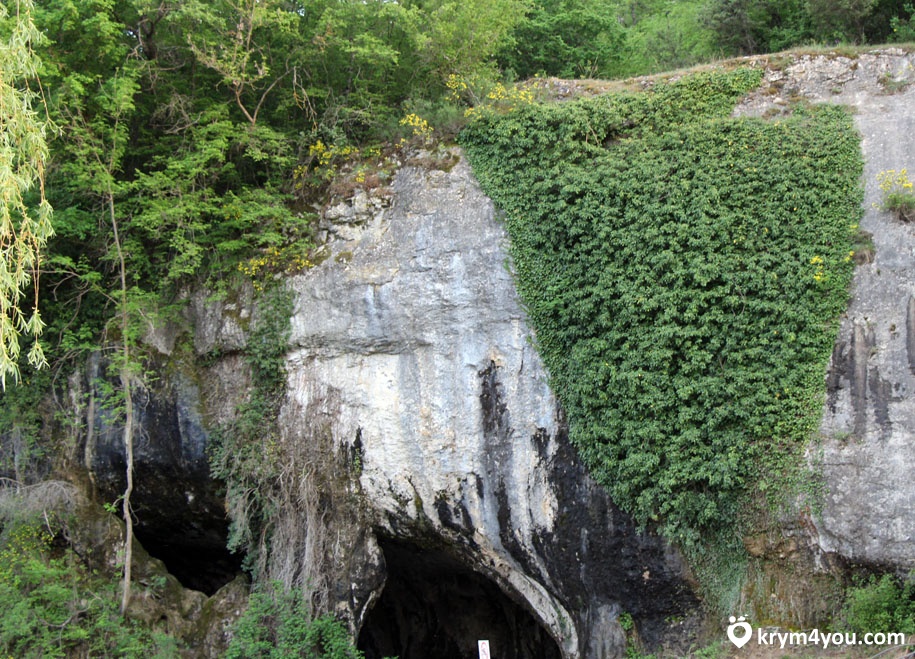 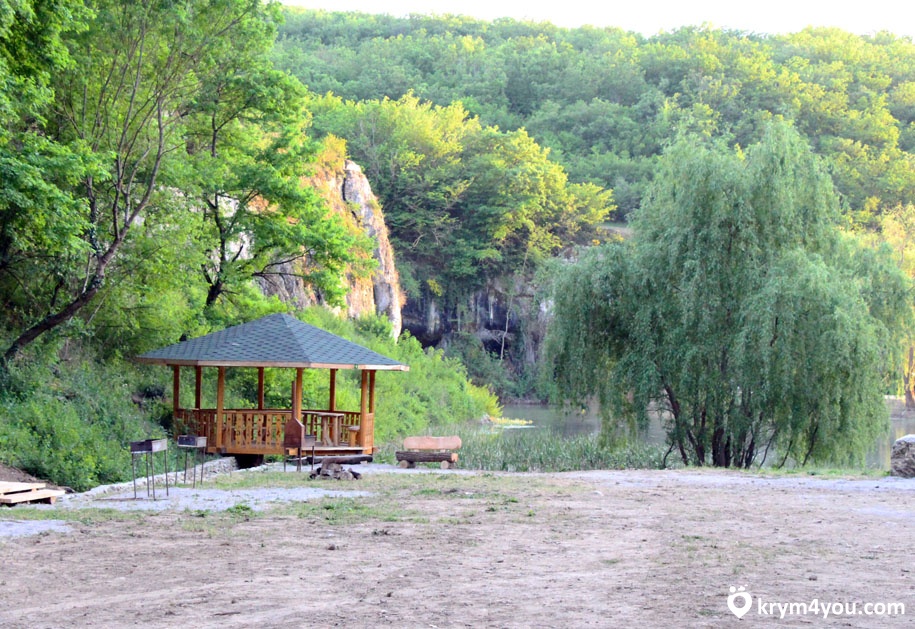 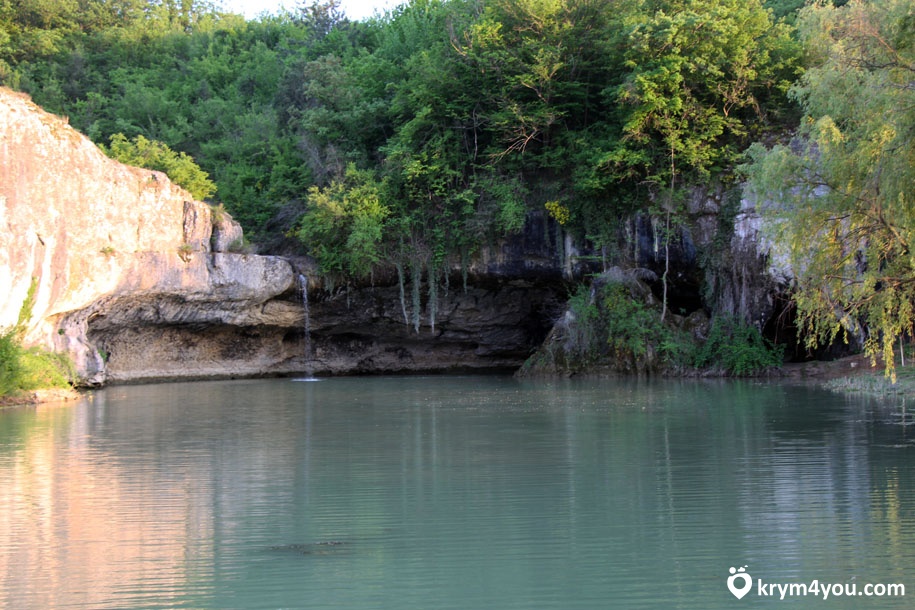 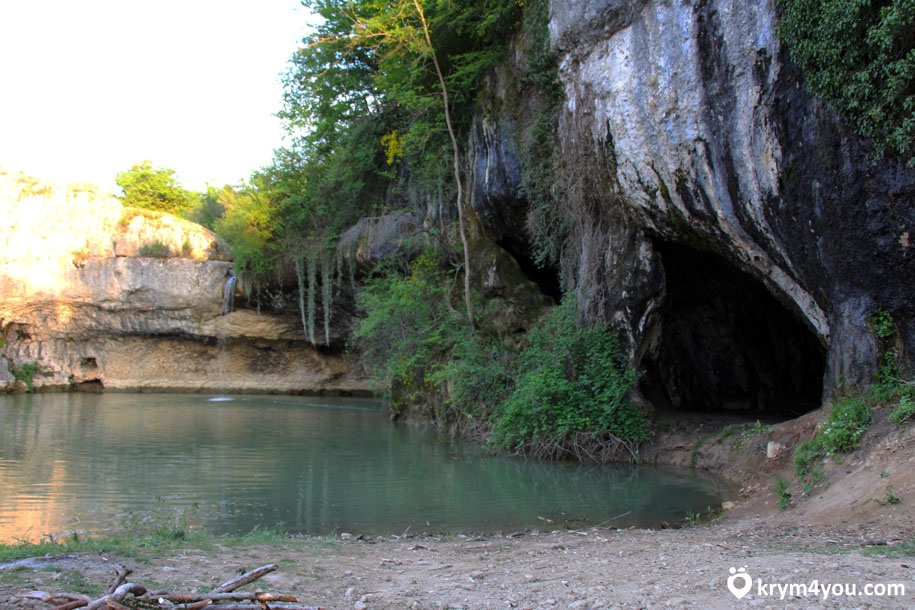 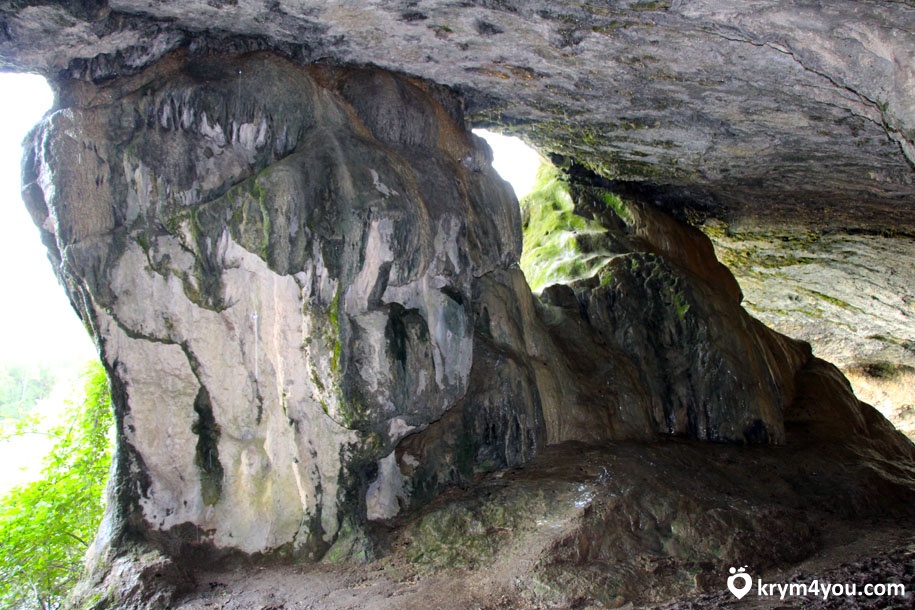 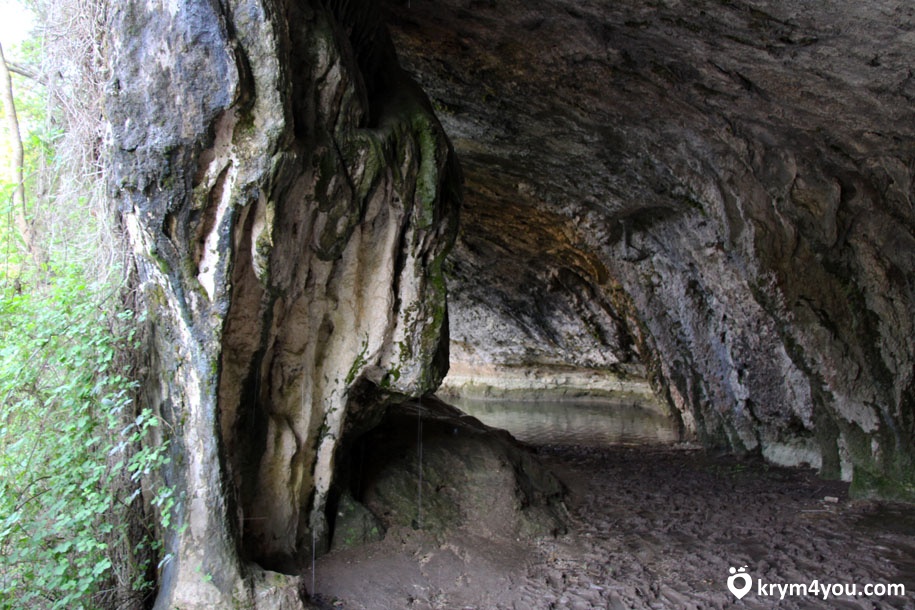 Merdven-Tobe waterfall and Koba-Chair grotto, one of the most beautiful and fascinating sights of the Crimean peninsula. Merdven-Tobe and Koba-Chair, it is a matter of Mother Nature, but most of the atmosphere of these places, still, have created their own hands man. For example, a small dam was built near the Uppa Lake and wonderful places for rest appeared near the lake.

The waterfall Merdven-Tobe and grotto Koba-Chair are located near the village of Rodnoe, Balaklava district. From the village to the waterfall leads dirt road, directly the approach to the waterfall, last year, moved 250 meters closer to the village. The road passes, almost adjacent to the mountain and leads to a large parking lot. You park your car and walk 15 meters along the road and you come to Uppa Lake, Merdven Tobe waterfall and Koba-Chair grotto. Just a few steps from the lake, there is a large recreation area with gazebos, places for cooking shashlik and small glades for active games. Phone for information about Merdven-Tobe Waterfall and Koba-Chair Grotto, or to order a gazebo +7 (978) 748-48-42.

Learn more about the lake, grotto and waterfall.

A small rift, where today is a waterfall, was formed by tectonic faults that formed the relief of Crimea millions of years ago. The Merdven-Tobe waterfall is mostly seasonal or becomes active during great floods or downpours. Maximum activity of the waterfall is from February (if not minus temperatures), almost to the end of May. Then only rains and downpours may awaken it for a short time. Summer, the saddest season for the waterfall. It dries up, and Lake Uppa turns into a small puddle. It lasts this way until October. The waterfall is fed by the Uppa River, which in turn replenishes the lake. If it were not for the dam built in the last century, the lake would be flooded every year by the state farm, which is located a little lower on the slope. The lake, for a time, was a natural reservoir for irrigation.

The average height of the Merdven-Tobe waterfall is 4.5 meters, due to the fact that the water surface is constantly changing (the lake dries up, then fills to the brim), depending on the time of year. Under the influence of spring floods, the force of the Merdven-Tobe waterfall increases several times. This is the time of the intensive process of formation of the second attraction of these places, the grotto under the Koba-Chair waterfall. This process has lasted more than a thousand years, and during this time, under the waterfall formed a large grotto, which has many holes or windows, overlooking the waterfall. The grotto is relatively small by Crimean standards, but its beauty is undeniable. On the side of the dam is a small entrance, and opposite the waterfall there are many windows for viewing. Near the entrance to the grotto – a living wall of greenery. It looks quite beautiful and unusual. Also, somewhere in the center of the grotto is a very unusual calcification, which is more typical for caves or underwater grottoes.

The easiest ways to get to Merdven-Tobe waterfall and Koba-Chair grotto are Bakhchisaray-Sevastopol or Sevastopol-Yalta highway. If you consider the first option, you should turn off the road, at the sign – Tankovoye village, get to the mountain Krokodil or turn in the direction of the village Red Mak. After Ternovka you’ll find the turn to Rodnoe. If you get from the highway Sevastopol – Yalta, then look for signs to turn in the direction of the village Chernorechye, moving toward the village of Ternovka, not reaching the village, about 1.5 km, will turn toward the village of Rodnoe.

In the village of Rodnoe, along the main road, there will be a large unfinished building (possibly broken). Around it there is a field and a well-trodden dirt road. It will take about 7-10 minutes to walk along the dirt road. The road leads to a small canyon, along the mountain – that’s exactly what we need. After about 3-5 minutes on this road you’ll reach a small parking lot and here you are. If you plan to rest at the waterfall Merdven-Tobe and grotto Koba-Chair, then necessarily familiarize yourself with the sights of Baidar Valley and the city of Sevastopol, in order to as productive and rich as possible to make your route.