Top 10: The most beautiful waterfalls in the world (50 photos)

1. Victoria Falls – Zimbabwe / Zambia Victoria Falls or Mosi-oa-Tunya, located in southern Africa between Zimbabwe and Zambia. Victoria Falls were named after Queen Victoria in 1855. It was first named by David Livingstone, a Scottish explorer and missionary. Until that time Victoria Falls was known as The Mist that Thunders. According to some of the lists of the world’s wonders it takes its place in the list of the Seven Natural Wonders of the World. Although it is neither the tallest nor the widest waterfall in the world, it is one of the largest and most spectacular. Its width of 1,708 meters and height of 108 meters form one of the largest water screens in the world.

Niagara Falls – Canada / USA Niagara Falls is a complex of waterfalls on the Niagara River, on the border between Canada and the United States. It consists of three waterfalls – the Horseshoe Falls, the American Falls and the Bridal Veil Falls – which separate the American state of New York and the Canadian province of Ontario. Although the height of Niagara Falls is only about 53 meters, the magnificent Niagara Falls are one of the most powerful waterfalls in North America. The apparent height of the American Falls is only 21 meters wide – 323 meters. The width of the Horseshoe Falls is 792 meters. The volume of falling water reaches 5,700 cubic meters. A very impressive view opens from the Canadian side of the Rainbow Bridge.

4. Giessbach Falls – Switzerland Giessbach Falls are located on the opposite shore of Lake Brienz, near the picturesque village of Iseltwald. The waterfall is a series of terraces, through which streams of water flow down the rock. It is a very bright and picturesque waterfall. Usually you can see the Giesbach Falls on European postcards for tourists or travel guides. It combines all the natural elements and beauty for which Switzerland is famous – crystal clear lakes and snow-white mountain peaks surrounded by tranquil greenery. The Giesbach waterfall is formed by 14 cascades of water falling into Lake Brienz. What a beautiful sight!

6. Iguazu Falls – Argentina / Brazil Iguazu Falls is one of the most spectacular natural wonders. Iguazu Falls are located on the border of two South American countries, Brazil and Argentina in South America. The Iguazu Falls are 270 individual waterfalls with about 40 million cubic meters of water flowing through them every hour and stretching 2.7 kilometers wide. Not surprisingly, “iguazu” translates as “big water” from the language of the local Guaraní Indians. The height of Iguazu is not so high, only 82 meters. But it is one of the most powerful waterfalls in the world.

READ
12 flooded cities in the world, description and photos

8. Gullfoss Waterfall (Gullfoss) – Iceland Gullfoss (Gullfoss, Gudlfoss) is a waterfall in Iceland. It is located in the south of the country in the geyser valley Haukadalur. Gullfoss means “golden waterfall” in Icelandic. Probably such a name was given because of the fact that in sunny weather the rainbow from it is visible several kilometers away. The waterfall is quite unique both in form and in structure. It is formed by three separate levels and two cascades. The height of the upper level is 11 meters and the lower level is 21 meters. The total depth of the fall is 70 meters. From the top of Gullfoss you can see the blue ice of the Langjokull glacier and a large mountain pass Kjolur.

9. Angel Falls – Venezuela Angel Falls are considered the highest waterfall in the world with a height of 1054 meters. Angel Falls (Angel in English, locally known as Churum-Meru) is located on the Churumi River, a tributary of the Carrao River (Orinoco River Basin) in South America, Venezuela. The falls were officially discovered by a Mexican pilot and gold prospector, James Crawford Angel, after whom they were named. Angel Falls are 20 times higher than Niagara Falls. Before reaching the ground, the water disperses into tiny particles and turns into a mist that can be felt even several kilometers away from the falls.

10. Beaver Falls, Supai, Arizona, USA Beaver Falls is located in Havasu Creek Canyon. It is beautiful not for its size, but for the large number of cascades located close to each other. The waterfall is about 9.7 km downstream of Supai, and is the most difficult to reach. 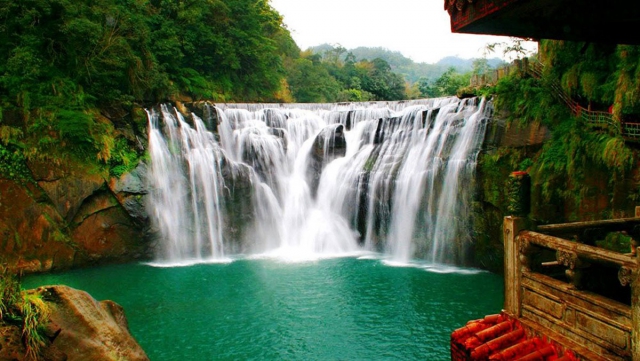 Nature amazes us with magnificent spectacles, including stunning waterfalls. To see these powerful streams of water surrounded by spectacular scenery, it is worth traveling even to the remotest corners of the world. Take a look at 25 of the most beautiful waterfalls on Earth. 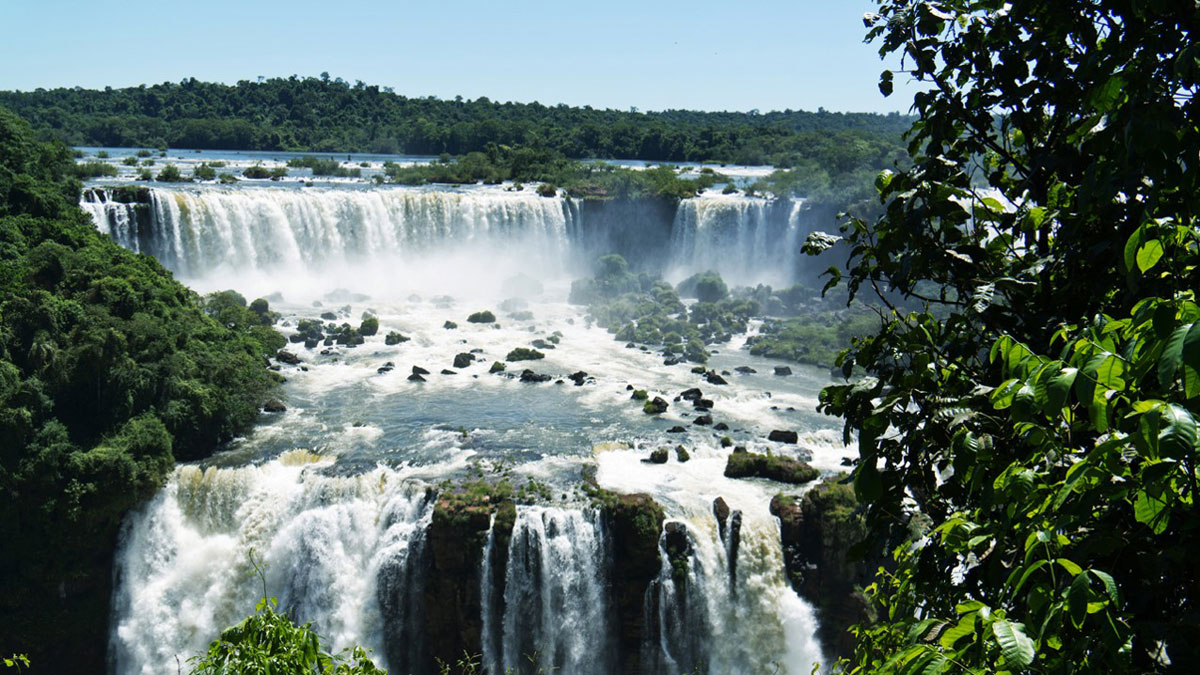 The Khon Falls are located on the Mekong River between Laos and Cambodia and every second more than nine billion liters of water fall here. Its height is about 21 meters. 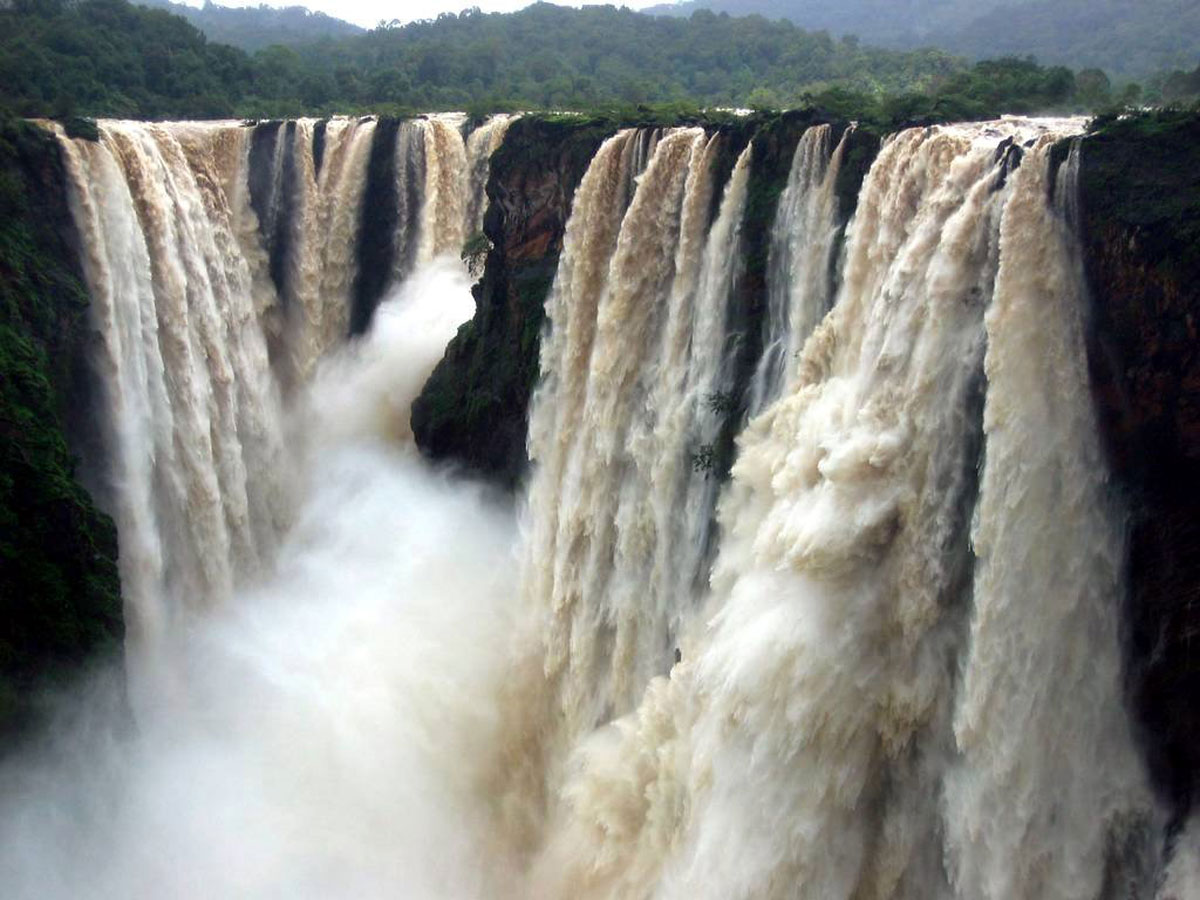 This is the highest waterfall in India. Or rather a series of waterfalls that reach a height of up to 200 meters! The best time for tourism in these parts is the rainy season, the period in which the Jog Falls look the most impressive. 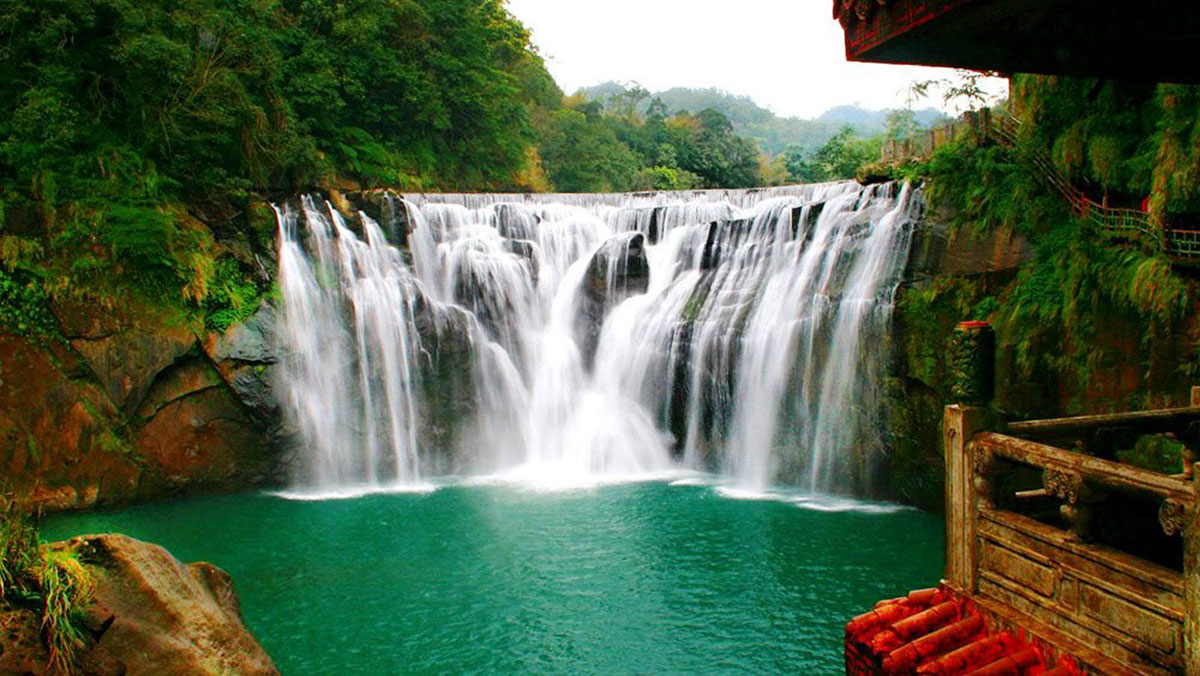 A magnificent waterfall with emerald crystal clear water on the Keelung River, Taiwan. It is the largest waterfall in the country with a height of 20 meters and a width of 40 meters. 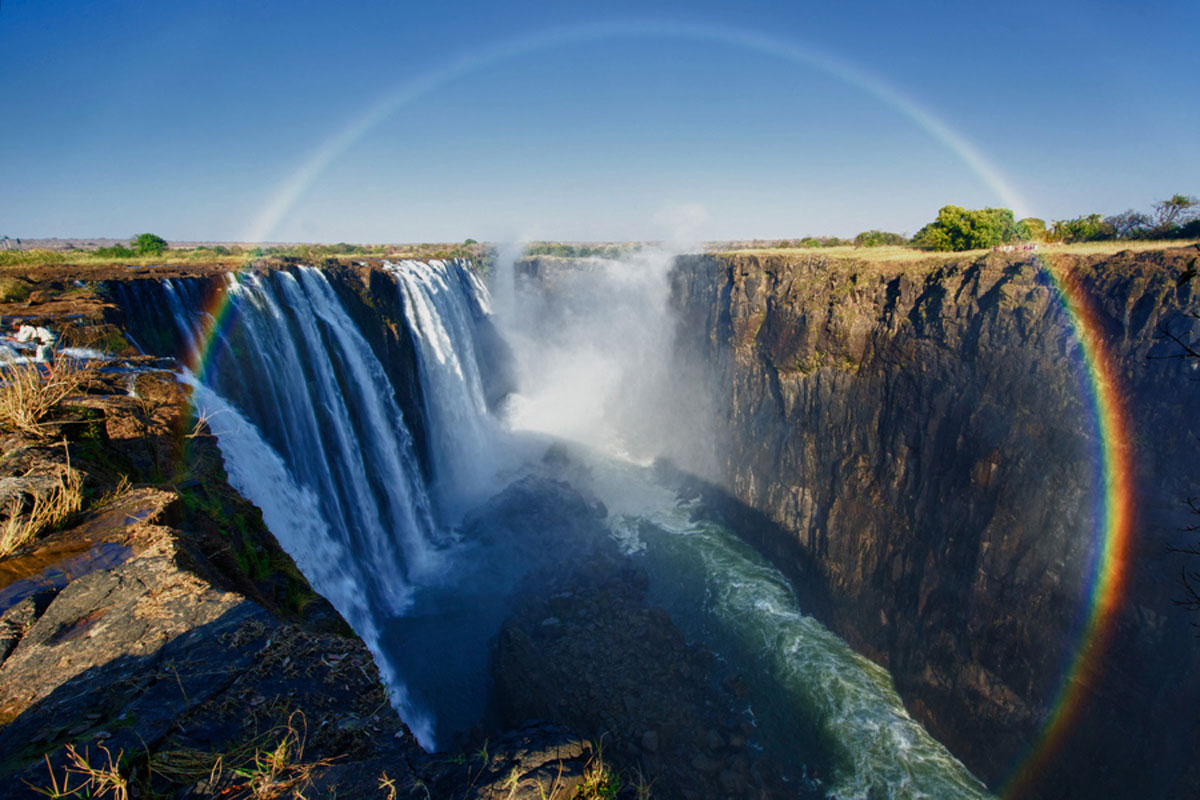 Victoria Falls are a UNESCO World Heritage Site and are often regarded as the largest in the world. It was discovered by David Livingstone in 1855 and named after the British Queen Victoria. Although it is also a common theory that he named it after his late wife Victoria. 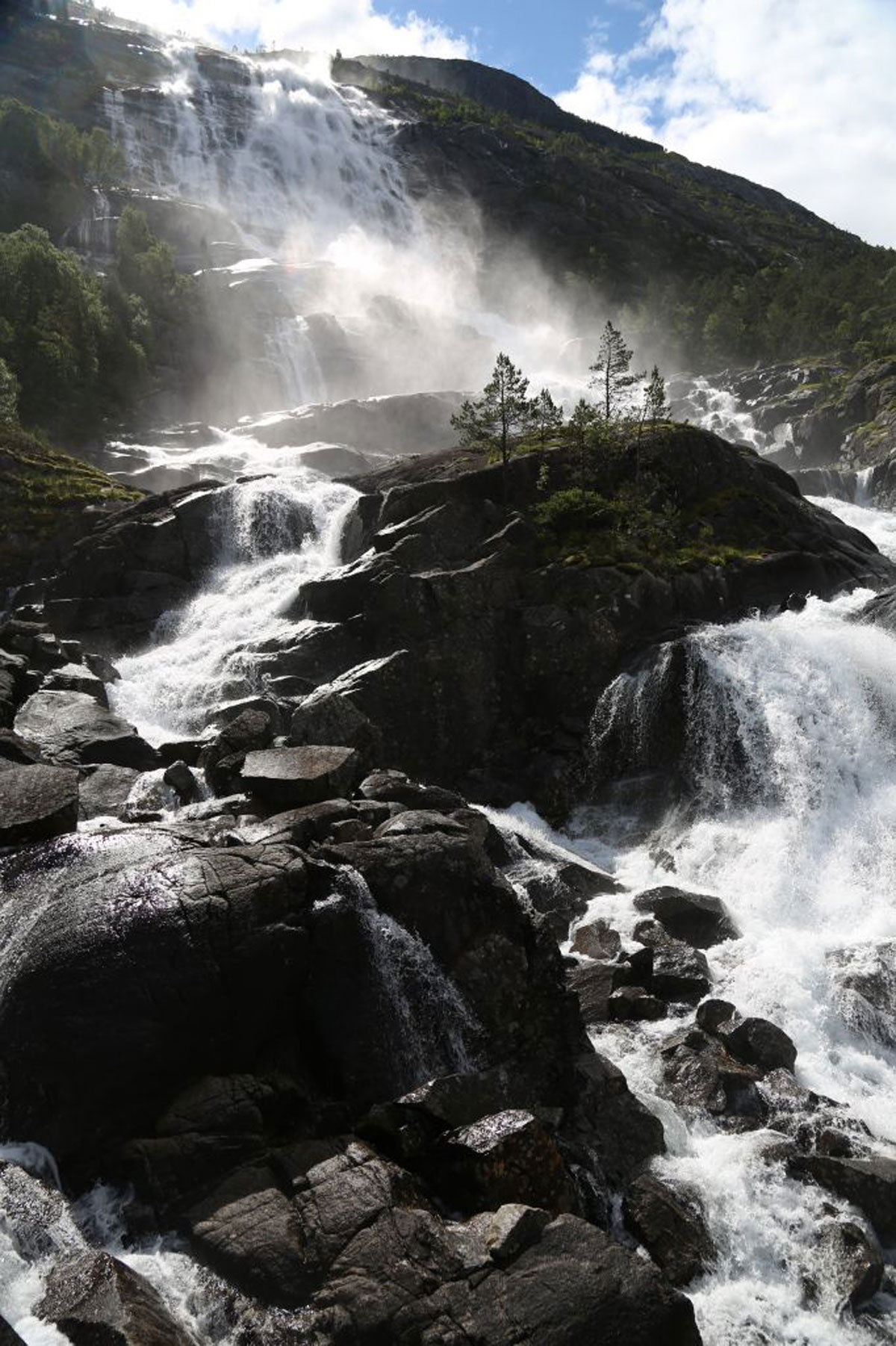 Langfossen Falls is located in the municipality of Etne, in western Norway and features easy access: the European highway E134 passes right at the foot of this waterfall, which is very convenient for tourists. 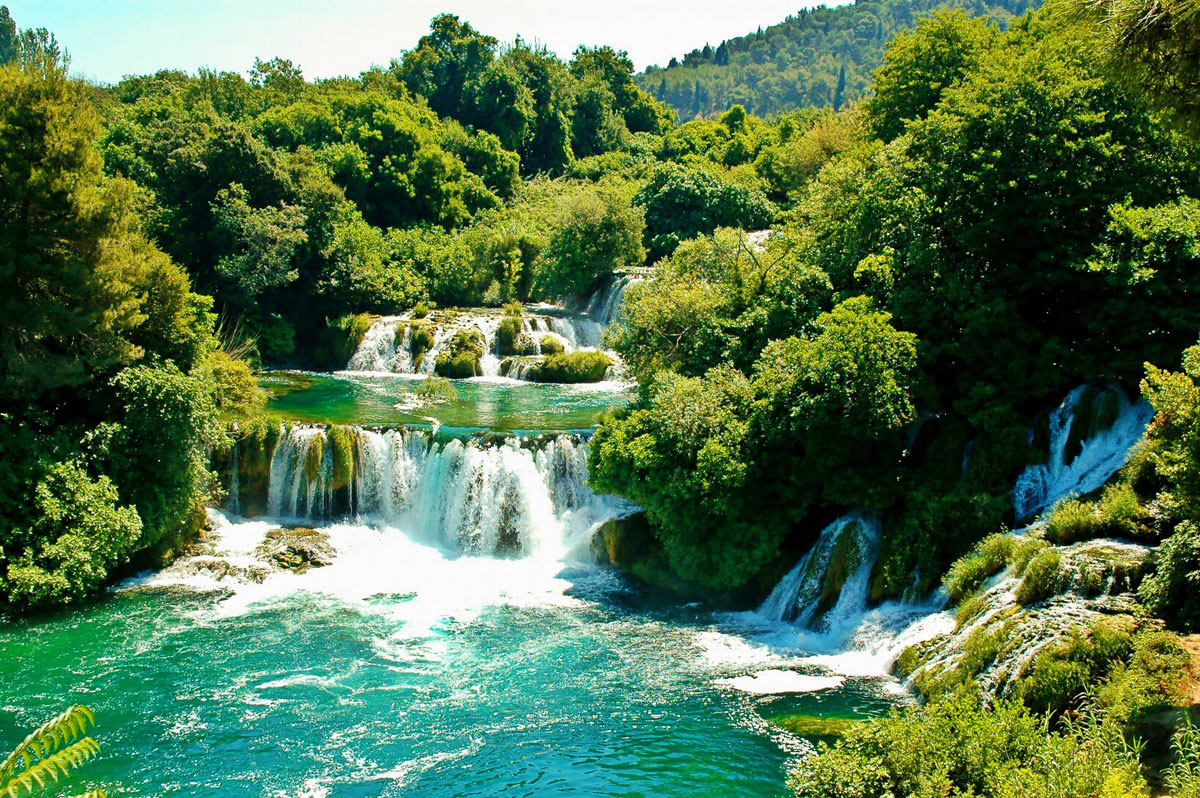 It is located in the Krka National Park, Croatia, and is very popular with bathers and diving enthusiasts. Turquoise waters of the Dinaric alps flow into the magnificent waterfall Veliki Slap (The Great Waterfall), surrounded by lush vegetation, it is the largest waterfall in the Plitvice Lakes region. 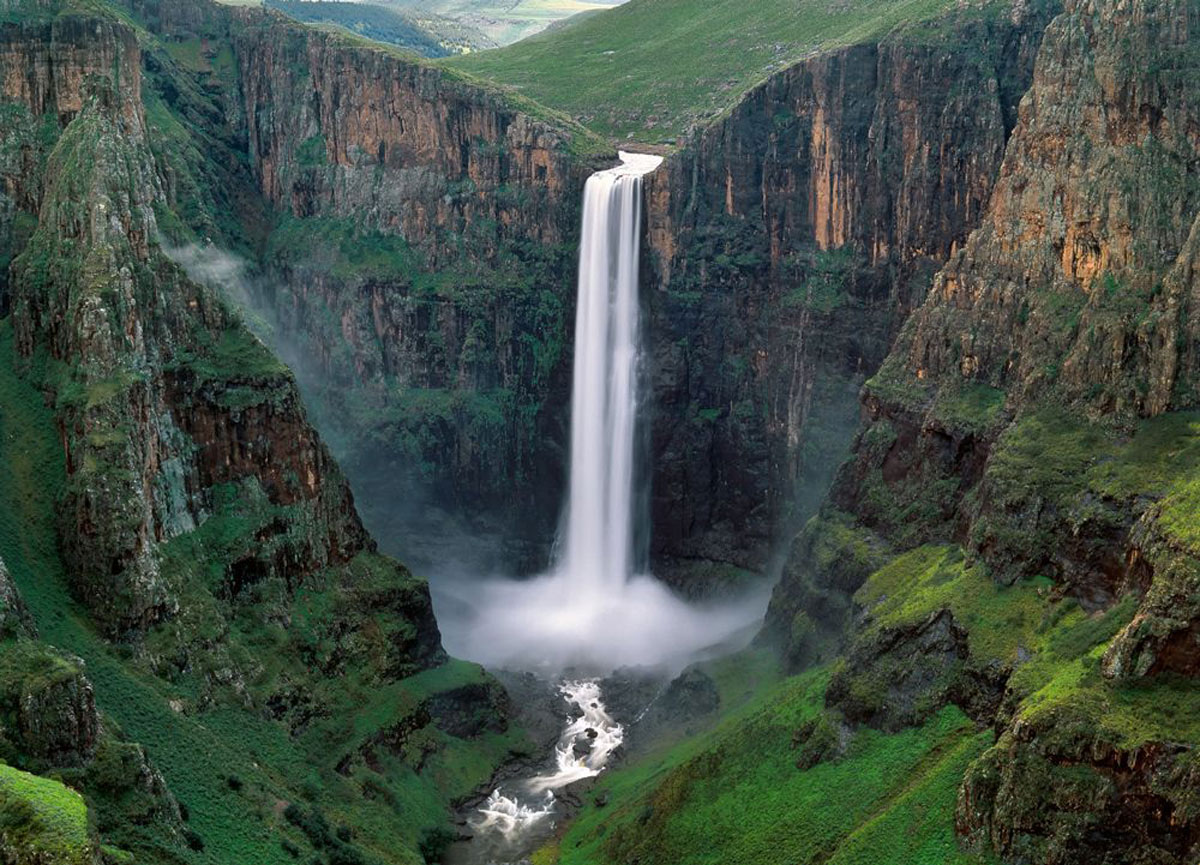 Due to a number of controversial issues, this waterfall ranks either third or 14th in the world. In any case, Gocta is one of the highest and most majestic waterfalls in the world, and was first seen relatively recently only in 2003. 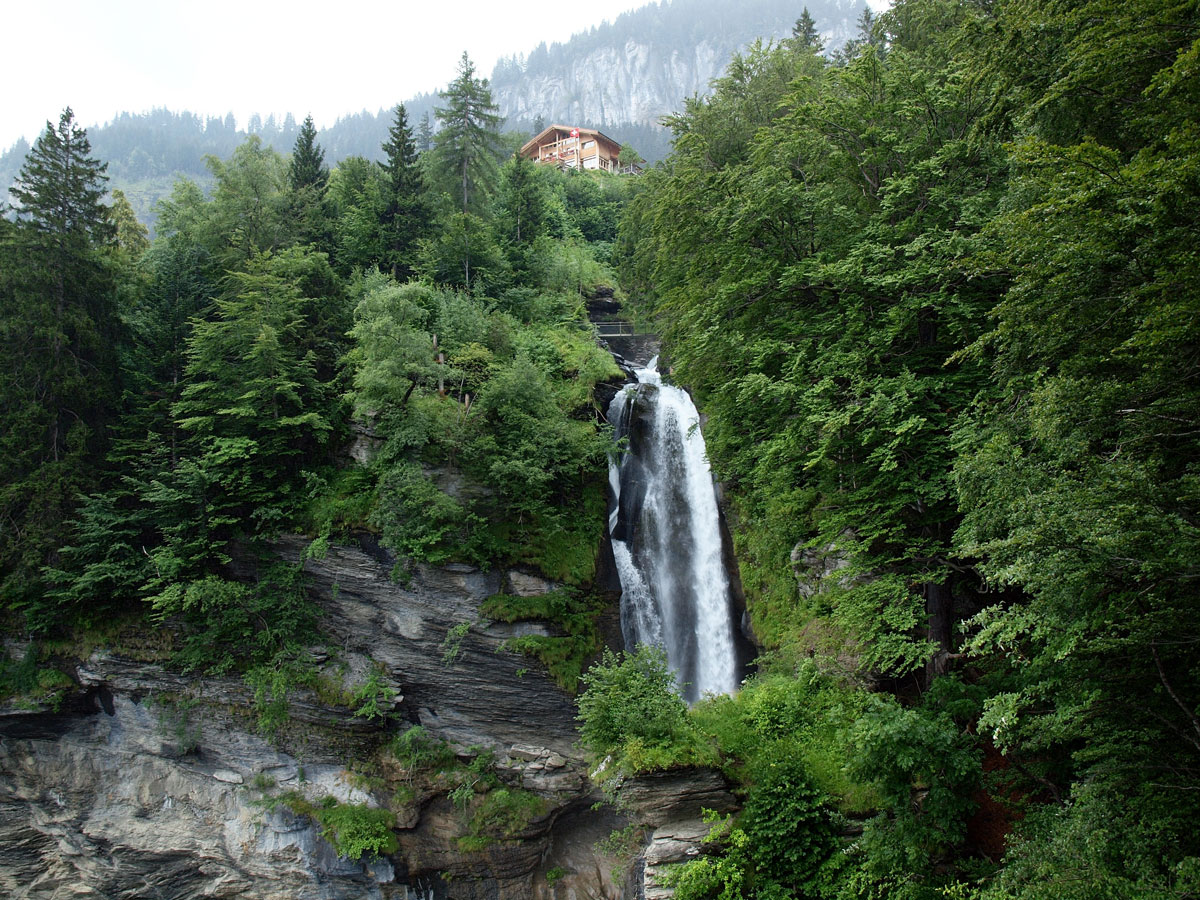 This is not even one, but a series of waterfalls located near Bern, Switzerland. The height of Reichenbach waterfall reaches more than 250 meters. It is also notable for the fact that this is the place where the final clash between Sherlock Holmes and Professor Moriarty in the novel by Arthur Conan Doyle took place. 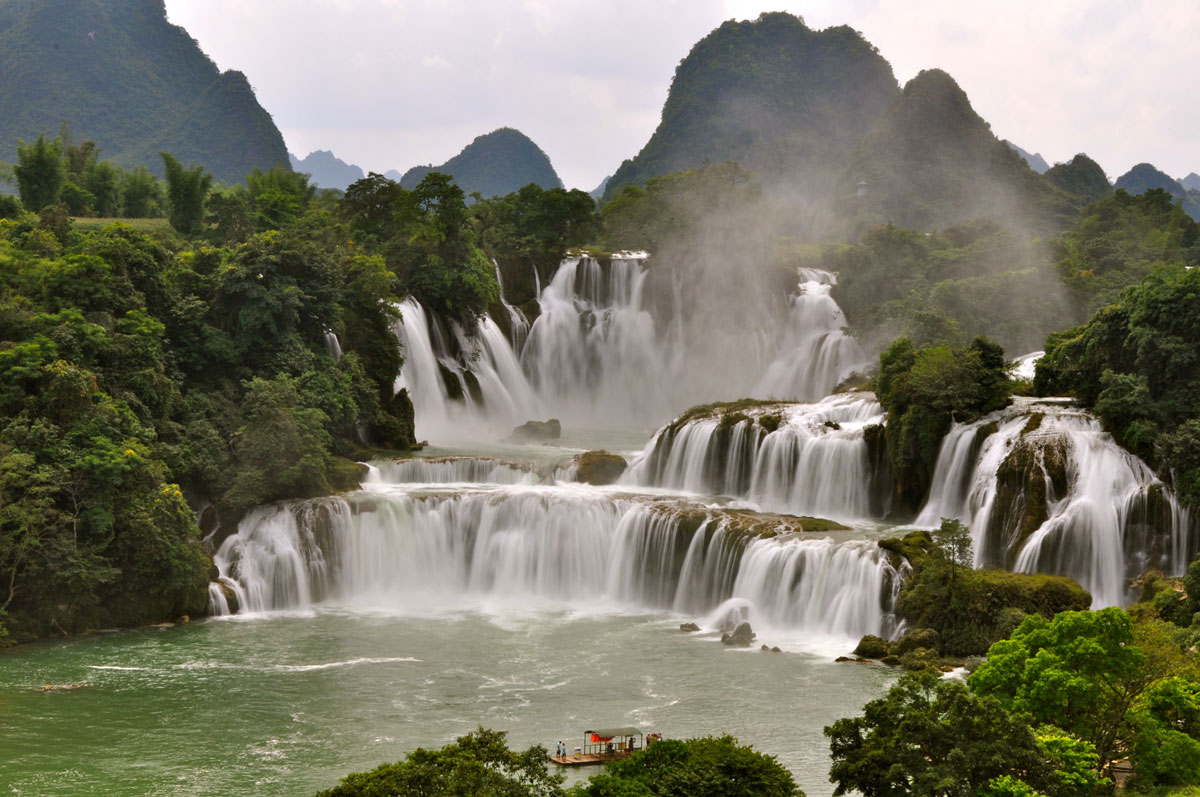 This largest waterfall in Asia is located on the Guichun River on the border of China (Guangxi Province) and Vietnam, and is known among the Vietnamese as the Banzeuc Falls. 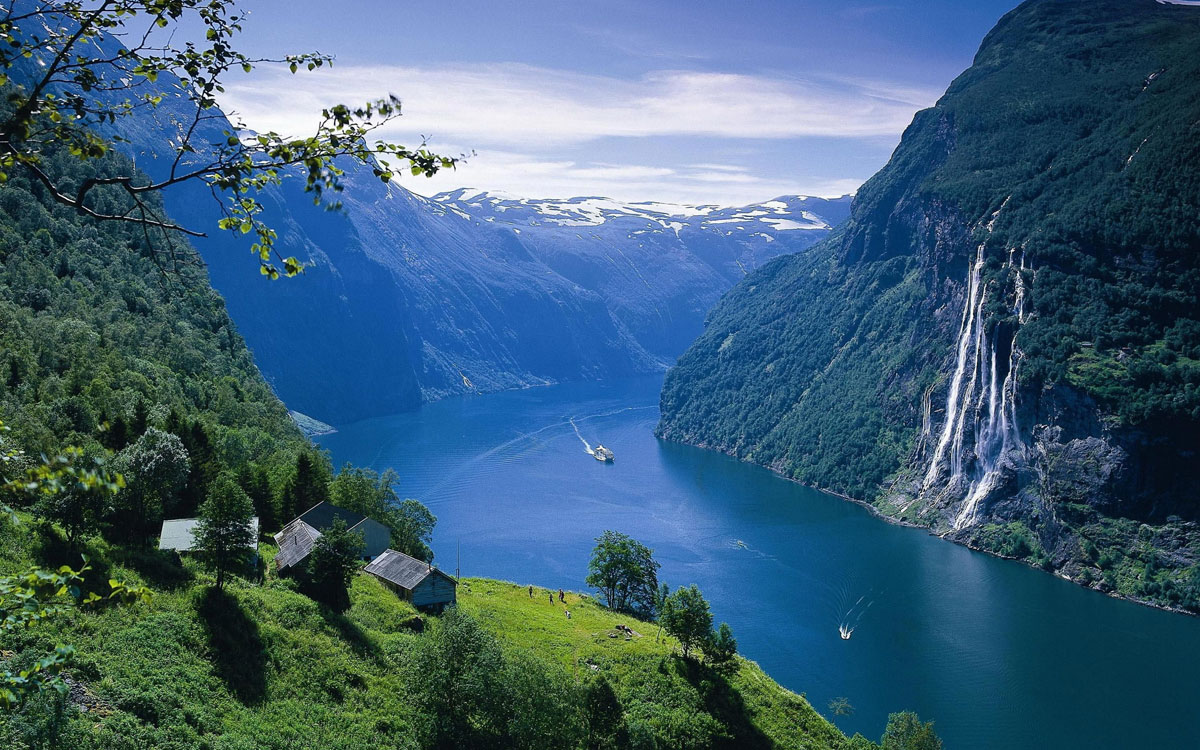 Mardalsfossen waters are used for hydroelectric power, the waterfall flows freely only in summer. So when choosing a time to travel to contemplate the waterfall “in action”, focus on the period from June to August. 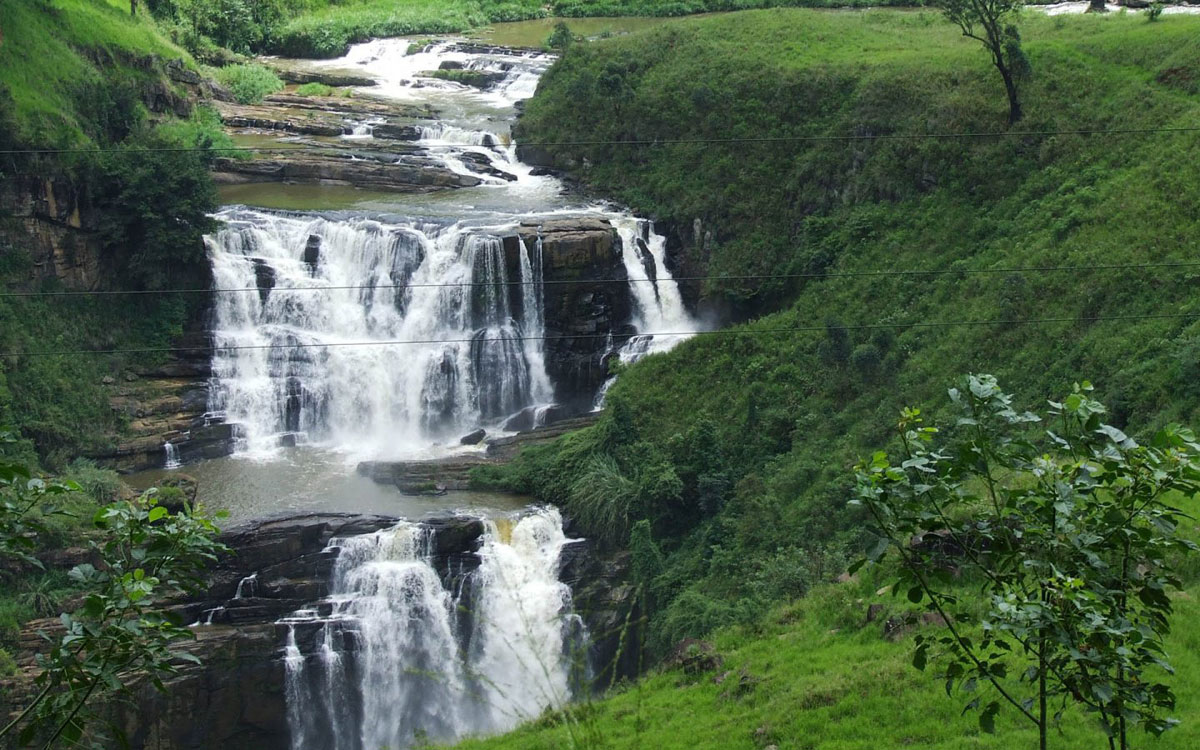 St. Clair Falls is the largest waterfall in Sri Lanka and is nicknamed “Little Niagara”. It is actually 10 times smaller than Niagara Falls. 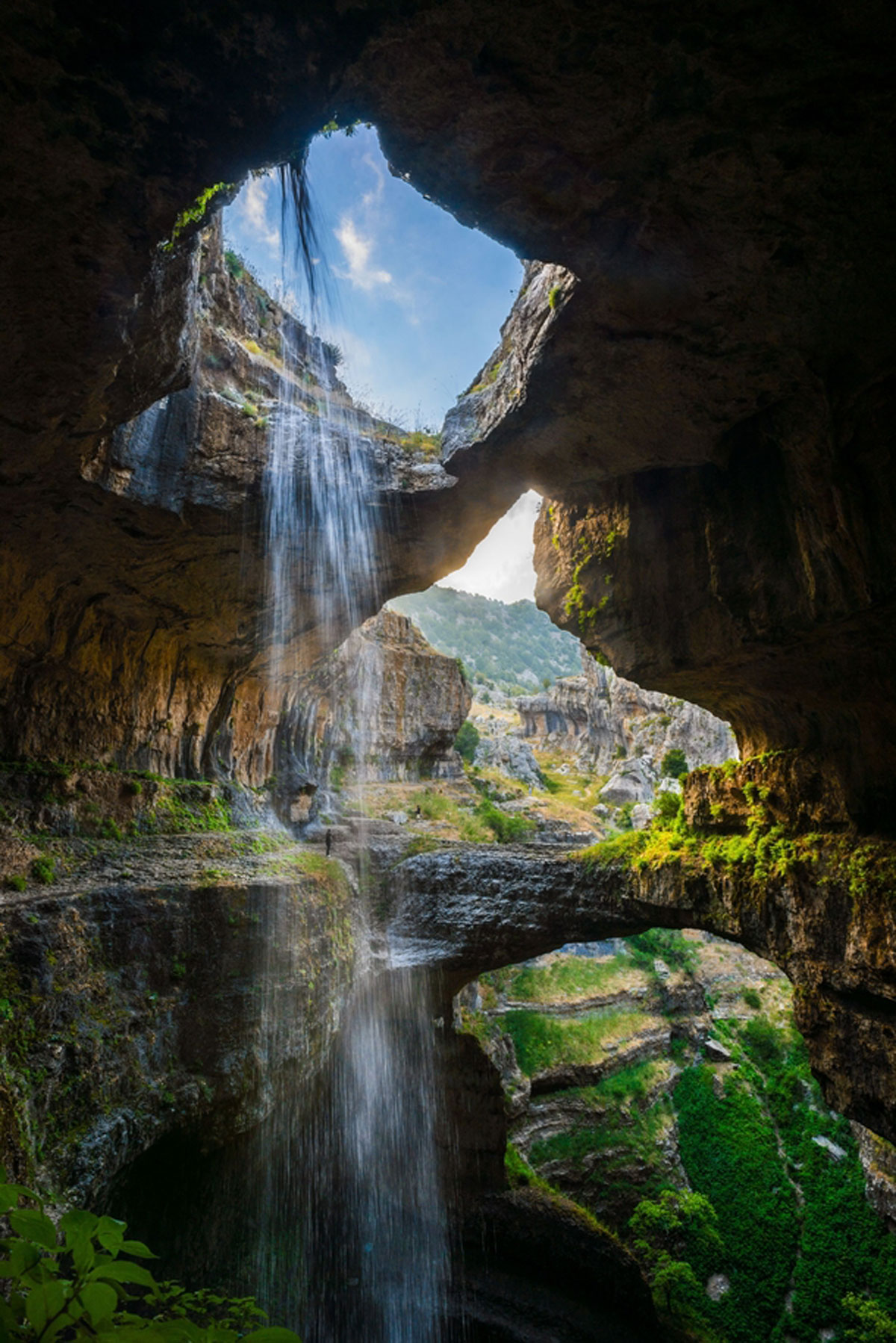 The Ba’atara Gorge falls over 250 meters into the Gap of Three Bridges, a Jurassic limestone cave in Lebanon’s Tannourin region. It was discovered by French speleologist Henri Coiffait in 1952.

13. Niagara Falls, Canada and the USA 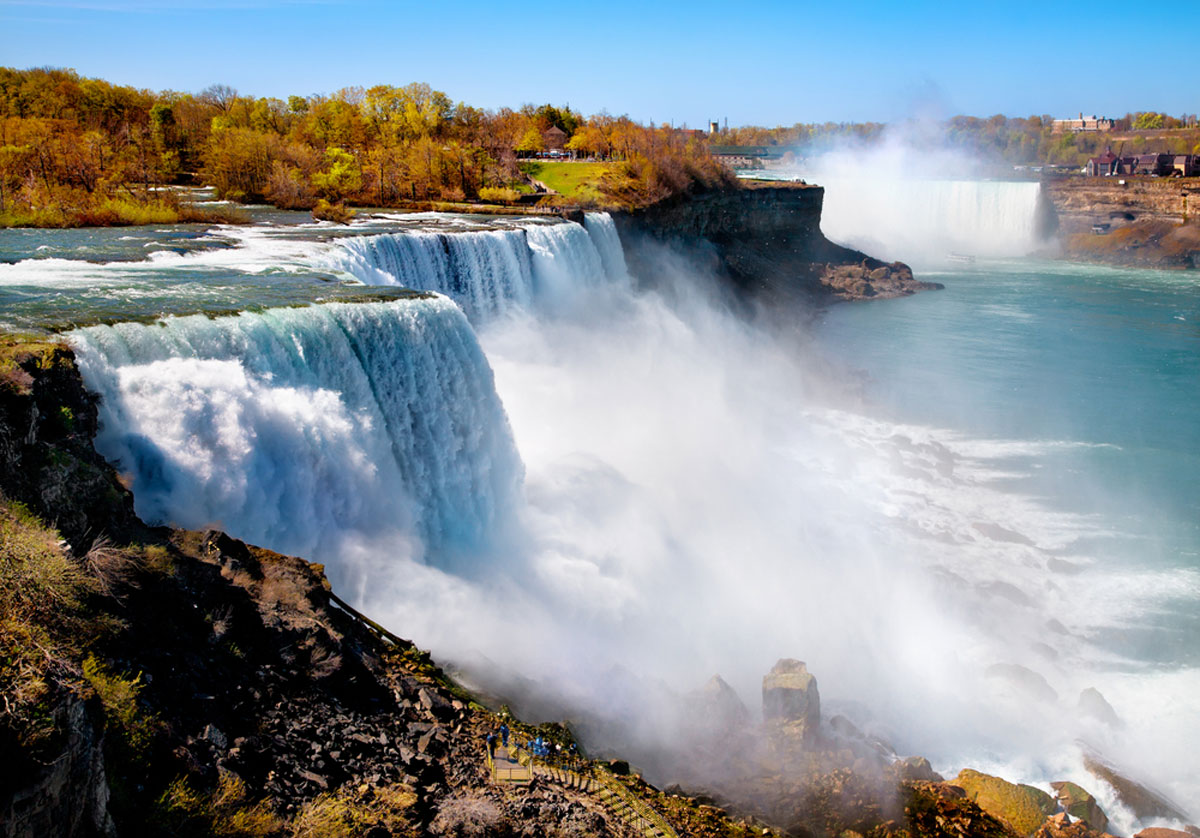 The famous Niagara Falls separates Canada and the United States. World-famous, it never fails to fascinate and attract extremists, who entertain themselves by risking their lives to challenge the powerful flow of water. In 2012, hereditary tightrope walker Nick Wallenda successfully crossed the falls on a taut rope anchored in neighboring countries. 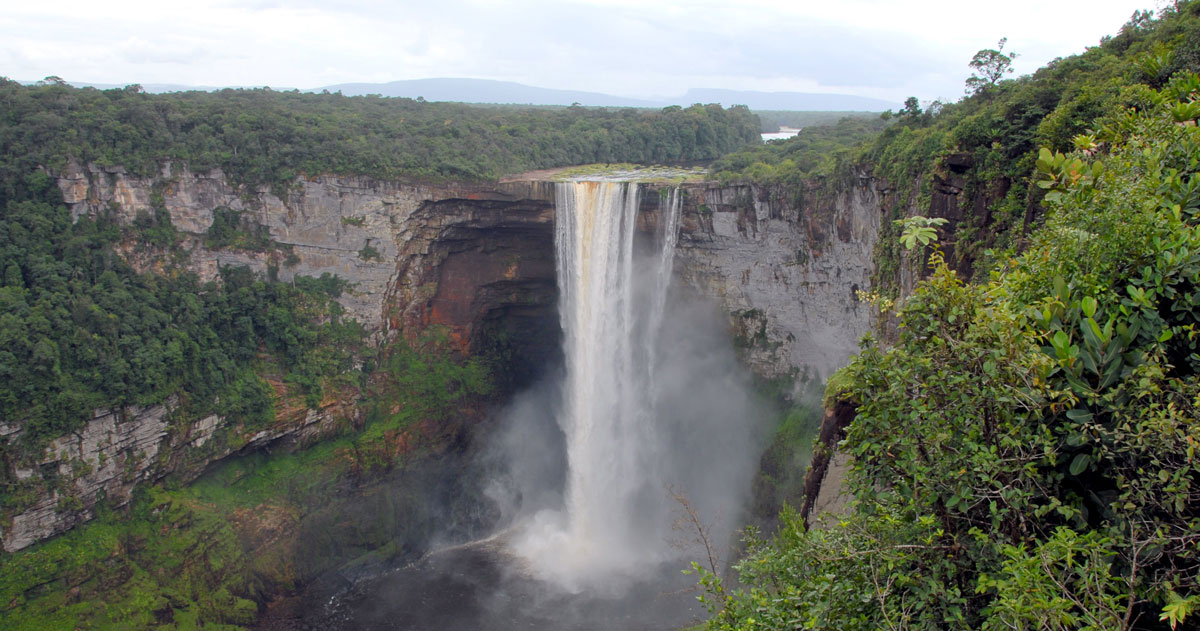 It is about four times the height of Niagara Falls, that is, Kayetour is 226 meters above the ground. Located on the Potaro River, it is named after the great Kaya chief of the Patamon tribe, who sacrificed himself to the great spirit Makonaima to save his people. 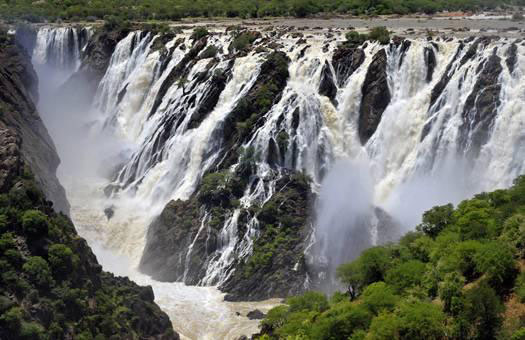 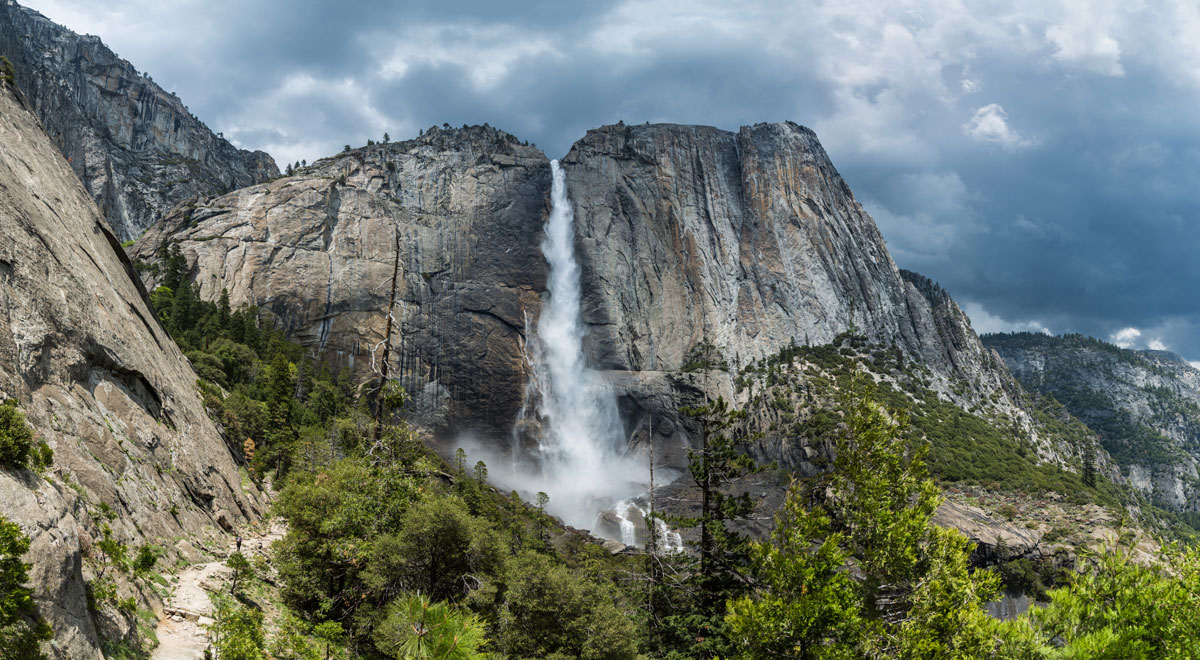 Yosemite National Park in the Sierra Nevada Mountains, California, is the highest waterfall in North America with a height of 739 meters from the top to the lowest level. According to various sources, it is the sixth or 20th highest waterfall on the planet.

READ
The most interesting places in Iceland, photos and descriptions 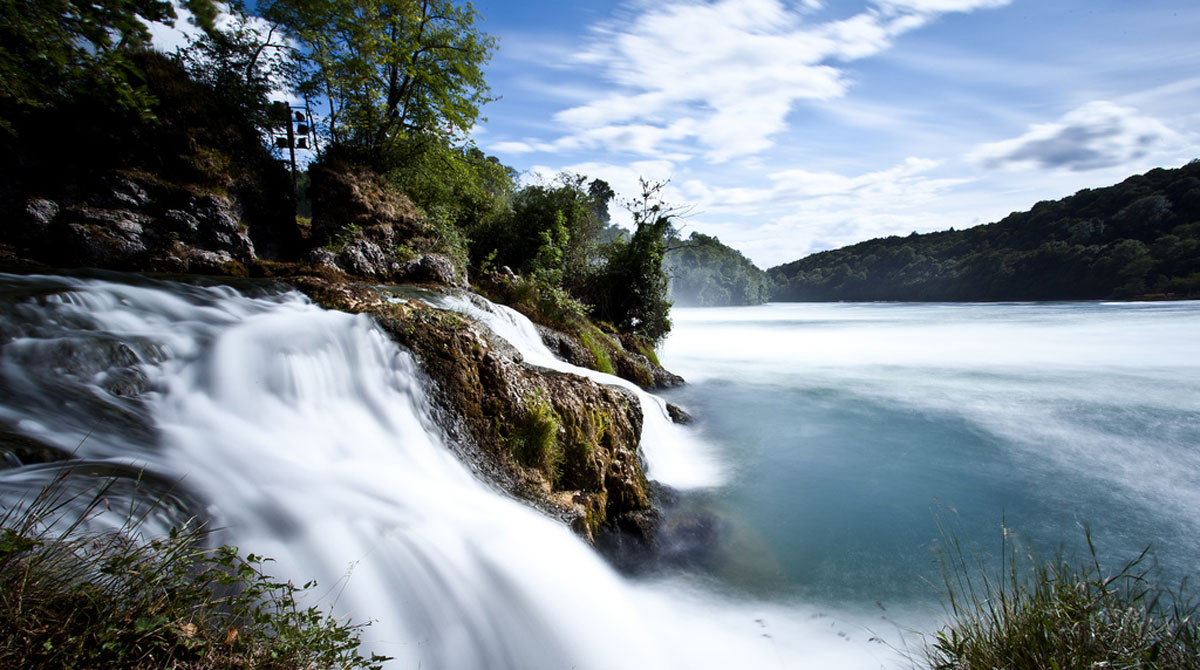 The Rhine Falls are one of the largest in Europe. It stretches 150 meters between the Swiss towns of Neuhausen and Flurlingen, with a maximum height of about 23 meters. 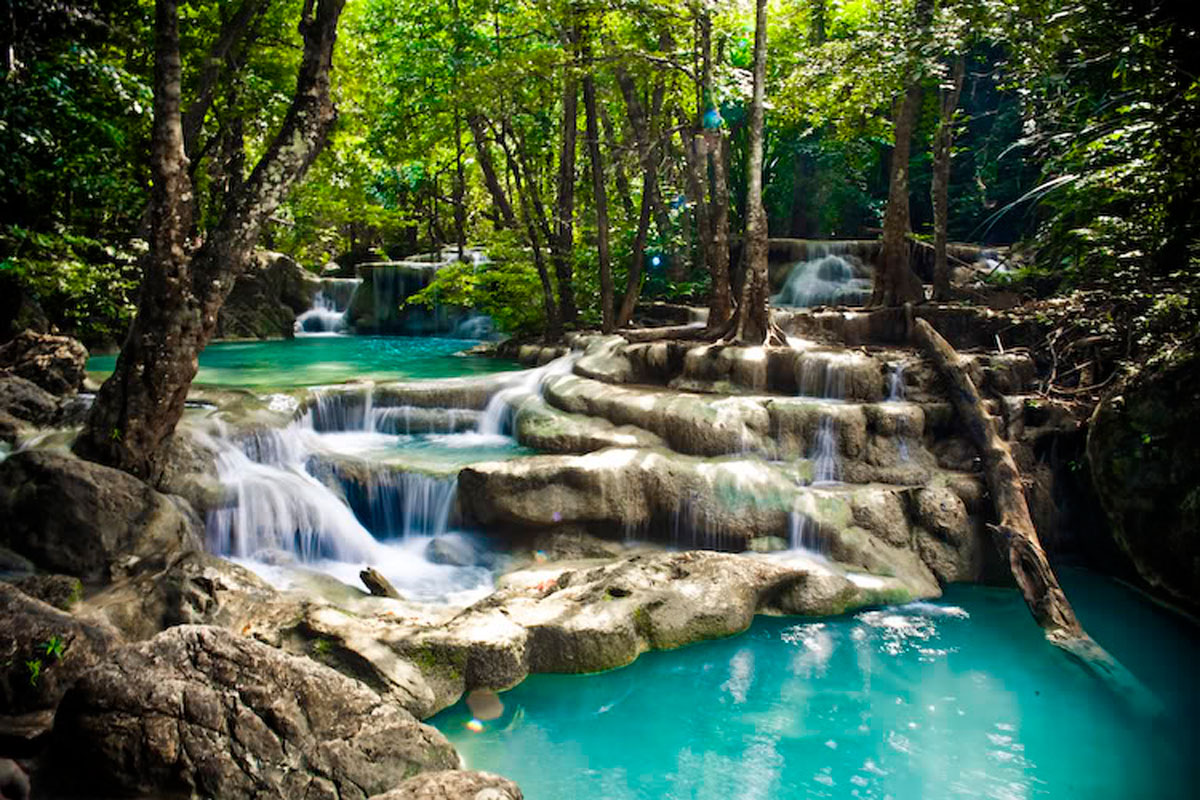 This turquoise cascading waterfall is located in Erawan National Park and is visited by many tourists. In Hindu mythology, Erawan is an elephant with three heads.

Tugela Falls are the highest waterfall in Africa and the second highest in the world (933 meters). It is located in the Drakensberg region of South Africa. 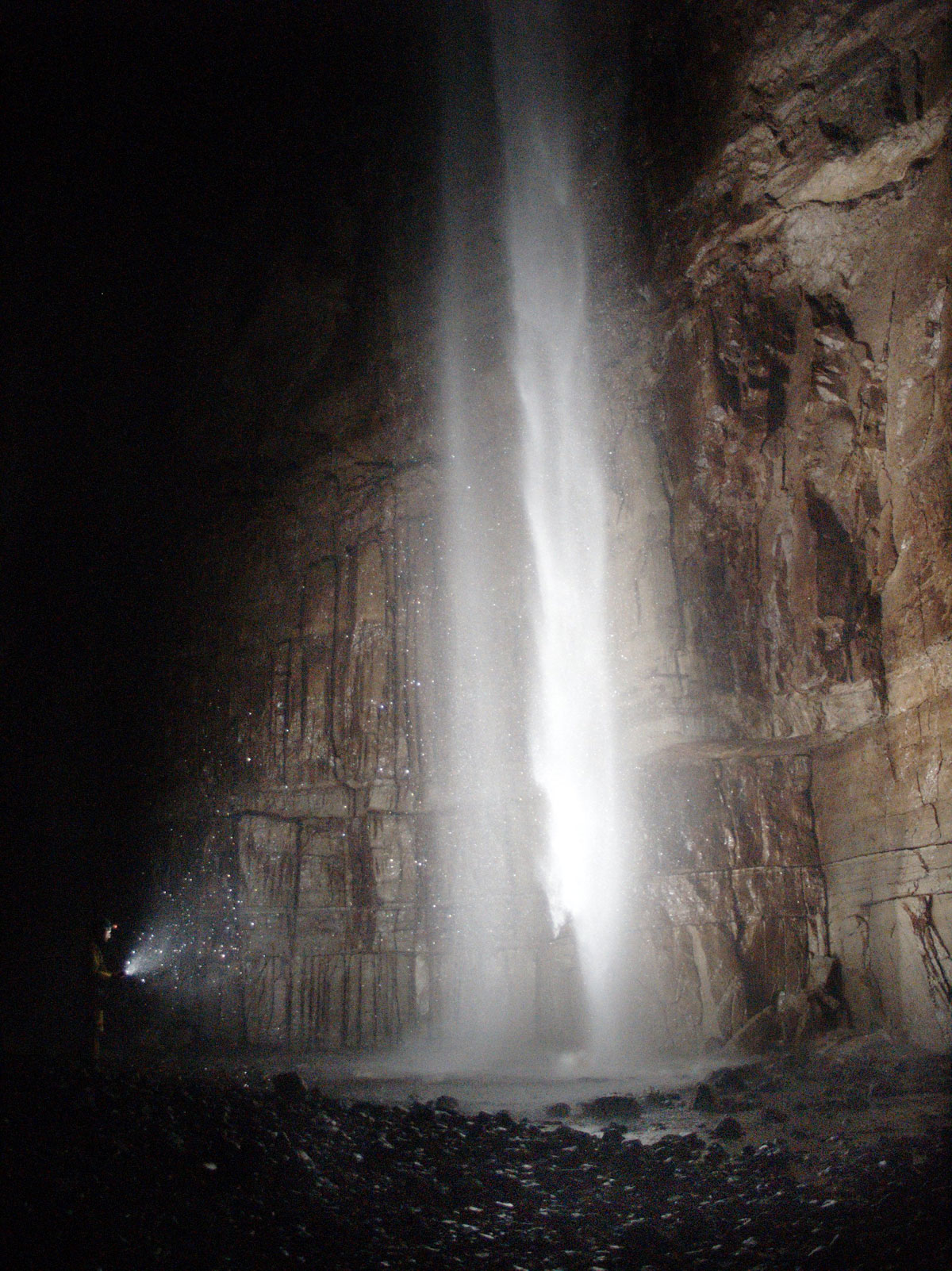 The Gaping Gill is located on Ingleborough Mountain in North Yorkshire, England, in the cavity of Britain’s largest natural cave, which is popular with speleologists. Water falls into this well from a height of 105 meters. 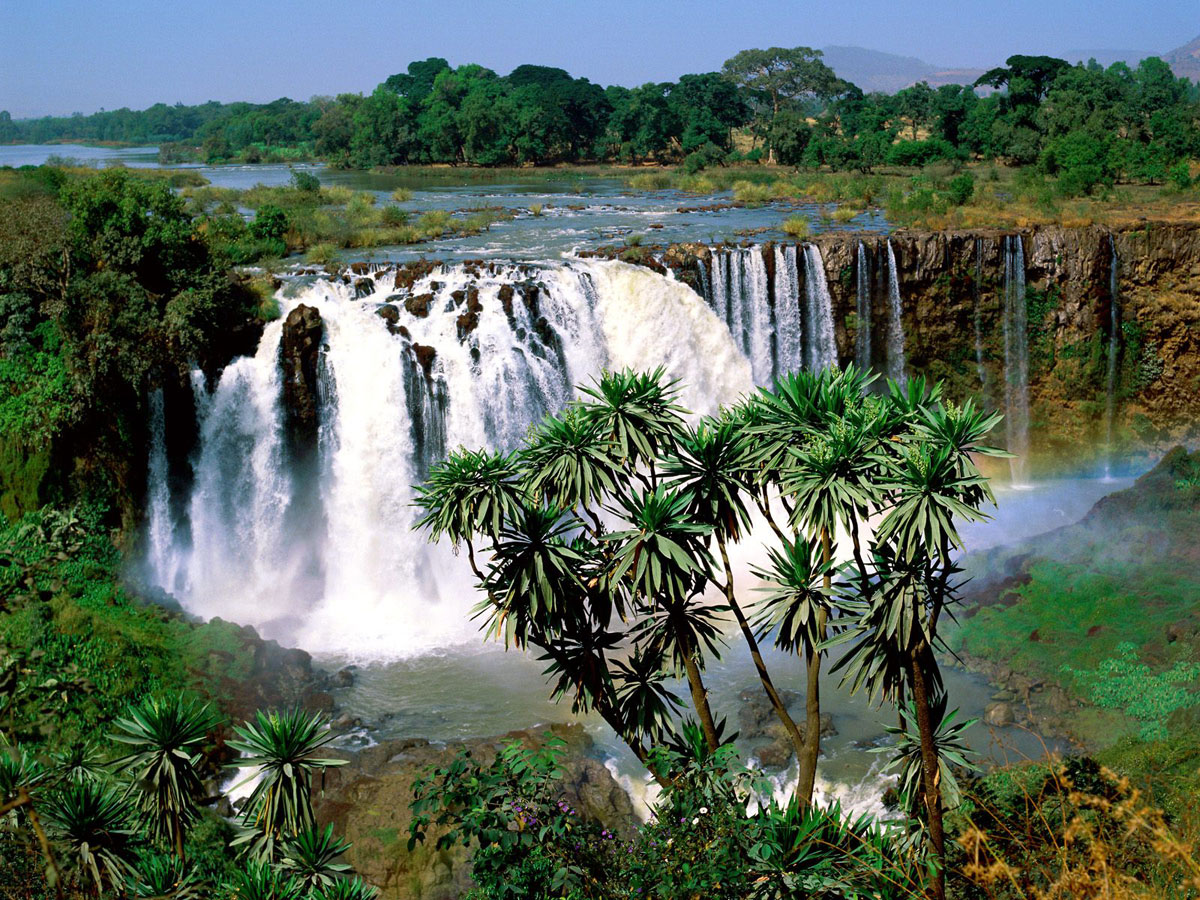 In Amharic, these waterfalls are called “Tis Ysat” and “Tis Abbai,” which means “steaming water.” They are located on the Blue Nile River, a few meters from the first stone bridges built in Ethiopia in the 17th century. 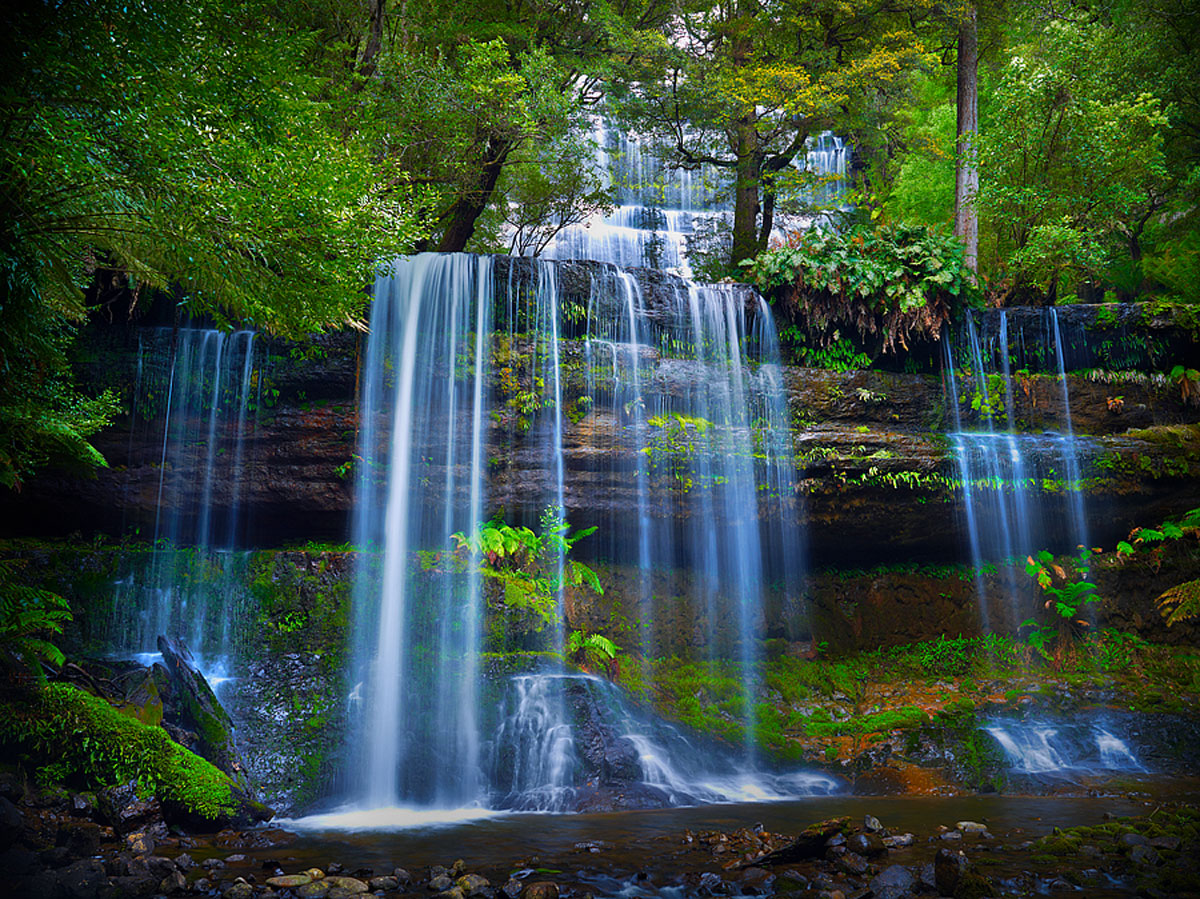 Russell Falls is located in Tasmania, in Mount Field National Park. It was used to illustrate Australia’s first postage stamp in 1899. 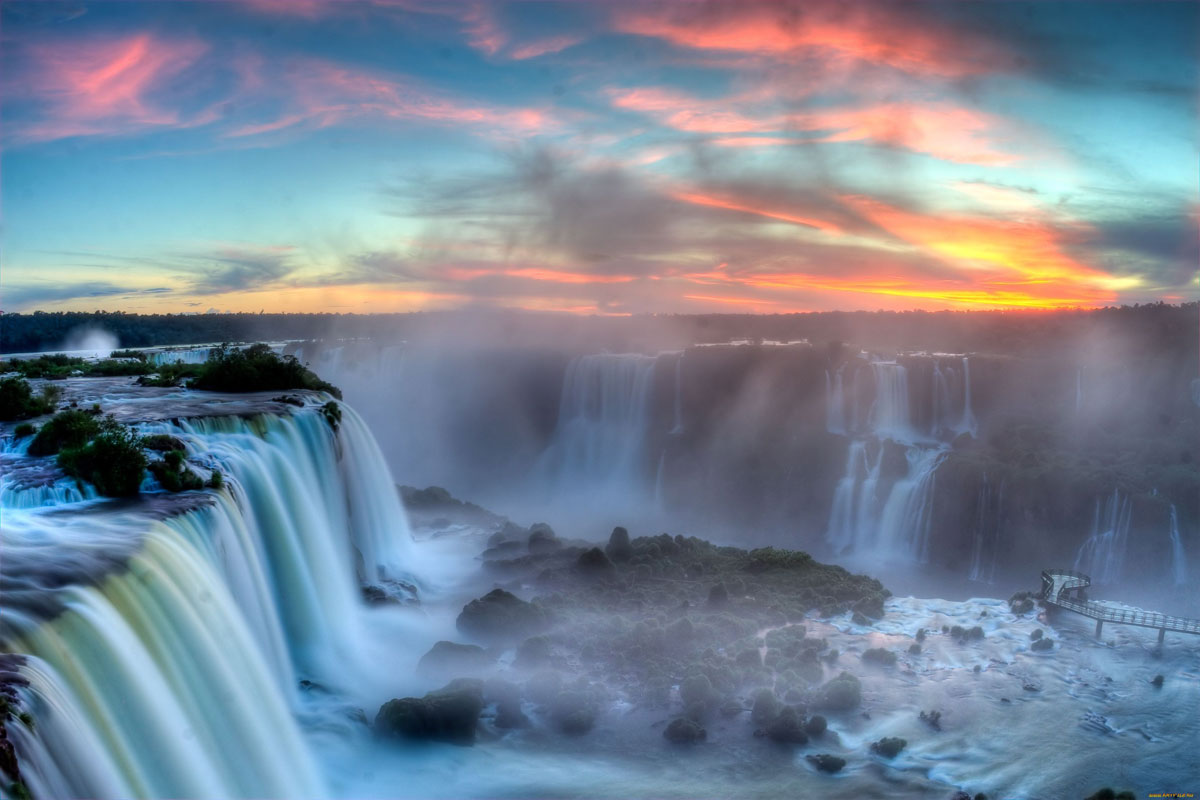 The Iguazu Falls are located on the river of the same name that separates Brazil and Argentina. They consist of several cascades, most of which belong to the Argentine side of the river. However, the most beautiful views belong to Brazil. 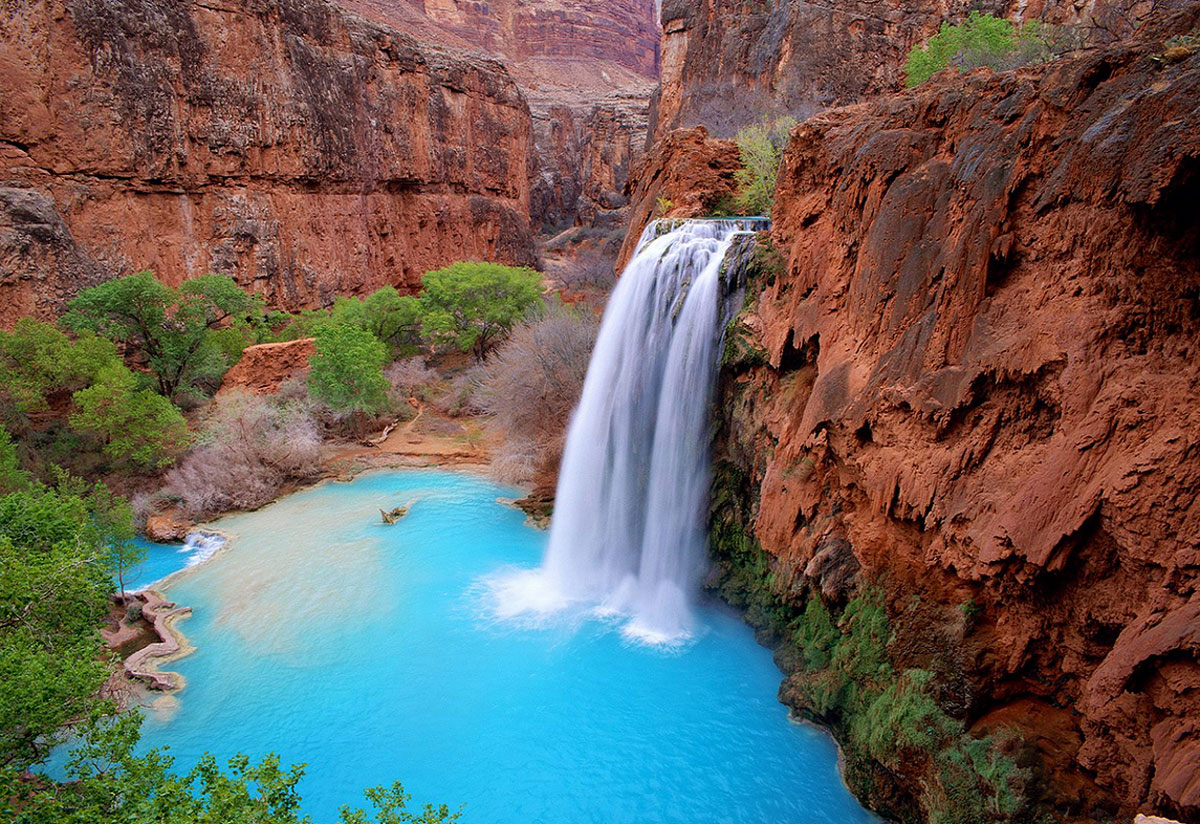 This waterfall is located in Grand Canyon National Park in Arizona, on the Havasupai Indian Reservation, which means “people of the blue-green waters.” This place is very popular with swimmers, as the temperature of the blue waters of Havasupea remains constant throughout the year at 21 degrees Celsius. 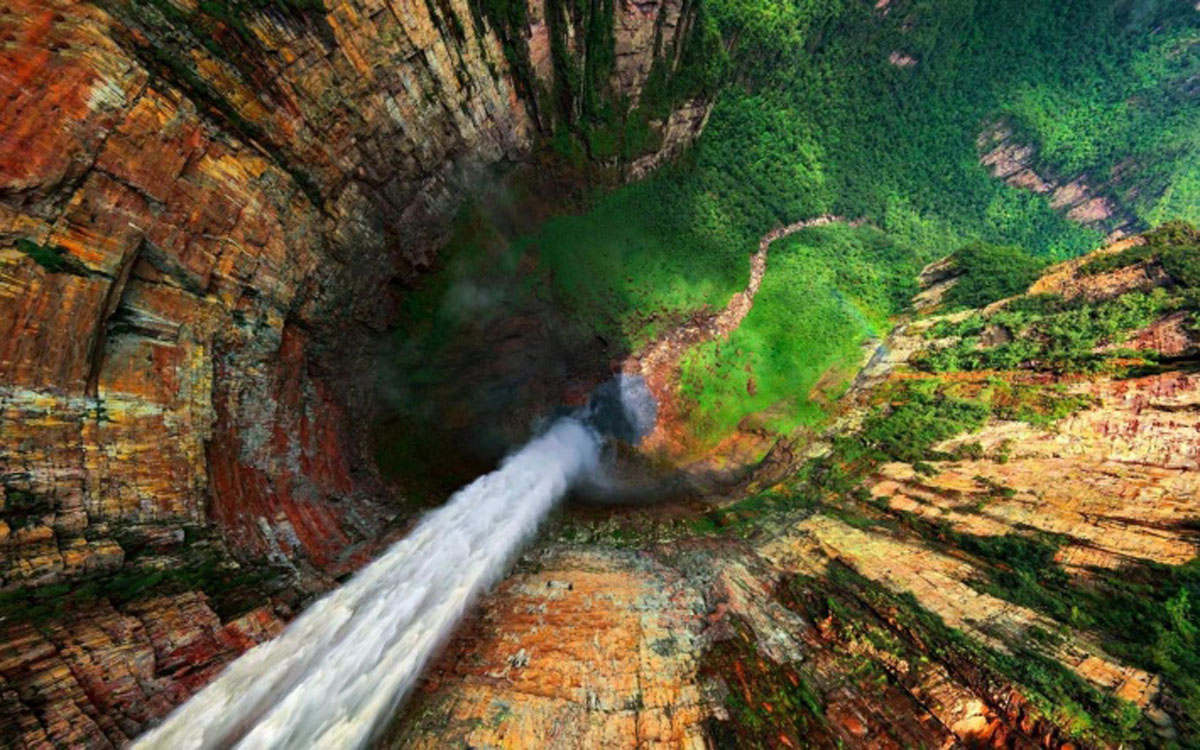 Angel Falls is a UNESCO World Heritage Site, with a height that surpasses the famous Burj Khalifa Tower in Dubai. It tops the list of the highest waterfalls in the world with a total height of 1,054 meters and a continuous drop of 807 meters.