Since the XX century skiing has become increasingly popular. The increasing flow of tourists and the difficulty of climbing led to the need for cable cars. Today, in the age of high technology, the view of “ropeways” has greatly transformed. Now the trip alone is an attraction that tourists are willing to pay handsomely for.

While in the past funiculars were only able to span a small abyss, today these roads stretch for kilometers. Guests travel by “cable car” to different cities, overcome the rivers and conquer the peaks of the highest mountains.

Here is a list of the 10 longest ropeways in the world. 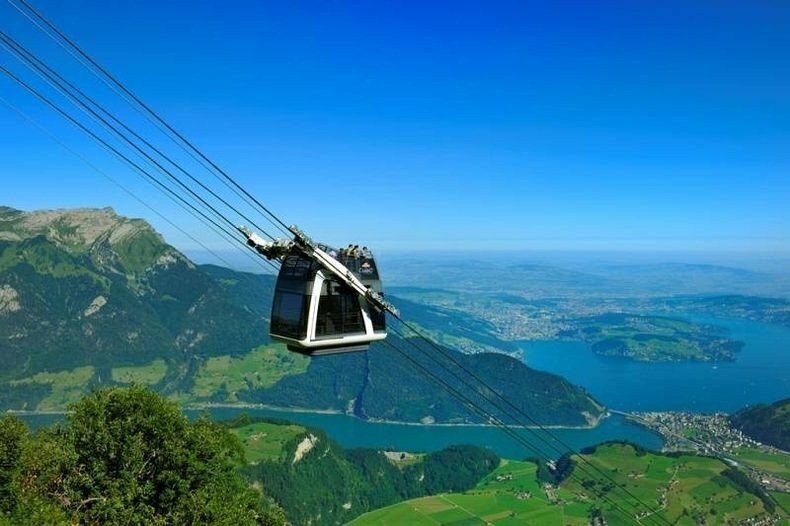 The only open cabrio in the world was built in Switzerland. The double-decker Cabrio starts from the village of Stans and runs up to the peak of the Stanshorn. The speed of the carriage is 8 meters per second, the way to the mountain takes six and a half minutes. In one carriage fits up to 60 people.

From Stans to the first platform goes the very first in the history of cable cars – it was created at the end of the XIX century. Then, from the first station, guests transfer to the cable car. You can take a seat on the first, glazed floor, or you can go higher. On the second floor, with an open platform, tourists can enjoy a breathtaking landscape of the Swiss mountains. 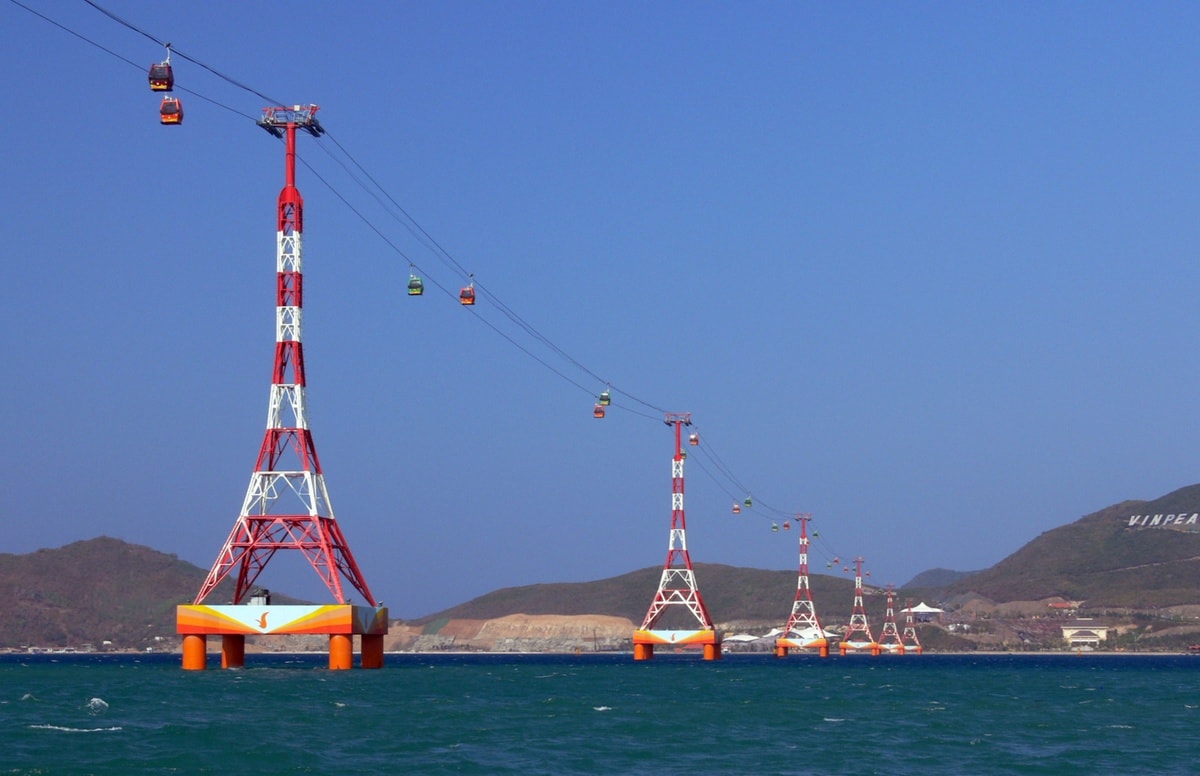 The longest air bridge over the sea in the world belongs to Vietnam. The road connects the land and the entertainment island of Hon Che.

“The ropeway is supported by nine towers, seven of which stand in the water. The speed of the carriages is quite small, so that the road will take a third of an hour. During this time, tourists can relax and enjoy the scenery of Vietnam – the cabin moves at a height of 70 meters above the water, so the view of the sea opens up stunning.

Cableway Whirlpool was created in 2007, it was designed by the Swiss. Design of the structure is also Swiss. In the evenings the lights are turned on, and the towers turn into mini versions of the Eiffel. 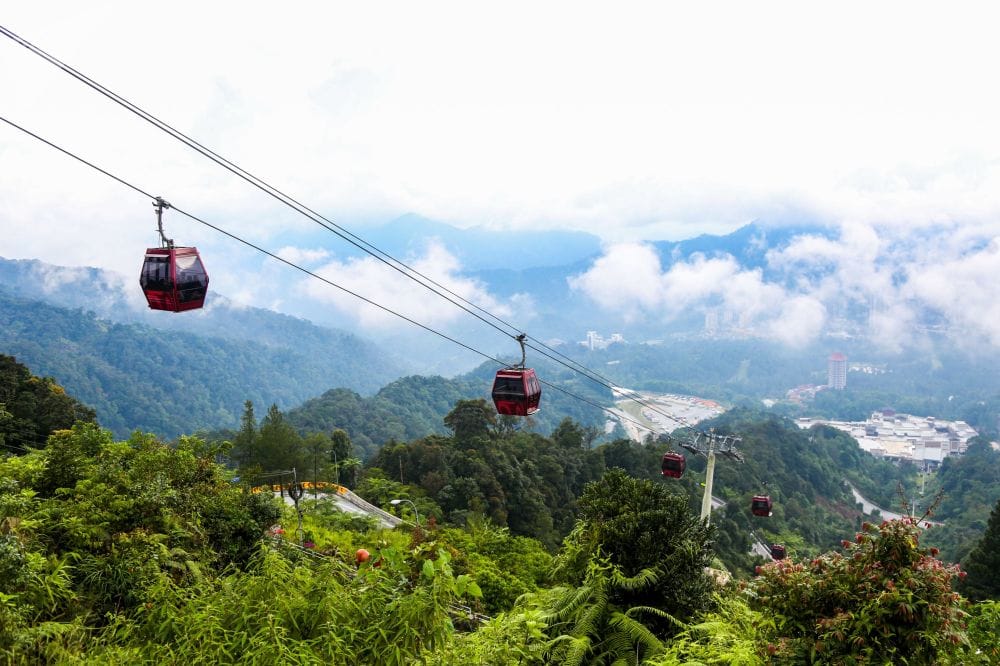 Genting is a Malaysian city-entertainment-complex located atop a two-kilometer mountain. So the best way to get there is by “cable car”.

The Genting ropeway is the fastest in the world. The path of two kilometers will take visitors only eleven minutes. Most of the route goes over a dense rainforest, and a round-trip ticket costs only three dollars. This explains the popularity of the route and the large tourist flow to Genting. 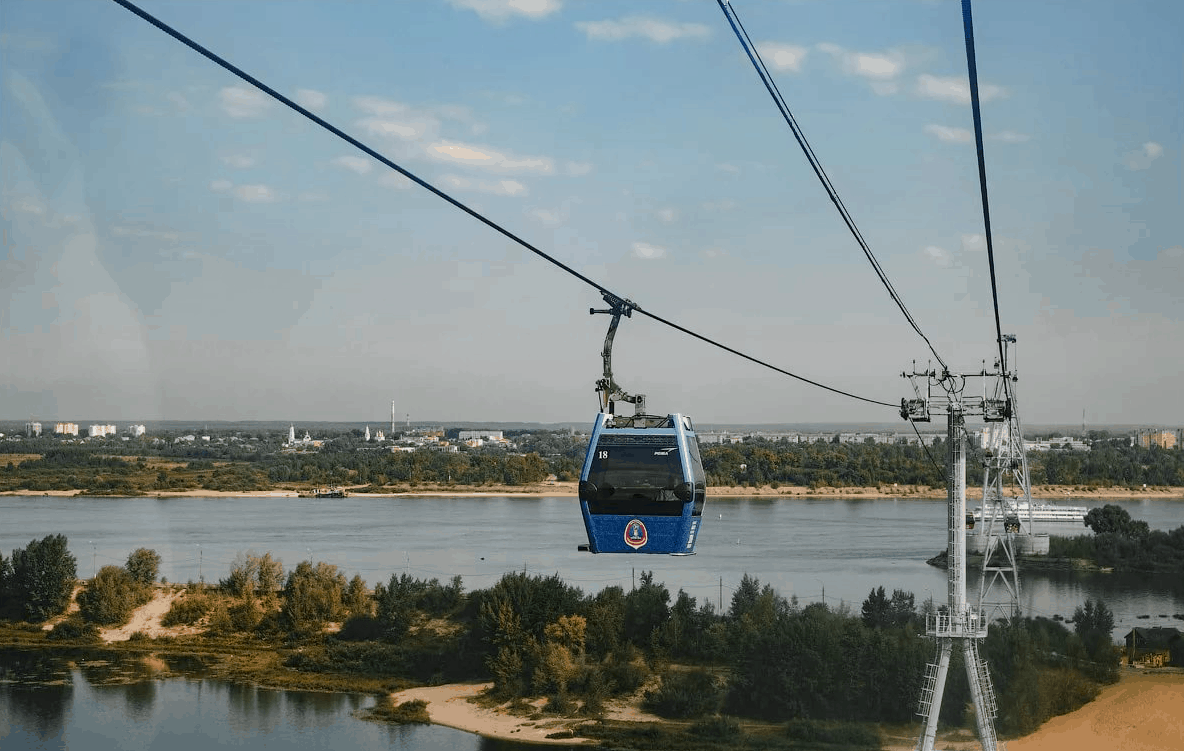 The Volga is known as an ancient and mighty river. Therefore, it is quite difficult and long to cross it. The Nizhny Novgorod aerial bridge was created as a substitute for public transport. It allows you to quickly cross from Nizhny Novgorod to Bor.

Today a ticket costs 100 rubles. To save money, people buy season tickets. There are benefits for students. The capacity of the road is up to 500 people per hour. The average speed of the cabins – from 14 to 22 kilometers per hour, travel time – 12.5 minutes. Nizhny Novgorod “cableway” has the largest unsupported span in Europe – its length is 861 meters.

The project of the road was ordered in France, and the construction structures were created in Russia. The road began carrying passengers in 2012.

There are two landmarks near the funicular. The first is the large Nizhny Novgorod mosque. The second is a historical reconstruction park near the station. The park reproduces an ancient Roman military camp. It is worth seeing with your own eyes. 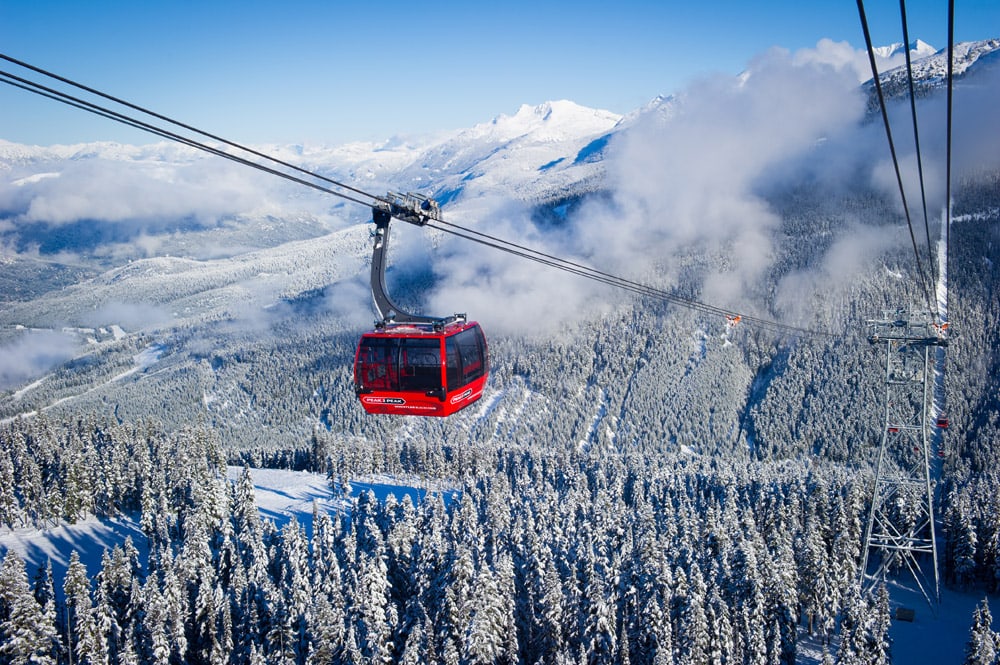 The funicular Peak 2 Peak is located in Canada, in British Columbia. It connects the mountains Blackcomb and Whistler. Locals used to walk up the mountain to ski down. It was long and difficult. The new “cable cars” changed that. With the advent of funiculars, the popularity of ski resorts in the area increased.

READ
The most famous cemeteries in the world

And by the way, the aerial bridge Peak 2 Peak – the highest in the world, it is 436 meters above the ground. In addition, the “ropeway” is famous for the largest distance between the towers. The cabin offers a spectacular view of volcanoes, forests and eternal ice. 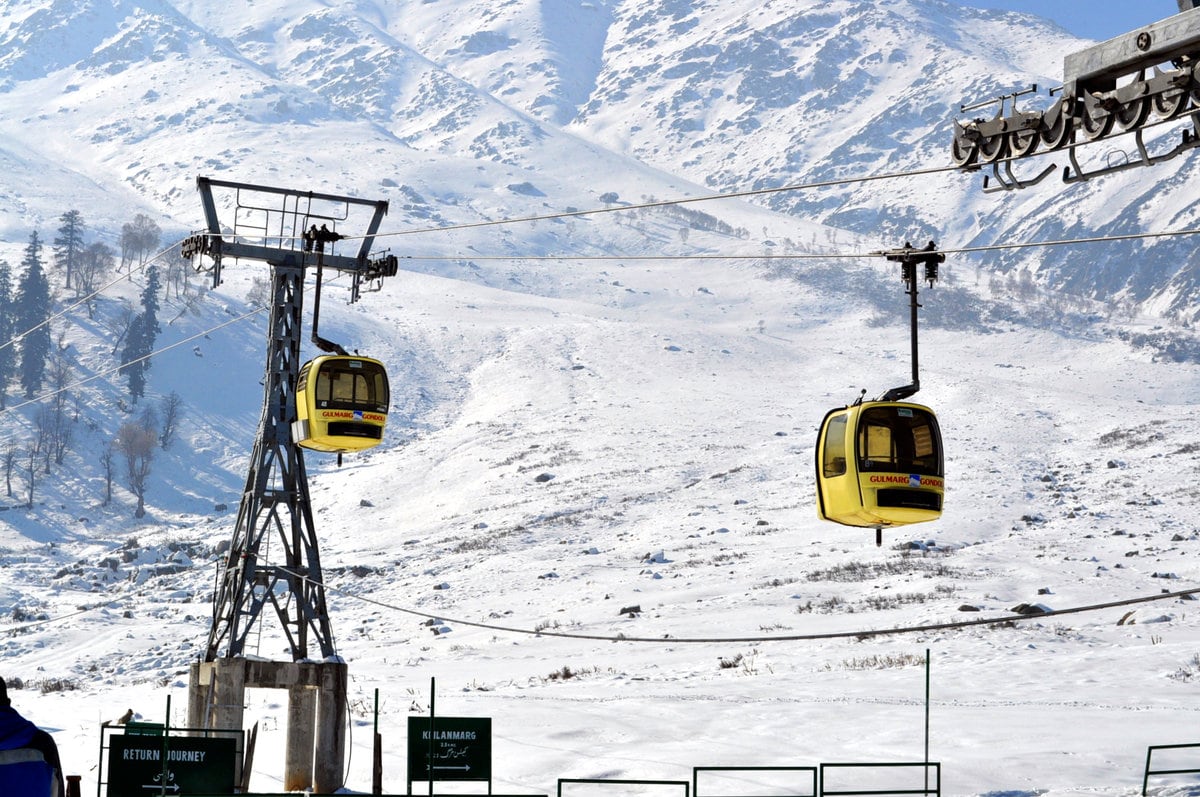 One of the highest bridges is the Gulmarg ropeway in India. Located in the Himalayan resort of the same name. The route is almost five kilometers, and the starting point is located at an altitude of 2.7 km.

The capacity of the road is up to six hundred people per hour. In total, Gulmarg has two stations, and the higher one wants to climb, the more expensive the ticket will cost.

The construction was done by employees of the company Pomagalski in France. “The Gulmarg cable car has been in operation since 2005. 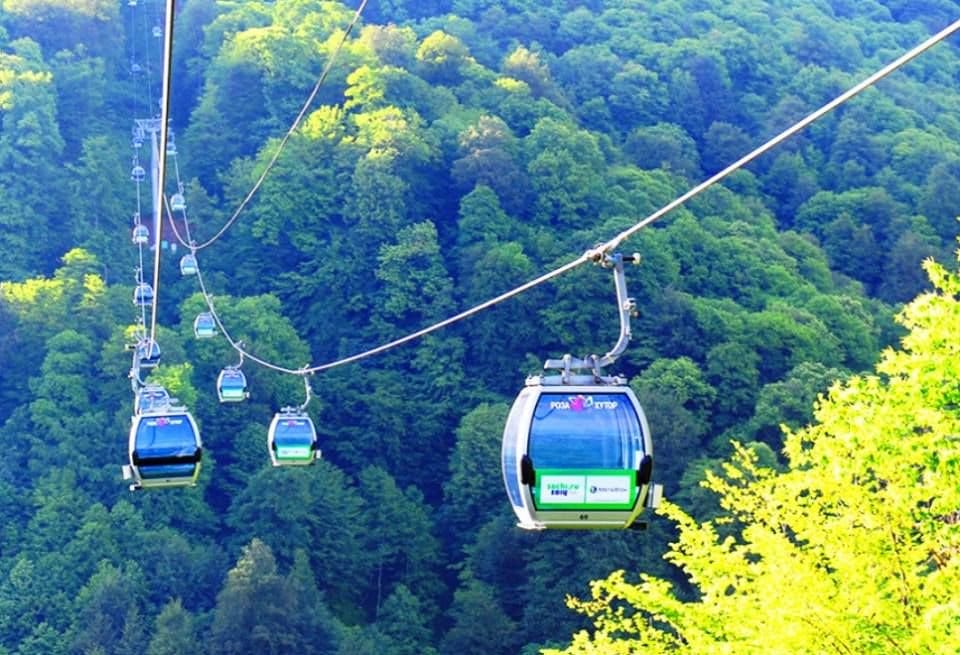 The ropeway with such a strange name is, oddly enough, in Russia, in the city of Sochi. Psekhako-II-A3 is needed to climb the Aibga and Psekhako ranges. “Inspired” to build a ropeway by the 2014 Olympics.

The gondola aerial tramway serves about 3,000 people per hour. Its creators are Rosengineering specialists. Equipment was ordered from Doppelmayr, Austria, and Garaventa, Switzerland. 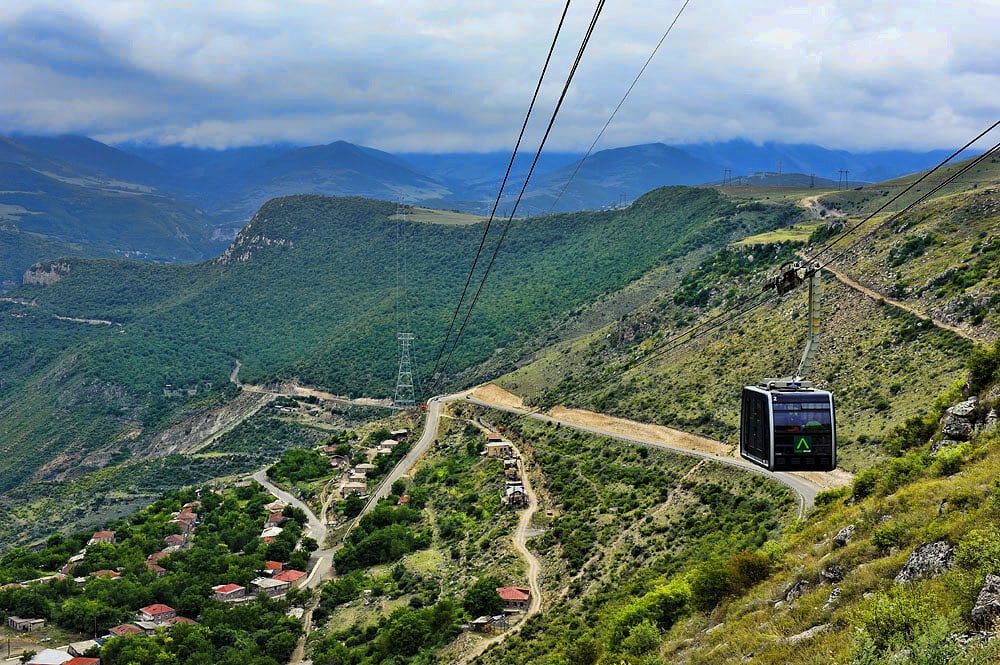 The air bridge is located in Armenia. It stretches over the Vorotan river located at the bottom of a mountain chasm. It connects the two villages of Alidzor and Tatev. Inhabitants of these settlements are free to ride the “ropeway,” while guests pay 6 euros to cross the abyss in one direction only.

Wings of Tatev is a pendulum cable car. The 5.7 kilometers is a world record among such “ropeways”. The speed of the carriage built for 25 people is 37 kilometers per hour, or 18.5 meters per second. Moreover, it was built the fastest in the world – it took 10 months. The project was jointly developed by Austrians and Swiss, and implemented by Armenian craftsmen. In operation since 2010. 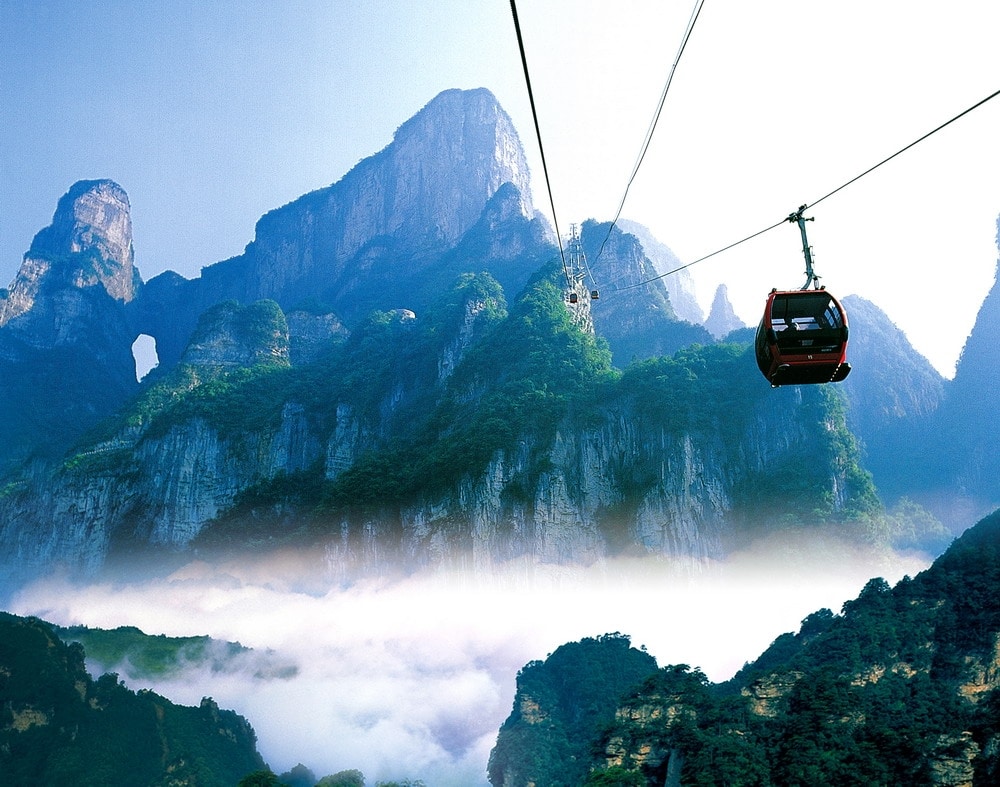 The Chinese cable car takes passengers to the peak of Mount Tangmen. Among the guests there are unusual visitors – wanderers from all over the world come up the funicular. They gather to visit the world-famous Buddhist temple “Heavenly Gate”.

The movement of the cabins is one of the slowest. So, it takes tourists half an hour to go down. So visitors have enough time to enjoy the scenery of China. 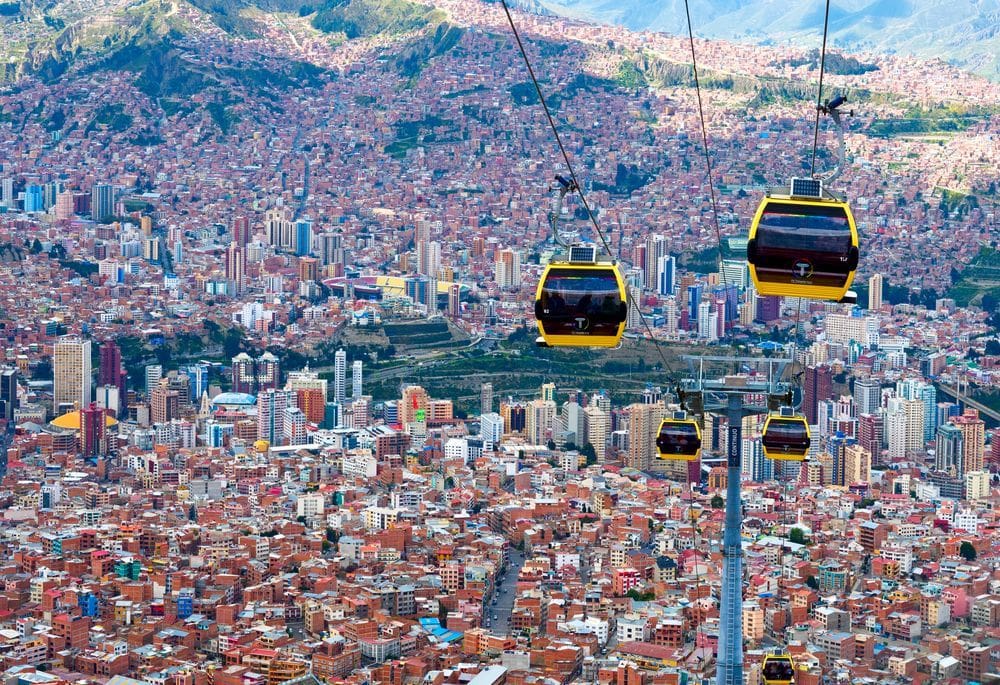 Climbing from La Paz to the mountainous El Alto is no easy task. Bolivia’s Mi Teleférico cable car is a substitute for public transportation. And although the cable car extends for 30 kilometers, the cable car travels that distance in a short time. The journey takes only 25 minutes.

The aerial bridge is brand new – Mi Teleférico has been in operation since 2014. By the thirtieth it is planned to expand. Thus, about 160 thousand passengers travel on this “attraction” in a day. However, from the 30s it will be able to carry up to 300 thousand people a day.

The 10 best cable cars and funiculars in the world 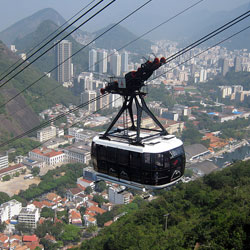 Cable cars and cable cars allow us to discover fantastic bird’s-eye views. Some of these beautiful places would be almost impossible to see from this perspective if there were no cable cars. City cable cars allow you to see breathtaking scenic landscapes and feel like a tourist who was lucky enough to see the unbelievable. We suggest you learn about the 10 best ropeways in the world, to ride which almost every traveler dreams, if of course, is not afraid of heights. 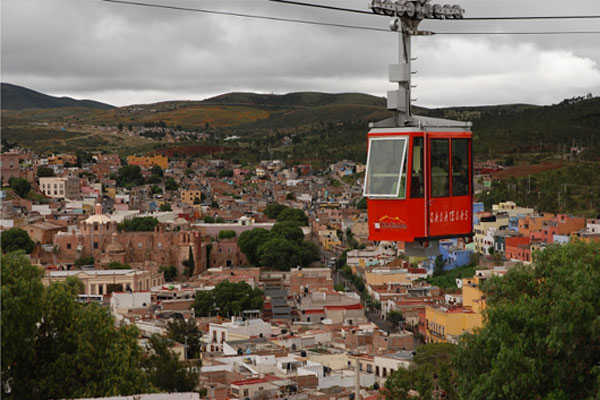 One of the most interesting trips can be a cable car ride over the town of Zacatecas, which is located in the central part of Mexico. This typical Mexican city is colorful during the day and shimmering with lots of bright lights at night.

READ
The most famous underground cities 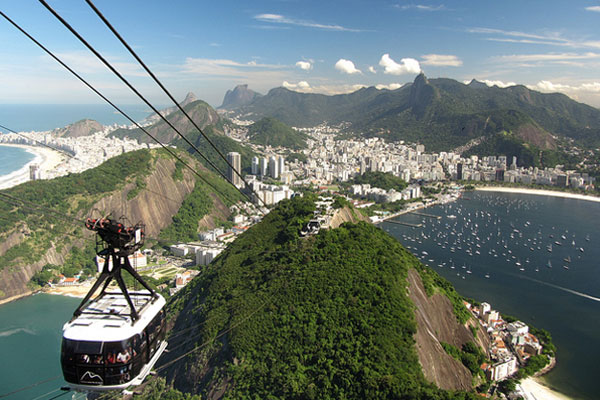 This is another truly unique aerial tramway that you should not miss when you come to Rio de Janeiro. It is a cableway that rides up Mount Sumraloaf, which is 396 meters above sea level. The famous statue of Christ the Redeemer is right on the way, and you will see an amazing view of the city, the bay and the surrounding mountains. 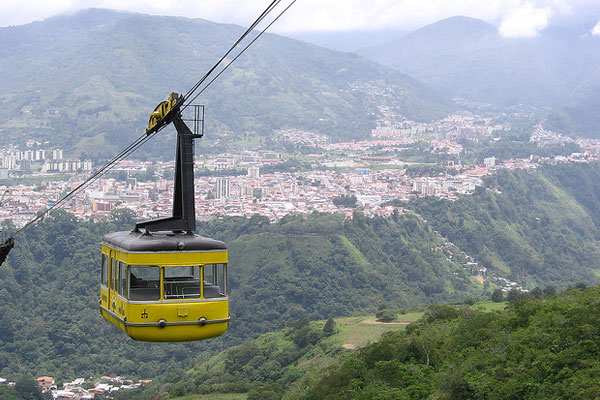 The cable car in the state of Merida, Venezuela, called Telerifico de Merida is the longest and highest in the world. If you like this kind of travel in a cable car stall at a great height, you will be insanely happy to discover the most beautiful places in Venezuela from a great height. The trip starts from a plateau in the Andes and ends at the top of Mount Espejo. The trip there and back takes about 2 hours. 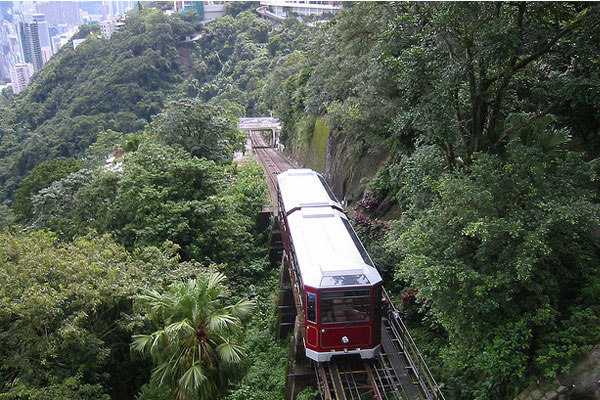 The Peak Tram Funicular was built 120 years ago, and where it climbs, it offers stunning views of the Chinese urban landscape. The streetcar line allows you to see Hong Kong’s skyscrapers from an unprecedented height. The road climbs up to Victoria Peak, and giant buildings run past like toys as you go. 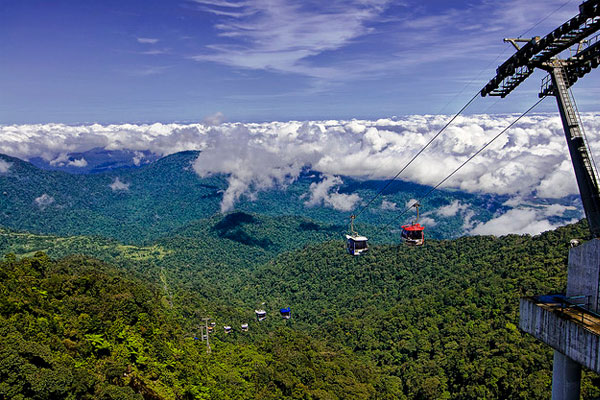 The Genting Skyway aerial tramway boasts to be the fastest aerial tramway in the world and also the longest in Southeast Asia. The end point, the Genting Skyway Resort, will draw your attention with its many attractions, restaurants, holiday parks, stores, hotels and casinos. All this is located at an altitude of 2027 meters above sea level, above the clouds! 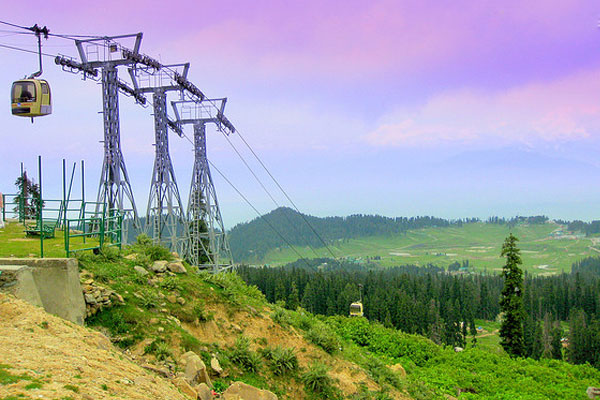 Gulmarg Valley is located at an altitude of 2,730 meters above sea level, but you will not see the sea from it. The town and ski resort of Gulmarg in India are located in the northwestern part of the Himalayas. The cable car leads to an altitude of 3980 meters along an almost vertical plumb line. During the trip you can see the second highest mountain in the world – Chogori.

READ
The most unusual parks in the world, descriptions and photos 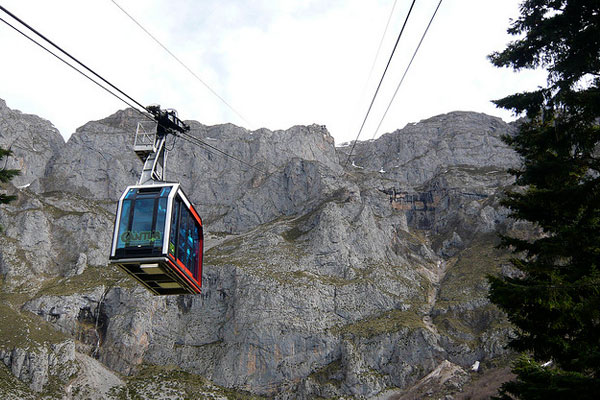 Picos de Europa is one of the most beautiful national parks in the world, located in northwestern Spain. The cable car will help you climb to an altitude of 1,840 meters, revealing the inexpressible beauty of the local scenery – warm valleys and forested mountain ranges. When you get to the top, you will be able to see the mountains and the surrounding area from the height of Mount Aliva. 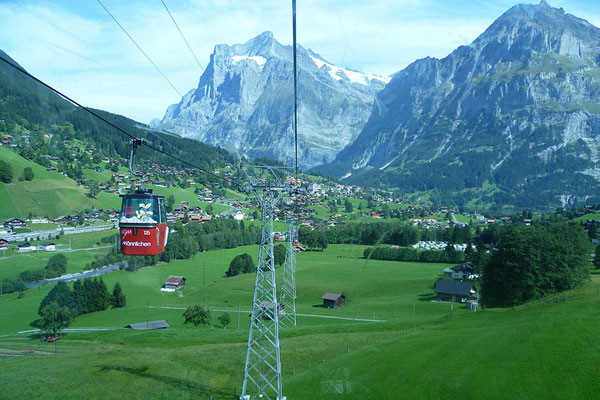 It’s impossible not to mention Switzerland in our list of the best cable cars and cable cars in the world. The Grindelwald-Mannlichen cable car is considered the third longest. It takes about 30 minutes to get from one point to the other, but it will be an amazing half hour in your life! The road runs between a small village at 943 meters above sea level and a ski resort in the Swiss Alps. 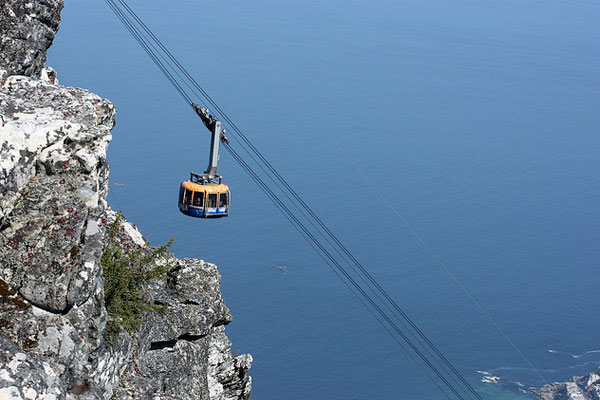 The most interesting thing about this cable car is that its cabins can rotate 360 degrees, so tourists can see their surroundings from either side. Table Mountain, which the road leads to, is so called because of its strange, table-like shape.

10) The aerial tramway in the city of San Francisco, California, USA 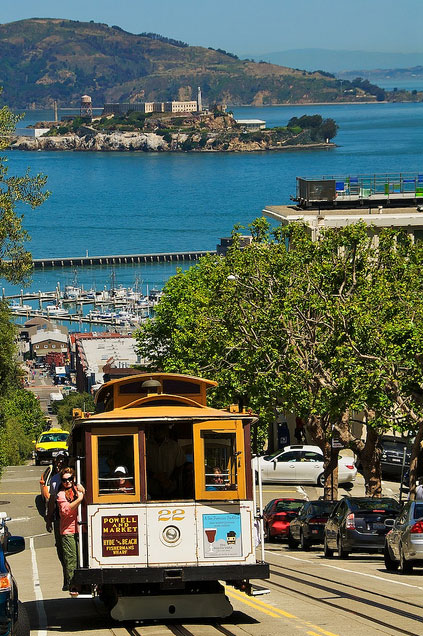 The San Francisco aerial tramway is world famous because it is the last remaining manually operated streetcar. Next door to Russian Hill is a station that connects all the major attractions of the city. Today it is mainly tourists who ride this route.