More than 8,000 years ago, the forces of nature separated two sections of land on which the states of Denmark and Sweden were later formed, but in modern times their shores have been united thanks to the superior skill of modern engineers.

The Øresund Bridge is part of a more ambitious project called the Øresund Region, which is to connect the Danish capital of Copenhagen with the nearby Swedish city of Malmö. The central span with its road and rail tracks and tunnel is called the Upper Bridge – it is the longest cable-stayed bridge in the world. It was built in August 1999, but it was officially opened on July 1, 2000 in the presence of the royalty of Denmark and Sweden. And today the trip from Denmark to Sweden by car takes only 10 minutes. The bridge’s graceful pylons can be seen from afar.

The bridge was designed in the Øresund Consortium by a specially formed team to provide a comprehensive transportation project. Made up half by Swedes and Danes, the consortium acted as owner and contractor. The work was financed by a $12 billion long-term loan, which is expected to be repaid from revenues generated by the bridge’s operation by about 2035.

Architect Rotne’s plans were completed in four years. The bridge crosses the 18-kilometer-long Øresund Bridge in several stages. On the Danish side, the artificial banked island of Peberholm is the beginning of a 3700 m long tunnel leading through the Drogden Passage to Copenhagen. From the eastern shore from Peberholm Island begins the Upper Bridge with a four-lane highway and railroad. It is high enough to allow any ships to pass freely under it.

The Øresund Upper Bridge, in turn, is part of a 7.8 km long composite span. On the Danish side, a 3,014-meter long slope with 22 support segments leads to the shore. On the Swedish side, the descent is 3,739 m long and required 28 such segments. On both sides, the first segment closest to the shore is 8 meters high, and they gradually grow to 65 meters, the height of the bridge itself.

The upper bridge is the “proper” Øresund Bridge, crossing the main channel of the strait. It’s 1,624m long, with a 490m long central cable-stayed opening. Its support structure consists of two massive cables, each 85 centimeters thick, strung between two large piers made of exceptionally strong concrete. The towers are 203.5 meters high, and are thought to be the tallest structures in Sweden. Their cross-section is 9.4 m X 12.6 m at the base and 2.6 m X 5.8 m at the top. The width of the highway and the railroad bed is 23.5 m. On the upper level can move four cars at the same time, on the lower – two railway trains. One-way travel over the Øresund Bridge costs about $53 per car.

Tunnel and the island of Peberholm

On the Danish side, the trip (16 km) over the Øresund begins with a 4 km underwater tunnel, the need for its construction was due to the proximity of Copenhagen airport. The tunnel leads to the artificial bulk island Peberholm (Pepper Island by analogy with the neighboring Salt Island). Peberholm is a kind of transition to the bridge itself, which is 7,845 m long.

In the west and east of the main part of the bridge there are two overpasses 3 km and 3.7 km long.

The Øresunn Tunnel is the most unusual bridge in Europe

Danish capital and the Swedish city of Malmo are connected by the two-story bridge of Oresund. The border passes exactly in the middle of the bridge. And this is not news to you, if you watched the detective series “The Bridge”, which made this engineering marvel a calling card of the two countries. 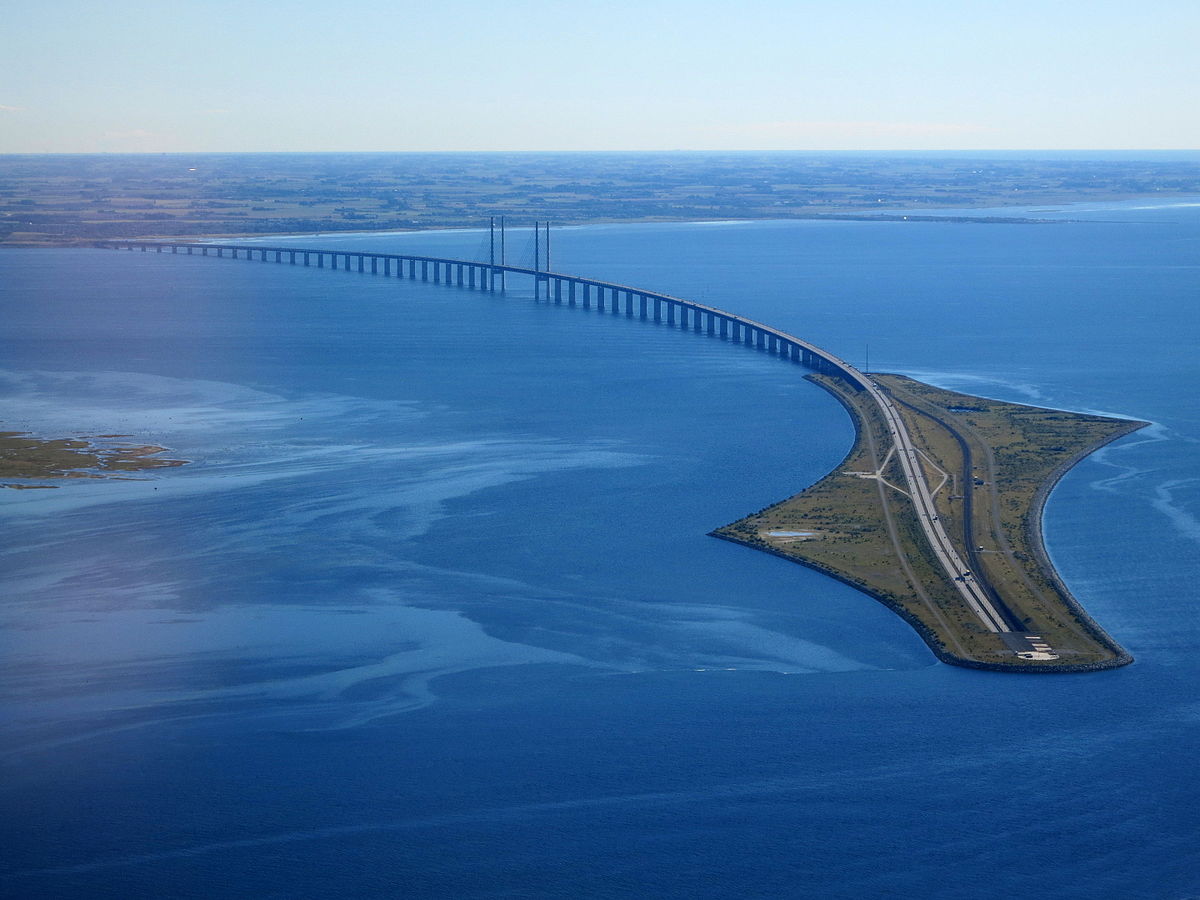 The bridge between Copenhagen and Malmö

This unique construction, with a continuous flow of cars and trains on two levels, is the longest (7.8 km) combined traffic artery in Europe, and part of the major European route E20. One of the merits of the bridge is that it helped the Great Belt to unite continental Europe, Sweden and Scandinavia. In addition, the Øresund Tunnel Bridge is a colorful and photogenic landmark. Especially intriguing is how suddenly it disappears under water. 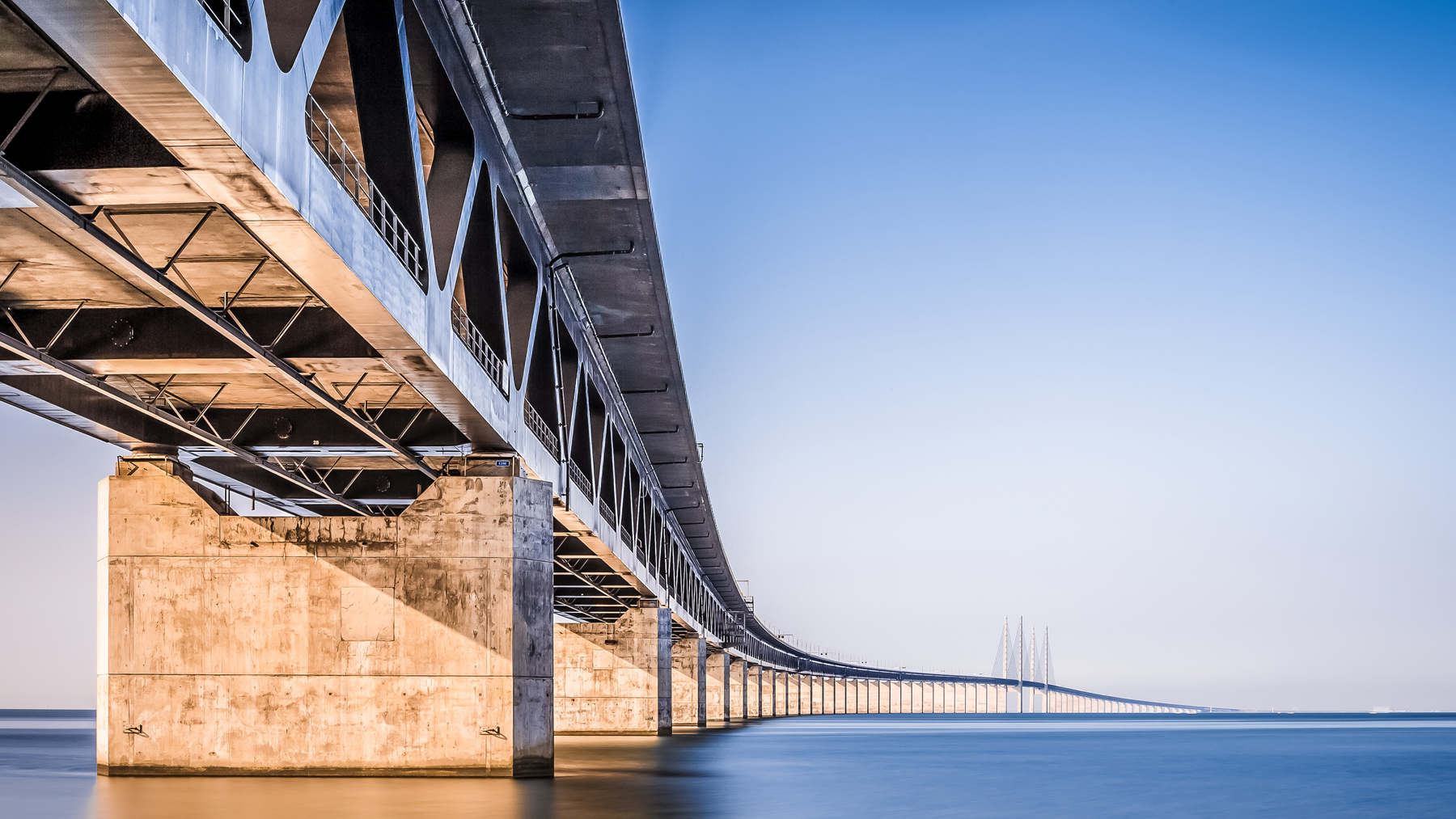 In Denmark it is called Øresundsbroen, in Sweden Öresundsbron, but the company that designed the bridge insists on Øresundsbron, rightly considering this architectural masterpiece a symbol of a region with a common cultural identity.

FACT: The height, width and length of the bridge between Denmark and Sweden, as well as the materials to be used and other details were discussed by a specially formed group of the Øresundsbron Consortium. The consortium, consisting of an equal number of Swedes and Danes, acted as owner and contractor.

How the bridge connecting Denmark and Sweden was built

The idea of joining the banks of the Øresund Strait had been inspiring engineers since the 1930s, but there was no money for such a large-scale construction. They had to be found when the volume of Swedish-Danish ferry traffic reached such limits that the question of a land road was put on the agenda. 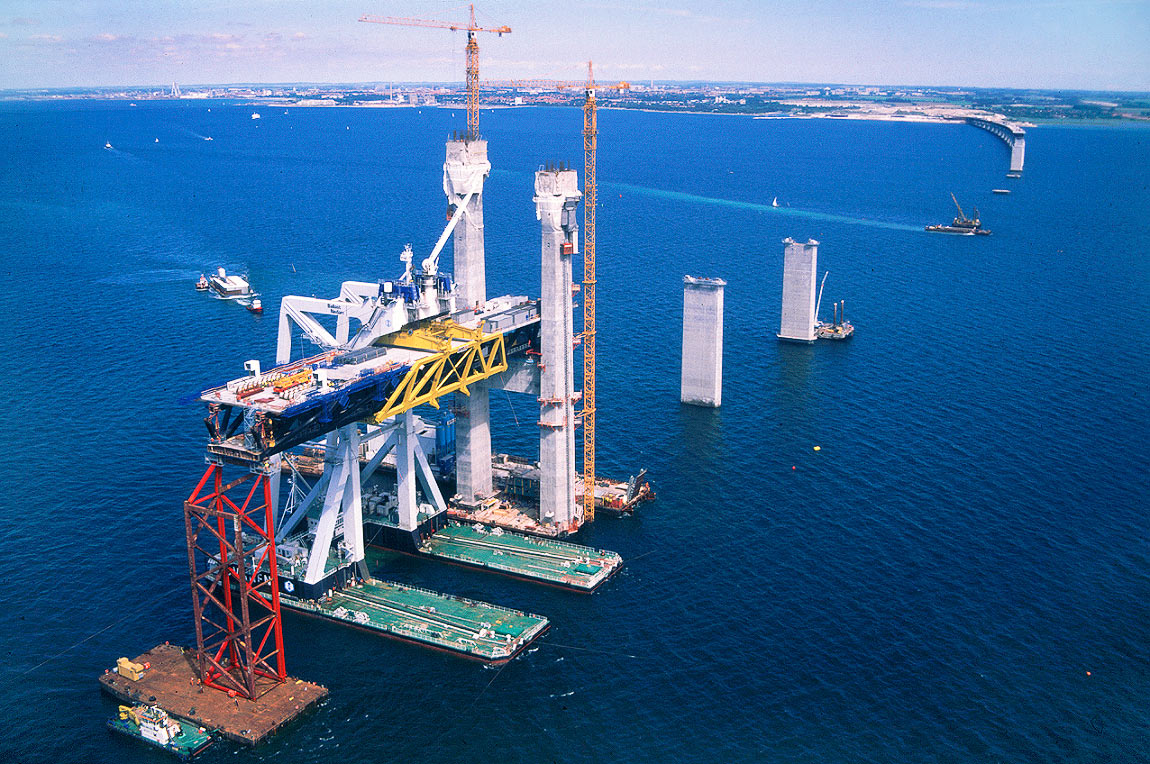 The project was launched in 1995 after numerous studies showed that Saltholm Island, located in the middle of the strait, could not become the reference point for the Oresund Bridge. Construction work and subsequent operation of the structure could have caused irreparable damage to the representatives of the world of birds that live there. Therefore it was decided to build an artificial island, located one and a half kilometers south of Saltholm and received from the inhabitants of Denmark the witty name Peberholm (Pepper Island). 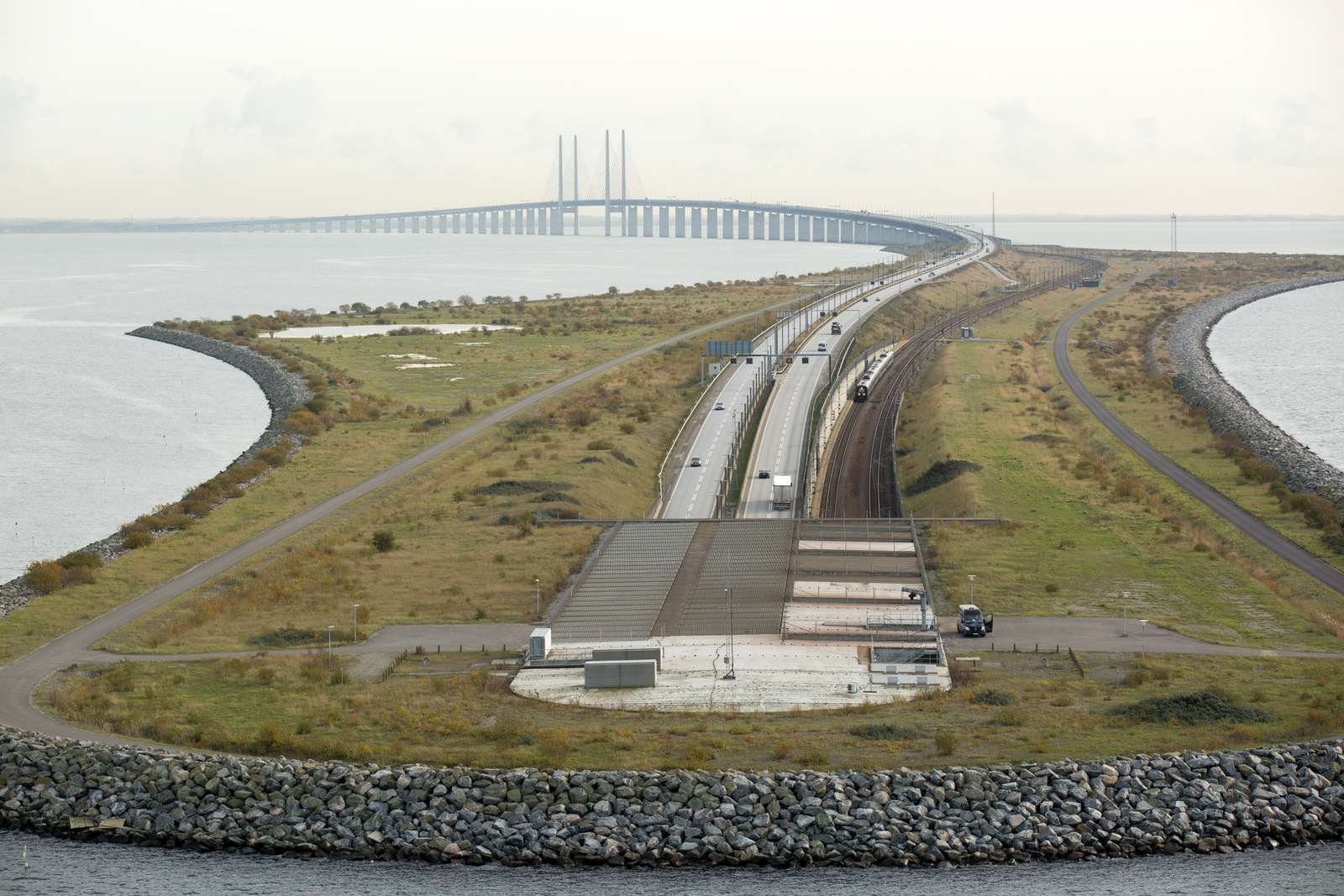 The building material for the island length of four kilometers and an average width of five hundred meters were fragments of rock and rocks extracted during the deepening of the bottom. The island’s hand-made origin has not prevented it from becoming a protected area to which only scientists have access. They conduct experiments here to prove that life can arise and in the territories that have been created artificially. By the way, the experiments are successful, as some kinds of plants have already taken root on the island, and small rodents have settled in. 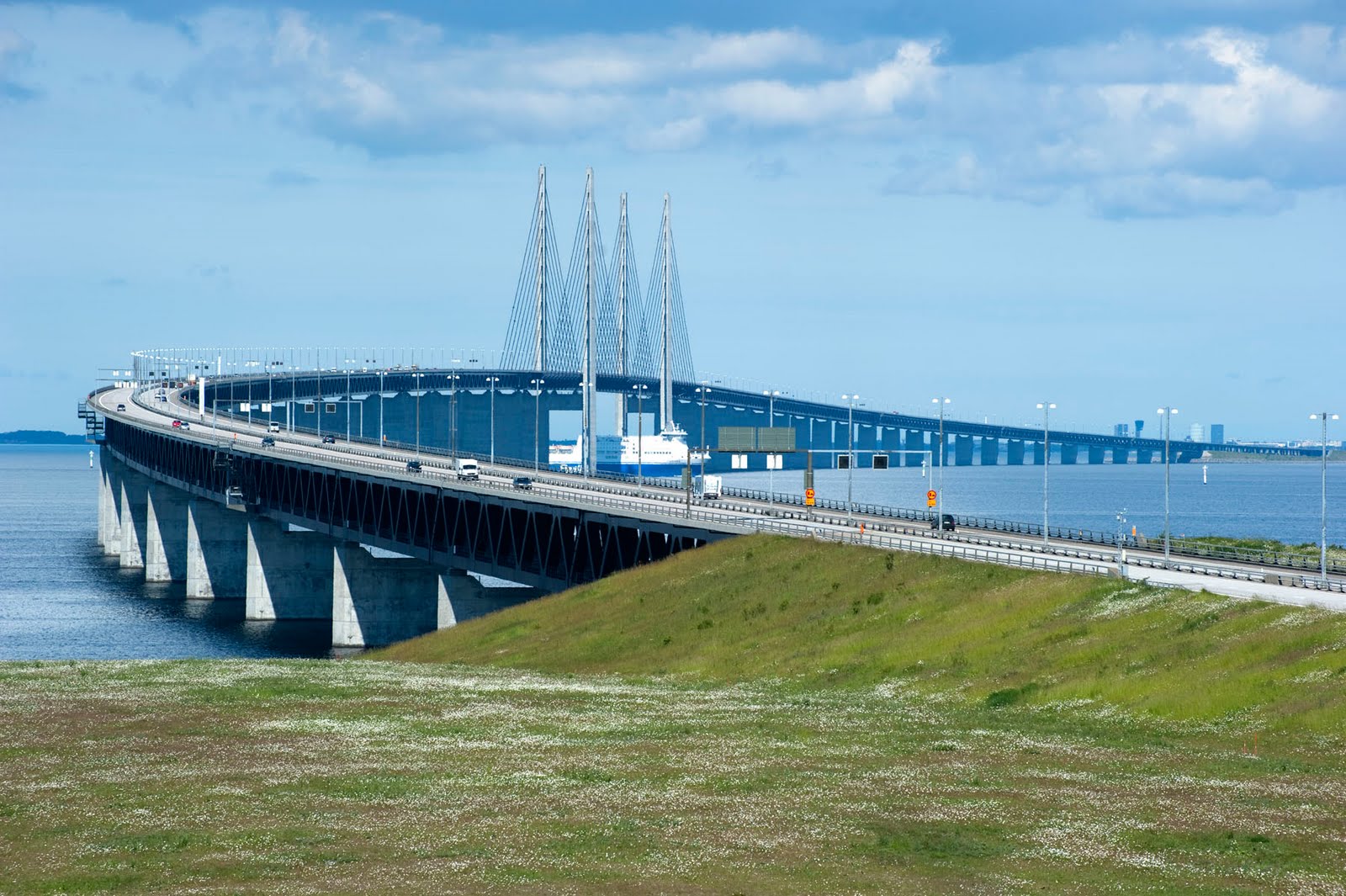 The above-water part of the bridge between Sweden and Denmark begins in Malmö, passes through Peberholm (3.7 km) and dives into the tunnel, which ends in the east of the Danish capital, near Kastrup Airport. Its existence was the main argument in favor of the construction of the tunnel. The aisles and pylons, without which shipping traffic would have been impossible, could have prevented planes from landing in this area incessantly. 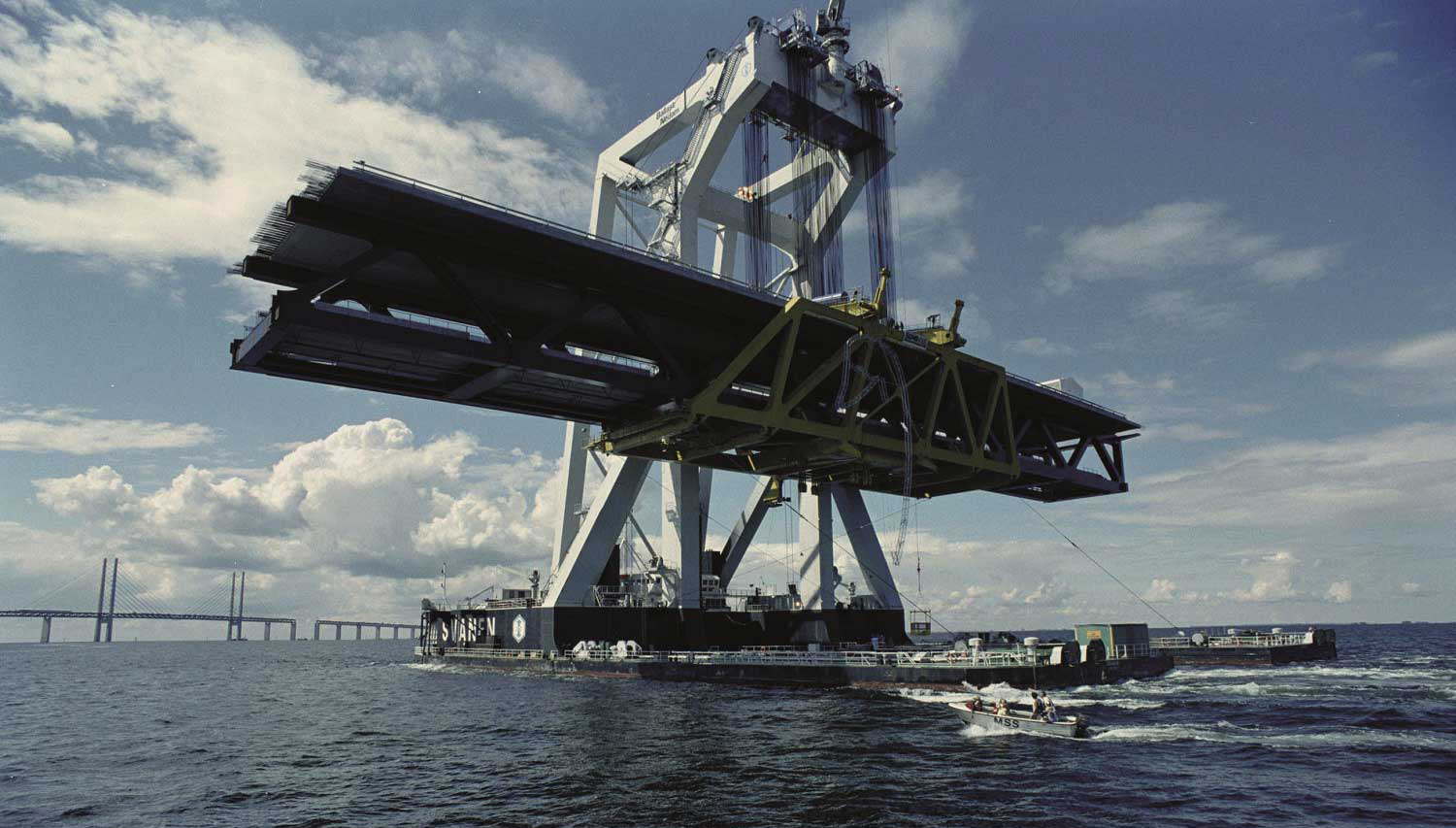 Construction of the Malmö-Copenhagen Bridge began in the mid-1990s, and all was well until workers stumbled on World War II ordnance at the bottom of the strait. Their safe disposal took a lot of time and effort. Besides, inaccuracies in engineering schemes provoked warping of one of the parts of the construction. But even these difficulties didn’t prevent the project from completion four years later. July 1, 2000 is considered the day of the official opening of the bridge, when it was visited by the reigning monarchs of the two countries.

The bridge between Denmark and Sweden, which all tourists want to take a picture of, is truly a mega-building: 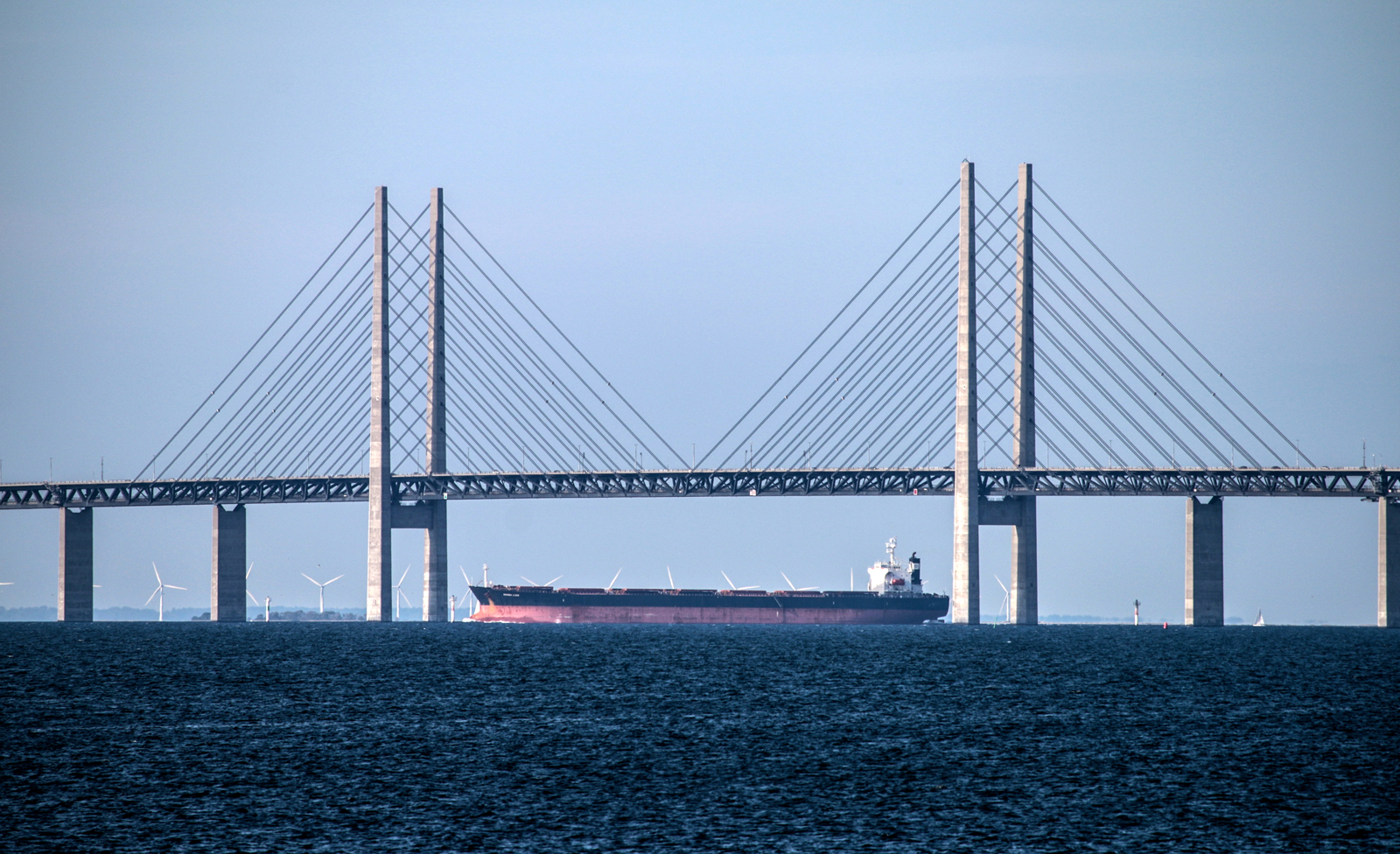 While for residents of Sweden and Denmark the Øresund Bridge and the underwater tunnel are already commonplace, travelers have something to be surprised about. Already on the way to the Copenhagen airport you will see an amazing picture: a giant bridge with trains and cars suddenly “dissolves” in the water. For the unprepared person this “trick” makes an indelible impression. 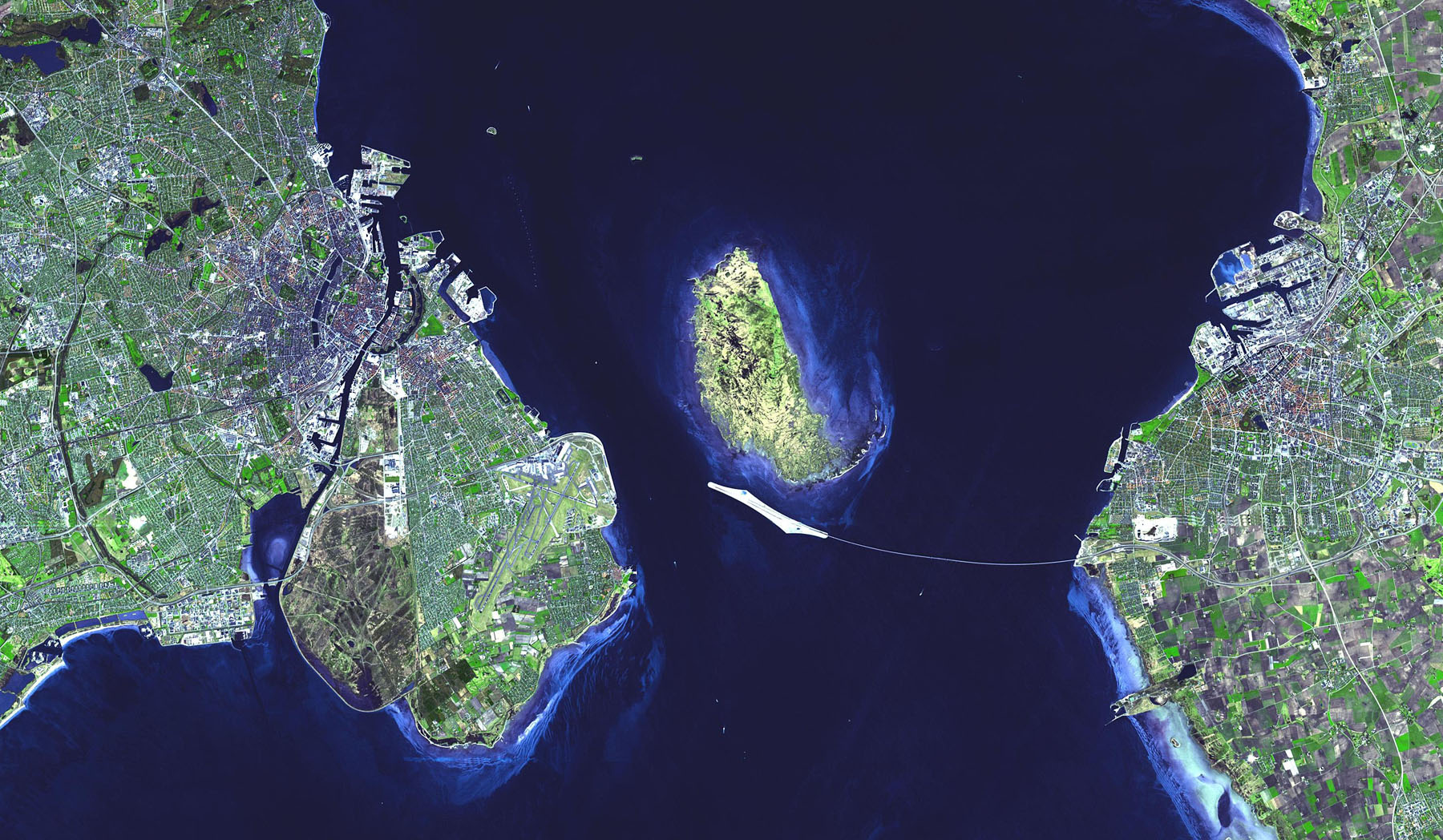 Sitting in a car driving over the Öresund Bridge you will be amazed at its size. There seems to be no end to it, so you have a chance to admire the breathtaking seascapes and enjoy the ride through the tunnel.

The Øresund Bridge: Fares and other useful information

Immediately after the opening of the Eresund Bridge, the crossing was so expensive that it did not become very popular among the locals until a system of discounts was introduced for regular customers. Danish citizens, who bought apartments in Sweden and regularly traveled to the office on the bridge, could count on impressive discounts. This had a positive impact on both countries, as wages are higher in Denmark, and housing is more affordable in Sweden. Many people share life between the two countries and are happy to take advantage of the opportunities the bridge has provided.

For the convenience of customers at the toll station of the bridge-tunnel over the Eresund Strait are lined:

There are signs on the roadway to help you navigate to the right lane.

The toll on the bridge between Copenhagen and Malmö is: 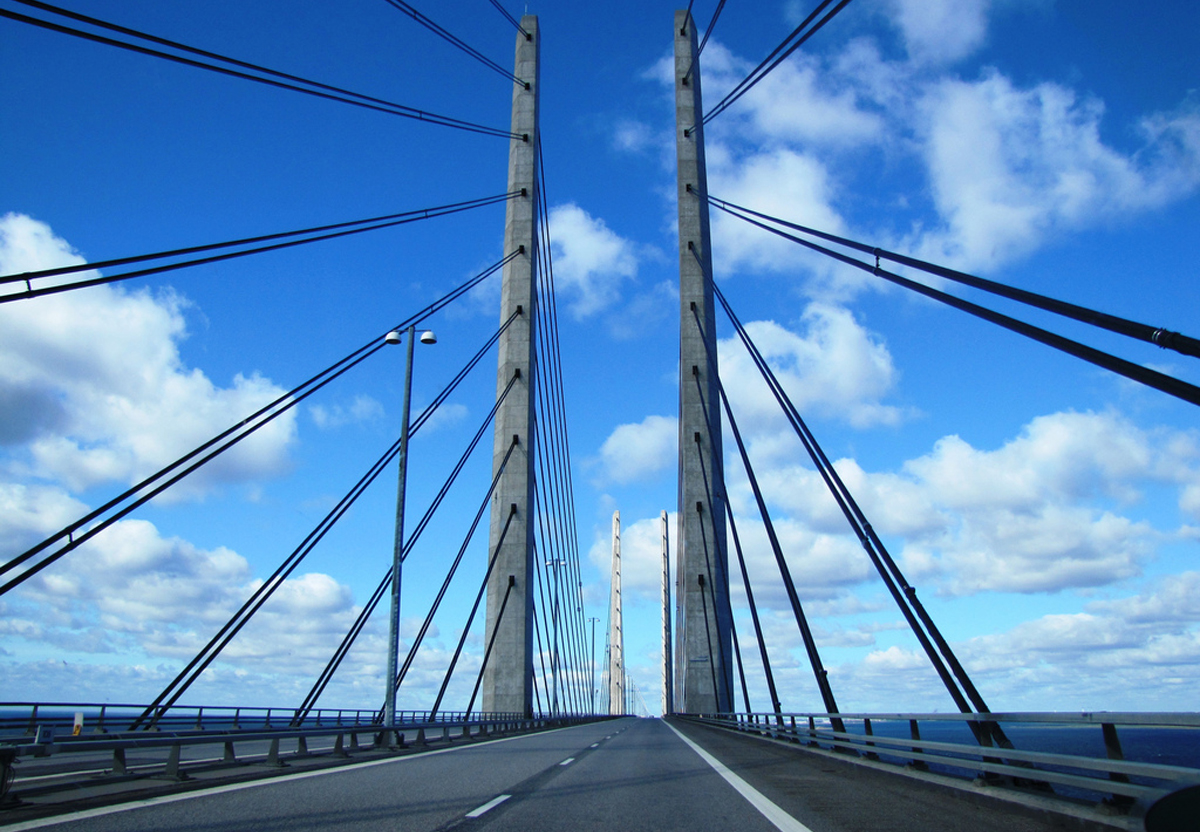 Many people think these figures are excessive, but they are quite comparable to the ferry fare that circulated between the countries before the bridge was commissioned. Plus, when you buy tickets online, you can save up to 6% of what you’ll have to spend at the station. And you can also subscribe to BroPas, which costs €42 per year, and save more than 60% of the original cost of each trip across the bridge.

You can cross the Øresund Bridge and the underwater tunnel in about 50 minutes by car and half an hour by high-speed train. Keep in mind that the train moves on the lower level, which prevents you from admiring the bridge itself.

Video: preparation and driving over the bridge connecting Denmark and Sweden.

Updated: 15 Jan, 2019 You are deeply mistaken if you think that seeing everything…

Updated: 28 Nov, 2019 The Royal Palace in Madrid is the main attraction and…

Updated: 24 Jul, 2019 Do you know what is the most visited tourist attraction in Saxon Switzerland?…