The Spanish town of Aranjuez is located 48 km south of Madrid. This small city with a population of 50 thousand people stands on two rivers: on the one side of the city runs the river Tajo, on the other – carries its waters tributary of the Jarama. In Aranjuez tourists are attracted by the many monuments of architecture in unity with the wealth of nature.

Among the religious, castle and museum buildings stands out the Palacio Real de Aranjuez, which was declared a UNESCO World Heritage Site in 2001. This is one of the most luxurious and popular attractions in the vicinity of Madrid. The palace was built in the 18th century as a residence of the Spanish monarchy for the spring and autumn holidays. 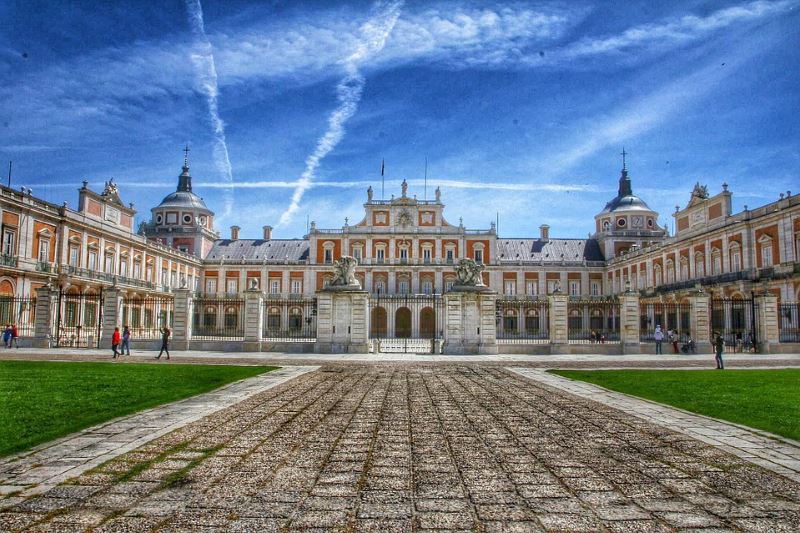 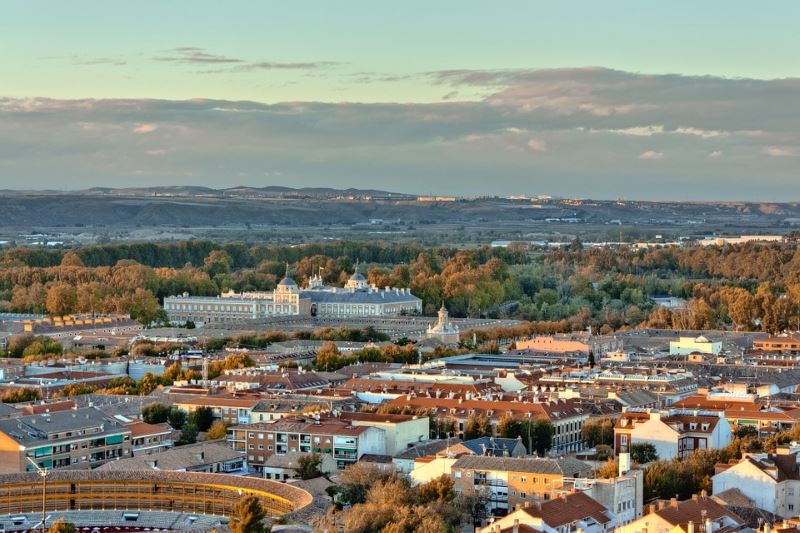 History of the landmark

The appearance of the future palatial landmark was initiated by King Charles V . He chose an area near the Spanish capital for his outdoor recreation. It was Charles’ son, Philip II, who ordered the construction of the residence. He commissioned a palace designed by Juan Boutista de Toledo, the architect who had created the lavish monastery palace of the Escorial. But after taking up his duties in Aranjuez, the designer and urban planner passed away before the work was completed.

The case was taken up by the architect’s pupil, Juan de Herrera. King Philip did not see the finished castle either – the underground chamber, and part of the southern and western facades of the building were rebuilt after his death. And in the XVI century, construction stopped due to the crisis in the country. The last Spanish rulers, the Habsburg dynasty, were also uninterested in the building.

Later, under Philip V, a new north tower was built and the facade work was completed. Further transformation of the castle was hindered by a fire in 1748. The very damaged building was rebuilt during the reign of Ferdinand VI on the basis of architectural suggestions from the 18th century.

During the reign of Charles III the palace was enlarged by two wings that surrounded the inner courtyard. As a result, the royal palace at Aranjuez differed considerably from the original project of the Toledo architect. In the XVIII-XIX centuries the castle inside was decorated with paintings of famous painters, furniture made of expensive wood, tapestries, statues, valuable dishes. 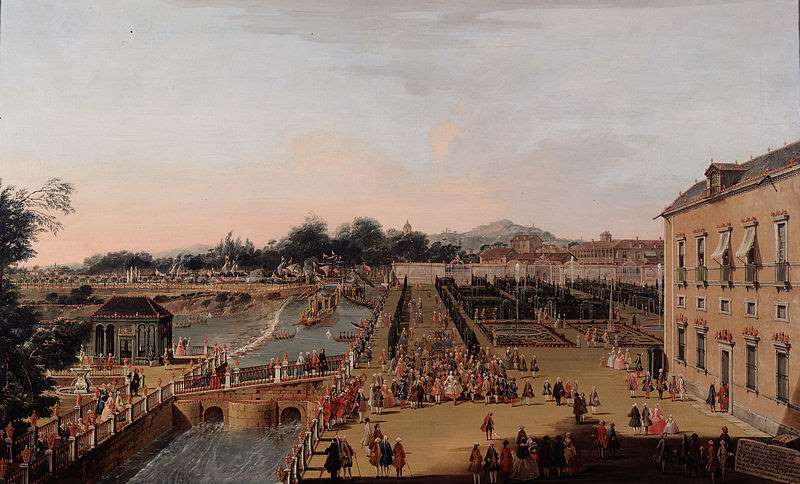 The painting shows King Fernando VI and his wife Queen Barbara Braganza in the gardens of Aranjuez.

Description of the site and what to see

The royal palace in Aranjuez was built as the “Spanish answer” to the French Versailles. Its architecture is based on the Rococo and Baroque styles. The façade of the castle is done in white. The two-story structure includes more than 2,000 offices, but the doors of about 20 rooms are open to visitors.

1. The most impressive in the palace is the Porcelain Room with its walls and enormous chandelier of royal porcelain. The fine Italian porcelain decoration, made in 1765 by an Italian craftsman, gives tourists the impression of finding an ornate Chinese vase inside. The walls and ceiling of the hall amaze with the beauty of coatings in bright ornaments and outlandish figures, branching in unusual lianas, on which monkeys and parrots climb. Interesting are panels with worldly subjects and lots of mirrors – in which the abundant decor becomes even more abundant.

The throne room, with its walls and throne chair covered in red velvet, is located in the north wing of the palace. The crown of the monarch is kept in the room; it is held by a statue of Venus. The vault of the Throne Room is decorated with paintings in the Pompeian style.

3. The Empress’ Chamber is furnished with exquisite furniture ordered in a royal workshop in the 17th century.

4. The rooms of the monarchs are situated in the east wing of the castle. The ceiling of the Empress’ bedchamber is inlaid with frescos by the painter G. Velázquez. The allegorical paintings glorify the triumph of science, beneficence, art, law and absolutism. The king’s chamber is placed on the other side of the dance hall.

5. “The Arabian cabinet. The Arabic room, decorated in the spirit of Oriental luxury, is reminiscent of a room in the Alhambra palace in Granada.

6. The Mirror room and the Chinese painting room are splendid – you can admire the paintings given by the Chinese monarch to Queen Isabella II.

7. On the first floor of the castle there are displays on the life of the rulers and their entourage. There are displays of weapons, insignia and uniforms of emperors and officers of the Guards, as well as portraits and biographies of royalty. 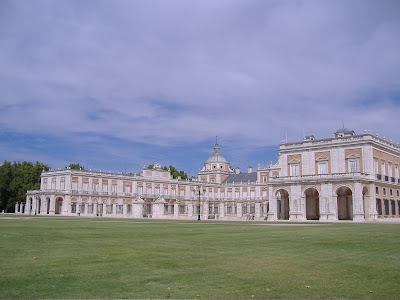 The royal summer residence of Aranjuez, created over several eras for the recreation of the royal family, is located 47 kilometers south of Madrid, between the Tajo and Jarama rivers. References to Aranjuez date back to very ancient times. In 1171, Alfonso VIII decreed that this area be placed under the jurisdiction of the Royal Order of Santiago. The masters of the order built a palace house on the site of the present royal palace. In the second half of the 15th century the city came under the jurisdiction of the Catholic Kings (Isabella I of Castile and Ferdinand II of Aragon). The real history of Aranjuez begins in 1489, when Queen Isabella issued a decree giving the royal family possession of Aranjuez for life. Aranjuez became a place frequented by the kings of Spain. The surroundings of Aranjuez were an excellent hunting ground. They were appreciated by the last emperor of the Holy Roman Empire, Charles V, who stayed in the old building. His son Philip II, who became King of Spain in 1556 and also liked these beautiful places, ordered the construction of the royal palace at Aranjuez. In 1560 Philip proclaimed Aranjuez the Royal Residence. During his time on the throne, the gardens were improved, trees were intensively planted, canals were built and the islands were cleaned up. The royal architect Juan Bautista de Toledo supervised the work and after his death the work was continued by Juan de Herrera, who studied under him. The completed palace bore little resemblance to the original design, but held the same significance for Spain as Versailles did for France. At the beginning of the 18th century, after the War of Succession against the Archduke Charles of Austria – the second claimant to the Spanish throne, freed by the death of the childless Carlos II – the first king of the Bourbon dynasty, Philip V, came to rule. He had been brought up in France and decided to rebuild his two favorite palaces in Spain in the French manner: La Granja de San Ildefonso and Aranjuez. In 1717, by order of Philip V, the architect Pedro Cardo Idrogo designed a new baroque palace, which was built in 1739 on the site of the previous one. But the work did not end there. After the death of Philip V in 1746, his heir, Ferdinand VI, began to pay particular attention to the residence in Aranjuez, unlike his father, who preferred La Granja de San Ildefonso. In addition, Aranjuez became the favorite residence of his wife Barbara Braganza. In the spring of 1748, during the royal couple’s stay in Aranjuez, a fire broke out that destroyed most of the palace. This event accelerated the monarch’s desire to enlarge and improve the royal residence and in 1750 he ordered the royal architect Santiago Bonavia to prepare a project to reconstruct the palace and new annexes to solve the problem of accommodating the court. After Ferdinand VI died childless, his brother Charles III succeeded to the throne, leaving the Kingdom of Naples to the intrigues of his mother Elisabeth Farnese, second wife of Philip V, who at last had the opportunity to see one of her posterity on the Spanish throne. During the reign of Charles III, the wings were completed and the inner courtyard enclosed. Italian architects Giacomo Bonavia and Francesco Sabatini took part in the architectural ensemble of the royal residence in Aranjuez.