The Katskhi Pillar and the Church on the Rock in Georgia

There is an interesting attraction in Georgia – the church on a rock. And the rock is a freestanding cliff, 40 meters above the ground, very similar to a giant pillar. Around the world it is known as the “Pillar of Katskha” or “Katskha’s Pillar”. Taken together, both the rock and the church atop it look amazing, if not implausible.

The Pillar of Katschi is located in northwestern Georgia in the Imereti region. The mountain lies near the village of Katshi, 5 kilometers west of the town of Chiatura. 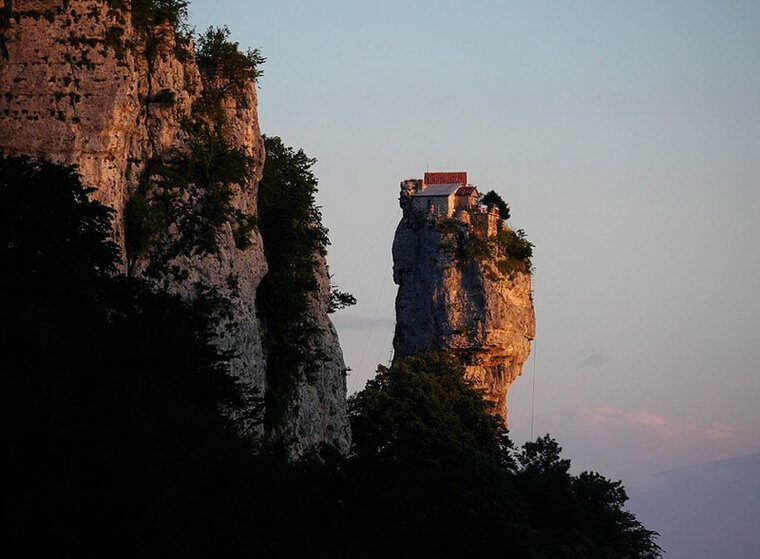 It is sometimes called the Pillar of Life. Perhaps because people actually lived on top of it. Or because in ancient times, this rock was considered a symbol of fertility, and therefore of life. In geological terms, the rock is a monolith, consisting mainly of limestone rocks. Under the influence of natural processes this giant fragment was left in proud solitude. It can be compared to the famous Manpupuner pillars in Russia. The surface area of the Katskha Pillar is about 150 m 2 . 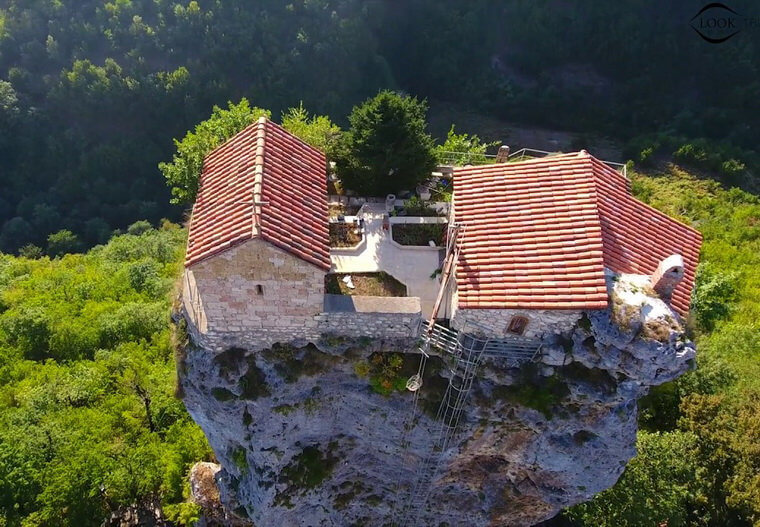 The Church on the Rock

In addition to being a natural landmark itself, you can see a building on top of the Katskha Pillar. It is the church of St. Maxim the Confessor. Locals often refer to this church as the “Fortress of Solitude.” It lies in the southwestern part of the rock and is a very simple structure. The main hall is only 3.5 by 4.5 meters. It is a modern restoration of a ruined medieval church built of stone. It exactly replicates the old building from the 9th or 10th century AD.

Long before the advent of Christianity in Georgia, the Pillar of Katsakhi was a venerated place among the locals. It was associated with the God of fertility. It was believed that it could bring a person closer to God. With the advent of Christianity, a small church was erected on top of the Katskha Pillar. Services continued until the conquest of these territories by the Ottoman Empire, as a result of which the church was abandoned. 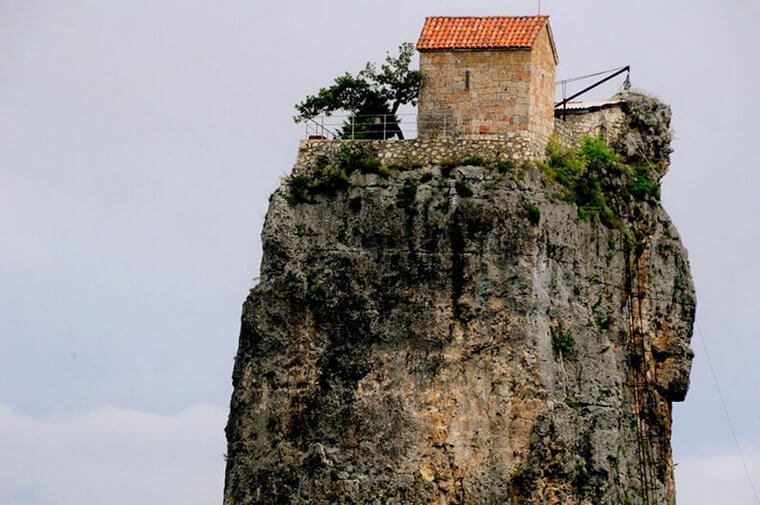 Next to the church is a rectangular burial vault measuring 1 by 2 meters. Archaeologists have even found the remains of three people in it. Also at the top of the rock was found a wine cellar with eight large vessels.

At the base of the Pillar there is an image of a cross, similar to medieval images found elsewhere in the country. There are a number of other buildings, so it could be considered a religious complex, although not large in size. 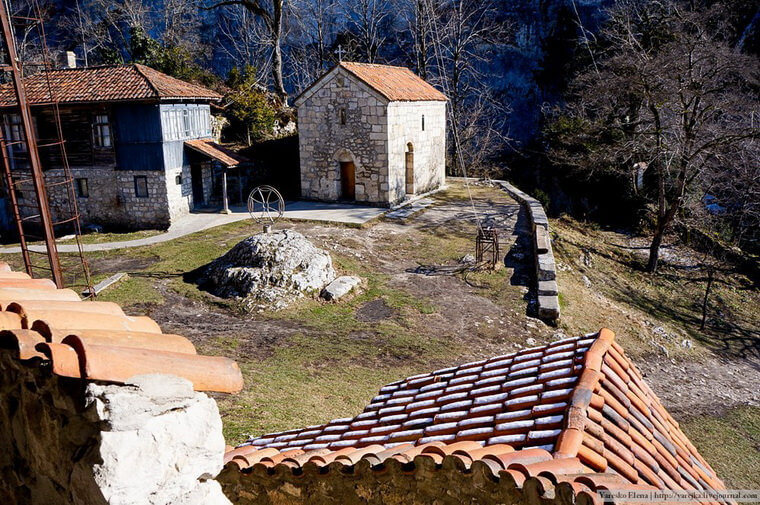 The buildings at the foot of the Katzha Pillar

The top of the Pillar could only be climbed with a suspended ladder, which was installed in 1944 during the first officially registered ascent. By the way, there is no data on how people climbed to the top before that, but it is likely that such a ladder existed.

Theoretically it is possible to get to the church on the rock by jumping with a parachute, but so far no one dared to take such a desperate step. But in the U.S. one extreme climber jumped with a parachute on the Devil’s Tower in Wyoming. But then he could not come down and got stuck on top for 6 days.

The first mentions of the Katskhi Pillar and the church at its summit are found in the records of the Georgian prince Vakhushti Bagrationi. In the 18th century he tried to conquer the rock, but the attempts were unsuccessful. Full-fledged archaeological research was conducted in the period from 1999 to 2009. During these, scientists determined that the ruins found at the top belonged to a medieval hermitage founded here around the 9th-10th century A.D. There were also found inscriptions of the 13th century, which confirmed that the hermitage existed at least before this time.

Architectural expert Vakhtang Tsintsadze speculated in 1946 that the ruins found at the top of the cliff were the remains of two 5th- and 6th-century buildings. But in 2006, it was proved that the buildings belonged to the 9th-10th centuries.

Religious services at the top of the Katsakhi Pillar began to revive in 1995, when the monk Maxim Kavtaradze arrived here from neighboring Chiatura. The parishioners donated money to him for the restoration of the church. Between 2005 and 2009, the building at the top of the cliff was restored with the support of the National Agency for the Preservation of Cultural Heritage of Georgia. 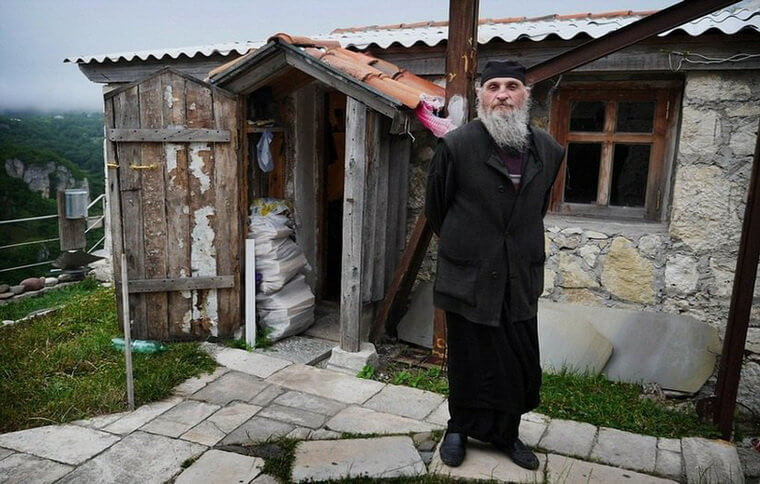 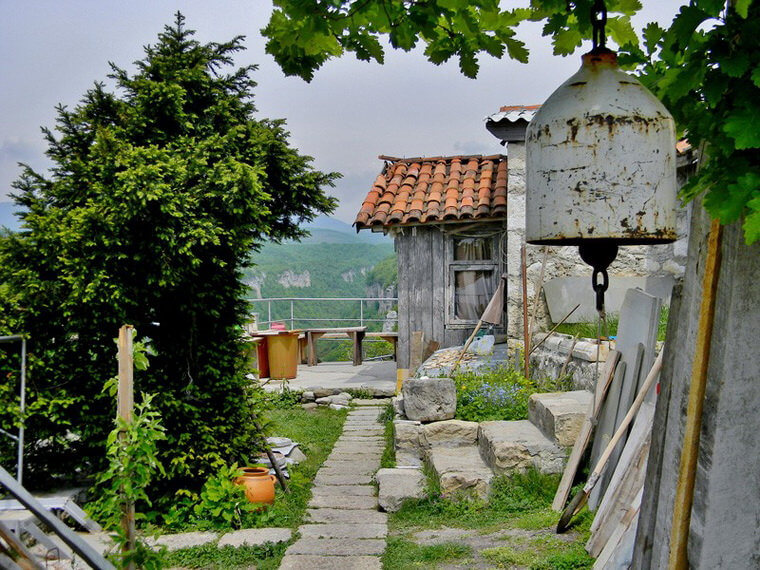 The Katsakhi Pillar in Tourism

The attraction is located away from the main tourist routes, so there are few visitors. No money is taken for the entrance. But it is not possible to climb the Katskhi Pillar. Previously, only men could climb to the top, but now access to the church is closed.

According to travelers, it is theoretically possible to get to the top of the cliff, but you need to get a lot of permits and approvals. As a rule, the few tourists do not do this and prefer to see the church and the rock from its base. 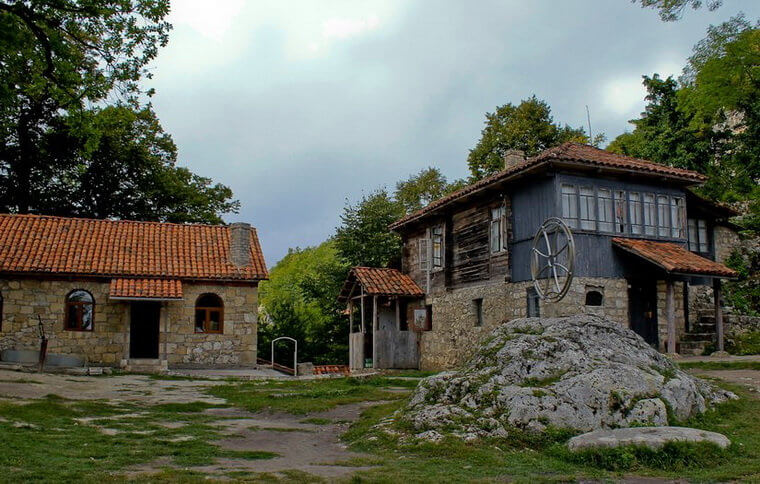 At the foot of the Katzha Pillar

How did a house and church end up on a 40-meter cliff? The Pillar of Solitude in Georgia

This hermit monks’ house leaves everyone who has seen it bewildered. The landmark is located in Georgia in the village of Katskhi. A huge pillar with steep walls, and at a height of 40 meters flat area, where a small church and a small house was built. The most interesting thing is that before the appearance of modern buildings there were buildings dating from the VI-VIII centuries. 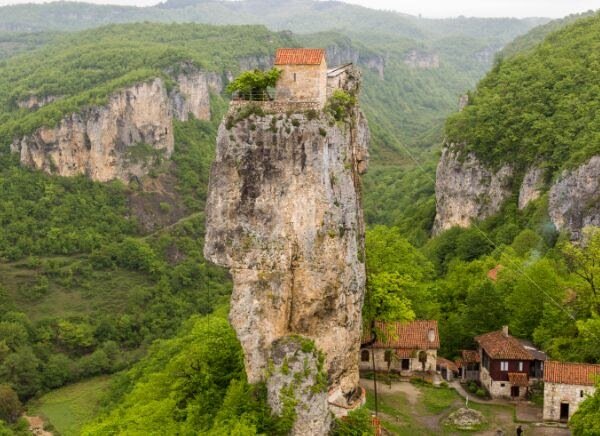 The Pillar of Solitude.

History of the Pillar of Solitude

According to legends in pre-Christian times, this place was considered sacred to pagans. The lime rock pillar was a symbol of fertility. In 1945, archaeologists climbed to its top. It was possible to do it only with the help of climbing equipment. At the top they found the ruins of an ancient structure – the foundation and one wall. There was also a human skull and bones. 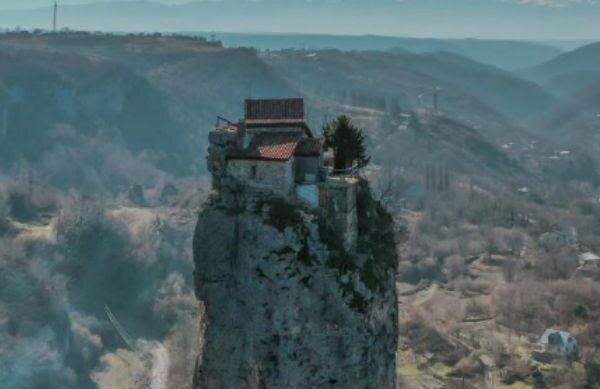 In the photo on the other side of the pillar, you can see that there is a structure just below the top site.

Upon detailed examination, an inscription was found that read, “I am a very great sinner, so I built two houses here, one for God and one for monks.” This construction was dated from the 6th to the 8th century, or, according to another version, the 10th century. The most interesting thing is that the remains of the foundation were found even older.

According to historical data, the monks lived here until the 15th century and regularly held services.

As a result of the raids of the Ottoman Empire, the place was abandoned. But the last inhabitant was an unknown monk who died here in the XVII century. His bones were found by the researchers. 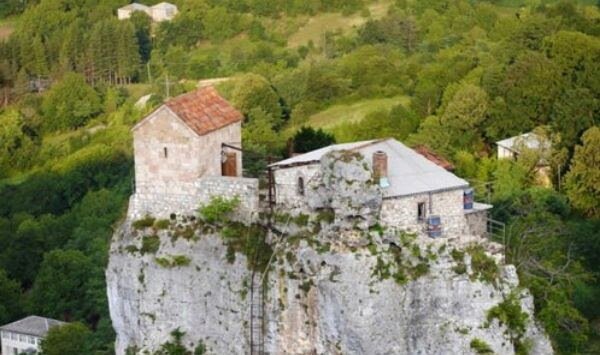 The building above is a church, the second is a house for monks.

After the scientists many climbers, tourists and residents of nearby villages visited Katskha Pillar. It was a place where one could practice rock climbing. But for people of faith, the Pillar of Solitude became a place of pilgrimage.

Restoration of the church on the Katsakhi Pillar

In the 1990s, the monk Maxim the Confessor came here. He lived in the neighboring village of Chiatura and since childhood had dreamed of living in this unusual place. He spent the winter in a small cave at the foot of the pillar. One of his friends in Tbilisi provided the necessary funds to restore the temple at the top.

At first Maxim alone lifted the stones to the top and built the buildings exactly as they had been. After a while he installed a winch to lift tools and building materials. He also built a wooden ladder. 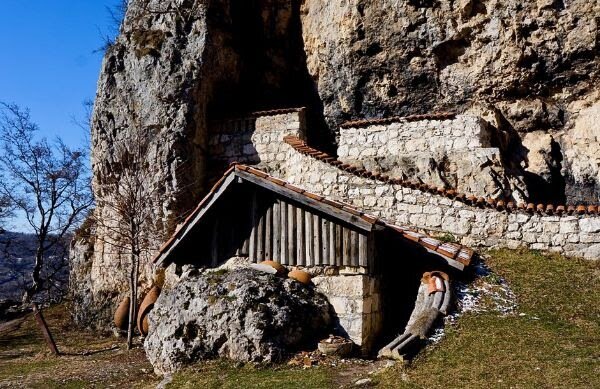 Chapel in the cave at the foot of the pillar. According to local legend, this is where Jesus was born.

Later other clergymen and just local people joined in. At the foot of the pillar they built a church, a chapel, a shop and houses for the monks. At the end, the wooden staircase was replaced by a more reliable metal staircase, which is surrounded by a batten for insurance. And around the perimeter of the site at the top made concrete reinforcements and a metal fence. 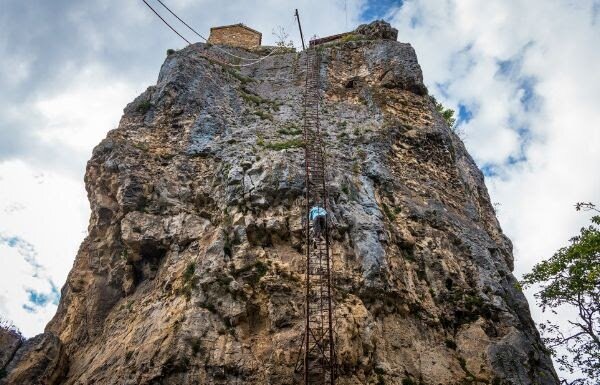 At the top of Katskha there is also the burial of the very unknown monk whose remains were found during the excavations. After the restoration, a stone tombstone with a cross was placed on it.

After the construction was completed, the confessor Maxim lived on the pillar for some time, going down daily to pray in the church at the foot. No one but other clergymen could come up to him, and that only by permission. 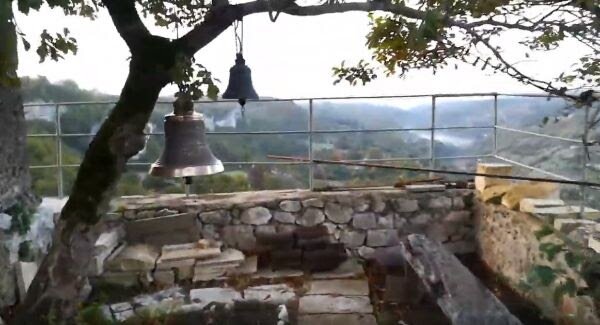 With the help of the bells, the hermit gave signals to the monks below. For example, when lifting provisions with a winch.

Can a tourist visit the Katsakhi Pillar?

Anyone can visit the complex at the foot. For women, a headscarf and a long skirt are required. To climb to the top were allowed only a few and only men. You have to collect a bunch of certificates.

But there are those who do not need permission. One of the tourists came to the pillar of solitude at night, waited in the tent at dawn and climbed to the top while no one saw. Yes, the bottom of the ladder is padlocked, but it’s easy to climb through the trim. Whether someone saw this maneuver or not is unknown. After circling the landmark with his camera, he made his way back down safely. 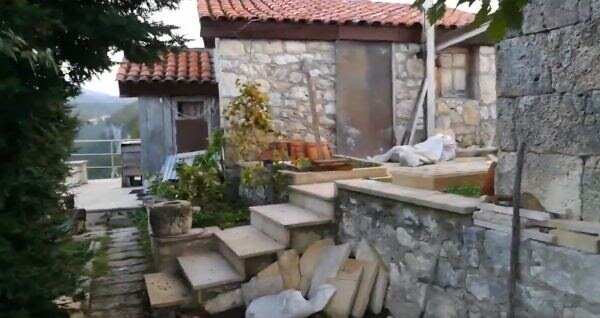 The modest stone buildings at the top.

The view from the other side.

That’s how in those days someone was able to raise stones on a pillar of solitude, and still build something? Confessor Maxim himself admits that even a short stay at the top requires a special inner state. And the guy who brazenly climbed to the top without permission claims that at night in the tent he heard strange voices, sounds, and even felt like he was being pushed and tried to pull his legs. It is said that there are many demons in holy places, for it is more interesting for them to tempt the righteous.