The South Pole of Inaccessibility and Lenin in the snow, looking down on Moscow In the harsh conditions of the Antarctic wilderness, where there is nothing but ice and snow for hundreds of kilometers around, a golden statue of Lenin rises from the drifts. The leader of the proletariat has been staring off in the direction of Moscow for more than half a century, and how he ended up here deserves a separate story. The pole of relative inaccessibility is the point most difficult to reach because of its remoteness from convenient transportation routes. The South Pole of Inaccessibility is perhaps the most inaccessible of all such points due to the very unfavorable weather conditions in Antarctica and the controversial question of where the pole is located. The problem is how to understand the word “coast”: either to report from the coastline along the land-water boundary, or along the boundary between the ocean and the Antarctic ice shelves. In any case, this place is so far away that only a few have reached it. Eighteen men, led by Evgeny Tolstikov, reached the point of inaccessibility on December 14, 1958. Reaching the pole was a matter of principle. And not just to reach, but to set up a research station there. And not just any station – with Lenin on the roof. The men dragged the materials for the construction with them: the room was designed for four people, the hovel was equipped with a weather station and a radio station with a 20-meter antenna. And, of course, a statue made of frost-resistant plastic. Lenin was placed on the roof of the station, so that he could be seen from afar. The explorers brought provisions and fuel for six months, but soon enough they realized that it was simply impossible to live in such a harsh place. The men stayed at the pole for 12 days and headed back home. On the way four explorers were picked up by a plane, while the others continued on their sledges to the shore. The next time they reached the station was six years later, in January 1964. It was the Ninth Soviet Antarctic Expedition. They left the station stocked with provisions, even with supplies of cigarettes and matches. It was in this condition that the Americans, who reached the Pole the following year, found the place. As a joke, they turned Lenin on the roof the other way, so that the leader would look not at Moscow, but at Washington. The Soviet explorers turned Lenin back in 1967, and the station remained deserted for forty long years. Ten years ago, in 2007, a British team set off across the Antarctic without any mechanical aid (partly on foot, partly with the help of kites). However, they did not manage to visit the station: over forty years, the building was completely covered with snow – no house edges or roof can be seen, so only the golden Lenin remains visible, still looking at Moscow. Lenin’s statue is not the only thing interesting about Antarctica: in our article “20 Antarctic Facts” you can find even more interesting information about the “winter” continent of our planet.

Finding the pole of inaccessibility on the coldest and whitest continent on the planet is not difficult. In the middle of the endless icy Antarctic wilderness you will be greeted by a monument to Lenin. Surprised? But you really are. 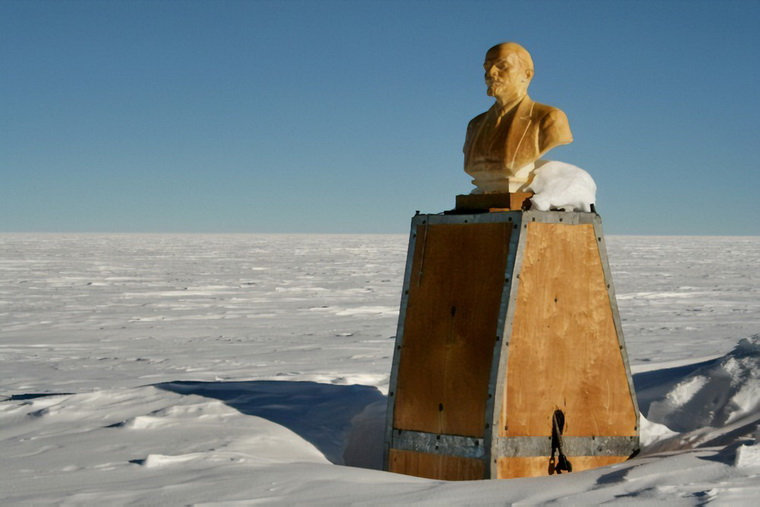 Lenin Monument in Antarctica of course is small and made of plastic, but it is still the most southern monument to the leader on Earth. It was left here by the 3rd Soviet Antarctic Expedition in 1958. Today, the monument is all that remains of the Soviet research station. The station itself has long been buried under a thick blanket of snow; only the monument to Lenin, once installed on its roof, is visible.

The concept of “inaccessibility pole”

Generally, geographers use the concept of Pole of Relative Inaccessibility. It is usually considered a point that is extremely difficult to reach because of its remoteness from any known routes. Often it is called the most distant point from the shoreline. This refers to both land and water surface of the planet. Speaking of water. Or rather about the ocean. As you know, it covers most of the Earth. And of course it has its own “pole of inaccessibility”. It’s called Point Nemo (or cemetery of spaceships).

Pole of Inaccessibility of Antarctica.

If you think that the South Pole is the very center and pole of inaccessibility of Antarctica, it is not. The continent’s furthest point is located 878 km from the geographic South Pole. 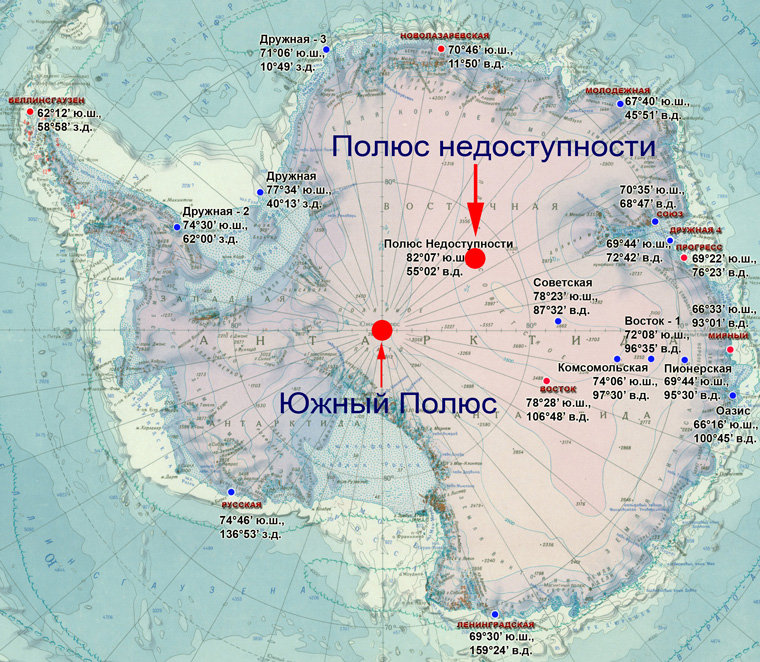 South Pole and pole of inaccessibility in Antarctica

Scientists are still arguing about the exact location of the South Pole of Inaccessibility, as there are differences in distance measurement techniques. In this case, it is not quite clear how to determine the “coast” – to take as the boundary the actual line of separation of water and the continent or the boundary of water and ice shelves, which periodically changes. The geographic coordinates of this point vary, but the South Pole of Inaccessibility is now firmly associated with the Soviet Arctic station, which is also named.

History of the station

While scientists were arguing, Russian polar explorers located this point and built a research station there. Soviet researchers arrived at this remote place on December 14, 1958. Reaching the South Pole of inaccessibility was the main goal of this expedition. It is noteworthy that it is much more difficult to get here than to the geographic South Pole.

The team of 18 people arrived at the Pole of Inaccessibility by sledge-caterpillar method and erected a small house of 24m2 which could accommodate 4 people. During the construction of the station, a bust of Lenin was placed at its highest point. 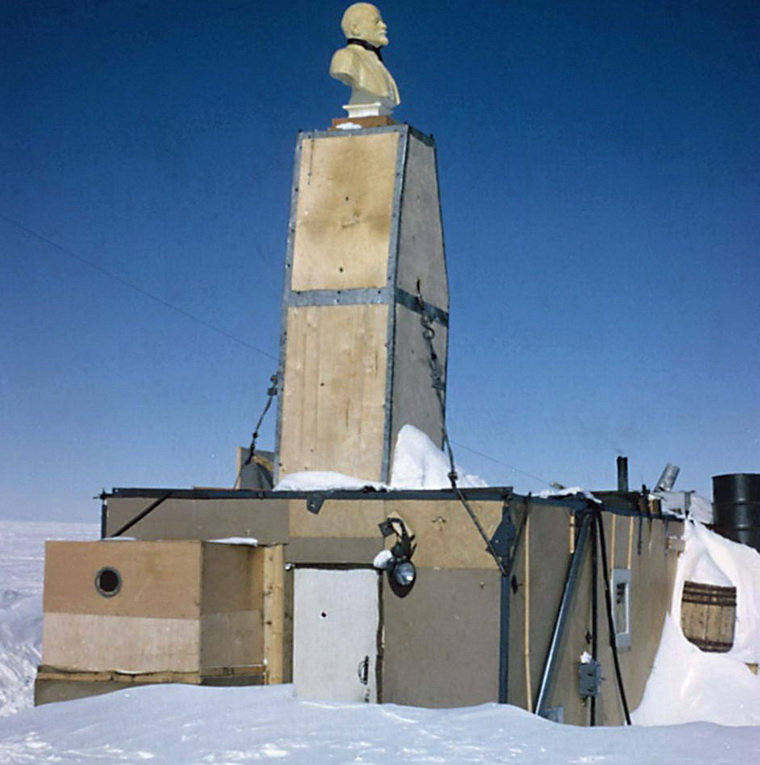 A monument to Lenin at the Soviet polar station in Antarctica

For scientific research was mounted two radio towers, power and radio station. Even the runway was prepared. Three days later the plane Li-2 landed on it. It brought the necessary cargo and took back some polar explorers.

The station was built at an altitude of 3,718 meters above the ocean. The ice in this place is 2980 meters thick. The average temperature in the vicinity of the station is kept at -57.2 degrees Celsius.

According to some reports, the station was supposed to work for six months, but on 26 December it was mothballed and abandoned. The polar explorers preliminarily left here their supplies of food and other useful things for subsequent expeditions and left for the Mirny station, which they reached by January 18, 1959. 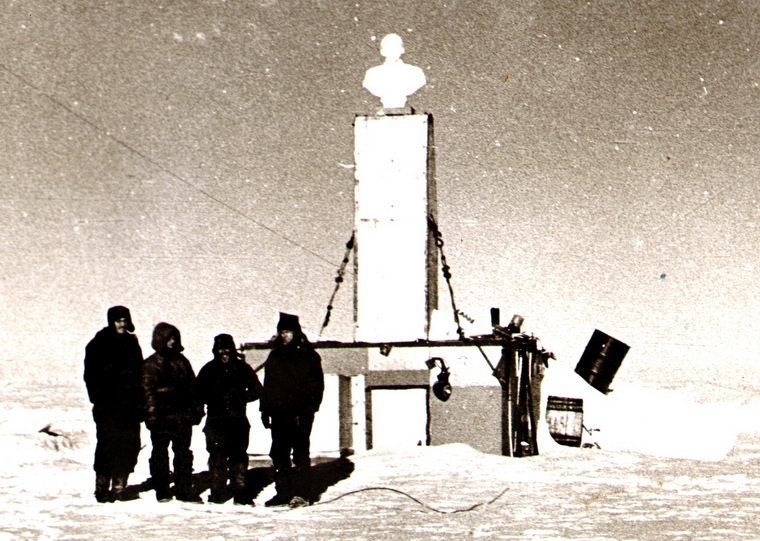 Old photo of the station at the inaccessibility pole in Antarctica

There is a version that the installation of the station here is one of the “battles” between America and the Soviet Union during the Cold War. Two years before the U.S. set up the Amundsen-Scott station right at the South Pole, and the Russians decided that they would respond to this challenge by being the first to conquer the South Pole of Inaccessibility (actually the most remote point in Antarctica) and build a station there.

Buried under the snow, the station and the bust of the leader with a plaque dedicated to the conquest of the Pole of Inaccessibility by the Russian polar explorers are now a historical monument. 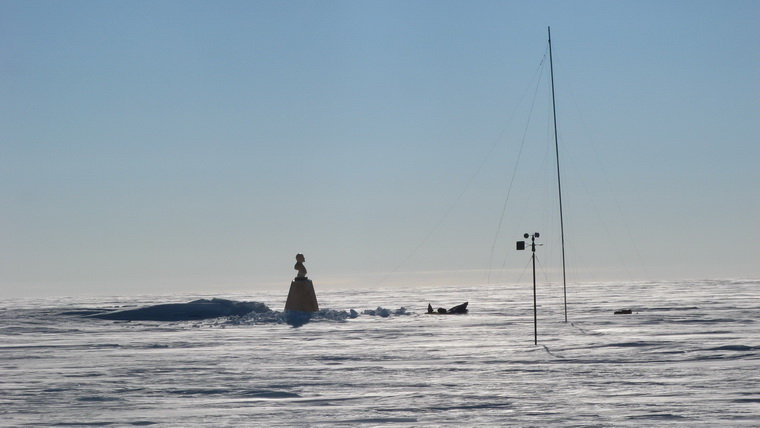 A kite is a controlled towing kite that looks like a rectangular parachute. Sometimes, with the help of such kites, people ride on water or on snowy expanses

Antarktida 0
The South Pole of Inaccessibility and Lenin in the snow, looking down on Moscow

Antarktida 0
Nemo’s Point. Spaceship graveyard Nemo’s Point is one of the most remote places on

North America 0
Lamanai is the ruins of the most enduring Mayan city. Belize In the northern

News 0
Gourmet with Sandra Dimitrovich. 100 Best Restaurants in the World The well-known and respected