Vienna’s Ferris Wheel and the Prater

The Prater Park, one of the oldest and most famous parks in Vienna, offers visitors rides to suit all tastes, from the old Ferris wheel to high speed flights.

Get an idea of what modern Vienna looks like with a single ride on the famous Ferris wheel. It is located in the picturesque Prater amusement park at the southern end of Leopoldstadt, an area immediately adjacent to the city center.

The Wiener Wagon is the oldest Ferris wheel of its kind in the world. It has been open to visitors for over 100 years. Project “Ferris wheel” was designed by British engineer Walter Bassett, and its launch was timed to celebrate the anniversary of the Austrian monarch Franz Joseph I.

A symbol of Vienna – the Ferris wheel

The Ferris wheel in Vienna is 64.75 meters high and travels at a speed of 0.75 meters per second. What sets it apart from other rides of this kind is the resemblance of its red cabins to luxury train compartments. Each of them is closed on four sides, so the probability of an accident is minimized. Beautiful curtains adorn the windows of the booths, and inside there are tables covered with tablecloths and served with dishes. Therefore, residents and visitors of the city can combine business with pleasure, enjoying the city scenery and eating at the same time.

The wheel goes a full circle in 10 minutes. There are only 15 carriages, and all numbers are strictly even. It’s a kind of tribute to popular superstitions: thus you can avoid the 13th car. Half of the “air coupe” refers to the premium class and is designed for romantic dates or banquets. Such cabins are decorated with carpets and antique crystal.

One hour in a luxury carriage can be reserved for 260 EUR. Couples in love, dreaming of an unforgettable dinner in the heights surrounded by the evening lights of the city, often plan a 3-hour trip on the Ferris wheel. It costs 400 EUR, the price includes a bottle of champagne and author’s jewelry from Swarovski.

There is a museum devoted to the history of the wheel. Here you can see moving models of the ride and the exact copies of the cabins from the end of the 19th and beginning of the 20th centuries.

Working hours of the Ferris wheel in Vienna:

From January 9 to 20 the attraction is closed for maintenance. Price of usual admission ticket is 9 EUR for adults and 3 EUR for children (kids up to 3 years old are free of charge).

If you want to take a break from exploring the historic monuments and museums of the Austrian capital, the Prater can offer you a wide range of leisure activities. Visitors to Vienna are often drawn to the following attractions:

It is suitable for those who are afraid of skydiving, but crave a thrill. The main component of WIND-O-BONA is an aero tub for skydiving, which wind speed reaches 300 km/h. This allows to imitate a free flight from a height of 4000 meters. Visitors from 8 years old are allowed on the ride and the ticket price is 49 EUR.

It is designed for the youngest visitors of the Prater. The “Iceberg” gives you the opportunity to feel like a real arctic or Antarctic explorer through an interactive journey into the world of polar bears, walrus, seals, penguins and other inhabitants of the ice spaces.

During the summertime it is especially popular, allowing you to have fun on the numerous water slides and forget about the exhausting heat.

READ
Lodi Gardens in Delhi, How to get there and description

This name stands for a gigantic chain coaster that is around 120m high. The speed of the whirlwind is about 60 km/h. This is a unique chance to see the sights of Vienna from a bird’s eye view.

Dizzying drops into the abyss and soaring to unimaginable heights give the guests of the ride an unforgettable experience.

One of the most unique attractions in the Prater is the Cave Hotel Psycho. Fans of thrillers and horror movies will not be disappointed by the most original plots of the classics of the genre. Here even people with strong nerves are waiting for a real adrenaline rush.

They are designed for fans of extreme sports and allow you to feel like a real pilot of a high-speed aircraft or even an experienced astronaut.

Prater Park for children – slides, trampolines and small merry-go-rounds. Adults and older children can take a ride on the driving range or go-karting, play miniature golf, test their marksmanship at the shooting gallery, or head to the arcade. Rides such as the flower wheel, the “magic carpet” or the underground railroad look unusual. Fans of “Alice in Wonderland” with its unusual journeys will love the large maze that ends in a laughing room.

The Prater also has its own museum whose collection is dedicated to the history of the amusement park, a planetarium, and a small railroad. You can grab a bite to eat right next to the rides at the Schweizerhaus beer restaurant. There are traditional Austrian dishes: different goulash, schnitzels and pork ham Eisbein, cooked by a special recipe with the addition of sauerkraut. A huge choice of local beers is the restaurant’s special pride. The prices for a mug of beer are about 5 EUR.

Park Prater is available for visits every day and round the clock from January to December. Entrance to the area is absolutely free and tickets to attractions range from 1.5 EUR to 5 EUR. Most of them in good weather works from 10:00 to late night (1:00).

You can get to the park by subway line U1 or U2, getting off at the same station. Take the streetcar lines 0 and 5 (Praterstern stop) or the electric trains S15, S7, S3, S2 and S1 (Wien Nord stop).

A visit to the Prater is guaranteed to be a wonderful experience in Vienna.

The Prater in Vienna

The Prater is Vienna’s amusement park. The oldest and most famous attraction is the Ferris wheel. The park offers more than 250 rides for fans of fast-paced entertainment. 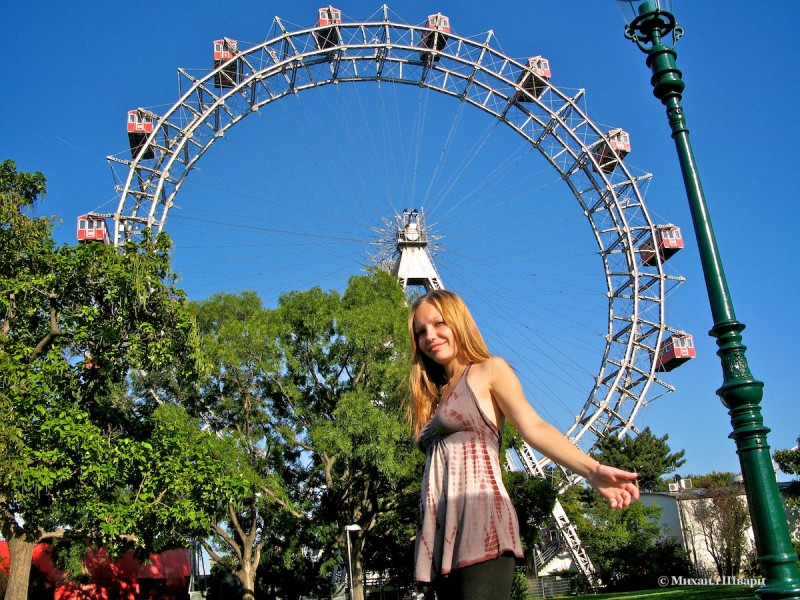 Lena and the old Ferris wheel

Prater is one of the attractions of Vienna, located between the Danube and the Danube Canal, which many tourists dream of visiting. Located in the heart of the Austrian capital, this green oasis has been attracting not only Viennese but also visitors for centuries with its well-appointed recreation areas, fairgrounds, and amusement park.

History of the park

The history of the Prater began in 1162, when the park area was donated by Emperor Frederick I to a noble family with the family name De Prato. For a long time the park land belonged to private individuals and was used for hunting.

Only at the end of the XVIII century Emperor Joseph II made the Prater a public place and allowed to beautify it for public recreation and entertainment. Very quickly many cafes appeared in the park, but hunting continued here until 1920. By 2008, access to the park had become even more convenient with three subway stations in the Prater. However, the area of the park was noticeably smaller due to the recently built stadium, hippodrome, and highway. 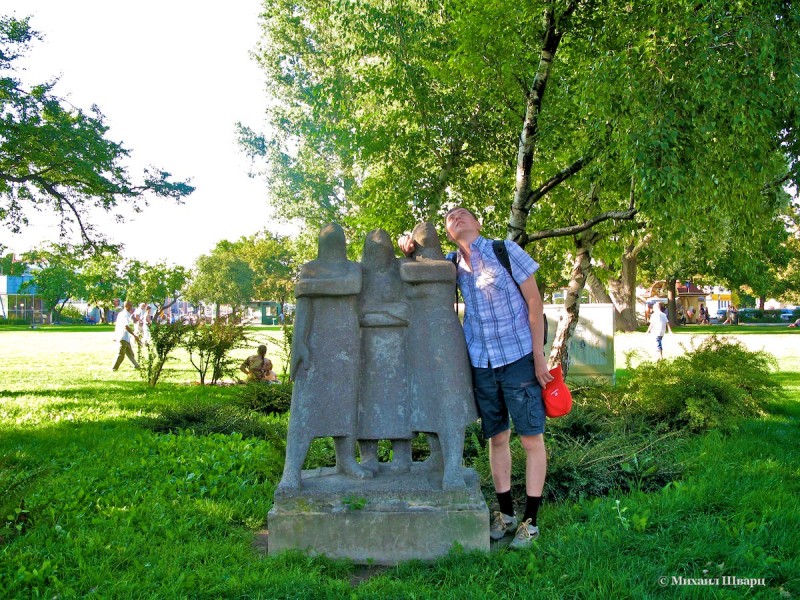 The area of the park Prater is more than 6 km ². It is a paradise for festivals and walks. The park offers a variety of sporting activities such as jogging, yoga and pilates. This is one of the favorite places of citizens. You can ride a bike or roller skate here, wander through the shady alleys, have a picnic or lie on the grass during your lunch break with a book. In addition to the green Prater, the park is famous for its numerous attractions. 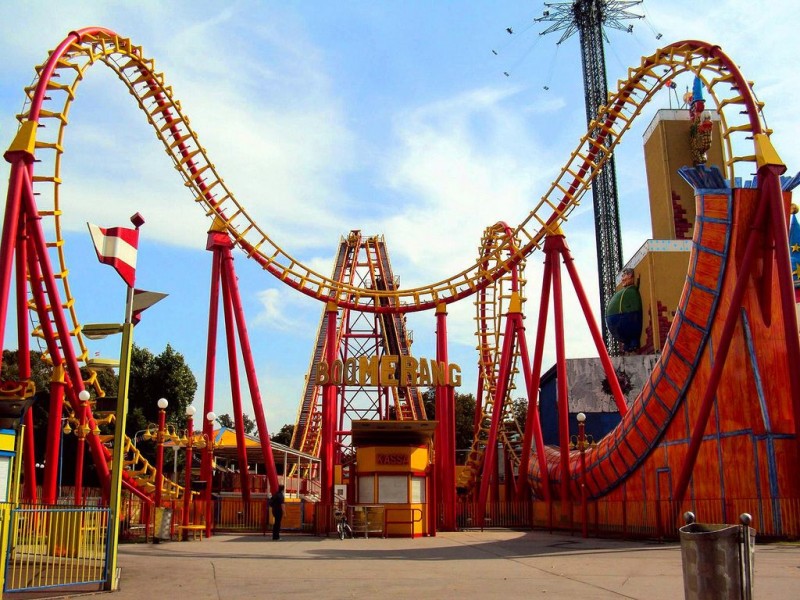 The Prater amusement park is considered the oldest in Europe, and already in the XVII century the first rides started to appear there. Nowadays the Prater is a modern amusement world. It offers over 250 attractions. One of them is the biggest chain rides in the world, the Prater Turm, which is 117 m high and travels at 60 km/h. For only 5 euros! Madame Tussauds, where visitors meet Empress Elisabeth, Arnold Schwarzenegger, Gustav Klimt, Falco and many other world celebrities. 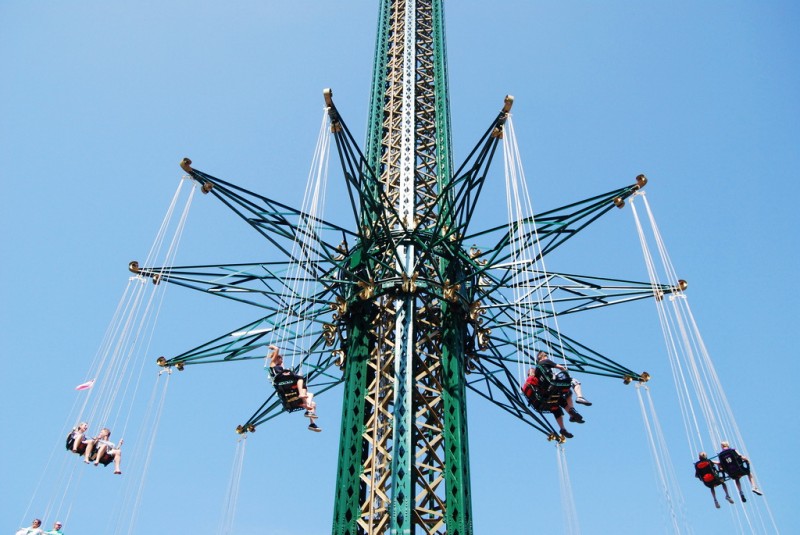 The Bungee Jump, Turbo Boost, Space Shot extreme and Ejection Seat thrill children with their extreme speed. Children are offered an interactive ride to the penguins and polar bears “Iceberg”. A wild octopus catapults its “guests” from a height of 18 meters. And the “Black Mamba” whirls its guests in the air at a speed of 80 km/h. Your blood runs cold with horror when you enter the Zombie Cave. “Darkride Insider” – an enclosed roller coaster guarantees an adrenaline rush. Aqua Gaudi, a water attraction, will give you a nice chill in the heat.

You can also have fun on the Prater: Go-carts, driving rinks, a flying carpet, trampolines, a labyrinth, a laughing room, a train track in a cave, miniature golf, an arcade, a flower wheel, slides, swings, shooting galleries. 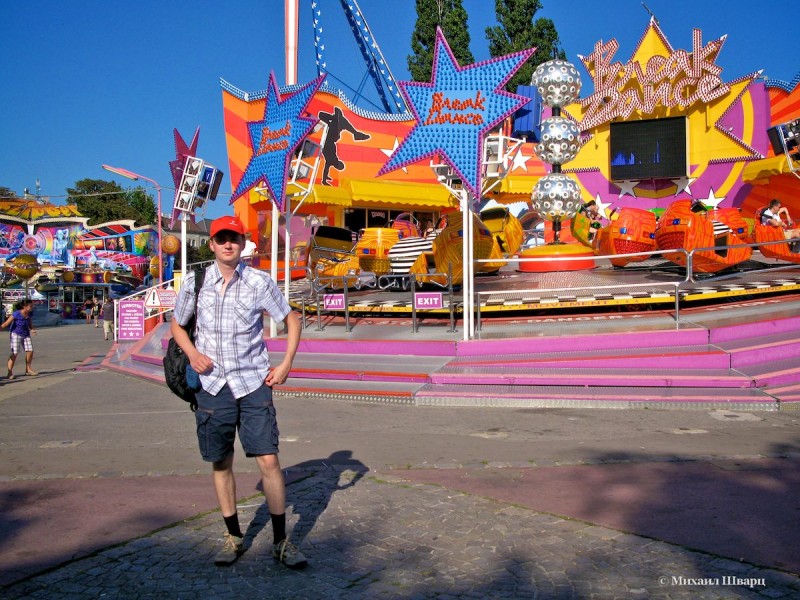 The miniature railroad train takes you around the park. Learn about the past in the Prater Museum and gaze at the stars in the planetarium. 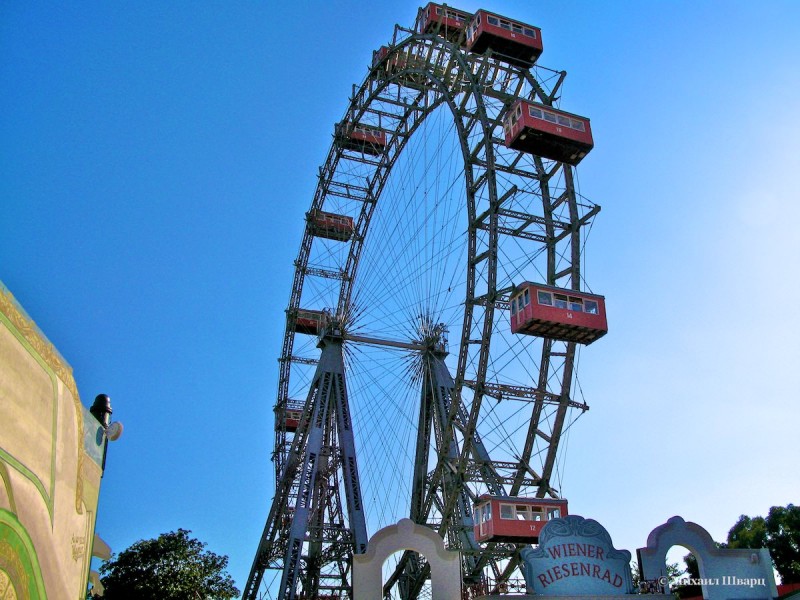 The Ferris wheel deserves special attention (there are two on the territory of the park – the new and the old one). The old Ferris wheel (Riesenrad) is especially proud of the townspeople, because it is the oldest in the world. It was built in 1897 by the Englishman Walter Bassett and has a height of 64.75 meters. It became a symbol of Vienna. The 15 red cabins on the wheel resemble small cars, six of which are used to celebrate special occasions. 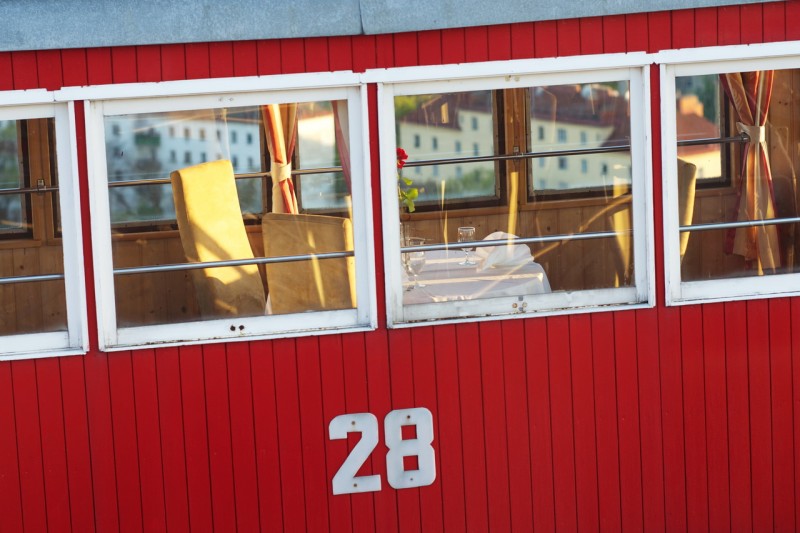 The wheeled booths move slowly, a full turn takes 10 minutes. At slower speeds one can enjoy a panorama of the Austrian capital – especially at night when the city lights are on.

Downstairs is the Riesenrad History Museum with historic cabins and moving layouts.

On average the price of tickets for rides € 3-5. At the box offices of the Prater a special card is sold – the Prater Card, which allows you to pay the price of tickets without cash and still get 10% discount on all attractions. You buy the card itself for €2, the so-called Kaptenpfand, and put money on it, minimum €10, maximum €500, with which you pay for entertainment and attractions. Every attraction has to be paid for separately! 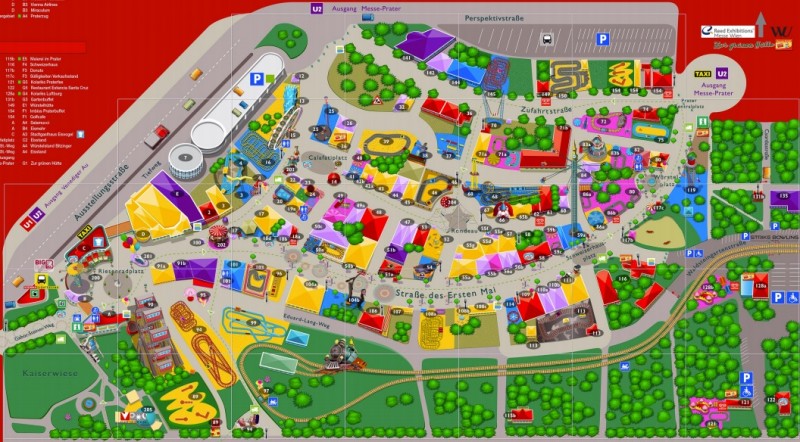