On the Utrecht hills near the village of Austerlitz stands a pyramid of sand and turf as a reminder of the French period in Dutch history.

1804. Napoleon’s army conquered most of Europe. The Netherlands was occupied in 1795 and named the “Batavian Republic.” The French army set up its camp in the peat bogs near Zeist, near Utrecht. The garrison was commanded by General Auguste Frederic Louis Visses de Marmont, a proud and ambitious man. The French soldiers were engaged in intensive training to prepare for the invasion of England.

However, doing monotonous and routine work sooner or later becomes unbearable and to keep the soldiers from getting bored, Marmont ordered them to build a monument.

He served in Napoleon’s army during the Egyptian campaign and was fascinated by the pyramids of Giza, which amazed him by their victory over the inexorable time.

But if the ancient Egyptians needed more than 20 years to build one pyramid, the French easily managed it in a month.

On September 10, 1804, General Marmont himself took part in the laying of the pyramid, having thrown with a spade the first handful of earth into its base at the very top of Utrecht’s hills. Then the soldiers, who carried the earth in sacks, gradually poured the mountain. Then the mountain was covered with sod and heather and began to form steps.

Even the higher officers of the garrison were not exempt from this work.

On October 10, 1804, the pyramid was ready and a 13-meter wooden obelisk was erected on its summit, symbolizing the ancient constructions that the Egyptian pharaohs erected in honor of their victories.

At the base of the pyramid Marmont placed memorial stones glorifying the brilliant victories of Napoleon, and then the pyramid itself, which was named Marmontberg, was dedicated to the French emperor.

The general, inspired by the results of his work, then had even more grandiose plans – he wanted to clad the earth pyramid with brick, and replace the wooden obelisk with a stone one, so that his creation would stand for centuries, like its Egyptian predecessors. However, these plans were not destined to come true – in 1805 Napoleon sent Marmont’s troops to Germany. The emperor would never get to see the creation dedicated to him.

A year later, in 1806, Napoleon’s cousin Louis, who was also the new king of the Netherlands, decided to name the pyramid after Austerlitz, the town near which Bonaparte achieved a brilliant victory over the allied Russian-Austrian armies.

The neighboring village was also named Austerlitz, and still bears that resounding name.

After the defeat of Bonaparte and the inglorious end of his empire, the “eternal” pyramid seemed to face the same unenviable fate – winds, rain and erosion caused it to subside, and the obelisk was demolished in 1808.

The memorial stones were destroyed by locals after the Russian army inflicted a crushing defeat on the French Emperor in 1812 and began, with the Allies, the campaign to Paris that ended the French Empire. A few decades later, the pyramid of Austerlitz could be mistaken for a shapeless mountain of earth.

Attempts to restore the local landmark appeared in the XIX century, however, ended in failure. Nevertheless, a stone obelisk, which can still be seen today, was installed on top of the pyramid.

Photographs from the middle of the 20th century show the obelisk towering above the trees that had grown into the pyramid of General Marmont over more than a century.

In 2000, the Dutch government announced that the pyramid would be restored by 2004, but heavy rainstorms cancelled those plans.

A full restoration began only in 2007 and its results were not long in coming. A stairway was built, the vegetation on the pyramid was cleaned up, a restaurant, a small amusement park and playground were opened. Visitors are charged a small fee to visit the monument (2.5 euros), which goes to the fund for the restoration of the landmark.

The Austerlitz Pyramid can be reached by public transport either from Utrecht or Amersfoort, the distance does not exceed 15 kilometers. A special treat is to take a rental car or a bicycle.

The Cure for Boredom, or How Napoleon’s Army Almost Built an Egyptian Pyramid 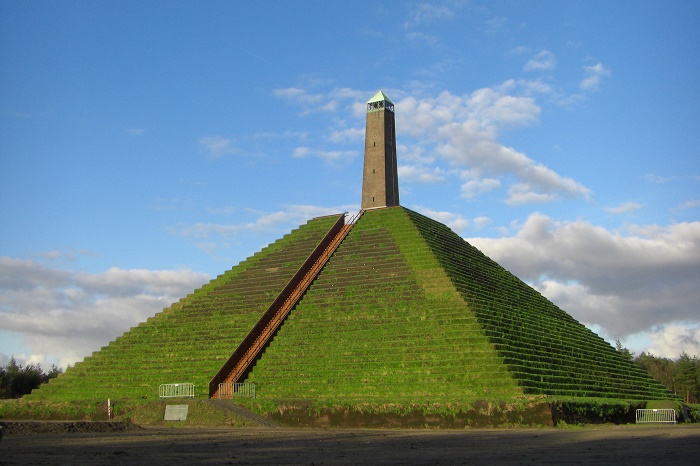 Near a Dutch village on one of the highest points of the Utrecht Hills is a unique structure, which clearly resembles the shape of the world-famous Egyptian pyramids. As it turns out, it was the brigadier general of Napoleon’s army, Auguste de Marmont, who ordered its construction. And why he needed it and what sacral meaning such an unexpected for the European country object has – further in our material. 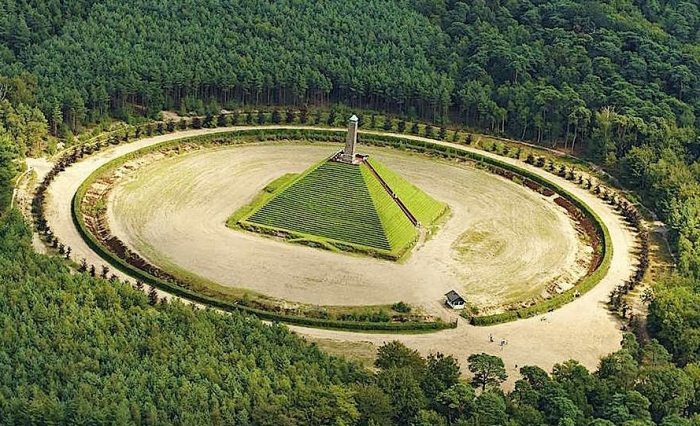 Austerlitz pyramid – the memory of the resplendent victory of Napoleon, although it was built for very different reasons (Utrecht, Netherlands). | photo: dag.com.ua.

Not only Egypt can boast of own pyramid, but also one small village in municipality of Woodenberg (the Netherlands). True, it is not a grandiose monument of architecture, nevertheless the history of its appearance deserves attention of the descendants. 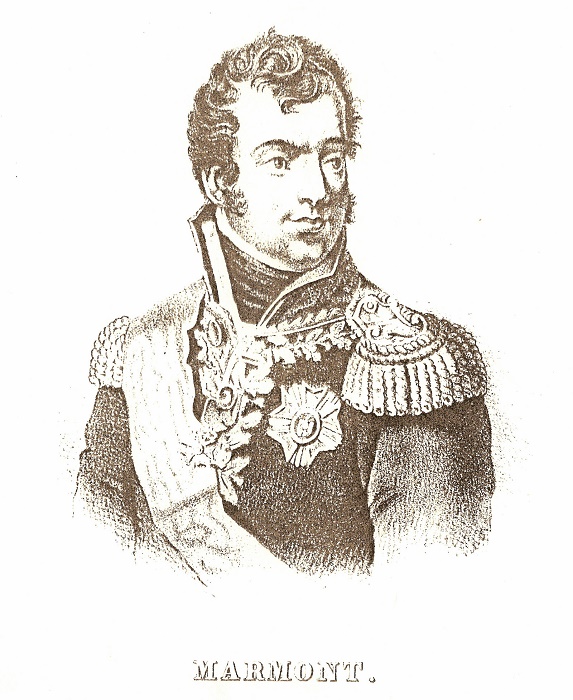 General Auguste de Marmont of the French army – the mastermind who gave the order to build the pyramid of Mont Marmont (Original from the collection of the Flechte Museum. | Photo: canonvannederland.nl.

Interesting fact: And it all started with the arrival of the French Brigadier General Auguste Frederic Louis Vieux de Marmont in these parts, who ordered an army camp (le Camp d’Utrecht) in what was then the Batavian Republic. There, for several months, he consolidated the approaching battalions into a large army capable of confronting the British and the coalition, and the officers actively trained the recruits, turning new recruits and seasoned soldiers into well-trained warriors. In the fall of 1804, when the drill was bearing fruit and the general was quite satisfied with the training of the soldiers, who had become rather bored in the countryside, Auguste de Marmont decided to realize his dream of building a pyramid. Yes, the Great Pyramid that he had been fascinated by at Giza when he took an active part in Napoleon’s military campaign in Egypt in 1798. 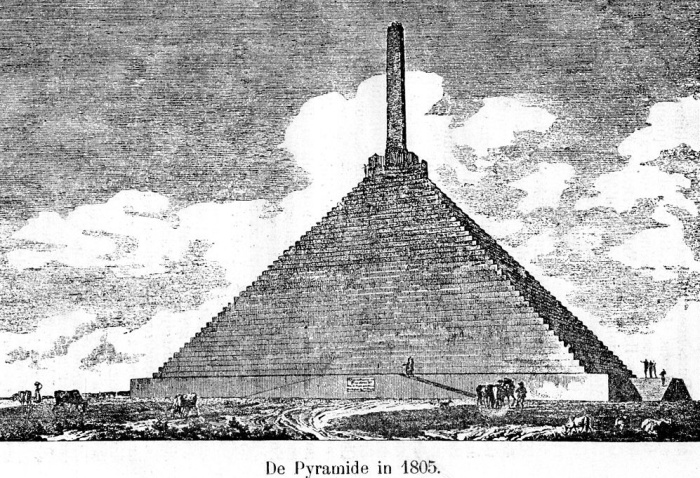 The highest point of the Utrecht hills was chosen for the construction of the grandiose structure, where the work began to boil. According to the Novate.ru editorial office, the brigadier general himself threw a handful of earth during the laying of the pyramid. It is also worth noting that for the soldiers such a pastime was not the duty of following a “wild” order, but a fascinating pastime in which both the officers and the military engineers who made the calculations got involved. 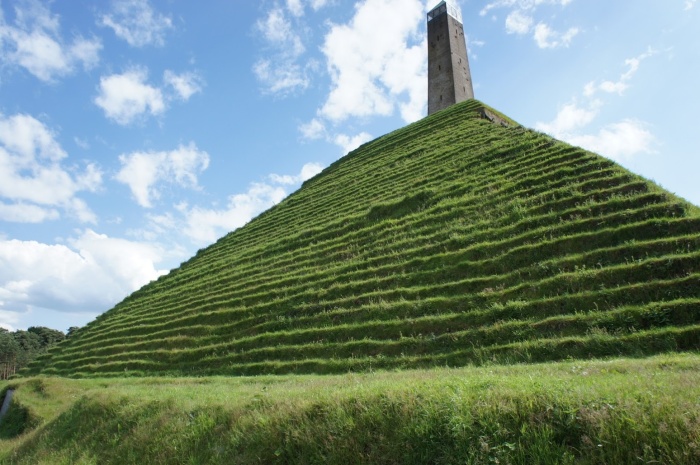 The European pyramid looks especially delightful in the spring and summer, when the stepped slopes are covered with green grass and flowers (Pyramid of Austerlitz, Netherlands).| Photo: barneveldsekrant.nl.

Since no one was going to carve blocks of granite, only earth, clay, heather and turf were used, the construction progressed quickly. Literally for 27 days the 36 meters pyramid with stepped surface rose above the hill. For greater grandeur a 13-meter wooden obelisk was erected on the top. The entire composition was called Mont Marmont or Marmontberg after the building’s inspirer. 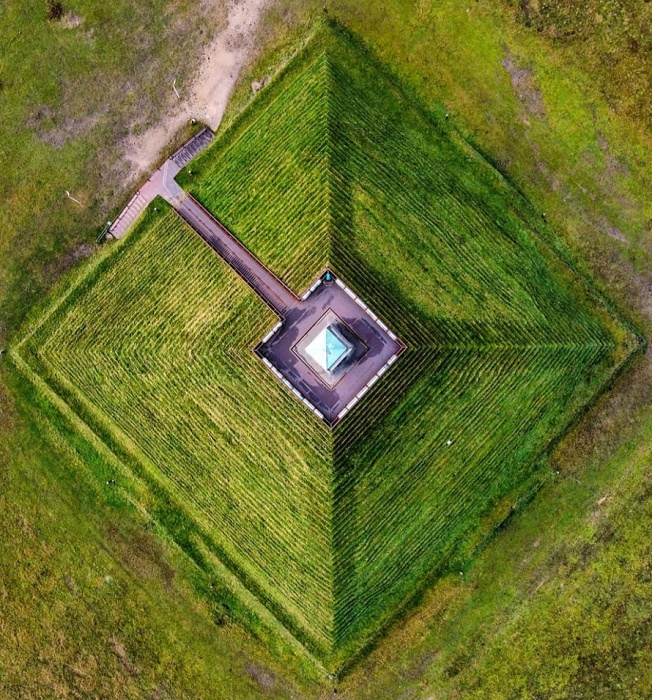 In the summer of 1805, the general and his army left the military camp and went to southern Germany to confront the Third Anti-French Coalition. One of the battles that took place at Austerlitz (now Slavkov u Brna, Czech Republic) brought great victory and glory to Napoleon’s troops, for they won a resounding victory over the Russian and Austrian armies.

It is worth mentioning that before the campaign Auguste de Marmont left the barracks and the pyramid itself in the care of three soldiers – Louis Fivre, Jean Baptiste LaRouche and Barend Philps – who were to maintain both the structure in Henschoten and the peculiar monument in proper condition. 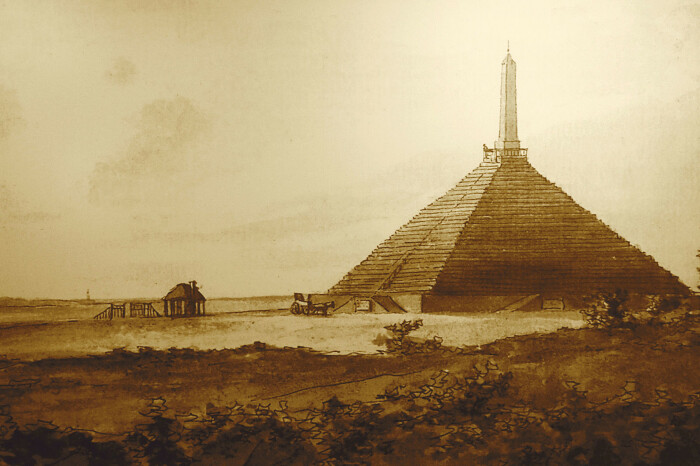 Because the Pyramid of Austerlitz was associated with the tyranny of the French Empire, no one watched over the site and it very quickly fell into disrepair (Utrecht, Netherlands)| Photo: justmejustjane.blogspot.com.

Trouble for the Dutch pyramid began just a year later. In 1806 Louis Bonaparte, the new king of Holland, apparently did not want the name of the brigadier general to be heard every time the pyramid was mentioned, ordered to change its name. As Marmont did not protest, Napoleon’s cousin renamed it the Pyramid of Austerlitz and gave the same name to the trading post in the nearby town of Bois-en-Ville. 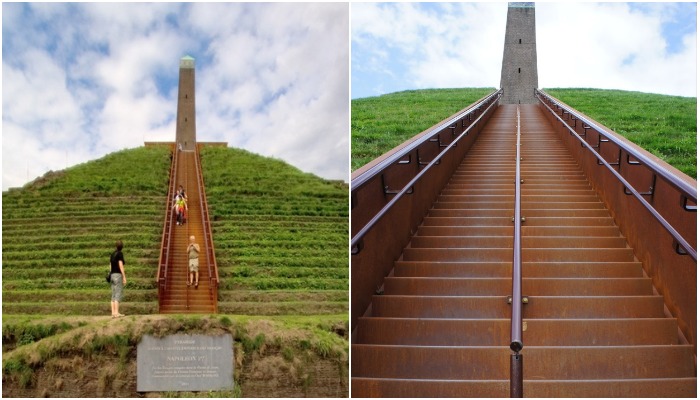 The staircase ends in a monument on the observation platform, which offers a spectacular view of the surroundings (Pyramid of Austerlitz, Utrecht). 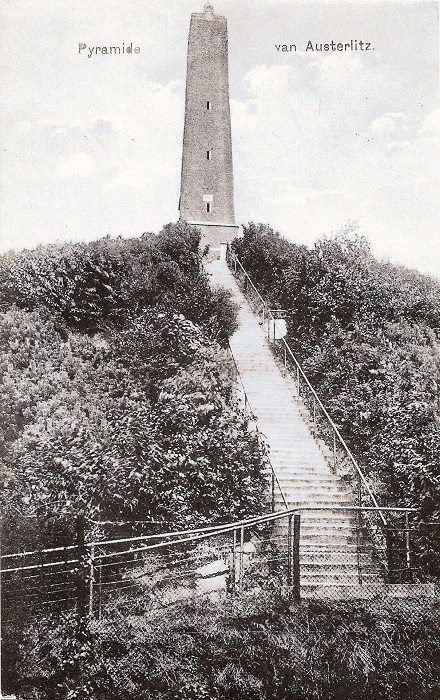 This is how the pyramid and stairs looked before the full restoration on the 200th anniversary of its construction (Pyramid of Austerlitz, Netherlands). | Photo: canonvannederland.nl.

Considering that the pyramid was built of earth and clay which were not actually anchored in any way, it is not surprising that it began to crumble under the influence of precipitation. The obelisk very quickly began to tilt and slide, so in 1808 it was decided to dismantle it.

In 1812, after the defeat of the Russian army of Napoleon, the locals immediately removed all the memorial inscriptions and memorial stones, because the French Empire has lost its influence and the seized land. And in 1816 the grounds where the military camp and the pyramid were located, were sold at all to the mayor of Utrecht – Hubert van Wijk, who did not show any interest in the pyramid at all. 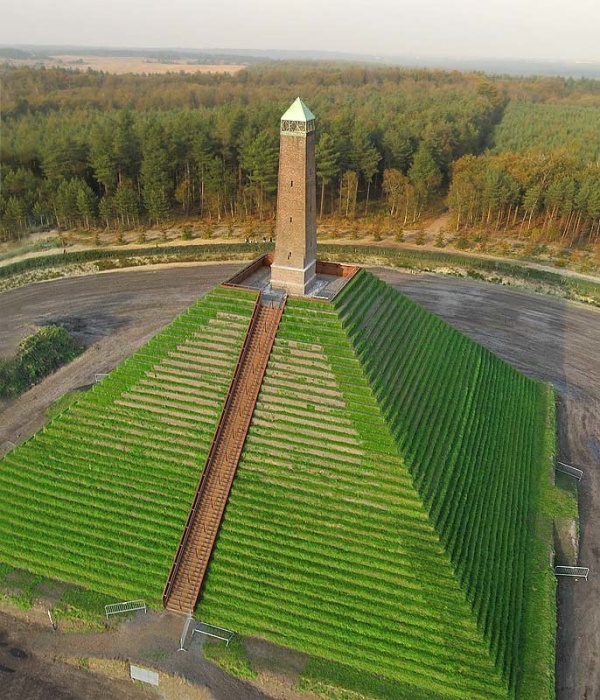 The stone obelisk on top of the pyramid appeared in 1894 and is still there today (Pyramid of Austerlitz, Netherlands). | Photo: landgoedzonheuvel.nl.

Such inaction led to almost total destruction until Johannes Bernardus de Beaufort came to power in 1894 and bought the Henschoten estate. Thanks to his efforts, the pyramid acquired not only recognizable outlines, but also a new obelisk, only already made of stone.

READ
Plaza España in the south of Seville, detailed description 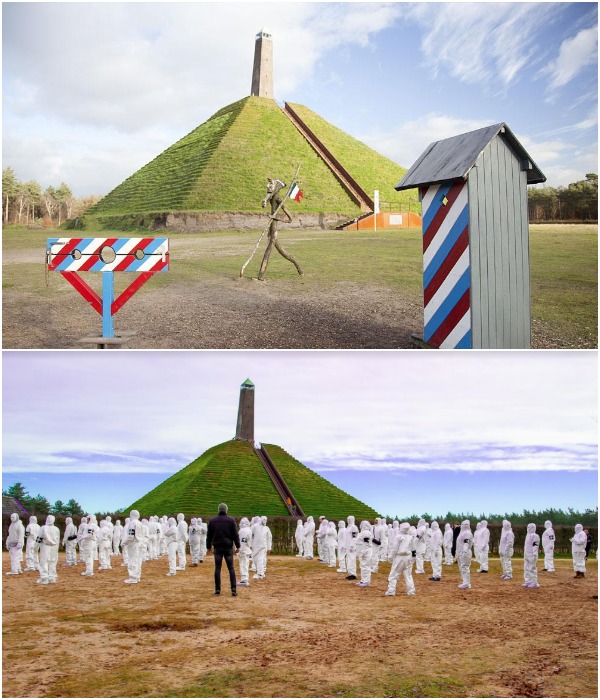 True, the descendants remembered the unusual monument only a hundred years later, when the question of celebrating the 200th anniversary of the Battle of Austerlitz arose. Within the framework of the program, the Austerlitz Pyramid Foundation was established in 2001-2004 to organize the extensive restoration of the earth pyramid. In order to avoid another fatality, to strengthen the site and stabilize the embankment, piles were introduced into the soil to hold the earth, clay and grass in place. 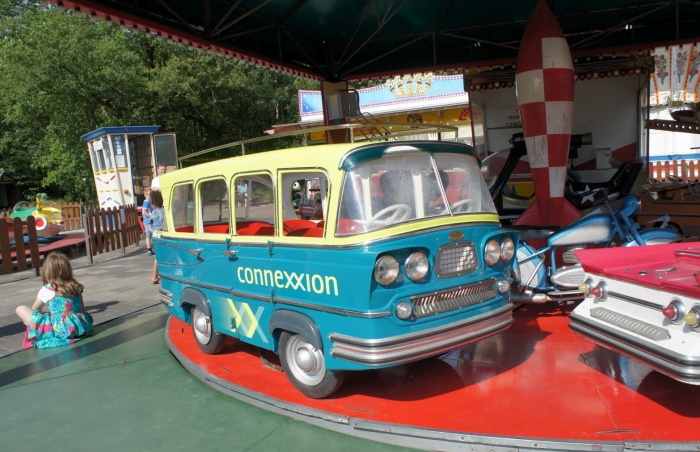 At the foot of the earthen Pyramid of Austerlitz an amusement park was opened (Utrecht, Netherlands)| Photo: justmejustjane.blogspot.com.

Noteworthy: For the anniversary of the construction Mont Marmont Pyramid had recognizable features, and in 2008 on the territory of the former military camp was opened a Center, where you can learn the history of the French rule period in the Netherlands. There was also organized a Luna Park and a playground for the youngest visitors to the unique attraction. Entrance to the historical complex is paid, but the cost is more than symbolic – 2.5 euros.

Why our soldiers during the Second World War, even in bitter cold refused to wear boots with a seam on the back?

The African continent is famous not only for the majestic pyramids, eternal summer and exotic nature. Going on a trip you should know about some architectural sights, which are unlikely to find in guidebooks, but they are no less impressive and interesting.