The Rhine Falls (Rheinfall) is considered the largest waterfall not only in Switzerland, but also in all of Europe in the category of plain waterfalls.

As the name suggests, it is located on the Rhine River, which in turn is the border between the administrative areas (or cantons) of Zurich and Schaffhausen in northern Switzerland, near the border with Germany. The nearest town is Neuhausen am Rheinfall.

The Rhine Falls are a small cascade in length. From the first, almost imperceptible, rapids of the waterfall to the final and most beautiful about 370 meters. Close attention is paid to the last parts of the cascade, which is known worldwide as the Rhine Falls. Sometimes this attraction is referred to as the Rhine Falls in the plural. 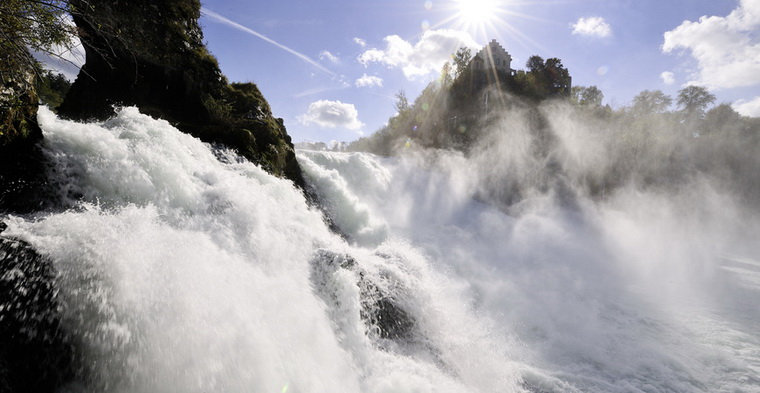 How did the Rhine waterfall come to be?

The Rhine River has been quite erratic throughout its history and changed its course periodically until it finally took over today. The waterfall itself was formed during the last ice age, about 14,000 to 17,000 years ago. Rock formations are clearly visible in the center of the waterfall. Geologists believe that this is the former bank of one of the oldest channels of this river. 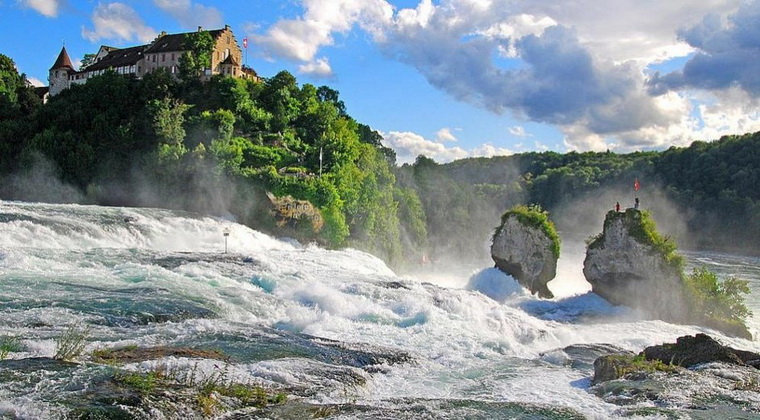 The rocks in the center of the Rhine Falls

The importance of the waterfall in the economy

As early as the 11th century, a small mill operated on the right bank of the Rhine Falls. Later, workshops and blacksmith shops were built. From the beginning of the 19th century, two dams were located in the area of the waterfall. They were used to turn the water wheels of the ironworks. Iron ore was found in the vicinity as early as the 16th century.

Given the power of the Rhine Falls, there has long been debate about the need to build a hydroelectric plant here. Industrialists, of course, are in favor, but environmentalists are opposed, because the presence of the power plant will definitely harm the local ecosystem. So far, the latter prevail, and there is no question of any powerful power plant.

The Rhine Falls and tourism

The region’s connection to the railroad network in the second half of the 19th century led to a boom in the hotel and tourist industry. Hotels and parks began to be built. The power and beauty of the Rhine Falls was known far beyond Switzerland, and tourists actively took up the attraction.

Now there are viewing platforms on the banks of the Rhine in the immediate vicinity of the waterfall. The most impressive one is right in the middle of the falls on a rock. You can only get to the platform by boat. 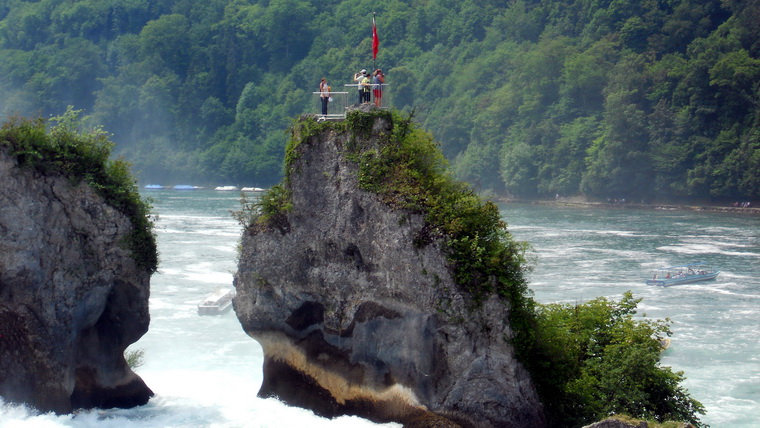 Lookout at the center of the Rhine Falls

There is a fee to visit the observation decks. The cost is CHF 5 per person. Children under the age of 6 are free.

It is noteworthy that today the economic benefit of tourist activities is estimated even higher than the construction of the power plant.

In addition to the waterfall, you can see Wörth Castle on the right bank of the Rhine and Laufen Castle on its left bank. Boat trips on the Rhine are also a great experience. 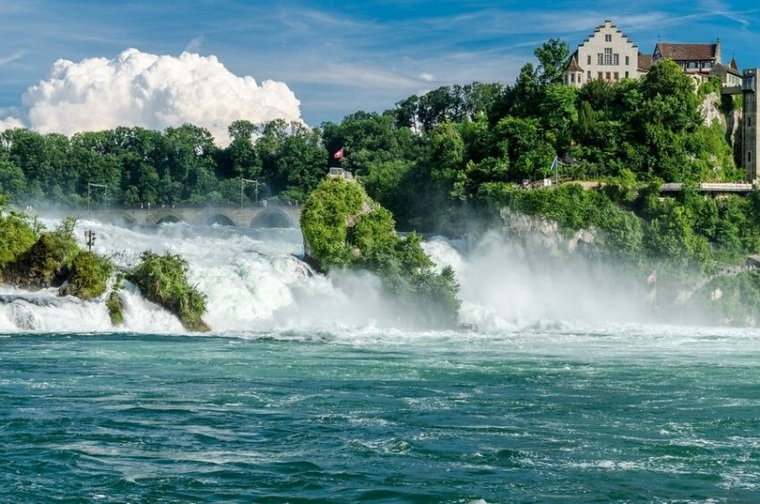 An interesting addition to the Rhine Falls is the railway bridge, built in 1857. The bridge has a walkway from which you can also view the waterfall. In addition, the railroad track over the bridge at the southern end runs right under the Laufen Castle. 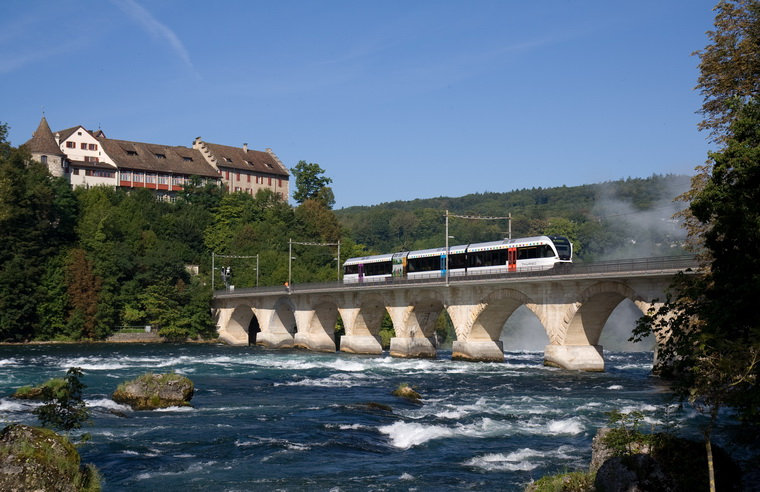 The railway bridge, built in the 19th century, is still used for its intended purpose

Periodically, fireworks shows are held at the Rhine Falls. The first such show took place in 1857 on the occasion of the opening of the railway bridge. 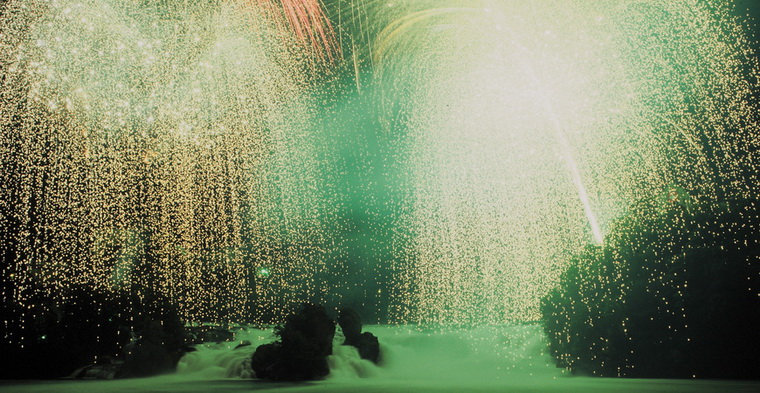 Fireworks over the Rhine Falls

How to get to the Rhine Falls 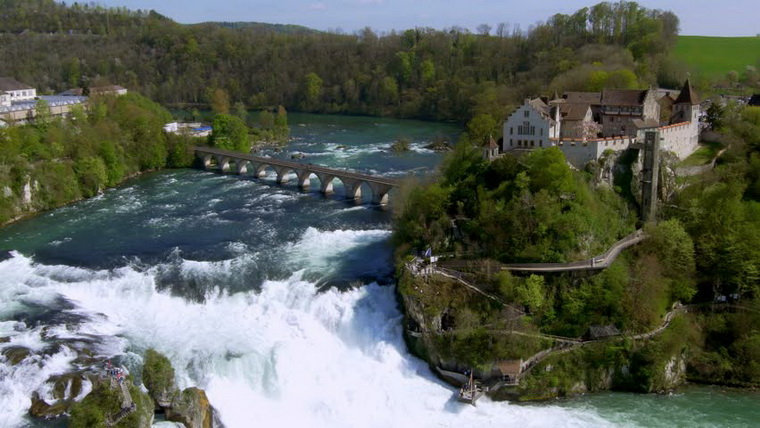 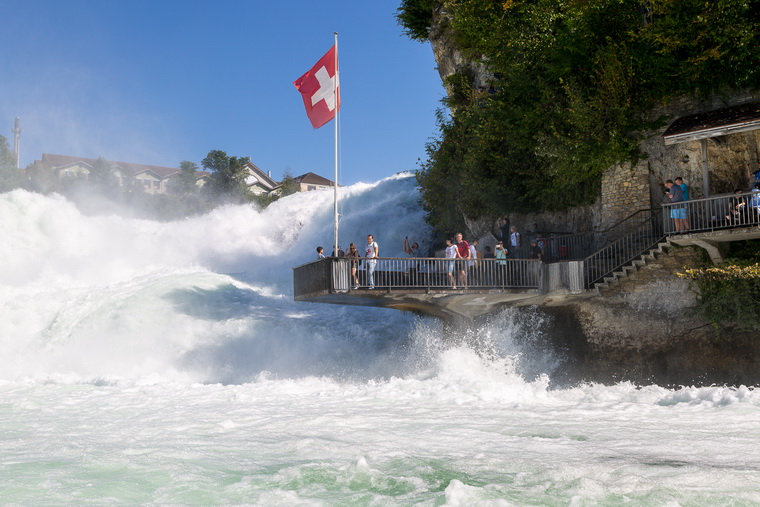 The Rhine Falls are the most powerful waterfall in Switzerland

In the northern part of Switzerland, close to the border with Germany, there is the largest waterfall in Europe – the Rhine Falls. The Rhine Falls of Switzerland divide the cantons of Zurich and Schaffhausen and the town of Neuhausen am Rheinfall is very close. 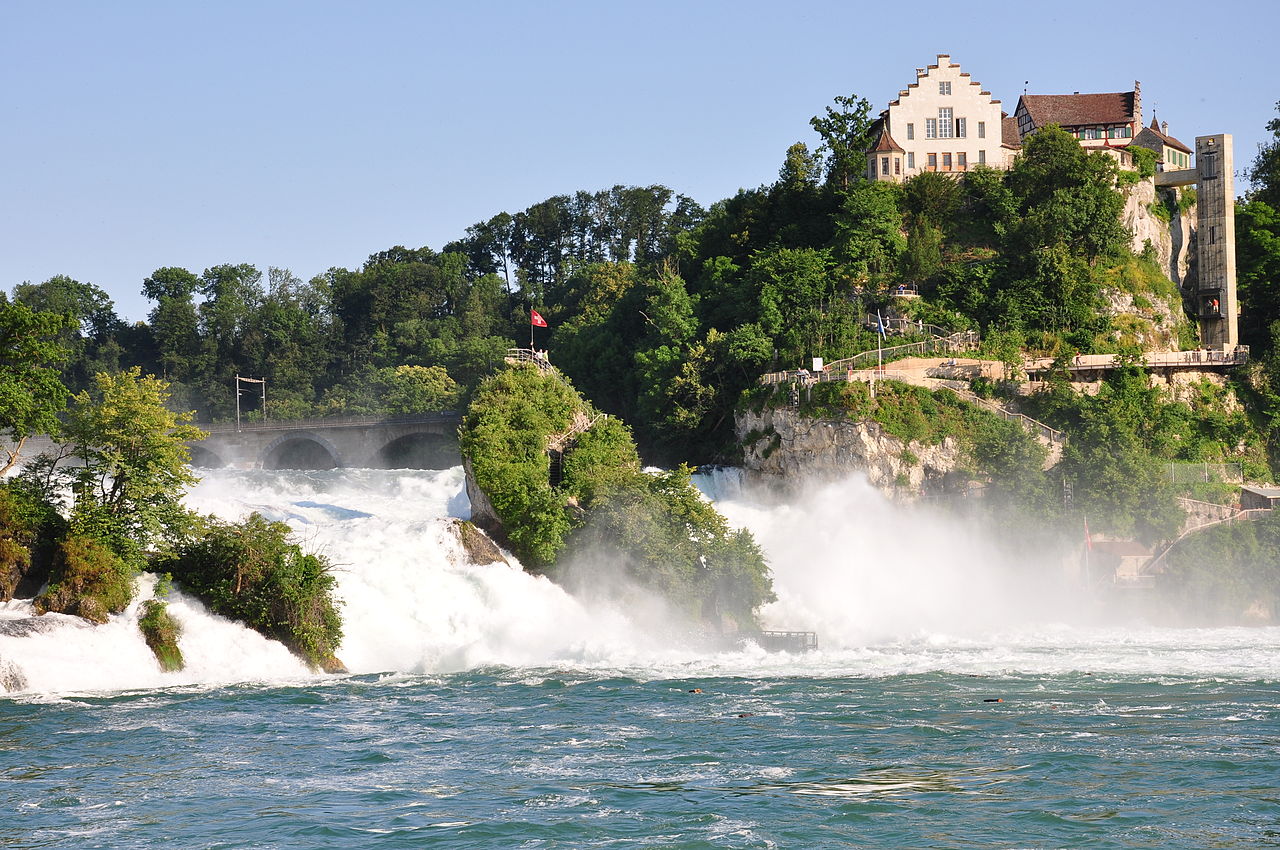 Scientists believe that the plain waterfall was formed about 500,000 years BC, during the Ice Age. The moving blocks of ice caused the landforms to change, the mountains to collapse, and the riverbeds to twist. Rushing rivers of the Rhine eroded soft sediment, which changed the riverbed many times, and today there are two cliffs in its center, which are all that is left of the rocky formations on the way of the river.

A side note! You can read more about Schaffhausen and its sights on this page. 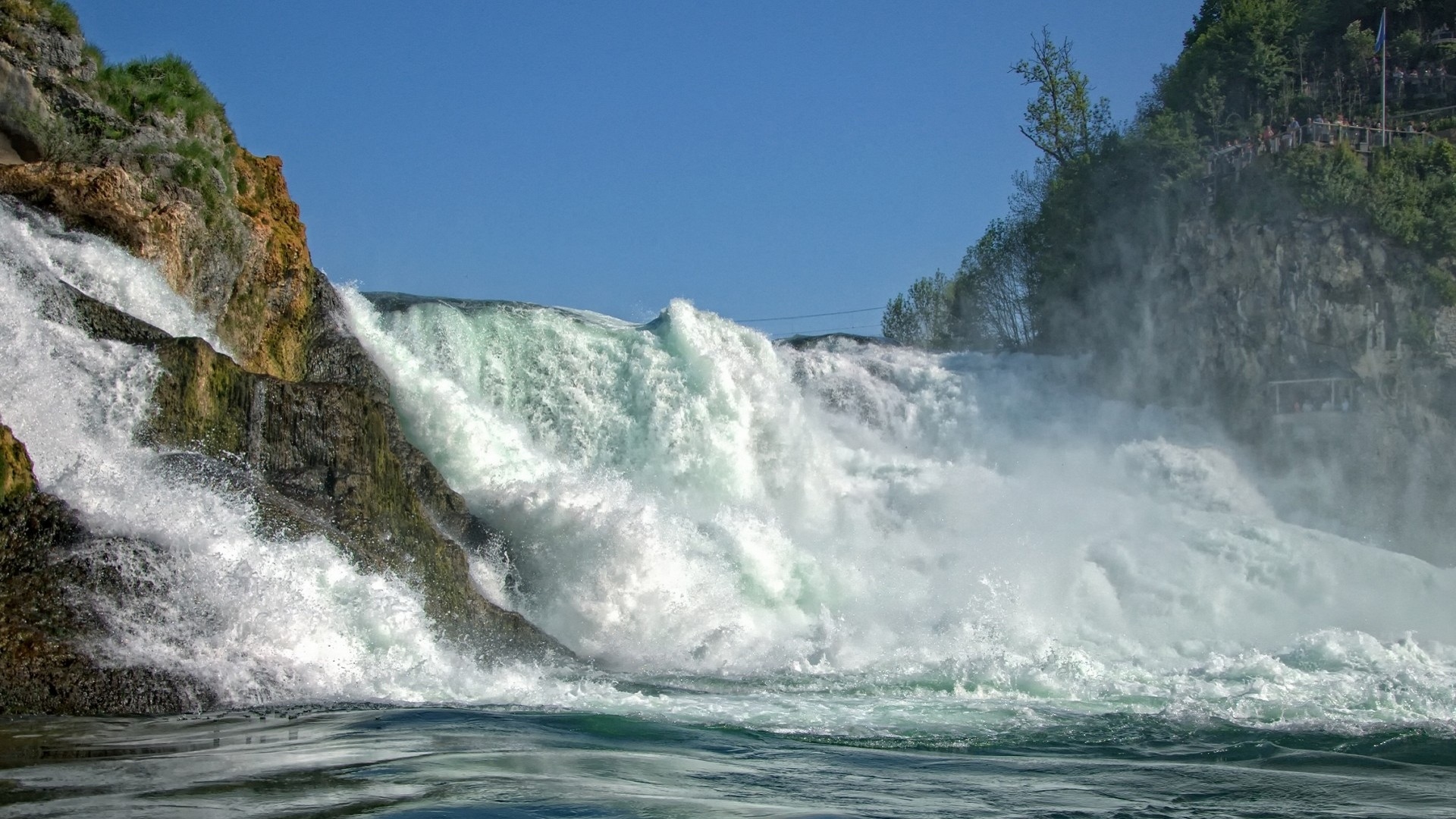 Although the Rhine Falls are no more than 23 metres high, they are the biggest not only in Switzerland but also in Europe in terms of the volume of water they throw down. At different times of the year the amount of water varies, and the greatest width of the stream reaches 150 meters. In the summertime the waterfall is the most impressive: about 600-700 m³ of water rushes down per second, it falls with a deafening roar, boils and surges. In winter the Rhine Falls are not so mighty and full-flowing – the amount of water decreases to 250 m³ – but it still looks majestic and beautiful. 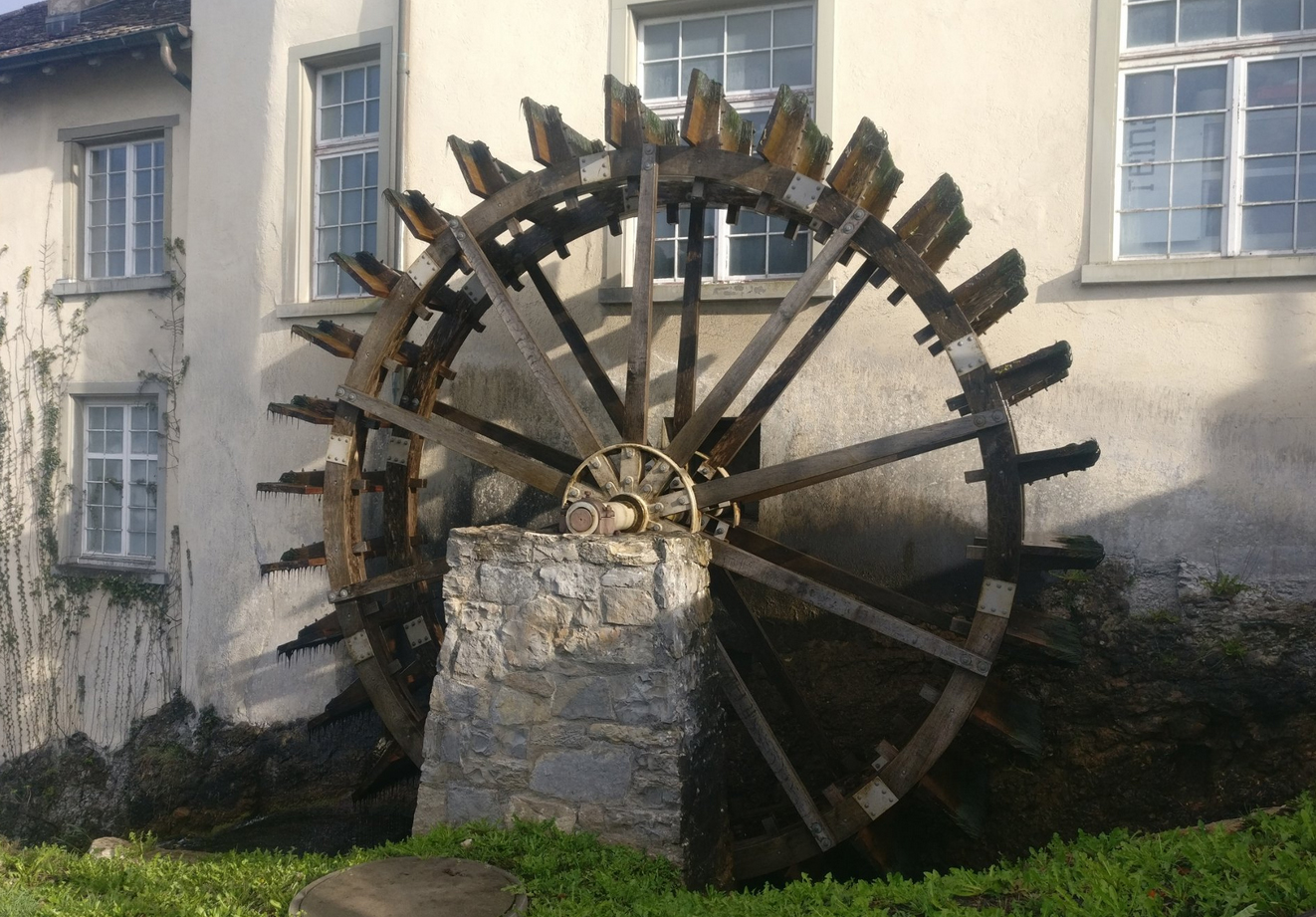 There were water mills on the north side of the waterfall as early as the 11th century. In the 16th century, if not earlier, iron ore was smelted at Rhine Falls. By the end of the 18th century, the furnace was shut down again. In 1810 Johann Georg Neer purchased the ironworks and built it, becoming the first significant industrial plant on the Rhine Falls.

Since the late 19th century, the authorities had plans to use the Falls for power generation, but as a result of active public opposition, this was prevented, allowing the surrounding landscape to be fully preserved. Nevertheless, there is now a small Neuhausen power plant with a capacity of 4.4 MW – in comparison, the entire waterfall has a capacity of 120 MW.

In the second half of the 19th century, a railroad was built near the waterfall. It was easier to get to the site, which led to a boom in the hotel industry in the area. The Hotel Bellevue was built across from the Badische Bahnhof train station between 1862 and 1844. Guests were able to access the Rhine Falls in peace while strolling through the various parks. The decline of the hotel industry in Neuhausen began at the turn of the century. The reasons for this were the growth of the tourist centers in the Swiss mountains and the conversion of Neuhausen into an industrial area.

What to see near the Rhine Falls

The Rhine Falls is a popular tourist attraction in Switzerland, capable of surprising even the most experienced and seasoned travelers. There is also a lot to see nearby. 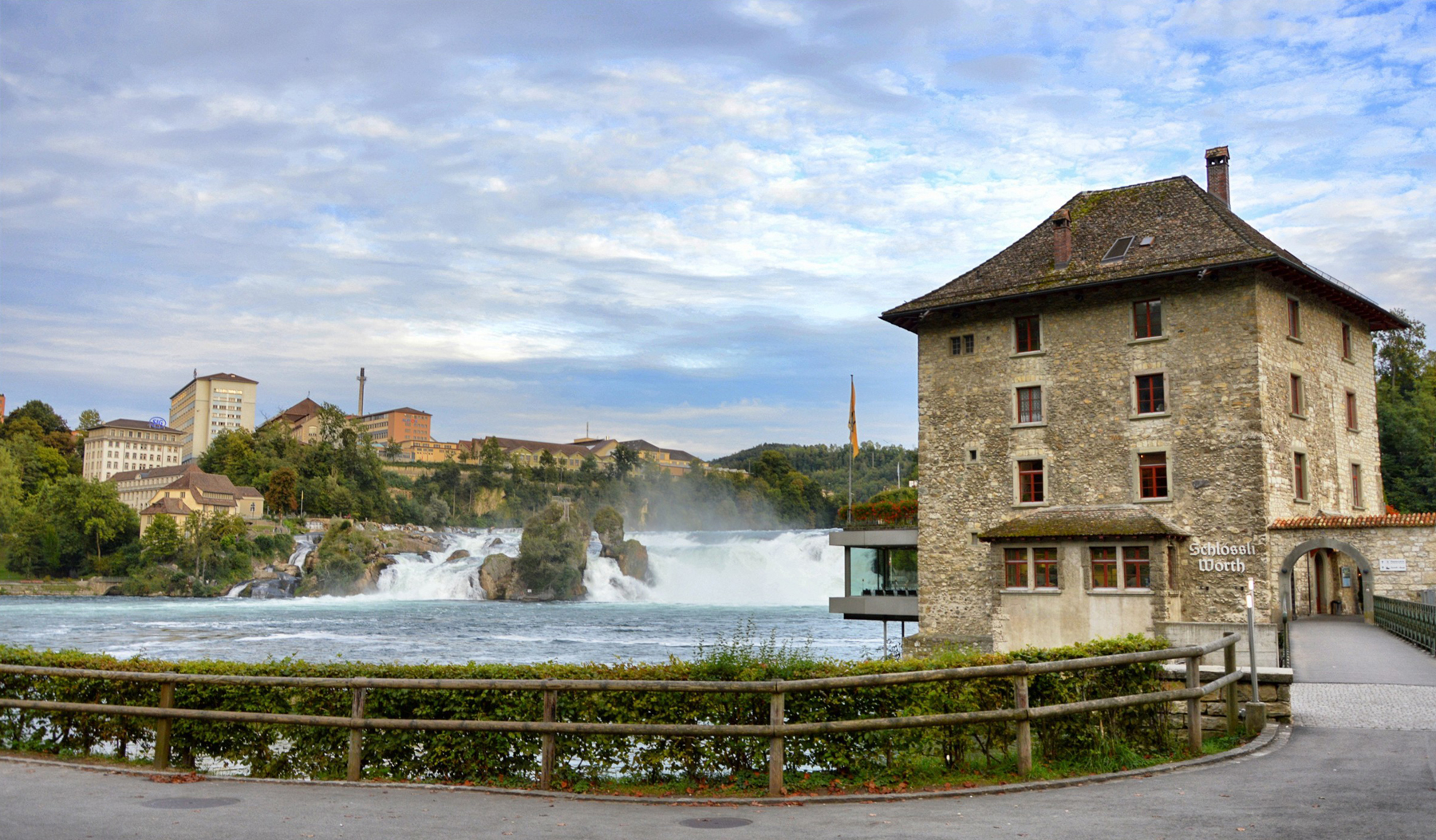 A little below the waterfall, if you look down the river, on a small island, towers Wörth Castle. In the castle there is a good restaurant with national cuisine, a souvenir shop, and a pier nearby. From this pier the boats depart, on which tourists can get to the “heart” of the waterfall – the cliff, standing in the middle of the flow of the river. There are two platforms on the top and middle of the cliff from which you can admire Switzerland’s famous natural attraction.

But of course! The most famous Chillon Castle in Switzerland. We tell you about it on this page with photos. 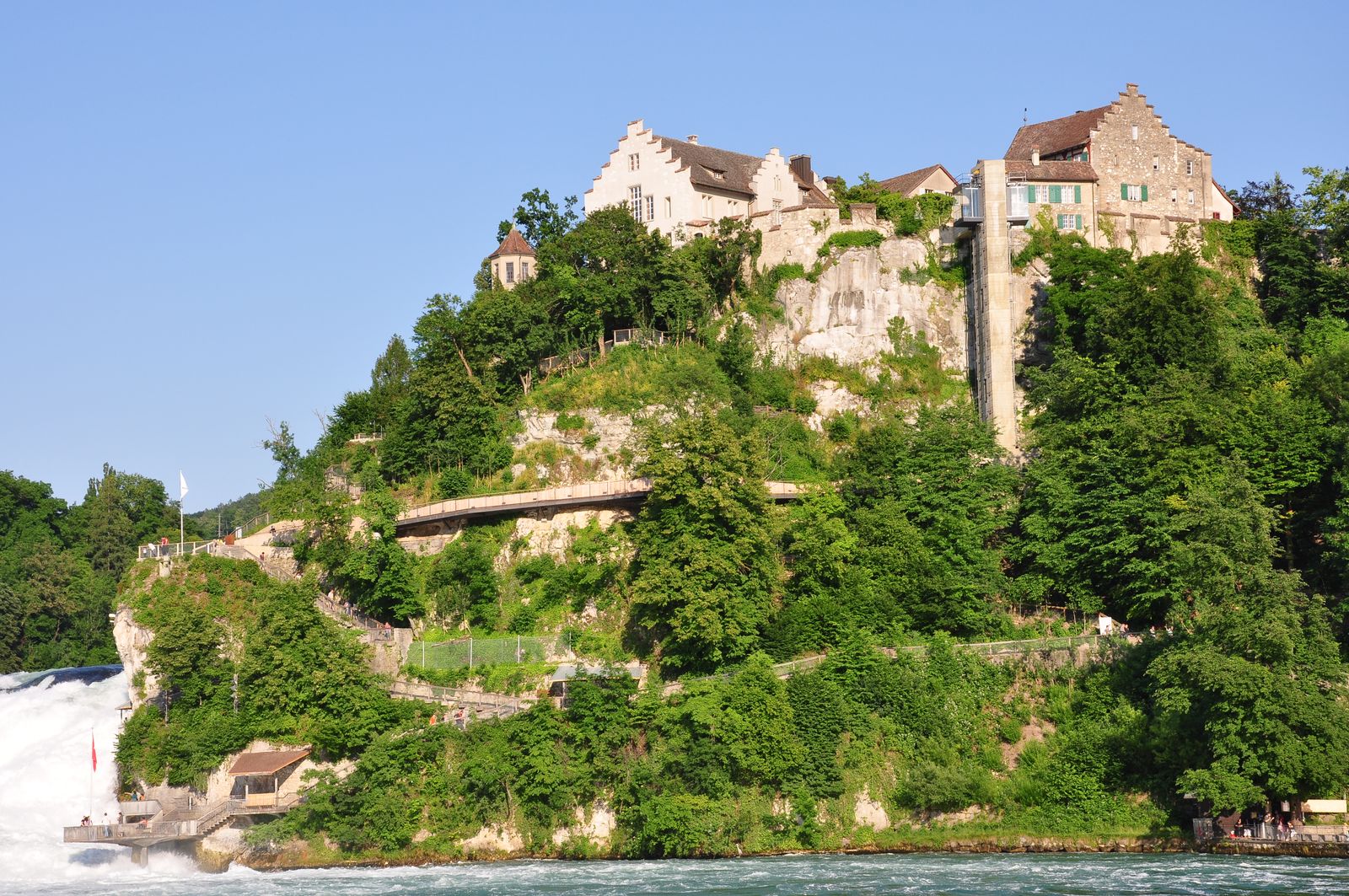 On the opposite bank, on the top of the cliff, there is the castle Laufen – it has a convenient access, there is free parking nearby. Not so long ago this castle was restored and opened to the public. Its premises have an exhibition with exhibits telling about the history of the local region, there are numerous photos of the Rhine waterfall. For wealthy tourists in the castle settled private boarding house, and for all wishing to buy something to remember the tour of Switzerland opened a souvenir shop. 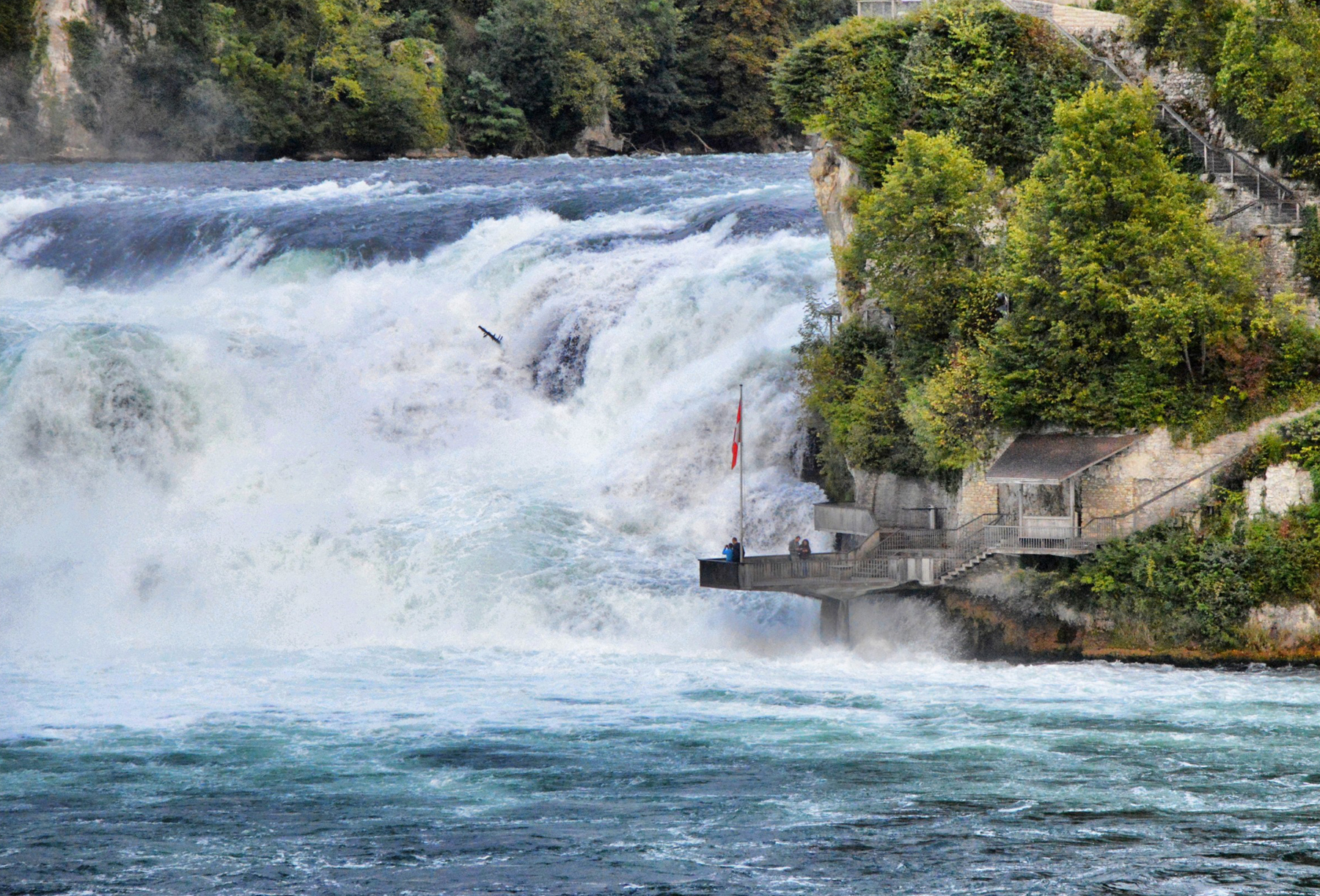 By the castle Laufen there is another observation deck, literally overhanging the raging river. Tourists can get to the main level of the site by elevators, which have a special passage for parents with baby carriages and people with disabilities, but to get to the higher level you can only by steps. Many people claim that it is on this terrace that you can feel the power and strength of the water element, and take the most impressive photos of the Rhine Falls in Switzerland. But you can only go there if you buy a ticket. 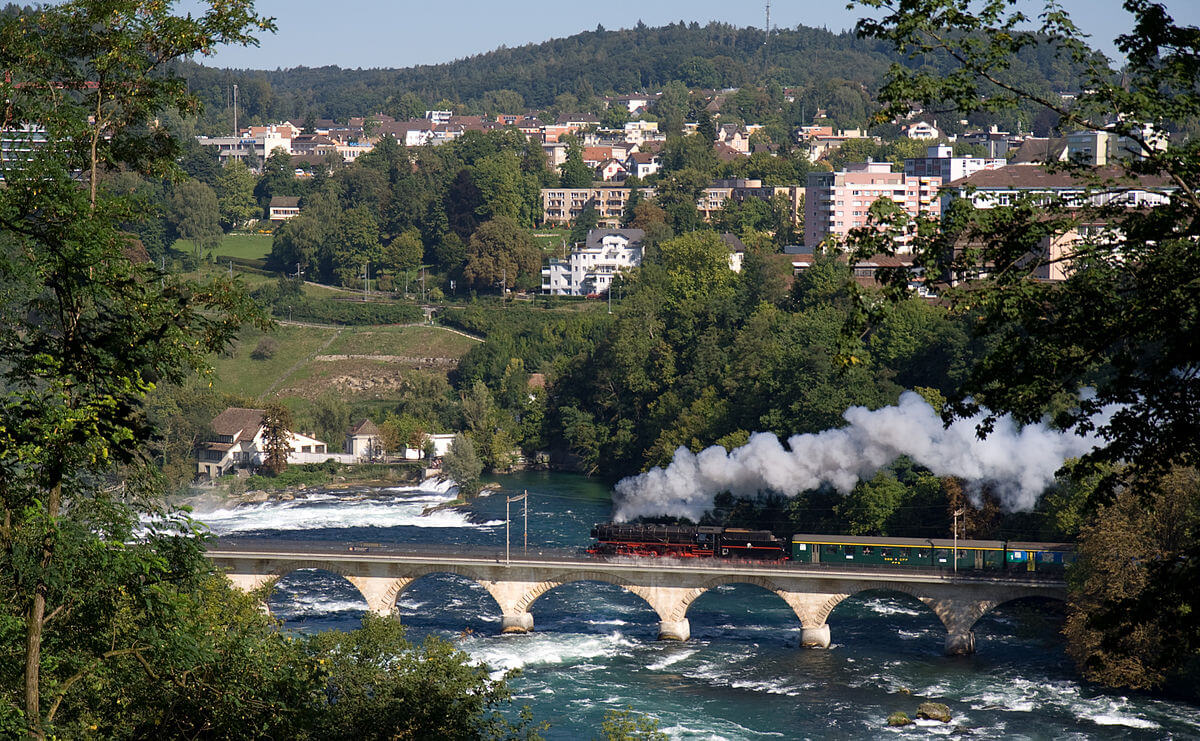 You can admire the gurgling water flow from afar. A little upstream of the river in 1857 built a bridge with railroad tracks, along which is a sidewalk. This means that it is quite possible for pedestrians to be there, combining walking with watching the natural elements.

READ
Fountain of Triton, Fountain of Bees and the Palace in Piazza Barberini

Every year on the night of July 31st to August 1st when Swiss people celebrate their national holiday the Fire on the Rocks show is held near the biggest waterfall in Europe. Fireworks and laser light effects are set off here, turning the entire surrounding area into a fairytale world. 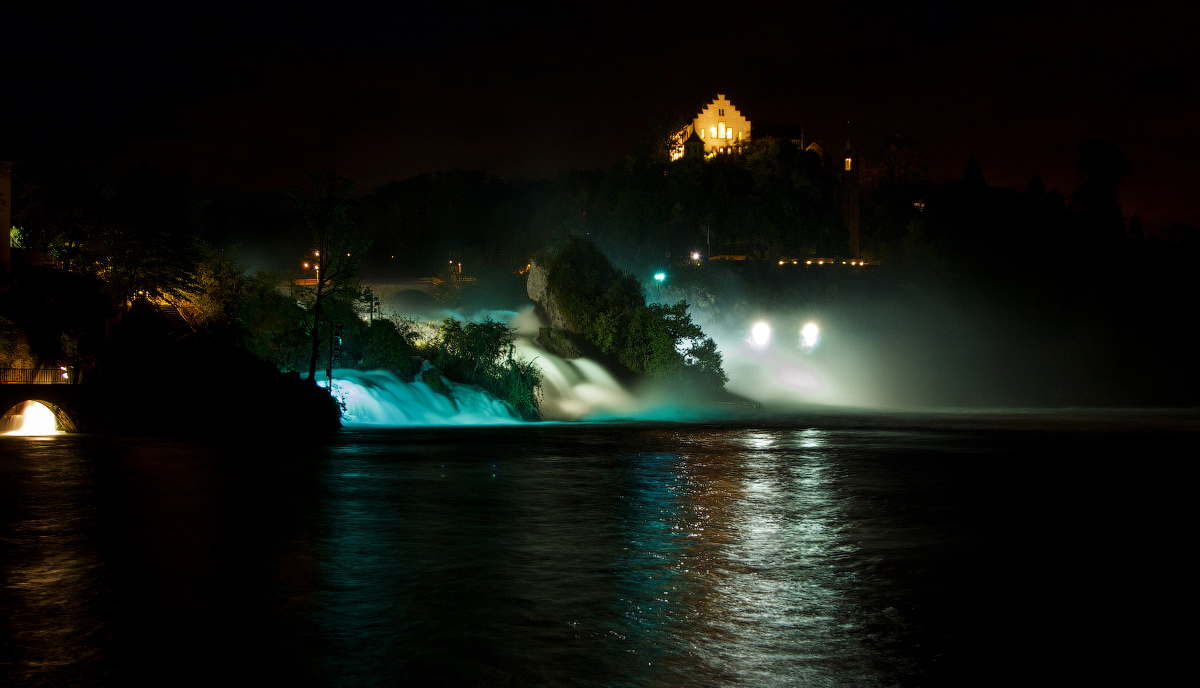 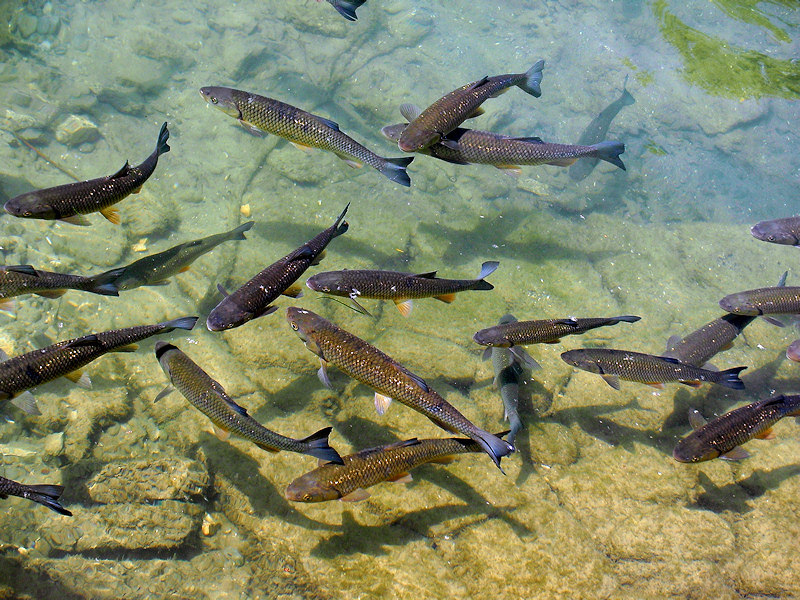 By the way, the lights are switched on daily at dusk – powerful spotlights installed near the water create a mesmerizing spectacle. Laufen Fortress, standing on a steep bank, illuminated colorful blue, getting a special mystique.

Tourists who want to not only look at the powerful water flow can diversify their holiday fishing. The local waters are rich in a variety of fish: chub, redfinch, eel, river perch, common perch.

How to get from Zurich on your own

You can get to the Rhine Falls from Zurich in different ways – how exactly is up to you. 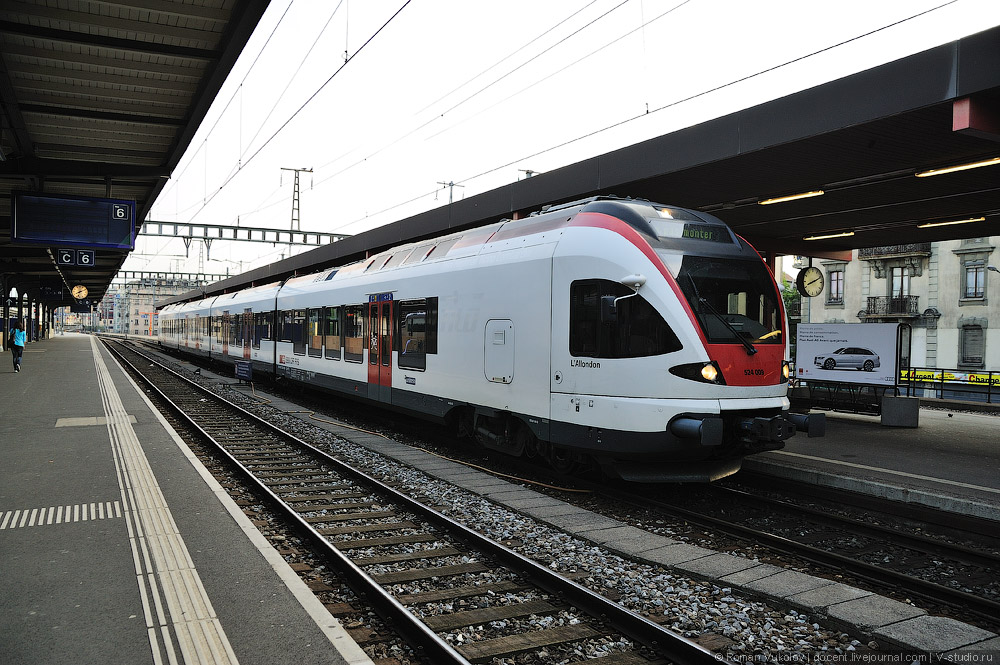 How to have fun at the attraction 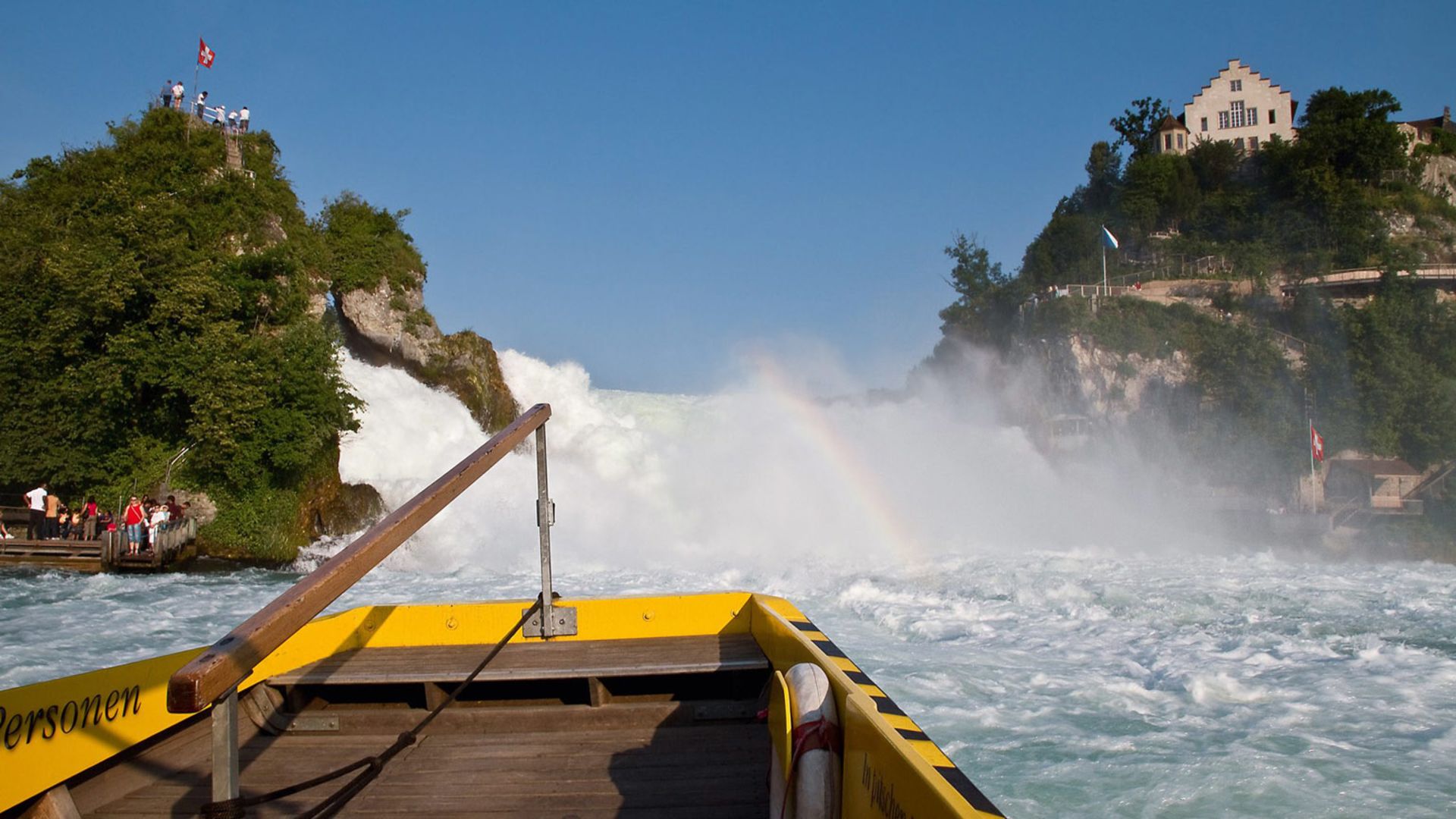 A boat trip to the cliff at the center of the waterfall costs from 7 to 20 francs, depending on the boat and the duration of the attraction – from 15 to 30 minutes. A cruise on the water from Laufen Fortress to Wörth Fortress and from there to the cliff costs 10 francs for an adult and 5 for a child. 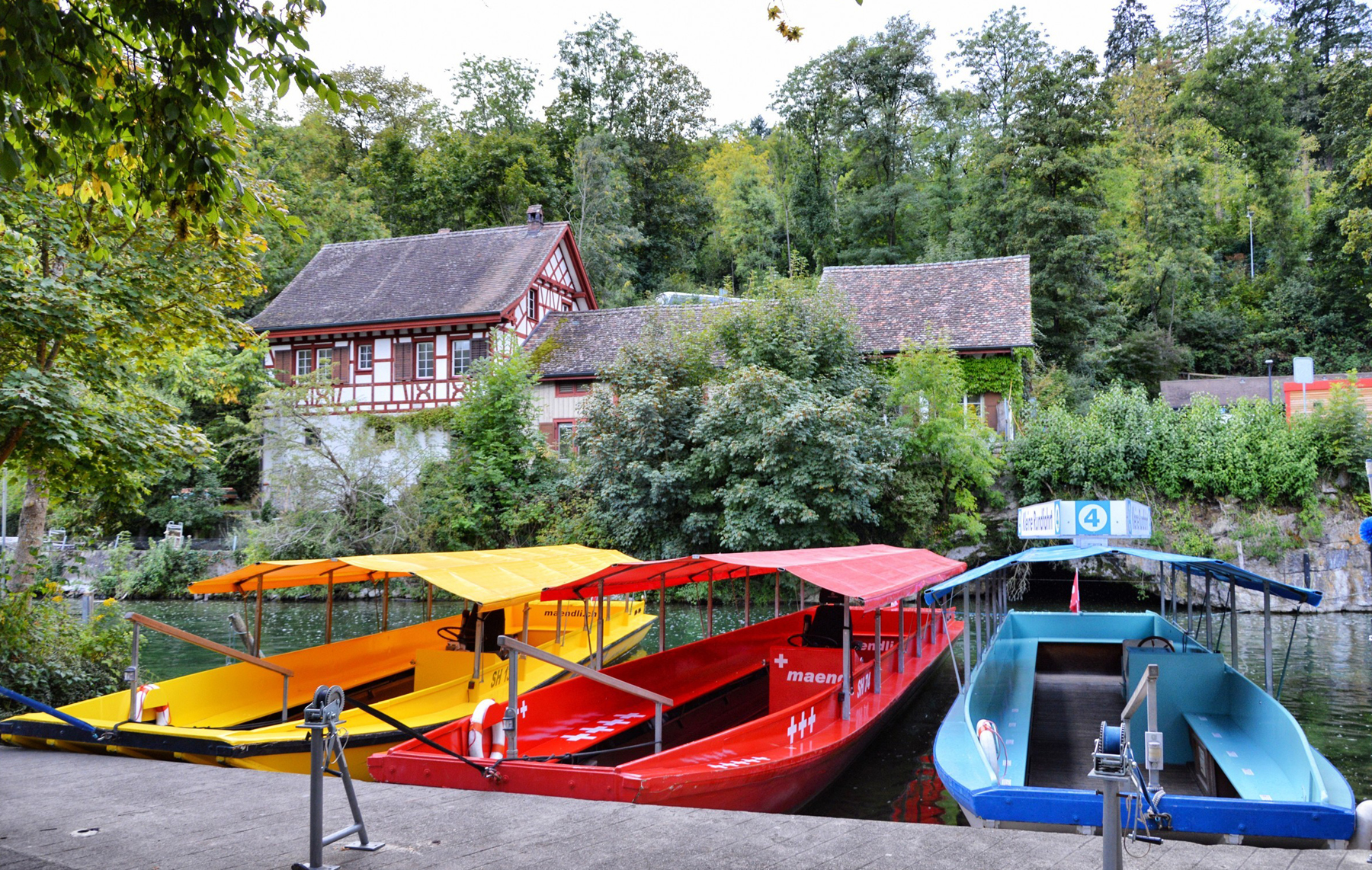 If you have a group of like-minded people or friends, you can book a circular tour, which begins with a trip to the Rhine Falls Basin, then a leisurely trip down the river. A 4-hour rafting trip down the river costs 39.5 francs per person.

READ
Heidelberg Castle and the largest wine barrel in the world

Prices for parking and admission to the observation decks

You can view the waterfall from different angles.

On the north bank, access to the observation deck is free, but you will have to pay for parking:

On the south bank (Zurich side), parking is free. Entrance fee to the observation deck (CHF):

Euros are accepted for payment.

All prices in this article are for May 2021.

What’s good to know for tourists 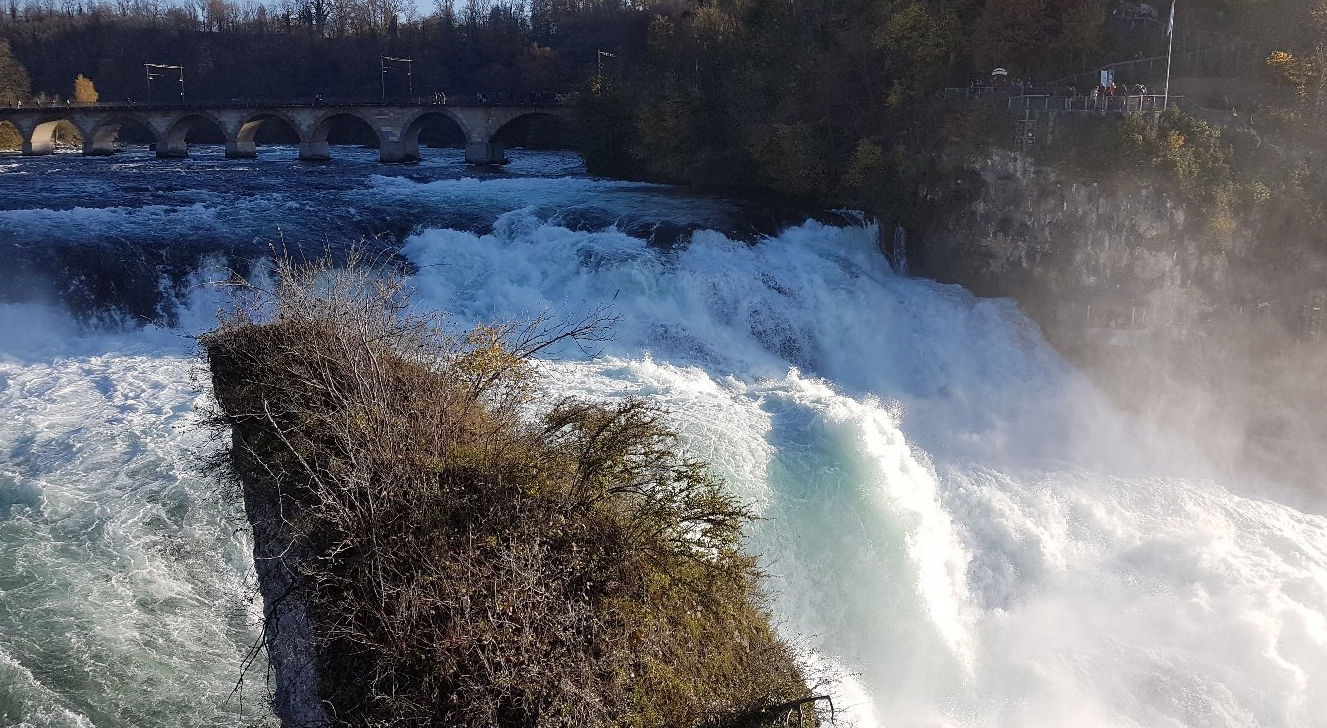 The Rhine Falls (Switzerland) is an outstanding natural attraction that everyone who travels in this amazing country wants to see.

Video: details on how to get to the waterfall from Zurich on your own, aerial footage and useful tips for the traveler. It’s a must-see!

Updated: 11 July, 2021 Schaffhausen (Switzerland) is a city located in the northernmost part of the…

Updated: 23 Apr, 2021 The city of Zug (Switzerland) is the administrative center of the canton of Zug, Switzerland.

Updated: 1 Aug, 2021 Lauterbrunnen (Switzerland) is one of those places that is often…

Updated: 31 Jul, 2021 Manavgat Waterfall is a charming corner of the world located in…