The Naked History of the Earth – the Giant’s Causeway

It’s not often that I get to see such geological objects in person. When it happens I am always immensely pleased and happy. Today’s information and story is about the Giant’s Causeway.

This site is located in Northern Ireland on the Atlantic Ocean about 17 kilometers north of the town of Coleraine.

In 1986 the Giant’s Causeway and the Causeway Coast, on which it is located, were designated a UNESCO World Heritage Site.

In 1987, the site was declared a national reserve by the Department of the Environment of Northern Ireland.

Most of the columns are hexagonal, although some have four, five, seven or even eight corners.

The tallest column reaches a height of about 12 meters.

According to local legend, the columns are the remains of a dam built by an Irish giant warrior named Finn Mc Cumulus.

One day, he decided to fight the monstrous one-eyed foe Goll, so as not to get his feet wet, he hammered a number of pillars into the bottom of the Irish Sea and thus built a bridge. Tired, Finn lay down to rest.

At this time Goll crossed the bridge into Ireland and appeared to Finn himself. Finn’s wife, pointing to her sleeping husband, lied, saying it was her infant son.

In addition, she treated Goll to flatbread inside which she had baked flat iron pans, and when the giant began to break his teeth on them, she gave the second flatbread – a plain one – to “baby” Finn, who ate it calmly. Imagining what a giant the father of this not insignificant “baby” would be, Goll fled in horror, destroying the bridge on the way.

Personally, I am closer to the scientific basis:)

About 50-60 million years ago, during the Paleogene period, the Antrim site was subject to intense volcanic activity as molten basalt seeped through the sediment to form extensive lava plateaus.

As it cooled rapidly, the volume of matter shrank (similar to what is observed when mud dries out). Horizontal compression led to the characteristic structure of hexagonal pillars.

According to another version, the cause of formation of such a structure is convection in a viscous liquid cooled from above (see Benard cells).

I found a short article “The mystery of the Giant’s Road is solved”. I have not copied it here, if anyone is interested in the details you can go to the link.

The discovery of the “Road of Giants” is attributed to the Bishop of Derry, who visited it in 1692. The following year he presented a report to the Royal Society in Dublin and the whole world learned about the place.

“The Giant’s Road” attracted international attention when the Dublin artist Susannah Drury created watercolor paintings in 1739; they won an award in 1740.

In 1768, this drawing appeared in the 12th volume of a French encyclopedia. In a caption to the image and plaques, French geologist Nicolas Desmarest suggested for the first time in print that such structures were of volcanic origin.

A little general information I have given you, now let us just admire the various views and fragments of this Irish geological beauty.

You’ve already noticed in some of the shots people – there are a lot of them here, because the “Road of Giants” is one of the most popular tourist attractions on the island, and specifically in Northern Ireland it’s number-one.

To be honest, I love both options when visiting such natural sites. The first is when there is no one at all, such as I was in Charyn Canyon, where I walked completely alone, or in Yangi-Kala, where there was only our group. In this case, you get extraordinary feelings and impressions of unity with the naked planet. You are just a small particle on its skin.

READ
Cave Lake Melissani - the abode of the nymphs. Greece

The second option, on the contrary, involves a large number of people. It is also interesting to me, but from a photographic point of view.

I like the combination of the inertness of geological formations and the person who is there in that moment.

In these moments, I rewind an imaginary tape over hundreds of years and imagine Brownian motion. In seconds, day changes to night, clouds appear and disappear, rainbows, stars, comets. It’s all very beautiful.

This can be seen in reality, for example, having filmed ten minutes in timelapse mode on an iPhone. The rocks stand still, and the tourists run like ants back and forth. So people are not superfluous here, we are also part of nature.

This is how from the height looks the most basic and most visited place of the natural complex.

And this is a side view. The strip of land in the foreground is the “Road of Giants.

Next to it is an ordinary road. It leads here from the parking lot.

People are walking around the rocky polygons, taking selfies and enjoying the expanse of the sea.

If you’d like a little privacy, though, you can. You walk down the Giant’s Causeway and on you go.

There are two paths on the side of the mountain that merge into one.

My feeling is that about 50-60 percent of tourists stay put and don’t take the time to hike long distances. And in vain, because there is something to photograph, such as the highest columns in these parts.

The lower part of the stone giants at close range.

Going further. There were practically no people here. It’s beautiful!

At the end of the trail I walked through this man-made archway.

This is the final part of the trail. It ends here (around the corner).

Then you can go back the same way, but it’s better to go to the second trail (which is higher) and then climb to the top of the mountain slope.

The views from the top are gorgeous.

It was on this route that I shot “The Way of the Giants”. You don’t even need a quadcopter.

All in all, the place is amazing, I’ve enjoyed it immensely: the nature, the people and the creative solitude.

If you haven’t been here yet, I wish you sooner to make this small but romantic journey. Have a great walk!

Previous posts in this series

The Giant’s Road, a construction of ancient giants. Northern Ireland

Once again, nature shows us one of her phenomenal tricks. On the coast of Northern Ireland (forgive the tautology, but that’s the way it is) is the Giant’s Road. This unique phenomenon of nature looks like unusual pillars, the cross-section of which is very similar to a bee honeycomb. 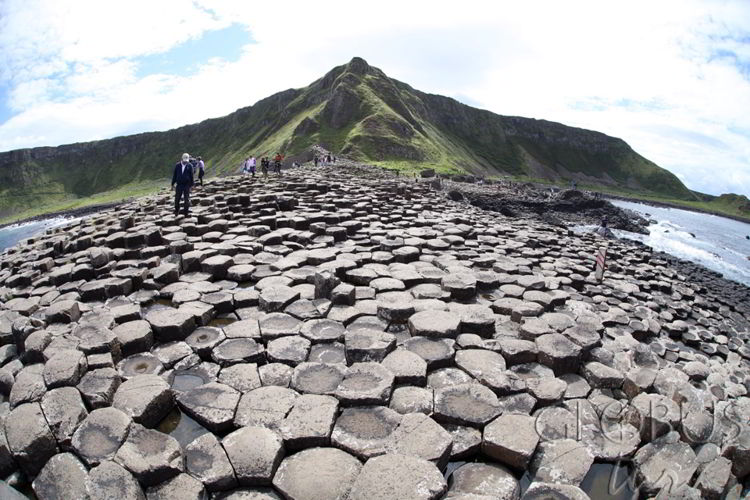 Pillars (or columns) are so tightly pressed together that between them even a knife can not stick. Approximately the same way the large stones in the walls of the ancient city of Saxcayhuaman are fitted, the only difference being that it was made by people there and it was made by nature here.

The Way of the Giants on the map.

Please note that Northern Ireland is an administrative part of the UK, not a separate state.

The Giant’s Road is located 3 kilometers north of the town of Bushmills.

This attraction has about 40,000 basalt columns connected to each other. Most of the columns are hexagonal, but there are also four, five, seven and eight-sided copies. Their height reaches 12 meters. The diameter of the columns varies from 30 to 50 cm. 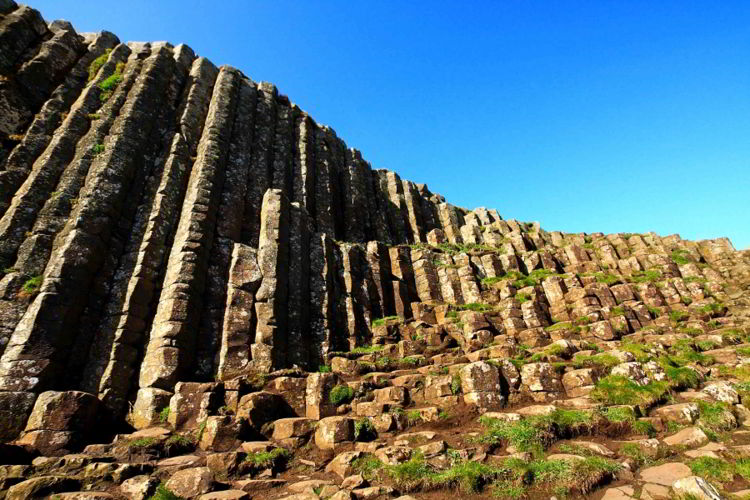 Looking at this unusual natural construction, it is hard to believe that it appeared by accident. According to the official version of scientists, such extraordinary columns arose after a volcanic eruption in ancient times. 50-60 million years ago there were active volcanic events. Flows of molten basalt formed huge lava fields. With rapid cooling, the volume of matter decreased, and the horizontal compression contributed to the appearance of these geometrically regular structures.

There is also a hypothesis according to which the Road of Giants was formed as a result of viscous matter convection in conditions of cooling of the upper layers.

The legend of the Road of Giants

Local residents, of course, connect the appearance of this structure with an ancient legend. It says that the hero of Celtic myths, the warrior, sage and seer Finn Mc Cumulus decided to wrestle with a huge one-eyed monster named Goll, who lived in Scotland. But by some ridiculous coincidence or accidental incongruity, the heroic hero … was afraid to get his feet wet.

Finn had to hammer a lot of columns into the bottom of the sea – a kind of bridge to the neighboring island. He was very tired and decided to sleep before the battle. While our hero was peacefully asleep, Goll, not waiting for his adversary, himself came to visit him over the bridge that had already been built.

He was met by Uma, Finn’s wife. Judging by her name, the lady was no fool. She was a little sly: pointing to her sleeping husband, she said he was her child. As you can understand, the size of this fellow did not look like a child at all. Uma seated the giant at the table and began to treat him with scones, in which she previously baked iron pans. She set aside the other scones (without the pans inside) for her husband. When Goll began to break his teeth eating his treats, the awake Finn was quietly eating his scones “with both cheeks”. Realizing that if the baby is like this. his daddy will be invincible, Goll panics and runs away and destroys the bridge on the way, cutting off the pursuit.

Whether the Giant’s Causeway appeared as the myth says or as scientists suggest is not so important. The main thing is that now we have another unsolved and therefore very attractive natural attraction. 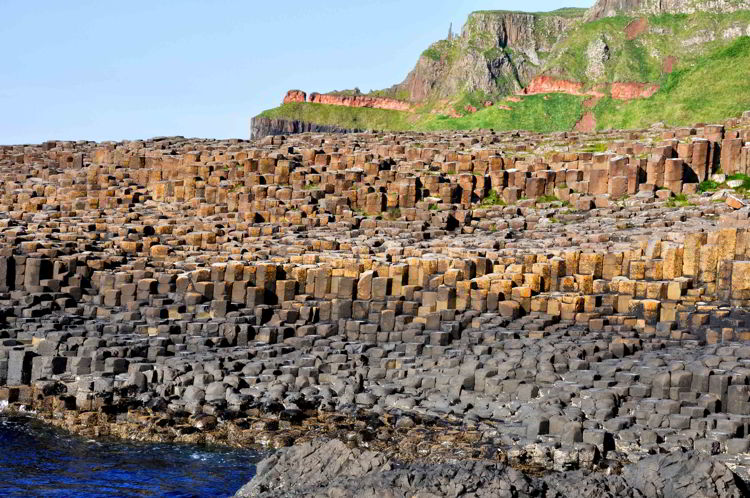 The Giant’s Road runs more than 270 meters along the coast and about 150 meters along the bottom of the sea.All the columns are very hard and have a dark color. This is due to the high content of magnesium and iron in their composition. Such a mixture of substances is practically immune to the destructive action of the sea waves and wind.

Other giant landmarks nearby

Nearby Giant’s Causeway are cliffs with original names. The Harp Cliff – its pillars are curved and slope down to the shore. The Organa Cliff, whose pillars are straight and very similar to this huge musical instrument.

There are also cliffs Giant’s Weaving Machine, Coffin and the Giant’s Eyes. You can also see the Giant’s Shoe. This is a huge boulder shaped like a shoe and 2 meters high.