The coast of Australia is not just beaches and ocean. There are many interesting sights to see. At the southern end of the continent is the Great Ocean Road, or Great Ocean Road, which runs along the coastline in Victoria. You can get tremendous views of the coastline and ocean waves. This road takes you to a cluster of limestone cliffs right on the beach. They are known as the Twelve Apostles. 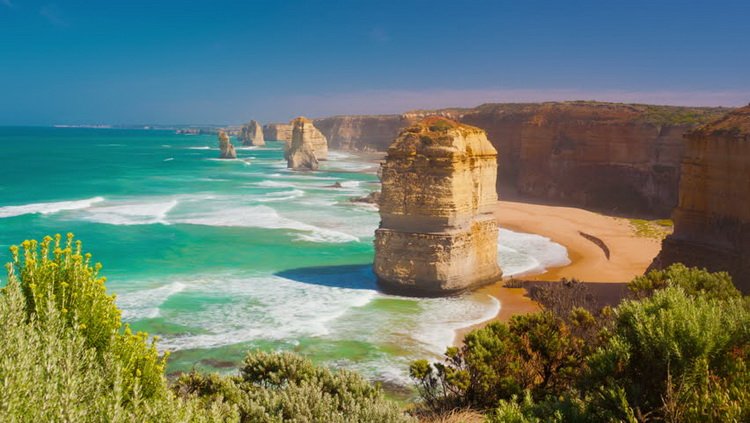 The Twelve Apostles on the map.

This natural formation was originally called the Pig and Piglets, where the pig was the mainland and the piglets were the rocks. But in 1922, in order to attract tourists, it was decided to rename them the Twelve Apostles.

The idea worked. The sonorous name interested travelers and now the impressive stone pillars up to 45 meters high are a popular attraction in Australia. Every year about 2 million ordinary tourists and professional photographers come here. 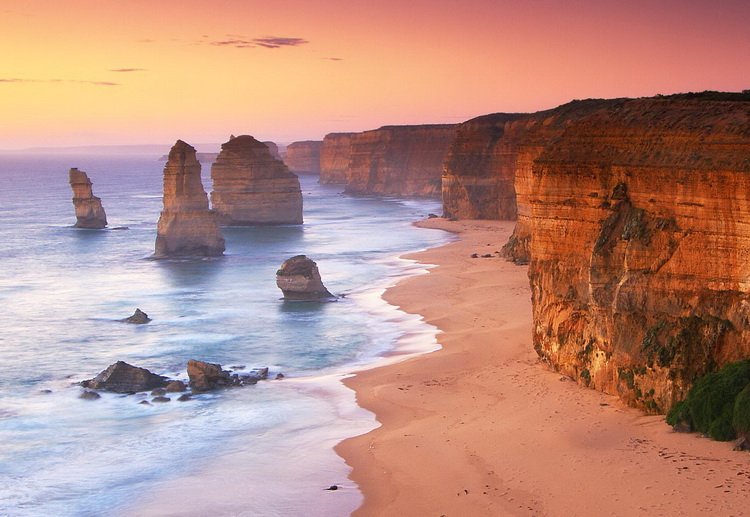 It is logical to assume that the name of the attraction coincides with the number of rocks. But do not be surprised if you arrive here and do not count all twelve. The fact is that now these unusual formations only 8. And before 2005, there were only nine. The name is just a marketing ploy, as the Twelve Apostles sounds much more appealing than the Eight Apostles (especially to people familiar with the Bible), and certainly more euphonious than the Pig and Pigs.

How the twelve apostles came to be.

The twelve apostles were formed naturally by the erosion of the coastal cliffs. Sea waves have washed away the soft limestone rocks on the shore for millions of years, cutting off large chunks of rock from the shore and creating this amazing masterpiece.

READ
Niue - a secluded tropical paradise in the Pacific Ocean

Scientists suggest that the rocks are more than two million years old. The process of erosion is ongoing, which is why one of the rocks collapsed in 2005, leaving us with only eight of them. It was the tallest, by the way, about 50 meters in height. 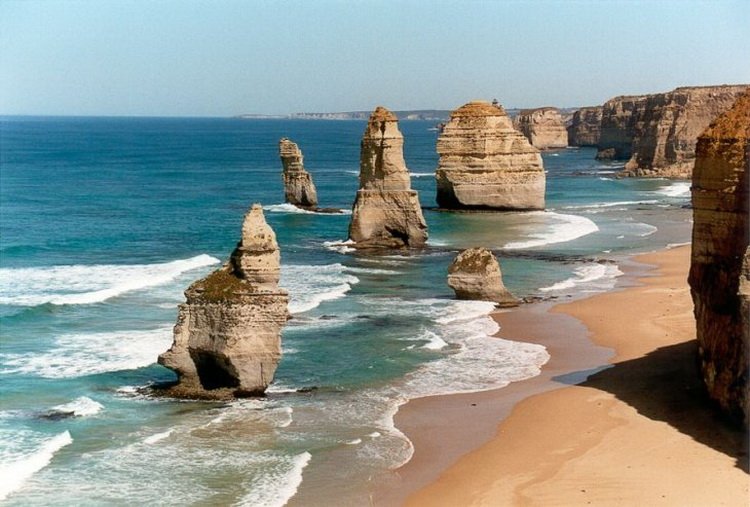 Now all that is left in its place is a pile of stones, which will gradually become sand.

Most likely, the other stone pillars in the course of time will meet the same fate, as the speed of erosion is about 2 cm a year, but the sea surf, wind and rainfall may well create here similar rocks. We just have to wait a little longer (a couple thousand or millions of years).

In order to somehow protect this unique natural monument the 12 Apostles were incorporated into Port Campbell National Park in 1964.

You can view these remarkable formations from observation decks and hiking trails along the very edge of the coastal cliffs. Or see them from a nearby helicopter that can be rented. There’s also a parking lot and visitor center within walking distance.

But to go down directly to the foot of these giants is extremely difficult. It is practically impossible, because there is not a single descent to them. But one kilometer from 12 Apostles there is a staircase (Gibson Steps) to the beach. It takes you to the coast and a couple of the same rocks as those in the Twelve Apostles. 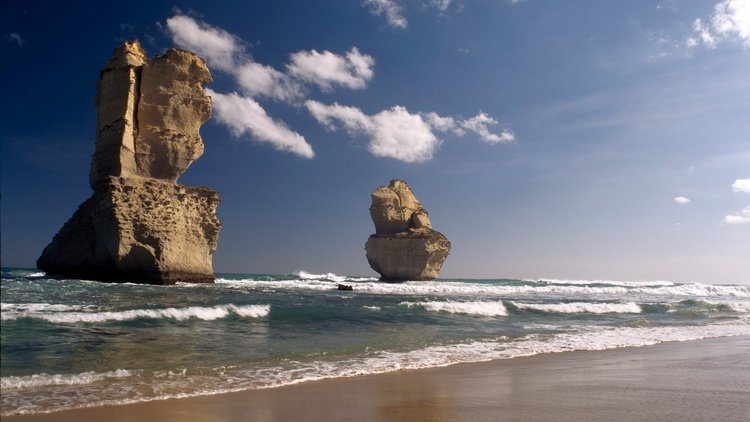 This beach is separated from the apostles by a small promontory, which cannot yet be bypassed.

The Twelve Apostles in Australia 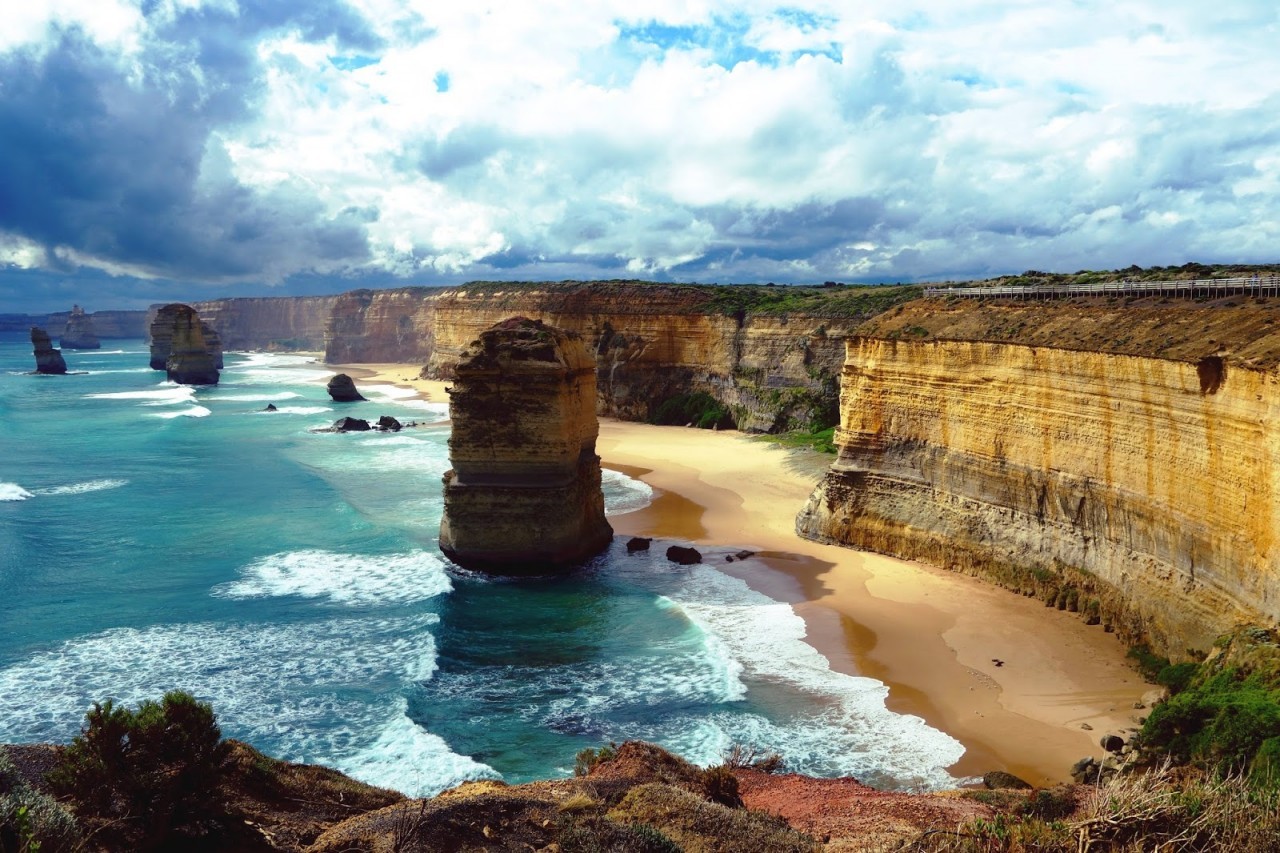 If you’ve just heard about the beauty of a landmark in Australia like the Twelve Apostles, you should learn more about it. This natural formation has truly earned its popularity among tourists because of its magical atmosphere and beauty. It is not only a symbol of the state, but also one of the most popular places in all of Australia. You can see a stunning view of the sea and the cliffs, what is amazing is these small hills around which rise up, they stand one after the other and have a height of about 45 meters. With us, such places immediately get their own legend or history. But in the case of Australia, the only controversy was over the name, which should have defined the whole pathos of the place.

You can easily visit it if you want, there is a very convenient hiking route, and it will be very easy to reach both on your own and with a tour. In addition to looking at the 12 apostles from the edge of the cliff, which offers an equally great view, the most sophisticated can fly around the cliffs in a helicopter, this trip is also very popular. If you are brave enough and ready for this mind boggling experience, then flying over the apostles will give you an incredible experience. 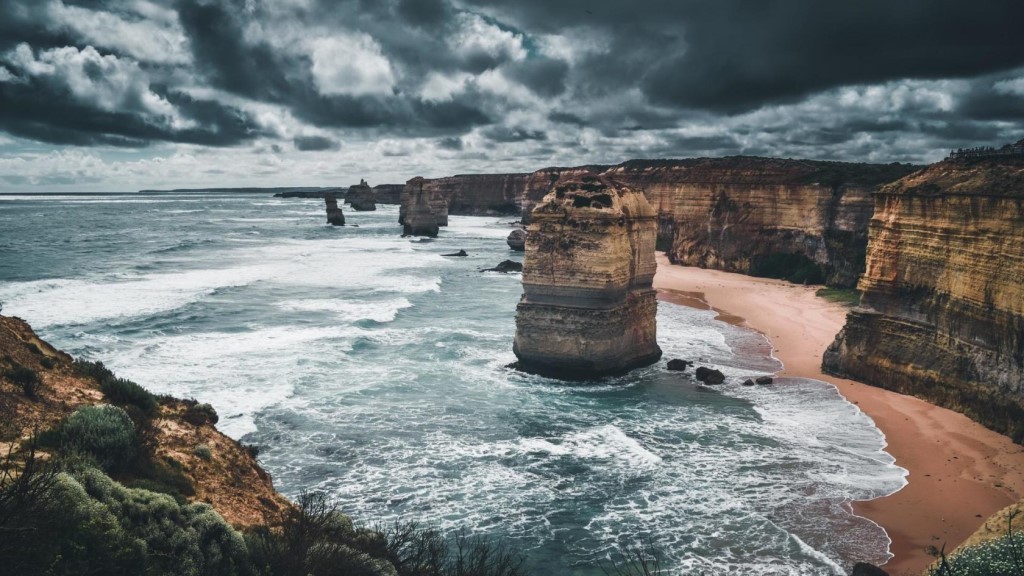 This interesting picture opens up on a magnificent oceanfront, formerly nine cliffs formed here right in the middle of the water. The limestone cliffs look very beautiful and have their own individuality expressed in the peculiar shape they have acquired over the years. Unfortunately, it’s the immersion in the water that makes them not the most stable. You can give such a place any story coloring you want, as it looks like a scene from a movie. When you stand and see such beauty with your own eyes it is hard to believe in its reality.

What is amazing is the emotions you can get, looking at these rocks at different times of day, they say that the cliff looks especially beautiful at sunset, as the receding golden sun envelops all around with warmth. Be sure to see it with your own eyes and experience it, perhaps, you will be comprehended here a different feeling.

This place has a little history due to the fact that although it is a natural formation of limestone, people somehow had to mark it. At first, the name of the place was not so catchy, which caused a lot of doubts especially when the rocks began to gain popularity. The rocks were named as a pig and piglets, it is clear that such a thing could not be a symbol, whether because of the simplicity or the complexity of understanding for tourists, but gave a new name. In the twentieth century, the rocks were named 12 Apostles, and now it has a rather catchy name, which is enough to arouse interest and ennoble the attraction. 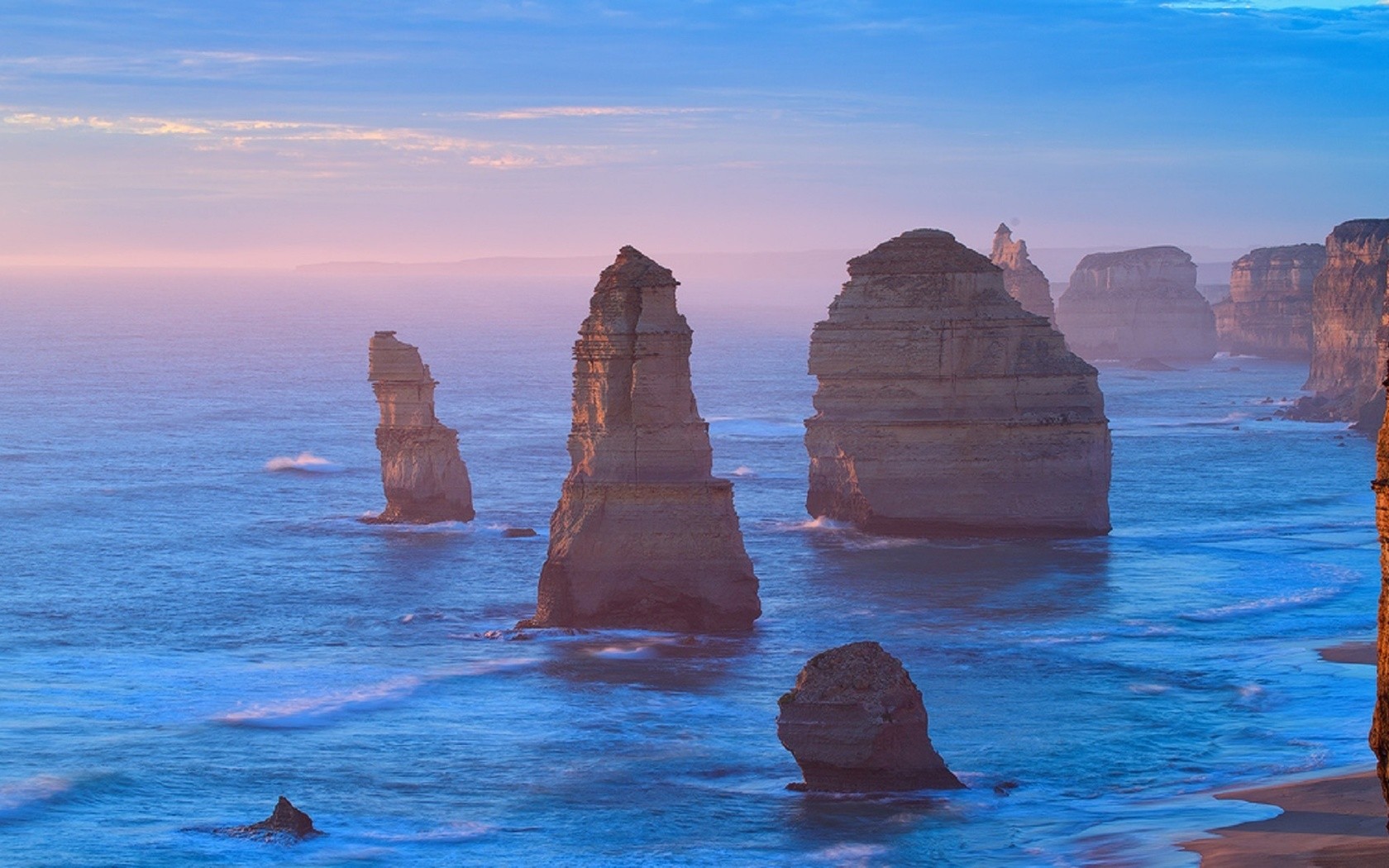 That’s just what this name is associated with it is hard to guess, especially when you stand there and count only 9 rocks. Don’t be surprised, that’s how many there were originally. The sad fact is that in 2005 there were even fewer of them, one of them collapsed, and now there are only eight. But the natural beauty of this does not violate, and the place is still delightful and striking. The fall of the rock is not related to disasters or catastrophes, it just could not withstand the erosion, which is also a completely natural process, as the rocks are submerged in water. It happened right in front of the tourists, but such an action was fully expected, there is speculation that soon such a fate befell the other rocks of this coast.