Kamchatka Geysers is a deep canyon with numerous lakes, waterfalls, hot and thermal springs. In the valley you can observe the splendor and richness of nature, see boiling fountains and a lot of steam.

In this place there is a contrast of climate and diversity of nature. This area has a protected status and is constantly monitored.

The Valley of Geysers in Kamchatka is one of the seven wonders of Russia.

After the rains in 2007 a dam was formed here. The power of rain has revived this natural monument. The water has gone, and the geysers started flowing again. According to experts, there are much more of them now.

The largest geyser in the valley is the “Giant” which erupts once in 8-10 hours.

There are about 20 big and many small geysers in the valley of geysers which are impossible to count.

The most famous geysers in the area are: “Pearl”, “Malachite Grotto” and “Fountain”.

I should also mention the climate of this place. It is quite formidable and harsh.

Winters here are characterized by abundant snow. The temperature in winter is -24 to -26. Summer is rainy, the temperature reaches +12 +14 degrees.

93% of the flora is represented by stone-birch forests, various types of meadows, and 7% is an imported weed. There are 8 rare plants growing in this area. Many different species of birds can also be observed here. The only plant that grows on hard ground is wormwood.

Kamchatka Valley of Geysers is not safe at all, as there is a lot of boiling water and steam. Hot water flows not only in geysers – even under the grass you can come across the hot stream.

The Valley of Geysers is of great interest to tourists. Since 1992 there have been organized numerous excursions in the valley, including helicopter tours. This part of Russia is so called tourist Kamchatka. Time in the Valley of Geysers is limited to 1 hour. Also there are strict rules of conduct: you can walk only with a guide on special trails and can not litter. Coming near hot springs is forbidden.

The Valley of Geysers in Kamchatka is a natural monument and is included in the UNESCO World Heritage List.

Where is the Valley of Geysers in Kamchatka 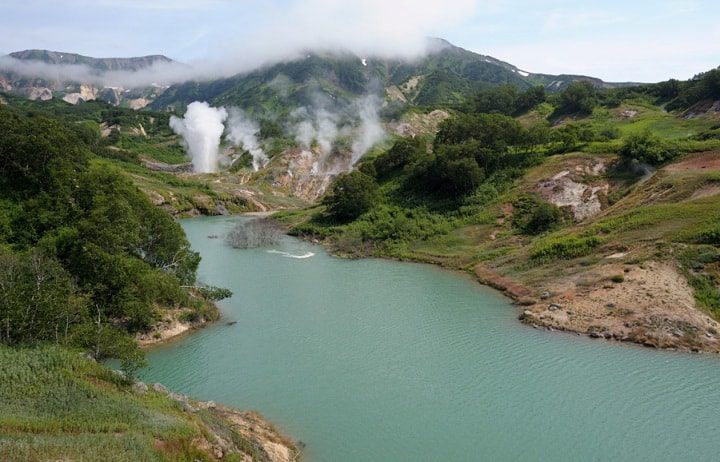 The location of the Valley of Geysers is very simple. It is located on the Geyser River in the Kronovsky State Biosphere Reserve.

The area of geysers is relatively small – only 6 sq km. There are 3 groups of thermal springs:

Also on the peninsula there are interesting rocks, named after the god Kutkh Kutkhin baths. 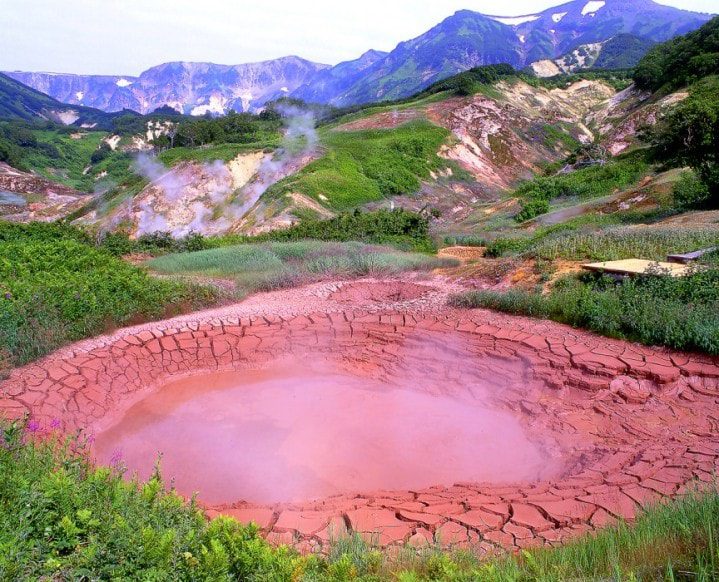 History of the discovery of the Valley of Geysers

It was discovered relatively recently – in 1941, a geologist Tatiana Ustinova and guide Anisifor Krupenin discovered it during an expedition in search of water, which flows from the Uzon Volcano Caldera (1617 meters). The Valley of Geysers in Kamchatka was discovered in a very spectacular way – during a snack in the surrounding snow, a stream of boiling water hit them from a snowdrift. The first geyser was symbolically named “Pervenets”. 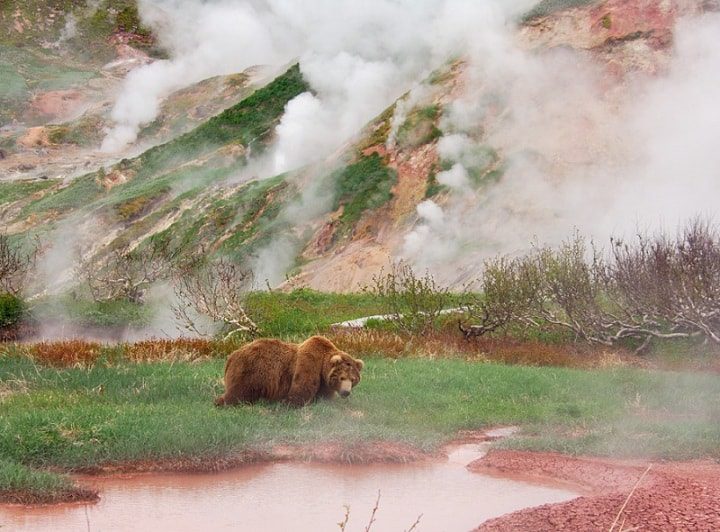 Now there are 20 geysers in the valley with their own names. Their frequency of eruptions varies from 10 minutes to 10 hours. The largest geyser is the “Giant”.

The valley itself looks unusually green in the volcanic area – grass and trees make a vivid contrast to the Dead Forest of Kamchatka. And not far from the Valley of Geysers there is another, less beautiful, but also wonderful Valley of Death, which smells a lot of hydrogen sulfide and is the headwaters of Geyser River. 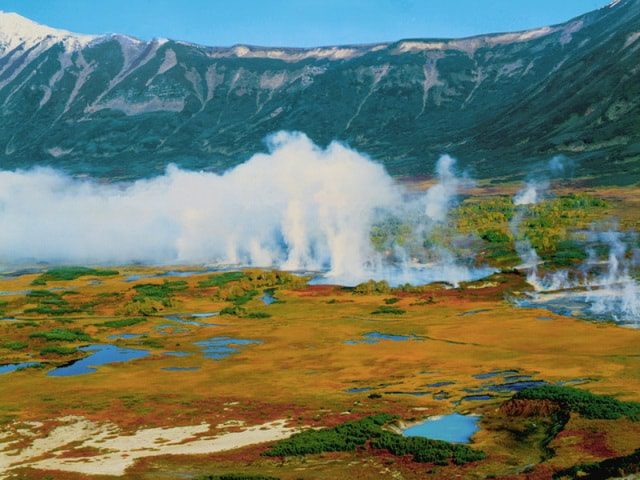 Since 2008 Kamchatka’s Valley of Geysers has been included in the list of 7 Wonders of Russia, which also includes Peterhof, Lake Baikal, St. Basil’s Cathedral, Mamaev Kurgan, Mount Elbrus and the Weathered Columns.

The first serious disaster happened in 1981, when Typhoon Elsa brought rains that covered the valley with water and boulders. Many geysers stopped working or were badly damaged. That’s how the Big Stove Spring went out.

In 2007, however, the valley was temporarily extinguished as a landslide covered them with a thick layer of rocks. They blocked vapor and water outlets, forming Geyser Lake. This continued until 2013, when heavy rains caused a new landslide, destroying the resulting dam, but the lake remained. However, 2/3 of the valley is still filled with its remains. It is believed that there are even more springs after 2013.

If you want to see something unusual and amazing, then you should definitely go on a trip to Kamchatka.

Usually excursions to the valley are made by helicopter, and unauthorized tourism has been prohibited here since Soviet times. When walking around the geysers, you should be careful, otherwise you may step on a green meadow, under which there is a red-hot slurry up to a meter deep.

Besides Kamchatka there are geyser fields in Chile, Iceland, USA and New Zealand. And on Wonders of the World website you can read about other famous geysers: Fly and Yellowstone geysers located in North America.