The Verzasca is the clearest river in the world with crystal-blue water and colorful stones, which dot its bottom. The river flows through the valley of the same name in the Swiss canton of Ticino. The length is 30 km. The beginning of the river is high in the mountains, on a peak of 2,864 meters. The Verzasca flows through picturesque valleys to the south, where it then flows into a mountainous lake in Maggiore, located between Italy and Switzerland.

Video: Diving in the Verzasca River

What makes the Verzasca River even more beautiful is that all the way from its source to the confluence with the lake, the river is surrounded by lush Mediterranean vegetation. Thus, tourists, diving enthusiasts and lovers of true natural beauty come from all over the world to admire the clear waters of the river, surrounded by vineyards and forests.

Currently, the Verzasca River, located in the central region of the Swiss Alps, deservedly belongs to the most beautiful rivers of Europe. The temperature of its cleanest waters is quite low: usually even in the hottest heat it does not exceed 10 degrees. The depth of the mountain river is relatively small – up to 10 meters. At the same time in Verzaske, there are places that are quite dangerous because of the rough undercurrents.

Bathing in the river is prohibited: the water is very cold. However, despite this ban, there are always brave people who wish to dip into the clear but mercilessly icy waters of Verzaska. And, since because of this there have already been situations with unfortunate outcomes on the river, today there are local “overseers” who warn people about the dangers, and direct them to relatively safe places on the river for swimming.

But, to be fair, it should be said that these are not just safe places on the Verzasca, but natural baths that the river has washed out in the rocks, making its way through them over the years. It is in such “reservoirs” that the water becomes suitable for bathing, and in the summer period it is a favorite place for a large number of vacationers.

River Verzaska is not very deep, the maximum depth is about 15 meters, but because of its clear water attracts like a magnet divers who make from the depths of stunning pictures. But you need to be well prepared for this, as do not forget that here is a very cold water. From the bottom of the lake well see not only the underwater world, but even that is above the surface of the water, such as connecting the banks of the river two-arch Roman bridge of the beginning of the XVII century and the people strolling across it.

It would seem that the water is so clean and beautiful that it should be a paradise for fish, but for some unknown reason there are none. There have been speculated that this is due to the acidity of the river, but a study conducted in 2009 did not confirm this assumption, and the level of acidity in the Verzasca River is no different from most other rivers, so it is still a mystery.

A famous attraction of the Verzasca River is the Verzasca Dam, which was built in 1959, its height reaches 220 meters, the dam was built in order to limit the amount of water flowing into Lake Maggiore. It became famous after it jumped off the “007 agent” – James Bond (Pierce Brosnan), it filmed a scene for a part of the movie, namely, “GoldenEye. Today, a similar jump can repeat any “daredevil”, since there is a site for bungee jumping and after such a jump memories for life are guaranteed!

Another attraction of this area is the Roman Bridge. It is a double stone bridge, which is built in the form of an arch. Walking across it allows you to see Verzasca from a different perspective and fall even more in love with its ornate curves, fantastic purity and unique color of the water. The cleanest river in the world, the Verzasca makes you admire itself over and over again to no end!

In the valley of Verzaska river you can see a village where many houses are built of laminated stone – gneiss, many houses here are more than 400 years old. But once a huge snow avalanche fell on this village from the alpine mountains and buried it completely. To commemorate this tragic event there is a red marker on the high church of the village where the snow used to lie.

The best place to admire the beauty of the Verzasca River is near Locarno (where the river flows into Lake Maggiore). The nearest international airport is located in Zurich.

Then you need to take a train to Locarno, travel time is about 3 hours.

Also, the city of Locarno is connected by train to cities such as Basel, Lucerne, as well as Milan in Italy.

If you decide to get to Lornaco by car, you need to stick to the highway A2. After Magadino airport you have to take the A13. After the tunnel, the first exit will take you to the city center.

The Verzasca is the most transparent river in the world. Switzerland

The Wersaska is the cleanest river in Europe and in the world. Its crystal clear waters run down from a height of slightly less than 3 kilometers from the mountain Pizzo Barone, run through the valley with the same name as the river Verzasca and rush into the mountain lake Maggiore. 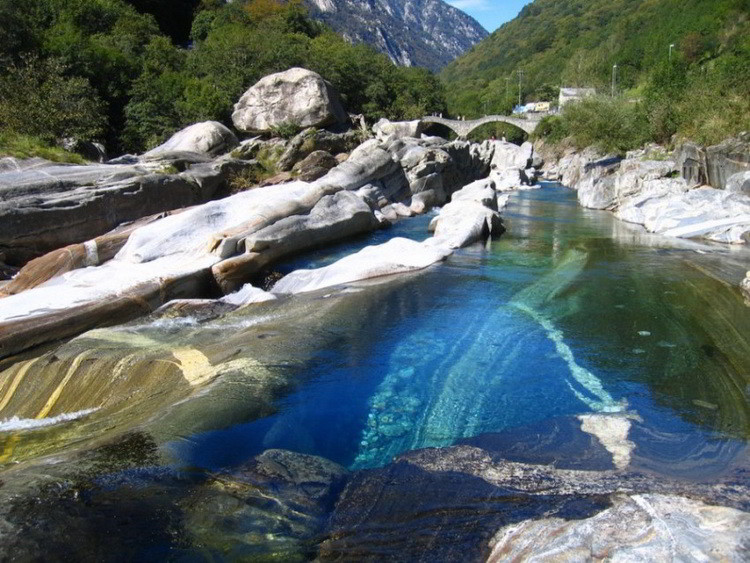 Wherever man does not interfere with nature, it works amazing miracles, giving us, time after time, a myriad of world sights.

Our planet has always been, is and (I hope) will be the greatest value of mankind. It boggles my mind to imagine how many beautiful places there are on Earth, and how beautiful they are. Rivers are one of the main natural attractions of any country.

In Switzerland, as you know, there is already a mysterious underground lake Saint-Léonard with crystal clear water. But there is also a river in this country, the waters of which are so clear and pure that it seems as if the water is purged through giant filters and various purification facilities. But in this case, nature itself acts as a purifier.

The river is called Verzaska. It flows in the valley of the same name in the Swiss canton of Ticino (Italian-speaking part of the country).

The Verzasca River on the map

The Verzasca River begins at 2864 meters above sea level, on Mount Pizo Barone. There, small streams gather in a strong and cold stream of water, and begin their 30 kilometers run to Lake Maggiore. As you understood the length of the river is short – only 30 kilometers, but this distance is filled with enchanting beauty and charm.

The water in the river looks so clean that you could take it as a benchmark in the House of Weights and Measures. You could even put it on the same shelf as the benchmark of white sand from Hyams Beach, Australia.

The Verzasca River in numbers

Of course, the benchmark transparency has not gone unnoticed. Tourists from all over the world try to see this miracle of nature. And some even bathe in it, despite the bans. The thing is that Verzaska is quite dangerous river – its strong undercurrents can easily draw an unprepared person. And the water temperature at any time of year is not higher than +10. Therefore, it is forbidden to swim in it, and in the most dangerous places you can meet people warning hapless divers and directing them to places where bathing is allowed. And there are such places on the Verzaska River. Water over the years has washed into the banks of the natural baths, in which it is quite comfortable to swim. 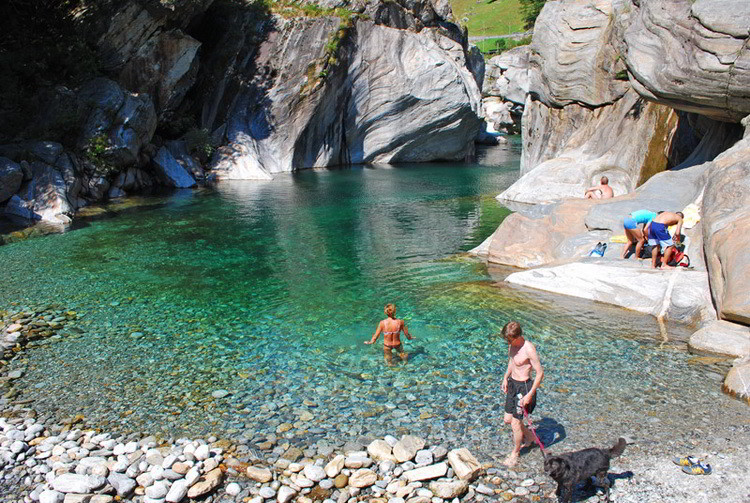 Diving enthusiasts will appreciate the Verzaska River. And if you are one of those lovers, then immediately after the Blue Hole of Belize head here. An unforgettable experience is guaranteed. Especially if you arm yourself with a good camera, you can take such photos that will seem simply unreal. 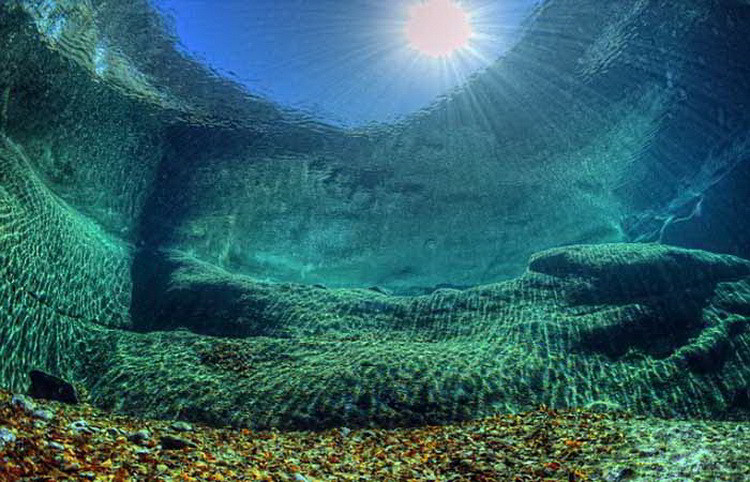 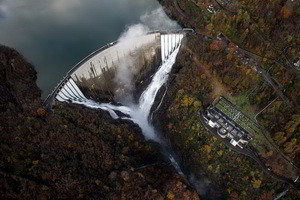 Nature is so keen on cleanliness that it even forgot to inhabit the Verzasca River with living organisms. Scientists still cannot explain the absence of life in the waters of the river, although no factors prevent it. So another riddle of the Greatest and Unpredictable Trickster (guess who it is?).

Other attractions in Verzasca

Except of crystal clear water there are some other sights in Verzasca.

Firstly the Versasca Dam, built in 1959 to limit the flow of water into Lake Maggiore. This is a paradise for those who like to tickle their nerves and those around them, because this dam is one of the “magnets” for bungee jumpers (lovers of jumping from high structures). The height of the dam reaches 220 meters. By the way, the scene with the jump of the legendary agent 007 in the movie “GoldenEye” was shot exactly here. This jump was also recognized as the best stunt in the movie.

Secondly, the attractions of Verzasca include the Roman Bridge, connecting the banks of the river. It was built in the early 17th century. This two-arch bridge is clearly visible even from the bottom of the river. And directly from it you can enjoy the beautiful surrounding views.

In any case, and from any side and depth, contemplating the boundless perfection of the landscape will not leave you indifferent.