Museum of Clocks and Watches in Vienna

You can look at clocks for a long time. In the Museum of Clocks, there are clocks of all times and peoples! There are thousands of them! From huge floor clocks to pocket watches. This is history, era and fashion! Very strong impressions! 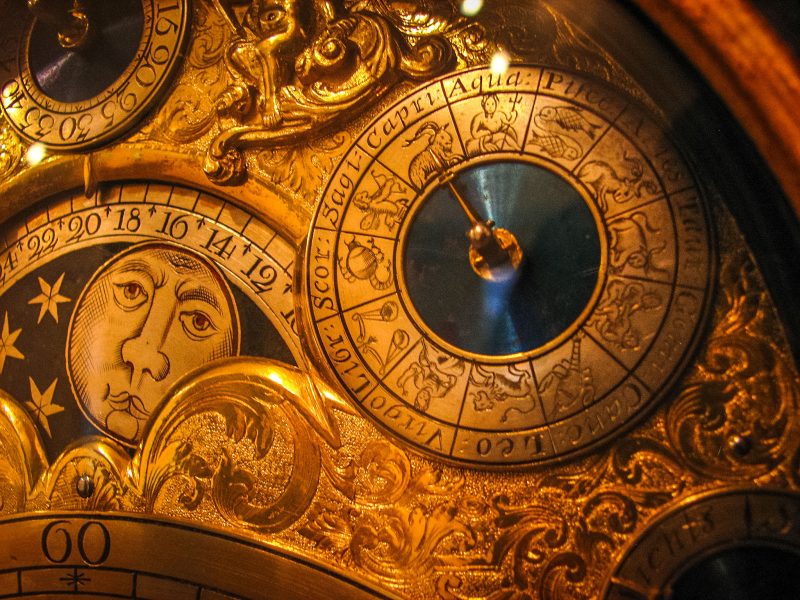 One of the attractions of Vienna, which undoubtedly deserves the attention of tourists is the Clock Museum (Uhrenmuseum). The first expositions of this ticking museum opened in 1921. On the three floors of one of the oldest houses of the Austrian capital – Palais Obizzi, are presented thousands of exhibits dating from XIV to XX century. These are the simplest clocks and turrets, mantel, wall and floor clocks, as well as pocket clocks of different ages, clocks in statuettes, paintings, vases, toys, jewelry, breast clocks, sundials, with a cuckoo, with a pendulum.

It all began in the private collections of the high school teacher and first director of the Museum, Rudolf Kaftan, and the baroness writer Maria von Eschenbach. In all the variety of clocks and watch movements in the museum, it is clear to see how the technology of their manufacture has changed and evolved. 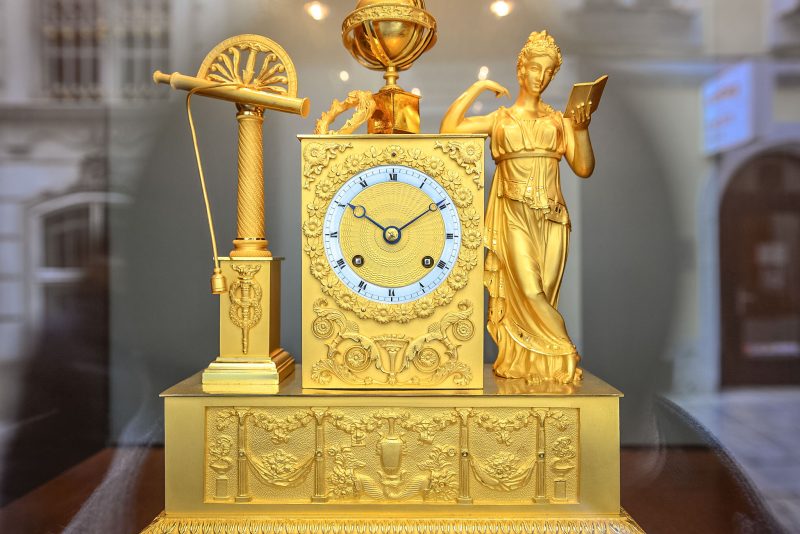 Some of the exhibits in the museum have a special meaning. One example is the astronomical clock Cajetano, made in 1769, which not only tells the time but also determines the length of the day and the orbital position of the planets with sensational accuracy. The floor astronomical clock of Joachim Oberkircher is another interesting example. He also worked on the clock mechanism of the Stefansdom tower clock (1699). 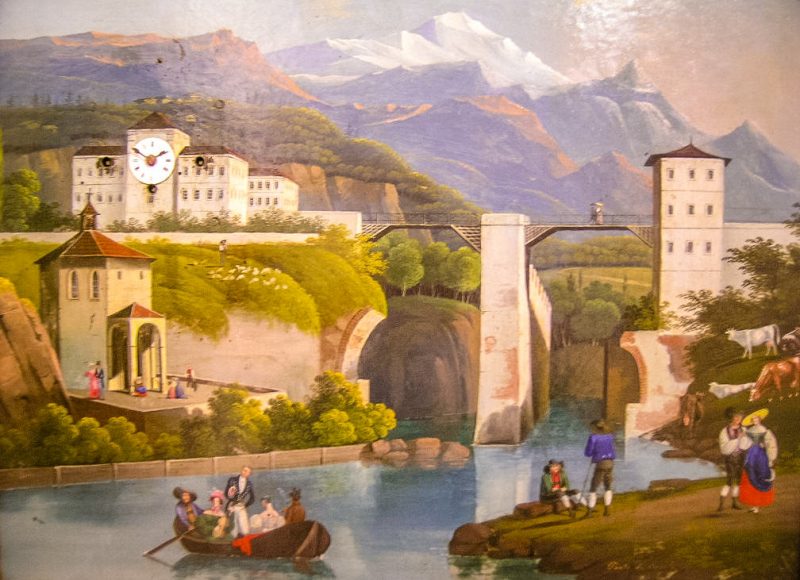 The clock in the painting, photo by rennbeetle

Particularly noteworthy is the collection of pocket clocks owned by the Austrian author Baroness Maria Ebner, the early 15th-century tower clock and the blue porcelain floor clock from the villa of the actress Katharina Schratt in Bad Ischl. The interesting thing is that many of the exhibits in the Austrian Clock Museum are still “walking”.

Pocket watches from renowned watchmakers such as the Geneva-based Bordier and the Paris-based Berthoud and Breguet & Sons are on display on the third floor of the museum. 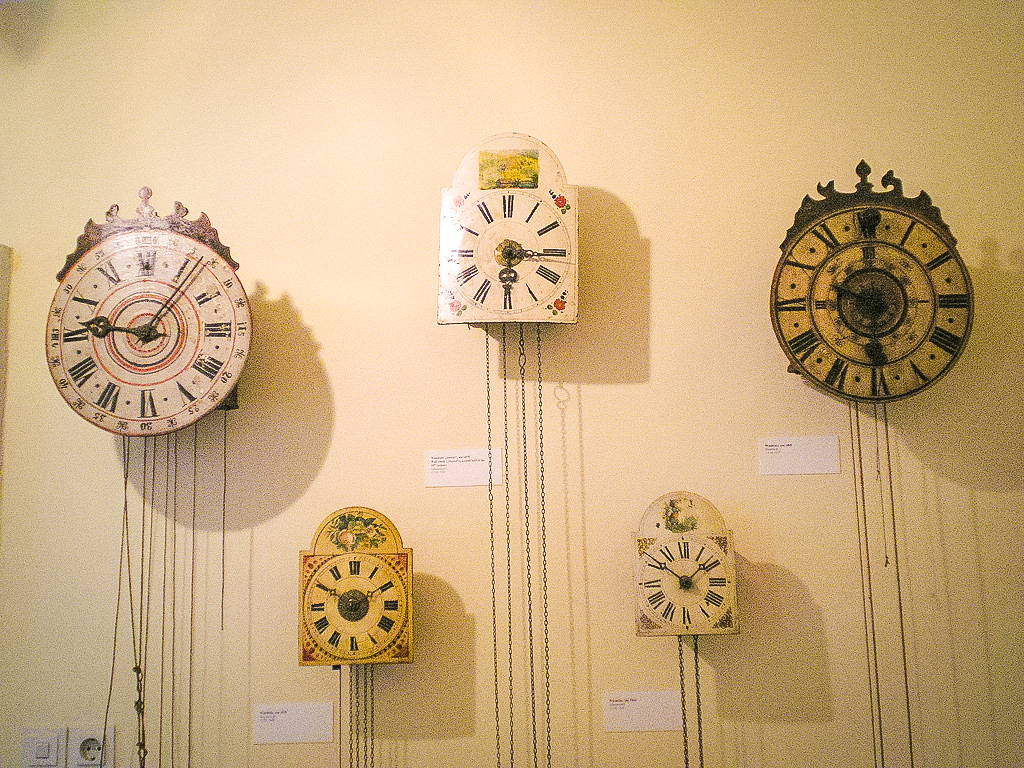 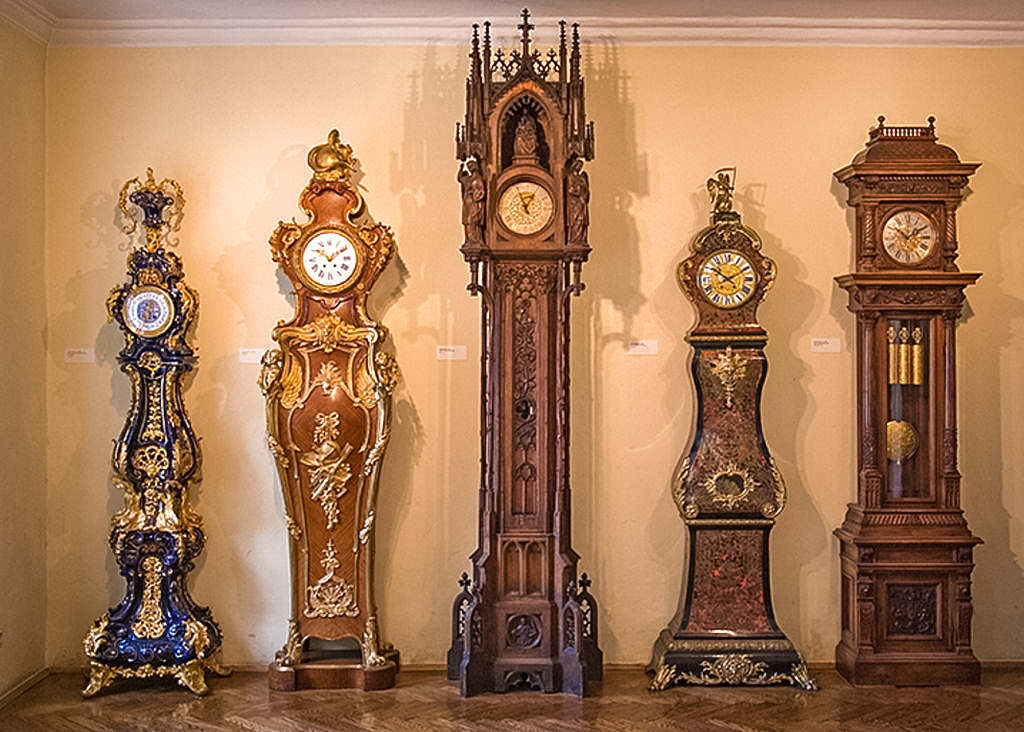 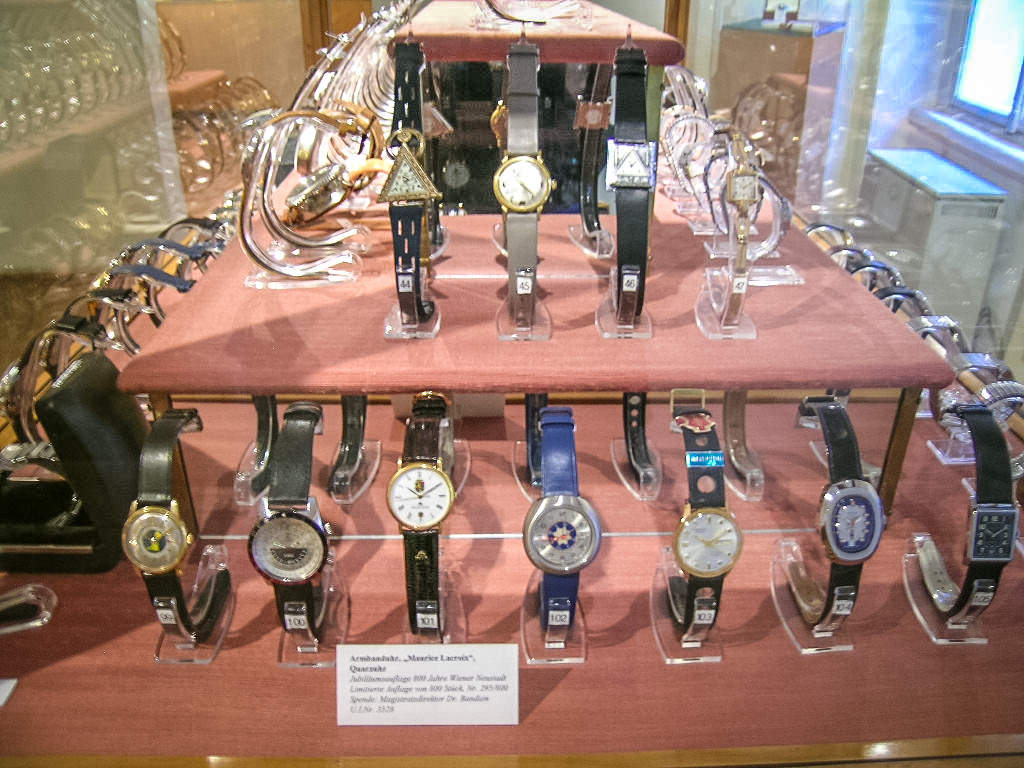 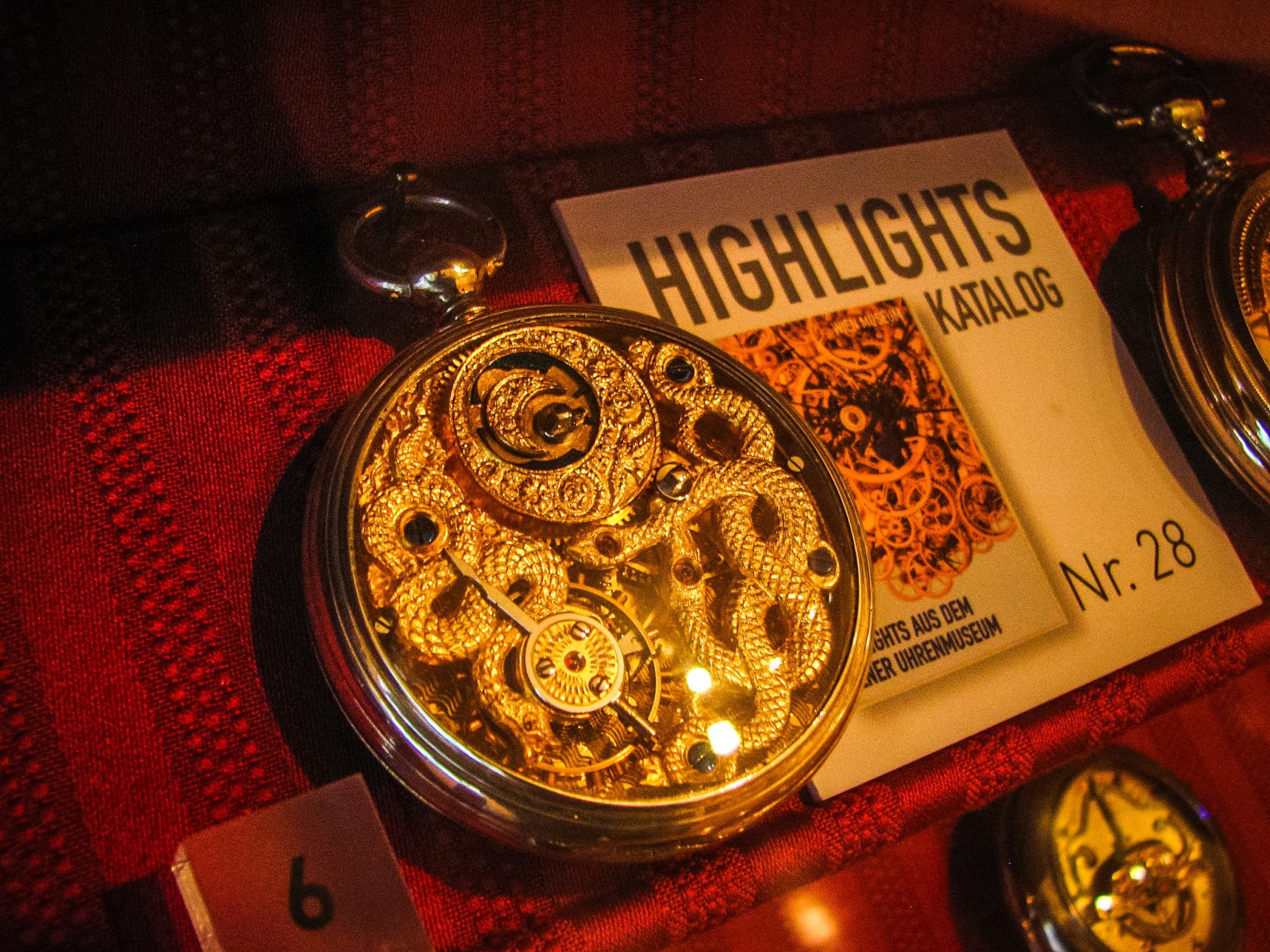 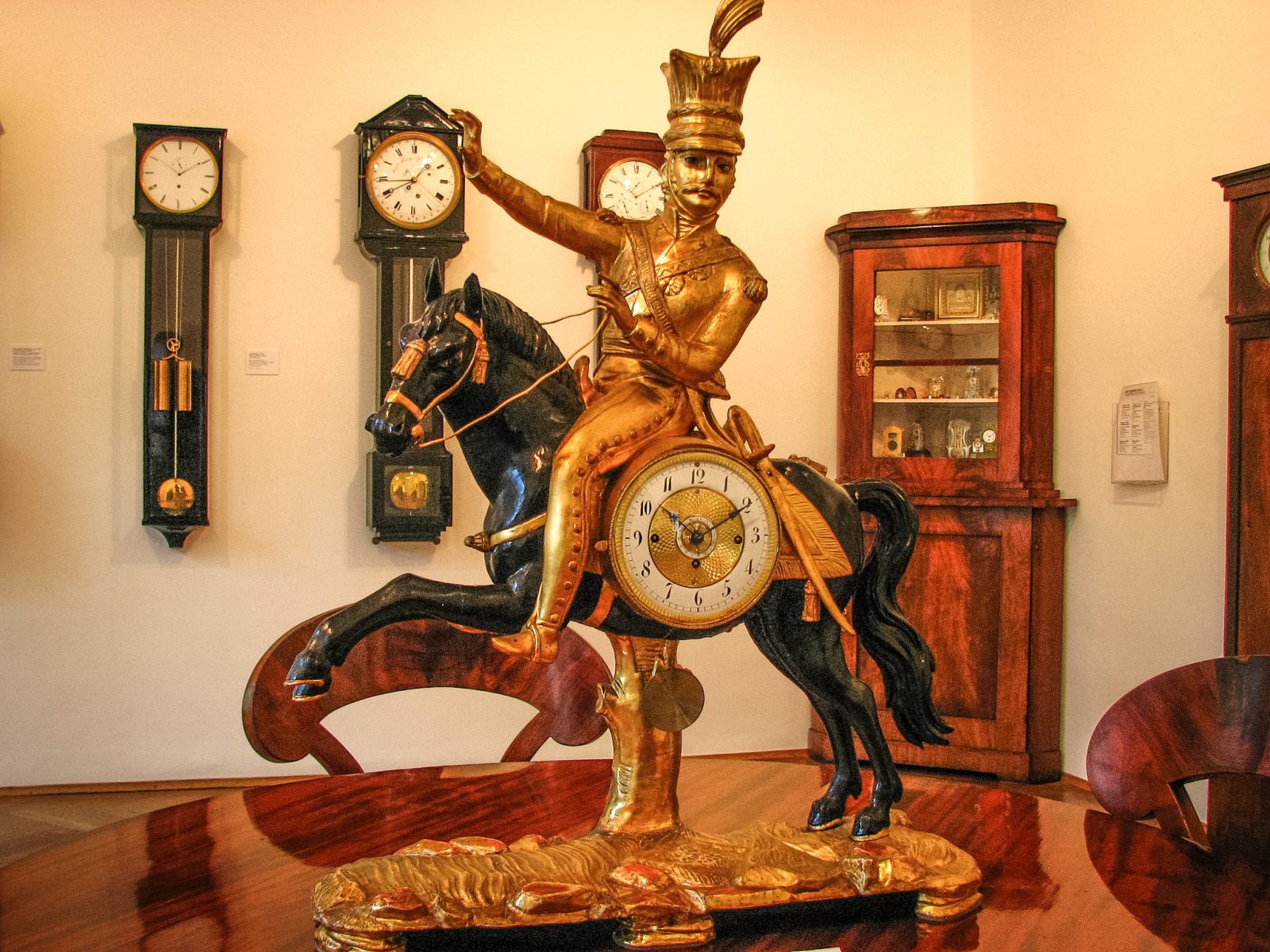 Opening hours of the Museum of Clocks

Full price €7; for elderly, disabled and students up to 27 years old with Vienna Card €5; free of charge for children and teenagers up to 19 years old.

Every first Sunday of the month admission is free for all visitors!

Take the U3 metro to Herrengasse station. 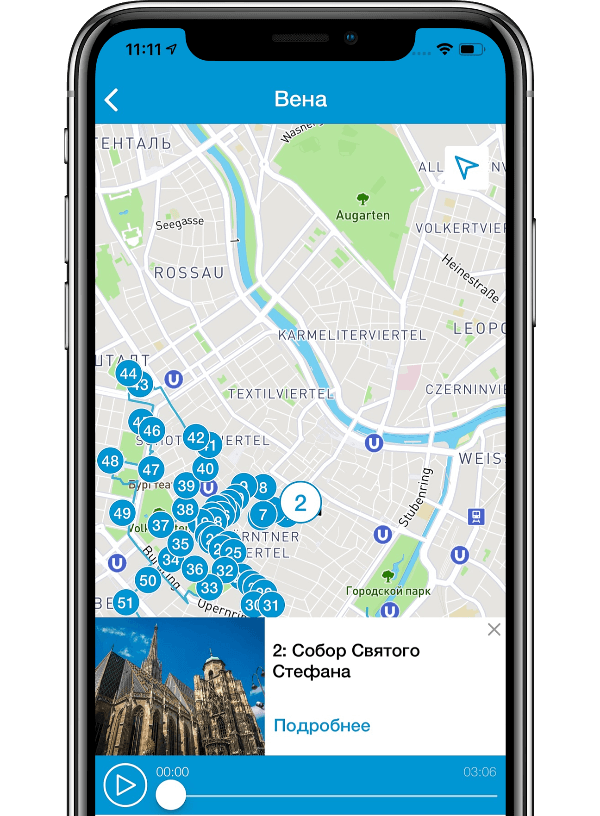 This is a ready-made audio tour of the historic center of Austria’s capital, which will help you get the most out of the city and save significantly on guide services. The audio tour consists of 57 sites on the most popular walking route, covering all the major attractions of Vienna. 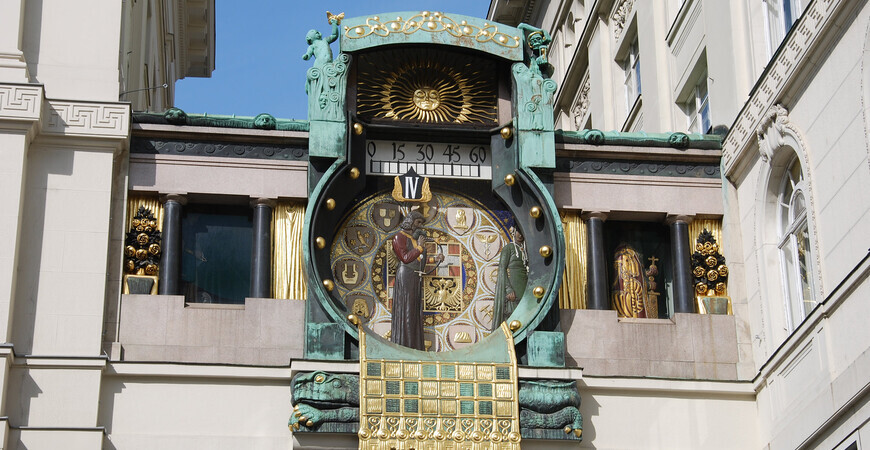 City clocks, clock towers are an obligatory element of the architectural landscape in the historical districts of European cities. Guides always take tourists to them, because the city clock is usually not only an interesting object and a work of art, but also a symbol of the flow of time, next to which you feel the unity of historical eras, traces of which surround you. Anchorwatch serves as such a bridge between Vienna’s past and present. And the bridge is not only in the historical sense, but also in reality. The case of the clock is located on the gallery, which is the bridge that connects the two buildings of the Anker Insurance Company.

Anker means “anchor,” hence the name of the clock. It has nothing to do with ships or the sea. At the beginning of the ⅩⅩ century, the Vienna insurance company Anker chose the watch as its symbol. It was meant to symbolize the transience of life, thereby encouraging customers to purchase insurance products. The insurers commissioned the clock from the Austrian sculptor and artist Franz von Machu, known for his murals on the walls and ceilings of many public buildings in Vienna.

The insurance company building with the clock was located on the Hoher Markt – Upper Market shopping plaza. This name has survived to this day. The clock on the market square, which adorned the building of a respectable insurance company, was supposed to serve not only as a decoration, but also to amuse and surprise the public. Franz von Machu certainly succeeded. The clock shows the time without a dial, it plays music and moves alternating characters.

You can see the clock at any time you like free of charge, but the musical entertainment is only available at 12 noon.

The architectural style of the Ankeruhr clocks

The Ankeruhr clocks are a unique example of the Art Nouveau style, which reigned in Europe at the turn of the Ⅹ-ⅩⅩ centuries. The Art Nouveau style is characterized by abandoning the strict lines of classicism and using metal, glass, mosaic panels, tiles, forging and lavish ornamentation.

How the clocks are set up

The gallery that connects the two buildings contains many symbolic details, an elaborate design. The anchor clock has no hands and the usual dial, marked with graduations. The circle itself does exist, but it carries allegorical images and emblems rather than numerals. The sun with glittering rays, a symbol of life, is depicted on the portico that crowns the composition. To his left is a figure of a child with a butterfly and to his right is death with an hourglass. Underneath them is an accentuatedly concise linear scale. All together symbolize the transience of human life. The central part of the clock rests on a bas-relief with the figure of a lying dragon, a symbol of the otherworldly afterlife. The dragon is surmounted by an Art Nouveau rug. To the right and left are golden draperies and columns reminiscent of the framing of a theater scene. The characters of the Anchorwatch who move or, as they say, “dance” appear and disappear within them. The circular mosaic background in the background is made of metal, marble and glass.

The figures counting down the time on the clock were not chosen by chance. All of them played an important role in the fate of Vienna. With the appearance of each figure, music corresponding to the historical plot is played. Above the head of the character is a Roman numeral and a small triangular hand. They indicate the time: the Roman numeral is the hours, and the movement of the hand on the scale is the minutes. Each of the twelve figures (some of them paired) moves under the scale with the minutes for one hour, then it is replaced by the next. They are all made of copper and have a height of 2.7 meters.

Once a day, exactly at noon, there is a musical performance of all the characters. In the course of a 15-minute parade the spectators are shown a succession of historical periods of Austria.

The first character is the Roman Emperor Marcus Aurelius, under whom Vienna was founded. The “Ode to Victory” is played.

The second character is Emperor Charlemagne, the creator of Austrian statehood, to the tune of “Hildebrandlied”.

The third is a couple – Duke Leopold the Glorious, one of the most educated rulers of his time in Europe, and his wife Theodora Angelina of Byzantium to “Song of the Nibelungs”.

The next hour is by Walter von Vogelweide, a famous poet and founder of one of the Minnesinger school of poetry. He is accompanied by the song “Kreuzfahrerlied.”

Behind him appear a pair of figures – the founder of the Austrian throne, King Rudolf Ⅰ of Habsburg, and his wife Gertrud von Hohenberg to the song “Lied eines Minnesängers”.

The song “Es liegt ein Schloss in Österreich” – “This Castle in Austria” – accompanies Hans Puchbaum, the creator of St. Stephen’s Cathedral (Stephansdom), the national symbol of Catholic Austria. The next figure is Emperor-Reformer Maximilian Ⅰ and the song “Innsbruck, ich muss dich lassen” – “Innsbruck, I must leave you”.

The illustrious Field Marshal Count Ernst Rüdiger von Staremberg is accompanied by the melody of the ⅩⅦ century march.

The song “Prinz Eugen, der edle Ritter” (Prince Eugen, the noble knight) is sung with the appearance of Prince Eugene of Savoy, the great military leader who saved Vienna from the Turks.

When the royal couple – Empress Maria Theresia and her husband Franz of Lorraine – appear, Mozart’s minuet is played.

Composer Joseph Haydn concludes the procession with his “Die Schöpfung” oratorio “The Creation of the World”.

Anchor clock on the Google panorama

The Ankeruhr clock is located in the center of old Vienna on Hoher Markt Square. it is conveniently reached by bus. First option: by buses 1A, 3A; the stop is named Hoher Markt. The second option: bus 2A to bus stop Rotenturmstrasse, then walk along the street Lichtensteg to the square.

An interactive map and timetable on the city website.