The Venice of Holland – the village of Githorn

I can imagine what they will tell me about a lot of Venice, and even more so in Holland, where there is Amsterdam. Just the other day on this occasion I had a word with a tourist whose opinion about other Venice in Holland is radical: “it’s a shame having Amsterdam…”.

But still, “you can’t take words out of my mouth” and Gitthoorn, even the Dutch themselves, call “the Venice of Holland”. Yes, Amsterdam and Bruges do not agree with this and dispute the title, but by the number of bridges and bridges per capita – more than 170 per 3000 inhabitants, Githorn is ahead, and also, the only means of communication in the historic center are canals, there are no streets at all, what can not boast neither Amsterdam nor Bruges.

In May 2014 we visited this village, but as a passing through, we liked not only the touristy Githorn, but also the surrounding countryside with numerous lakes, cozy canal towns and great bike paths. We decided that we would definitely come back and here we are.

This time the plan is for a two-day bike ride:

Visited on March 23-24, at this time there is a real spring, I wrote about it in the report The beauty of spring and a curiosity with the hotel Githorn in Goat Horn. But a spoonful of dirt was added by a stormy wind from the ocean, making it hard to breathe while driving and blowing off the track, but dispersing the clouds and not letting it rain, which usually accompanies us on our spring trips to the Netherlands. That “little thing” aside, the trip was a success.

Once upon a time peat was mined here, which led to the formation of small lakes, later connected by canals. The center of the village is located on one long canal with many branches that make up the “streets” and “alleys”, as indicated by the names of the canals (…straat – street, …weg – alley).

The village has been taken under the protection of the state and is considered a village-museum. Authentic design is carefully maintained, when instead of tiles roofs are covered with reed sheaves in the old style. Houses do not look alike and look nice under the reed roofs, with emerald lawns, geraniums, hydrangeas, azaleas, colorful rhododendrons, everything looks fabulously beautiful.

The restaurant, silent in the morning, glowed with lights in the evening and was filled with tourists (next slide photo).

The main feature of the historic village center is the complete absence of roads, which have been replaced by river canals. The means of transportation are boats and boats powered by electricity. Land transport is only a bicycle, but in the tourist season and this mode of transport is forbidden through the center for the safety of the many tourists.

The water in the canals is clear and clean, and the banks are connected by charming wooden bridges, thrown over to each house to which there is a canal.

The first mention of Githorn dates back to 1225. The name of the village is still a controversial issue:

The main thing is that the village is very interesting from a tourist point of view.

The advantage of traveling in early spring – a small number of tourists, however, and they walked and drove around after 10 am, so we quietly admired the village in the morning and evening. Usually there’s pandemonium here from May, but in March, too, without the ubiquitous Chinese did not do, fortunately, they were “walking” later.

The waterfront, usually filled with ships, tourists and tables from restaurants, at this time is still empty. But after 10, the time for organized tourists begins.

Tourist ships on the canals follow the rules of water traffic, there are even traffic lights at the intersections of the canals. For locals there are no such strict rules – they can move in any direction, but at the peak of their boats rarely use. But for local youths there are no rules at all. On the way back to the hotel in the evening, we were amazed to see 16-18 year old kids sailing through the canal in the historic center on gasoline-powered motorboats. So much for silent electric boats.

There are several museums set up in the area. The most interesting of them is considered a farm-museum of folk life. Here you can see with your own eyes how the local people lived a few centuries ago, visit all the rooms and cellars, learn how they extracted peat and fished, ran a household.

The village of Giethoorn – the Dutch Venice

Anyone going to Githorn should leave the car at the entrance to the village and then go by boat or on foot. Usually bicycles or silent boats with an electric motor are used here.

Interesting fact – These boats are often called “whisper boats”, of course for the low engine noise. But boats with diesel and gasoline engines are forbidden here.

In fairness, we should note at once that in this small town there are still roads. And even cars can be found. Therefore, to call Githorn village without roads is not quite correct. However, some areas of the town can only be reached on foot or by boat.

READ
The Rhine Falls are the largest plain waterfall in Europe 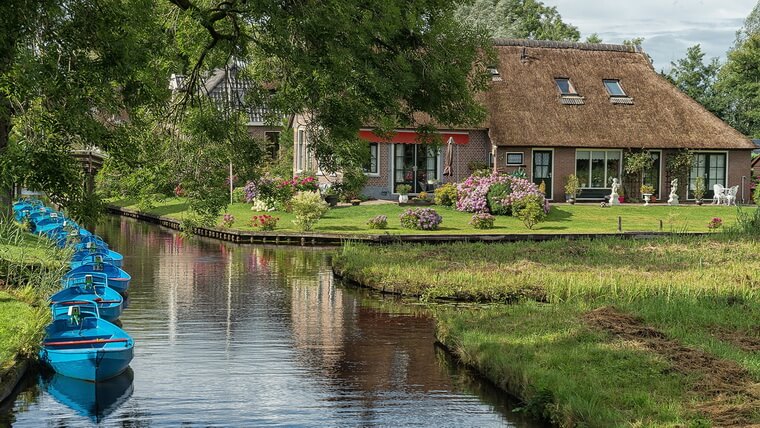 Almost every resident of Githorn has his own boat

Did you know that there is more than one “Venice” on the planet. For example, the island of Mescaltitan in Mexico is also called the Venice of Mexico. Or El Gouna, known as the Venice of Egypt. 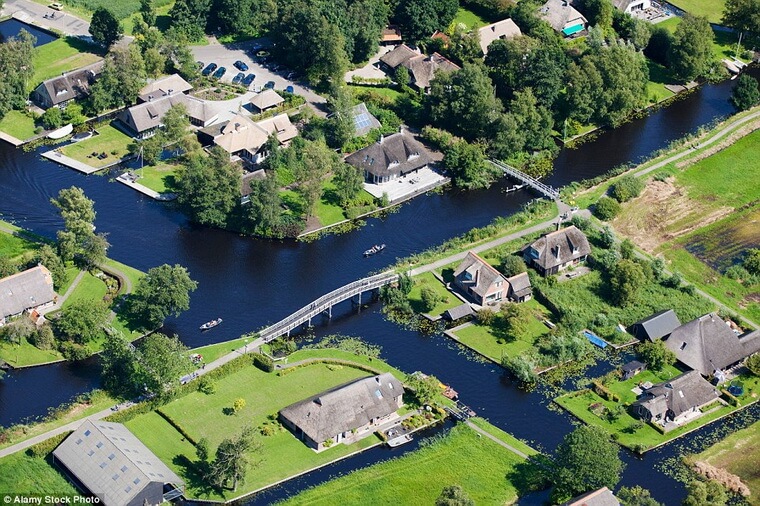 Aerial view of the Dutch Venice

You really see most of the houses here on small islands connected by bridges. And there are a lot of bridges. You can count more than 180 of them. 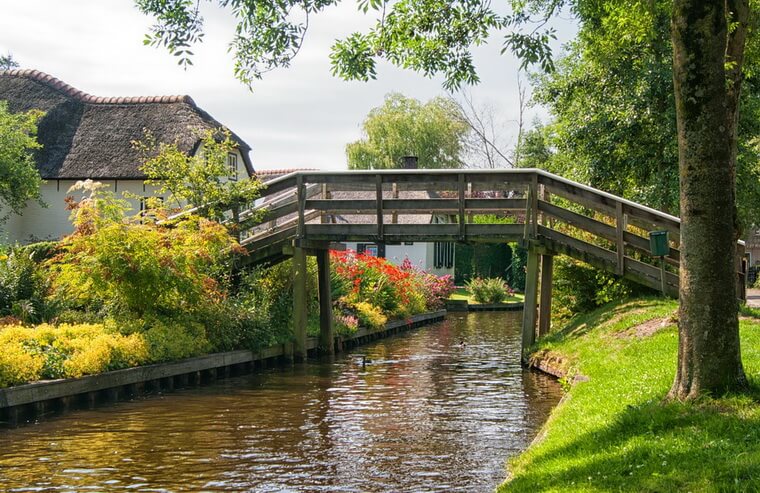 The bridges of Githorn are also a peculiar attraction.

And there are plenty of canals. Locals often use boats to get around.

In fact, the unofficial name “Venice of the Netherlands” does not really describe Githorn. You might get the false impression that it is a bustling tourist center, like Amsterdam or Venice. But this is neither Venice nor Amsterdam. It is much quieter and serene.

Interesting fact – Locals say that the village of Githorn is so calm and quiet that “the loudest sound you’ll hear is a duck quacking or other bird noises.”

Now imagine how the villagers feel when they return home by boat to their little island and enjoy the beautiful view from their living room windows. Silence. Beauty. Peacefulness. But that’s about the time when Githorn isn’t packed with tourists.

A bit of history.

Githorn was originally a settlement of peat pickers. Peat extraction created ponds and lakes, and people built houses on the islets. Eventually the only way to get to the houses was by bridge or by the traditional Githorn boats. They are called ponters. It is a narrow boat that was pushed with a long punch pole. Sort of like the Venetian gondolas.

Fortunately, not much has changed in Githorn since then. The low wooden bridges are still in place. And you can still travel on the water by pontoon, electric boat or tourist boat. 1 or 2 hour boat tours will take you under the bridges and past gorgeous 18th and 19th century farmhouses with thatched roofs. 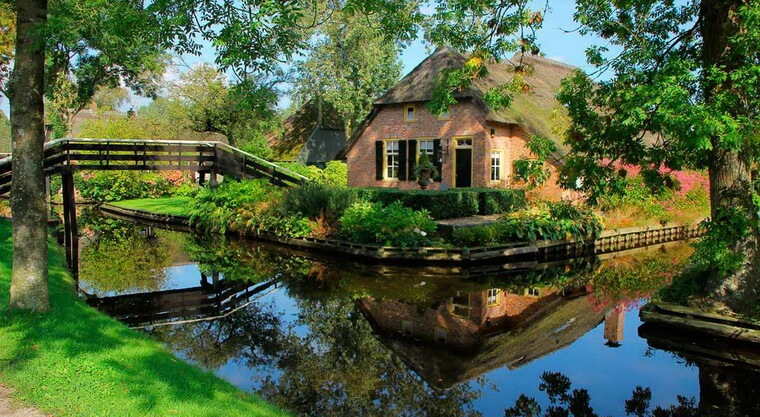 When to go to Githorn

The best time to visit is, of course, the high season. The period from mid-April to mid-October. But August has the highest number of tourists here. Keep this in mind when planning your trip.

However, do not forget about the winter. During this time, the canals of Githorn are frozen. Imagine the views that await you as you skate along the frozen canals surrounded by the classic houses of old Europe. 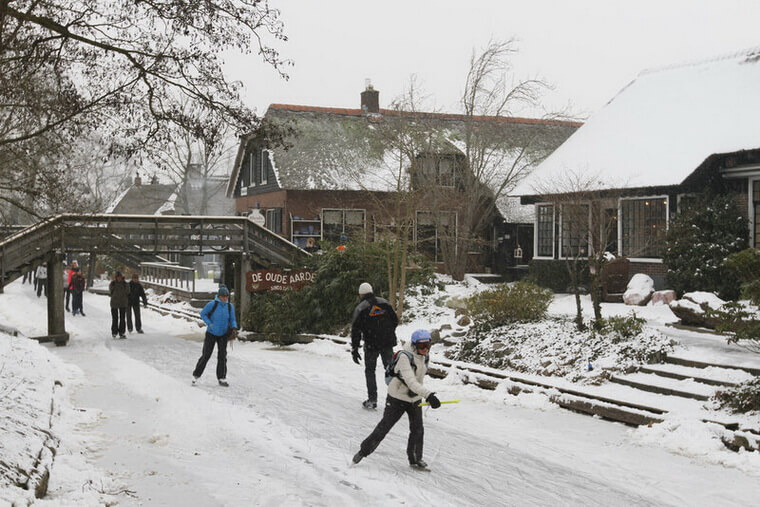 Dutch Venice in winter is also quite attractive

There are three main ways to get to Githorn.

If you own or rent a car, it takes about an hour and a half to get to Githorn from Amsterdam. There is free parking on Bartus Warnersweg, next to the shopping center PLUS Giethoorn. From there only by boat, bike or on foot.

Or you can book a tour from Amsterdam. It usually includes a transfer, an hour boat tour along the canals and some free time to walk around the town on your own.

Finally, the third way to get to Githorn is by regular public transportation. But it takes more time. Take the train from Amsterdam to Stenwijk and then the bus from Stenwijk to Githorn. The whole trip takes about 2 hours. This is the best way to go if you plan to be in Githorn for more than one day.

The proximity to Amsterdam makes Githorn a great place for a day tour. Still, it’s worth sticking around for at least 2-3 days to really appreciate all the splendor of the village.

Don’t forget to visit Githorn’s most famous cafe, The Fanfare. 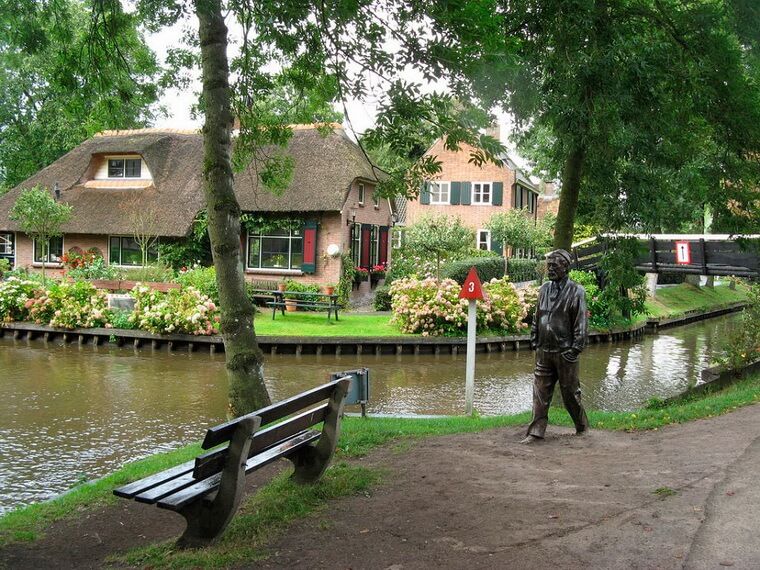 A monument to the director Bert Hanstra in Githorn. It was he who made the film “The Fanfare”, which made this restaurant famous

Visit the Museum Giethoorn t Olde Maat Uus. It will introduce you to the history of Giethoorn. It is actually a living reconstruction of a farming village with actors in traditional costumes. There is also a souvenir store and a cafe. 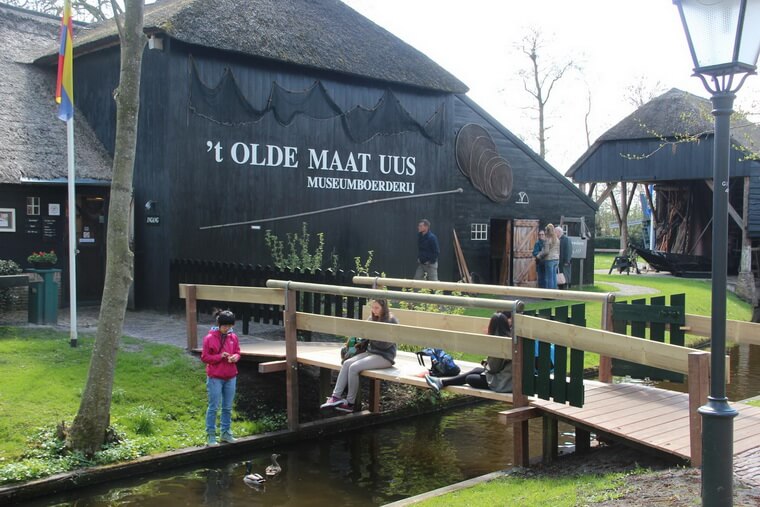 And be sure to take a tour of the canals of Githorn by boat. It’s the best way to get to know the village. 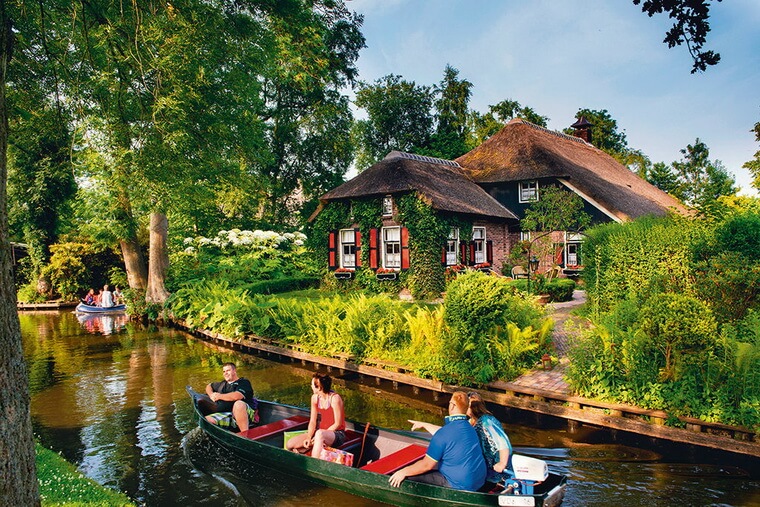 Boat rides on the canals of Githorn are the most popular attraction. Although for the locals it is a common occurrence

Interesting fact – Githorn is quite an interesting and popular attraction in the Netherlands. Especially the village attracted the Chinese. Each year, about 200,000 Chinese tourists visit the Dutch Venice. And the locals here are less than 3,000 people 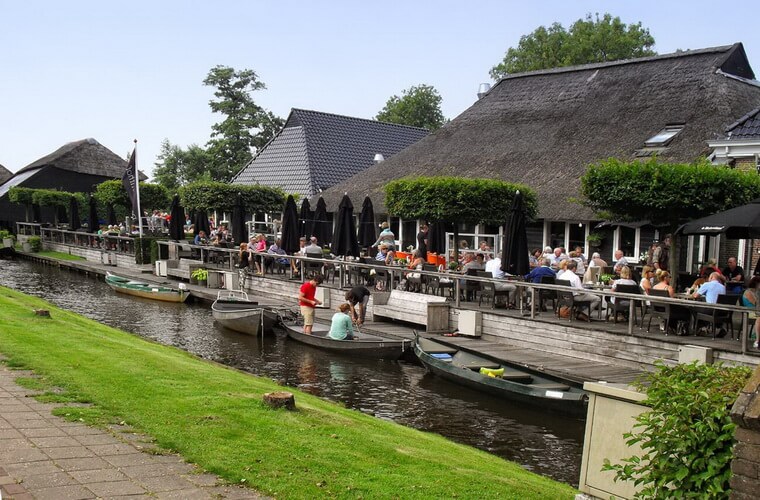 In peak season, there are more tourists than locals.

In fact, remember that in the tourist season there are a lot of tourists in Githorn. So taking idyllic pictures like this one is quite problematic. 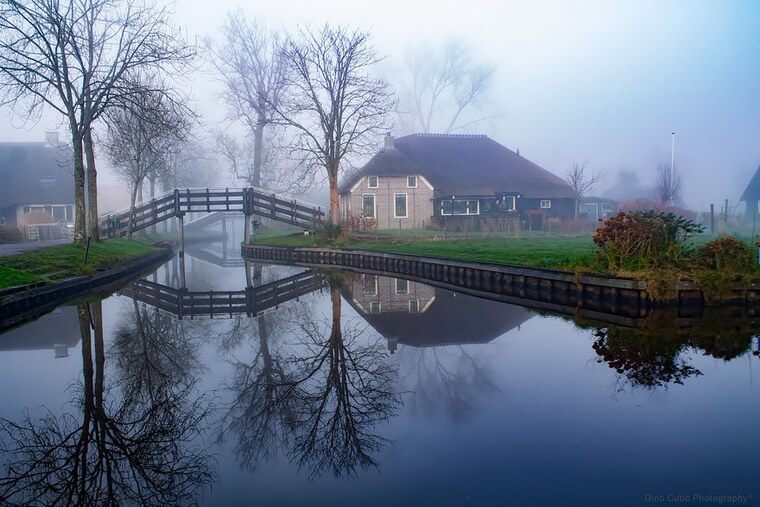 In the off-season, Githorn is a surprisingly peaceful place

Experienced travelers claim that Githorn is much quieter and calmer in the off-season. And if you’re staying here overnight, the best time to walk around the town is in the morning and evening. During this time, the number of tourists is minimal.

For more information, check out the official Githorn Village website.