Temples of the world

Traditionally, in Russian, the word “temple” is also used for places of worship of other religions: Buddhism, Hinduism, and paganism.

If you are in Bavaria, you should not miss the opportunity to make a pilgrimage to the Viskirche church, which is a striking representative of the Bavarian Rococo.

The Church of Santa Maria delle Grazie and Da Vinci’s “Last Supper” fresco, is located in the heart of Milan and is an outstanding architectural structure.

The Church of St. Olaf or Oleviste is one of the oldest buildings in Tallinn. Its main feature is its high spire, which can be seen from anywhere in the city.

Sistine Chapel at the Vatican is famous for its frescoes by Michelangelo, which are unique in their beauty and impression. They depict the past and future of mankind.

The history of the Church of the Savior on the Blood is considered one of the fateful for Russia. Therefore, the architects tried to create a special, native Russian style, different from the rest.

Karni Mata rat temple in India is a place of residence of more than 20 thousand rodents, which are carefully guarded and elevated to a divine cult.

Lalibela is one of the oldest cities in the world, whose underground temples are true masterpieces of engineering. They contain numerous artifacts of sacred significance to Christians.

St. Mark’s Church is a religious and historical landmark located in the Italian city of Venice.

Westminster Abbey is one of the oldest and most popular architectural monuments located in the British capital.

I would say that Hamburg reminds me of a careless multimillionaire who, after an extra drink, begins to remember how he once lost everything.

Among the many sights in Beijing, there is one 15th century temple called “TianTan”, this temple is located in the center of the Chinese capital.

St. Basil’s Temple in Red Square has a rich history, is interesting in its architectural concept, the cathedral acts as a museum and all kinds of tours are organized here.

Many go to the small Russian town of Murom, located in the Vladimir region, to visit the saints Prince Peter and Princess Fevronia.

The Church of the Sign of the Blessed Virgin Mary in Dubrovitsy is a real antique church in the Moscow region made of white limestone.

Church of the Intercession in Fili – an Orthodox church in Moscow, an architectural monument built in the Baroque Renaissance style.

The Church of the Tikhvin Icon of the Mother of God in Suschevo, surrounded by a garden is a true haven for the soul to rest in the center of a big city.

A hill near Glastonbury, with the medieval tower of St Michael’s Church, damaged in the earthquake of 11 September 1275.

At full or partial use of materials of this site the direct indexed hyperlink is obligatory.

10 most ancient temples of the world, which even today amaze with their greatness 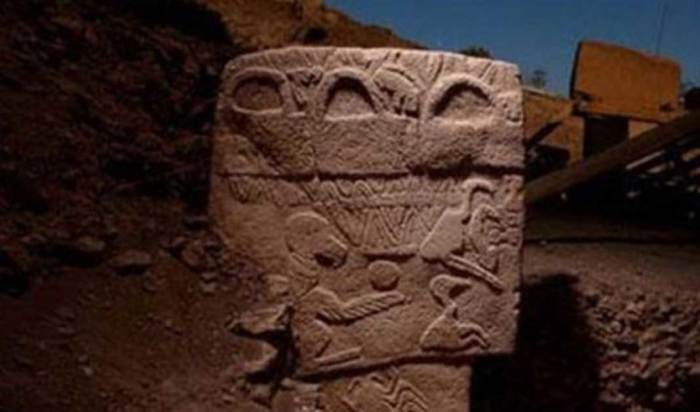 Cult buildings have been around for thousands of years and are a testament to other civilizations and cultures. These buildings even today fascinate with their beauty and grandeur. In this review we will talk about the 10 most ancient temples on our planet.

1. The Palace of Knossos 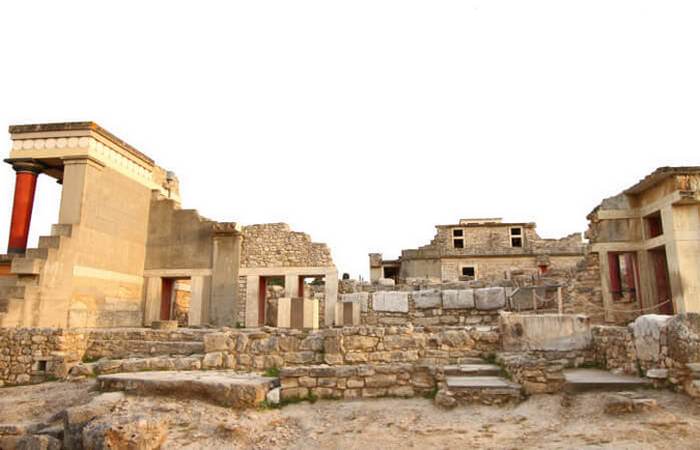 Greece Built southeast of Heraklion, Knossos was inhabited for several thousand years beginning in the seventh millennium B.C. It was abandoned after its destruction in 1375 B.C. The great palace of Knossos was built between 1700 and 1400 B.C., on the site of the first palace established around 1900 B.C. The function of this site is not entirely known, although it is claimed whether it was used as an administrative center or a religious center (or maybe both at the same time).

According to Greek mythology, the palace was designed by the architect Daedalus on the orders of King Minos, who then imprisoned the famous architect in a dungeon so that he would not reveal the palace plan to anyone. The palace was also linked to the mythological Labyrinth, which was the abode of the Minotaur. The palace was abandoned around the end of the Bronze Age (1380-1100 BC) because of numerous disasters, including earthquakes and fire. It is also one of the oldest buildings in the world . 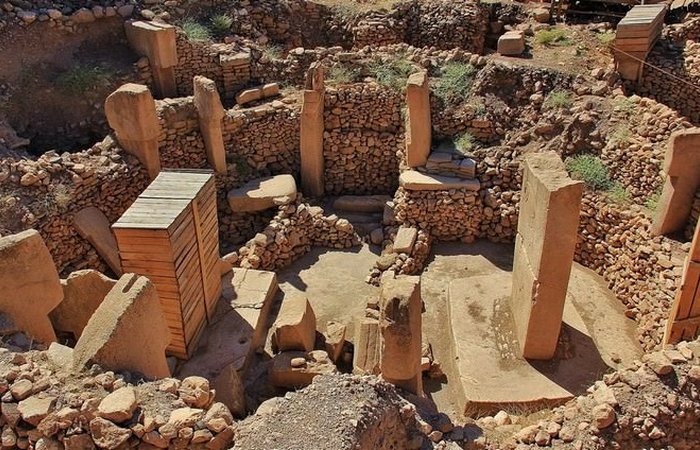 Turkey Göbekli Tepe, which is located on a hilltop in southeastern Turkey, is considered the oldest temple in the world. It dates back to the 10th-8th millennium BC, which means that the temple is already 12,000 years old. The excavations began in 1995 by Professor Klaus Schmidt, who regarded the site as a sanctuary. Archaeologists believe that it was a place of worship, ritual or religious purposes.

Carved reliefs have been found on the columns of Göbekli Tepe, mostly depicting lions, foxes, wild boars, snakes, cranes and wild ducks. The construction of the temple preceded the emergence of pottery, writing, as well as the invention of the wheel and animal husbandry. No traces of domesticated plants or animals were found at the excavation site.

3. the Temple of Amad 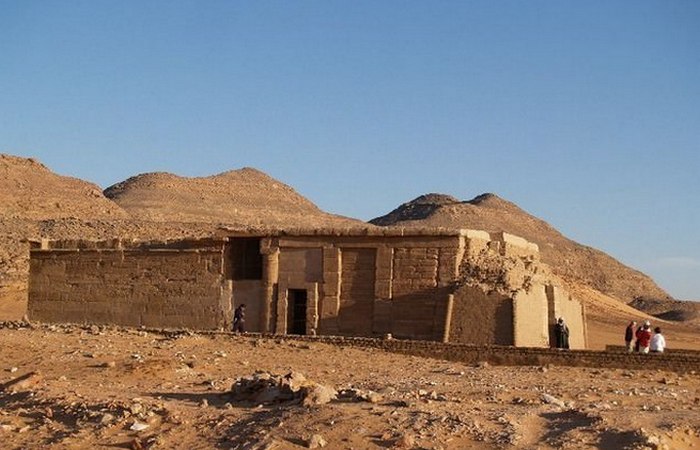 Egypt The Temple of Amad is the oldest temple in Nubia. It dates from the time of the eighteenth dynasty and was first built by Thutmose III, who dedicated the temple to Amon Ra and Re-Horahti. Amenhotep II continued the decoration of the temple of Amad, and his successor Thutmose IV installed a roof over the courtyard. Later, Ehnaton, who tried to abandon polytheism and introduce the cult of Aton, forbade Amon worship in the temple, but Seti I during the 19th dynasty put everything back on track.Two important inscriptions have been found in the temple of Amad. The first belongs to Amenhotep II and was made during the third year of his reign. It describes the ruthlessness of the pharaoh during the battles in Asia, where he personally executed seven chiefs of the Takhi region. The second text mentions the defeat of the attempted invasion of Libya during the reign of Merneptah. The temple retains many beautiful objects, including brightly colored reliefs.

READ
100 most well-known and unique reserves of the world 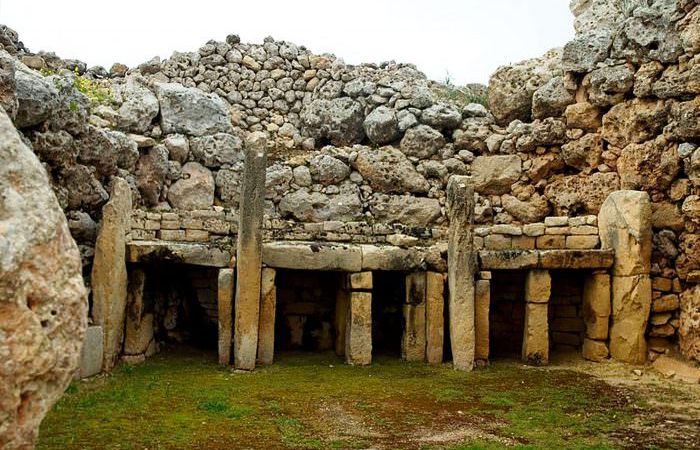 Malta They are older than Stonehenge and the great pyramids of Egypt. These are the two temples of Jgantija on the island of Gozo off the coast of Malta, which have been inscribed on the UNESCO World Heritage List. The temples, which date between 3600 B.C. and 3000 B.C., were dedicated to the Great Mother Earth. The evidence found in them also indicates that they once housed an oracle.

The name Jgantija comes from the word “jangt”, a Maltese word for giants, because local folklore believed that these buildings were built by giants who used them for worship. Very little is known today about the religious ceremonies that took place there, but scholars believe that animal sacrifices and “liquid sacrifices” were made here and poured into special holes. Jgantija may have been a fertility cult. 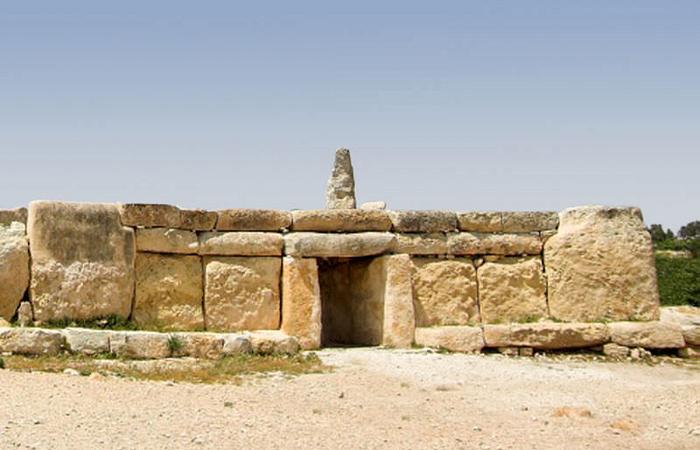 Malta These two temples were built between 3600 BC and 3200 BC on the southern edge of the island of Malta. The distance between the two megalithic temple complexes is approximately 500 meters. In 1992, UNESCO recognized these structures as a UNESCO World Heritage Site.

It is believed that the temples were used for astronomical observations or as a calendar. No written records have been found which would explain the purpose of these structures, but animal bones and sacrificial flint knives have been found, as well as holes through which something was lowered down on ropes (probably sacrifices). The temples were not used as tombs because no human remains were found in them. It is assumed that these 5500 year old structures were used for religious purposes. 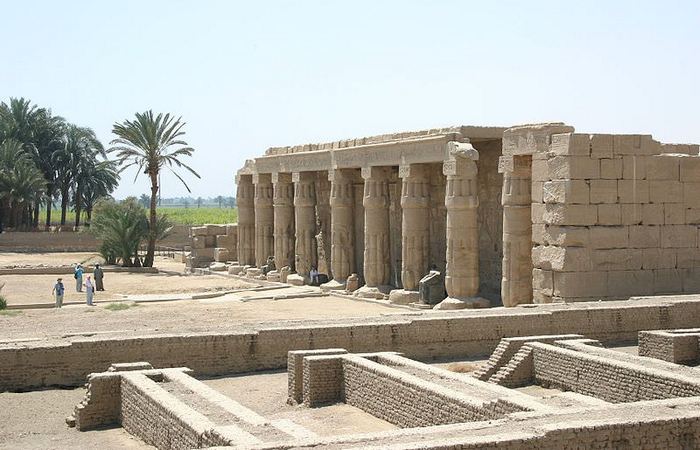 Egypt The temple is located in Abydos on the banks of the Nile River. It was built in 1279 BC around the end of the reign of Pharaoh Seti I. It is believed that his son Ramses II finished building this temple dedicated to Osiris, which has seven shrines, each dedicated to a different Egyptian deity (Horus, Isis, Osiris, Amon Ra, Ra-Gorakhti and Ptah). The most remarkable thing about this temple is the list of kings of Abydos, which is carved on the wall (it contains the names of 76 rulers of ancient Egypt). 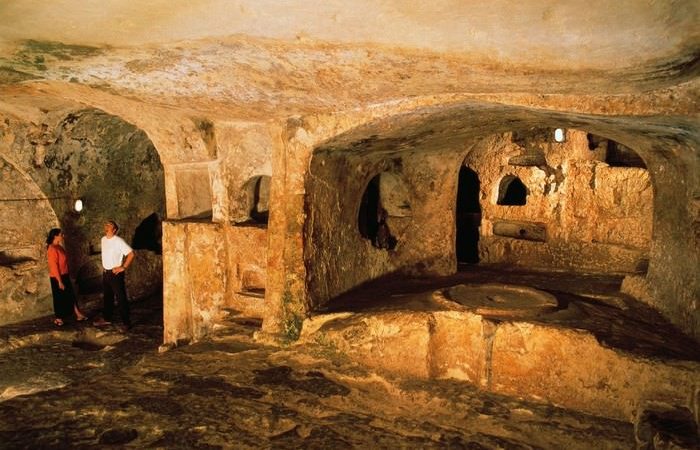 Malta Located in Malta, this temple was accidentally discovered in 1902. It is located entirely underground and is originally believed to have been a sanctuary. Archaeologists found the remains of more than 7,000 people in it, as well as a range of objects such as amulets, beads, pottery, stone and clay heads, and carved human and animal figurines.

The most remarkable discovery is a clay figurine called the “Sleeping Lady,” which scientists believe symbolizes a mother goddess. The site is believed to have been first used as early as 4000 B.C. and abandoned in 2500 B.C. Today it is a UNESCO World Heritage Site. In addition, only a few people a day are allowed to visit it, and you have to sign up in line weeks in advance. 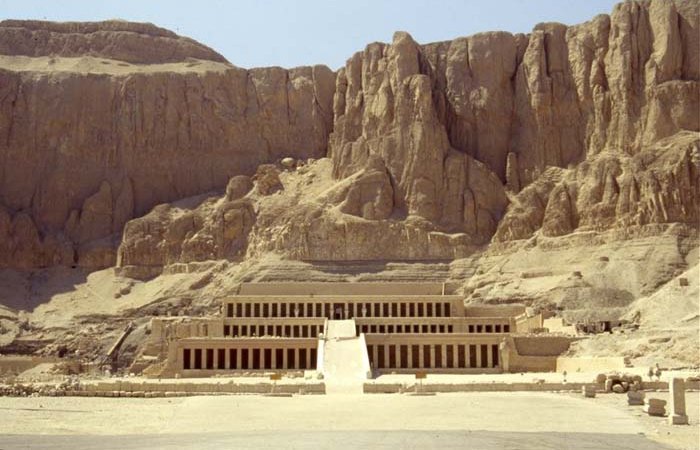 Egypt The Hatshepsut temple at Deir el-Bahri is located on the west bank of the Nile. It was designed by a statesman and architect of the female pharaoh Hatshepsut named Senmut. It took a total of 15 years to build this temple between the 7th and 22nd years of Hatshepsut’s reign (who ruled from 1479 BC until her death in 1458 BC). The temple was built to commemorate Hatshepsut’s achievements and to serve as a funerary temple for her, as well as to act as a shrine to the god Amon Ra. 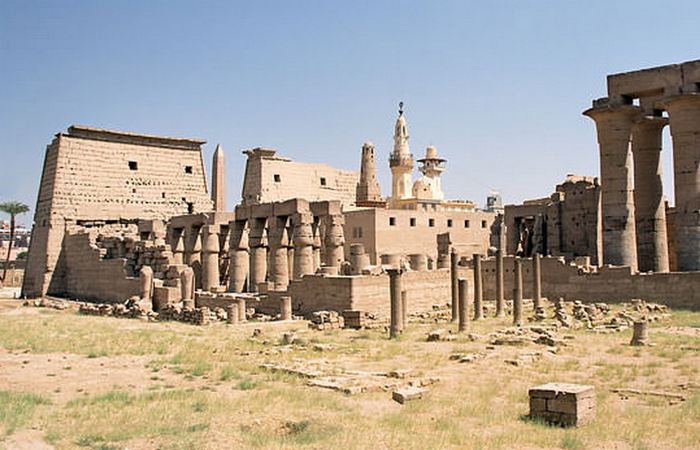 Egypt The Luxor Temple, located on the eastern bank of the Nile River, is one of the oldest Egyptian temples. Although today it is a tourist attraction, the temple was originally dedicated to the three Egyptian gods, Amon, Mut and Khonsu. The temple was also used for the festival of Opeth, one of the most important religious festivals in ancient Egypt. The temple was built in 1400 BC by Amenhotep III (1390-52 BC) and was later completed by Tutankhamun (1336-1327 BC) and Horemheb (1323-1295 BC). 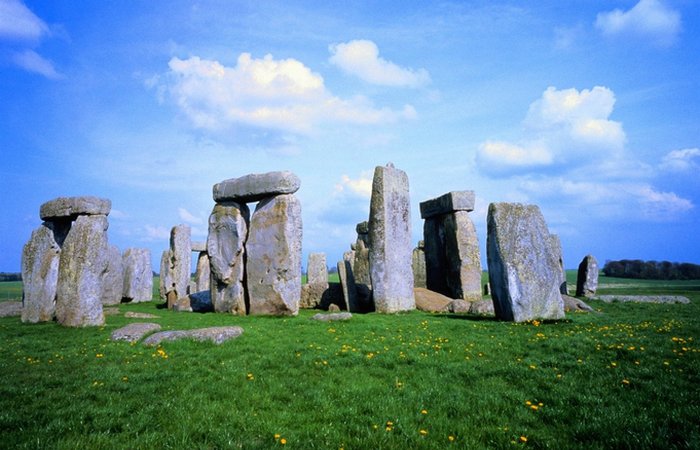 England Stonehenge, located in Wiltshire, England, is one of the world’s most famous and oldest megalithic structures. It is believed to have been built between 3000 and 2000 BC. Stonehenge consists of a ring of upright stones, each about 4 m high, 2 – 3.5 m wide and weighing 25 tonnes.

It is not known which civilization made this structure, as no written records remain from it. In addition, people do not know the exact purpose for which Stonehenge was built. It is widely believed that the monument was used as a burial ground or ceremonial complex or a temple of the dead.

No less surprising today look 10 ancient artifacts found in the depths of the sea . For scientists there are still a huge number of unsolved mysteries.