The population of the German city of Wuppertal (then an agglomeration of several settlements) was already about 400,000 at the end of the 19th century. Its roads were not very wide and were intended for pedestrians and horse-drawn carriages.

Industrialization and development raised the issue of public transportation. No subway could be built here because of the rocky terrain and large volumes of groundwater. Conventional tramways were hindered by the rather narrow streets.

But practical German engineers found a way out. If you can’t put a streetcar on the ground, why not suspend it. The result was the Wuppertal Suspension Road. 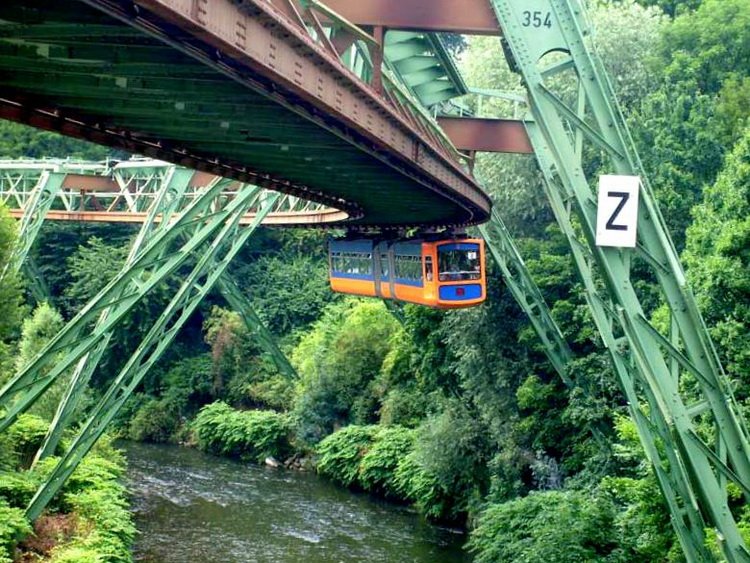 Wuppertal Suspension Road on the map

Suspended tramway is a two-rail monorail system suspended on special trestles. That is, the road can run trains in opposite directions. Its length is 13.3 kilometers. Of these, as much as 10 runs above the Whopper River at a height of 12 meters, and the rest is already above the city and just below, at only 8 meters. The maximum speed that can develop the air streetcar about 60 km / hr, but it usually runs the route at an average speed of 30 km / hr.

Construction began in 1898, with the first tests of the aerial tramway being conducted in the same year. Already in 1900, Kaiser Wilhelm II himself (who was ruling the country at the time) rode the first aerial tramway. It happened on October 24, 1900, and already on March 1, 1901 the Wuppertal aerial tramway was open to the general public. 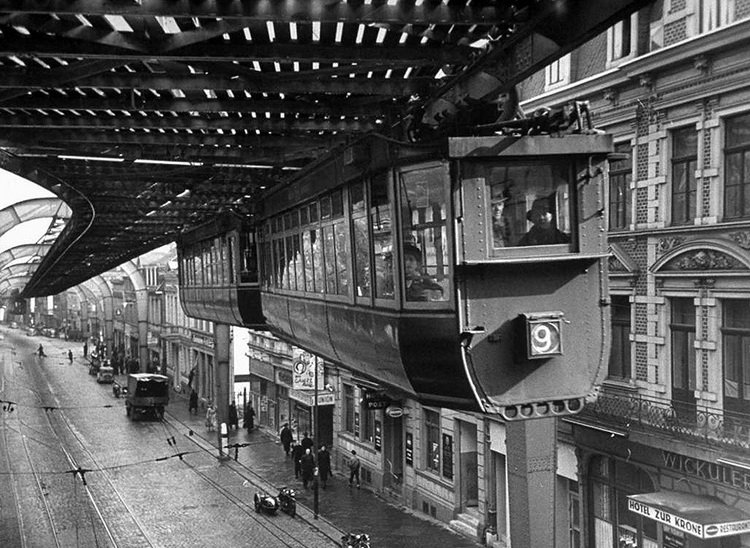 Officially it is called the Eugen Langen monorail system. (in the original Einschienige Hängebahn System Eugen Langen). Now the aerial road has 20 stations. Most of them were built in the first 3 years after it went into operation.

READ
Cave Lake Melissani - the abode of the nymphs. Greece

Technically, the aerial tramway is several cars, literally suspended above the ground. The rolling stock itself is 24 meters long and is designed to carry 178 people. Only 48 passengers will be able to ride sitting (that is the number of seating places envisaged by the designers). The others will have to make an air route standing up. But both of them will have a chance to feel themselves in a cable car somewhere in the mountains.

Like any other public transportation, the cable car has had its share of mishaps. The case of Tuffy the elephant is widely known. On July 21, 1950, the director of the Althoff Circus, Franz Althoff, decided to take an elephant named Tuffy on this road for publicity purposes.

But whether the elephant didn’t appreciate the honor, or didn’t have a ticket for the aerial streetcar, Tuffy became nervous and easily broke through the side of the streetcar and fell out. It was a good thing the train was passing over the river at that moment. Tuffy fell right into it, and got away with only minor abrasions and a minor scare.

But there was panic in the cabin and several passengers were injured. But all ended safely, everyone is alive and well. The elephant was fished out of the river. Now the elephant falling out of the streetcar is painted on the house in that place. It’s also a kind of landmark. To be fair, the picture of the elephant falling down is just a montage, because there was simply no one to photograph the incident at the time. 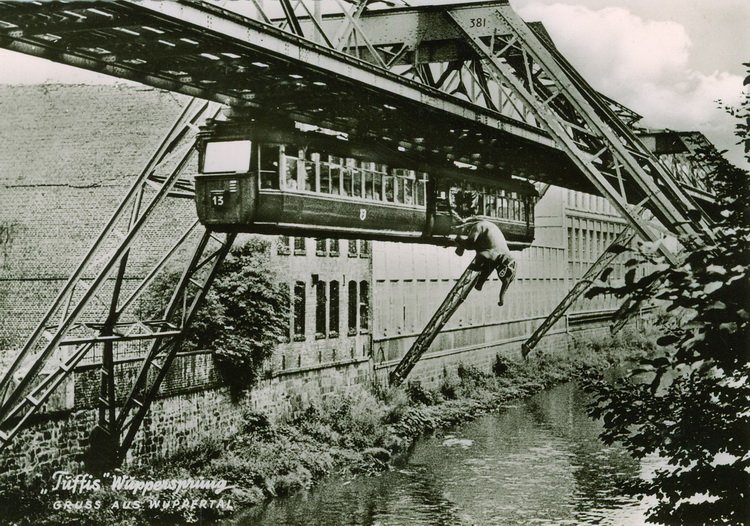 Unfortunately, on April 12, 1999, the train accident ended much sadder. Due to a metal clamp left on the track after repairs, the train derailed and collapsed into the river. Then 5 people died and about 50 were injured in various ways.

READ
Seville. The sights of the city. 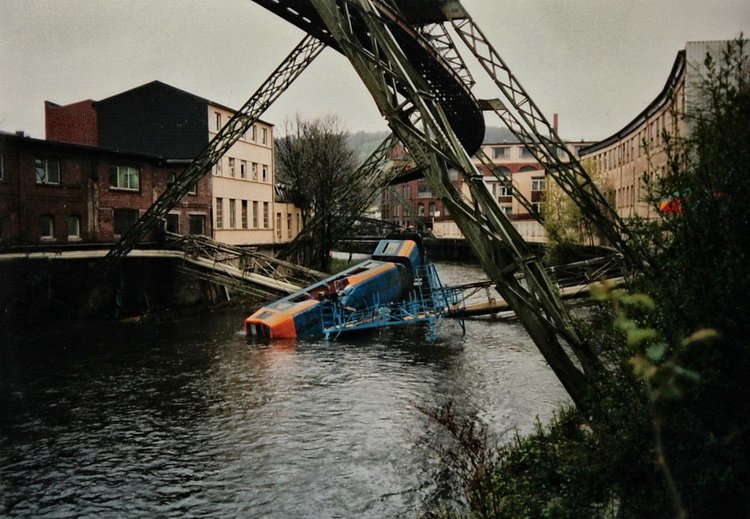 An accident with a crane was also recorded on August 5, 2008. An air streetcar collided with a truck crane that was passing underneath and the driver was seriously injured.

It should be said that the Germans invented and built interesting constructions. For example, the Bastai bridge, built in the mountains. Sometimes it even appears above the clouds. And we should pay tribute to the German ingenuity, remembering the no less striking structure – Magdeburg Water Bridge. 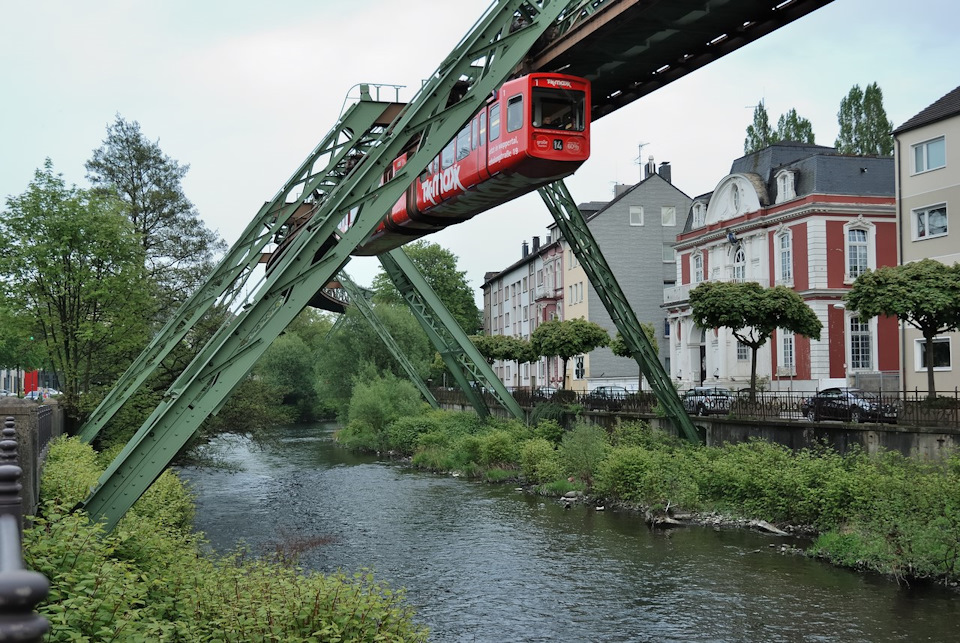 The Wuppertal Suspension Road was opened in 1901 in Wuppertal, Germany. It is one of the oldest monorail roads in the world, still in operation today. What is more interesting is that the Wuppertal was not copied anywhere else in the world as a model of public transportation. It is the first and only suspended tramway monorail in the world. . Let’s learn more about it … . 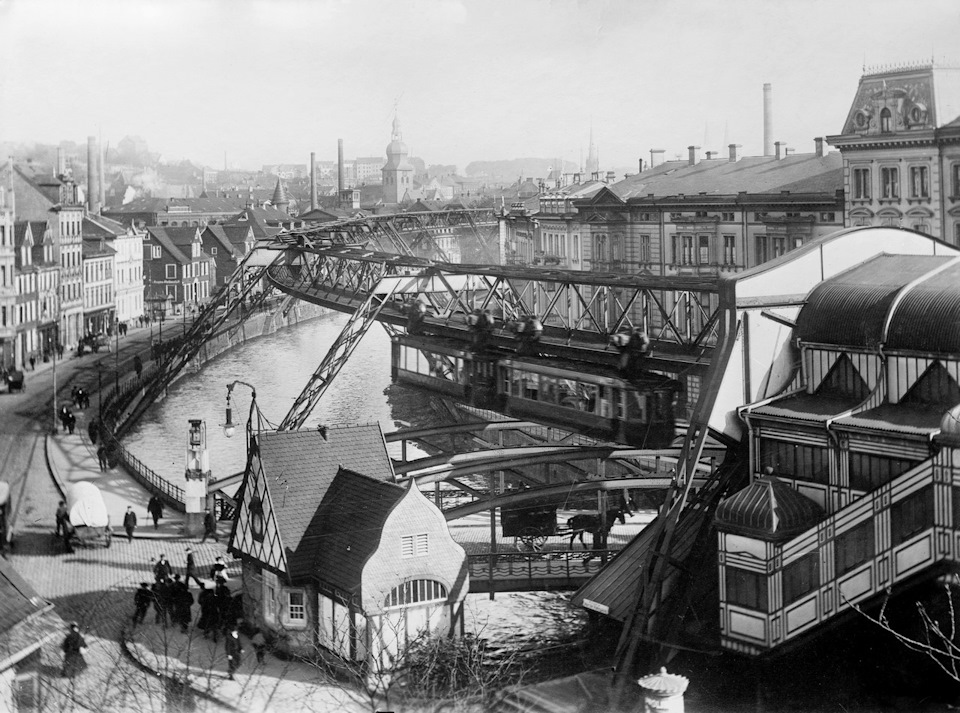 At the end of the 19th century Wunderthal was experiencing the peak of industrialization. The population reached 400,000 and grew further. And even before the beginning of the industrialization period it was a prosperous city, larger than Cologne. The roads here were for carriages and pedestrians, and there was simply no room for tramways. Subway subway construction was also ruled out because the area was very rocky, with lots of ground water. German engineers decided that the only way was to run the streetcar by air. 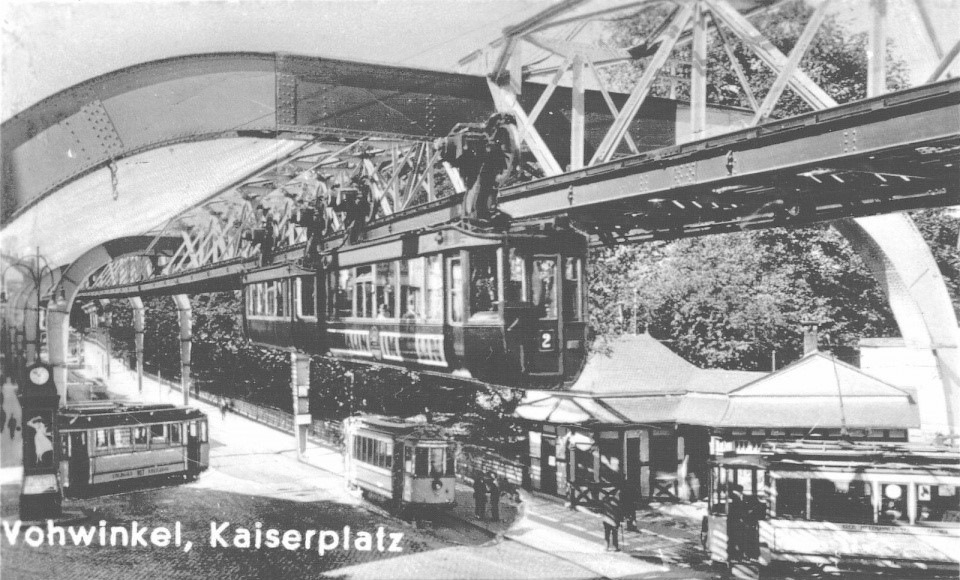 Construction of the Wuppertal Suspension Road (Schwebebahn) began in 1898, and the same year its first test was made. In 1900, one of the first official visitors was Kaiser Wilhelm II, who rode the monorail and in 1901 it was opened to the public. The tramway became one of the most prominent, in every sense of the word, landmarks of Wuppertal. Even after 100 years, it is still the easiest and fastest way to get around the city. Most of its stations were not opened immediately, but within 3 years of opening. During the war, from 1943 to 1946, the suspended road stopped working due to damage. 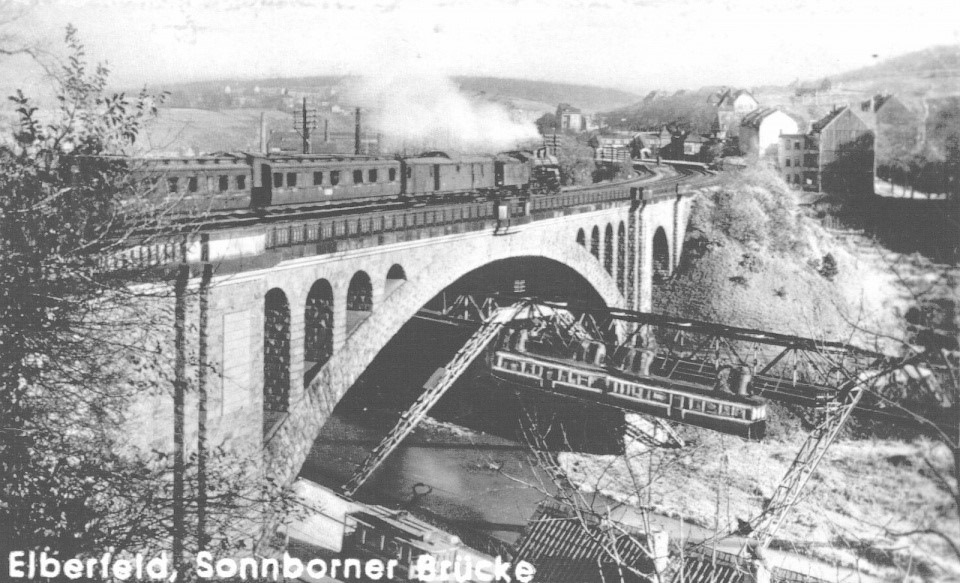 Cableway route of 13.3 kilometers mostly stretches along the Wapper River at a height of 12 meters, and only three kilometers of part passes above the streets at a height of 8 meters – it is called a land route. It is due to its location above the river that Schwebebahn was able to avoid serious destruction during World War II. 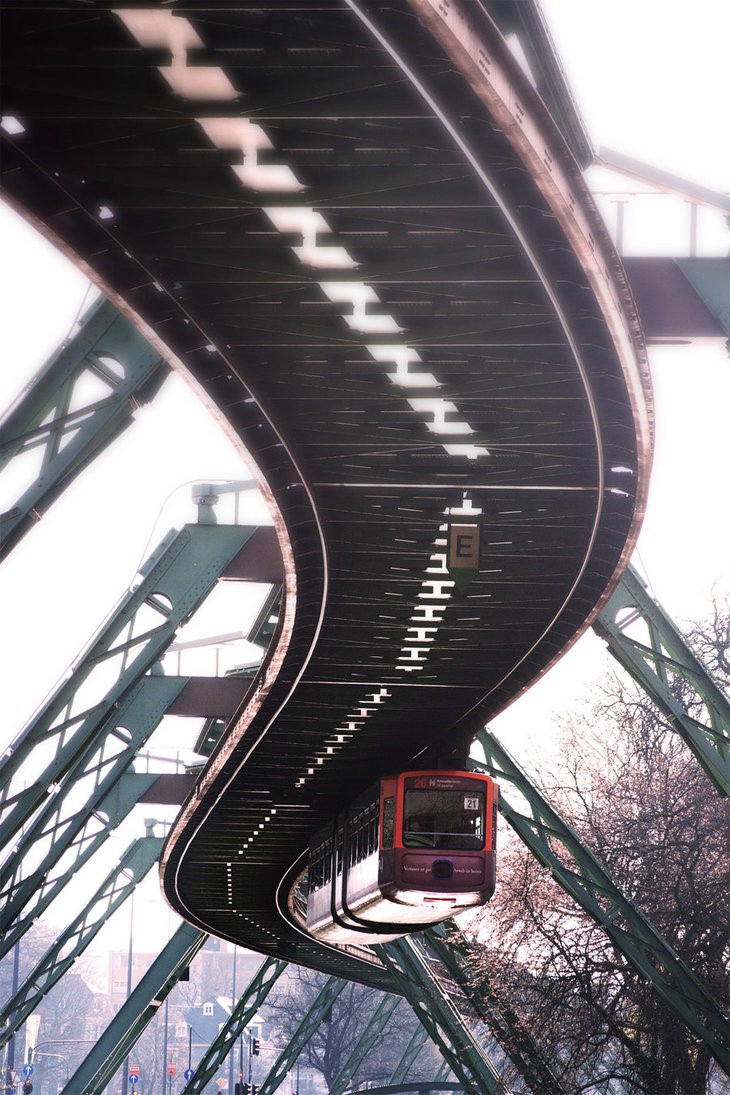 The monorail lasted a full 98 years before the first fatal accident occurred here, making it the safest public transportation system in the world. The only accident occurred in April 1999, when the train derailed and fell into the river. Five people died in the accident and 49 were injured. The two previous accidents were non-fatal. After one of them, when a truck crashed into the anchoring of the suspension railroad, all the supporting supports had to be reinforced with concrete berms, which still “decorate” the city. 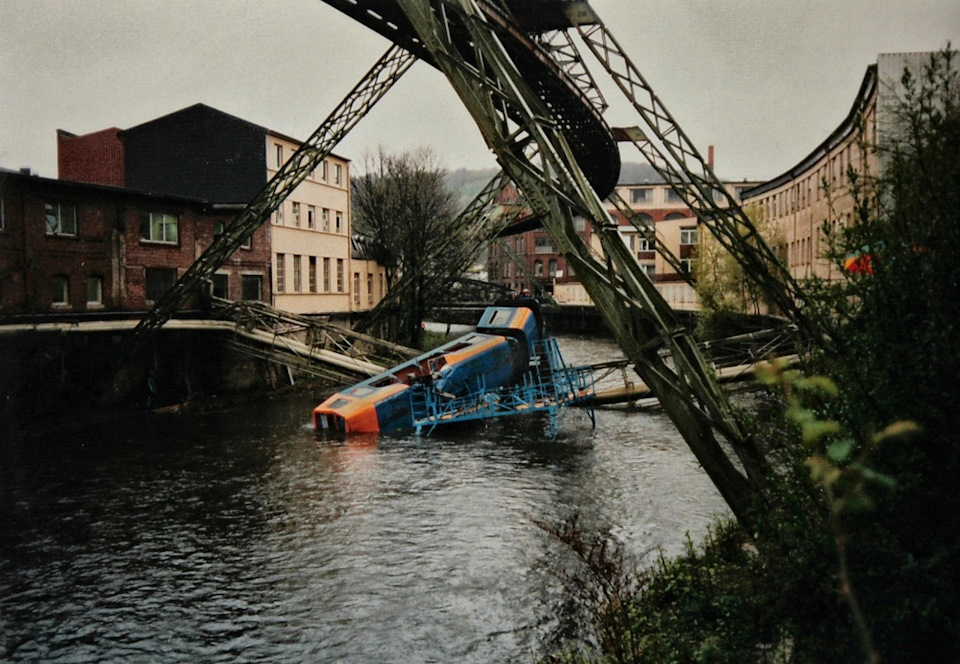 The most unusual incident in the history of the road occurred on July 21, 1950. On that day, the director of the Althoff Circus decided to take Tuffy the elephant on the monorail for publicity purposes. The elephant was placed in the carriage at the Alter Markt station. 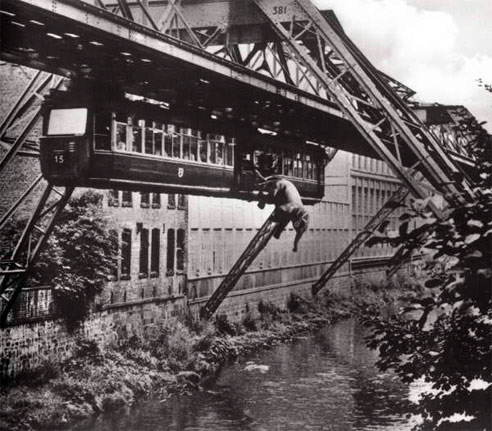 However, the elephant did not like the idea of riding the monorail and became restless. Shortly after the departure Tuffy broke through a wall and fell out of the carriage. Fortunately, the train was passing over a river at the time. Tuffy fell into the water from a height of five meters and was not seriously injured. During the incident, or rather during the panic that followed the elephant’s fall, several passengers were also slightly injured. There is now a picture of a falling elephant on the wall near the scene of the incident (between the Alter Markt Adlerbrücke station). 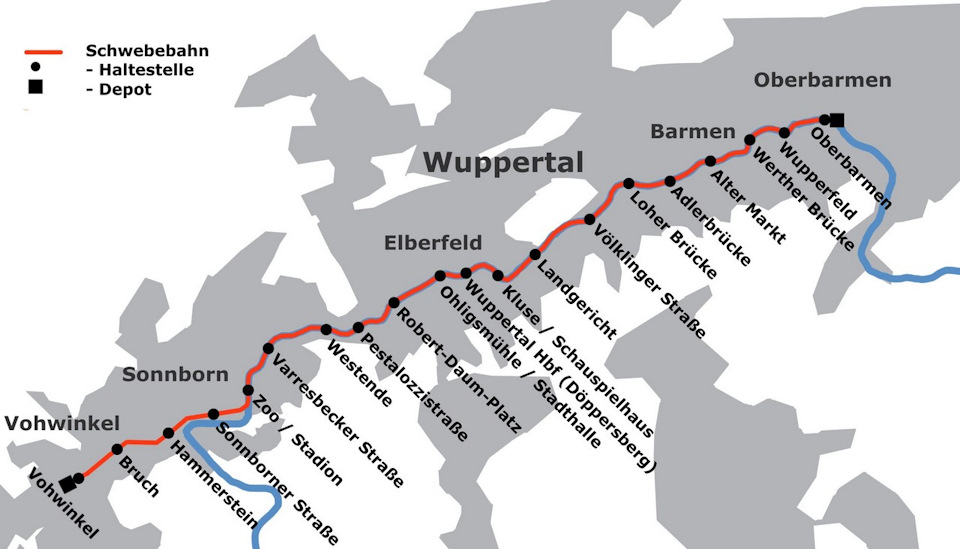 -Wuppertaler Schwebebahn is one of the Wuppertal public transport lines, which is a double-gauge monorail suspension system on trestles, with 20 stations, total length 13.3 km, 10 km tracks run above the river Wuppert at a height of about 12 meters, the remaining 3.3 km above the city streets at a height of about 8 meters. The maximum speed of the road trains is 60 km / h. The road was built in 1900 and put into operation in 1901. The official name of the road – German. Einschienige Hängebahn System Eugen Langen (monorail suspension road system Eugen Langen). – Technical characteristics Length: 13,2 km Electrification: 600 Vdc Maximum gradient: 40 thousandths Max. speed: 60 km/h Average speed: 27 km/h Travel time: 30 min. Construction of the road began in 1898, and on March 1, 1901 the monorail was put into service. –