As Jorge prepared for the road, he prayed long and hard. As carefully as he had never prayed before, for if God Viracocha himself did not bless him on his journey, no one would know if the young student would make it to La Paz, the unofficial capital of his country. It’s only 57 kilometers from his home town of Koroiko, in the eastern foothills of the majestic Andes, to the (even if unofficial) capital. But it’s a straight line. Jorge was upset, remembering that it was already 95 kilometers over mountain passes and serpentines. But even that didn’t scare him. The scariest part was getting over the first 40 kilometers.

His grandfather often whispered, seriously looking straight into his eyes “Sometimes it seems to be alive, it looks at you, it chooses you, it takes you,” and then laughed and cheerfully added “Do not worry, boy, some still pass it to the end. Looking out the window and taking a breath of fresh and humid air, Jorge looked west, to where She began. For some reason he had always called her simply “She,” afraid to say her true name. But today he would not only call her, he would conquer her. She is the Road of Death.

Of course, all the events described are fictional, but it may well be that this is how many Bolivians have been going on this deadly journey recently. 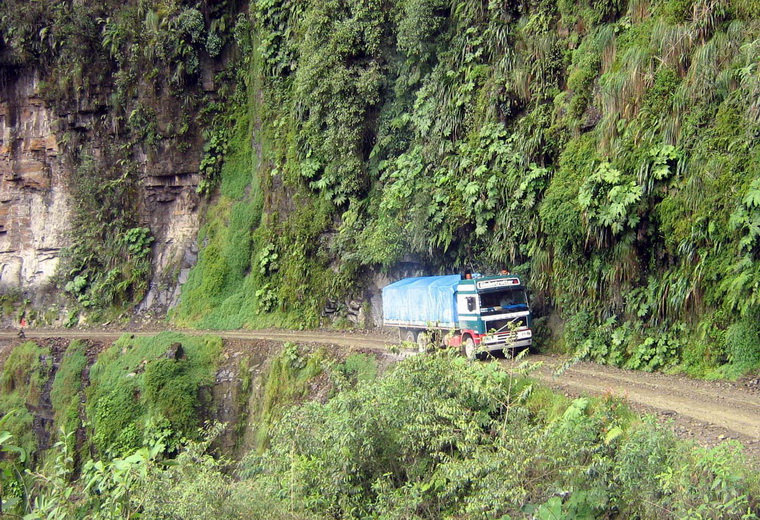 Would you pray before such a road?

Not surprisingly, people still pray before taking this road. Technically it is called the Northern Yungas Road, but no one actually calls it that. All Bolivians and the rest of the world know it as the Yungas Road of Death. More optimistic people call it the Road of Destiny. Although the first name suits it better. You can find out why below. 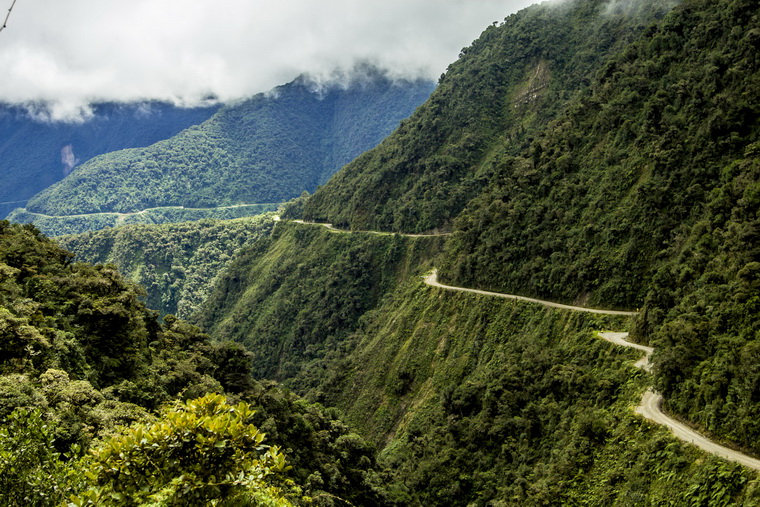 Death Road is located in the eastern part of Bolivia, in the province of Yungas, and connects La Paz, located in the crater of an extinct volcano at an altitude of 3600 meters with the small town of Koroiko, in the heavily forested mountains.

The Road of Death on the map

What’s so scary about it, and why is it called the Road of Death?

Until recently, it was the only way to connect Coroico and La Paz. Anyone who wanted to get to or from La Paz from Coroíco had to take one of the most dangerous routes in the world. 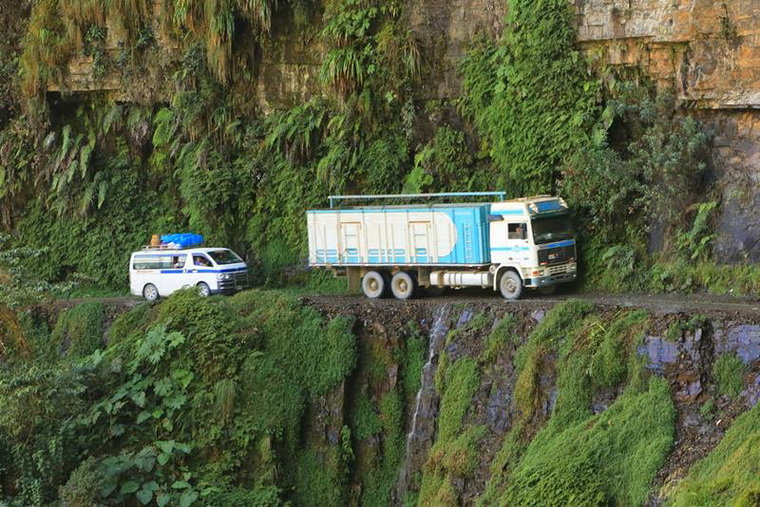 The Road of Death is a winding mountain path that runs at quite a high altitude. It is an extremely narrow (usually no more than 3.2 meters) one-lane, but two-way road. On one side of the road are steep steep mountains, and on the other side are equally steep and equally steep precipices up to 600 meters deep.

From afar, the Road of Death looks like a scratch on the body of the mountains. But it can hardly be called a road because the main part of the way is just flat and rolled dirt track. There is no asphalt. The road is rocky and clayey. That’s why it gets washed out in the rainy season. Driving on it at this time is the most dangerous and unpredictable. There’s a good chance of mudslides and rockfalls. There have never been any fences, bump-outs or braking strips, and it is unlikely that they will ever appear.

Be sure to watch the video at the end of this article (especially the first and complete). Feel for yourself what desperate drivers feel as they embark on this perilous journey.

READ
A boiling river in the Amazon . Peru 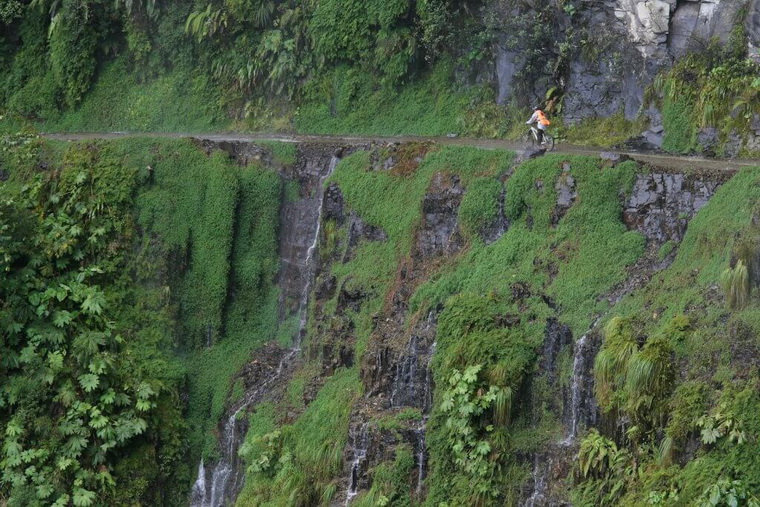 The road was built by captive Paraguayans in the 1930s during the Chaco War between Paraguay and Bolivia for control of the northern Gran Chaco region.

The elevation gradients on the Road of Death are about this. When leaving La Paz, where the elevation is 3,600 meters, the road climbs to 4,650 meters at the Cristo de la Cumbre Pass (originally Cristo de la Cumbre) and then descends to 1,200 meters the rest of the way all the way down to Coroico. Add to that the steep turns and sharp turns, and you have one of the most extreme tracks on the planet.

In 1995 the Death Road was voted the most dangerous in the world. Every year 200 to 300 people die here. About 30 cars fall into the abyss. And thirty years ago about a hundred cars a year flew off the road. As a somber reminder, crosses have been erected in many places, and the slopes of the precipices are strewn with the car wrecks. 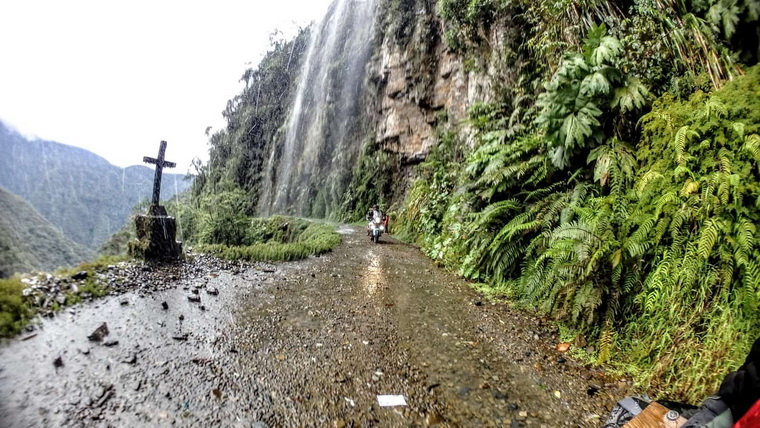 The Road of Death Today

Today, Bolivian authorities have built a safer redundant road. It is much wider, paved and guarded. It is already a modern and safe road from La Paz to Koroiko. Despite this, the Death Road is still used by desperate locals and tourists.

A popular attraction on Death Road (besides jumping into the abyss with a car) is the bicycle tour. That is, you are given a bike, equipment and a kick under … you rush almost constantly under the hill for about 64 kilometers (total length of about 70 km, but at the initial stage there are ascents). Sometimes you can reach a speed of 60 km/hour. But it is better to stick to a safer speed, as 18 cyclists have already crashed on this road since 1998. You don’t want to add to that sad statistic.

If you do venture out on the Death Road you will have a unique opportunity to see the incredible scenery that surrounds you. There is no point in describing them, you have to see them. But you have to do it without taking your eyes off the road, and it is better to stop and enjoy the views to your heart’s content.

If you decide to drive along the Road of Death by car, it is highly recommended not to do it alone. It’s better to hire an experienced guide with his car. Believe me, he will cope with the task much more professionally. 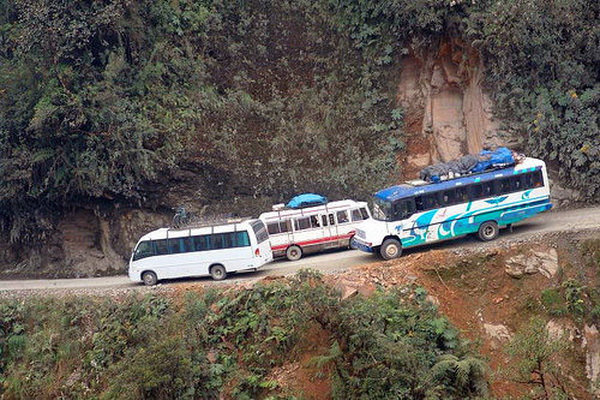 The Road of Death in Bolivia. Camino-Los Yungas.

The Yungas Death Road is one of the most frightening roads in the world where people pray before driving on it.

The Death Road is one of five routes connecting the Bolivian capital of La Paz with the province of North. The road climbs to about 4,650 meters, up to La Cumbre Pass, from where it descends to the 1,200-meter mark, winding down steep slopes.

From 1932 to 1935 Bolivia fought a war with Paraguay. During this war, the Bolivian army captured several thousand prisoners of war and sent them to pave the road from La Paz to Koroiko in difficult and dangerous mountain conditions. In the 70s of the twentieth century, the reconstruction of the old dirt road was engaged in the U.S. company, but the work was limited to asphalt the first 20 kilometers of the road.

The road received its name in December 1999, when a car with eight Israeli tourists fell into a chasm. Prior to that, on July 24, 1983, a bus with over a hundred passengers fell into the canyon.

The total length of the route is 70 kilometers. Most of the road is about 3.2 meters wide, allowing only one vehicle to pass. The road connects the Bolivian cities of La Paz and Coroico.

During the rainy season, from November to March, rain and fog greatly reduce visibility, and streams of water erode the pavement and also make it difficult to travel. Frequent dense fog, rain, and drastic changes in temperature negatively affect the road surface. The clay surface turns into slippery mud after rain. Rockfalls are a danger in the summer, and visibility is impaired by the cloud of dust that rises from the road.

Although there is a right-of-way rule within the state, it does not apply to Death Road. It is safer to drive on the left side of the dangerous road, as this position gives the driver a better view of the edge of the road.

There is an unspoken rule among local drivers: the downhill driver does not have the right of way first, instead he must take the outer edge of the road and let the uphill driver pass. This makes it easier for the car to descend and at the same time guarantees the safety of the driver who ascends.

Large vehicles and buses provide a very difficult situation for passing each other.

Each year, about 300 travelers and locals are killed and more than 30 cars and buses are crushed on the steep slopes of the mountains where it is paved. Along the road you can see numerous ominous evidences of the tragedies that occurred here – the wreckage of cars and trucks (I will not traumatize the psyche of impressionable readers with pictures, I am one myself!), broken trees and makeshift crosses erected by relatives of the victims.

Nowadays, La Paz and Yungas are connected by a new, safe road that was commissioned in 2006. It meets all the requirements for mountainous road sections. But despite this alternative, some extremists are willing to take the Road of Death as a nerve-racking journey. Some go to the road by car, and fans of particularly thrill-seekers – on a bicycle. On this type of transport pedaling is practically unnecessary. All 50-70 kilometers you can go without making any effort. But you need to be extremely careful and do not let the bike accelerate at high speeds.