Among the sights of Vienna, there is one building, the whole history of which brings horror. The Tower of Fools – this is the name assigned to one of the buildings of the Museum of Natural History, which used to hold the insane in inhuman conditions, but now houses a collection presenting visitors with all imaginable and unimaginable pathologies and deformities. 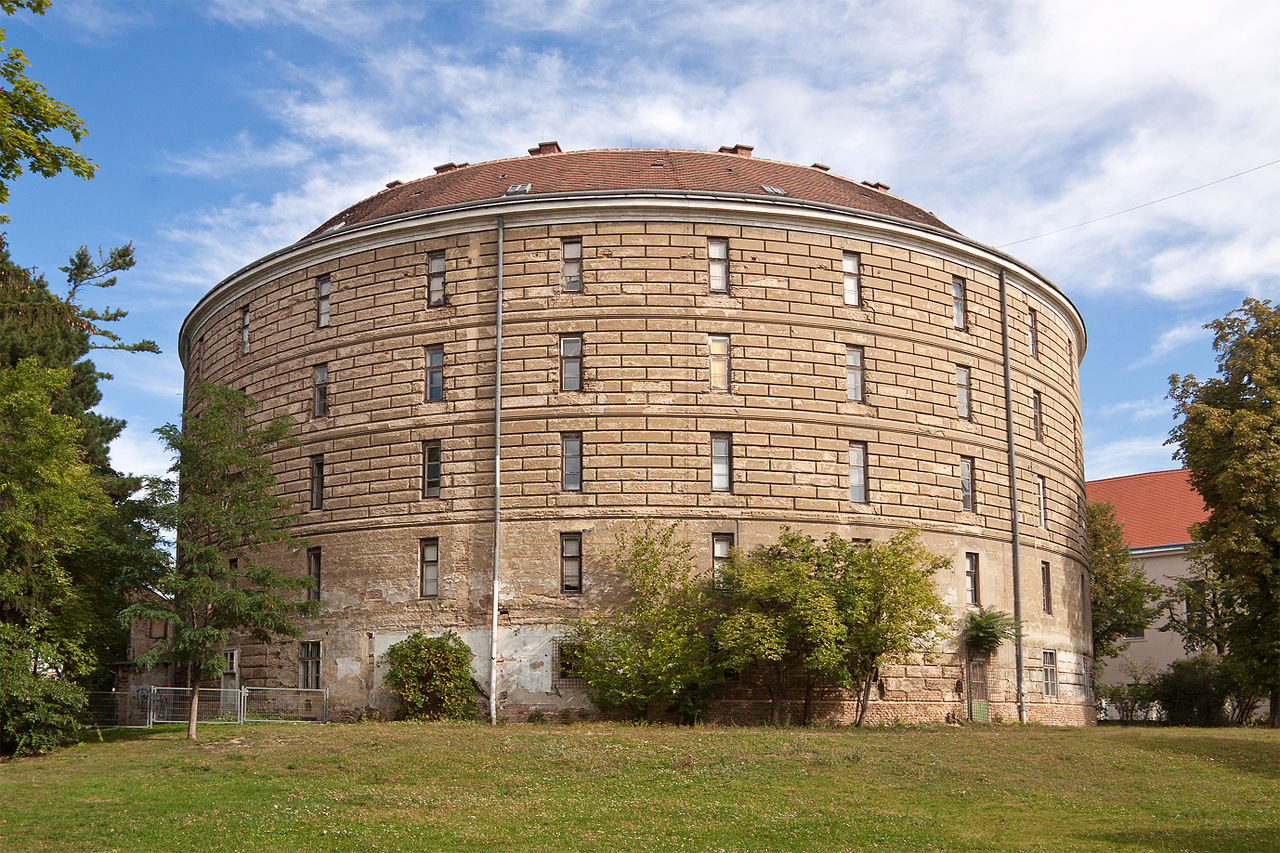 The Tower of Fools is a gloomy five-story building that looks like a squat cylinder from the outside. It is located on the campus of the University of Vienna. Among the locals, the tower is also known as the “rum baba” because it resembles this pastry with its unusual shape. 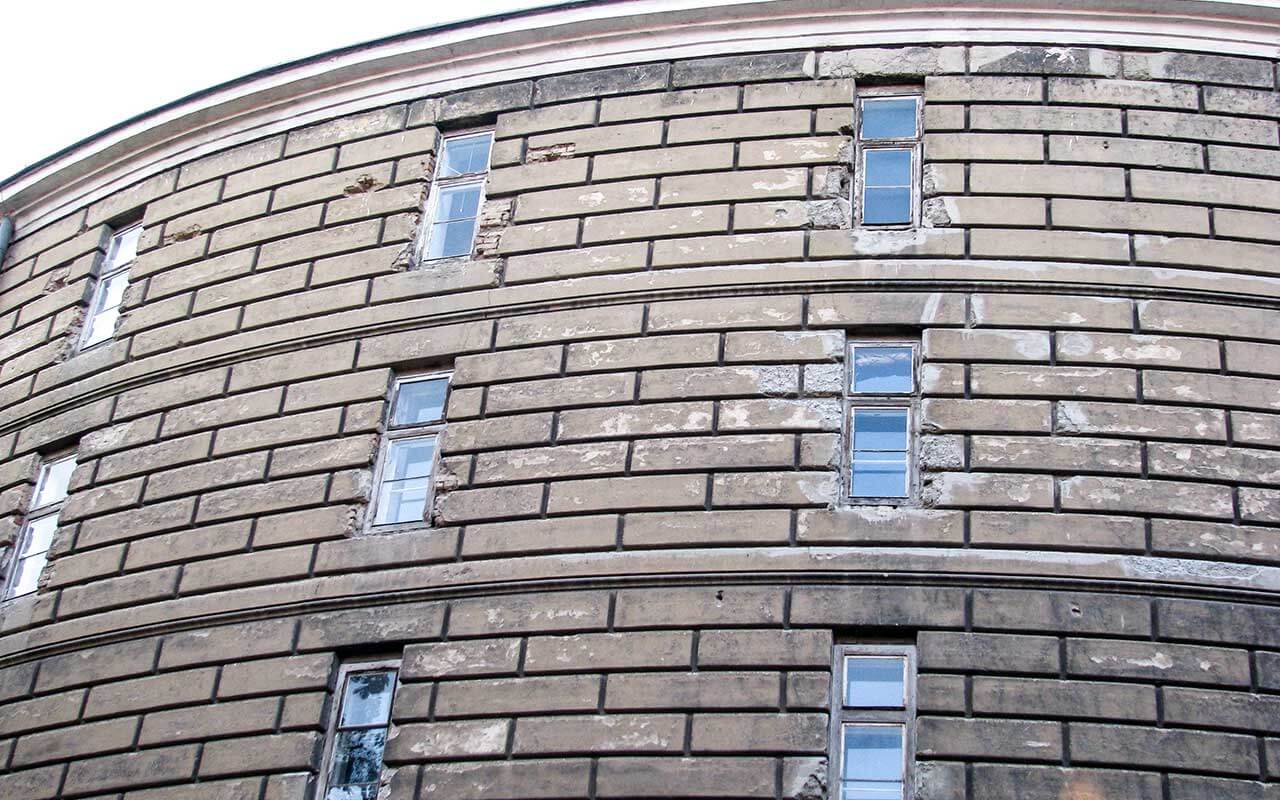 Each floor of the building is a rounded corridor, on both sides of which are the entrances to small rooms with one narrow window. A wooden octagon crowns the structure.

The history of the tower is closely connected with the name of Emperor Joseph II, who, at the end of the 18th century, ordered the reconstruction of the old building and founded there the innovative hospital for those times. At first the tower served as a hospital, maternity hospital, and a madhouse at the same time, but later it became a house of grief only, i.e. was completely devoted to the needs of treatment of the mentally ill. 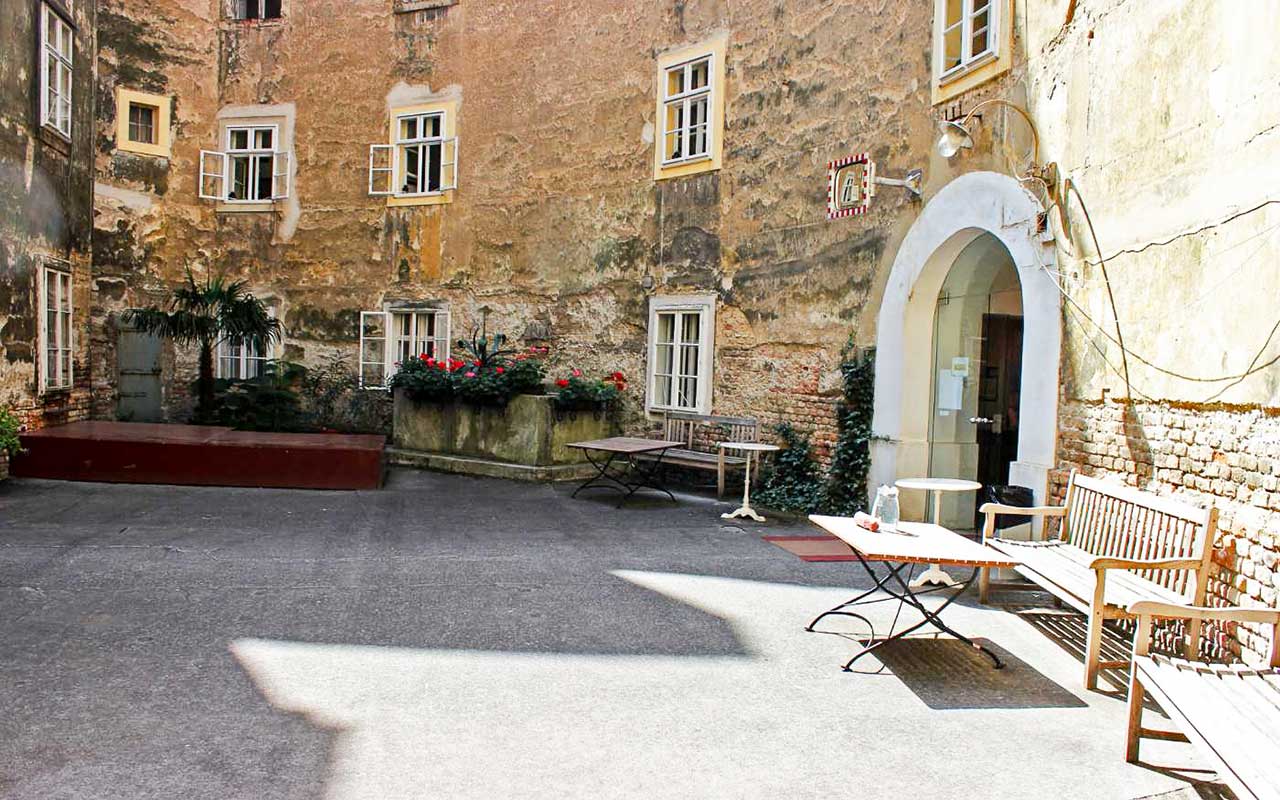 Psychiatry at that time was at ground zero – in essence, the hospital became a place of confinement for the unhappy patients. The violent ones were chained up, while the rest wandered freely through the corridors. The wards had no doors, and there was no running water in the building, since water was considered dangerous for the mentally ill at the time.

Because of the scarcity of entertainment in those days, the madhouse was besieged by crowds of curious people, and to protect patients from gawkers, the asylum of fools was enclosed by a wall. The building is also notable because on the orders of Joseph II there was one of the first not only in Austria, but also in the world, lightning rods. Historians assume that the purpose of its installation was to try to use lightning discharges to treat mental illness.

In the middle of the 19th century, the Fool’s Tower in Vienna became a place of confinement for the insane, who were found to be hopeless, and those who were attempted to be treated were transferred to a new asylum. And in 1869 this asylum for the insane was closed, and for the next 50 years the tower remained empty.

At the beginning of the 20th century, the building was converted into a dormitory for the medical staff of Vienna’s city hospital. Later it served as a storehouse for medicine, workshops and a dispensary for doctors. In 1971, the Tower of Fools was transferred to the University of Vienna, where a pathology museum was opened and the largest collection of pathology and deformities of the human body, not only in Austria, but also in the whole world, was placed.

What can be seen inside

The collection, which formed the basis of the exposition of the Museum of Pathology, which operates in the Tower of the Insane, was begun in the late 18th century by naturalist Josephus Pasquale Ferro. His successor was Johann Peter Frank, head physician at the Vienna City Hospital, who founded the first institute and museum of pathological anatomy in Austria. Since then, the collection has grown to over 50,000 exhibits. 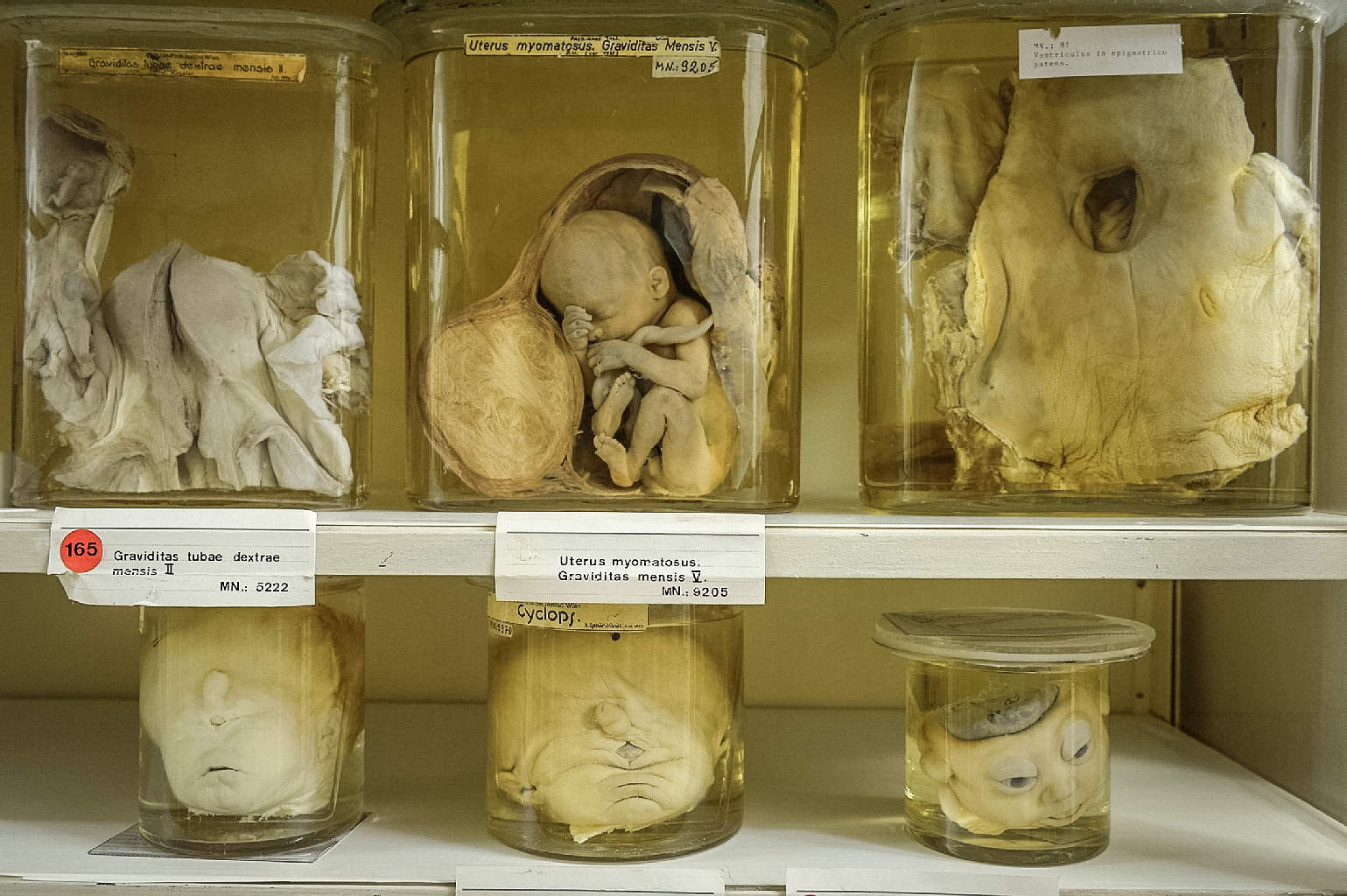 For more than two centuries, surgeons, pathologists and scientists in Austria collected the exhibits that fill the many rooms of the Tower of the Insane in Vienna today. The collection was particularly generous during the epidemics that were frequent at the time. For the squeamish and the faint of heart, a visit to the museum halls can provoke many unpleasant emotions. Those who have been to the Kunstkammer of St. Petersburg, can easily imagine the content of this collection. 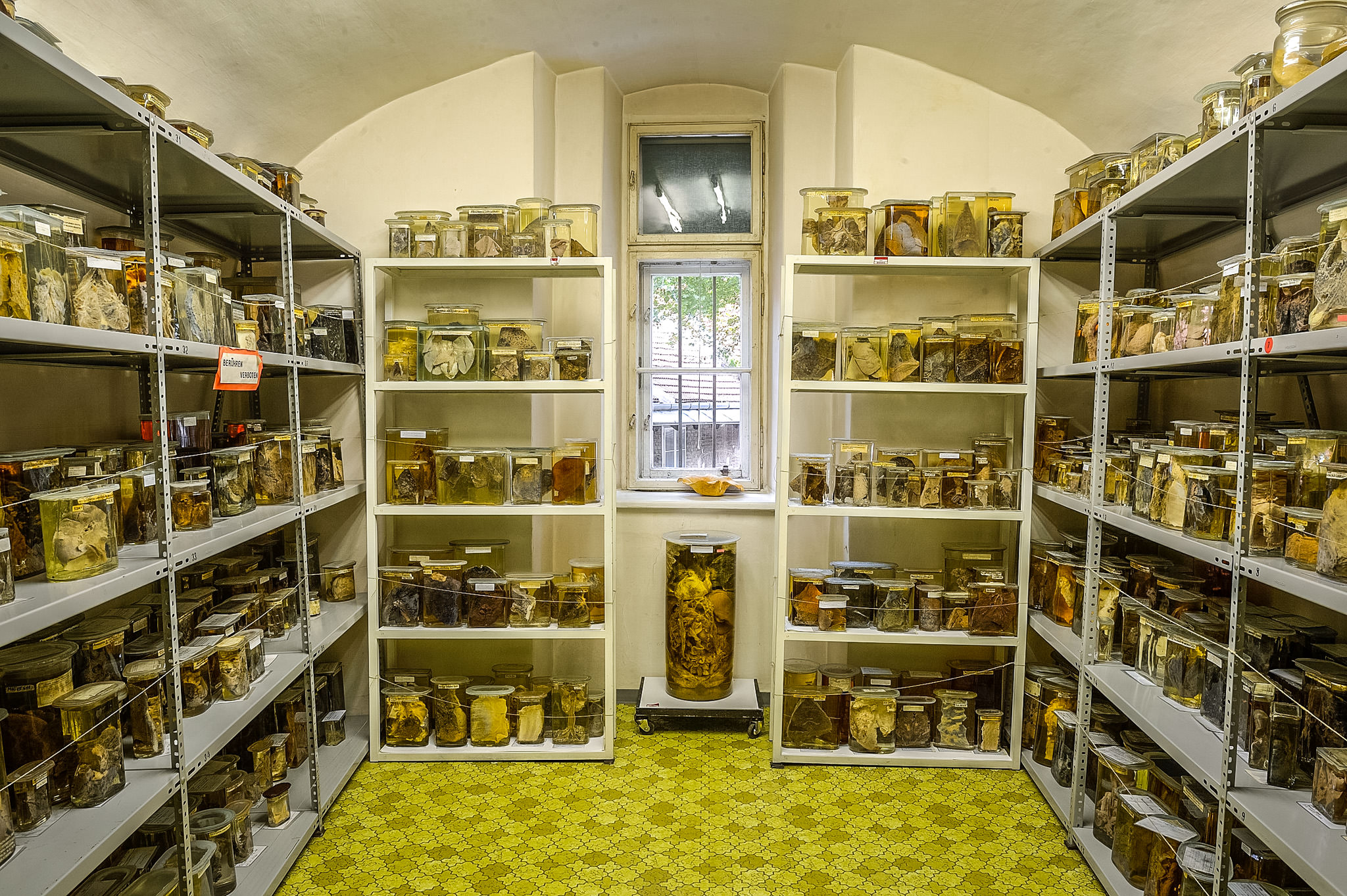 Here are all kinds of malformations of various organs both in naturalistic looking wax moulages and in alcoholized preparations. You will see things that not every pathologist can see in his practice: fetuses and babies with all kinds of deformities, organs, affected by various terrible diseases, helminthes and other less aesthetically pleasing things and phenomena. 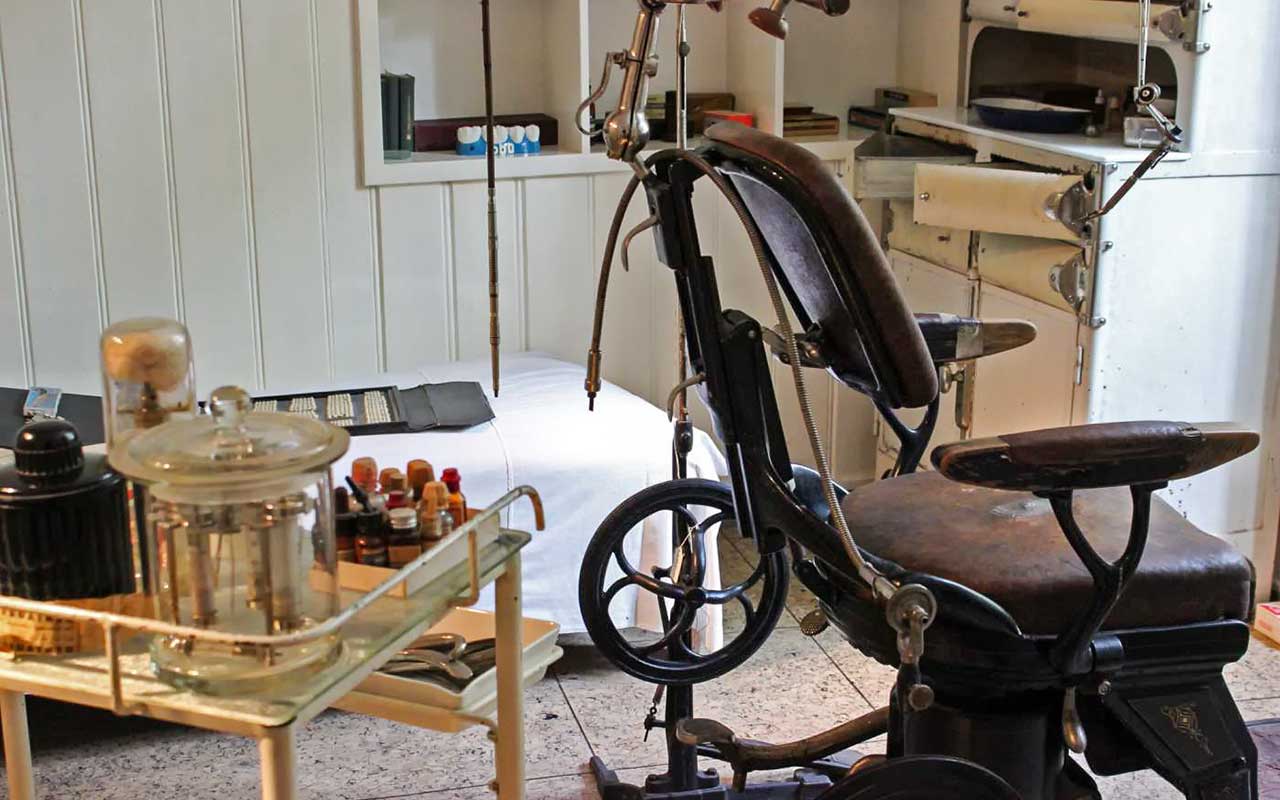 There are also surgical instruments from different eras, resembling instruments of torture, by which one can trace the evolution of this branch of medicine. Dental and gynecological chairs and other equipment from medical offices of the past are also on display. 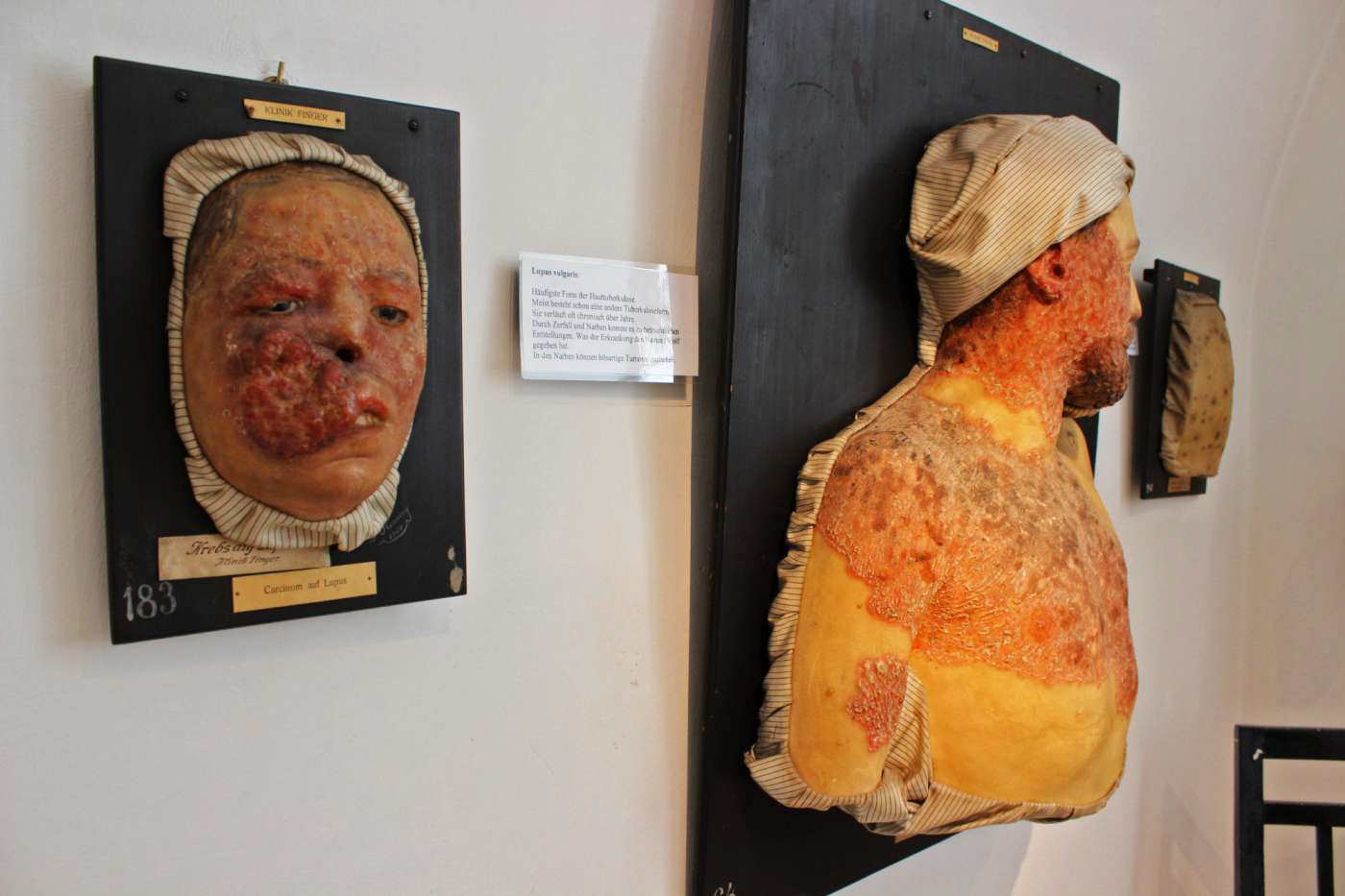 You can also get acquainted with the gruesome history of the Tower of Fools and the inhumane conditions in which the mentally ill were held, examine the wards, which look more like prison cells, with chained figures depicting unhappy patients. There is a morgue room recreated in all realities and a pathologist’s workplace.

It is strictly forbidden to take photos or videos in the halls of the museum. But if you want to refresh your memory of what you see, you can buy a catalog with color photos.

The Vienna Pathology Museum, known in Austria as the Tower of Fools, is located near the center of Vienna, on the campus of the university.

The attraction is located at Spitalgasse 2, Vienna 1090, Austria.

The easiest way to reach it is by subway, taking the U2 line to Schottentor station. You can also take the streetcar on the ring road to the stop Votivkirche, and then walk a short distance. 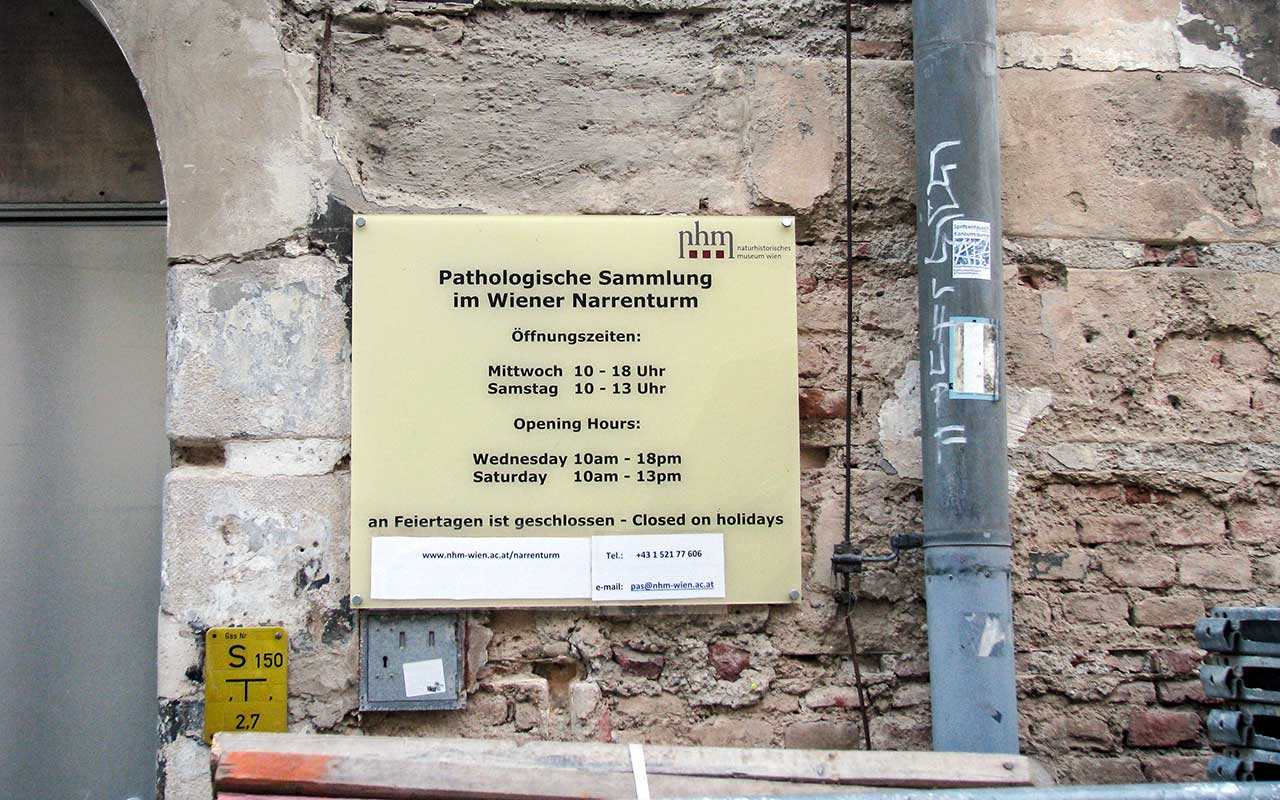 The tower of the madmen (Vienna, Austria) is open to the public only three days a week:

The price of the admission ticket is €2 and entitles you to visit only the halls of the first floor. For those who want to see the rest of the exhibition with a guided tour, the cost of the ticket will be €4 per person. 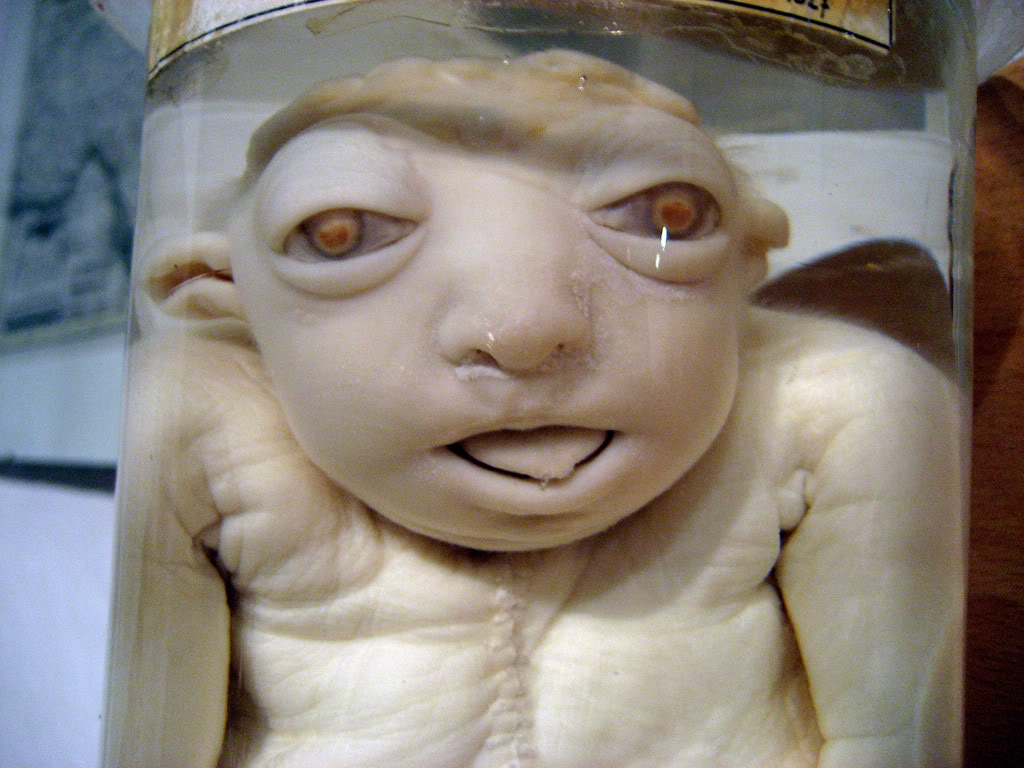 More information about the Tower of Fools in Austria can be found on the official website of the Museum of Pathology of Vienna: www.nhm-wien.ac.at/en/museum.

A visit to the Austrian Museum of Pathology, located in the architectural and historical monument of Vienna, known as the Tower of Fools, does not guarantee a pleasant experience. But there is no doubt that it leaves no one indifferent.

Updated: 2 May, 2020 Museums in Oslo are sure to delight history buffs and…

Updated: 22 May, 2019 Prague’s museums are some of the most interesting and…

Updated: 8 Oct, 2018 The Van Gogh Museum is one of the most important attractions…

Updated: 23 Apr, 2018 Since 1996, the Organization for Economic Cooperation and Development… 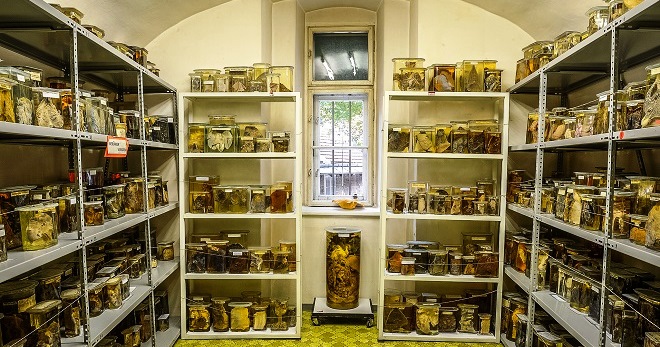 There are a large number of places in the world that are capable of putting people in a panic. In Austria, such is the Tower of the Insane (Narrenturm), located in Vienna, which is the Museum of Pathology (Pathologisch-anatomische Sammlung). This is one of the most frightening places in the country, which visitors will never forget.

Do not look at it for the faint-hearted

The Tower of the Insane is a gloomy building built in the 18th century by Emperor Josef II to house the mentally ill and violent patients. The architecture of the building is quite sinister and reminds one of a scene from a horror movie. The museum exhibit includes dissected skulls, spirited babies, floating brains, etc. Such objects rarely arouse aesthetic feelings in anyone.

The collection was begun in 1796 by order of Emperor Franz II. For two centuries, it has been enriched with interesting exhibits, some of them of historical significance. For example, the head of the man who murdered Elisabeth of Bavaria (Sisi) is on display in the museum. The Museum moved into the Tower of the Insane in 1971. 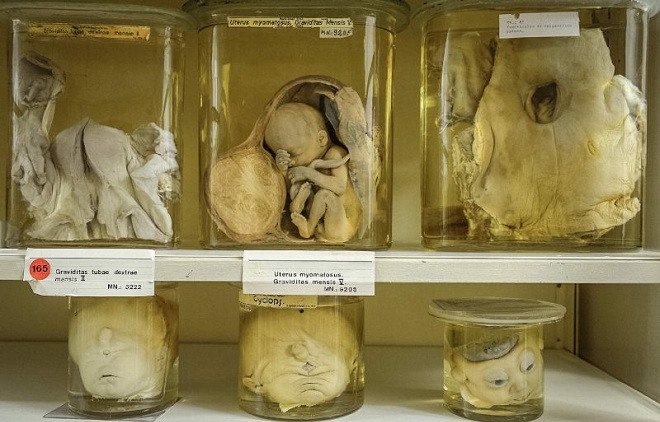 The strangeness of the treatment.

The five-story building had 139 rooms, which had powerful doors and resembled cells fitted with strong iron chains. This circular building was unparalleled in Europe, but Austrian doctors were in no hurry to apply modern methods of treatment. Joseph believed that water could worsen the condition of the insane, so they did not install plumbing to the building. Instead, the emperor ordered the construction of a lightning rod, which was one of the first on the planet.

Some scientists believe that it could have been used to treat patients with electricity. The hospital mainly housed soldiers, who were held as if in prison. After a few decades, the clinic lost its original functions. It began to be used as an inn for nurses and doctors engaged in research. They were in constant need of people for that purpose, so the tower began to be used to bring in terminally ill patients. 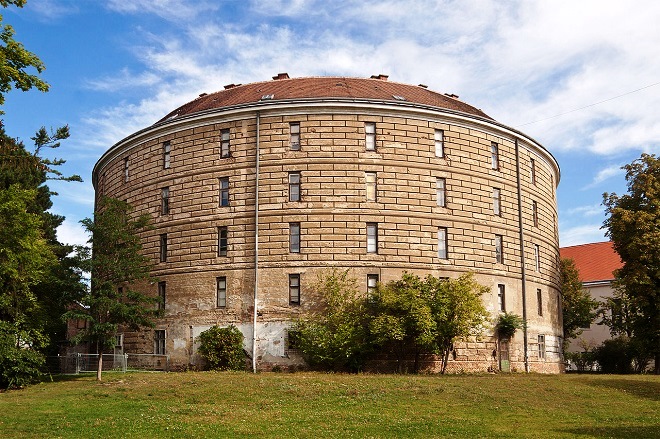 Nowadays, organs and human body parts are stored in the museum. They have been spun in special vessels and have various gene mutations, as well as demonstrating all sorts of abnormalities and the consequences of diseases, including venereal diseases. The last exhibit is particularly impressive for people who are sexually promiscuous. In total, there are more than 4,000 exhibits, among which it is worth highlighting:

Visitors are invited to walk through the chambers, where they can appreciate the importance of mental health. Special attention in the museum is given to the terrible consequences that occur after the use of chemical weapons. These exhibits date back to the years of World War I. 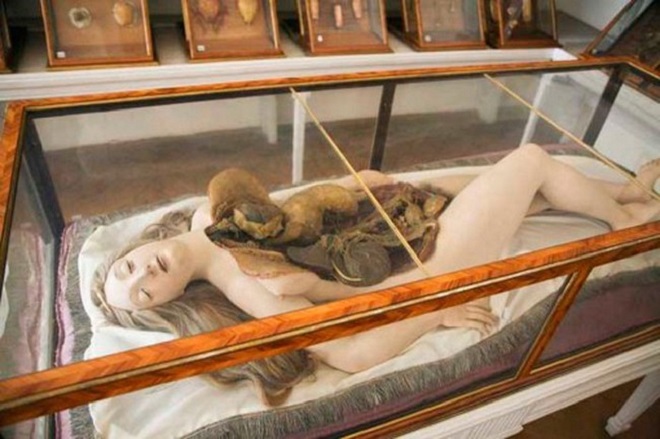 The mystery of the tower

Originally, the building housed a valuable sculptural composition of Laocoon and his children, made from real animal bones. It demonstrated the hero’s struggle with snakes. Many researchers believe that human bones were also used to create the statue. During World War II, the building was bombed, which destroyed the masterpiece, so it is impossible to prove today what it was made of. A copy of the monument can be seen at the Vatican. 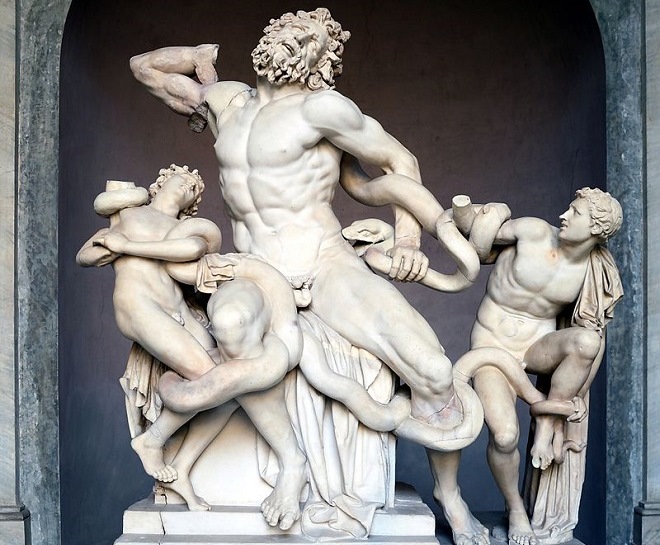 Peculiarities of the visit

The museum works only 3 days a week: on Wednesday from 10:00 to 18:00, on Thursday and Saturday from 10:00 to 13:00. The cost of admission is € 4, children under 19 years old are free. The Crazy Tower is considered one of the scariest places not only in Vienna, but in Austria, and the photo exhibits horrify all visitors. It is recommended to come here unimpressed people with a stable psyche. 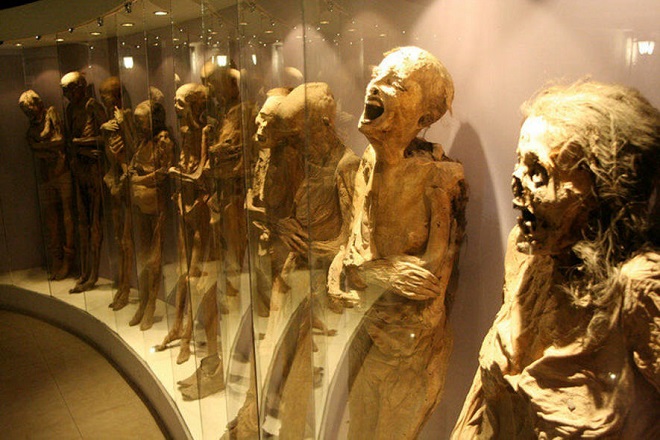 How to get here?