What to see at London’s Museum of Public Transport

Interesting facts, costs to visit, and other useful travel information about London Museum of Public Transport.

Few cities in the world, London among them, can boast a world-famous transportation system. Such popular phrases as “Mind The Gap”, as well as the presence on numerous mugs, towels and other London souvenirs of the subway map indicated that soon the British capital should open a museum, in which the focus will be on transportation.

And so it happened. The London Transport Museum has existed since the 1920s and has more than 450,000 exhibits covering 200 years of the history of the local transportation system. Walking through the galleries, visitors can learn more about the connection between the growth of modern London and its world-famous transportation network. The exhibit is not limited to historical exhibits, as it also covers concepts of modern and even futuristic transportation.

Where is the Transport Museum

It was originally housed in an old bus garage in Clapham and displayed two Victorian horse-drawn buses as well as an early motor coach. Over time, the museum expanded and eventually moved to the Victorian Flower Market building, which is in the historic Covent Garden district. It was then the British Transport Museum, but it was soon renamed the London Transport Museum.

The museum is located on two floors. On the first floor are the most interesting exhibits, including one of the earliest wooden subway cars. On the second floor, visitors can see many transportation artifacts and learn more about the construction of London’s first passenger railroad, dating back to 1883 (lasting from London Bridge to Greenwich).

Interesting fact! Even the entrance to the building is an attraction, as visitors are greeted by audio-visual recordings of the transportation system from around the world (e.g. New York, New Delhi, Tokyo, Paris, Shanghai and, of course, London). There’s also a library (located at 39 Wellington Street) and exhibits that tell the story of the famous London Underground logo designed by Frank Peake.

Younger visitors will especially enjoy the All Aboard play area, which boasts many different miniature vehicles. Kids can also repair a small train, sail the Temps Nipper, and play musical instruments in specially equipped entertainment areas.

Other popular exhibits are:

By purchasing a ticket you can get unlimited day passes to all galleries and exhibitions for 12 months.

Parking at the museum costs 440 GBP per hour (for a maximum of 4 hours). 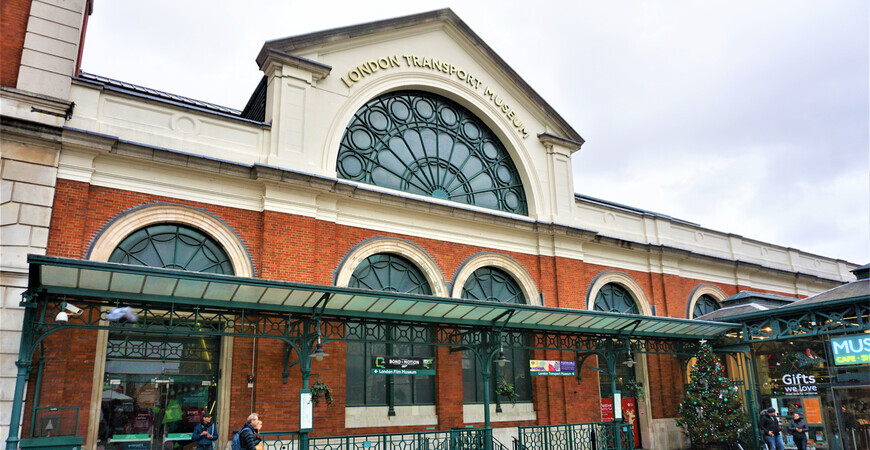 The London Transport Museum in Covent Garden tells the story of public transport in London and exemplifies the frugality that the British think so highly of their everyday lives. Thanks to it the means of transport of the past two centuries, which are long out of use and no longer be necessary, do not become trash, but act as museum exhibits.

London transport has a pretty rich history, which the museum shows to casual tourists. There are the famous omnibuses from the Sherlock Holmes period, the famous Rutemaster double-decker bus, the world’s first subway and much more. The main part of the collection is represented by the exhibits of London Transport, after the association Transport for London was founded in 2000, the scope of the institution was expanded, so at the moment the exhibition covers all aspects of urban transport.

The museum (at its current location) opened in 1980, and 25 years later it was temporarily closed for renovation, which lasted two years. All public affairs were given to the institution’s curator, Oliver Green, who is actively adding a variety of items to the museum’s collection that come out of use on the city’s routes.

READ
House of Butterflies at VDNKh in Moscow, photo and description

Creation of the museum

The emergence of urban public transport is a fairly recent phenomenon, 200 years ago such a concept did not exist, but that short period of time allowed streetcars, buses and trolleybuses to enter our lives, so at the moment no city can not imagine its existence without them.

In 1920, the London Omnibus Company had the idea of leaving a couple of existing Victorian horse-drawn vehicles and the first few engine-driven buses for future generations. This is where the London Transport Museum began.

Later, in the 1930s, the collection was enriched with examples of rail vehicles: horse-drawn streetcars, trains, and subway cars. Thirty years later, the institution was housed in the old Clapham Bus Park in the south of the city, and in the 1970s it occupied Zion Park in west London. It wasn’t until 1980 that the museum moved to its current abode, a 19th-century cast-iron structure with glass inserts. Previously, there was a wholesale market offering customers vegetables, fruit and flowers.

The museum now occupies two sites within the city. The main room is located in Covent Garden, the other site was moved to Acton, it is the warehouse of the London Transport Museum and stores exhibits, however, sometimes it opens its doors to the public.

Enter the museum through a glass pavilion, the frame of which is made of iron. The building of the institution is small, especially compared to the Museum of Technology in Speyer, but it was able to accommodate most of the urban transport.

The institution’s collections number over 370 thousand items, which can tell the story of London’s public transport. The most ancient models occupy the third floor; here the guests get acquainted with numerous carriages, horse-drawn carts, omnibuses, the famous double-decker London buses. On the second floor is placed the city’s underground transport, as well as the world’s first subway.

By the way, the birthplace of the word “subway” was England, it quickly began to be introduced in other languages, nevertheless it could not take root in English. In the land of oatmeal lovers, the words “subway” or the more colloquial “tube” are more commonly heard.

The subway in London appeared in 1863. There were no windows in the subway cars at the time, as the locomotives were heated with coal. It was not until 30 years later that they began to use electricity. The first cars had an iron base, but wood was used to build them. The first class cars were equipped with soft seats and two gas lamps in each compartment. For the second and third class there were fewer conveniences – the seats were hard, and gas lamps were twice as rare.

In the 1920s iron was replaced by wood and the cars lost their former beauty, but became distinguished by their reliability and modernity.

In the same hall you can see a model depicting the construction of the subway: first, an impressive pit was dug, rails were laid, and then a tunnel was built and buried again. Visitors can see with their own eyes how difficult the manual labor of those times was.

Getting acquainted with the land transport begins with a horse-drawn carriage: people got to the second floor of the carriage through the winding stairs, in front of the carriage was a team of horses, and the carriage moved on the rails. There are also a variety of old wagons and carriages, cabs and streetcars that were built in 1870 for the working class.

The museum is also attractive because most of the exhibits are interactive: all of the vehicles on display can be touched, levers can be switched, pedals and buttons can be pressed, and the driver of the underground train can be steered and act as a simulator.

Subway cars and bus cabins in the museum are equipped with wax figures of passengers of those times, some of them speak appropriate phrases, and horses will delight you with their sounds. The whole installation as a whole will allow you to become part of the atmosphere of the past.

With the advent of World War II, London and a number of other important military and industrial centers of Britain were under fire from Luftwaffe planes, a separate room of the institution tells about this stage of the war. At that time, most of the subway stations functioned even during the raids. Residents who lost their homes to bombing took refuge there, and with each air attack, the subway became a bomb shelter as well.

During the war there were no lights on the buses, which allowed them to be more invisible to the enemy. Screens were stretched over the windows to protect the passengers from splinters of an accidentally exploded bomb.

In 1954, the world’s most recognizable bus, the Rootmaster, was born and became the most striking symbol of London. The Rootmaster had no doors and was entered and exited by means of a platform at the rear of the bus, so the salon was equipped with a controller. He took the fare, also helped the elderly people up the steps, and entertained the passengers with current news and jokes.

In addition to technology, the museum offers a variety of objects related to London transport. There are many fares, route maps, advertisements and photographs, and there is also a room telling about the design on the London Underground.

Younger visitors to the museum will be interested in a number of toy models of trains and buses, located on the first floor. There are also information terminals, they will help the most inquisitive get acquainted with the interesting details of the history of transport in London. At the end of the tour guests find themselves in a souvenir store with the widest selection of miniature streetcars, trains and buses, as well as other souvenirs.

Discover how to get to the London Transport Museum

You can get to the museum by subway, in which case you should get off at Covent Garden station. Also near the institution are stations Leicester Square, Holborn and Charing Cross, if you want to walk you can get off at them.

On your own get to the place by the highway A4, the whole trip takes about five minutes if there is no traffic jam.

Uber cabs will also help get you there, but with more comfort in comparison with public transport.