Tristan da Cunha is the most remote island from civilization

This volcanic island can be safely called a paradise for introverts, as the nearest civilization is thousands of kilometers away. Therefore, there is something adventurous and appealing here.

The island of Tristan da Cunha is nestled in the heart of the southern Atlantic Ocean.

The nearest land is St. Helena, 2500 km to the north. The closest mainland is Africa, and its southern part is the Cape of Good Hope almost 2,800 kilometers to the east.

A little about the island and its history

What is Tristan da Cunha

Tristan da Cunha is a British Overseas Territory, but with its own constitution.

The island was discovered in 1506 by the Portuguese navigator Tristan da Cunha (Tristão da Cunha) on his way to the Cape of Good Hope. But the first study of the archipelago was conducted by the crew of the French corvette Heure du Berger only in 1767.

The first permanent resident of the island was Jonathan Lambert from the United States, who moved here in December 1810 with three other men.

Unfortunately, three of the four residents died in 1812. In 1816 the island gradually began to be inhabited. By 1824, the population was already 25 people.

Who and how lives here

Now the population of the island is about 250 people.

An interesting fact is that today there are only 9 surnames on the island. Collins, Glass, Green, Kagan, Lavarello, Repetto, Rogers, Squibb, and Swain. 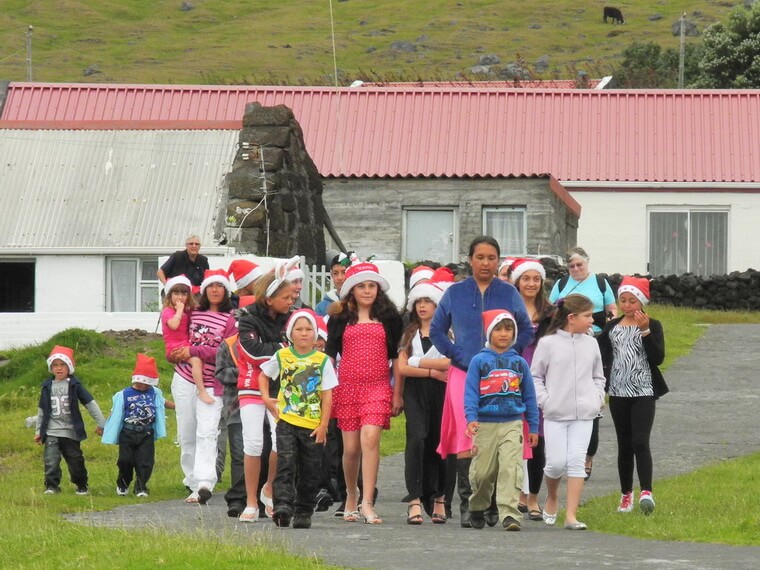 Naturally, all of the islanders know each other.

The island’s community is so tight and small that even its official website lists such details as the birth or death of a local resident. 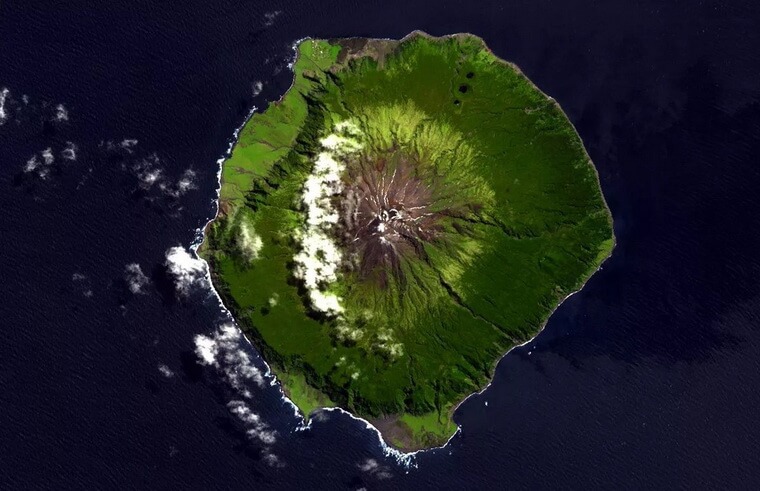 This is a classic volcanic island

The shape of the island is close to a perfect circle with a diameter of about 11 km and an area of about 98 km2 .

The island has no airstrip. So you can get here only by sea. And it is not less than 7 days’ journey from Cape Town in Africa. Usually ships arrive on the island about once a month.

On the island there was a unique socio-economic structure. All families here live on farms, and all land is collectively owned. Outsiders are not allowed to buy land or settle on the island. 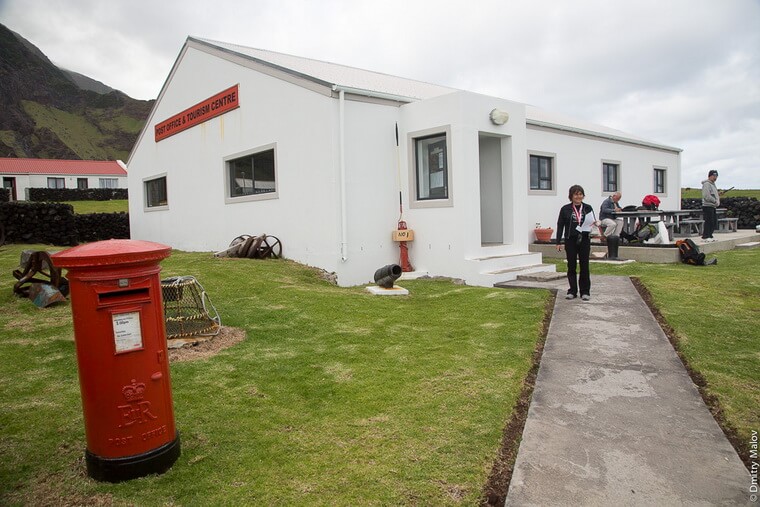 Despite the fact that the island is quite small and extremely remote from the outside world, there is a lot to see here.

Edinburgh of the Seven Seas 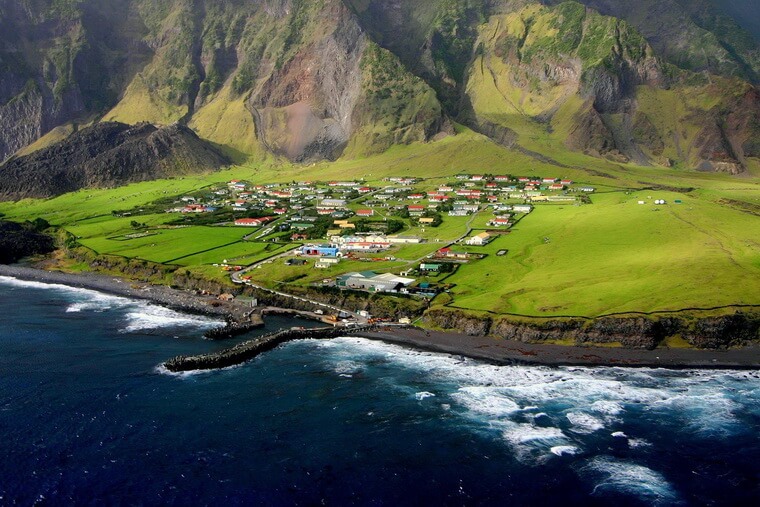 The settlement was named after Prince Alfred, Duke of Edinburgh, the second son of Queen Victoria. The prince visited the island in 1867.

Edinburgh of the Seven Seas is the name of the capital of Tristan da Cunha. It is not only the largest settlement on the island, but also the only one (not counting some outlying houses). By the way, why exactly the “seven” seas, we do not know. As you can imagine, the main attractions of the island are located here. 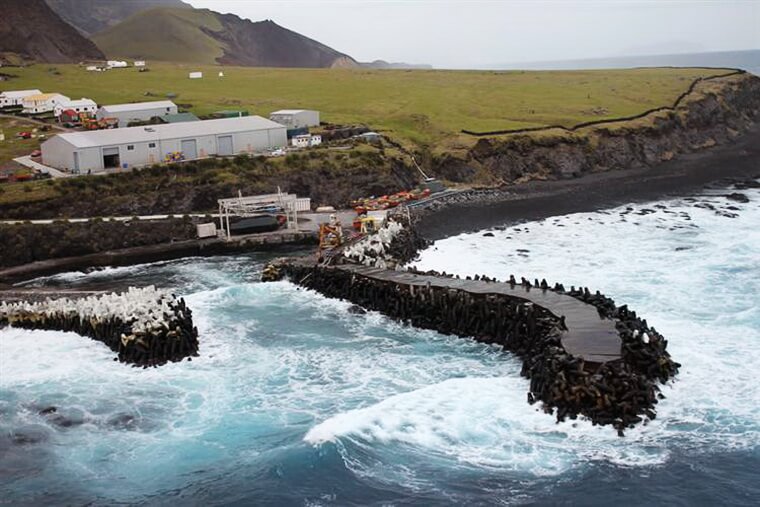 This is the only place where you can get to the island.

Calshot Harbor and Port is named after an English village in Hampshire. It began operations in 1967. The harbor is connected to the main village by Puma Road. Next to the harbor is a small fish factory, a marina, and Great Beach. 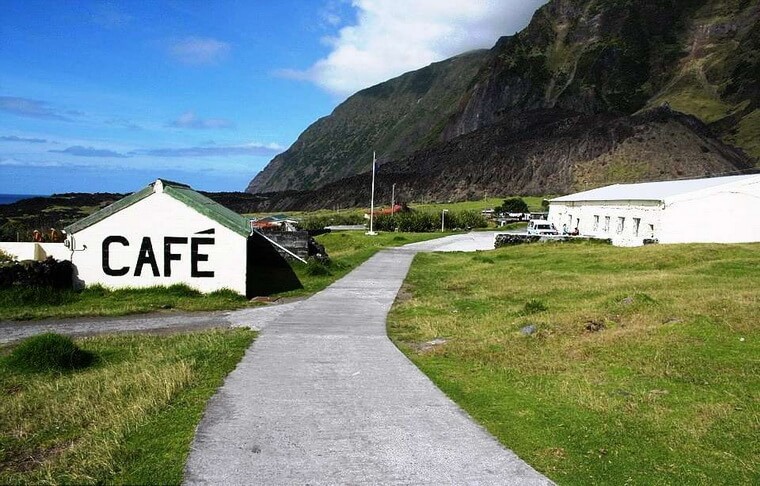 It would be hard to walk past and not notice.

This cafe is the perfect place to grab a bite to eat and experience the local culture. It serves not only food and drinks, but also stories about the history of the island.

The cafe is located in the post office in the tourist center of the island. 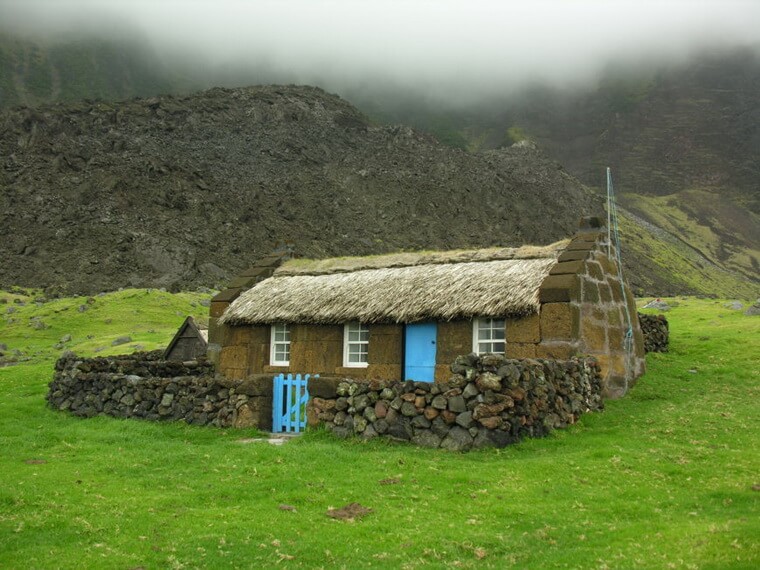 It is probably the only thatched roof museum in the world.

It is a hut built from volcanic rock and covered with thatch. The museum sits between the volcanic lava fields and the main village.

The thatched roof gives the house an authentic rustic look. Inside, the museum is finished with wood that was carried by the sea after shipwrecks. 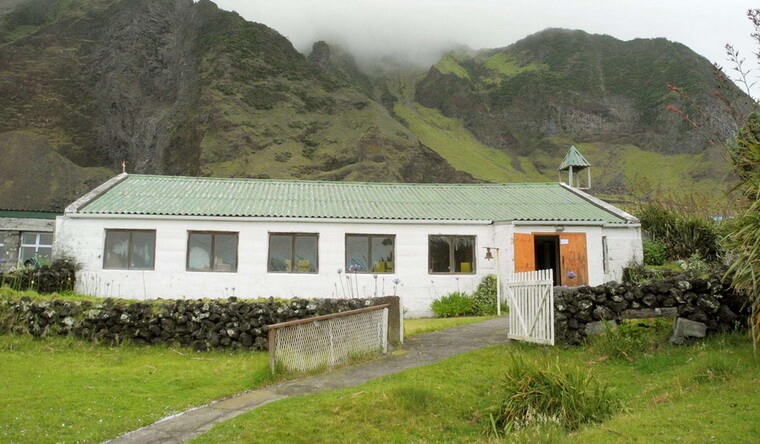 It is not much different from the ordinary houses of the island.

Built in the typical Tristan architectural style, it was opened to the public in 1923. It was expanded in 2005.

The church has a bell, salvaged after another shipwreck, as does the thatched-roofed Museum wood.

The church is enclosed by a low wall made entirely of volcanic stone. 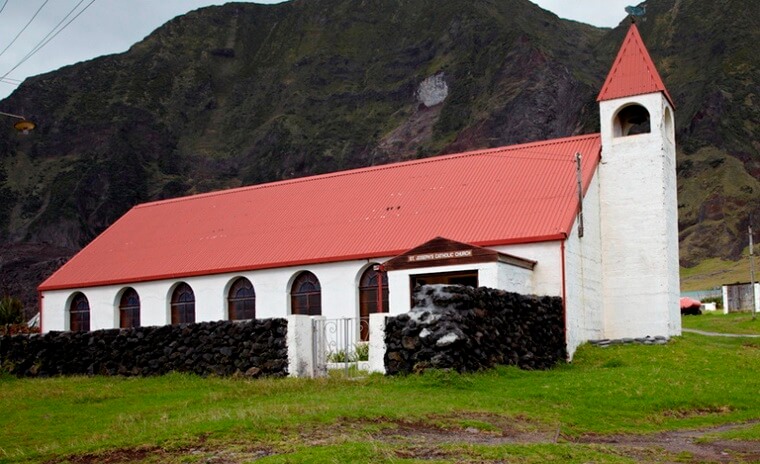 The church was built in 1996. The Catholic faith was brought to the island by two sisters of Irish descent. They married local men, and now their descendants are the island’s most active Catholic community. 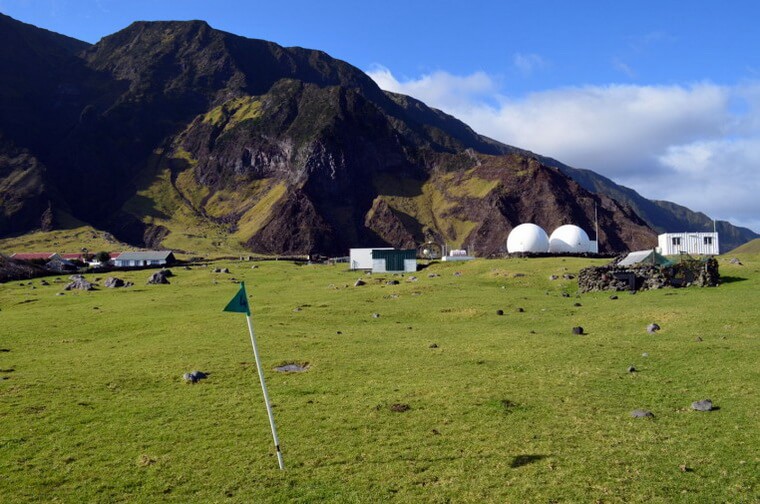 You have to agree, it’s unexpected to imagine that a golf club exists on a remote and sparsely populated island. But there is.

The area of the Golf Club is filled with many volcanic boulders, and it is quite difficult to play among them. Every year an open golf championship is held on this course. 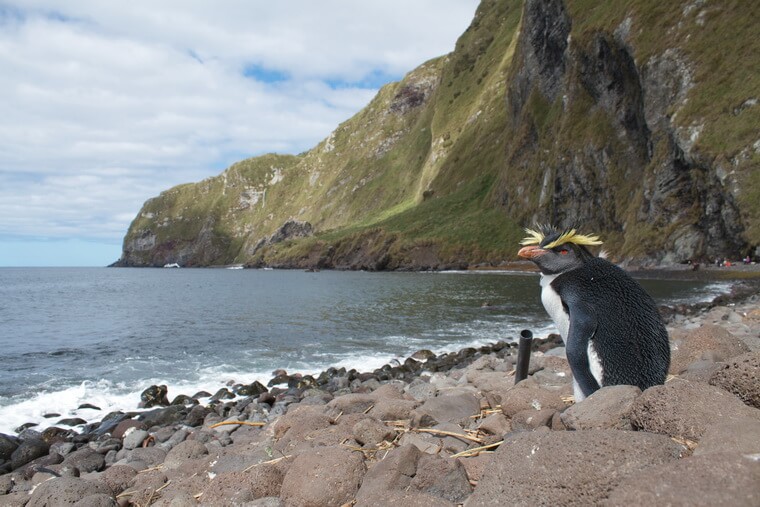 On the coast of this island you can see rockhopper penguins

This island is about 40 km southwest of Tristan da Cunha. Although it is called Impregnable, it can still be visited. 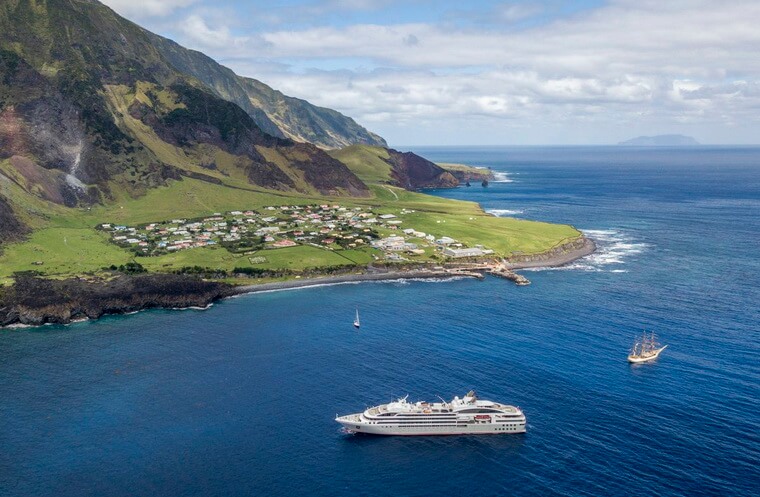 Even cruise ships sometimes sail to the island.

It is advisable to bring a guide. You should also bring food and water, because the island is uninhabited.

As the name suggests, Love Island is a place for couples in love. In fact, it is not a separate island, but only a separate section of the island of Tristan, located in the very center of the island.

The highest point of the island, Queen Mary’s Peak, offers an amazing view of the lake, which has an almost perfect heart shape. 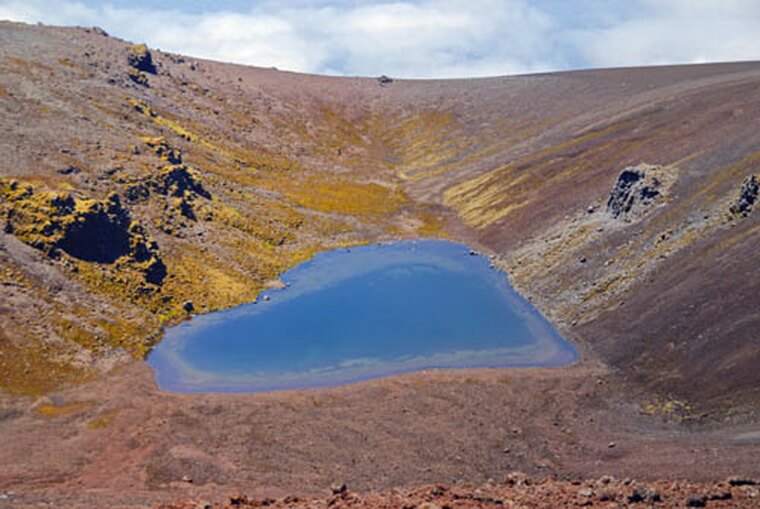 This lake is also named after Queen Mary.

However, the ascent to the 2,062-meter peak is not an easy one. It is best to climb to the top in good weather conditions. Ideally, it is worth hiring a local guide.

The eruption of the volcano in 1961 forced the islanders to flee to Great Britain. Many of them later returned. 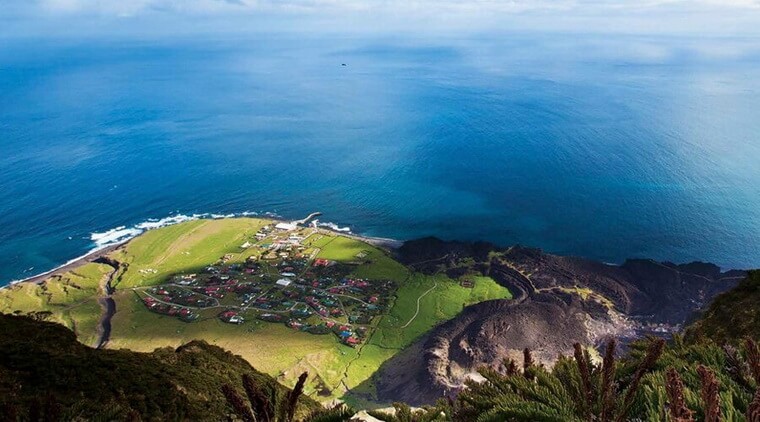 There are now hiking trails leading to the summit. It’s a great place for a quiet getaway.

This is the easternmost coast of the island about 12 km by sea from Edinburgh Seven Seas. It features a black volcanic sand beach lined with low cliffs and a gentle plateau.

Tristan da Cunha is the most remote inhabited island in the world, with no cell phone or Internet If you’ve ever wanted to go to a place where you don’t see anyone and no one bothers you, Tristan da Cunha might be the perfect choice. This wonderful island is the most remote settlement from the continents, and in general, from other populated places on the entire planet. There is no airport, so it will take you weeks to reach Tristan da Cunha. Officially Tristan da Cunha is not an island, but an archipelago, and is located somewhere in the middle between South America and Africa, but just a little further south, where there is nothing around. The entire archipelago, along with the main island of the same name, is part of the British Overseas Territory, which means that all islanders are British subjects. Tristan da Cunha itself is essentially a huge volcano . On the north-west side of the volcano is a small valley with the only town, or rather village, for a few thousand kilometers around. This settlement in the XIX century organized immigrants from Europe, calling their new city extremely poetically – Edinburgh of the Seven Seas (Edinburgh of the Seven Seas), but locals simply call their city “settlement”.

The settlement has about 270 residents. There is no cell phone connection on the island, the Internet is only available at the only Internet cafe in the settlement, and because of the high cost the residents use this type of communication only for some emergency messages. Fish boats coming from South Africa sometimes come here, but it happens 8-9 times a year. No one comes here much anymore, except for the desperate travelers who reach the island on their own. The island has its own small cemetery, where locals can find relatives for several generations back.

Almost all locals can trace their genealogical tree back 15 generations to the 8 men and 7 women who came to the island to found Edinburgh of the Seven Seas. The men were all white Europeans, and the women were either mixed race or black from Africa. Today’s islanders, in fact, are almost all related in one way or another. They have a limited number of last names, and everyone knows each other. Here they don’t lock their doors or even use locks, except in large warehouses and stores. In 1961 the settlement had to be urgently evacuated because of an awakening volcano, so that when two years later residents returned to the island, several women returned with new husbands “from the mainland. A little earlier, in the early 1900s, some Slavic man had also arrived here on one of the ships that passed by, but as the island’s history suggests “he left his genes here, but not his name.” There is only one doctor (and no nurses) on the island, who has to serve more than 260 residents. So when surgeries are needed, or when birth complications are expected, patients are transported by fish boats to Cape Town. The town has its own newspaper, it is called “The Village Voice,” and on the Internet you can also find the website of the island – www.tristandc.com, which is true, it is run by British residents. In this video, the presenter traveled to the island by boat for a long three weeks. On the island he rode the only bus, visited the fields with potatoes, met the locals, learned how they live and how they differ from the rest of Britain’s subjects. Off the coast of Iceland there is a small island called Edlyday, on which stands a lonely house. Read about who lives there in our article, “The Mystery of a Desolate Island in Iceland.”