Troll Road (Norway) is one of the many natural attractions of the country. Due to its history and unique landscape, the trail is considered the most popular Norwegian hiking route. The harsh landscapes of Scandinavia, steep descents and ascents – that’s what tourists from all over the world come for in the summer time. 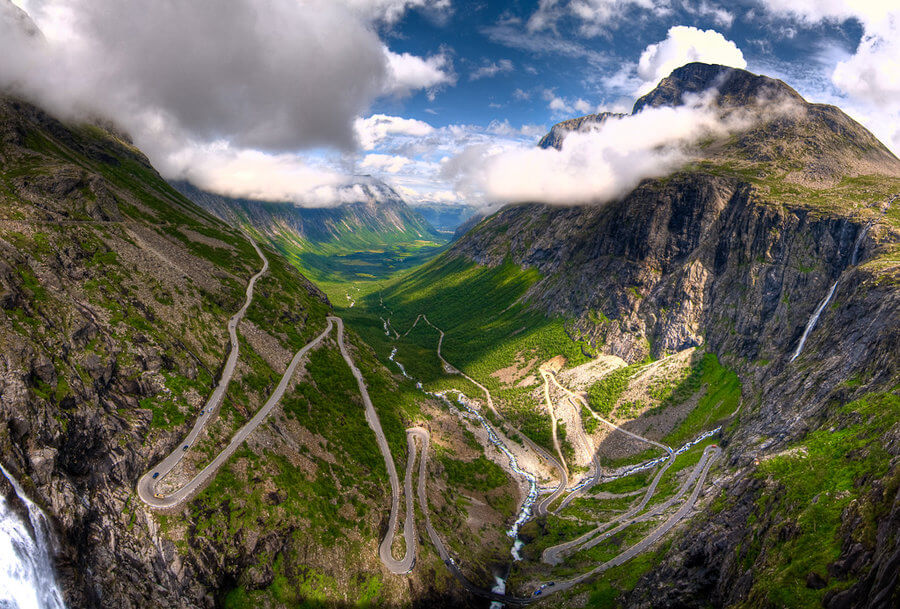 What is the Troll Trail famous for?

The trail, known to the world as the Troll’s Ladder in Norway, is actually part of Norwegian County Road 63. The section we are interested in connects Oldansnes and Valldal. The towns are in two different valleys that have been separated for centuries by gorges and mountain rivers.

Troll Stairway residents of Norway themselves call Trollstigen (Trollstigen). The road is located in the south-west of the country in the region of Vestland. The route stretches for 106 kilometers and is a narrow highway-serpentine with 11 sharp turns. The sides of the road are fenced with small fences made of natural stone. The highway is so narrow that in some places it is up to 3.3 meters wide. Driving on such a road is not for the faint of heart. But the locals are quite easy to get around even the steepest turns, albeit slowly.

But tourists are interested not only in the trail itself. Driving along it, you can appreciate all the charms of wildlife in Norway. The picturesque views of hills and fjords, park areas and sharp cliffs will not leave anyone indifferent. Troll Trail can safely be called a harmony of nature and architecture. Although the trail is man-made, it blends into the local landscape incredibly organically.

History of the creation of the Troll Road

The construction of the road, which would connect the cities and settlements of Norway between the gorges and allow the comfortable movement between them, was conceived back in the XIX century. The need arose because of the difficulty of moving between Valldal and Rumsdalen, where the largest fair in the region was regularly held. 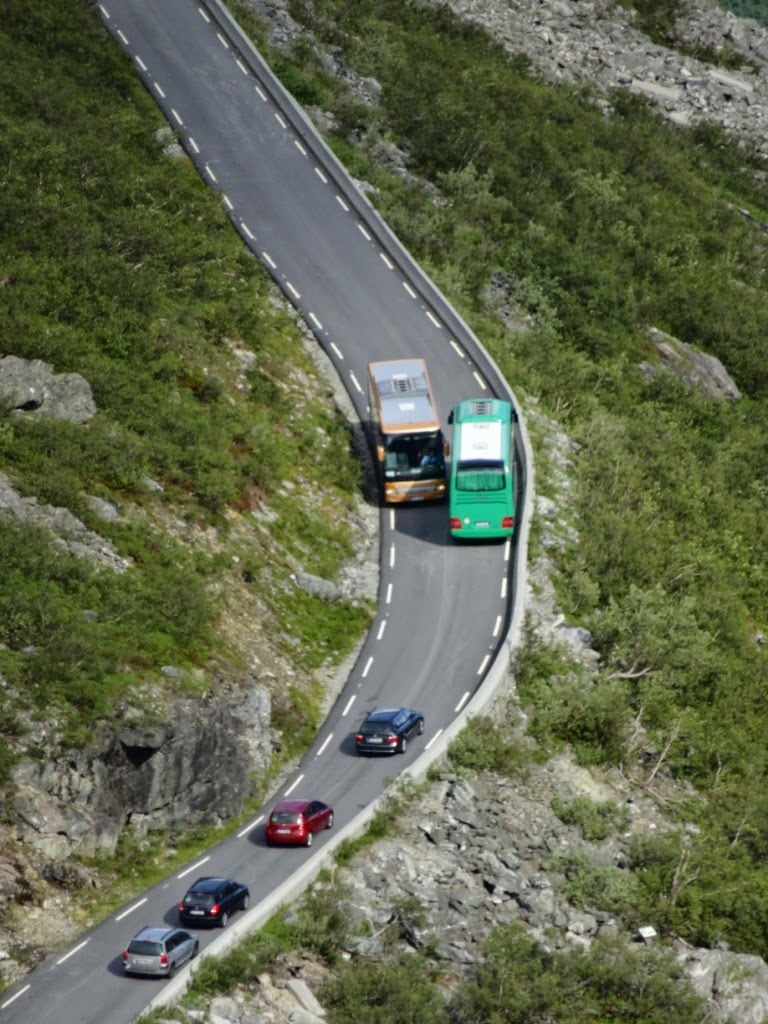 The first project saw the light in 1894. But it never materialized due to the difficult terrain and the belief of the local authorities that it was impossible to build such a complicated road. Only at the turn of the century the road began to be built and was completed in the 1930s, during the reign of Håkon VII.

Now the route is notable for its perfectly flat surface, as are most roads in Norway. The popularity of the Troll Staircase among travelers necessitated the construction of a visitor center, observation deck, cafeteria and souvenir shops near the trail. These structures were erected at the top of the climb.

Interesting facts about the Troll Trail

What to look out for when traveling along the road?

In addition to the uniqueness of the road itself and the incredible views it affords, there are two places to visit that are located along the route of the trail. About halfway up, at the highest point of the trail, there is a parking area with stores, a restaurant, and souvenir shops. It is from here that you can get to the main attractions of the Troll Staircase.

READ
Henningsver and the stadium among the rocks of Norway. Description, photos.

It offers a view of the serpentine track, only from here you can see its incredible curves and how organically it looks among the Norwegian hills. It is from this observation deck that most of the photos of the Troll Road in Norway are taken, of which there are so many on the Internet. But the place loses its appeal in bad weather, because of the high fog from the observation deck is not visible. Therefore, you should choose only clear days to travel along the Troll’s Road. 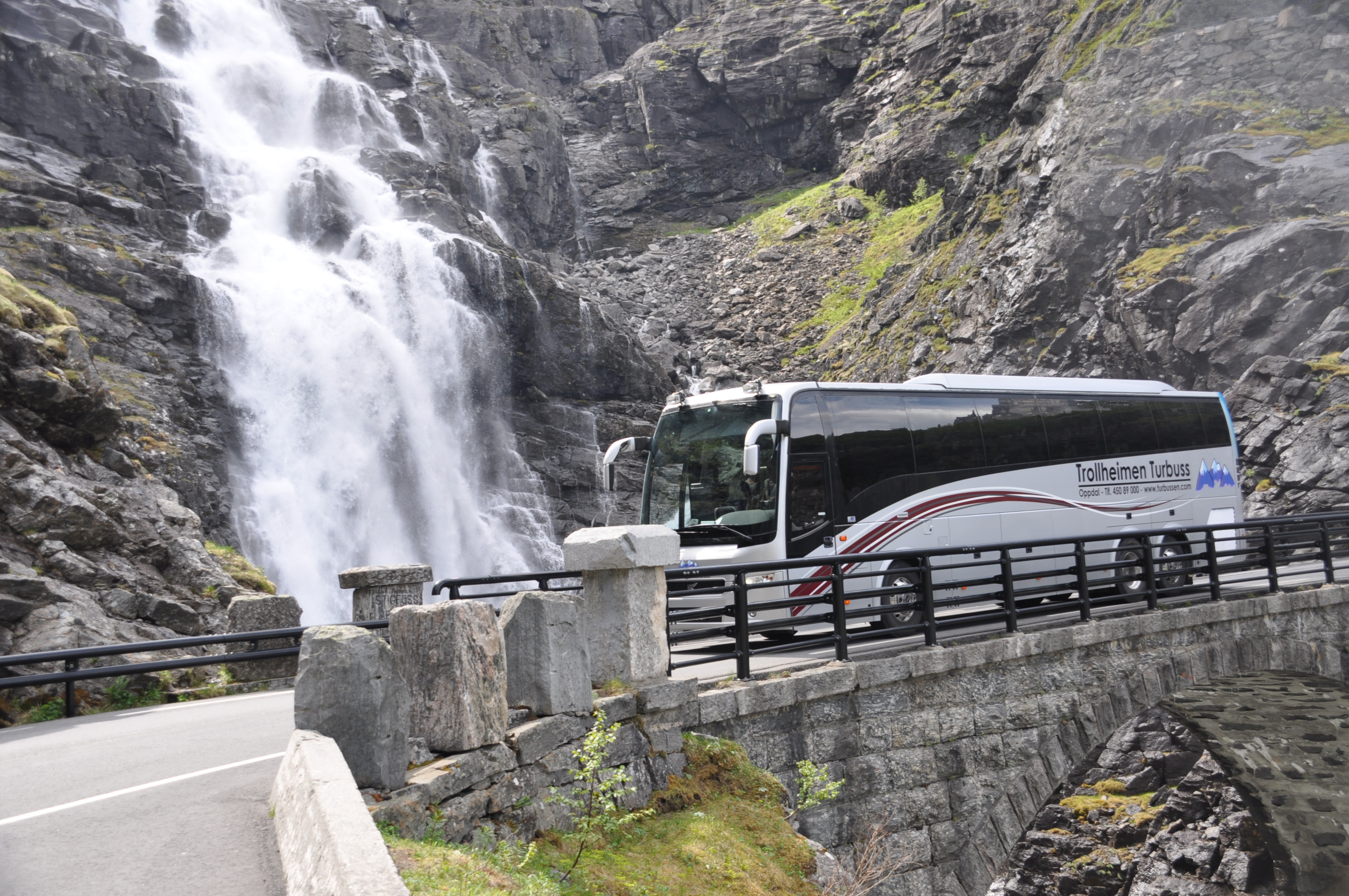 Not far from the observation deck is a bridge, where tourists have a view of a large mountain full-flowing waterfall. Its height is 180 meters.

For hikers, you can take a hiking trail down from the waterfall. Stigfossen is the most full-flowing in the spring.

How to get to the Troll Staircase?

Given the fact that in fact the Troll Trail is, albeit not quite normal, but paved road, it is best to go here by car.

A trip by car will allow you to slowly admire all the beauty that opens up from the road. You can rent a car in one of the major cities. But the independent travel has its own disadvantages. First, the danger of the trail for an untrained driver. Secondly, the high cost of renting a car.

If you drive from the north, not reaching Ondalsnes about 5 km, you need to turn to the highway fv. 63, which will take you to the desired mountain route. If your journey starts from Oslo, take the E4 or E6 to Lillehammer. From there take the E6 to Dumbos, where you turn off onto the E136, and take the fv. 63.

The driving route to the attraction and the places mentioned in the text are marked on the map:

The second option for traveling along the Troll Trail in Norway is by bus. Tourist buses on this route run from the Ondalsnes bus station. As a rule, the trip is accompanied by a guide and at the observation point the bus makes a stop of 25 minutes so that the travelers can look at the views and quietly take pictures of the Troll Staircase from advantageous angles.

You can also take the train to the nearest town and from there you can take a bus or car to the Troll Staircase. But still most passenger and tourist buses go from Ondalsnes. The cost of such a trip will cost from 1000 NOK (for the 2019 season).

Troll Road (Norway) is one of the most successful projects made together by man and nature. The result came out so organic that looking at the fact that the road is man-made, it seems as if it has been there for centuries. To see the crazy curves of the serpentine go tourists from all over the world. Once again, we remind you that you can see all the charms of the Troll Trail only in the summer months, because due to the complexity of the section most of the year the road is closed.

In conclusion, watch the video – not for the faint-hearted, but you can see the beauty of the area.

Updated: 28 June, 2018 The pearl of Ireland is rightly considered the Ring of Kerry -…

Updated: 24 Feb, 2020 The waterfalls of Norway are a fascinating natural phenomenon. Travelers are fascinated by…

Updated: 4 Jan, 2021 Oslo, the capital of Norway, is nestled between the Oslo… 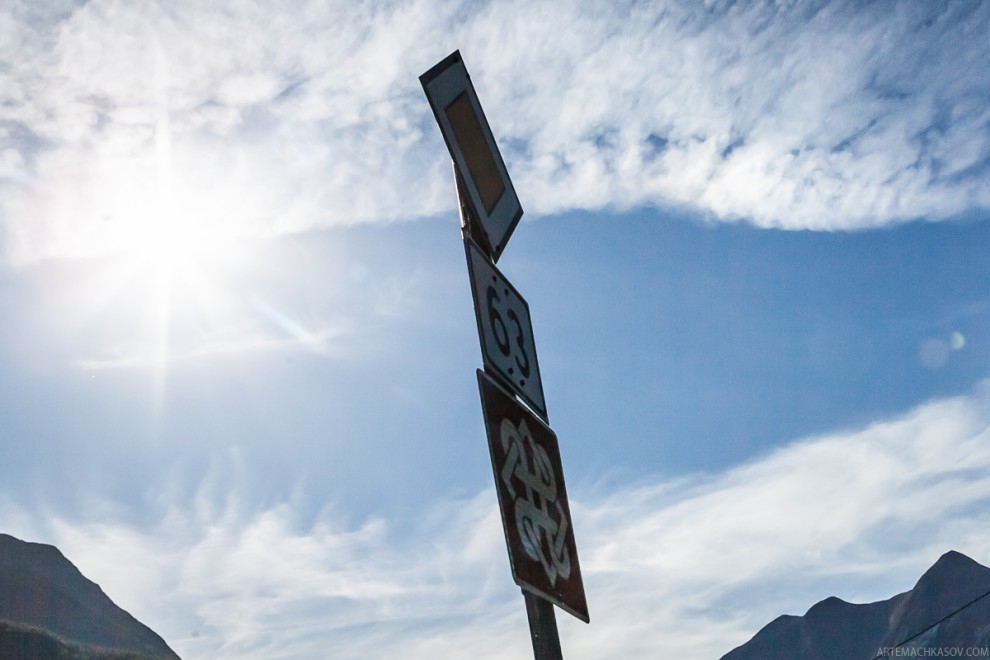 On paper, this road is just a 5-kilometer stretch of highway with a skimpy four-letter index RV63 somewhere in Western Norway. But for those who come here even once, these 11 turns will stay in memory forever. And not at all for the reason it seems at first glance. 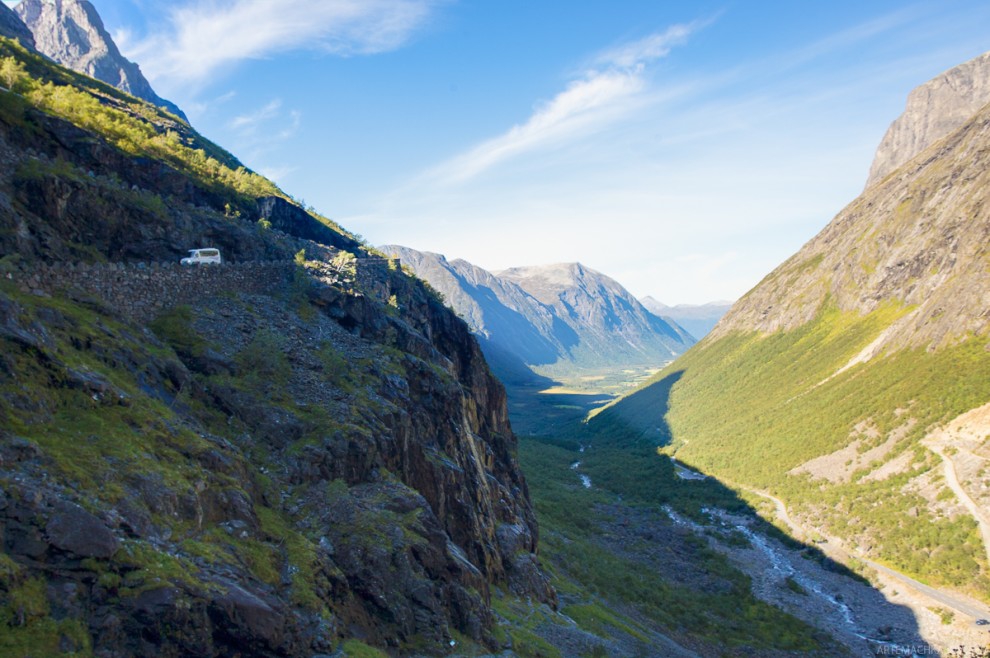 “Incredibly dangerous serpentine!” – That’s what journalists, bloggers and other ethnographers from around the world have written about this road. And I can assure you, it really is. But the reason lies not in the insidious “mother-in-law’s tongues” of this amazing road. You won’t be able to get driving pleasure here – because during high season the traffic on the Trollstigen is quite dense, up to 2,500 cars a day. The endless vans crawl up and down the hill, sharing the road with tour buses and camper vans. Everyone drives peacefully. To drive at 80 km/h is out of the question.

But even at minimum speed, the views of the valley and mountains, spiced with serpentine twists and waterfalls, are very distracting to drive. One has to be fully concentrated so that when the next magical panorama is revealed to the eye, one doesn’t crash into the fencing stone fangs of the roadway. 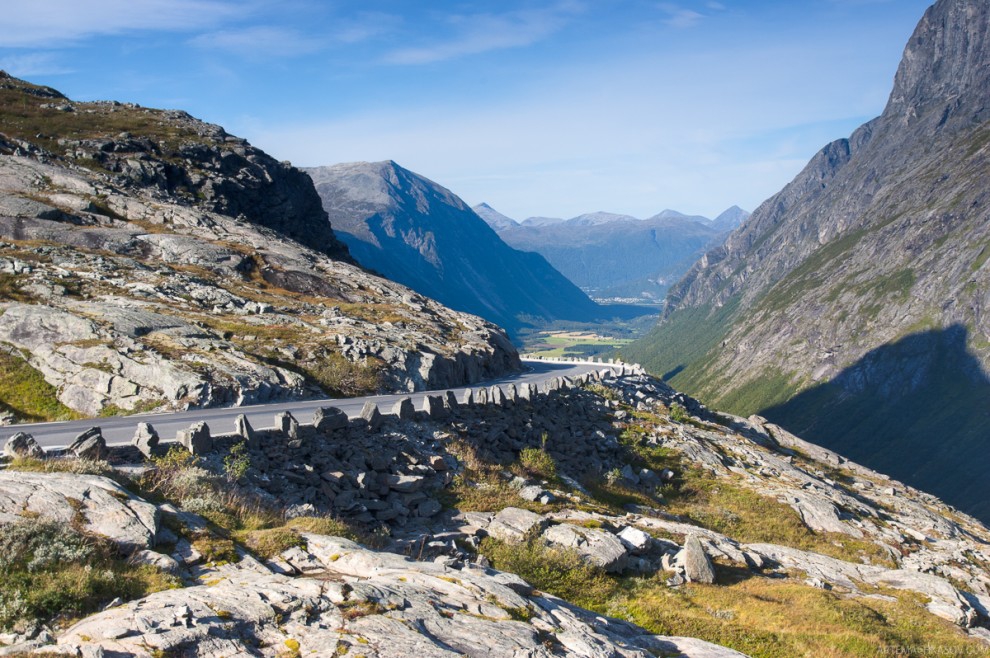 There are a lot of motorcyclists from different countries on the RV63 but most often we meet Norwegians. For them a three-day ride on RV63 in “real wild boar” style is a great way to spend a weekend. One of the severe gray-haired Norwegian bikers (a sysadmin by life) over an evening beer told me that the day before, looking at the native beauty, almost caught a concrete block on this road. 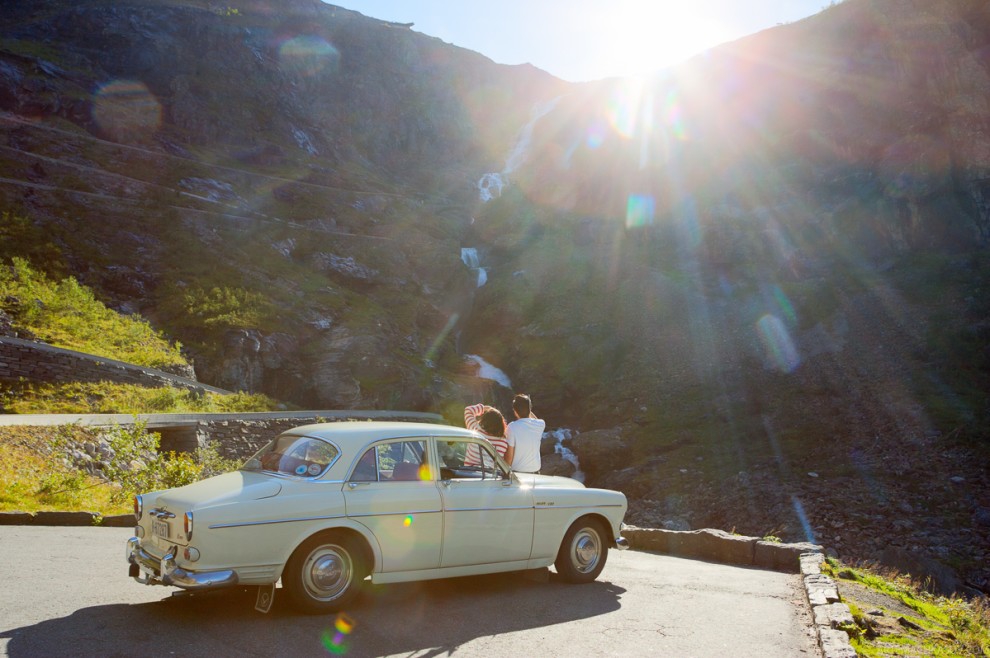 So if you want to admire the views, do just that – park your car at one of the abundant special platforms, take a breath and watch the bright sun disappear behind the pass. 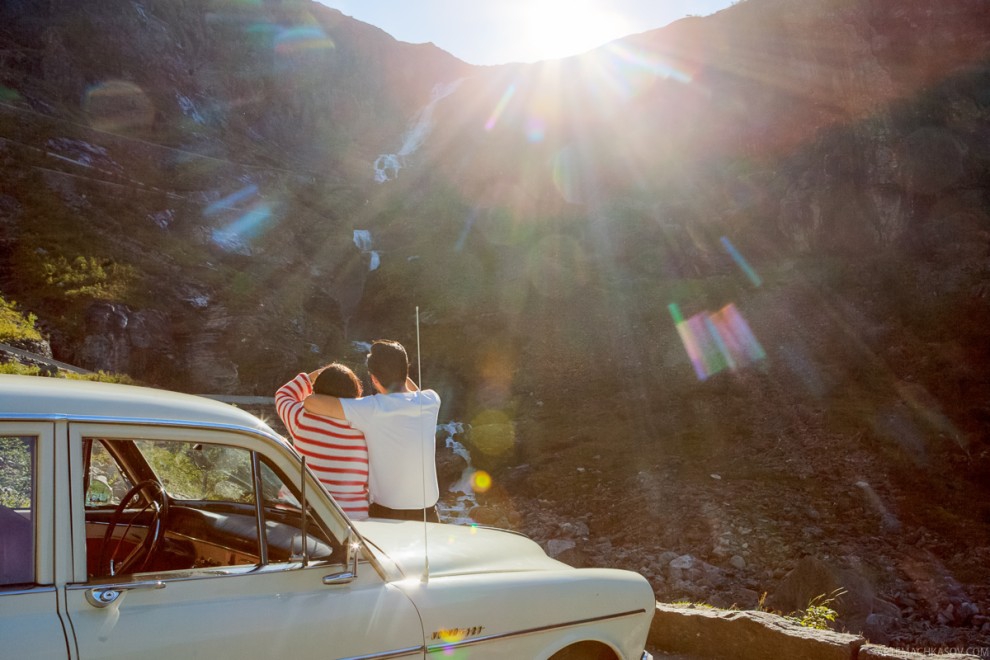 They love classic cars in Norway, so it’s a scene you can witness with your own eyes if you’re in the area. 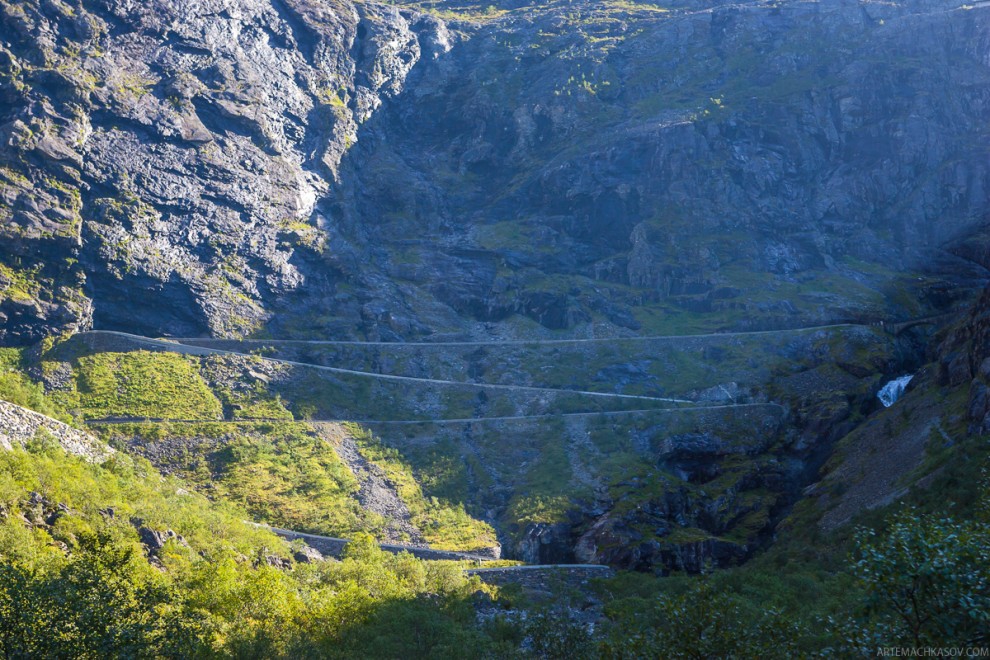 The history of this road between the towns of Ondalsnes and Valldal is reminiscent of the history of Norway itself. In the late 19th and early 20th centuries, in order to ensure the prosperity of fair trade and other communications, it was decided to build a technically difficult road through a steep pass with a vast plateau, lying in the middle between the mentioned settlements. 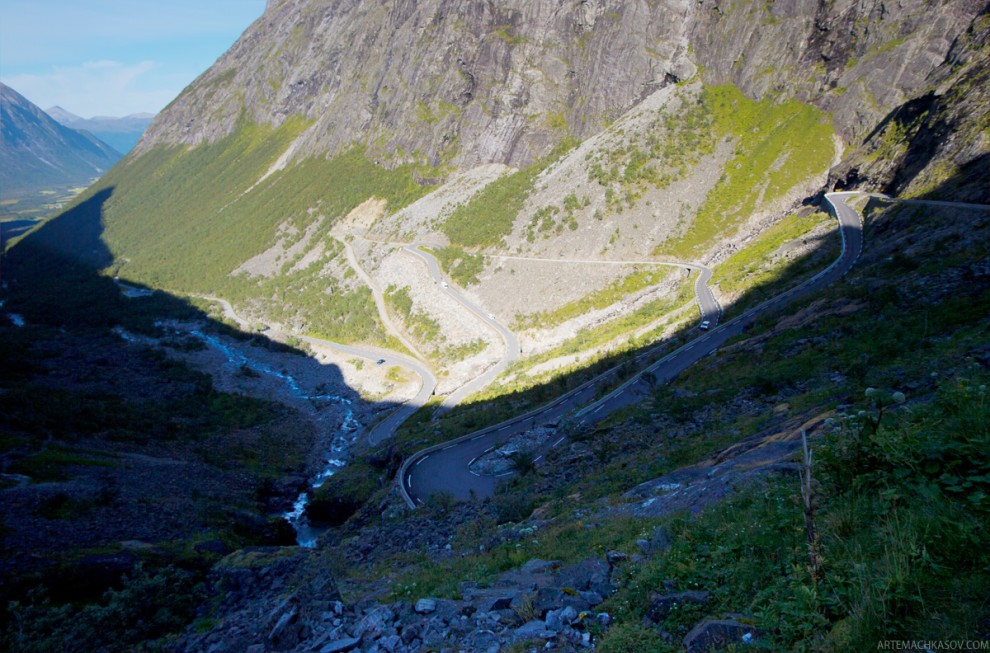 Already then (more than 100 years ago) Norwegian officials were clear about the tourist potential of this road. Therefore the considerable price of a question did not frighten anybody. 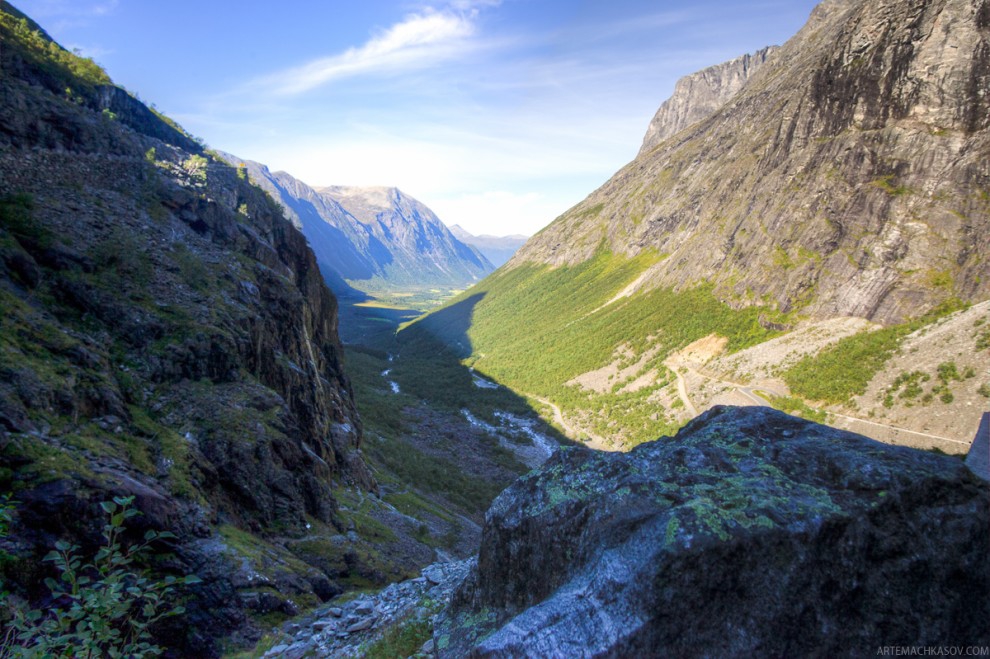 Went years of research, gradually embodied the concept, presentations, allocations, the project, the working documentation. Then the construction, which lasted for almost 8 years, began. 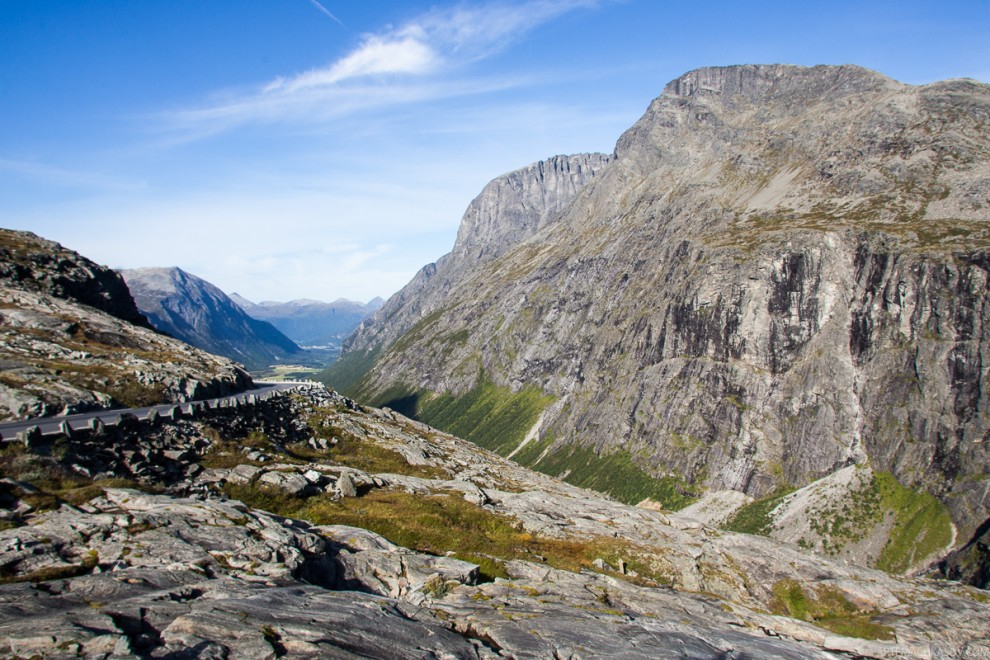 The works were carried out in very difficult conditions – from October to May it snows in these parts, the temperature drops below -20, and the workers were threatened by constant rockfalls. But all this was just another routine test for the descendants of the Vikings. 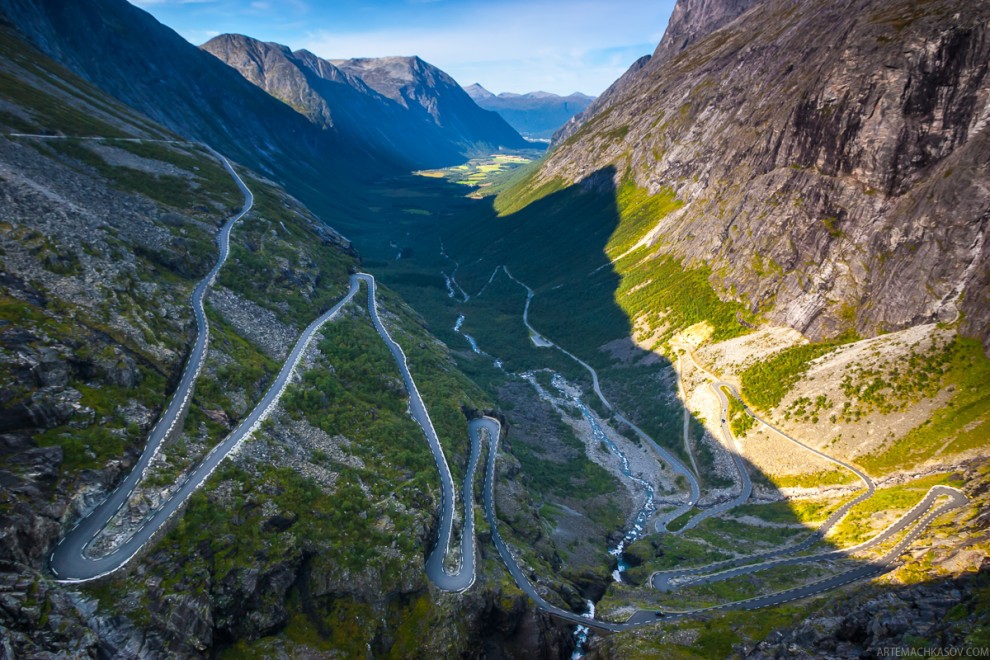 As a result, the road through the Trolley Pass was built in 1936, and has survived to this day without significant changes. And it will live on for hundreds of years to come. 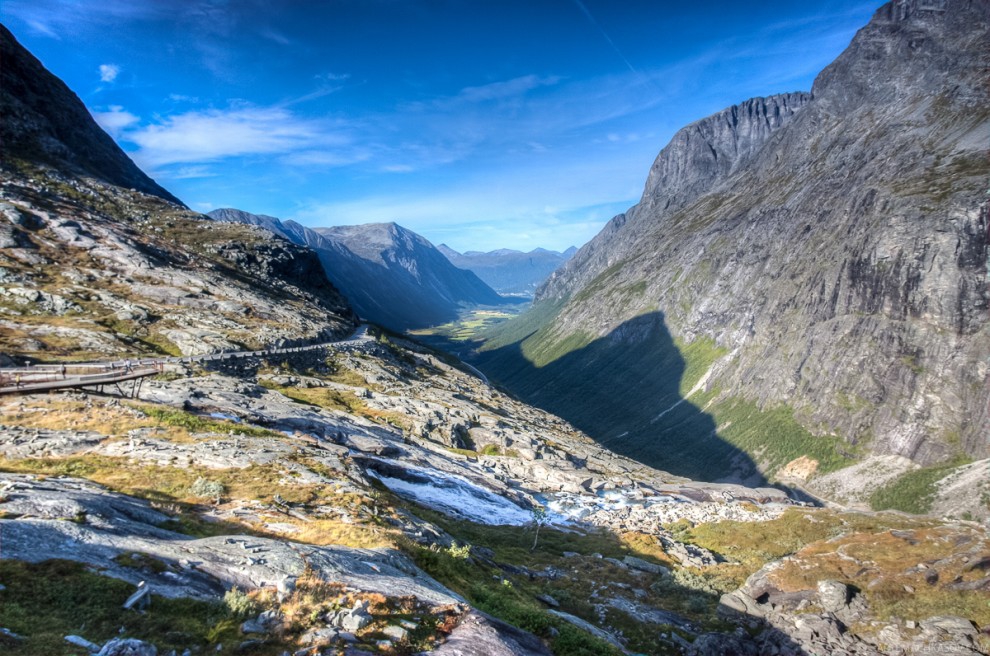 The Act of Acceptance of the site was signed personally by King Haakon VII of Norway. It was he who had the right to name this masterpiece of engineering in the early 20th century. The king ordered the site to be named Trollstigvegen, that is, the “Troll Staircase” road. 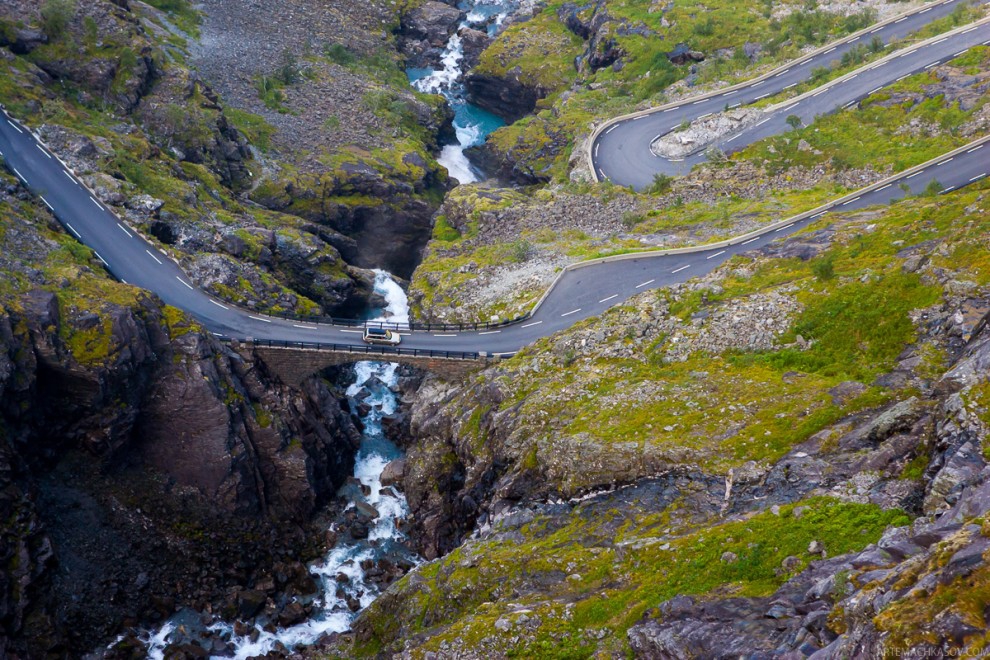 Over the past 10 years, the Trollstieggebahn has been slightly widened, and new elements of engineering protection of the areas have been installed. However, in some places the width of the road is narrowed to 3.3 meters, so according to legal standards, vehicles longer than 12.4 meters are not allowed to pass there. (Technically, a vehicle 13.1 m long may drive on it). The road is accessible only from the end of May till the beginning of October, otherwise it becomes covered with snow and is closed due to the increased danger. In the middle of the road there is a graceful bridge over the Stigfossen waterfall, which drops a stream of water from a height of 180 meters.