Tugela Falls is a competitor of the famous Angel Falls. SOUTH AFRICA

On the driest continent of our planet (as you know, we mean Africa) is the second highest waterfall in the world. It’s the Tugela Falls. 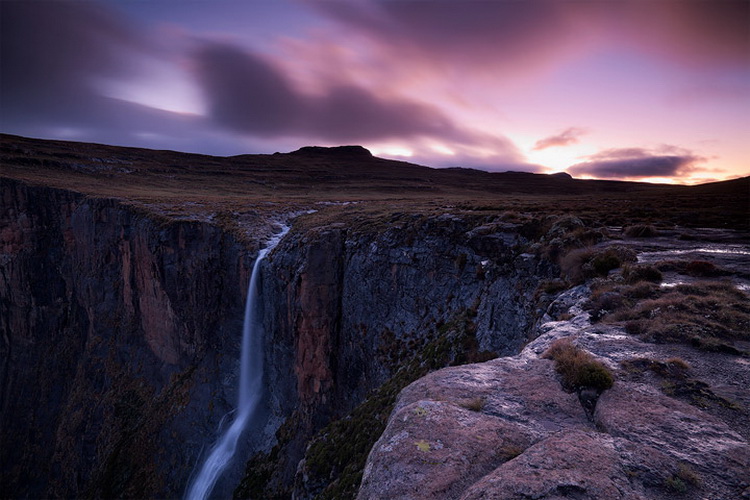 Tugela Falls on a map

You will of course remember that South Africa has 3 official capitals. The reason for this phenomenon is described in the middle of the article about the Cape of Good Hope. Don’t be lazy and read it, it’s interesting.

Tugela or Angel. Which is higher?

Tugela Falls is the closest competitor to Angel, the highest waterfall in the world. And it is literally breathing down his neck and comes on his heels. The height of Tugela Falls is estimated at 948 meters. 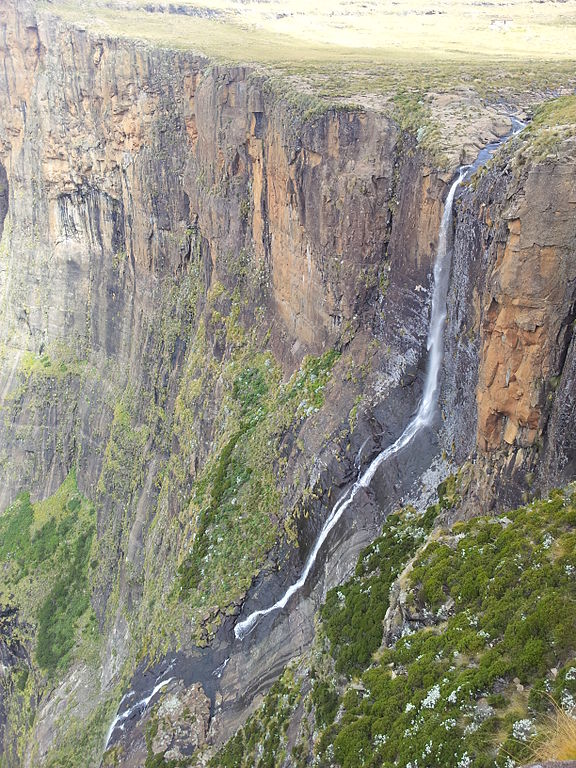 But Tugela is a cascading waterfall, which means the water rushing down from a high cliff passes through five ledges. The maximum free fall height is about 411 meters. In this, of course, it is inferior to Angel, which has this indicator is equal to 807 meters. And the total height of Angel is 979 meters.

There are a number of scientists who claim that it is the highest waterfall of Tugela in the world. As proof, they cite their data, according to which the height of Angel is measured incorrectly, and that in fact it is about 800 meters. We will not enter into a dispute between scientists and find out who is right and who is wrong. Most likely a lot depends on how the measurements are taken. For us the most important thing is that both waterfalls are worthy of inclusion in the attractions of the world.

Tugela is fed by the water of the river of the same name, which originates in the Dragon Mountains. I must say that the width of the waterfall at its beginning is quite small and does not exceed 15 meters even during the season of heavy rains. Naturally, at this time it is most visible from afar. During droughts, the stream of the waterfall significantly decreases in size. 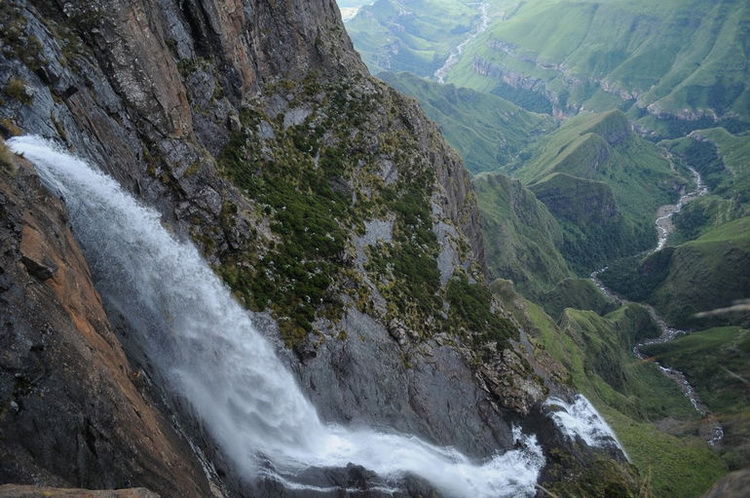 There are two ways to get to the falls. One trail leads from the Witsieshoek parking lot. This short path to the summit ends in two rather spooky-looking suspended ladders. 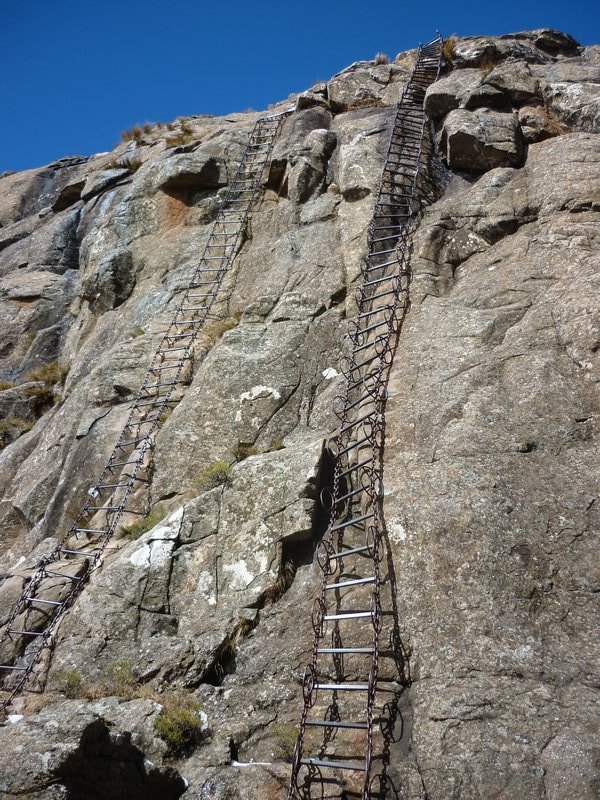 These are the ladders you have to use to get to the top of Tugela Falls.

The second path is about 8 kilometers long and starts directly in the national park and goes through a forest, boulders and a small suspension bridge.

Either way, whether you go on your own or use a guide, you’re guaranteed stunning views. You can find out more about how to get to the falls at almost all of the local hotels. 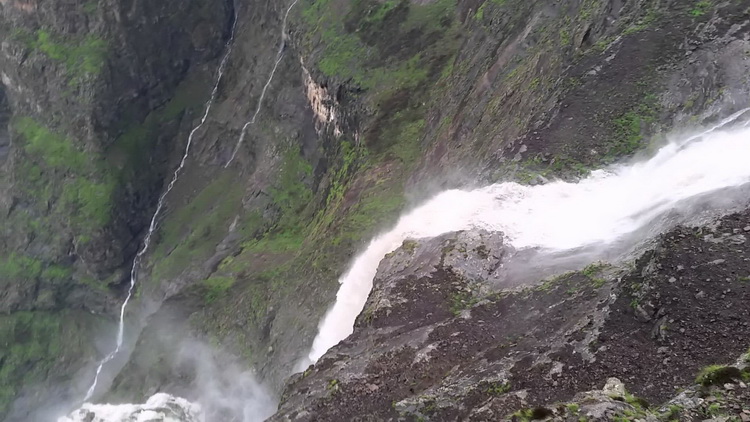 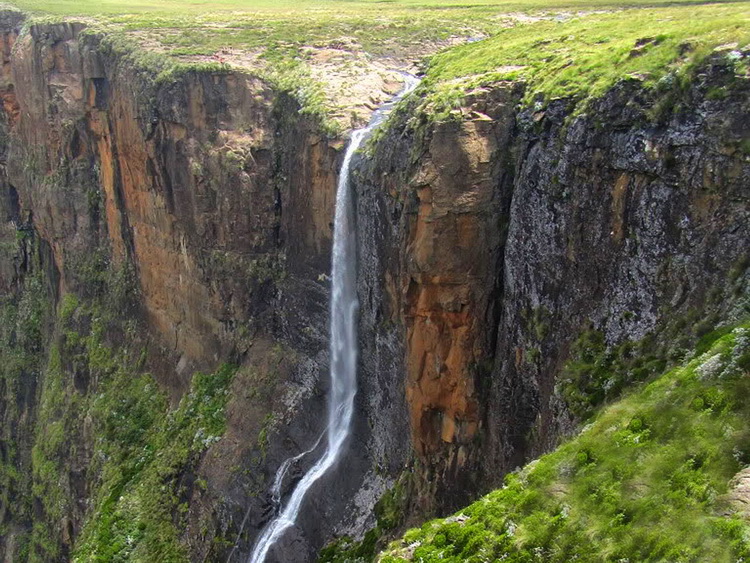 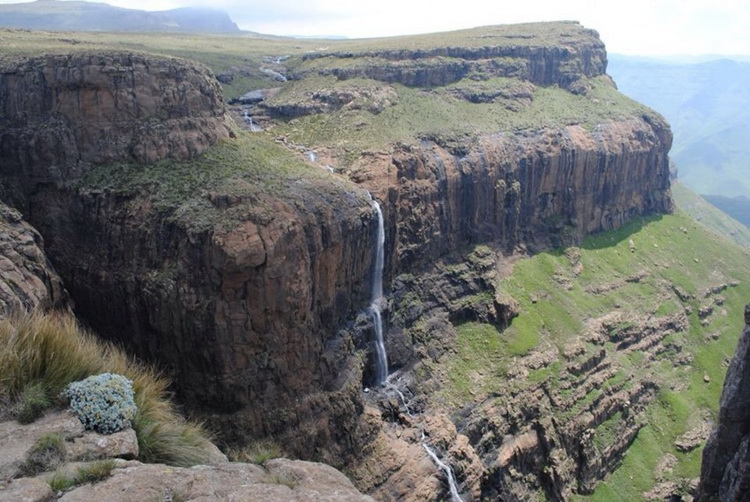 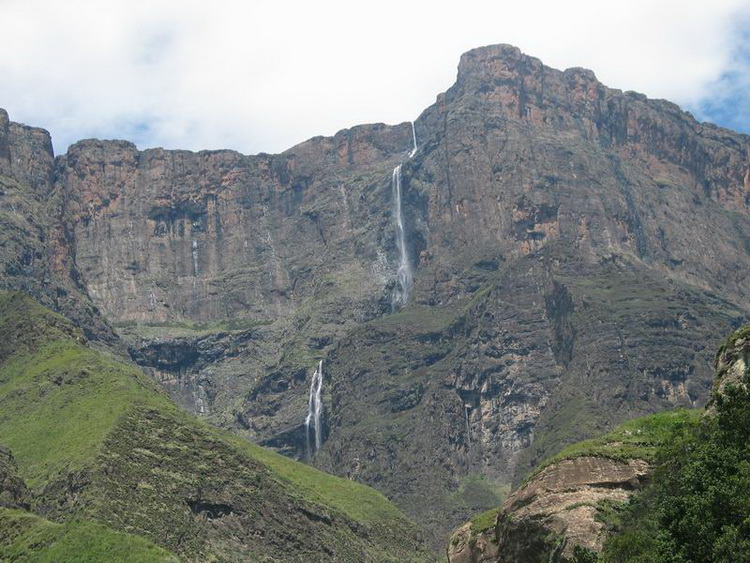 Tugela Falls. View from below

The highest waterfall in the world. And it is not the Niagara Falls.

You thought Niagara Falls were the highest in the world? Well it isn’t! It is the most popular and the most often talked about and written about. Not much is known about the highest waterfalls to the general public.

Niagara Falls attracts many visitors from around the world each year, with various sources citing between 22 and 30 million annually. However, it is far from being called the highest.

First of all, note that Niagara Falls is not a single, monolithic structure, it includes three main streams:

The free-fall height of the American Falls is slightly less – about 21 meters, because the bottom of the gorge is piled with rocks from massive landslides in the mid-20th century.

Nevertheless, Niagara Falls is considered the record holder for the amount of water carried.

Located on the Hawaiian island of Molokai, surrounded on both sides by volcanic mountains. It is quite thin and is characterized by numerous transitions down from one level to the next. The water does not fall down, but slides down a nearly vertical cliff, falling directly into the ocean. The waterfall runs deep into the rocks, which is why it has been impossible to find for a long time.

It would seem that why it is not visited by tourists en masse? After all, many tour companies in Hawaii offer tours to Olowpena Falls. However, helicopter flights to it require good weather conditions. Most photographs of the site are taken from the air, not from the ground.

Located in Otichi National Park, in the remote Ayacucho region, most of which is on a high, highly rugged plateau in the central Andes. The waterfall consists of three cascades of powerful water flows. It is very narrow – only 14 meters. It is surrounded by lush green tropical jungle, some of the trees there grow up to 30 meters. The surrounding area is so beautiful that it reminds one of paradise.

The Three Sisters Falls were discovered relatively recently and, in fact, by accident. A group of photographers went to shoot another waterfall – Katarata, which has a fall height of 267 meters. However, as they made their way through the jungle, they stumbled upon a much more spectacular natural wonder.

These are five free-falling cascades, the largest of which is 411 meters. The total height is 933 meters.

It falls in a narrow ribbon from the eastern rim of the Dragon Mountains, in the Royal National Park of Natal, KwaZulu-Natal province. It is clearly visible after a heavy rain or at the end of the day, glistening from the reflection of the sun. The source of the River Tugela is located in Mont-Aux-Sources, a few kilometers from the precipice from which the waterfall falls. The water above the waterfall is clear and safe for drinking. The precipice is often covered with snow during the winter months.

There are two trails leading to the waterfall, although they are quite difficult for the untrained person.

And what is the highest waterfall in the world?

The Spanish names are Kerepakupai Meru, Salto Ángel, and in the Pemon language (the language of the South American Indian people Pemon), Kerepakupai vena, which means “Waterfall of the deepest place.”

Its height is 979 m. The height of the continuous free fall of water is 807 m. Discovered in 1935, it was named after Venezuelan pilot J. Angel, who contributed to its study.

The drop height is so great that before it reaches the ground, the water is atomized into tiny particles and turns into a fog that can be felt several kilometers away. The falling water falls into the Kerep River in the Venezuelan state of Bolivar.

The result is such mesmerizing and unusual photos

However, all this is quite controversial. First, many people now believe that Angel Falls is not as high as American journalist Ruth Robertson originally depicted it in 1949. Second, a Czech scientific expedition took new measurements in 2016, making the waterfall 983 meters high, which is already a solid claim to first place. Third, the original measurements in the 20th century were taken at a considerable distance from the two waterfalls.

What else is the controversy about? Tugela is a cascading waterfall, that is, the water rushing down from a high cliff passes through five ledges. The maximum free-fall height is about 411 meters. In this, of course, it is inferior to Angel, whose figure is 807 meters.

Why do fewer people know about Angel Falls than about Niagara Falls?

The fact is that the waterfall is located in the wilderness of Venezuela – in the tropical jungle, so you can only get there by air or by river. To get to Camp Canaima, the starting point for river trips to the base of the falls, you must take a flight from Maiquetia Airport, Puerto Ordaz or Ciudad Bolívar. River trips are usually from June through December, when the rivers are deep enough. During the dry season (December to March) there is less water than in other months.

The Angel was discovered much later than Niagara Falls, with tourism developing around Niagara as early as the first half of the 19th century. In addition, throughout the twentieth century, people tried to keep the falls attractive to tourists. Not for nothing it was once called “a man-made wonder of nature, an amusement park for nature lovers.

Niagara, in principle, played a major role in the development of the electric power industry. Within just two decades at the turn of the 19th and 20th centuries, several hydroelectric plants were built on it, producing clean and relatively cheap power.

But what about Angel? Only in 1949, an expedition of the U.S. National Geographic Society to the falls, which resulted in the determination of the height and the publication of the book. Such are the vicissitudes of fate.

Subscribe to the “Flight of the Globe” channel and click on the heart (❤️). Then you will learn more interesting facts about our planet.