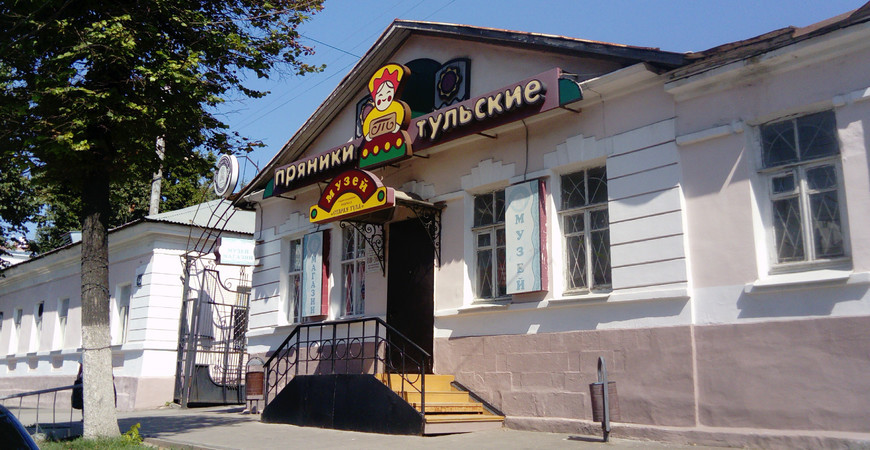 The two halls of the museum present a huge assortment of gingerbread: name, congratulations with inscriptions, honorary, made-to-order, timed to special dates and holidays, shaped and baked in ancient forms, including the only one of its kind, weighing 50 kilograms of gingerbread. Gingerbread in the Tula Museum is not just a delicacy, but also a unique museum exhibit, reflecting the events of bygone years. By the pictures and texts on the gingerbread you can even learn the history from the times of the Russian Empire to the present day.

Among the museum’s exhibits are gingerbread men made according to the forms of the gingerbread man Konstantin Ivanovich Shchukin. Made by him, you could buy not only in Tula – it is known that much of the products were exported to France and Paris. Thanks to the granddaughter of the famous gingerbread man, the exhibition was enriched with documents, photographs, gingerbread spindles, personal belongings and other artifacts of the XVII-XX centuries.

The largest exhibit in the museum – an honorary gingerbread cake weighing 50 pounds, baked especially for the anniversary of the city of Tula.

The final, and perhaps the most enjoyable stage of the tour is the tea party. Together with tea the table is served with fragrant and freshly baked gingerbread made in the own shop of the museum.

READ
Museum of Bread in St. Petersburg, description and how to get there

There is a store with gingerbread souvenirs at the museum. It has not only the classic gingerbread with jam and condensed milk, but also other fillings – candied fruits, apricots, plums, strawberries. All gingerbreads vary in shape, design and size – there are even huge gingerbread that weighs 5 kilos.

Tours of the Tula Gingerbread Museum

Despite the fact that the museum “Tulsky gingerbread” opened quite recently, he quickly gained fame, and today you can get there only if you sign up in advance.

Signing up for a group visit is carried out for 14-21 days. The maximum number of people in a group is 46. For the tour is allocated 1 hour. Late can threaten the cancellation of the program.

For an individual visit, you must sign up in advance at the free time of the groups, preferably 1-2 days in advance. You can try your luck and join an already assembled group. Sometimes it happens that some people do not come at the appointed time and the group has vacant seats.

With the beginning of the excursion season, as a rule, a schedule of visits is scheduled for a month in advance.

The first mention of Tula gingerbread dates back to 1685, but the true popularity of gingerbread began to gain in the second half of the XIX century. Soon the fame of Tula gingerbread spread beyond Tula, making it one of the symbols of the city, along with weapons, samovars and accordion.

Despite the national fame and historical significance of one of the oldest Tula crafts, the decision to create a museum was made only in the early 1990s. In 1994, an initiative group was formed with the purpose of preserving the glory of Tula gingerbread and the organization of a private museum “Tula gingerbread”. The group petitioned the city authorities with a request to allocate an area for the collection of exhibits, documents, etc.

The doors of the museum were thrown open for the first time in 1996, on the day of celebration of the 850th anniversary of Tula.

For more than two decades, the museum collection was abundantly replenished with historical materials, and of course, a huge number of gingerbread men themselves, which have been baked in a confectionery factory “Old Tula” for more than 100 years.

The rarest exhibits were purchased by collectors and descendants of famous gingerbread men. Over the years of work in the state archives, museum staff also learned the long lost names of gingerbread men, who had been forgotten back in the early XX century.

Museum exhibits are displayed in a historic building that once served as a gunsmith and samovar brothers Lyalin. Initially, the museum included an exhibition hall, a tea room, a gingerbread shop and a souvenir store. Over the years, the number of visitors was growing, and the old buildings could not accommodate all wishing to (and it’s almost 25 thousand visitors a year). Because of that, the management decided to open the second hall, and in 2003 the grand opening was held. As a result the attendance has increased to 33 thousand people a year.

Nowadays the Tula Gingerbread Museum is well-known not only in Tula, but also beyond its borders. Here visitors often come from Moscow, Kaluga, Serpukhov, Chekhov and other Russian cities.

Entrance to the museum and the “Tula Gingerbread” store, panorama from Google Maps:

How to get to the museum “Tulsky gingerbread”

The museum is located in the Zarechensky district of Tula within half an hour walk from the Tula Kremlin.

Within a radius of 200 meters there are several stops of public transport. The closest of them is the stop “Maxim Gorky”, buses, trolleybuses and marshrutkas pass through it. From “Moskovsky” railway station you can get by buses number 36, 36A, trolleybus number 6, route taxis 66 and 158K. The trip takes about 20 minutes.

The most comfortable and fastest way is to take a cab, which you can call with one of the applications – Yandex.Taxi, Gett, Maxim. 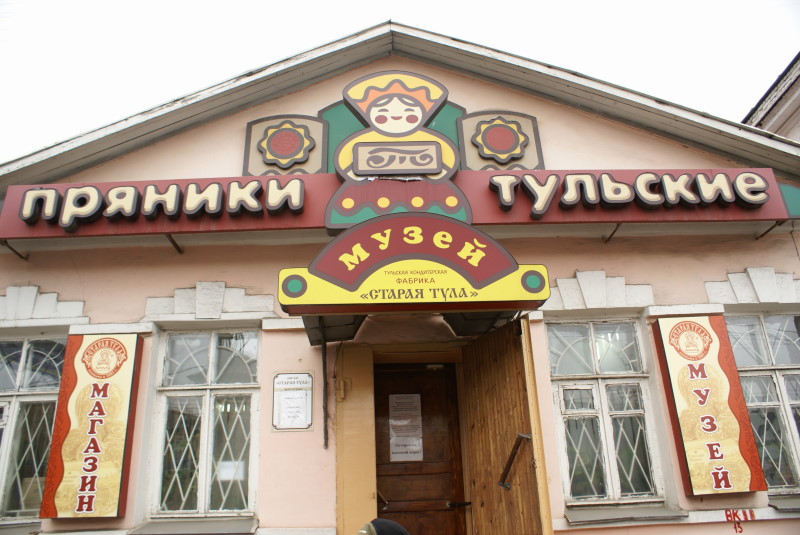 One of the youngest museums of Tula, the museum “Tula Gingerbread” was founded in 1996. But despite its unimpressive age, it has long been known not only among the citizens, but also among visitors from other cities and even countries. The unique museum, devoted to the popular delicacy, is located in the ancient buildings, once belonged to the Lyalin brothers, who were famous for their armory and samovar trade.

Visitors of the museum are introduced to the history of gingerbread that appeared in Russia many centuries ago, and this history, like any other, numbering so many years, has its ups and downs, its periods of oblivion and revival. The museum “Tula gingerbread” introduces its guests to the ancient traditions and rituals. Here you can see how gingerbread is made in modern production, and immediately compare them with the gingerbread made on ancient forms. The museum exposition contains a variety of samples, from the smallest that weighs a little over 50 grams to the largest, sixteen kilograms, the only one in Russia. 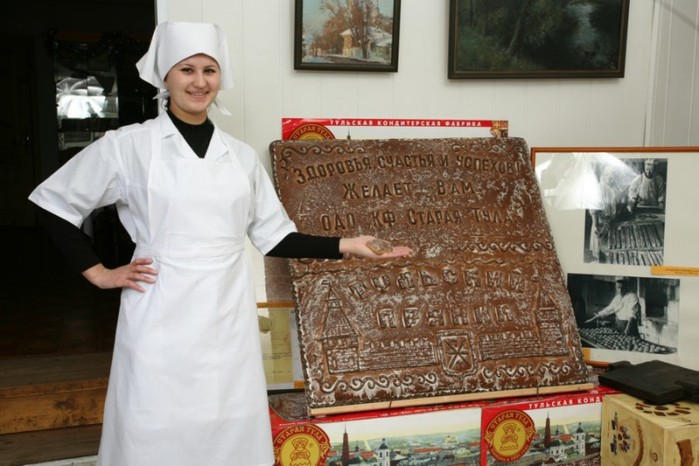 During the excursion you can even trace the history of not only this tasty delicacy, but also of the whole country. After all, events that happened in different periods in Russia, found their reflection in different kinds of gingerbread. 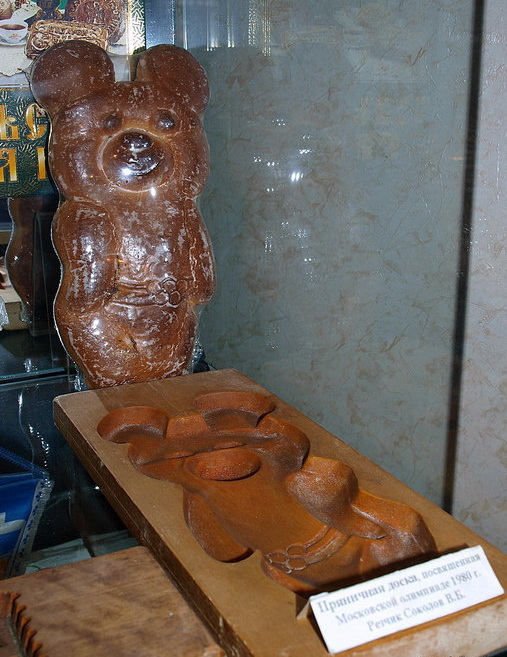 Gingerbread dedicated to the Olympics

What kinds aren’t presented in the museum! There are, as it turns out, gingerbread of congratulations, festive, made-to-order, historical, personal, figurative and honorary types. 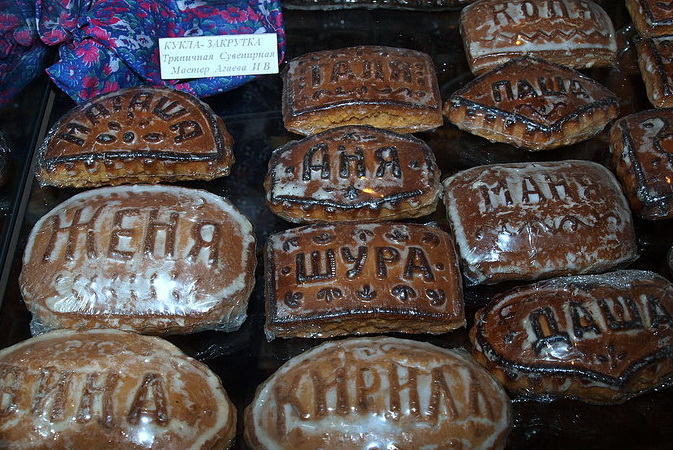 You can say that the printed Tula gingerbread combines two hypostases: on the one hand this amazing delicacy – a dainty, and on the other – a souvenir, postcard, greeting and even a poster, which is decorated in the best of folk traditions.

Sweet and fragrant gingerbread was a regular fixture on the table in ancient Russia on all occasions, both merry and sad, gingerbread treated both tsars and peasants. Their presence at certain holiday feasts were simply obligatory, the closest people were also gifted with gingerbread. 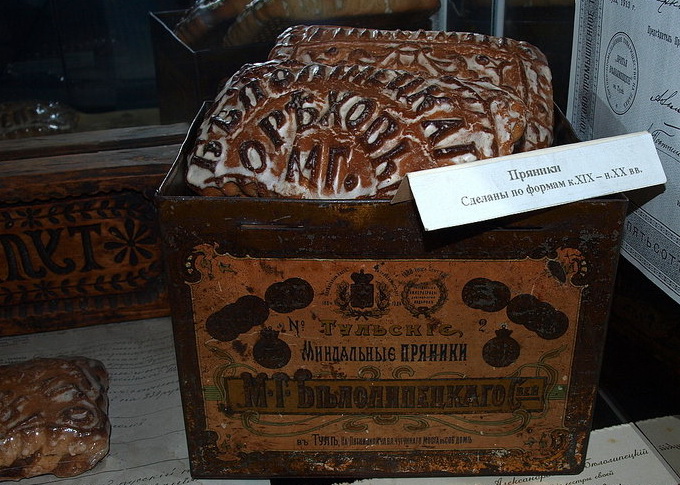 Gingerbread in the 19th and 20th centuries

Christmas, Easter, many other Orthodox holidays, as well as memorial days could not do without baked gingerbread. Lenten gingerbread served as a “consolation” for sweet lovers during Lent and Christmas.

Gingerbread was given to a child when he was given a name, probably, hence the later custom of indispensable gift of gingerbread on his name day.

At weddings the newlyweds received a huge gingerbread as a gift, and when the gingerbread was handed out in pieces to the guests, it was a kind of signal to the end of the feast: it’s time to go home! On the second day of the wedding, the young couple visited the parents’ home with another gingerbread to exchange it for money and gifts. Some gingerbread was even ascribed healing properties, for this purpose, instead of traditional patterns on the surface of the gingerbread they depicted the names of saints or some ritual signs.

For children, gingerbread was also the most favorite treat and a welcome diversion. Peasant children were happy to accept the flavored sweets, made in the form of toys, and some gingerbread were depicted letters – a kind of alphabet.

The popularity of Tula gingerbread can be judged by fairy tales and ancient legends, in which you can find references to how the heroes dined on gingerbread and ate foreign wines with them.

The first written mention of gingerbread was in the scribe book, dated 1658. Tula is famous for many products that are unique and have made Russia famous around the world: weapons, samovars, harmonica. These products have long been represented by the famous Tula museums, and only the Tula printed gingerbread, popular throughout Russia, until recently did not have its own museum, and its history was little covered.

The idea of an initiative group of Tula residents to open a gingerbread cake museum was supported by the General Director of the confectionery factory “Staraya Tula”, moreover, in 1996 the city of Tula solemnly celebrated its 850th anniversary. The opening of the world’s only Tula Gingerbread Museum was a great gift to the citizens and numerous tourists. 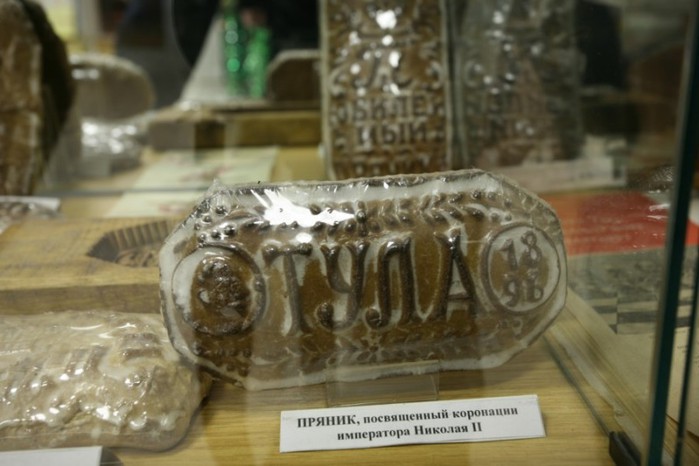 Gingerbread dedicated to the coronation of the emperor 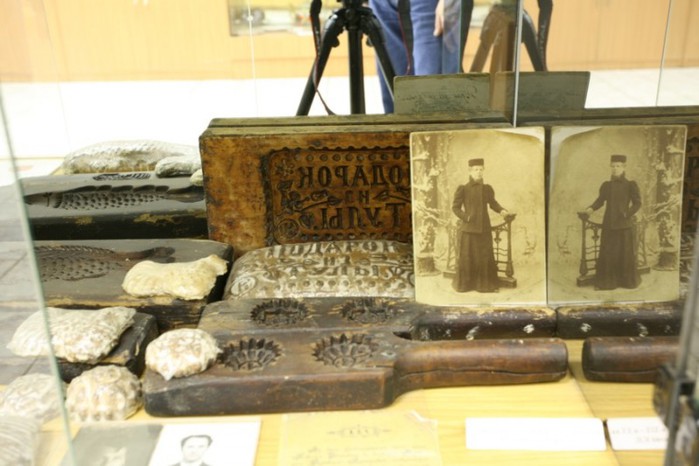 Exhibits from 120 years ago

A lot of popularity is given to the museum by the fact that visitors can try gingerbread cake with the scent of honey and butter with fragrant tea in the tea room, and at the end of the tour you can buy the freshest Tula gingerbread at the souvenir store. In a very short time the Tula Gingerbread Museum has become so popular that during the tourist season you have to make an appointment for a tour almost a month in advance. 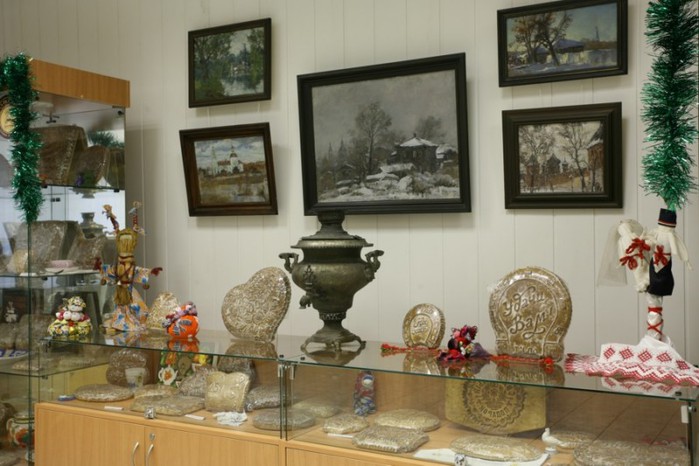 The Tula Gingerbread Museum took its rightful place in the Association of Russian Museums, the staff prepared an extensive (over 400 exhibits) traveling exhibition. For several years, residents of Ulyanovsk, Samara, Syzran, Penza, Murom, Novokuybyshevsk and Dmitrograd were able to see this temporary exhibition. The exhibition was also on display in the Vladimir and Suzdal Museum Reserve.