Museum of the Sea at Fort Royal on St. Margaret’s Island

The grim Fort Royal, with its small rectangular windows, has been a prison since the late 17th century. Now part of the building has been converted into a youth hostel, and a dive center operates there. The rest is the Sea Museum. 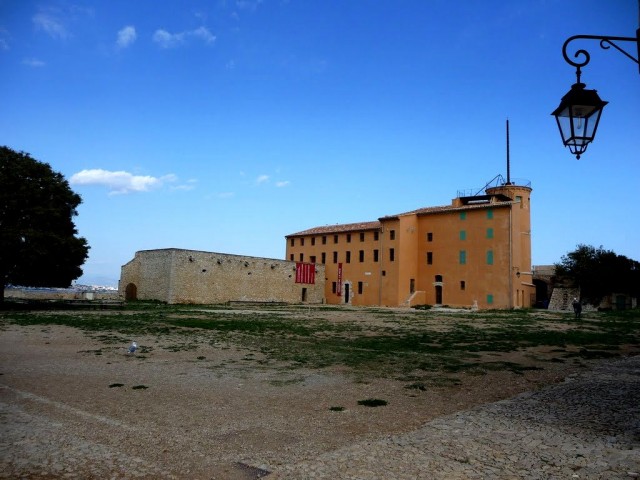 It took us about fifteen minutes to get to Île Sainte-Marguerite from the Old Port by boat. The island, covered with a dark eucalyptus forest, was surprisingly beautiful. Fishermen’s huts were hidden in the dense greenery. Above the forest rose the somber walls of Fort Royal.

The fortress was founded by the Duke de Chevreuse in the XVII century. The fort entered world history and was described in novels as the place of imprisonment of the legendary Iron Mask. 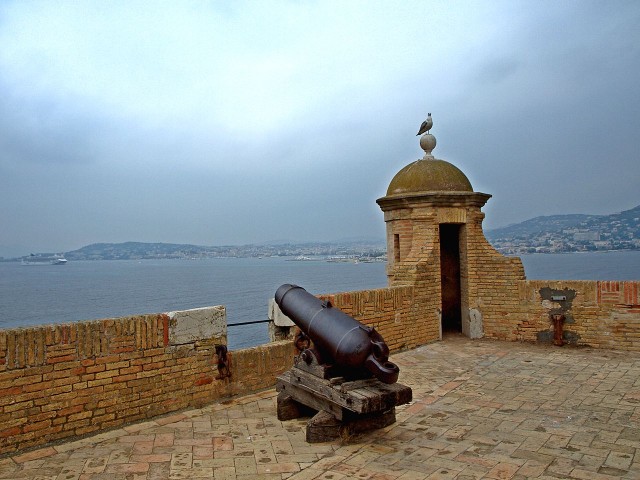 The grim fort with its small rectangular windows looks like a prison. It has been a prison since the late seventeenth century. Now part of the building has been converted into a youth hostel and there is also a diving center. The rest of the former fort houses the Maritime Museum (Musée de la Mer).

The museum turned out to be small, but the exposition there is interesting. In the two-story wing on the side of the main building, added in 1690, was the state prison. There were six cells, among them the Iron Mask cell. 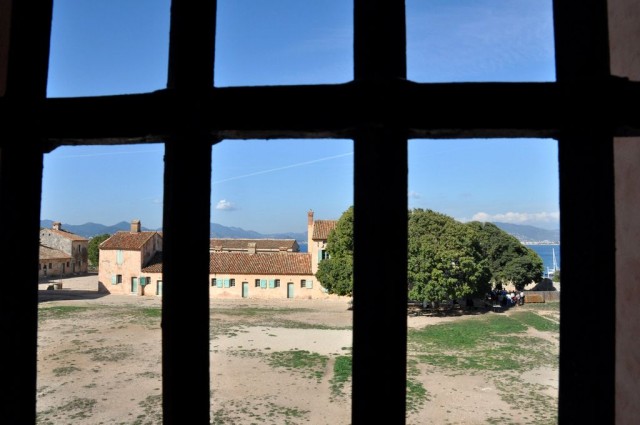 View from the Iron Mask cell, photo by Serge Robert 984

By the standards of the XVII century this prison was quite comfortable. Today, however, its heavy barred door, narrow barred window and ancient low vaults are depressing. It is especially sad when one imagines that an innocent prisoner of royal blood had been looking at these surroundings for more than a decade. There is almost nothing left of the interior of the cell. According to the guide, in earlier times there were draperies and tapestries, some furniture, and a carpet on the floor.

At the base of the four-story main building lie four cisterns. The fact is that in the Gallo-Roman period there was no fresh water on the island. The huge cisterns served to collect rainfall streams. During the construction of the fort these structures were used as foundations. Today they house an exhibition of the Museum of the Sea. 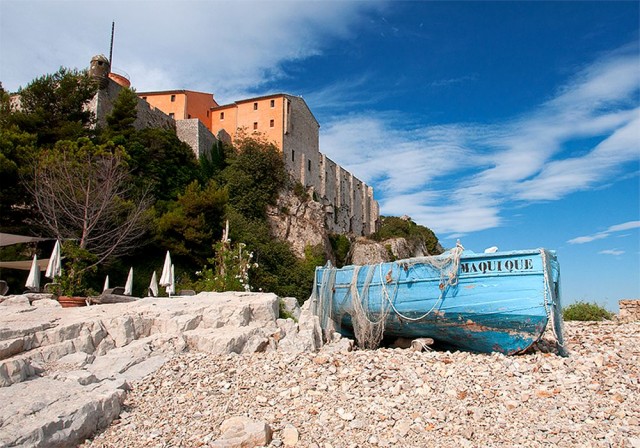 For me, the most impressive thing was the exhibition of model ships, from the ancient to the most modern. We saw objects from sunken ancient ships: amphorae, vases, terracotta dishes, a lot of ceramic products, the purpose of which could not be determined, other archaeological artifacts.

On the first floor of the Museum of the Sea are restored fragments of ancient Roman paintings discovered during the excavations of 1972. 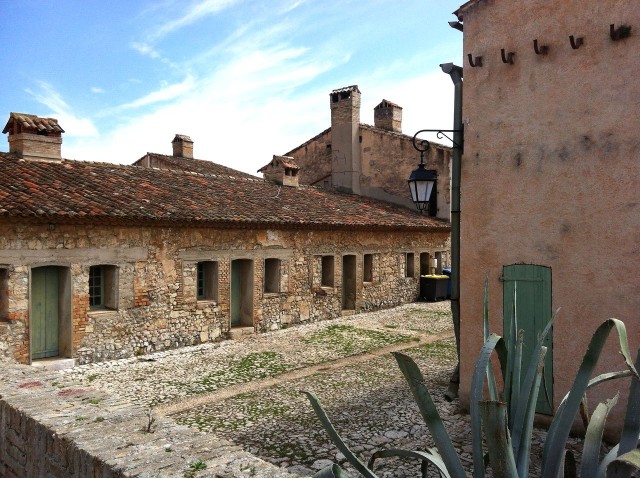 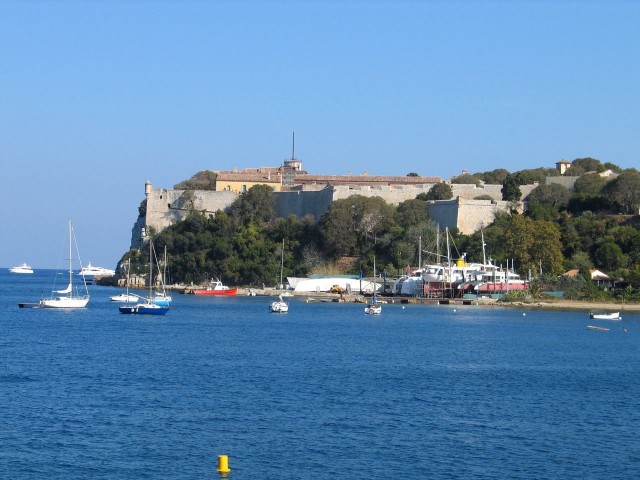 The largest selection of discounted hotels on Booking. It offers hotels and apartments worldwide. 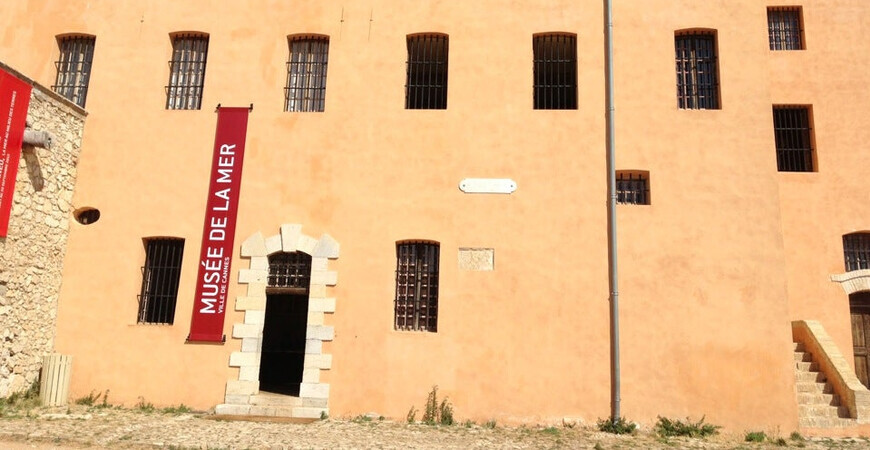 Maritime Museum is a museum of archeology, art and history in Cannes. It is located not in the mainland part of the city, but on the island of St. Margaret, the nearest of the Lérins Islands. It is housed in the oldest part of the Royal Fort of Vauban, famous for being the place of detention of Alexandre Dumas’ character, the Man in the Iron Mask. The museum exhibits relics found underwater, dating back to Roman civilization and the Saracens.

READ
Petralona Cave in Greece. A site of ancient people

The Maritime Museum is located in the most imposing building of the fort, called the “Old Castle”, built in the seventeenth century on the ruins of the Roman period and the Middle Ages. Classified as a historical monument, it is surrounded by pine and eucalyptus trees, overlooking the sea. Tourists can visit the old state prison and the famous “Iron Mask” cell where the mysterious prisoner served his sentence for eleven years, the Huguenot Memorial, see the frescoes of Jean Le Gac, dedicated to the theme of the famous prisoner.

The museum was officially opened in 1977, and the archaeological excavations have been presented to visitors since 1978. The museum exhibit features underwater archaeological materials that were found inside sunken Roman and Saracen ships. These are Roman amphorae, pottery and fragments of Roman frescoes. Visitors will also see historical objects found as a result of land excavations. Part of the exhibition is a few dozen models of seagoing ships, from the most ancient to modern. There is also a section dedicated to contemporary photography and art exhibits.

At the end of the seventeenth century, the fort acquired a new function as a state prison, where persons who might be a danger to the monarchy were imprisoned at the request of the king. In 1690 a wing was added to the building, bringing the number of prison cells on the first floor to six.

“Iron Mask” remains the most famous prisoner in the history of the fort. According to Victor Hugo, this prisoner, whose name no one knows and whose face no one has seen, is a real mystery that has fascinated generations of historians and novelists. Nearly sixty different names have been given to him, the most romantic of the versions stating that he is the “twin brother of Louis XIV. This hypothesis, considered far-fetched today, nevertheless remains a favorite subject of popular Hollywood movies.

The “Iron Mask” cell has not survived to this day. The individual was unknown to anyone, only his personal jailer could communicate with him. His only opportunity to go out was to attend daily Mass held in front of the altar in the corridor, near his cell door. Guides tell us that his cell had functional furniture, wall carpets, and tapestries. Nothing remains of the famous “Iron Mask” except the mystery of his identity.

Protestants were imprisoned at Fort Santa Margarita Island for “crimes against religion,” events that took place in the seventeenth and eighteenth centuries. In memory of the martyrdom of the pastors imprisoned in the fort, a memorial has been erected in their cells. Under the auspices of the Society for the History of French Protestantism and at the initiative of Pastor Charles Monod, the first cell was opened in 1950. The event took place with the active help of Protestants in Holland and in the presence of Pastor Marc Begner, president of the Protestant Federation of France. The following year a second cell was opened. In 1985 this memorial was transferred and integrated into the Maritime Museum.

Mode of operation and prices

The Maritime Museum can be visited throughout the year as an individual or as part of a group tour. Opening hours:

The cost of guided tours:

Guided tours can be booked all year round by prior arrangement.

Sainte Marguerite is located 1,5 km from Cannes. Boats go to the island every 15 to 20 minutes and the trip time is 15 minutes. To find the port in Cannes is not difficult, there are many signs on the waterfront. From the pier (debarcadere – Quai Laubeuf) of the island of Saint-Marguerite, turn left and walk about 850 meters.

Find a cab in Cannes at specialized parking lots or near bus stops. You can order a cab from local companies Allo Taxi, Taxi Cannes or use mobile applications such as Uber and Easy Taxi Cannes.