Diving is one of the most exciting activities for tourists. And without fail, the diver tries to drag something off the bottom of the sea as a keepsake. Usually it’s coral. In fact, it’s devastating to the fragile marine ecosystem.

So some people have started thinking about conserving and enhancing the natural treasures and inhabitants of the sea (which include corals). What is needed to do this? It is not realistic to warn every diver. Putting guards on corals is also unrealistic. We can go another way. First, you need to distract the divers from the corals and interest them in something else. And this solution has been implemented in Mexico.

In particular, in the Mexican city of Cancun was built an amazing and even surreal underwater museum, officially called the Muse Museum (in the original Musa, or Underwater Museum of Art). It is located on the border of the Gulf of Mexico and the Caribbean Sea, near the island of Isla Mujeres at a distance of just over a kilometer off its coast at a depth of 4 to 8 meters. 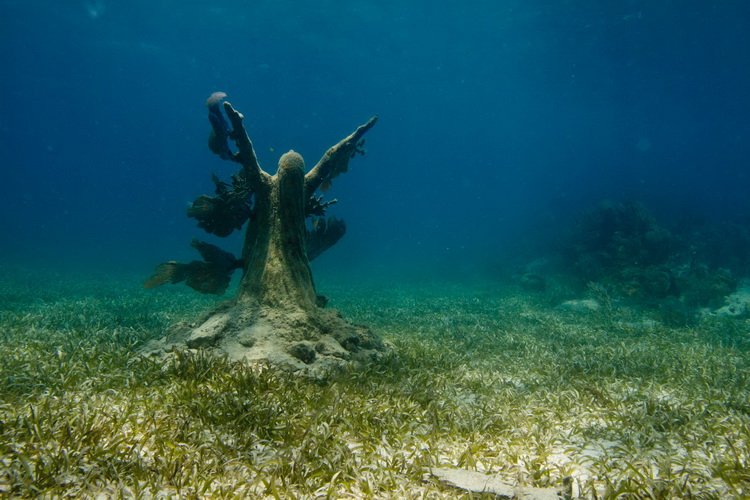 Underwater Museum of Cancun on the map

Underwater Museum of Cancun is a complex of sculptures located right on the seabed. The vast majority are life-size underwater sculptures of people. In addition, there are other exhibits, such as a car, a house, a table and even an underwater mine. 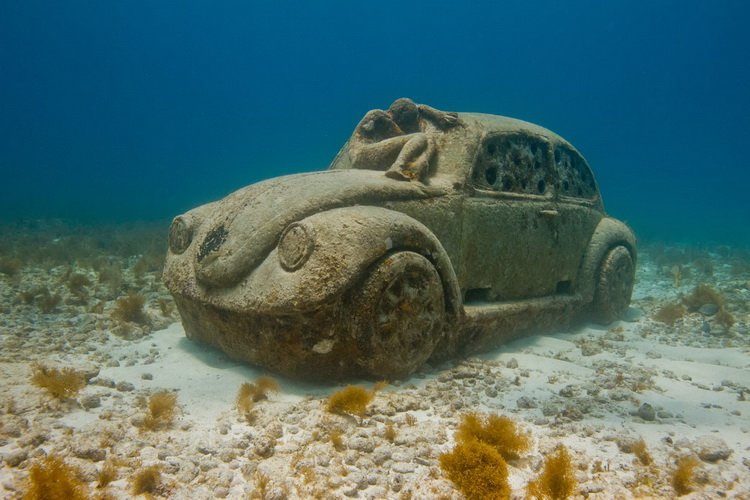 The museum of underwater figures was opened in 2010, so you can consider it a relatively young attraction in the world.

The underwater museum performs several useful functions at once. The moral and ethical aspect is to show mankind the complexity and versatility of the relationship between man and the environment. To draw people’s attention to the protection of the coral reef ecosystem. From the practical point of view, the underwater sculptures serve as a basis for future coral colonies and are a home for sea creatures (for this purpose, by the way, holes are made in many exhibits). In addition, this extraordinary attraction generates income from travelers.

Who created the underwater museum of Cancun

The idea of creating an underwater museum belongs to a group of people not indifferent to nature and art. This project was founded by Dr. Jamie Gonzalez Cano, Roberto Diaz Ebraham, and British artist and sculptor Jason Taylor. Jason became responsible for filling the underwater museum with sculptural compositions. 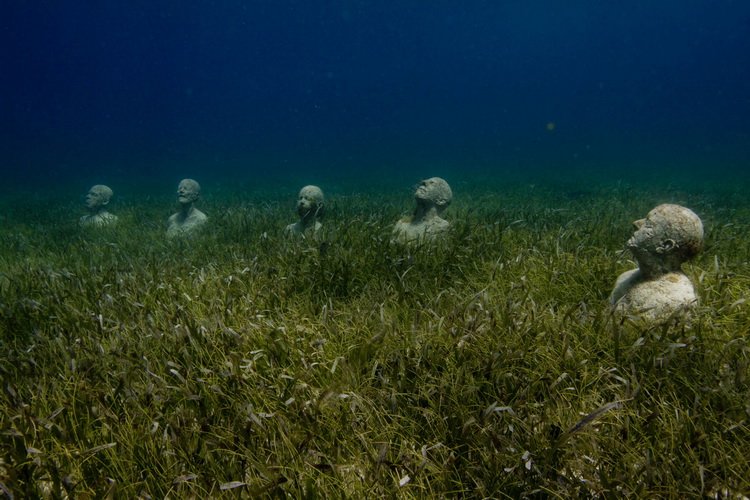 Since ordinary concrete for seawater is not very suitable, it was decided to create sculptures from a special, so-called marine concrete, which includes cement, silicone and fiberglass.

Taylor was very successful in this business, and now there are more than 500 exhibits on an area of 420 m 2. To prevent the sculptures from being swept away by the sea currents, they were installed on heavy bases (weighing up to 2 tons).

Jason Taylor (full name Jason de Caires Taylor) knows us for another outstanding creation: the underwater compositions in the Atlantic Museum, off the island of Lanzarote, part of the Canary Islands.

The main compositions of the underwater museum

All the underwater sculptures and sculpture groups in Cancun have names.

The most numerous composition is called “Silent Evolution”. Here it is implied that the underwater sculptures will gradually grow coral, thus the exposition will be constantly changing. 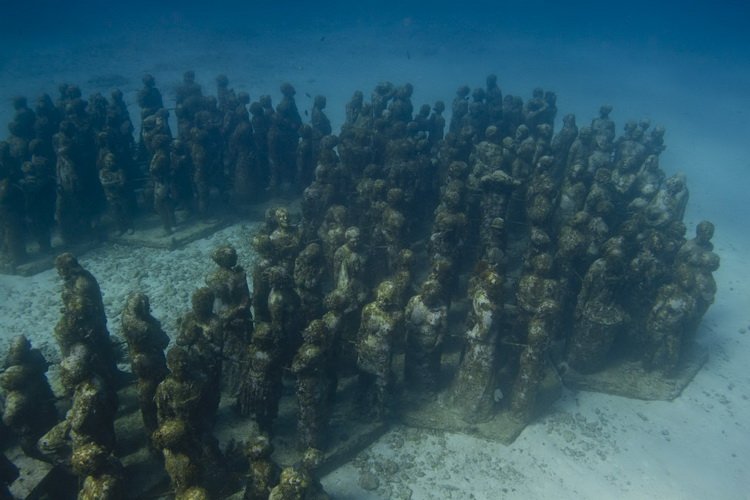 In front of you is “Man on Fire”. There is fire in the form of red coral on the body of the statue. 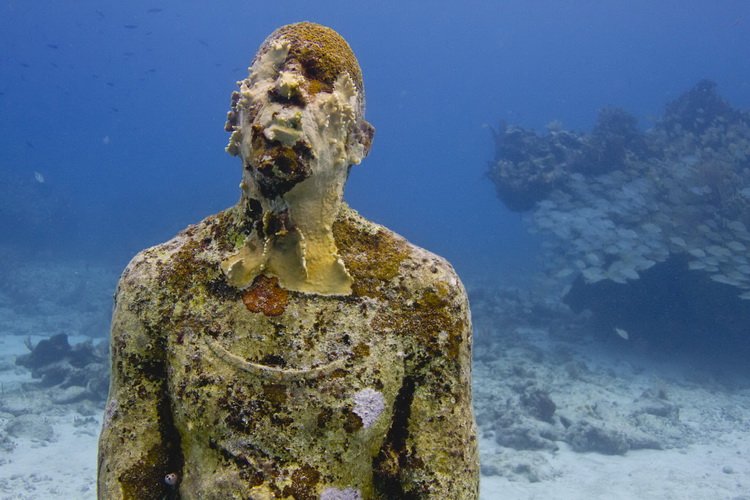 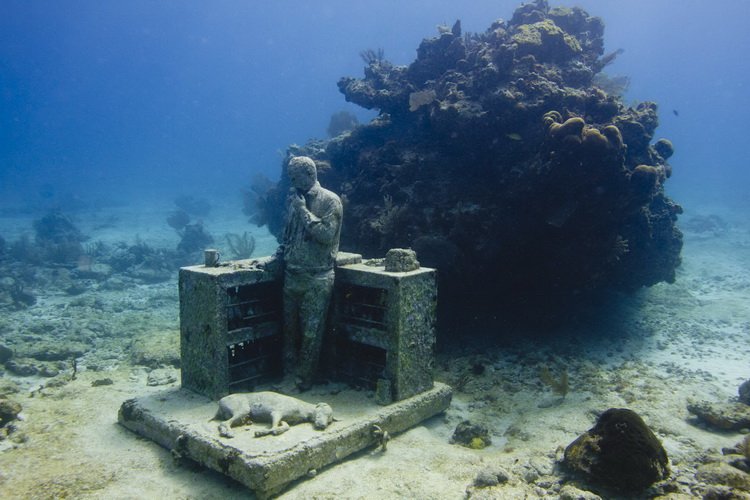 A gardener girl surrounded by pots of coral. 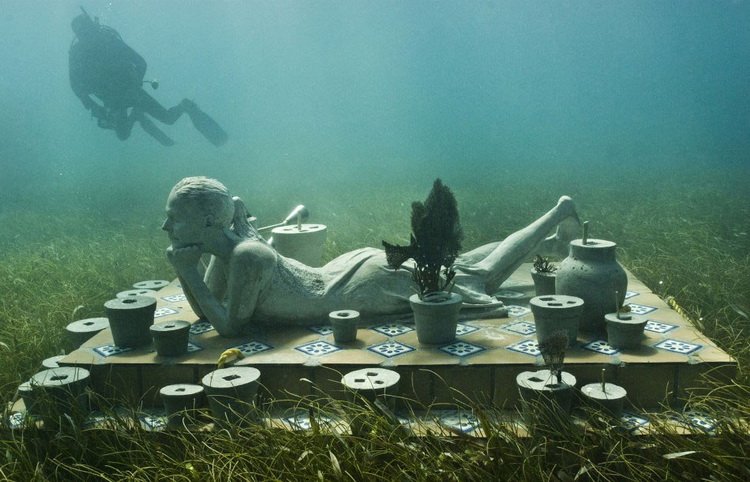 Well, many people will recognize themselves in this guy. 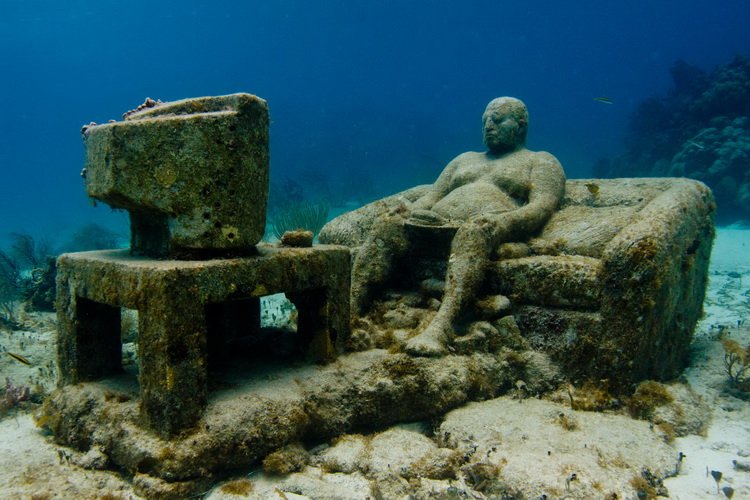 As you noticed, the faces of the statues are varied. They are not the sculptor’s fiction, as the casts are made of real people. Here are a couple of examples. 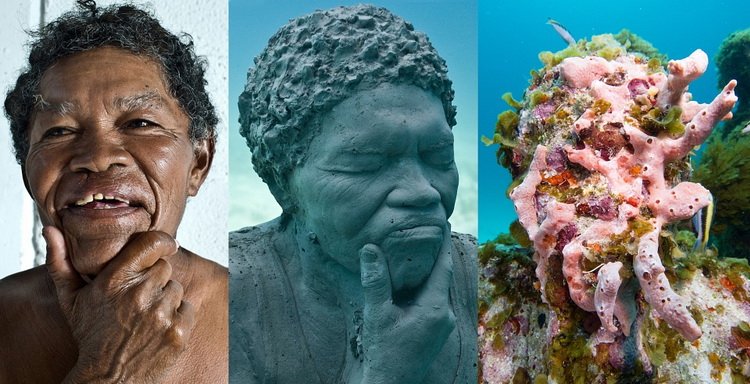 Scary at first glance underwater museum has some unnatural appeal, so that the attention of tourists is ensured to it. According to the museum itself about 750,000 people come here every year. The cost of visiting the museum starts from 50 dollars and depends on the way of visiting.

There are several ways of “visiting” the underwater museum. First, of course, is diving. You can just with a mask, snorkel and flippers, but it is better to use scuba diving. This method is probably the most spectacular. But if you want to visit an underwater museum and stay dry, then feel free to take a tour on a semi-submersible boat. Yes, there is such a submarine. It looks like a boat, in the hold of which there are large portholes for observing marine life. It is also called a boat with a glass bottom. 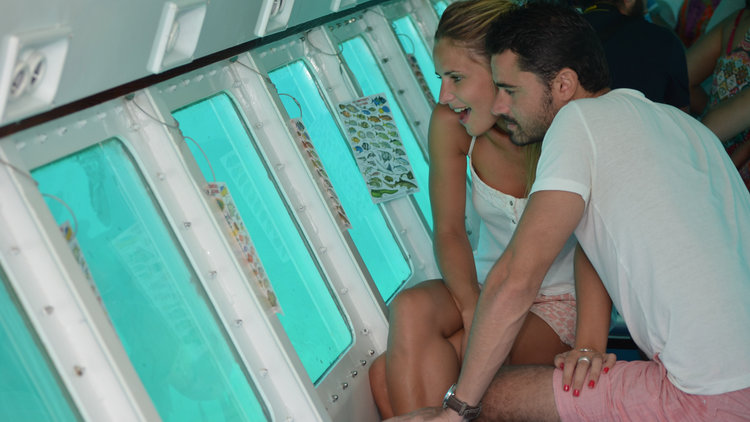 There is also a submarine for two people. You can look at the figures underwater even just from a boat or boat, because the water here is very clear and transparent. In addition to the underwater exhibit, you can also see turtles, parrot fish and angel fish.

Museum of Underwater Sculptures in Cancun 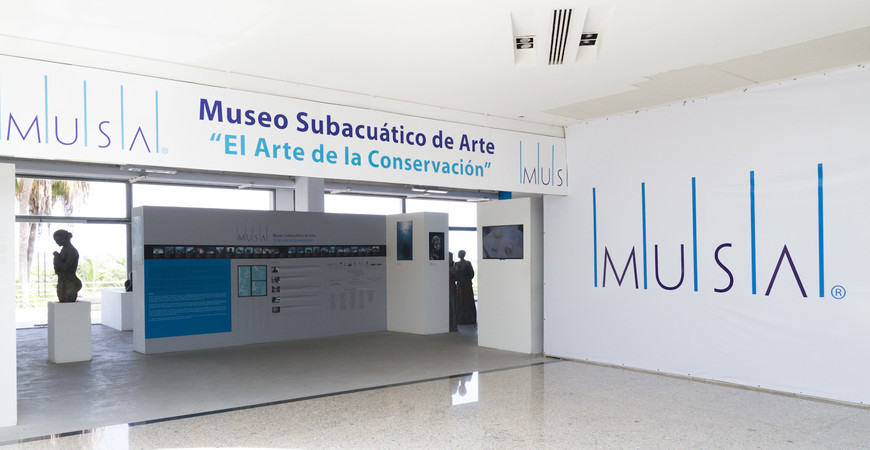 The Museo Subacuático de Arte in Cancun, also called MUSA, is dedicated to the conservation and appreciation of nature. It is the largest underwater museum. Its history began in 2008, when artists Roberto Diaz Abraham and Jason de Caires Taylor joined together with Jaime González Cano, director of the Marine National Park.

The core of Cancún’s MUZA Museum’s collection is a sculptural park underwater. When the institution opened in 2010, there were 491 sculptures on the ocean floor. Most of the works were created by the British artist Jason de Caires Taylor. A total of six artists authored the figures.

Panoramic view of the exposition of the Underwater Sculpture Museum:

The Underwater Sculpture Museum is not only a picturesque and unusual place. It has the important function of showing the complex relationship between humans and the environment. Many people, when diving, want to take something with them from the bottom of the ocean. More often than not, such souvenirs are corals, as a result of their systems being severely affected by human intervention. The underwater museum “MUZA” in Cancun should draw the attention of visitors to the fragility of the coral reef system and the need to protect it. The installed sculptures also become the basis for the formation of new corals and a home for sea creatures.

The sculptures are erected on heavy bases to prevent them from being swept away by the current. Special marine concrete is used as the materials. In reviews, visitors write that the MUSA Underwater Museum in Cancun is a very unusual, fantastic place. The sculptures underwater look surreal, a little frightening, but attractive, they make you think about the impact of man on nature. In addition to art objects, you can see colorful fish, turtles and corals underwater.

You can visit the Museum of Underwater Sculptures in Mexico by diving or taking a boat trip. The exhibits are housed in two galleries: a showroom near the Manchones Natural Reef and a gallery in the Nizuc area.

Those wishing to see the first room of the Underwater Museum of Cancun (Manchones) dive underwater with a special breathing apparatus, it is called scuba diving. The following types of visits are offered:

The price does not include a wetsuit. Dives are allowed from 12 years old, under 18 years old an adult must be accompanied. It’s also worth noting that you must arrive at check-in half an hour before departure.

The second gallery of Punta Nizuc is recommended to visit on snorkeling tours at a cost of $47. The duration is 3 hours. There are also other options:

Any visit to the museum’s galleries comes with an additional $12 conservation area tax. Tours can be purchased online or on-site, a few days before the planned dive.

The two galleries of the Cancun Underwater Museum currently house just over 500 sculptures. The most common are human figures, but there are other objects as well.

The Manchones Hall is located at a depth of 8-10 meters and includes 473 sculptures. Here is the largest composition, Silent Evolution. It consists of 450 human figures, which are really evolving by growing coral. The faces are made from casts of real people, the figures are made life-size. These people represent a peculiar evolution of civilization – you can see here the representatives of the Maya and modern people. There are special fragments called “Revolution”, “Conquest” and “Independence”. Another famous exhibit of the Underwater Sculpture Museum in Cancun is called “Man on Fire”. The flames are represented on the statue in the form of red coral. The sculptures “Bankers,” “Seascapes,” “Dream Collector” and others are also on display at the bottom.

Punta Nizuc Gallery is located at a depth of 2-4 meters. There are 33 objects collected here. These are the works of the artist from Cuba: “Understanding”, “Threshold”, as well as compositions by other authors: “The Last Supper”, “Time Bomb” and others.

The history of the MUZA Underwater Museum in Cancun is presented in the Visitor Center. Here you can see a garden with sculptures that replicate objects at the bottom of the museum, a workshop where underwater figures are created. A ticket costs $30, and there is a discount if you buy an underwater tour.

How to get to the Underwater Museum in Cancun

The Manchones exhibit hall is located near Isla Mujeres, and the Nizuc Gallery is in the south of Cancun, near the hotel area. The address of the Visitor Center of the Underwater Sculpture Museum in Cancun is Cerrada Las Golondrinas, Alfredo v. Bonfil, 24.

Ferries to Women’s Island depart from the following piers:

When buying tours to the Underwater Sculpture Museum in Cancun, you will be able to get detailed information on how to get to the departure point for the tour. According to reviews, transfers from hotels to the dive center are available.

You can also use cabs to get around Cancun: Uber, Executive Taxi Cancun, My Taxi Driver.