“The Valley of the Temples in Agrigento

Not far from the Sicilian city of Agrigento there is a wonderful valley, where among the blooming almonds rest the ruins of the majestic buildings built by ancient Greek colonists. It is the largest monumental complex of the whole “Great Greece”, included in the list of UNESCO World Heritage Sites in 1997.

The total area of the monument is about 1300 hectares. In the 6th century BC the Greek settlers founded the colony of Akragas which was conquered by the Carthaginians two centuries later. Witnesses to the city’s rich history include Doric temples, squares, pagan and Christian burial grounds, and a dense water supply system.

A bird’s eye view of the valley

Scientists have discovered the ruins of ten Doric temples and three sanctuaries in the valley, as well as many tombs, fragments of a system of fortifications and part of the ancient Roman quarter, built on the site of the ancient Greek. There were two market squares for meetings (agora in Greek) and an administrative building for the meetings of the city council – bulevteria. 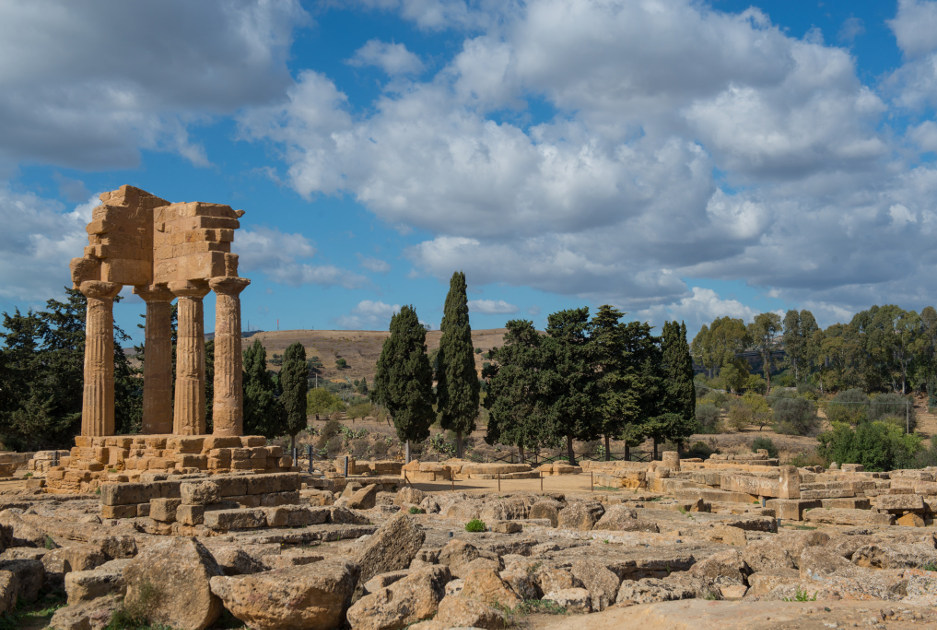 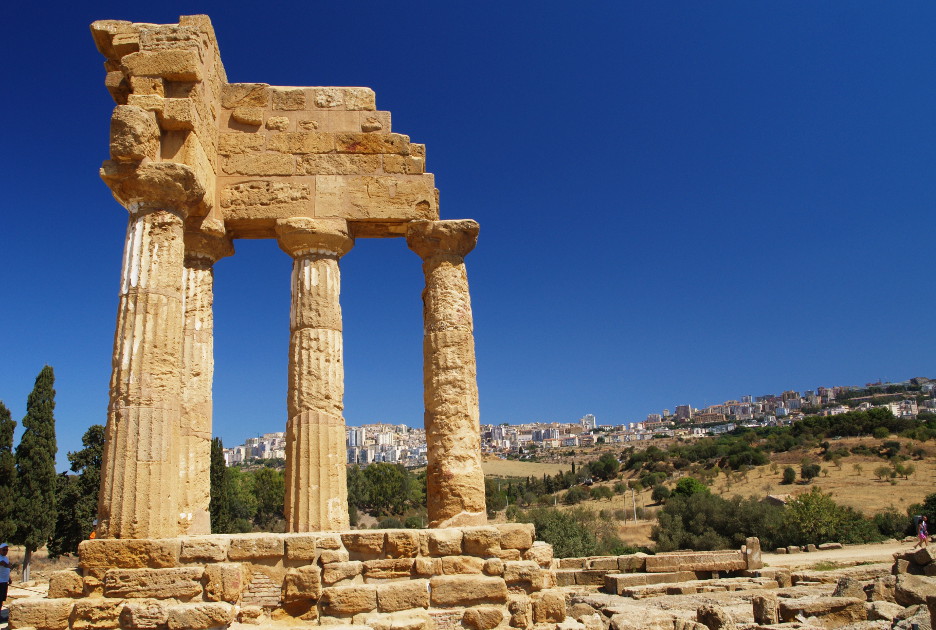 The temple of the mythical twin Dioscurs, Castor and Pollux, sons of Jupiter (Zeus) and the wife of the Spartan king Leda, became a symbol of Agrigento. 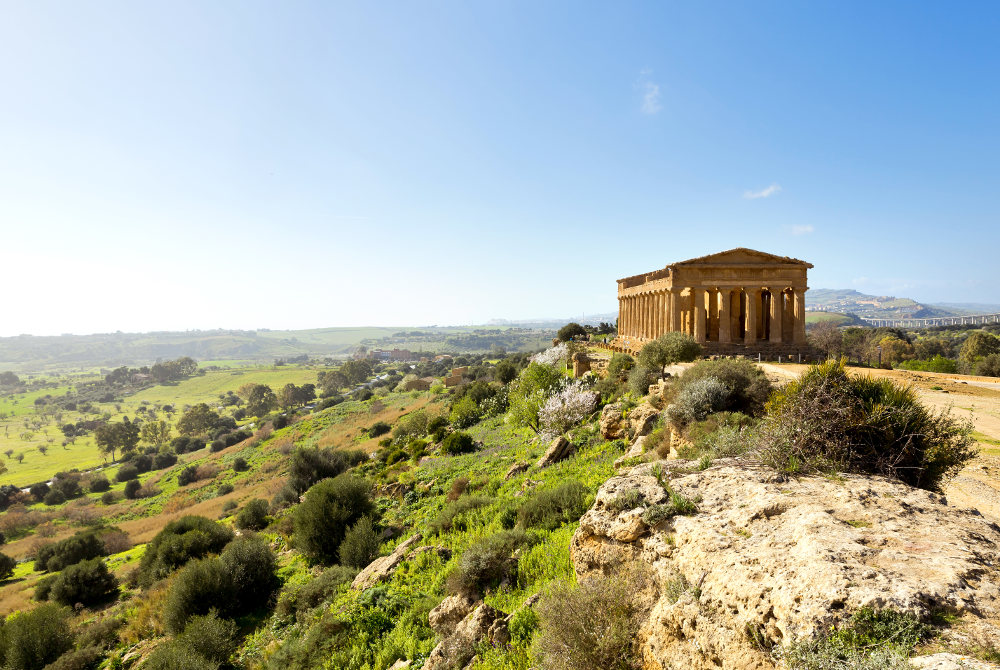 The temple of the goddess Concordia stands on a sacred road; it was built around the 5th century B.C. and is the best preserved of the complex. In the 6th century A.D. it was converted into a Christian church. Its original purpose was determined by an inscription found near the building. 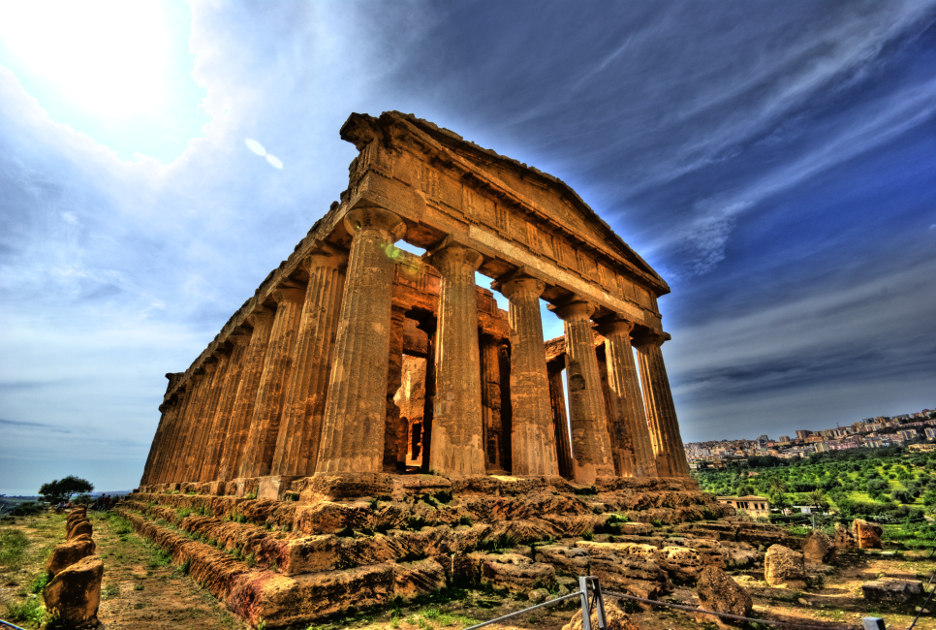 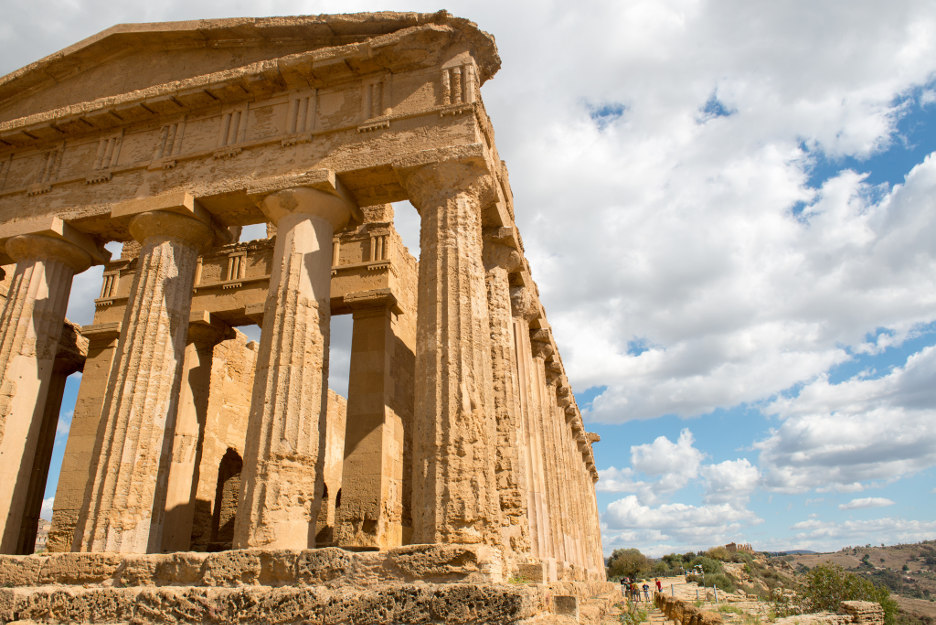 The temple of Jupiter (Zeus) was built in gratitude for the victory of the inhabitants of Akragas over the Carthaginians in 480 BC. A giant figure of an Atlantean made up of massive stone blocks has been preserved here. 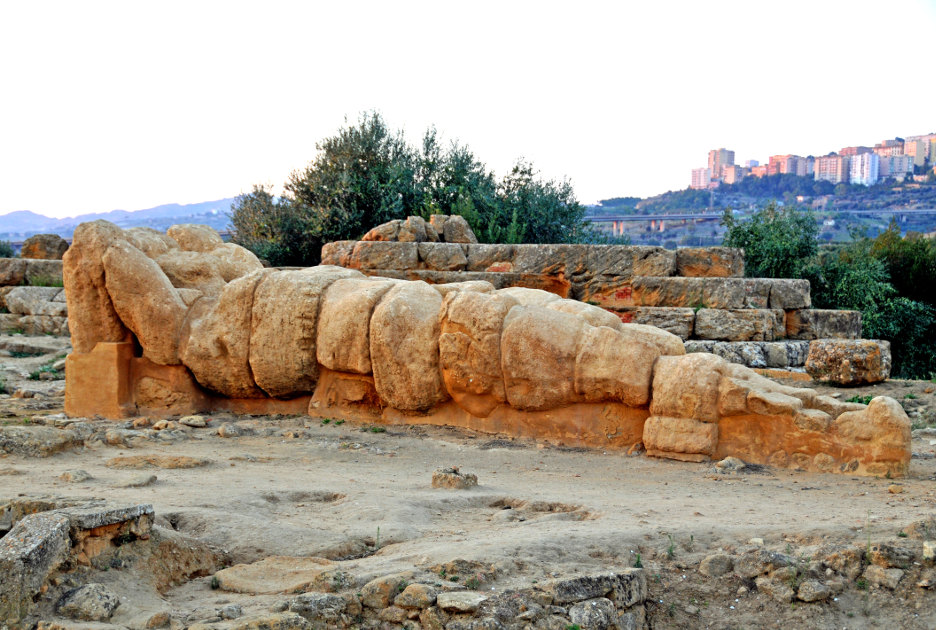 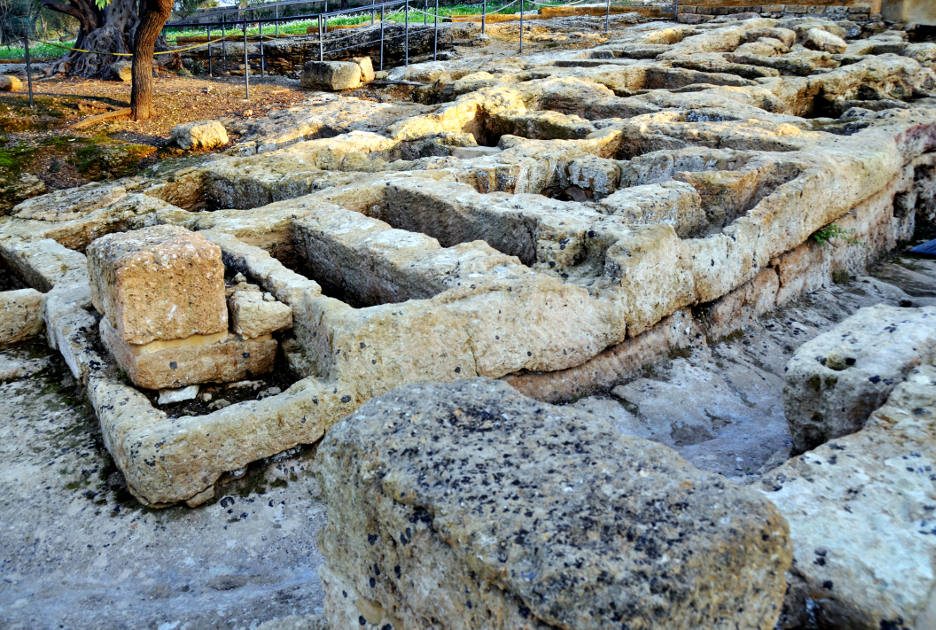 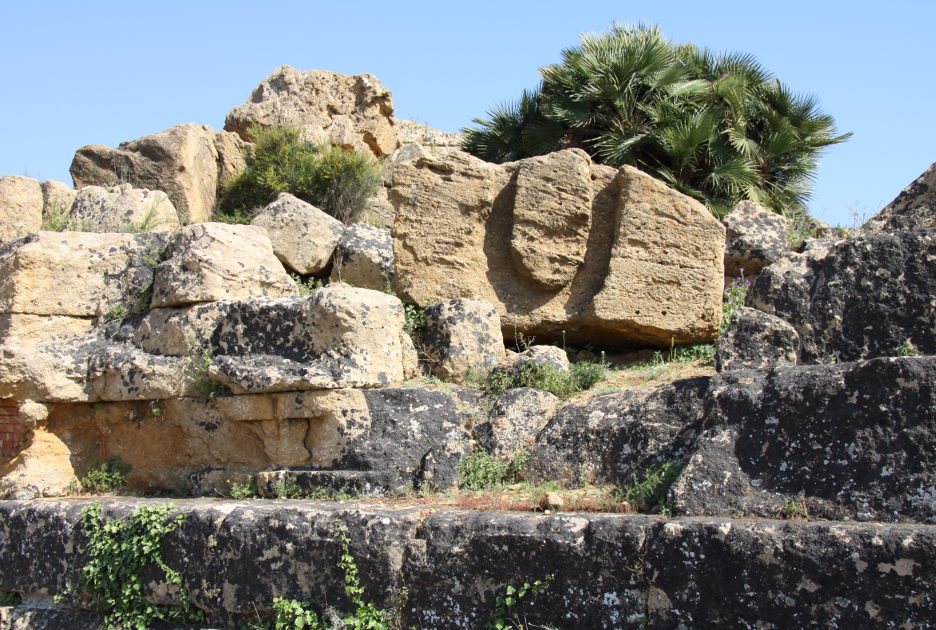 The Temple of Hercules (Hercules) is the oldest in the valley; the cult of the legendary hero was central to Akragas. The building housed a bronze statue of Hercules; the temple was destroyed by an earthquake, and today only eight columns remain. 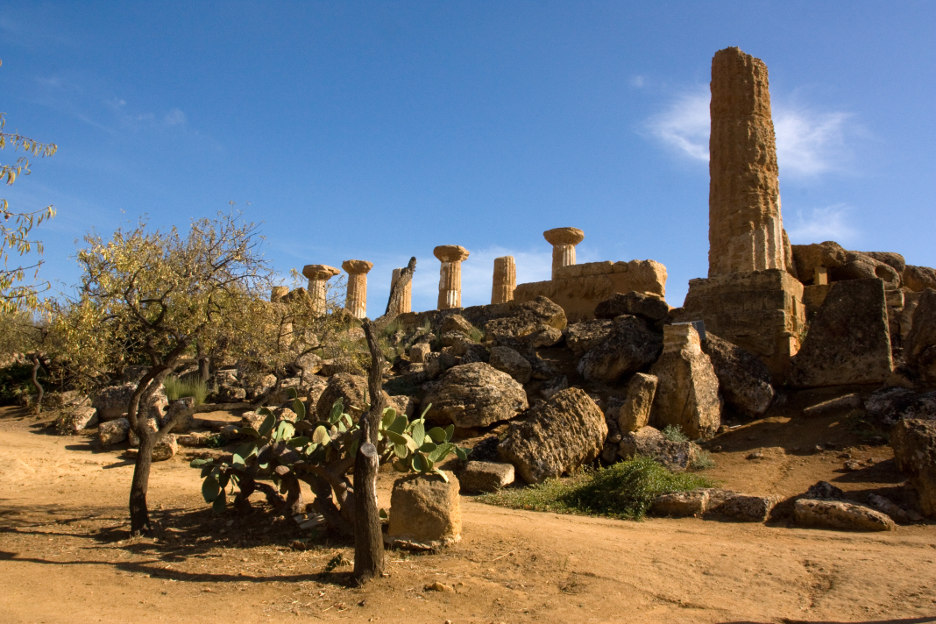 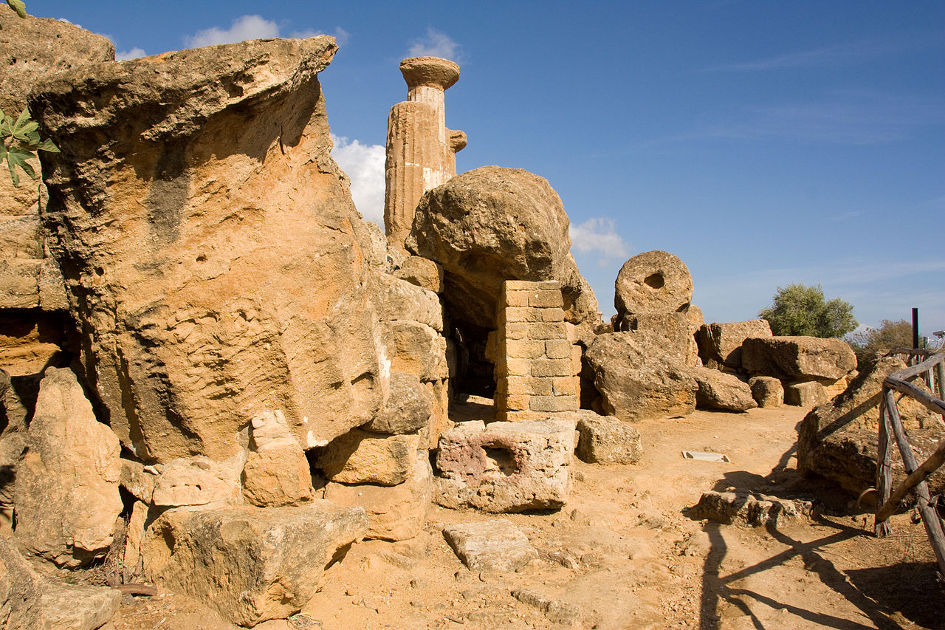 The Temple of Juno Lacinia (scientists have difficulty establishing exactly to whom the temple is dedicated, so the name is arbitrary) stands on a spectacular cliff, on the eastern side of the hill. The walls of the cella still show the traces of the fire: in 406 B.C. the temple, almost indistinguishable from that of Concordia, was destroyed by the Carthaginians. Near the ruins of the temple one can see a large altar for sacrifices (on the east side) and a stretch of road with deep marks from the wheels of carts that passed over it. 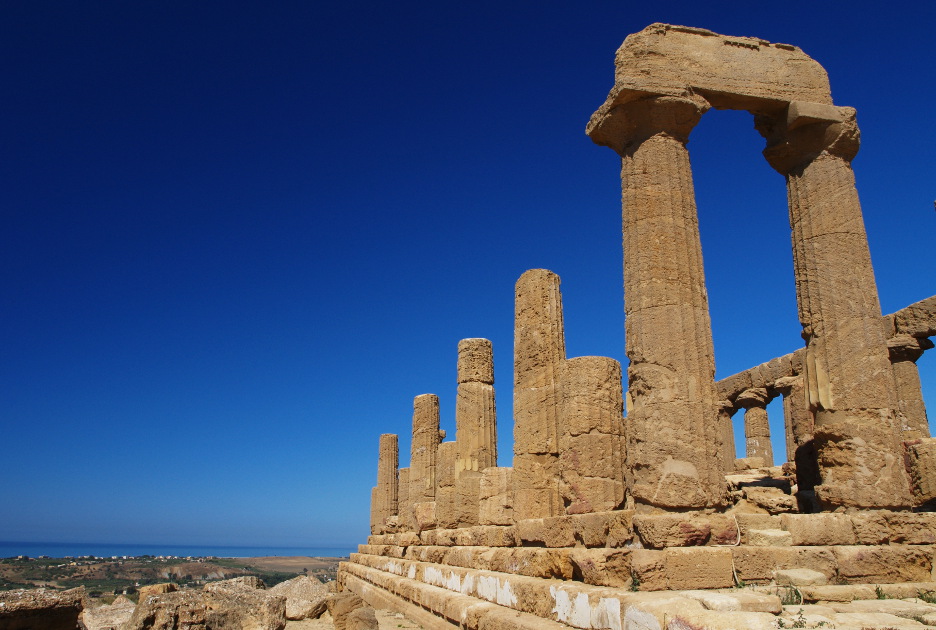 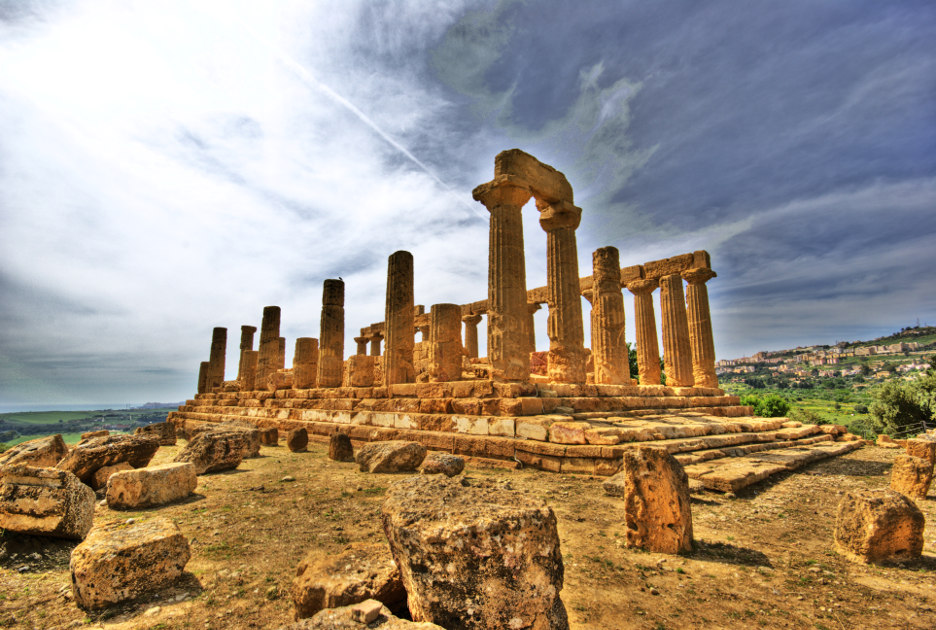 The temple of Aesculapius, the god of healing, was built far from the walls of the ancient city as a cure for the sick. The walls of the temple were covered with inscriptions of gratitude from those who were fortunate enough to be cured.

The temple of Vulcan (Hephaestus) was built in the fifth century BC and was apparently quite impressive in scale. Unfortunately, today very little is left of it. Ruins of an even older and quite small temple were revealed in the foundations.

Near the Golden Gate is the so-called “Tomb of Theron”. It has nothing to do with the ruler of Akraganta Theron: in fact, this pyramidal structure of tuff is a monument to the dead in the Second Punic War (Rome against Carthage, 218-201 B.C.). 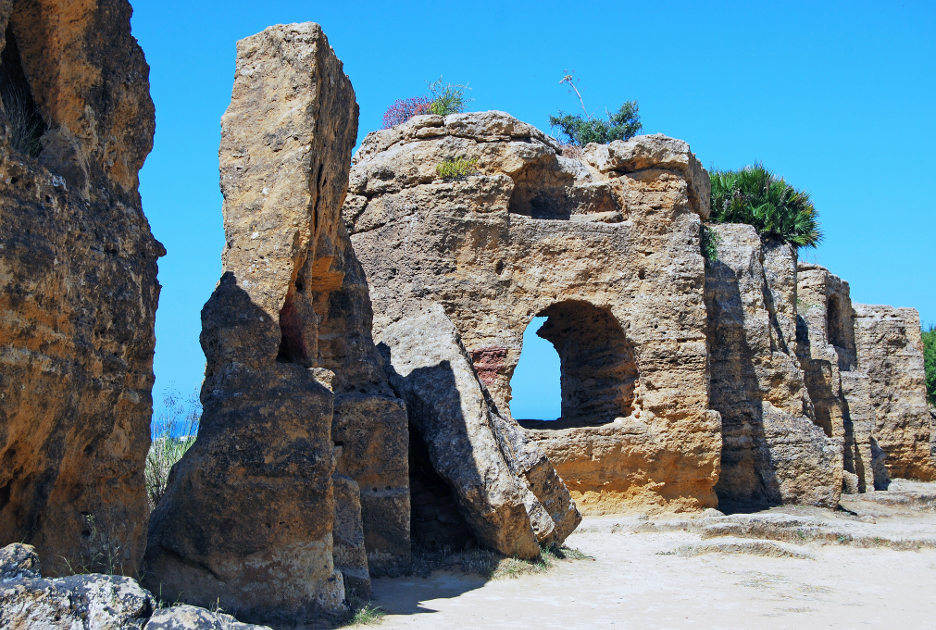 The agora, the market square that served as the main center of social life in Greek city-states, also makes a great impression. Also worth seeing are the “Council Hall” north of San Nicola Hill and the Gymnasium, where the citizens practiced sports, studied and spent their leisure time. 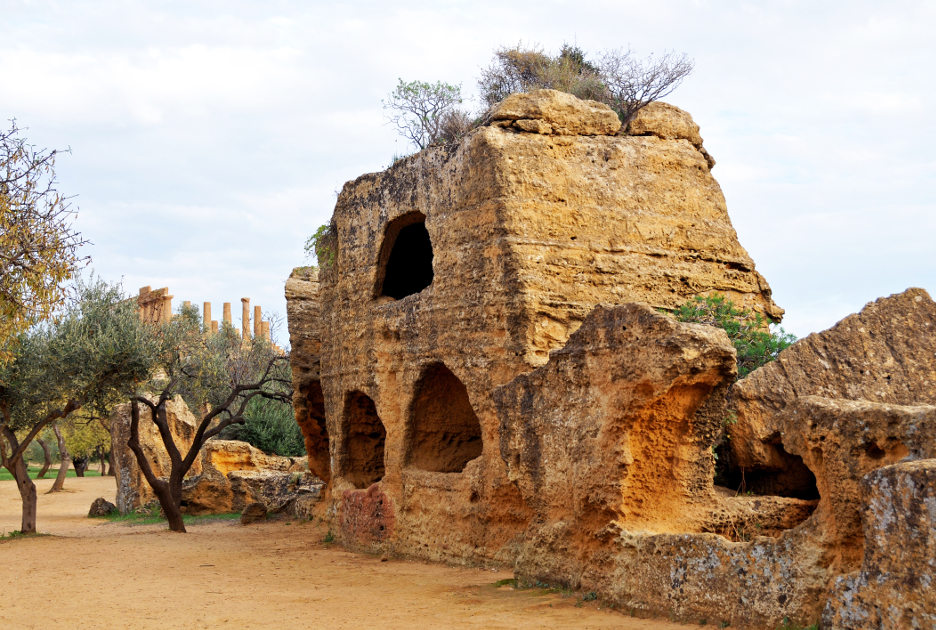 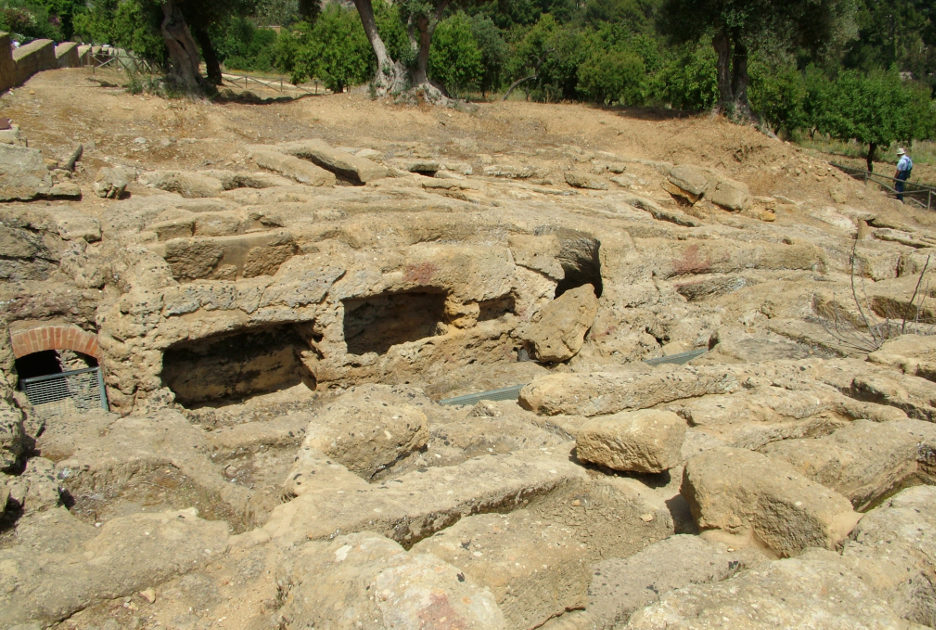 The valley has many Greek, Roman and early Christian necropolises just outside the ancient city limits. Also noteworthy are waterworks, floor mosaics from Greek and Roman residential quarters, and early Christian basilicas of the later era – for example, near the Temple of Concordia.

Valley of the Temples in Sicily

One of the most famous attractions of the island of Sicily and all of Italy, which is very popular with tourists is the Valley of the Temples.

This outstanding monument of ancient architecture was included by UNESCO in the list of world cultural heritage sites. This significant discovery was made by the Italian archaeologist Domenico Antonio Lofaso Pietrasanta at the end of the XIX century. In ancient times there was a large Greek city Akragas founded in 581 B.C. by settlers from the island of Rhodes, but it reached its peak under the tyrant Falere and became the center of economic life in Sicily. The city was situated in a very advantageous position and was therefore attractive to other nations. During the Carthaginian attack in 406 BC, the city was badly damaged and was under the yoke of Carthage for another 20 years until the inhabitants, with the help of Corinth, drove the invaders out. In 210 AD, Akragas was occupied by Roman soldiers and renamed Agrigentum, but in the seventh century, the Romans were forced to leave the city because of the threat of invasion by Arab tribes, they moved to the hilltop nearby, here is now the modern city of Agrigento.

On the site of the once mighty city of Akragas, there remains the Valley of the Temples of the ancient Greek gods, most of which date back to the V-VI centuries BC. There are temples of Zeus, Hercules, Hera, Vulcan, Asclepius, and other gods.

This temple is dedicated to the ancient Greek hero Hercules or Hercules and is considered to be the oldest in the Valley of the Temples. There used to be 38 columns supporting the vault of the temple, but now only 8 of them remain. Hercules, a half-man, half-god, son of Zeus who ascended to Olympus after his death, was one of the most venerated gods in Agragas.

The ruins of the temple of Hera or Juno, the supreme goddess of Greek mythology, are near the wall that protects the city and the temple. The temple has survived a lot – first a fire in 405 BC, then, in the Middle Ages it was destroyed by an earthquake.

The temple of Zeus, chief among the Greek gods is located in the western part of the Valley of the Temples. The construction of this temple was timed to commemorate the victory over Carthage in 480 BC, but it was never completed. Today, the remains of the statues of the mighty Atlanteans can be seen on the site of the temple.

The temple of Concordia or Concordia is the best preserved of all, and it is believed that this was due to the fact that in the VI century there was opened a Christian church. Locals who had converted to Christianity protected the former temple from destruction. After the church was partially demolished in 1748, the arches, visible through the holes in the roof, remained.

The Temple of Vulcan or Hephaestus was built in the 5th century BC. Archaeologists believe that it is one of the oldest buildings in the Valley of the Temples, after the Temple of Hercules. Unfortunately now it is also the most poorly preserved building.

In the Valley of the Temples there is the Archaeological Museum, which contains artifacts found during excavations. The most famous exhibit is the statue of the titan Atlantean, 8 meters high, that was found on the site of the Temple of Zeus, as well as a rich collection of ancient pottery.

Tourists can visit the Valley of the Temples and see these beautiful monuments of ancient architecture during a trip to the island of Sicily in Agrigento, in the city there are many other attractions, as well as swim in the warm sea.