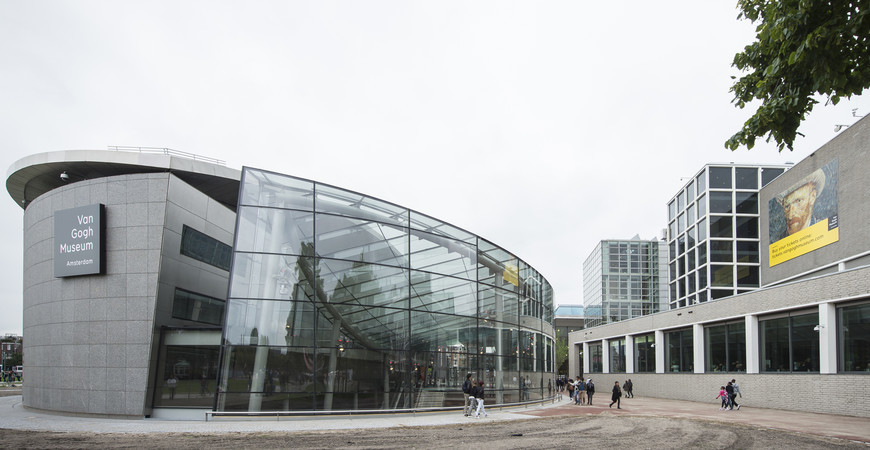 The Van Gogh Museum in Amsterdam has the largest collection of drawings, letters and paintings of the artist in the world. It displays not only his works, but also those of his friends – Gauguin, Bernard and others, as well as later masters. It is the second most popular place to visit in the Netherlands and worth seeing for all tourists.

After the creator died, in 1890, all of his work remained in the family of his brother Theo. But then he and his wife Joan died. She cherished the collection, and organized the correspondence by date. The inheritance passed to their son, who initiated the creation of the museum. Vincent Willem van Gogh first exhibited his canvases at home, then in the city museum, and then negotiated with the authorities to allocate land to build a separate cultural facility.

Gerrit Rietveld became the architect. Construction took a long time and was not completed until 1973. The building from the outside is made in a modern style with glass decoration. Inside, an understated design was chosen to focus all attention on the works of art.

Tickets for the Van Gogh Museum in Amsterdam

To avoid creating a queue, tickets are only sold online on the official website or special ticket booking sites. Here you choose a specific date and time. It is possible to buy 4 months before the visit. They give a limited number of admissions, so plan your trip in advance.

With the ticket you have the right to visit the permanent and temporary exhibition. Special conditions are valid for groups of over 15 people. For shopping there are souvenirs available in the online store. You can also order a guide for 95 euros:

Starts every half hour. Unfortunately, there is no Russian language, but there is English. But a multimedia tour is available for 5 euros extra.

If you want, you can combine a visit to the Van Gogh Museum with a cruise on the canals of Amsterdam.

You can book a tour, as well as other tours in the Netherlands, not only being on site, but also in advance, using the service “Experts.Turister.Ru.

Sight works every day without breaks and weekends. Closing hours change on some dates and holidays:

Allow a minimum of 1 hour and 15 minutes to view the exhibit. Most visitors come between 11:00am and 4:00pm, so it’s best to arrive in the morning or after 4:00pm. The last entrance is open 30 minutes before the end.

Paintings at the Van Gogh Museum

The exhibition halls are divided into six main departments, which can also be dated inside.

The entire oeuvre of Vincent van Gogh . These are letters, drawings and paintings by the artist, beginning in 1864, the most recent in 1890. The total number is 1,439 copies. It is accepted to divide into periods:

Friends of the artist whose work he knew and many were inspired by:

A separate exhibit is devoted to the artists who were inspired by the artist . This is read in the choice of color, subjects and technique. The collection is expanded and temporary exhibitions take place. One can see here: Francis Bacon, Edvard Munch, Frank Auerbach, Willem de Kooning and others.

Works on paper acquired by the museum in 2016 from the masters Henri Gabriel Ibels, Maurice Denis and Ker-Xavier Roussel.

A large part of the great creator’s work was dedicated to Paris, so you’ll see here a collection of French prints from 1890-1905.

Vincent and his older brother Theo were interested in Japanese prints. They’re on display here in a separate exhibit.

The major masterpieces are.

Various cultural events are held within the museum. An art lab and library are also open. The designers were also able to recreate the environment in which the great master worked. On this page you can download a detailed plan of the museum rooms.

How to get to the Van Gogh Museum

The cultural object is located in the southern part of Amsterdam on the Museumplein square, which gathered on its territory several interesting museums at once. You can reach this place by public transport:

Most locals prefer walking or cycling. Rentals are available anywhere in the city at special drop-off points.

The cab in the city is considered one of the most expensive in Europe. App for ordering TCA Taxi.

I remember my younger sister collecting artist magazines as a child. She had a lot of them, but for some reason I remembered only one for the rest of my life – the green one with sunflowers on the cover. It was about a very lonely but insanely talented Dutch painter Van Gogh. 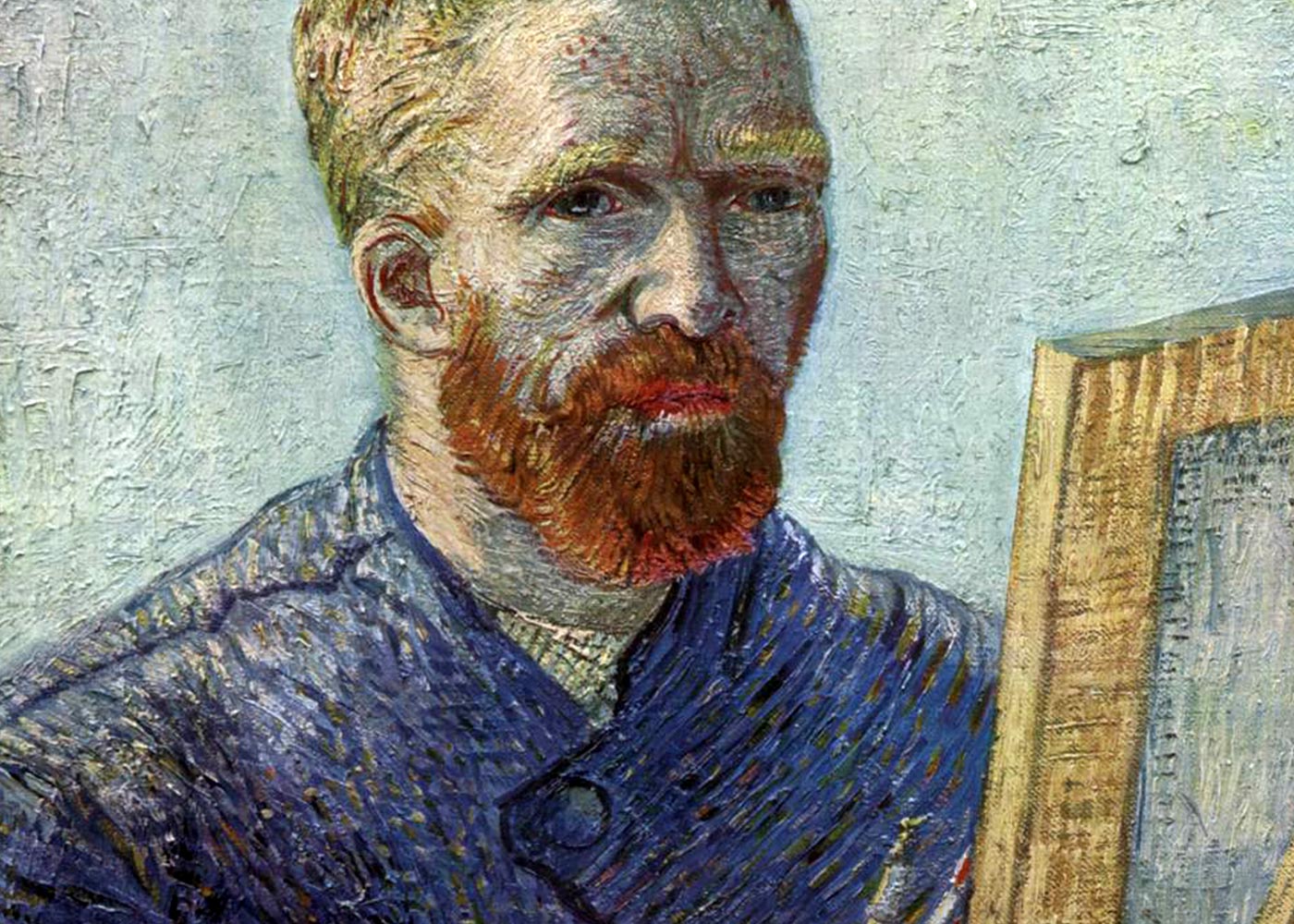 Ten years have passed since then. I came to Amsterdam for the first time and found out that exactly there is the biggest collection of paintings of the artist of my childhood, the same artist, whose “Sunflowers” I naively tried to repeat (carefully following the instructions of the same magazine). I also became interested in the biography of his complicated life – I read Van Gogh’s letters, watched films about him, lost myself in the gallery among the irises, straw hats and eyes of peasant women, but I still do not understand who he was… A madman? A genius? Or a subtle painter in the broadest sense of the word?

Vincent Van Gogh is the pride of the Dutch. And the museum of his paintings in Amsterdam is one of the best art museums I’ve ever been to. And stop picturing the boring halls of art galleries in your mind. The Van Gogh Museum is interactive, trendy and, well, very interesting.

Where and how to buy tickets

The most important advice – buy tickets online in advance (and not just for the Van Gogh Museum) . You can, of course, be lucky. Theoretically there is a chance that you arrive at any time and not stand in a huge queue of people wanting to admire the famous “Blossoming Almond Branches” or “Potato Eaters”. But that’s probably not possible. There is always a queue at the museum. And given the unpredictability of the Dutch climate, people most often wait their turn to enjoy the beauty in the rain or snow, blown by the refreshing sea breeze. 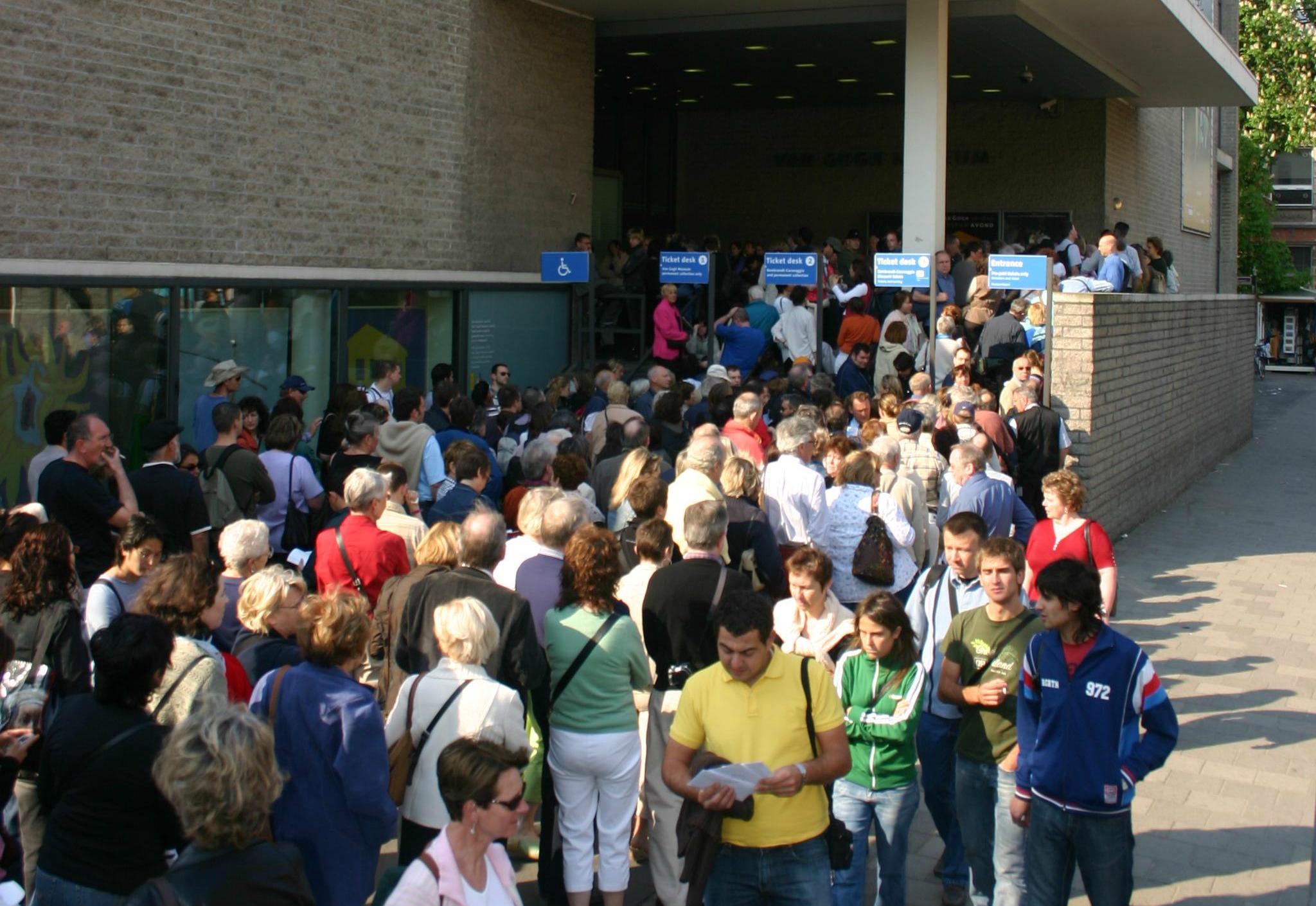 You can buy tickets on the museum’s official website (click here for tickets) . It is, unfortunately, only in Dutch and English. If you’re not sure of your English – right click “translate into Russian” to help! (I checked: on the site of the museum, it translates correctly). When buying, specify the exact date and time you want to visit the museum. You can be late by half an hour at most, but it’s better to come in advance. Tickets, by the way, you can buy up to four months before the day of the visit. But they are valid only for the selected date and time. They can be printed out, or you can just show the QR-code (the electronic version of the ticket on your phone or tablet) at the entrance. Note, the museum staff will ask you to show the original code – the ticket in the mail or in your saved documents – but not a screenshot. In any case, there is free W-Fi catch throughout the museum. You will always have access to your ticket, just charge your phone. 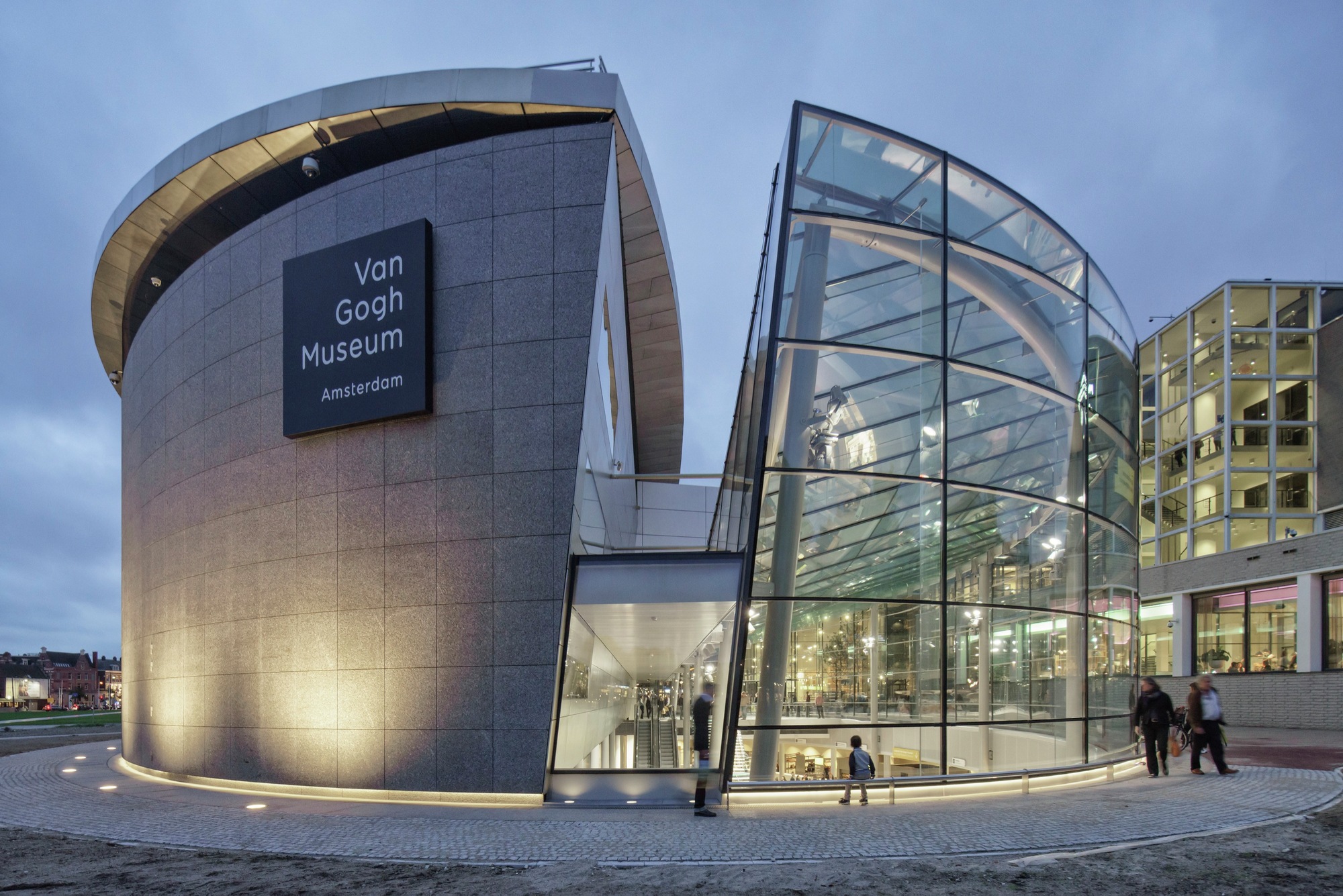 A ticket costs 17 euros (both on the website and at the museum’s box office). Visitors under 18 years of age and owners of museum cards – free admission (this Museumkaart, I Amsterdam city card, Rembrandt card and others, which in the Netherlands entitles to free entry to many museums). Also when you buy a ticket you will be offered to donate any amount to charity (the money goes to scientific research, restoration of paintings and the opportunity for children, pensioners and disabled people to enter the museum for free). This is optional.

Is it worth taking an audio guide

In addition to the admission ticket, you can buy an audio guide in advance. The price for adults is EUR 5 and for children from 13 to 17 years old EUR 3. The audio guide is available in 10 languages, including Russian. Despite the high ticket price, I recommend you not to save on the audio guide. It’s made amazing.

First, you can choose from three routes: explore the museum on your own, run through the main paintings, or explore Van Gogh’s work with your family. Thanks to the audio guide, you will not only view the paintings, but also learn:

The audio guide is not only the lecturer’s narration, but also mini-games, assignments, and excerpts from letters. I was thrilled! 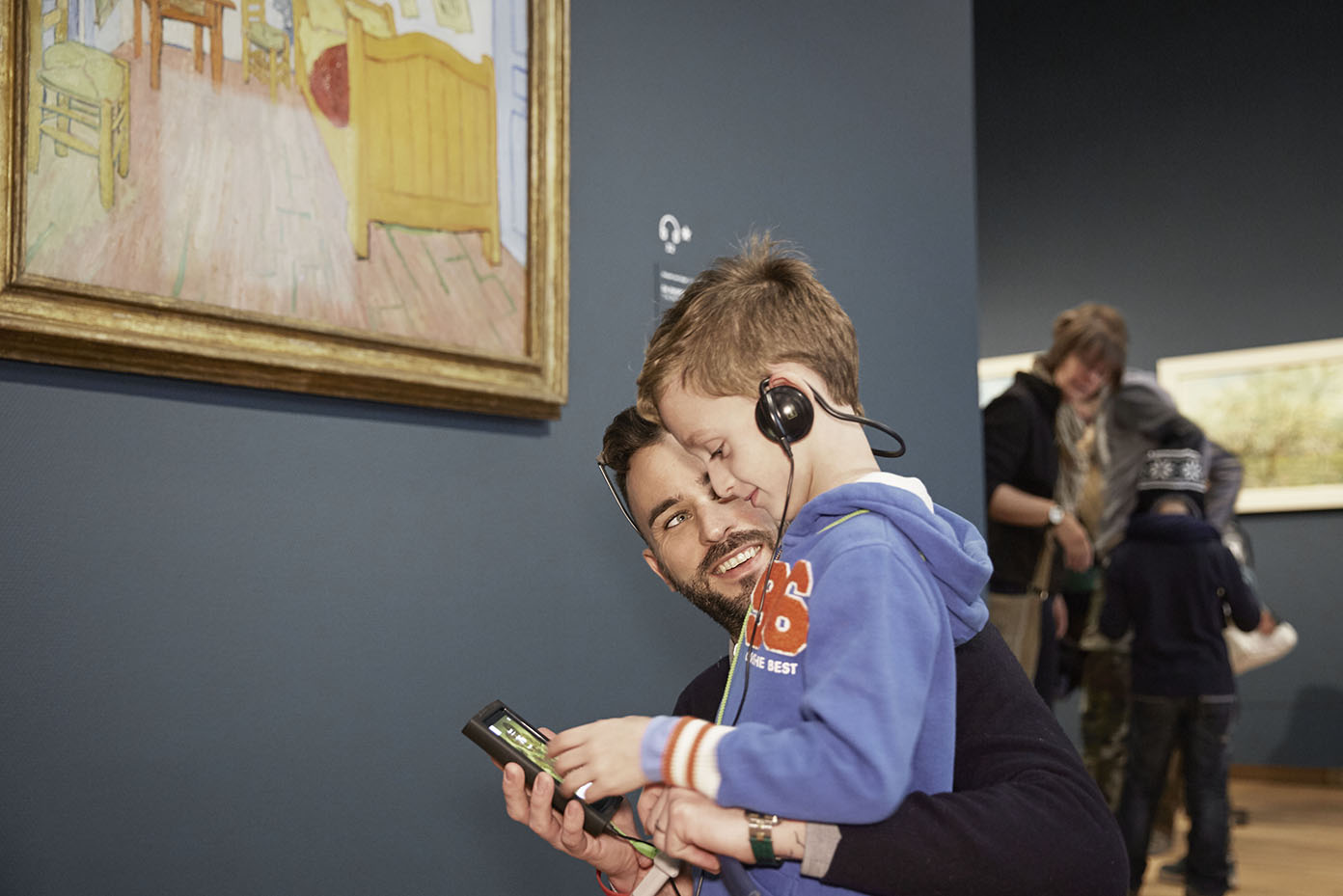 Now even Fridays after seven in the evening the museum organizes free tours, working DJ, offering drinks. Haven’t tried it myself, but it sounds interesting for a painting museum, huh?

The Van Gogh Museum is located at Museumplein 6, a museum plaza that houses four museums at once:

From Amsterdam Central Station I walked to the museum – only half an hour, but the way goes through Dam Square, the very letters “I Amsterdam” and the many beautiful canals. 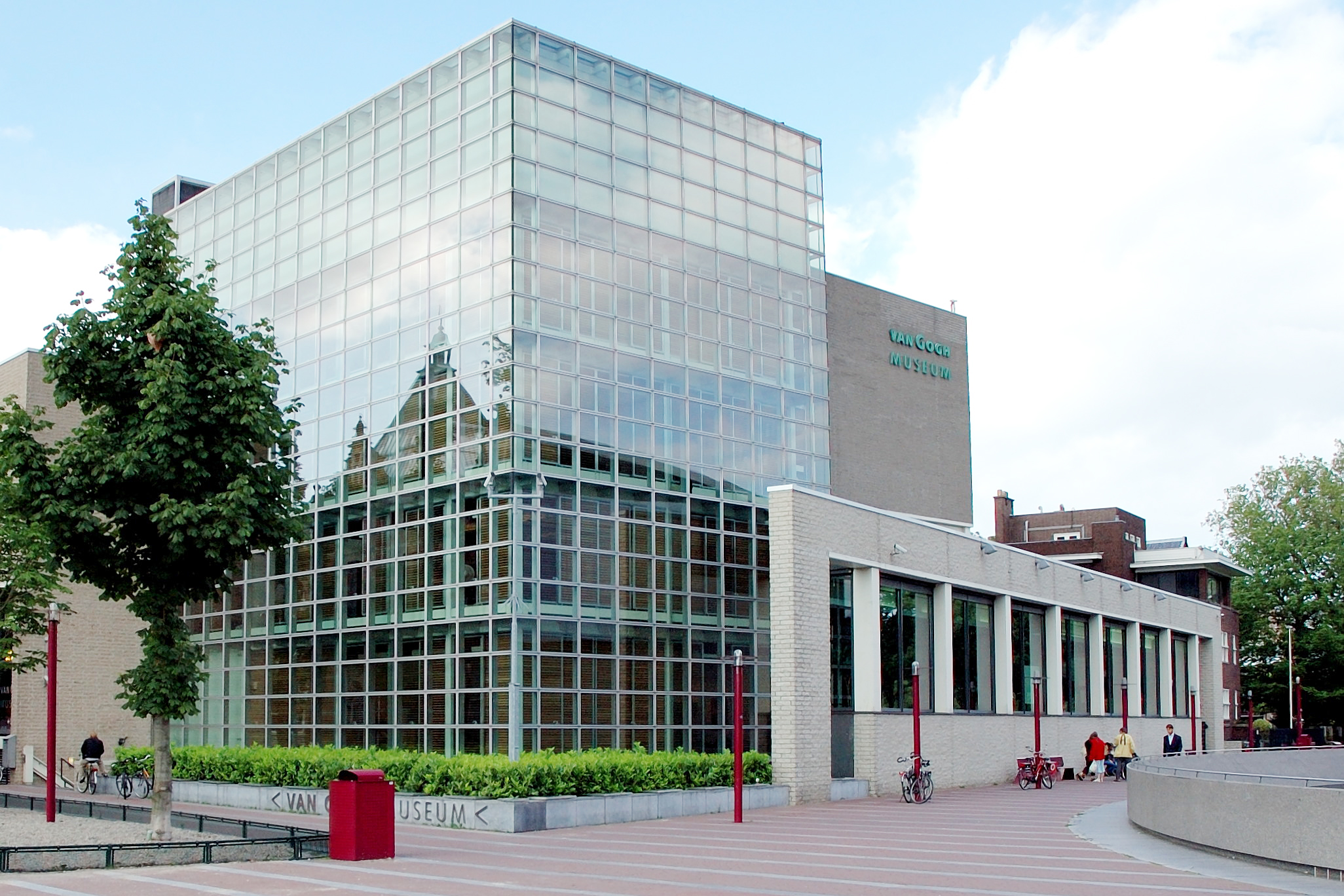 The Van Gogh Museum in Amsterdam has the largest collection of the artist’s paintings in the world, including “The Yellow House,” “The Potato Eaters” and “The Shoes. The museum exhibit is in chronological order. So you’ll go through his life together with Van Gogh: starting with his early works, moving to Paris, then to Arles, Saint-Remy and finally to Auvers. 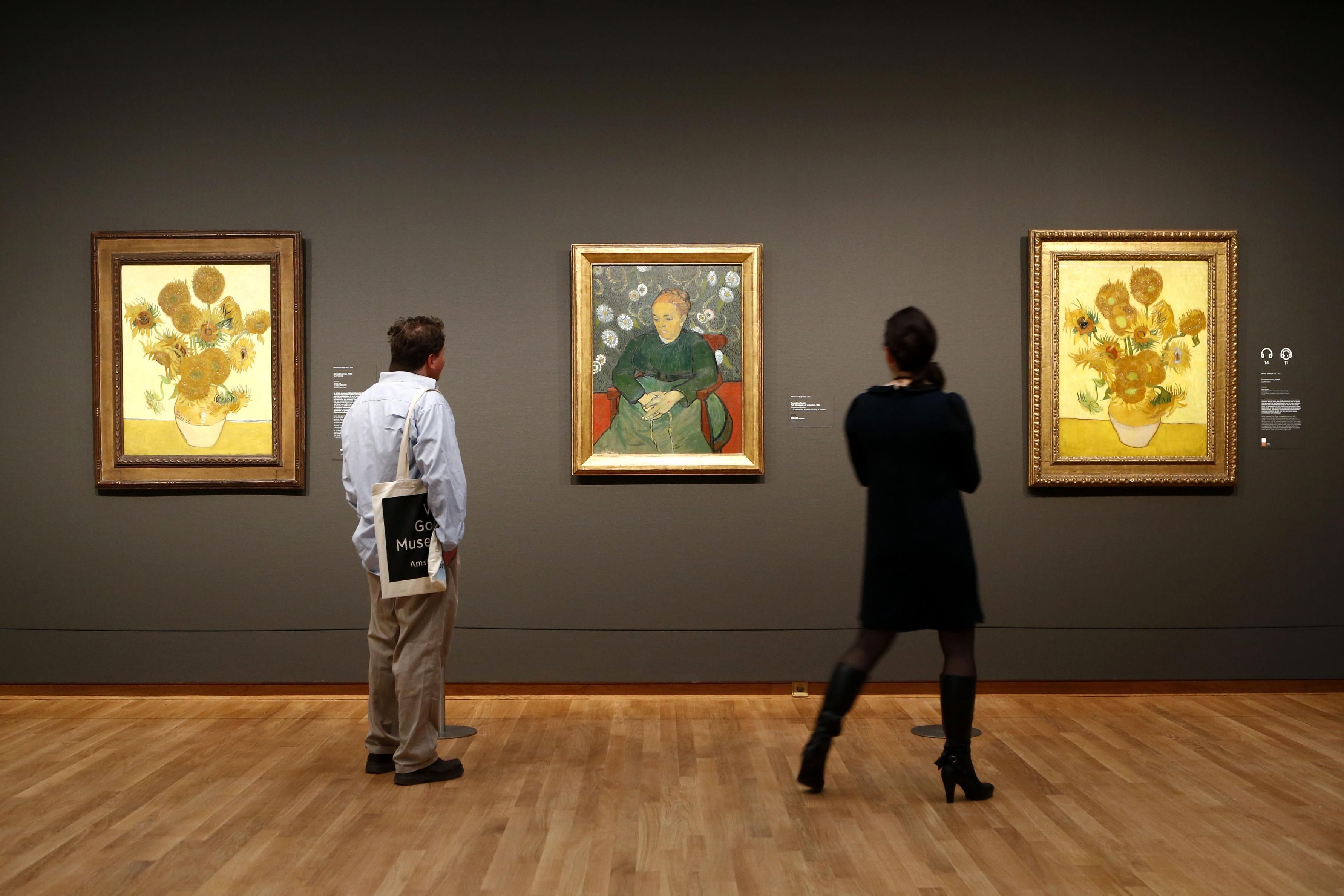 A souvenir of sunflowers

You can’t take photos in the museum (and why should you?). But there are special photo areas between the floors for all those who can’t wait to post new photos in Instagram

How much time to leave at the museum

The museum’s official website says it takes an average of 75 minutes to view the exhibits. Average. Personally, I walked there for more than three hours, afraid of missing something, listening to something, not having time to take notes. If you are as greedy for information as I am, save yourself a whole day. You’ll come out of the museum tired, but happy.

I always try to see/read about a place in advance before I go anywhere. And not just articles on tourist sites, but something art-documentary. For example, before going to the Van Gogh museum, I watched his biography film from the BBC. It was interesting. After I went to the museum and felt like the main connoisseur of his art, although it is certainly not so. In advance (or after) check out the museum website – you’ll find a lot of stories about Van Gogh. They’re in English, but very well done. I applaud the creators of the site. The museum also periodically hosts lectures and games. You can find out about them at the information desk or on the website.