The Vankor field on the map is one of the largest oil and gas fields in the Russian North. It was discovered back in 1988, but its active development began only a few years ago. In 2008-2009 a technological complex was built. The official launch of the Vankorskoye field took place on August 21, 2009 with the participation of the President of the Russian Federation.

In 2010-2012 the field changed its owner. Instead of LLC Yeniseyneft (a subsidiary of Anglo Siberian Oil Company), the field became owned by Rosneft, which invested $5 billion in the development of the field. At the same time the revenues from gas and oil production, according to the analysts’ expectations, were supposed to amount to at least $80 bln.

Where is the Vankor field

The Vankor field on the map is located in the northern part of the Krasnoyarsk region, in the Turukhansk and Taimyrsky Dolgano-Nenetsky districts. Accordingly, it consists of two parts.

For the successful development of the Vankor field a camp of the same name was built, which can accommodate up to 3 thousand shift workers in the summer season.

The Vankor block fields also include:

In addition to these areas, the portfolio of Rosneft and its subsidiaries includes 14 more license areas belonging to the Vankor cluster. It is Rosneft’s third-largest oil asset after Yuganskneftegaz and Samotlorneftegaz.

In 2014, 10% of the company’s shares (Vankorneft, a Rosneft subsidiary), managed by Igor Sechin, were sold to the Chinese group CNPC. Experts estimate this stake at $1-1.5bn.

About 70% of the hydrocarbons of the Vankor oil and gas fields will go to China, according to the contract, via the pipeline along the route “Eastern Siberia – Pacific Ocean”.

On the spot the oil is transported through a 556-kilometer branch of the pipeline, with a pipe diameter of 820 mm. The branch runs from Vankor to Purpe and then joins the Transneft trunk system.

The Vankor field: characteristics of the oil 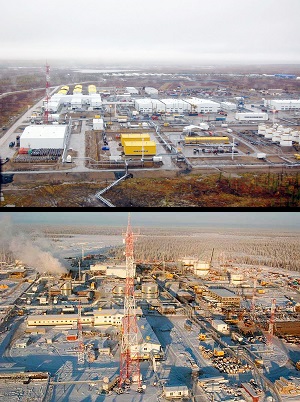 In the Krasnoyarsk region, where the Vankor field is located, recoverable oil reserves were found, which as of 2014 amounted to 500 million tons of liquid hydrocarbons and 182 billion m3 of gas.

Gas and oil production at Vankor in 2013 was a record 21.4 million tons. Now the company aims to steadily produce about 25 million tons per year, and by 2020 it is planned to raise up to 50 million tons annually from the ground.

It is planned to operate the Vankor field for another 35 years. For this purpose the number of production wells, drilled predominantly by the cluster method, will be brought up to 425.

That’s why it was assigned a special ESPO (Eastern Siberia-Pacific Ocean) category, which normally trades at a premium to the benchmark. But in order to become a benchmark, this oil grade must be traded at the same volumes as Brent.

The Vankor field: characteristics of the development area

The Vankor field can be found on the map on the left bank of the Bolshaya Kheta, in the basin of its major tributaries – the Lodochnaya and Pokoinitskaya. The area is a heavily swampy plain, mostly covered with forest, with numerous small lakes and winding streams.

Movement by land vehicles outside the concrete road or embankment is possible only on special swamp trucks. As a rule, delivery of shift workers and cargo to the Vankorskoye field is made by helicopter from the nearest settlements: Igarka, Tarko-Sale or Novy Urengoy.

In winter, when swamps and water bodies freeze up, seasonal roads – winter roads – are laid for land transport.

On the territory of the Vankorskoye field there is an oil gathering center (three pumping stations, each is able to process 7,5 mln tons per year), an oil reservoir with the capacity of 180 thou. cubic meters. Industrial drilling has begun here, and preparations are underway for the launch of a gas turbine station and intra-field branches of water, gas and oil pipelines.

The Vankor field on the map of the Krasnoyarsk region

The Vankor field is rich in oil and gas reserves, an ever-growing and developing industrial site located above the Arctic Circle in permafrost conditions.

The Vankor field is an industrial site that produces oil and gas. It is located in the middle of the tundra in the north of the Krasnoyarsk region and is part of the Vankor oil and gas production block. There is a shift camp at Vankor on the development site. The nearest settlement to the field is Igarka, a port town on the bank of the Yenisei River, which is 140 km away.

How to get to the field

The Vankor field is located beyond the Polar Circle. There are no hard surface roads. One can get to Vankor this way:

Without a special pass from Vankorneft security service it is impossible to get to the field. There are guarded checkpoints at the entrances, video surveillance is maintained all over the territory of the field. Photography and video recording is forbidden.

Weather and climate in the region

The area where the Vankorskoye field is located has a subarctic climate. There are strong cold winds, it is relatively dry with not more than 300 mm of precipitation a year.

Winter lasts 9 months with average temperatures of -30 degrees and below. In summer in June-July the air is heated to +10, but negative values from 0 to -5 are possible.

Throughout the winter, polar night reigns. Only in the summer months the sun rises above the horizon and slowly floats along it, the polar day occurs.

READ
Where is the country of Monaco, photo and description

The harshness of the climate determines the landscape of the forest tundra. The soils are permafrost, covered with mosses, lichens, and sparse dwarf trees. The area is heavily swamped.

History of the settlement

The Vankor field was discovered in 1988 by Yeniseineftegazogeologiya. The first attempt to drill an exploration well ended in an explosion. Gas mixed with drilling mud, sand and water rushed upwards. In conditions of severe frost, the blowout froze, and an ice crater 30 meters wide and 20 meters high was formed at the drilling site. The eruption lasted about a month until the hole plugged itself.

The drilling of the second borehole resulted in an explosion of double force – the gas from both boreholes combined through the underground voids.

An interesting fact: the gas and ice fountain at Vankor was active for 1.5 years, until they found a way to eliminate the accident.

After numerous exploratory, geological, and installation works, Rosneft launched the Vankor field into commercial production in the second half of 2009 with the participation of Vladimir Putin. From the developments there is a local pipeline Vankor-Purpe 500 km long, which connects with the trunk pipeline Transneft. The estimated total volume of oil production at Vankor is 500 million tons.

With the increase of Vankor oil and gas production capacity, the shift camp also developed, the number of workers increased up to 3000 people in summer period.

At present, the construction of various objects continues. New production units, dwelling and administrative buildings are erected, wells are drilled and oil pipelines are laid.

There are three residential compounds with the total capacity of 2500 people in the territory of the Vankorskoye oil field’s settlement:

Meals for field workers are arranged in the own canteen. In addition, there are medical and dental offices, and an emergency helicopter is on duty. Satellite TV, internet and mobile communication is available at Krasnoyarsk Krai rates.

READ
Which country is it and does it need a visa?

Groceries, basic necessities and medicines are regularly airlifted from Igarka.

Interesting fact: Alcohol is strictly prohibited at Vankor. If an employee is found in violation of this law he or she will be fined a large sum and dismissed.

Population of the village

The village has 30 years of history, but there are no natives and families with children at Vankor. The population consists of shift workers, business travelers, contractors, management and maintenance personnel.

Men from all over Russia and neighboring countries come to the Vankor field to work on a rotational basis. The number of women is not more than 10-15% of the total number of workers. The most popular professions:

When planning a trip beyond the Arctic Circle, Krasnoyarsk Krai takes into account the difficult climatic conditions. From May to December the roads are impassable for any kind of vehicle. At the same time, the abundance of water reservoirs and swamps create favorable conditions for the development of mosquitoes and other gnats. You should be prepared for severe frosts and thin air, traveling in winter months. The absolute temperature record is -63 degrees.

The means of communication between the Vankor field and the Big Land are helicopters (Mi-8, Mi-26) and trucks.

The vehicle fleet of Vankor is represented by three-axle cross-country vehicles “Ural”, “Kamaz”, “Zil” as well as large-size machines “Kirovets” and “Belaz”. There are all-wheel drive off-road vehicles of various modifications and tracked vehicles. There are no passenger cars because they are useless in the Far North.

The only concrete road of Vankor is laid from the residential complex to the airfield site. The rest of the transport routes are unpaved, some of them are accessible only in winter.

Interesting fact: There are no garages for vehicles on the territory of the field. In winter they do not turn off engines 24 hours a day, so as not to repair a stopped engine right in the freezing cold.

The closest places of interest to Vankor for a tourist trip are in the town of Igarka and its surroundings. Some of the most famous include:

READ
Fishing in Vietnam, how to fish and what to catch

When planning an expedition to the Far North in the region of the Vankor field it is very important to take into consideration the following points:

The Vankorskoye field is closed for tourists. However, the neighboring region will offer a lot of new impressions from visiting sights, and the banks of the Yenisei will offer a good catch for fishing connoisseurs.