The Vasco da Gama Bridge in Lisbon is one of the most impressive sights in the Portuguese capital and combines functionality with beauty and elegance. It has a six-lane highway with a capacity of up to 52,000 trucks and cars per day. Two more lanes are provided for the periods when the traffic load increases several times. The 17.2 kilometer long and 30 meter wide giant reinforced concrete structure is made up of a cable-stayed bridge, a viaduct and access roads. It was erected to reduce traffic on Lisbon’s first bridge, known as the April 25 Bridge.

The Vasco da Gama Bridge over the Tagus River in Lisbon connects the new Expo 98 district in the northeast part of the city with the south bank near the towns of Montijo and Alcuesti. The grandiose structure towers over the widest part of the Tagus downstream, resembling a sea bay. The opening, on March 29, 1998, was timed to coincide with the start of the Lisbon World Expo 98. It was organized in the Portuguese capital to commemorate the five hundredth anniversary of the discovery of the sea route from Europe to India by the great Portuguese navigator Vasco da Gama, whose name the bridge and tower in the new modern area of Expo 98 in Lisbon were named after.

Beneath the giant spans on the north side is a park with a picturesque green area, pedestrian and bicycle paths, recreation areas, areas for sports and active games. The water part of the estuary under the viaduct is an extensive protected area with rich aquatic fauna and flora. The wetlands are visible from above, where several tens of thousands of species of migrating birds such as ducks, geese, and flamingos overwinter. 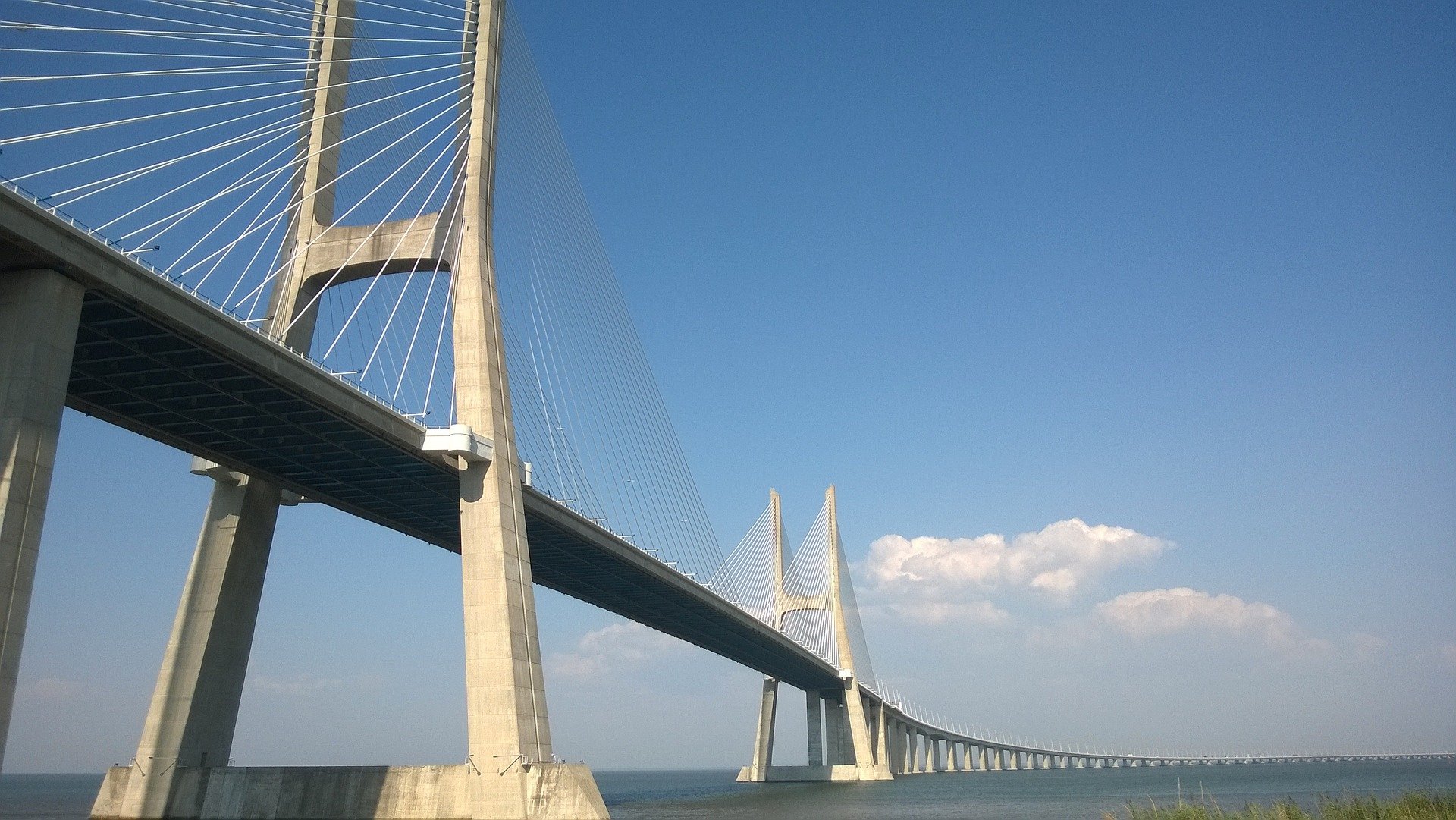 The need to build a new traffic artery across the Tijo River in Lisbon was felt in the early 90s, when traffic jams turned into a traffic collapse, paralyzing city life for many hours. In 1994, in order to relieve the bridge on April 25, a tender for the construction of a new bridge was opened. It was won by the international consortium Lusoponte. Preparatory work, including design, began in February 1995 and lasted about a year and a half. Approximately in the same period the construction was carried out.

The design considered a set of factors that could affect the performance, safety and longevity of the structure. These are the peculiarities of the bottom topography and the landscapes of the northern and southern banks of the Tagus. Climatic conditions in Portugal, including seismic activity. And also to the spherical shape of the planet, environmental and aesthetic aspects. The author of the project was a French engineer Michel Virloo. Who managed to take into account all the nuances of the construction of a grand building and fit it perfectly into the landscape, without disturbing the ecological balance of the environment. 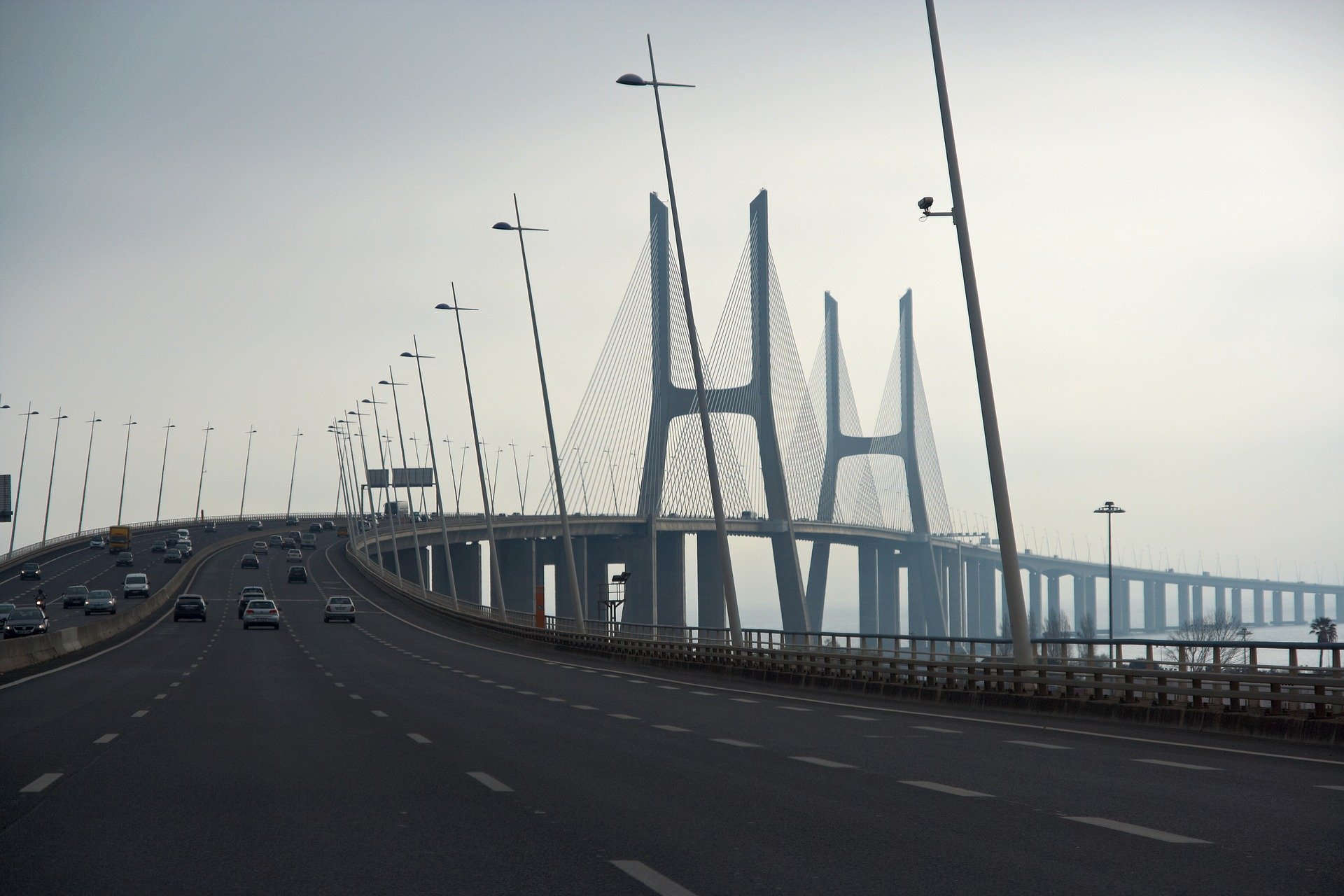 The project, which was divided into four parts, was carried out by different construction companies under the supervision of the Lusoponte Consortium. The large-scale construction, which involved more than 3,300 workers, was completed after 18 months. A grand opening ceremony was held followed by festivities and a large-scale banquet.

The construction consists of sections: 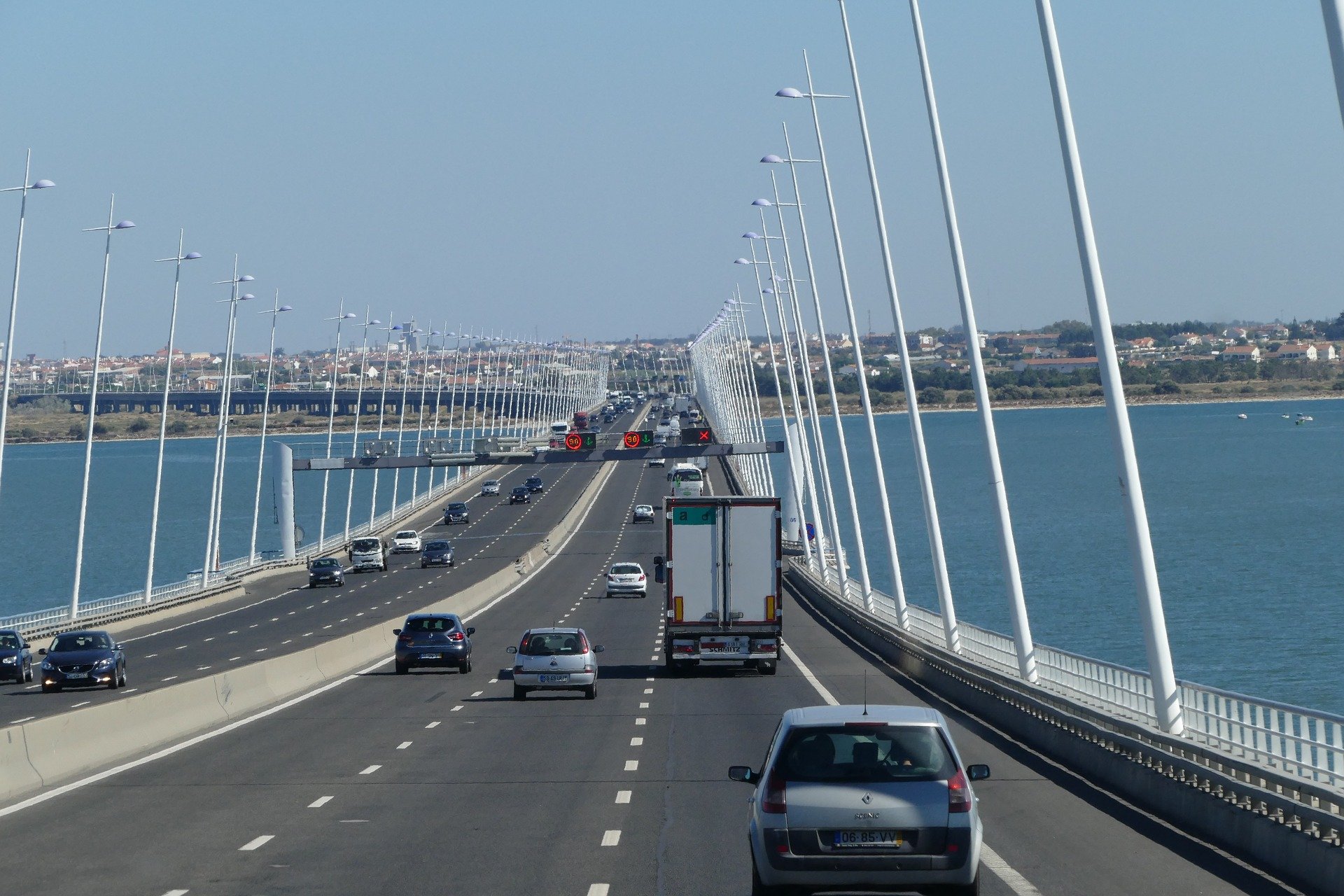 The structure is capable of withstanding wind gusts of up to 250 km/h. and ground shocks 4.5 times larger than previously known earthquakes.

All preparatory and construction work was funded by the Lusoponte consortium. Which ended up being $1.1 billion. No budget funds were raised. And the developer was given the right to charge tolls for 40 years on both bridges of Lisbon. Toll is made only in the direction of Lisbon, in the opposite direction the passage is free. Depending on the size of the car toll ranges from 2.70-6 euros for cars. Up to 11.70 euros for trucks.

What is interesting about the bridge for tourists 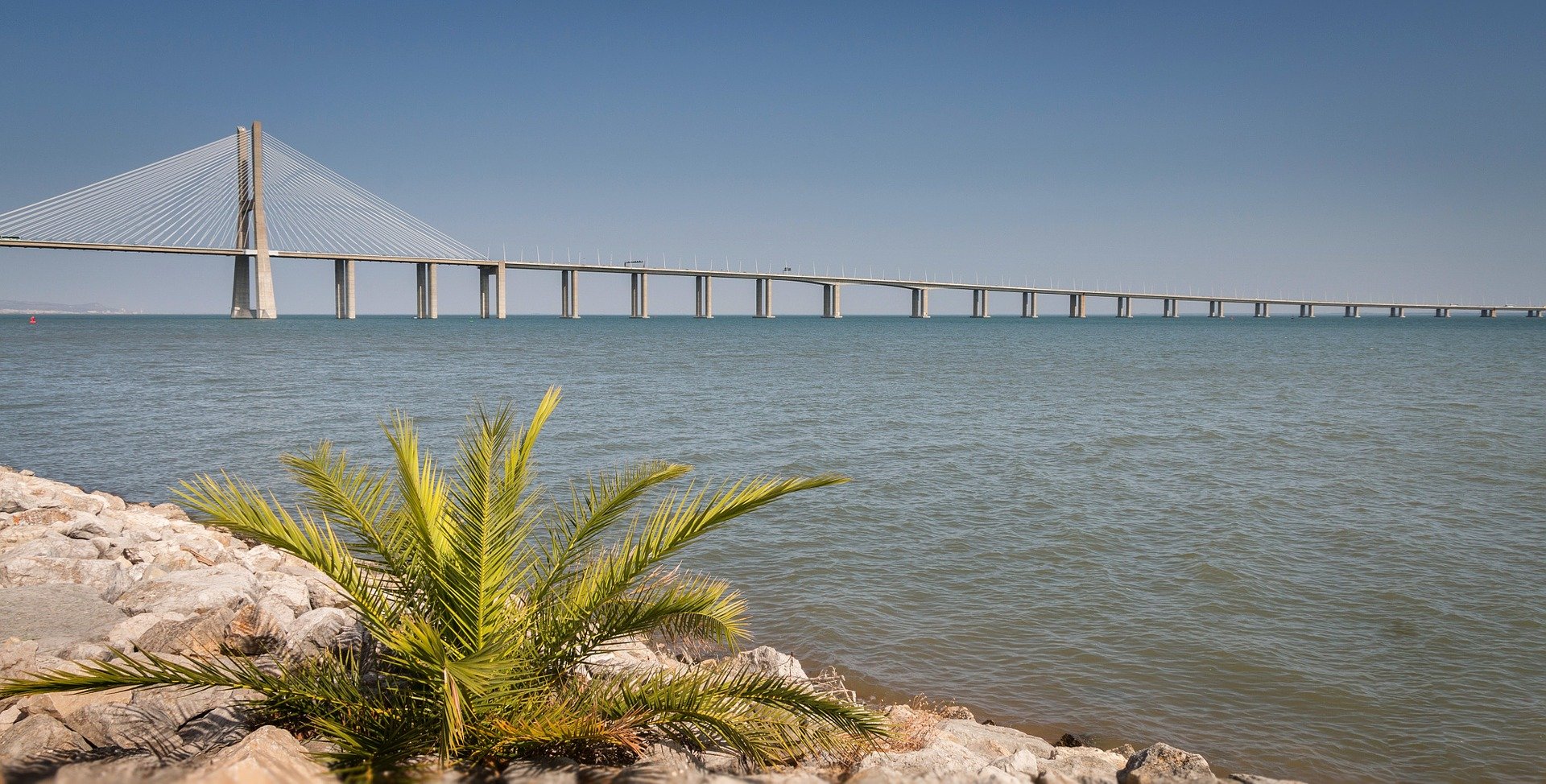 A holiday in Lisbon is worth devoting a few hours or even a day to a marvel of engineering genius. See it in all its splendor from different angles. Driving along a perfectly smooth road, admiring the turquoise surface of the Tagus. Pass the green banks and the panorama of Portugal’s capital in the distance.

READ
The Triple Trinity Bridge in Crowland. Sightseeing in England

Vasco da Gama Bridge is one of the most important transport arteries of Lisbon. It is one of the largest and most significant constructions of the late twentieth century, unparalleled in any city in the world. The peculiar shape of the structure was created in order to maximize the preservation of the environment and maintain the ecological balance. Its part is perpendicular to the coast, while the opposite lies parallel to the shoreline. 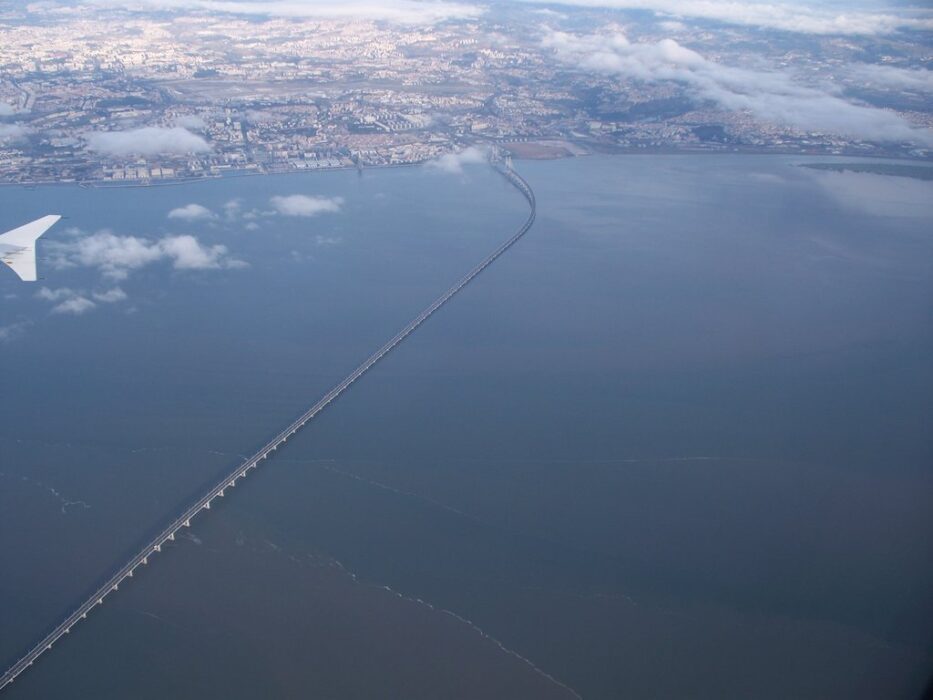 The opening of the bridge was timed to coincide with the 500th anniversary of Vasco da Gama’s discovery of the sea route from Europe to India. 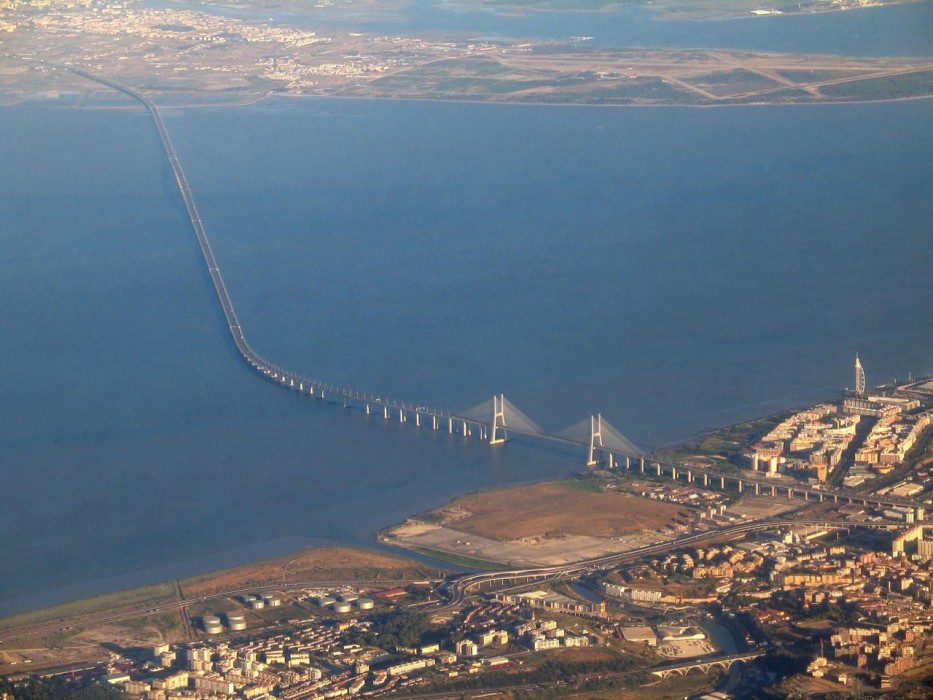 Designing of the bridge began in 1995. The cost (design and construction) was 897 million euros or almost 1.1 billion dollars. Of course, the Vasco da Gama Bridge can not compete in length with Chinese bridges, such as the Danyang Kushan viaduct, but still the bridge is so huge that when designing had to take into account the circularity of the earth (if not taking into account the circularity – the difference in height at the different ends of the bridge would be 80 centimeters). The reinforced concrete supports of the bridge reach a height of 160 meters. The deepest piles under the bridge supports are 95 meters high. 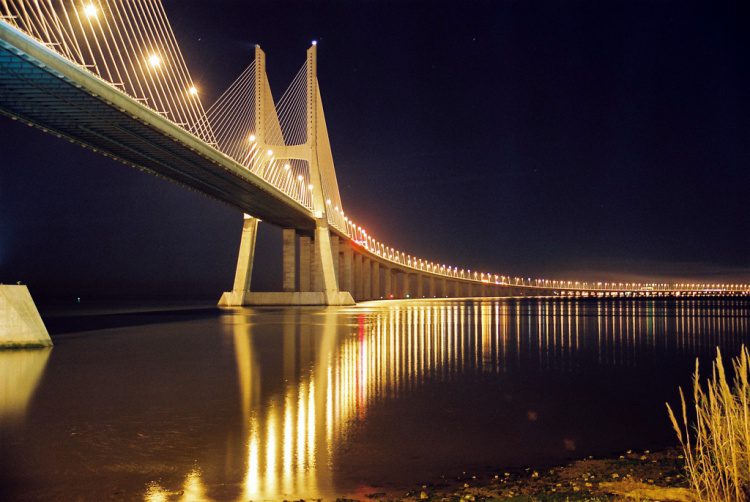 On the opening day of the bridge, along the entire length (17.2 kilometers) was laid out a festive table with refreshments. Everyone who came to the opening of the Vasco da Gama Bridge could sit at the table. 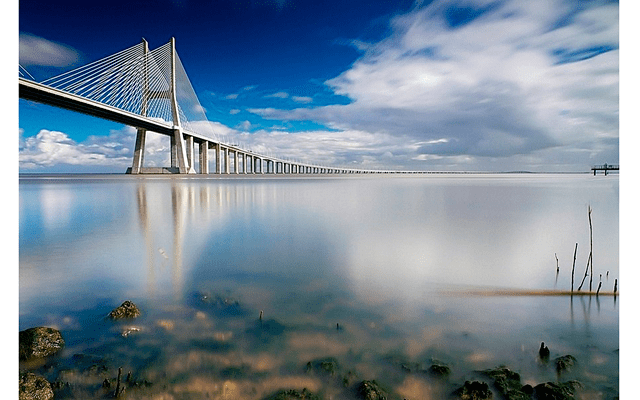 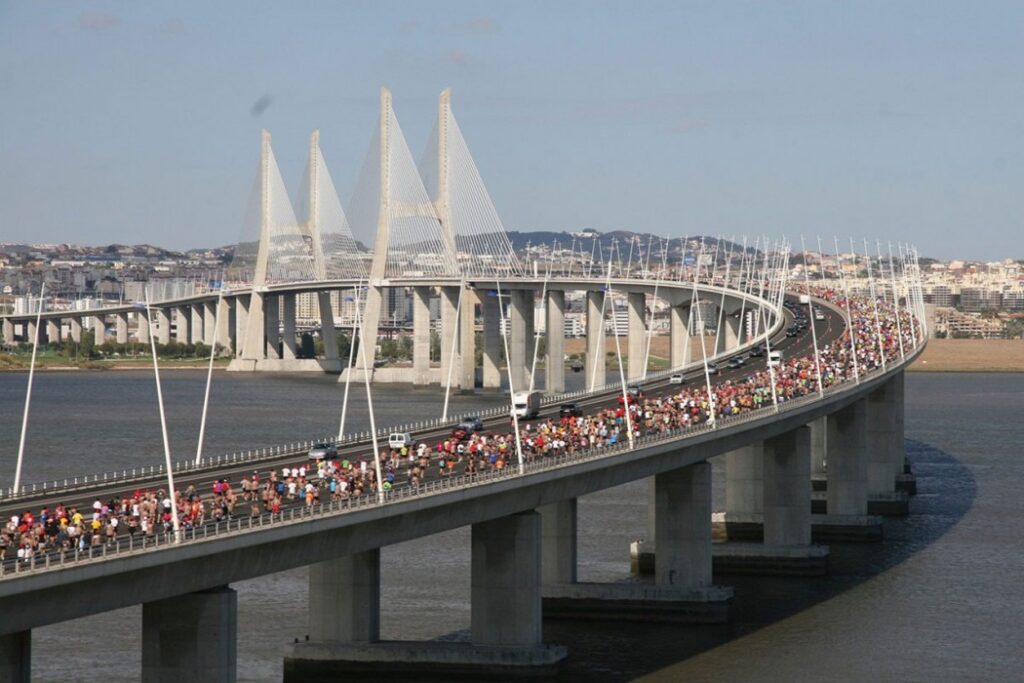 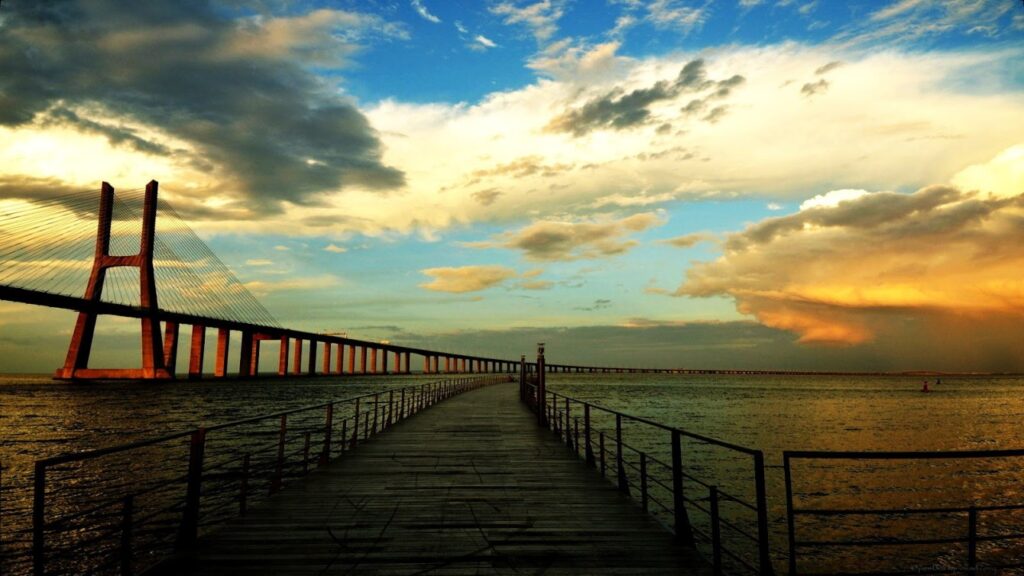 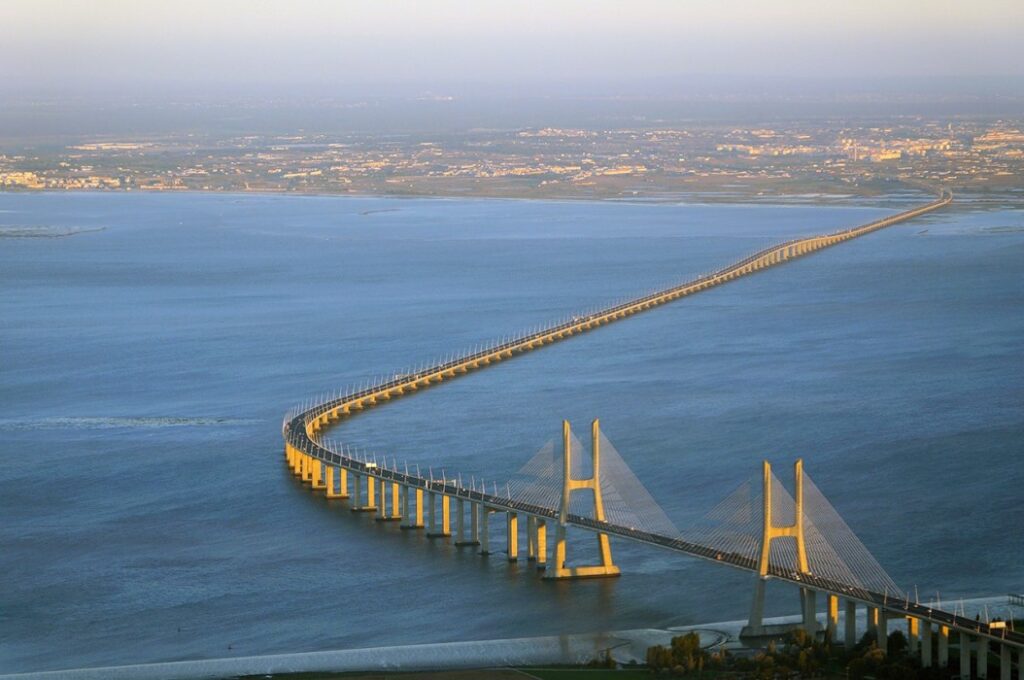