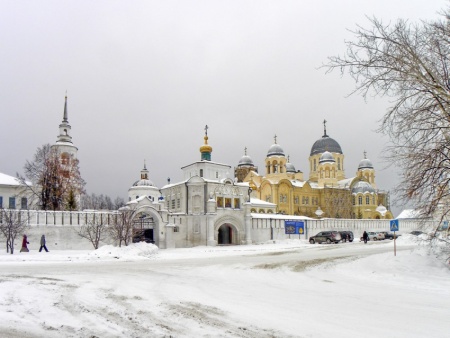 St. Nicholas Monastery is a monastery of the Russian Orthodox Church in the town of Verkhoturye, Sverdlovsk region. 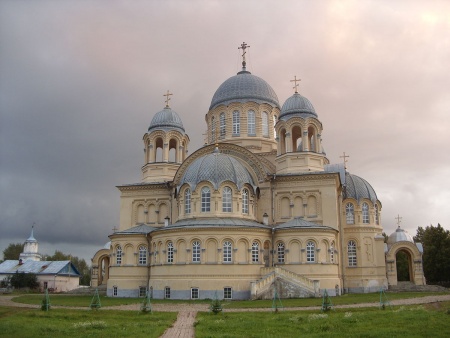 In St. Nicholas Monastery there are relics of Simeon of Verkhoturye, which attracted pilgrims to it both in the past and at the present time. The territory of the monastery is huge, much larger than the Moscow Kremlin. The monastery stands on a hill between the Kalachik and Sviyaga creeks, one of which also separates it from the Kremlin.

The main church of the monastery – St. Nicholas Church – did not survive those times, but the monastery still have three (all active), as well as the monastery fence with towers (second half of the XIX century). Entrance to the monastery (inside the fence) women are allowed only in a skirt and scarf.

Buildings of the monastery [ edit ] 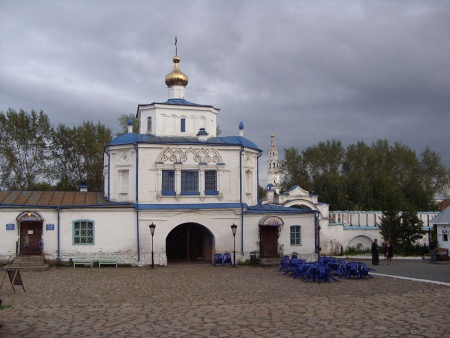 The eclectic Holy Cross Cathedral (1905-1913, arch. A. B. Turchhevich) is the third largest church in Russia, second only to the Cathedral of Christ the Savior in Moscow and St. Isaac’s Cathedral in St. Petersburg. At its opening in 1913 in honor of the celebration of the three hundredth anniversary of the House of Romanov expected Nicholas II, who, however, could not come. Inside the Cathedral there are three unique faience iconostases, which were destroyed during the Soviet regime, and were restored in 1998 to coincide with the 400th anniversary of Verkhoturye. In the cathedral rests the relics of St. Simeon of Verkhoturye. Built in the Russian-Byzantine style. The main temple in honor of the Exaltation of the Holy Cross was consecrated on September 11, 1913. Left side chapel in the name of St. Simeon Verkhoturye. The left chapel in the name of St. Simeon of Verkhotursk, consecrated May 27, 1914. Right side chapel in honour of the Assumption of the Blessed Virgin Mary, consecrated on September 10, 1916 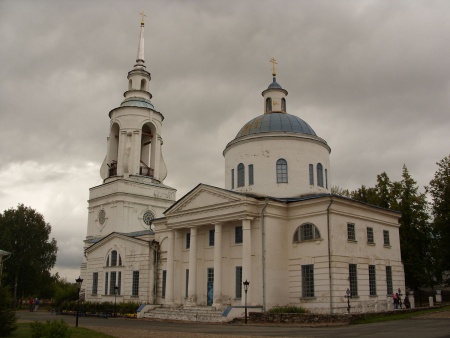 On the territory of St. Nicholas Monastery are also the Transfiguration Church (1821) in the style of classicism with a bell tower, destroyed in the 1930s and restored in 1998, and Simeon-Anna’s Gate Church (1856) in the traditions of ancient Russian architecture. Other monastery buildings survived, including the brotherhood building and the rectory, which houses the Orthodox museum.

House for the reception of honored guests [ edit ]

Outside the walls, on the shore of the Kalachik pond, there is a wooden house built in 1913 for the expected arrival of Emperor Nicholas II to receive guests of honor (presumably the architect V. Pokrovsky), resembling the ancient Russian terem. 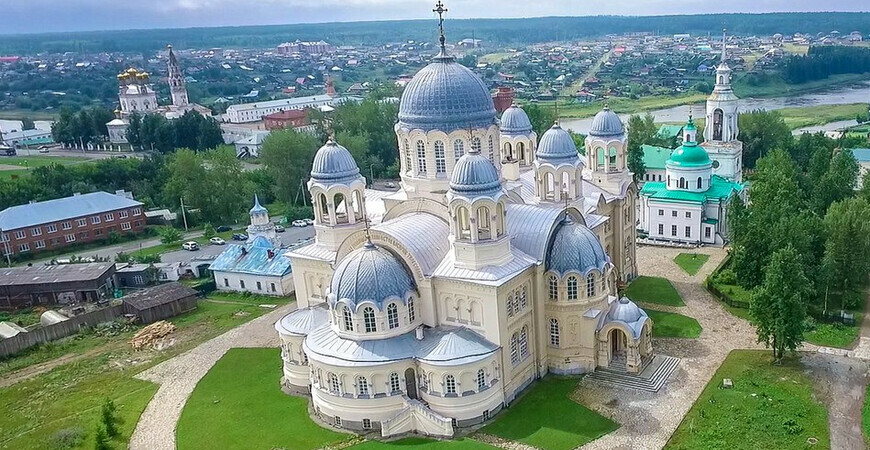 Verkhoturye has been a major spiritual center of the Urals and Siberia for centuries. Orthodox pilgrims come here from all over Russia, as before, to pray to the holy icons and relics. Every year the city is visited by an increasing number of tourists who travel to churches and monasteries on their own or as part of excursion groups.

Verkhotursky St. Nicholas Monastery is one of the most important religious and cultural sites of the city. As a rule all thematic excursions start from it. The schedule of daily divine services can be found on the official website of the monastery.

The Verkhoturye St. Nicholas Monastery is located on a hill at the confluence of two tributaries of the Tura River. It is a temple complex surrounded by a stone wall with the Cathedral of the Exaltation of the Cross in the center.

There is also the church of St. Nicholas the Wonderworker and Transfiguration Cathedral, and above the main gate is placed Simeon-Annensky Gate Church. In the walls of St. Nicholas monastery you can visit the museum, which tells about the life of the monks in the Urals.

Church of the Exaltation of the Cross

Holy Cross Cathedral was completed in 1913 for the celebration of the tercentenary of the Romanov dynasty. It is the third largest church after the Cathedral of Christ the Savior in Moscow and St. Isaac’s Cathedral in St. Petersburg. It is remarkable for its faience iconostasis, fully restored after a period of stagnation. Also inside are relics of Simeon of Verkhoturye.

Daily services are held in the Cathedral of the Transfiguration for parishioners and pilgrims from all over the country. It was built in 1836 with architecture that differs from the classic Russian-Byzantine style. On the grounds, it immediately stands out for its tall bell tower. In the cathedral you can worship the relics of St. Aref.

The Gateway Church of St. Simeon and St. Anne

The Gateway Church is a kind of entrance to the territory of the monastery. It was named in honor of the righteous Simeon and Anna the Prophetess. Erected in 1856, it is the first to greet parishioners with its mosaic icons. The small building is made in the traditional image for the Orthodox churches.

The church in honor of St. Nicholas the Wonderworker is the newest of all the churches in the St. Nicholas Monastery. The date of completion was in 1998. The construction was carried out on the site of the old stone church, which was completely destroyed during the Soviet regime. The walls of the building from the outside and inside have frescoes depicting the saint. The iconostasis of the temple has valuable Orthodox icons. The relics of St. Elijah are located there.

The Orthodox museum started its work in the Verkhoturye St. Nicholas Monastery in the 1990s. Its founder was hegumen Tikhon, who was actively interested and collected data about the history of the Orthodox Church in the Urals. Now the collection of the museum includes old documents, books, photographs, icons, household items, etc.

At the entrance it is necessary to make donations. From here you can order a tour of the entire monastery and visit the temples of the complex, as well as in the villages of Merkushino and Krasnaya Gora. A trip to the Aktai hermitage, where a spring with healing waters comes to the surface, is especially popular.

The year of the foundation of the monastery is considered to be 1604. Then monk Jonah went to Boris Godunov to obtain permission to build a wooden church in honor of St. Nicholas the Wonderworker. The royal family donated icons, necessary utensils, and books for church services.

Initially the place had the status of a monastery, but later it was called a monastery. Over the years, the area around it was ennobled, and in 1712 the first stone church was built on it. Like many other religious sites during the Soviet regime, St. Nicholas Monastery stopped its activities. The cathedral and church buildings fell into disrepair.

A colony for juvenile criminals was organized on this place. The revival period began in 1990. To the monastery were transferred the shrine of the church – the relics of the Righteous Simeon. The temples and outbuildings were restored and reconstructed. An Orthodox museum, a Sunday school, a college and a hotel for pilgrims were created. Today there are over 20 monks that are permanently staying in the monastery.

Verkhoturye is a small town located three hundred kilometers north of Yekaterinburg. Each year it is visited by thousands of pilgrims and tourists. This monastery is situated on the west outskirts of the city next to the Kremlin. To get to it is not too difficult. Verkhoturye has a train station and an intercity bus station. You can also get here by car in 2-4 hours.

The Verkhoturye railway station is a 10-minute drive from the St. Nicholas Monastery. Trains and electric trains from Nizhny Tagil, Yekaterinburg and Perm arrive here daily. Travel time is from 5 to 12 hours respectively.

Intercity buses to Verkhoturye depart from the Northern Railway Station in Yekaterinburg. You can get there from 900 rubles. The trip takes about five hours. Buses leave daily in the afternoon and evening. From Nizhny Tagil the way lasts about three hours.

The route from Yekaterinburg in three hundred kilometers runs along the Serovsky tract R352. Leaving the city, it is necessary to stick to the northern direction and move along the road signs “Verkhoturye”. Poklonny cross at the turn to the destination may serve as a landmark. In total, the trip takes about four hours.