The Tunnel of Vespasianus Titus is an interesting Roman engineering structure. It prevents flooding in a small town in the very south of modern Turkey.

Long before the Vespasian Titus Tunnel, in about 300 B.C. the Macedonian general Seleucus I Nicator founded the town of Seleucia Pieria on the southeastern coast of present-day Turkey.

The town is located north of the mouth of the Orontes River at the foot of the Amanus Mountains. Seleucus named it Pieria because it reminded him of the Macedonian region of the same name.

Soon Pieria became the main seaport in the Antioquia del Orontes region. It was also a strategic point for controlling the Syrian region. For this reason in 64 BC it was conquered by Pompey’s troops. Thus the city became part of the Roman Empire.

Why was the tunnel of Vespasian Titus built?

From time to time water came down from the Amanus Mountains to Pieria, passed through the center of the city and went into the sea near the port. At first this was not a problem, but after a few decades sediment carried by the river began to accumulate in the port. This necessitated regular cleanups and soil removal. The problem was exacerbated during thaw periods when the river rose, causing frequent flooding.

That is why in the first century AD, when Vespasian of the Flavius dynasty was emperor, it was decided to change the course of the river. To do this, it was necessary to divert the course so that it would circle the city instead of crossing it.

Design and construction of the tunnel

A dam and canal were designed, which passed through two man-made tunnels, reaching 875 meters in length. Remarkably, they were all excavated in the rock.

The work was long in progress. Vespasian himself did not wait for its completion. His son Titus was in charge after him. Finally, in the 2nd century, the tunnel was finished under Emperor Antoninus Pius.

An interesting fact is that the names of Vespasian and Titus are carved at the entrance to the first section of the tunnel, and another inscription at the unloading tunnel is Antoninus’ name. 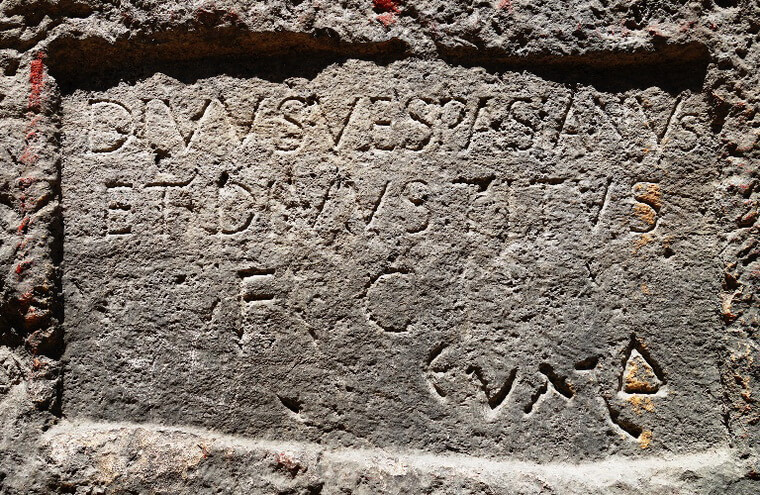 Here are the names of Vespasian and his son Titus

The stone dam was 16 meters high (today it is reduced to 4 meters due to accumulation of sediments), 5 meters wide and a total length of 175 meters. It is located at a height of just over 44 meters above sea level.

The dam ends with a shallow embankment 126 meters long upstream. Then there is an approach canal 55 meters long leading to the first section of the tunnel. It is rectangular in shape and cut out of limestone. 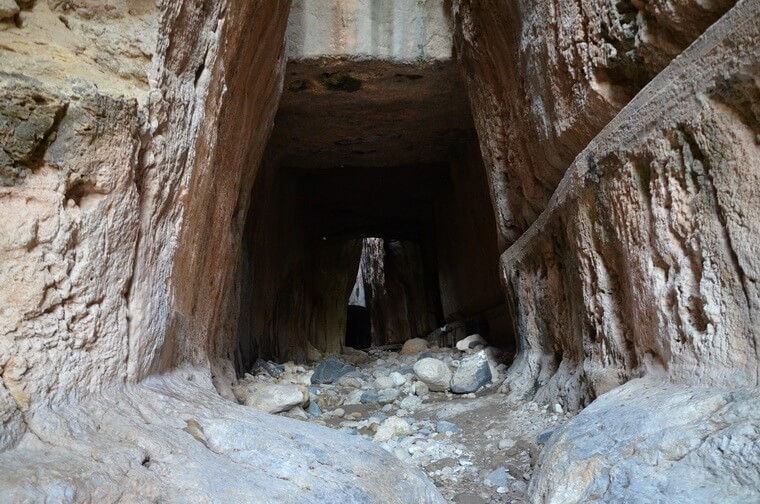 The first part of the tunnel has a dome shape. It is 5.8 meters high at the entrance, 6.3 meters wide and 90 meters long. Three meters after the entrance the cross-section of the tunnel acquires almost rectangular shape – 6.9 meters in width and 6.5 meters in height at the exit. 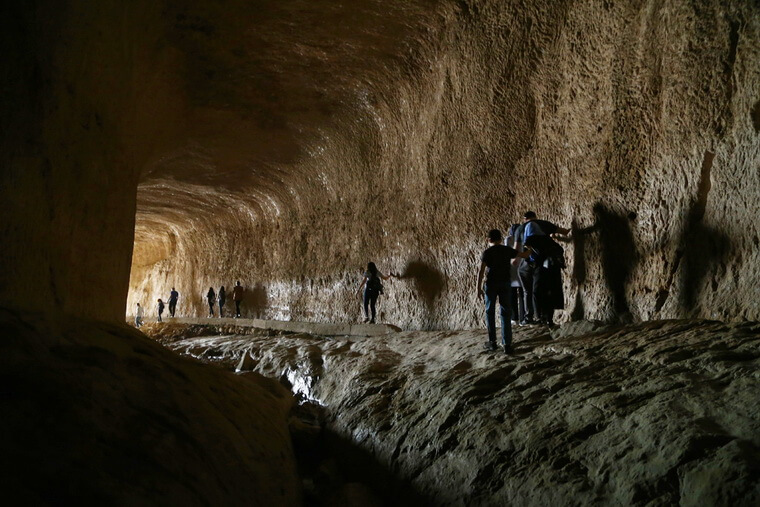 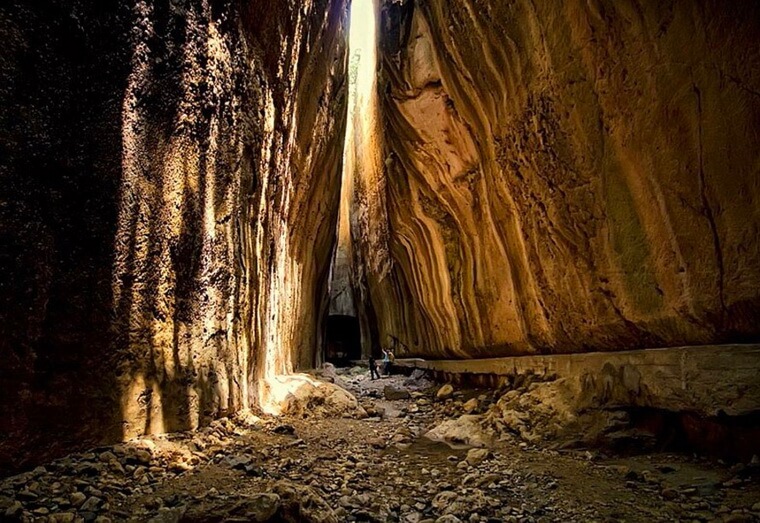 Note, on the right, the channel for the spring water is cut out

At the exit of the second section of the tunnel there is an aqueduct crossing the drainage canal. The length of this canal is 635 meters. 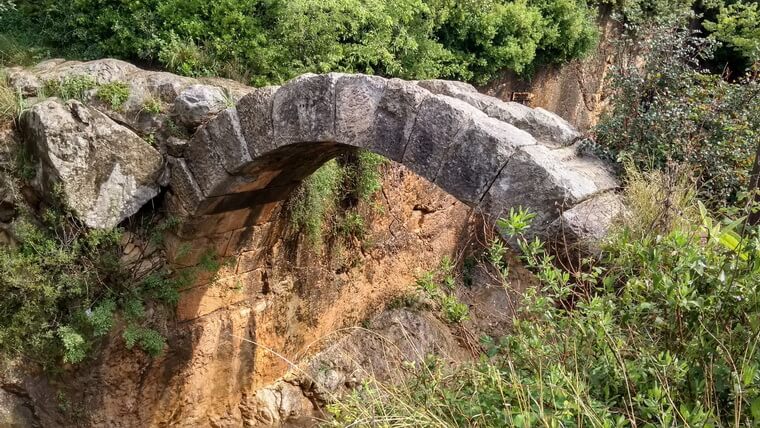 The bridge over the canal has survived to this day

The calculated capacity of the system is about 70 cubic meters of water per second, while the tunnels have 150 cubic meters per second. The entire system was built solely with human power to protect the city from flooding and prevent siltation of the port, while meeting the city’s water needs.

The Vespasian Titus Tunnel was built with the help of legionaries and Jewish prisoners captured by Titus during the capture of Jerusalem in 70 AD.

According to UNESCO, it is one of the best examples of Roman engineering and one of the unique structures of the Roman world to solve urban problems. And the tunnel has survived to this day virtually intact. 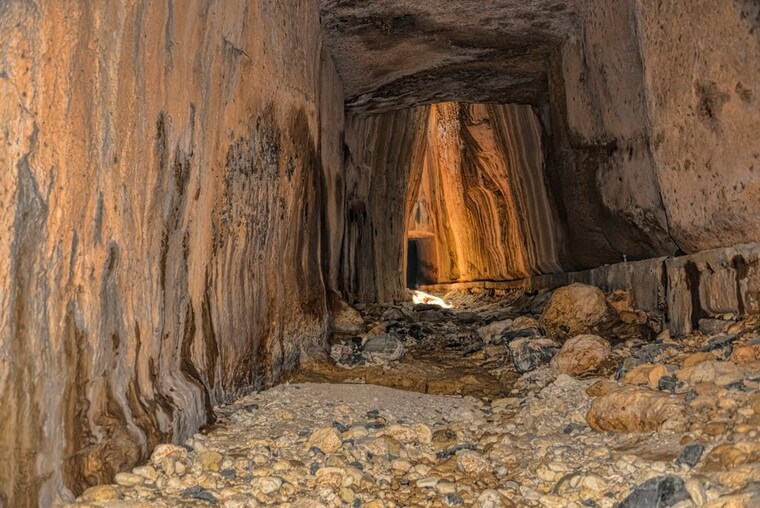 Today you can visit it at the foot of the Nur mountains, near the modern town of Shevlik, about 35 km south-west of Antakya (ancient Antioch).

In spite of the system of diversion and all the efforts made over the decades, by the 5th century the port was badly polluted and the city was in decline, losing its importance. It was conquered by the Sassanids in 540 AD and finally abandoned shortly thereafter.

As for the system of tunnels and canals, the French archaeologist Victor Chapot, who visited them in the early 20th century, discovered that where the canal bends sharply to the west, it was breached. According to him, this hole was not of natural origin. The archaeologist believes that the hole was made intentionally during the Arab invasion. It is through this hole that much of the debris still escapes to this day.

The hand-made gorge: the tunnel of Titus Vespasianus (and the Moses tree as well)

During the reigns of the Roman emperors Vespasian the father and Vespasian the son (the first was Titus Flavius Vespasian, the second was also Titus Flavius Vespasian. Only they, almost like Karl Marx and Friedrich Engels – four completely different people ) in the second half of the 1st century AD, a gorge was carved in the rock leading from the sea to the city. Water ran along its bottom. This tunnel served to supply the city with water and divert water because Seleucia often suffered from floods. It was cut into the rock by Jewish prisoners of war – Titus Vespasian the son of Vespasian conquered Jerusalem in AD 70, razed the city to the ground and brought thousands of prisoners from there.

There is no charge to visit the tunnel. Follow the brown signpost (all historical sites in Turkey are marked in this color). A narrow green path leads to the hand gorge and amateur botanists can also explore the flora of the area.

The villagers of Cevlik do business by offering weary travelers gözleme (thin flatbread with a filling) and bread from the oven, selling pepper and tomato paste, pomegranate sauce and laurel soap.

At the entrance to the tunnel you’ll see a bridge like this – how does it only hold up? Pull out the middle stone, the whole thing falls apart.

The tunnel is about 7 meters high! Water flows in it to this day – but now along the narrow walls along the walls, and on the bottom of man-made gorge walk curious tourists.

If you climb a little higher from the creation of slaves Vespasian father and Vespasian son (there are trampled roads), you will get to the ancient tombs Beşikli (Beşikli Mağara). They, too, belong to the period of Roman Imeria, and are believed to belong to the families of the rulers of Seleucia Pieria. In general, there are rock tombs and caves of all kinds scattered all over the place – if you wish, you can explore them on your own.

At this point, my “take what you see” function failed. I hope you’ll understand me: we saw what we could fit into three materials (Antakya Historical and Gastronomic and this one) in one day, and we had been on the road all night before. So in the evening to take pictures … how to say … did not want to.

And then we will go to the Moses Mountain, or – Musa Dağı (Musa Dağı). On the way we pass Vakıflı (Vakıflı), the only Armenian village in Turkey. It is the only village in the region that is clean, neat, with well-built houses and well-tended gardens. The difference is like the Russia-Finland border (Petersburgers will understand me). All the Turkish villages in Hatay are not to the praise of the locals – dirty, neglected. I never cease to be amazed at Turks who can lick their house with manic thoroughness (with a toothbrush the back legs of the far cupboard in the pantry, yes!), but how dirty the streets are, especially in the villages. Nothing human pleases the eye, only nature. So it was this village with the Armenian population gave a serious repulse to the Turks during the famous events of the early 20th century.

The last destination is the village Hıdırbey (Hıdırbey köyü) where the famous tree of holy Musa (Hazret Musa) – Moses is located. According to a popular rumor, this plane tree is over three thousand years old and almost 20 meters high. Legend has it that the righteous Musa came to the village, sat down at the spring (it flows to this day), drank some water and left, forgetting his staff. When he came back for the staff, he saw that it had sprouted. The staff is the sycamore tree that we see today.