The Island of Vidøya and John Lennon’s Tower of Light

Videy is the largest island in Kollafjordur Bay near Reykjavik, the capital city of Iceland. In fact, it is two islands separated by a small strip of land. They are called East and West, although if you look at the map, it would be more logical to call them Southeast and Northwest. 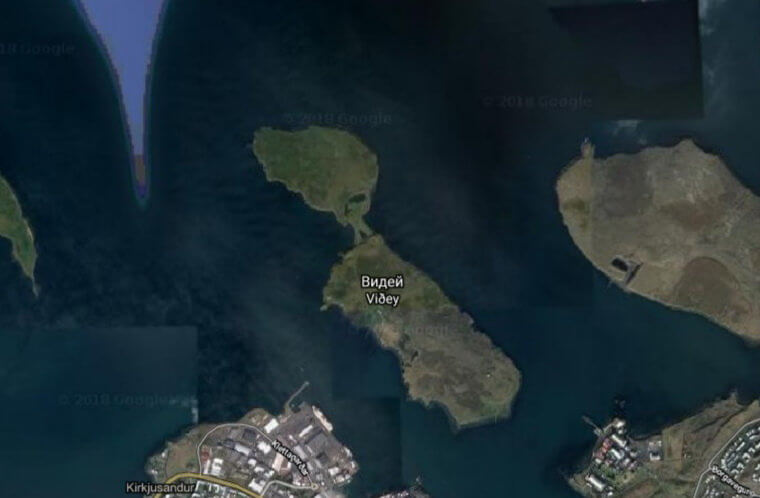 Where is Videi Island

Videy lies just 700 meters from Reykjavík in the western part of Iceland.

The classic charm of Iceland is embodied in this island. It is a quiet, peaceful and secluded place on the planet. The size of the island is about 2.8 kilometers long and just over 600 meters wide. The area of the island is only 1.7 km 2 . The highest point is 32 meters above sea level.

Recall: the island consists of two parts. The East Island is separated from the West Island by a narrow isthmus. The Eastern Island is approximately 2 times larger than the Western Island. 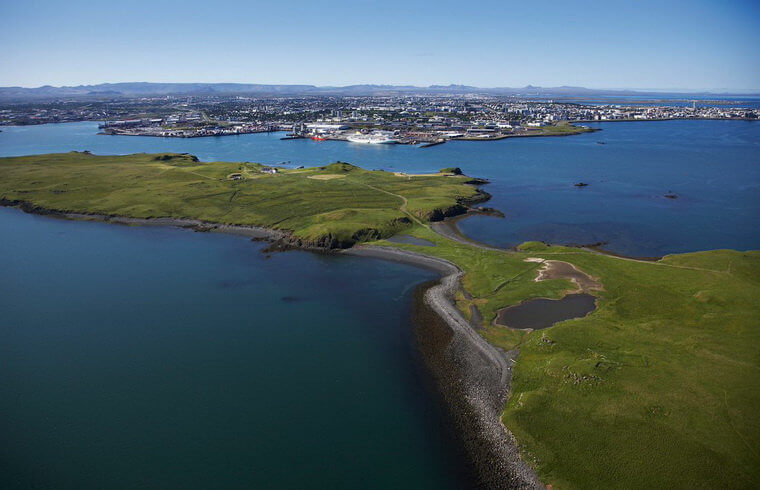 The isthmus connecting the islands of Videi

There are about 30 species of birds and at least 156 varieties of plants on Videy Island. So this is not Gansa Island, where there is practically nothing, but the two countries have been “fighting” for it for more than half a century.

The beaches here are calm and serene, and you can often see seals on the coast. And don’t forget the stunning views of the surrounding nature. 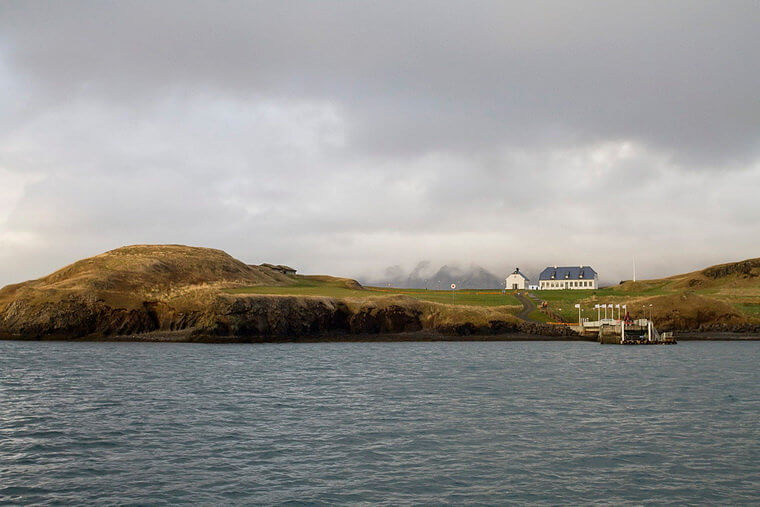 View of the island from the sea

In addition, there are ancient artifacts on Videy Island.

There are archaeological sites on the island dating back to the early 10th century. From 1225 to 1539 on the island operated Augustinian monastery. There is a small abandoned village, as the last inhabitants left these places in 1943.

Historians claim that Skuli Magnusson, the founding father of Reykjavik himself, built his house and church here in the 12th century. It is called the House of Videyjarstofa. It was built in 1753-1755 by the Danish government. The house was designed by the Danish architect Nikolai Eigtved. 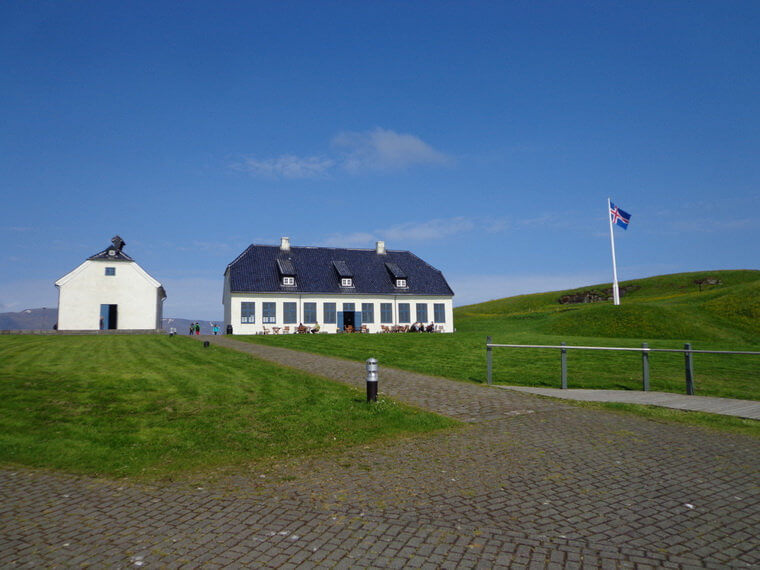 It is noteworthy that this house is the oldest house in Reykjavik, and the oldest stone house in all of Iceland. The house currently houses a restaurant. Two hiking trails start from it, and in the summer there is a horse rental and riding school nearby. The restaurant is often rented for weddings, celebrations and parties.

In addition to historic landmarks, Videy is famous for the interesting “tower of light” known as the Imagine Peace Tower. It is located in the northwestern part of the East Island.

This modern landmark comes courtesy of Yoko Ono, the widow of “Beatle” John Lennon. According to her idea, “The Tower symbolizes the light emitted by people who understand the phrase ‘Imagine Peace’ well. It can be translated as “Imagine Peace.” 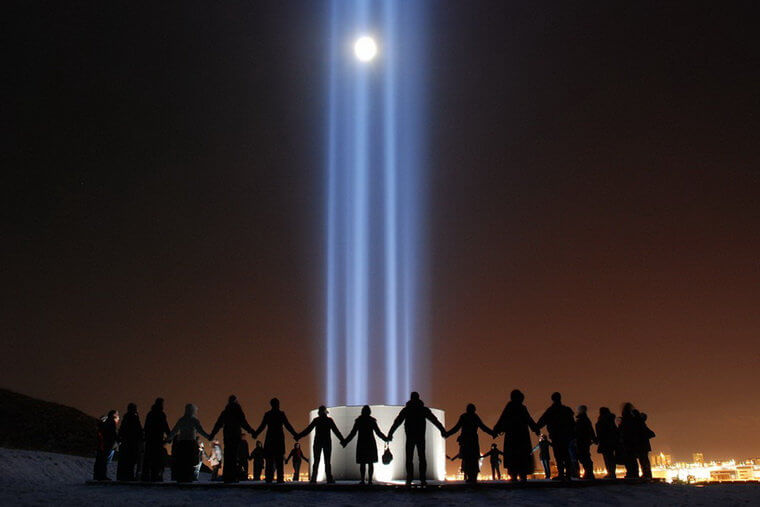 These are the words written on the commemorative plaque in 24 languages, including Russian. This is an extraordinary tribute to Lennon and his unforgettable composition “Imagine.

It is noteworthy that construction of the light tower began on Lennon’s birthday, October 9, 2006, and was completed on October 9, 2007, also his birthday. He would have been 67 years old at the time. An additional plaque reads, “I dedicate this Tower of Light to John Lennon. My love for you forever. Yoko Ono.”

But the tower is not lit all the time. They turn it on between October 9 and December 8 (the dates of Lennon’s birth and death, respectively) and some other days, but not around the clock, but about an hour after sundown. They turn it off at dawn. 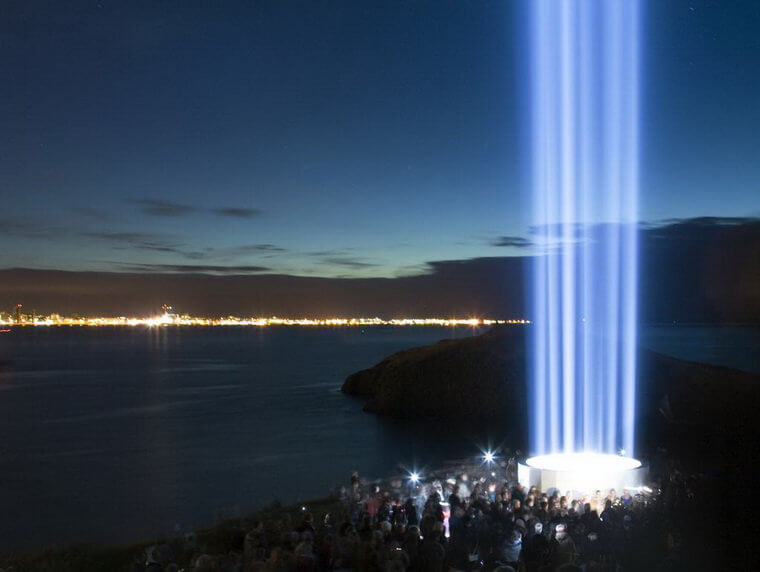 Technical features of the tower

The tower consists of 15 projectors with prisms, which act as mirrors, reflecting a column of light vertically in the sky from the so-called “wishing well”. 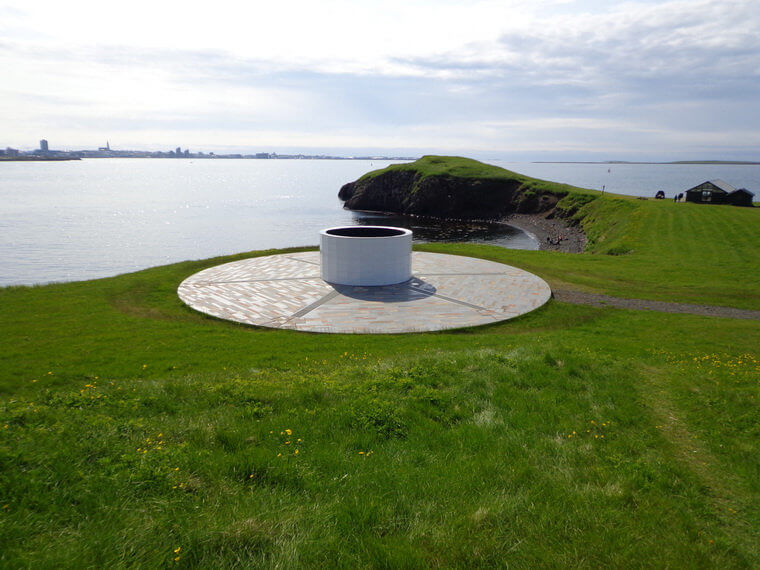 This is what the light tower looks like during the day

The power of the light is so great that the light column usually reaches the clouds, and on a clear night its height exceeds 4 kilometers. 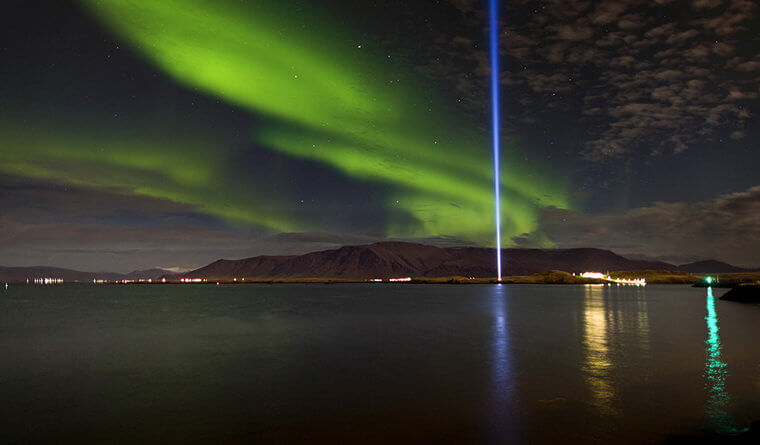 Imagine Peace Tower of Light. It is also called the “Peace Tower”.

Functionality of the light tower is provided by a unique geothermal power plant in Iceland. The tower consumes approximately 75 kW of power. Iceland was chosen for the project because of its beauty and ecological use of geothermal energy.

Opening of the tower

The installation of the column of light was a joint project of Yoko Ono, the Reykjavik administration, the Art Museum of the capital and the local power company.

The grand opening was broadcast by many TV channels. Yoko and her son, Beatles bandmate Ringo Starr and the widow of another Beatle, George Harrison, were at the ceremony. The fourth band member, Paul McCartney, was also invited, but was unable to appear due to legal proceedings.

Yoko admitted that the tower (sometimes called the peace tower) was the best thing she and John ever did. 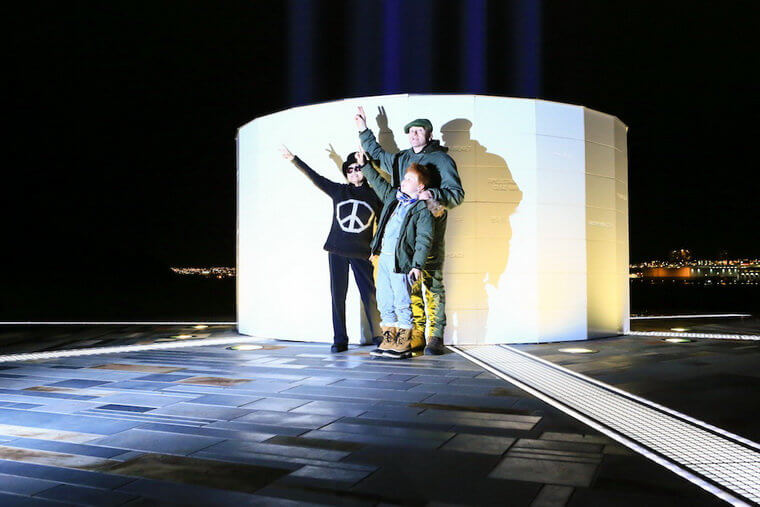 On the left, with the peace paw on her clothes, Yoko Ono

Usually, visitors get to the island by ferry. In the summer, ferries depart daily from Skarfabakki and Harpa piers. In winter, the ferry runs from Skarfabakki only on weekends. Notably, the Reykjavik City Card (which is the equivalent of a single ticket that includes free transport, museums, zoos, geothermal springs and many other benefits) provides free ferry travel as well.

Biking, and regular hiking, are mostly popular on Videy Island.

“A day in the life”: most of the song was written by John Lennon, except for the sudden wake-up call from Paul McCarthy in the middle. Putting the two pieces together was probably not easy: How do I describe a day in my own life.

READ
Lake Geneva is the largest lake in the Alps.

Here’s one such day: December 8, 1980. The day John Lennon died. When Lennon was killed, he was forty. I was fourteen. I came home after some extracurricular fornication and fell asleep on the couch. My classmates called to tell me the good news: school had been canceled in the name of a flu epidemic. Turning on the receiver, I learned the tragic news: John Lennon had been murdered in New York City. This was followed by another pleasant thing: the world’s airwaves, including the national airwaves, which were not usually more rhythmic than Kobzon’s, burst into a blaze of iridescent Beatle harmonies, like the Northern Lights in Iceland.

Here’s another day: December 8, 2016. I’m working in Iceland. Hurrying to Reykjavik from Glacier Lagoon to catch the last steamer to Videy Island. The Imagine Peace Tower (Imagine Peace) shines on the island.

The tower consists of fifteen heavy-duty spotlights that cast a fat beam of light into the blackness of the Icelandic autumn. It was installed to commemorate the sixty-seventh anniversary of John Lennon’s birth. It lights up on October 9 each year and goes out after December 8, the day John died. In autumn you can see the powerful rays of light from the Tower pierce the clouds, of which the Reykjavik night usually has no shortage. On a rare cloudless night, the light of the “John Lennon rays” pierces the immensity of the cosmic distances. Rumor has it that at this time of year they are accompanied by the northern lights. The monument is named after the hymn “Imagine,” written by John. The words “Imagine Peace” in twenty-four languages are embedded in the plinth of the spotlights.

Finding the group of tourists sailing to the Tower in the polar darkness of the old port was not easy. Frozen, they huddled together on the ship’s far deck for whale watching. Shortly before the tour began, a short guide with a quiet voice appeared and led us to another berth. His name was Guillom (from the Icelandic “Hjálmur,” meaning “helmet”). His name and the accents on the last syllables gave him away to be French. Guillom invited us to the boat, with an American captain at the helm, like Guillom, who had come to Iceland in search of a better life. We raced to the island of Videi.

Guillom led us to the Tower of Light, under which we took long pictures. He pointed to a murky glow behind the clouds that may (or may not) have been the northern lights. A Russian-speaking lady from London hovered over the Tower of Peace as if it were the Wailing Wall. I leaned against it too (the Tower, not the lady), but neither resonated in tune with my peace-loving aspirations. Either I was a lousy energy drinker, or the wall was too white and tiled: like a punk rock museum inside a public toilet in the heart of Reykjavik.

I realized that the monument Yoko Ono had conceived lacked anything of what the world valued John for: music. There is nothing new in the very “messiah” of the world at large. It is the form in which Lennon puts his peace message that is appealing. My female tourists pulled out their iPhones and portable speakers to play something Beatlesque, but the city’s technology instantly ran out of power in the Icelandic cold. Aside from the music, what was wanted was warm and torchy – live fire, because the Tower’s blue spotlight was really “yanking.”

After merging with the high-tech Tower, powered by geothermal electricity from the blazing heat of Iceland’s womb, Guillom took us to the lodge. There he and an American friend got us drunk on cocoa. We recorded messages of peace on tags and pinned them to a peace tree.

A bearded American retiree of the first Beatleman convocation coyly recounted how his grandchildren reacted to his intention to travel to Iceland to graze John Lennon’s Peace Tower: “Grandpa, why Iceland? There’s a whole country with monuments to LENNON on every corner – Russia!”

In the heads of the generation raised with iPhones, Lenin is mixed up with Lennon, Che Guevara with Cheboksary. Information technology does not create anything new, it only opens up the possibility of endlessly replicating the old (do not forget to repost this article). We huddle in the dullest world of second-rate banalities, triumphantly marching from gadget to gadget. For some, all idols without exception are overthrown, which, you’ll agree, is in tune with John. Others mold sinister pokemonies of Lenin and Nikolai with a hickey.

BashMira seemed too virtual to me: more for selfies than my heart. On the way back Gullom took us to Viðeyjarkirkja church, built in 1774. For Iceland, it’s a grayish antiquity. In the chancel is a triquetra, the Celtic symbol for infinity, replicated in Galicia. It seems the Icelanders wanted to emphasize the commonality of Scandinavian and Celtic roots.

“Be a Piper to the End”: a Galician bagpiper at the end of the world

The line winds endlessly around itself, forming three fish-like squiggles: past, present, future. Earth, ocean, sky. Eternity. “Words are flowing out like endless rain into a paper cup. They slither while they pass, they slip away across the universe,” it purred in my head. Because the Beatles are all of Irish descent. Or because the Peace Song is stronger than the Peace Tower. John had never been to Iceland. Unless in a transcendent, mindless way – across the universe.