Museum of U.S. war crimes in Vietnam. What’s on display

“The Museum of U.S. War Crimes and Puppets in Vietnam is now called more politically correct, the War Traces Museum. It is located in the center of the largest Vietnamese city, Ho Chi Minh City, which was the capital of South Vietnam during the war.

This is the part of the country that was supported by the United States and where, in fact, was based the collaborationist government, now called the puppet government.

The multi-story museum building belonged to the U.S. news agency during the war. Perhaps that’s why after the war it was chosen as a place for disseminating information of a different nature.

What can you see here?

The outdoor portion of the museum’s exhibits is U.S. military equipment. There are helicopters, fighter jets, and tanks and boats. There’s even a D7E army bulldozer. These 40-ton machines were used by the army to turn jungles and rice paddies into wastelands. A total of 1,417 such “builders” were used in the country by the Americans.

Most of the museum’s displays are photographs. Now on the first floor is an exhibition of images of protests in the U.S. and elsewhere, which tells the stories of hippies and just people who cared enough to actively oppose the war itself and U.S. involvement in it.

There are many shots of protesters in the protest hall and, in fact, that’s where the photos end, which will pass censorship and not damage the psyche of the unprepared viewer.

On the second floor is a huge exposition called “War Crimes” – and here begins the really gruesome war footage.

American mines and the famous “Napalm Girl” photo in Vietnam

The stories of these shots are presented in their original form. First you see a picture of some elderly American politician, a couple of pictures from Congress or from some political convention. And then you are shown locations and stories of crimes committed in Vietnam at the behest of these same people.

There is more than one such story here, and the room is very heavy indeed, and the pictures show the horrors of war all too blatantly. You can’t come here with children.

Several exhibits are devoted to weapons used by the U.S. Army.

The text on one of the stands reads, “During the war Vietnam was a real testing ground for all possible kinds of US weapons, both legal and illegal.

There are a huge number of mines, grenades and bombs on display.

A separate room with orange walls is dedicated to the effects of Agent Orange! The same one that was used to flood jungles and rice paddies from airplanes.

According to the information on the museum, U.S. pilots flew 19,905 missions, spraying 80 million liters of toxins over a total area of 3 million hectares. About 80 percent of the areas were treated twice, and 11 percent were flooded with chemicals more than 10 times !

The substance was so dangerous that even U.S. soldiers who worked with it later developed cancer and other diseases. And the mutations that occurred to people who were directly exposed to it are scary to say the least.

But the pictures and drawings speak very well about it. drawings of children.

Children’s drawings on the subject of “the consequences of war”.

Mutations caused by Agent Orange, which according to the official version was used solely to affect trees and cause leaves to fall, are evident even in the third generation.

The top floor of the building is occupied by an equally powerful exhibit dedicated to war correspondents who risked their lives and died to tell the truth. 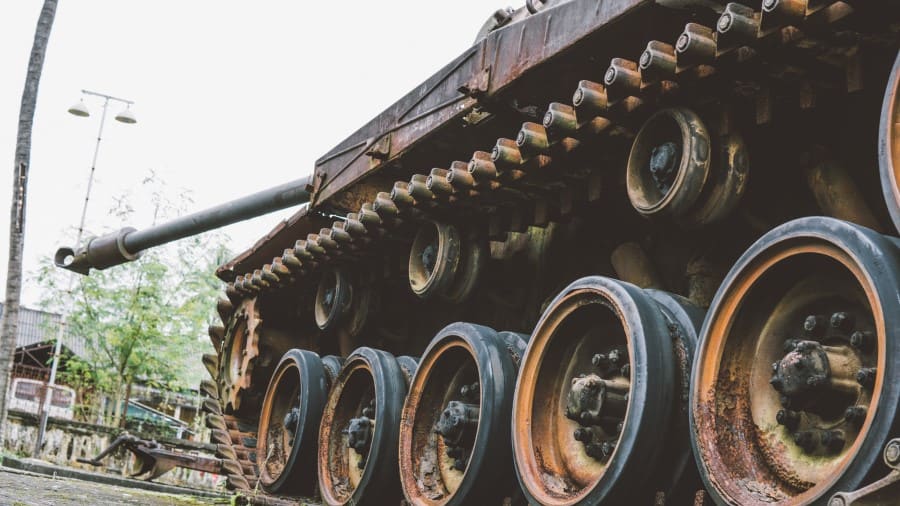 One of the most frightening, yet important museums in the history of mankind is the Vietnam War Museum, or more specifically, the Vietnam War Victims Museum. Located in Ho Chi Minh City (formerly Saigon), it is the largest war memorial dedicated to the Vietnam War and especially to the participation of the United States.

For the Vietnamese themselves the museum has great historical and cultural value, and the inhabitants of other countries are quite frequent guests here: people from all over the world come to Ho Chi Minh City to see with their own eyes the horrors of war, photographs of those terrible years, military equipment, weapons, ammunition and trophies. A total of about 500,000 people visit the Ho Chi Minh City War Martyrs’ Museum each year.

Initially founded in 1959, the museum was a small exhibit and showed the life of the Vietnamese army: photographs, various weapons, ammunition, army and military life. This was the case until 1965, when the invasion of Vietnam by U.S. Army soldiers began. During all the years of the Vietnam War the museum premises housed the information headquarters of the Americans.

The war lasted 10 years – Vietnam gained its independence only in 1975. Then the activities of the Army Museum were restored, but its essence and mission have changed: the museum staff now collected evidence of the brutality of the American army to show the senselessness and horror of the war and all military conflicts in principle.

At first the museum had a very provocative name – “The House of Showing War Crimes of U.S. Imperialism.” But 20 years later the policy of relations between the United States and Vietnam had changed and softened, peace treaties were signed, and the name of the museum changed as well. Now it was simply the Museum of War Victims, the second name being the Museum of War Crimes, without elaboration. And its mission became broader, more global: to show humanity how brutal and bloody any war is.

The museum is located in a large three-story building, and all the exhibits are divided into eight expositions, according to the subject matter. Each exhibit and each hall deserve a separate story.

The first and one of the most poignant parts of the museum exhibition is the collection of all kinds of printed materials related to the war: these are documents – pacts, agreements, treaties, war maps, newspapers of those years, posters, various artifacts, as well as photographs, frightening in their outright cruelty.

And the very first photo that opens the exhibition is an image of a Vietnamese girl with amputated arms. The girl is laughing, her face is flooded with autumn rain (the war ended in early September), her dark hair is sticking to her forehead, and a snow-white dove – a dove of peace and long-awaited, hard-won victory – is perched on her shoulder.

Losses on the Vietnamese side

For the visitor’s convenience, this exhibit is divided into two parts:

Agent Orange, a chemical weapon so nicknamed because it was stored in huge orange-striped tanks, was used by the Americans to poison the tropics to lure out Vietnamese guerrillas. The mixture turned out to be so poisonous that it not only ruined a huge number of human lives with terrible genetic mutations and cancers unlike anything even Chernobyl had ever seen, but it also poisoned acres of forest, killing animals, birds and fish for miles around.

The flora and fauna of the Mekong River, among others, have been greatly affected. The exhibition of the museum shows evidence of this nightmare – photos of mutilated people and embryos of unborn children with various mutations preserved in a special solution.

The second part of the exhibition focuses on the Songmi Massacre, a massacre of truly brutal cruelty when the U.S. military massacred over five hundred civilians in a Vietnamese village, including 173 children, 60 elderly people, and 182 women.

This part of the exhibition was created after the restoration of relations between Vietnam and the United States. The U.S. military provided their veteran orders and medals, military photographs, everyday objects and some other exhibits for the museum.

The military equipment is located in an open area, outdoors. Exhibits include American military helicopters and planes, tanks, even bicycles. 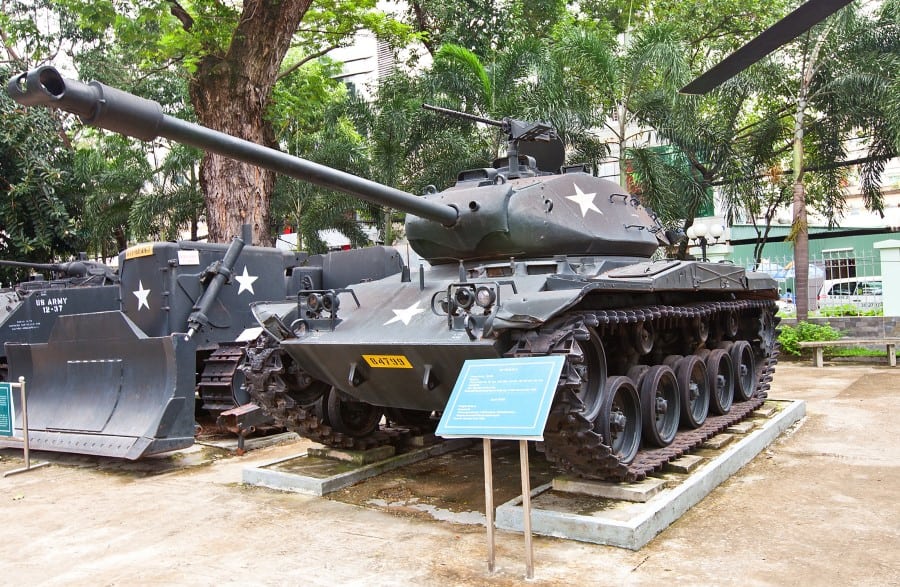 Not only military equipment, but also weapons – mostly of the American side – are on display at the war victims’ museum: these include bombs, mines, shells of various types, as well as rocket-powered containers in which ammunition was transported to the place of use.

These kinds of prison cells were a French invention, but it was during the Vietnam War that they were used as often as possible and with an especially subtle cruelty. In essence, the “tiger cages” were constructed on the basis of a metal frame and covered with grating woven of barbed wire. 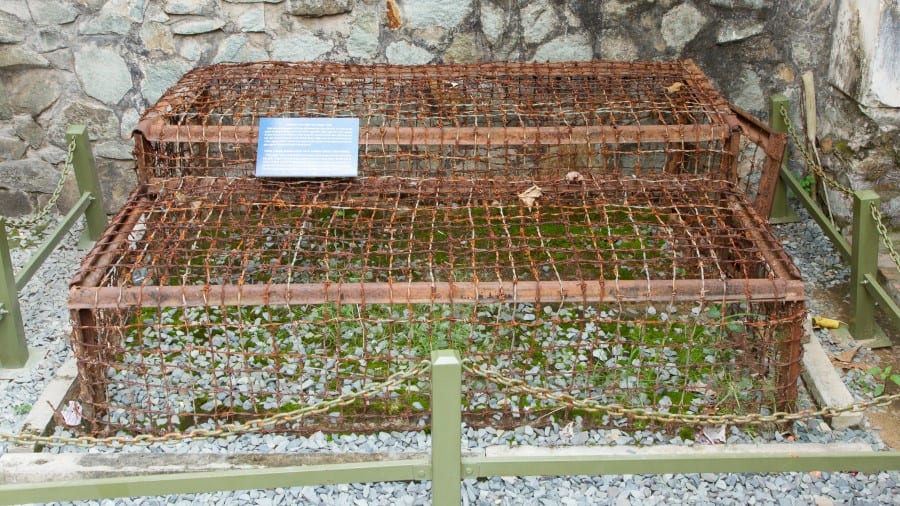 As a result, it was impossible to lean against the wall and there were no walls to protect against the cold and heat. Prisoners were placed naked in such cells, one at a time in bad weather to make them suffer from the cold, several at a time in summer to torment them with the heat.

Another murder weapon on display in the museum. Certainly this method of destroying human lives was used long before the Vietnam War, but it was also one of the most frequent during those hostilities. Next to the guillotine in the museum is a large wicker basket in which severed heads of suicide bombers are piled.

Other, less brutal exhibits periodically appear in the museum:

How to get to the museum?

The War Victims Museum is located in downtown Ho Chi Minh City, the other important attraction nearby is the Vietnam Independence Palace. Thus, both attractions can be visited in the same day, and you can walk around the historical and cultural center at the same time.

There is a bus stop not far from the museum, and buses #6, 14, and 28 stop there, so you can get to the place by them. The subway in the city is just under construction, which is nonsense in itself, because Ho Chi Minh City is the largest city in the country with a population of over 8 million people, however, this mode of transportation is not yet available.

You can also take a cab to the museum. It is better to order a car through a mobile app: the cost of the trip will be less and known in advance.

Schedule and cost of visiting

The museum of war victims works every day, without days off and holidays, which in itself is unusual, but very convenient for the tourist, who can visit this attraction in any convenient day.

Please note: from 12:00. to 13:30. museum is closed for a technical break, during which all tourists must leave the area.

Your visit should be planned with this break in mind, coming either to the opening or immediately after the break. It will take about 2-3 hours to see all the exhibits on display.

The cost of a ticket to the museum is 15,000 Vietnamese dong. For the Vietnamese themselves the price is quite different – only 2000 VND, but tourists have to pay 7.5 times more.