Viking Ship Museum is located on the peninsula Bulgde in Oslo. He is the most famous attraction of the Norwegian capital. Here are three surviving ships, dating back to the X century, and household items of Scandinavian sailors. The museum was established in 1926 and the building was designed by Arnstein Arneberg, one of Norway’s best architects.

History of the exhibit

The main exhibits of the Viking Ship Museum are three rooks that were raised from the seabed during excavations. Their age counts hundreds of years – historians are convinced that in the X century such models could cross the Atlantic. Traveler Helge Markus Instrad, whose monument is located at the entrance to the museum, found confirmation of this fact. In the middle of XX century he managed to find a Viking settlement in a small Canadian village. They were established in the X-XI centuries – about 450 years before the official discovery of America by Christopher Columbus.

Each of the ships has its own name – the Oseberg, Gokstad, and Thun ships. The museum has special balconies for the convenience of viewing all the ships. The first rook is near the entrance, she is named after the Norwegian village of Oseberg, near where she was found. In 1904 the ship was found in a trench filled with peat and stones. On board were the remains of two women, various household utensils and the bodies of several animals. The ship took a couple of decades to reconstruct. Its dimensions are 22 m long and 5 m wide. It is decorated with an original carved ornament.

The Gokstad ship occupies the eastern wing of the building; it is 2 meters longer than the previous vessel and is more stable. The construction is entirely made of oak, so it is characterized by particular reliability. It was on this ship that one could safely reach the shores of America from Europe. At the end of the XIX century, its reconstructed replica was able to cross the Atlantic without any problems. The rook was discovered in 1880 in a mound on the grounds of Gokstad Farm. Thanks to the clay soil, the construction of the ship over hundreds of years is almost intact. Inside was the skeleton of a tall man of advanced age. Archaeologists speculate that he may have been a Viking konung Olaf Geirstad Aleph.

In the western part of the museum there is an opportunity to see the Thun ship, represented only in parts. Unfortunately, it could not be preserved in its original form to this day. The ship was found in 1867 in the village of Rolvsey near the small town of Thun.

According to Viking custom, it was customary for chiefs to be buried in ornate boats, as people were convinced that the ruler retained his high status even after death. Next to the body in the boat were placed dishes, weapons, armor, jewelry and other things that could be useful in the other world. Slaves killed after the death of their master were also placed in the boat. The ship was sent on an open voyage or was deliberately sunk with heavy anchors.

During the excavations on the sea shores it was possible to find many items of everyday life of the Vikings. Among them are household utensils, fragments of fabrics and canes with tips made in the form of heads of various animals. All these finds are on display in the south wing of the Viking Ship Museum. Viewing the exhibits, you can clearly imagine the features of life of people who inhabited our planet more than a thousand years ago.

Skillfully made cart An animal head, which decorated the nose of the ship

Visiting the Viking Ship Museum is a paid, adult ticket costs 60 kroner, reduced price – 35, children – 30. Children under 6 years of age can enter the museum completely free of charge. You can buy a “family” ticket for two adults and one child for 140 CZK. From May to September the museum is open from 9 a.m. to 6 p.m. and in all other months from 10 a.m. to 4 p.m. There is free Wi-Fi, QR codes and useful information for tourists. You can come here with your whole family – kids will have something to occupy them at the museum. 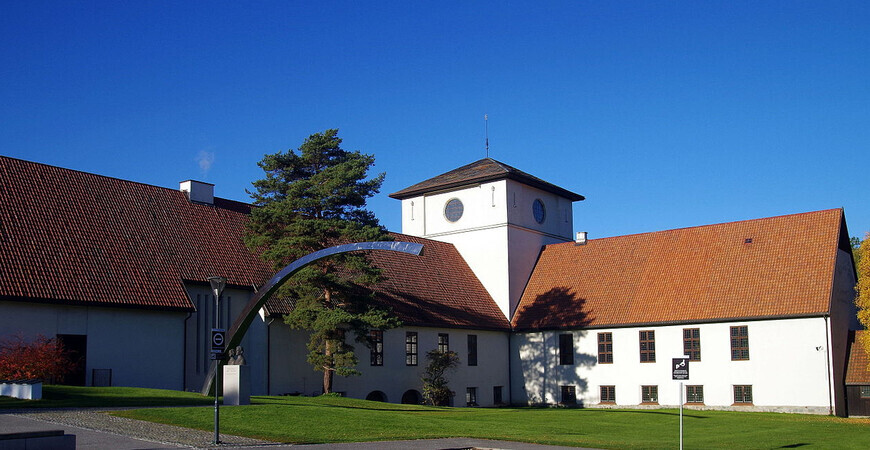 Viking Ship Museum (Vikingskipshuset) – one of the most visited and unusual in Oslo. It contains priceless exhibits – three ships on which the Vikings crossed the ocean more than 1,000 years ago, as well as items of their everyday life – carts, clothing and jewelry, cooking utensils, etc.

The museum was founded in 1926, after an excavation of a large Scandinavian boat, in the 1930s two more ships were added to the exposition. And in 1957 completed a separate room, which housed other exhibits related to the history of the Vikings.

Since then the museum has become very popular among tourists. Its fame does not prevent even the fact that it is located on the peninsula Bygdø, away from hiking trails, which is almost impossible to reach by public transport.

In the museum building there is a souvenir store, where you can buy souvenirs of different shapes and sizes related to the Viking era.

Viking Ship Museum is small in size, it has only four rooms, located crosswise, but they contain priceless artifacts from the Viking Age and – most importantly – three Scandinavian ships, recovered from the seabed. They are more than 1,000 years old.

The first ship that started the museum was the Oseberg boat, named after the place where it was found. It was found in 1904. The boat dates back to the IX-X centuries and is a well-preserved example of a ship, on which the Vikings sailed the seas and oceans. To modern man it looks more like a boat, but in those days it was a miracle of engineering: the boat withstood waves and storms, as evidenced by many chronicles and documents of antiquity. The length of the boat is 22 meters, width – 6 meters.

After a certain period of time on sea service, the ships were used as burial places. The Oseberg boat was the last resting place for the two noble women whose remains were found in it, and in addition to them – the objects of everyday life with which it was accepted to bury the dead. Among the relics recovered from the ship were a sleigh, a wooden wagon with well-preserved carvings, five carved animal heads, and five beds. Also found were the remains of livestock, which also went with the deceased to the burial: 15 horses, 6 dogs and 2 cows.

The second exhibit is in the next room of the museum. It is a ship from Gokstad . It was built in about 900 AD and about 10 years later became a funeral boat for a member of the nobility.

This vessel is more massive and richly decorated, it was obviously intended for long voyages. It is thought that this was the vessel the Vikings used to cross the Atlantic and reach the shores of America long before Christopher Columbus arrived there.

The tomb with the ship from Gokstad was plundered in antiquity, so no especially valuable artifacts were found, but some household items survived: a game board and chips, kitchen utensils, six beds, horse harness, tent, sleigh and three boats. Animal remains were also in it: 12 horse skeletons, 8 dogs, 2 peacocks and 2 hawks.

The third exhibit of the museum is also located in a separate room. This is the Thun ship, named after the place where it was found – the town of Thun. It was also found in 1867 as a barrow, and it dates back to about 900 AD. This is a fast ship of a type with twelve rows of oars.

Of the three ships, this one is the worst preserved, but some everyday items such as weapons and chainmail, as well as horse skeletons, have also been found in it.

The museum has overhead decks for viewing the exhibits from above. From them you can see the ships in the panorama and see some details not visible from below.

Make a fascinating journey into history and the sea waves will help film, which shows visitors several times an hour, projecting a video on the walls of one of the rooms of the museum. It creates the effect of movement on the ship, visitors feel like real seafarers, learning a brief history of Scandinavia and maritime campaigns of antiquity.

READ
The Bargello Museum in Florence, exhibits and photos

Ticket price to the Viking Ship Museum in 2022

The cost of a ticket to the Viking Ship Museum depends on the age of the visitor and is for a full day’s stay on the grounds.

The ticket is valid for 2 days from the date of purchase. Tickets can be purchased at the ticket office at the entrance, no online sales. Both cash and credit cards are accepted.

Prices may change. Find out the latest information before you visit, on the official site of the Viking Ship Museum in Oslo.

How to get to the Viking Ship Museum in Norway

Vikingskipshuset museum is located on the peninsula Büdgö, away from the historic center of Oslo, so there are not many options to get to it.

From public transport to the museum there are two bus routes – № 30 and 30N. Both leave from Oslo City Hall Square. The stop in front of the Viking Ship Museum is called Vikingskipene. It is located almost opposite the entrance to the building, a 2-3 minute walk.

An interesting journey is the journey to the Viking Ship Museum by ferry. This method of travel is available only in the summer – from May to October. A round trip ticket for children (under 6 years old free, children’s fare from 6 to 18 years old) costs 38 NOK, an adult ticket costs 78 NOK. Journey time is about 50 minutes. From the ferry pier Dronningen to the museum you can walk (less than 1 km) or take a cab. More information about ferries, prices and schedules can be found here.

It is also convenient to get to the Viking Ship Museum by car: there is a paid parking lot behind the building. The cost of a parking space is: in summertime 12 NOK per hour, in wintertime it’s free. Or you can use cab apps: Uber, Kiwi and others.