Villa Hadrian’s is a unique creation that absorbed not only the culture of the Romans, but also the features of many European countries.

Hadrian was one of the most famous emperors of Rome, who gained his popularity as a philosopher, architect, and artist. Almost all the buildings during his reign were designed by himself. Hadrian loved to travel the world, so every trip he was accompanied by an entourage of artists who documented everything they saw around them. And naturally, in his old age, he decided to build something unusual, unlike other buildings in the state. The Villa Hadrian became such a structure.

The land at Tiburtine Mountains, which had belonged to Hadrian’s wife, was chosen as a place of construction. The year 125 marked the beginning of the foundation of the villa, which lasted until his death. It is even said that the project was designed by Hadrian himself.

And so ponds, alleys, libraries, theaters, cathedrals and the emperor’s palace grew on an area of 120 hectares.

The architecture of the buildings clearly traced all of Hadrian’s travels. His palace absorbed the traditions of Egypt, Greece and the countries of the East.

Because of his short stature, some of the architectural elements are made intentionally smaller so that the emperor felt comfortable. For the decoration of the interior decoration Hadrian from different countries brought original paintings, statues, caryatids and other works of art. The complete harmony of all the buildings is amazing. It is immediately clear that the villa was built only for quiet time, not for noisy celebrations. Entire underground passages were created for the servants.

In terms of its size and interior decoration, the Hadrian’s villa is considered one of the most unusual buildings of the time.

Hadrian was a good ruler. He carried out policies to improve life in the provinces. The emperor spent many hours each day traveling through his dominions. In practically 25 years he had visited all the most remote corners of the state. Such a love of travel by the ruler was reflected in the names of the buildings of the villa. Many of the buildings are named after the landmarks of the countries he visited.

The size of the villa is staggering. From the beginning, it was spread out over an area of 300 hectares. Although all the buildings were close to each other at a distance of 1 kilometer. Only one fifth of the entire villa has survived to this day, but despite this, even it has to go around for a day.

According to the research, scientists found out that the villa was built on the site of an old republic, dating back to the 2nd century BC.

The evidence served as numerous ruins, found in the territory of the palace of the Emperor. You can get to the villa by walking through an alley of cypresses along a paved road. At the entrance you meet a huge nine-meter wall, immediately behind which you can see the area Pechile with the reservoir in the center. All this splendor has come down to this day in a dilapidated state, but still strikes the imagination. It is believed that this place used to be a stadium. The square is bordered on one side by a wall with numerous windows on the same level, presumably intended for servants. Immediately below it is the entrance to one of the underground roads.

All the constructions of the villa were built from the limestone of tiburin. It was in honor of him that the town near the villa was named. Now in this place is the city of Tivoli.

Another popular place in the villa is the large Thermae. Here you will see a huge number of Roman baths, springs with cold and warm water. In the thermae there are still heating sources based on hot water and air. It has been suggested that they could be used by both women and men.

At the Villa Hadrian there are many more attractions that will surprise any tourist. It is worth it to come and see everything with your own eyes. 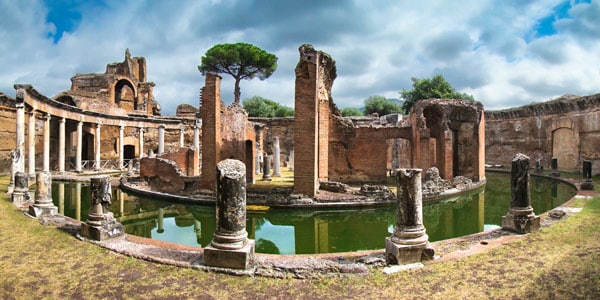 Villa Adriana in Tivoli is one of the most impressive ancient buildings in the Lazio area. The building dates back to the second century A.D. In spite of its dilapidated state you can admire the power of its ideas and the perfection of its realization. 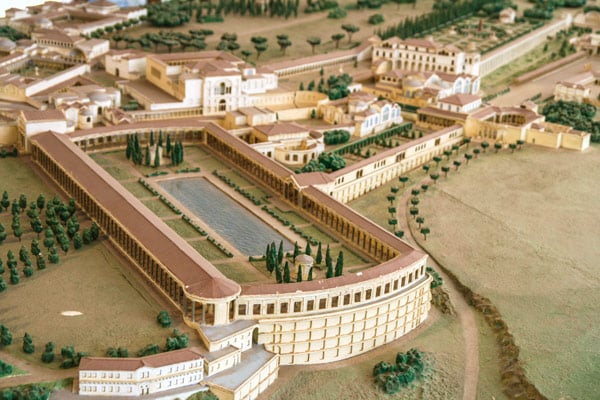 The Roman Emperor Hadrianus (Publius Aelius Traianus Hadrianus), the famous philosopher of antiquity, hated the luxury and bustle of the palace on the Palatine hill. What he needed was a place of solitary contemplation and study in natural surroundings.

So the idea of building a country residence arose. The site was not far from Tibur, now Tivoli, and lured him with its beautiful scenery and the peaceful silence that was dear to the philosopher-emperor’s heart. The land was inherited by Hadrian’s wife Vibia Sabina. Earlier there was a manor house of the II-I centuries B.C. It was decided to keep the atrium of the old villa, and the emperor altered and enlarged the other rooms according to his preferences.

The residence includes more than 30 objects, all of which bear the names of the Roman provinces visited by Hadrian.

The emperor valued his peace above all, which is why the villa has an extensive system of underground passages for servants and carts with supplies. Hadrian did not want the voices of the servants or the squeaks of the cartwheels to disturb his family and guests.

The buildings of the villa

The original site of the villa was 300 hectares, of which the structures occupied one square kilometer. Today only one fifth of the complex has been preserved. We do not know for certain after which provinces the finicky emperor named the structures of his villa. Only Canopus is precisely identified, the rest is speculation by researchers, not confirmed by rigorous evidence.

The main building material was the local tiburtine limestone. For the arches and other architectural elements, plintha, a thin-plate brick 2.5 cm thick, was used. Two paths lead directly to the villa: a cypress alley and an asphalt road near the old olive orchard. 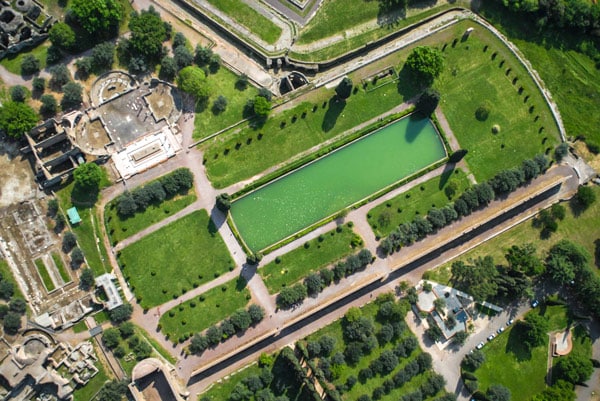 Pecile is a rectangular area measuring 232 by 97 meters, behind a strong nine-meter wall near the entrance. It used to be surrounded by a wall with elegant double-sided porticoes, which are now almost completely destroyed. In the center of the square there is a small pond. It is possible that the structure was an imitation of an ancient Greek stadium. Adjacent to the Pecilae, the Cento Camerelle was a “hundred rooms” for the slaves who served the imperial family and guests.

In the lower part of Cento Camerelle an underground road was found leading to the Grandi Terme and Piccole Terme, separated from each other by a small courtyard. 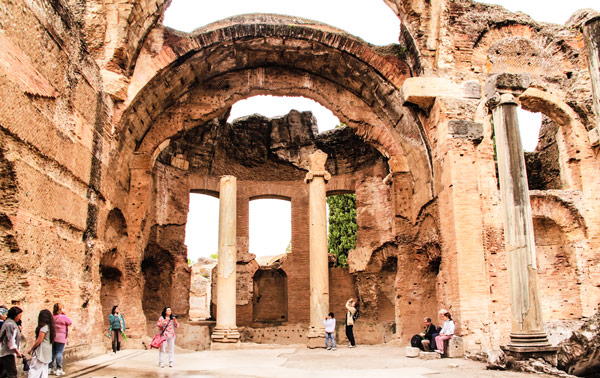 Researchers suggest that the Baths were intended for separate bathing of men and women.

Remains of two types of heating system – dry (heated air) and humid (hot steam) have been preserved in the bath rooms. The area next to the Great Baths, the palaestra, was used for wrestling and fencing. There was also an indoor hall for ball games.

Behind the Great Baths is the Pretoria, the multi-story room for the imperial guard. It is the best preserved part of the villa. 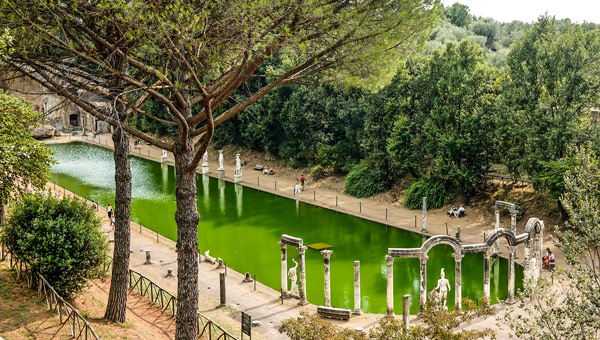 The prototype of Canopo is the Egyptian settlement of Canob (now Aboukir) where Antinoi, the emperor’s favorite, drowned. It is the most interesting of the sites of the estate, is a pond measuring about 100 by 20 meters, decorated with sculptures and columns around the perimeter (not preserved). The Serapeum, an imitation of the Egyptian temple of Serapis, was built near the Canopa. From the vault of the Serapeum you can enjoy a great view of the Thermae and the Canopa, with its row of sprawling pine trees. 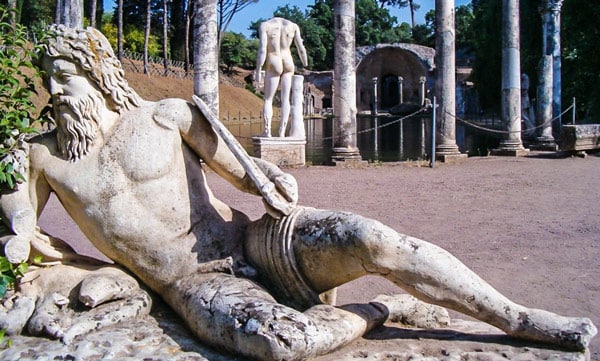 The Museum of Canopa is housed in the ancient tabernae buildings that surround its valley on the right. It contains a small collection of ancient Greek statues and Roman casts, the jewel of which is a copy of the statue of Venus of Cnidus.

The Golden Square, located in the northeastern part of the villa, is a spacious atrium with a double portico, the open part of which consisted of sixty granite and marble columns. On one side of it is the imperial hall with a well-preserved dome on eight marble columns and a vestibule with exquisite floor mosaics.

The Sea Theatre (Teatro Marittimo) is remarkable for its intricate architecture – a circular room on a circular island framed by a water channel and a cylindrical wall with a circular colonnade. Bridges leading to the island were controlled only from within. It is assumed that the building on the island was used for the retreat of the imperial family, so it is often referred to as the Island Villa. 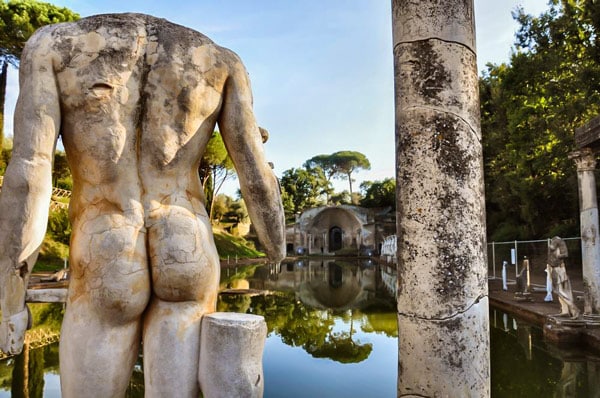 Hadrian preferred to settle in a country manor, and from here he ruled the empire until the sunset of his days. His descendants were not into philosophy, so they used it only as a summer residence . At the end of the 3rd century the villa was restored by Emperor Diocletian (Aurelius Valerius Diocletianus); later Constantine the Great (Flavius Valerius Aurelius Constantinus) took some works of art from here for his palace in Constantinople. In the 6th century the Ostgoths and Byzantines encamped here, the villa was in ruins and fell into disrepair. In the Middle Ages the inhabitants of Tivoli used it as a source of building materials for their houses. 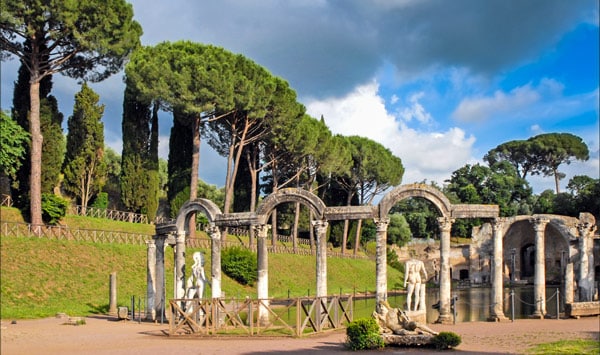 For the first time archaeological excavations were carried out only in the 16th century, when by order of Cardinal Ippolito II (Ippolito II d’Este) from the estate were removed many statues and marble columns to decorate the Villa d’Este in Tivoli. In the XVIII century a part of Villa Adriana belonged to Count Giuseppe Fede, who planted the cypress trees that still grow there today. Since 1870, the villa is state property of Italy, since 1999 it is a World Heritage Site of UNESCO.

Villa Adriana is located 4 km from Tivoli. You can get there by bus number 4, going from the central square. Bus schedule is posted on the website www.cattivoli.com.

The villa opens at 9:00, closes an hour and a half before dark. Tickets cost €8; for EU citizens €4; during the Annual Exhibition (April to October) €11 (reduced price €7). From March to October, there are excursions for schoolchildren for 1 euro per person. On the first Sunday of each month admission is free. Holidays are January 1, May 1 and December 25.