Villa Aldobrandini towers over the square in Frascati and dominates nearby Rome.

Inside are the famous frescoes by Cavalier d’Arpino (the master of Caravaggio).

Surrounded by a splendid Italian garden, it is made unique by the grandiose 2500-square-meter nymphaeum with stupendous fountains and terraces on several levels.

The Villa has an indoor capacity of up to 300 people and outdoor capacity of up to 2,000, making it ideal for organizing large outdoor events , public events , gala dinners and ceremonies with a large number of guests. There is the possibility of erecting tensile structures so you can dine indoors in all weather conditions, enjoying the beautiful view of the nymphaeum and fountains.

The catering service is personally supervised by Stefanina Aldobrandini, who for more than 20 years in the numerous palaces, villas, castles at her disposal has succeeded, thanks to highly qualified staff and the use of tablecloths, porcelain, antique silverware and period liveries, in recreating an atmosphere of pomp and efficiency that recalls the hospitality of the great private houses of other times.

Villa Aldobrandini spreads out over a series of tall, regular terraces, and on one in particular stands the palace. The building’s main façade, full and severe, in keeping with the style of Giacomo della Porta, punctuated vertically by pilasters, and concludes in the central part with a superelevation enclosed by a huge broken tympanum.

Underneath, two bases support as many terraces-walkways, with two slender chimneys in the form of oval towers. The terrace located in front of the building surrounded by a double ramp. The rear facade characterized by a projecting forepart that soars upward and ends in a triangular gable, thus constituting a kind of observatory for the fountains and water features of the upper part of the garden. The interior conceived with a careful study of the proportions of the rooms, with a basement reserved for the cellars as well as the gentlemen’s service quarters and with an oval-shaped snail staircase leading to the floors. It is possible to access the main floor by the staircase or directly from the rear facade entrance. A vestibule with a side chapel precedes the great hall that occupies the central part of the floor while the rooms are located on either side of the hall. The walls of the salon, decorated in the first half of the eighteenth century by Amnesio de Barba of Massa Carrara, are embellished with grass-juice paintings in the guise of tapestries depicting the Workshop of Vulcan and Parnassus. The vault frescoed with the Triumph of the Pamphili House. This hall contains the famous bronze bust depicting Clement VIII Aldobrandini, by Taddeo Landini (1550-96), and a large fireplace, featuring a broken tympanum bearing an inscription with the name of Pietro Aldobrandini. As many as five of the rooms on this floor were painted by Cavalier d’Arpino, and depict images of a biblical character; other walls, however, are lined with richly decorated ancient Korans. The chapel, dedicated to St. Sebastian, was frescoed by the Bolognese Giovanni Piancastelli.

The upper floor housed the rooms for the staff in Pietro Aldobrandini’s service, while the top floor, luxuriously furnished and with a central coffered hall, contained the rooms reserved for guests. Behind the palace we encounter the Teatro delle Acque, consisting of a vast hemicycle flanked by two rectilinear bodies, which has niches with columns and recesses, decorated with caryatids and other reliefs, made by Ippolito Buti (1604-5). The niches in the hemispherical part contain statues created by Jacques Sarrazin, each preceded by a water jet. The central niche is distinguished by the presence of an Atlas holding up the world. From the basin located in front of the central niche emerges the statue of the giant Enceladus, who noisily threw water from his mouth. According to what Monsignor Giovan Battista Agucchi, secretary of Cardinal Pietro Aldobrandini, indicated to us in his writing “Relatione,” the Atlas alluded to Clement VIII and the statue of Hercules in the act of helping him referred to Pietro Aldobrandini. The Hesperides recalled their mythical and fabulous garden, which by transposition was compared to that of the Villa Aldobrandini. The myth of Hercules still returned to the top of the villa, which could be explored with the eye from the palace.

In the left side arm of the Teatro delle Acque is the chapel dedicated to St. Sebastian, the patron saint of the Aldobrandini family, decorated with paintings by Domenico and Tommaso Passignano. In the right arm, on the other hand, we find Apollo’s room (1615-18), whose vault has decorations made by Domenico Passignano.

The realization of the hydraulic devices is due to Giovanni Guglielmi. While the frescoes depicting the “Ten Stories of Apollo” are the work of Domenichino, who enlisted the help of Viola for the landscapes. The floor adorned with arabesques and elements proper to the Aldobrandini coat of arms.

Behind the Teatro delle Acque we find the great Water Staircase, limited at the top by two columns symbolizing the Pillars of Hercules, from which the water thunderously descends. The sides are traversed by two staircases leading to the upper level. The highest part of the garden was characterized by the Fountain of the Shepherds. Below the palace, in the retaining wall of the oval terrace, there is a large niche, which was once enriched with a large amount of water, made by Giocondo Della Porta and the famous fountain-maker Orazio Olivieri, the author of the many water features in the villa. The villa, in addition to displaying an evidently Vignolesque influence, is linked, planimetrically, to Domenico Fontana’s Villa Montalto, the Belvedere courtyard, and Raphaelesque designs for Villa Madama. It also represents the evolution of Renaissance schemes at the dawn of the Baroque. 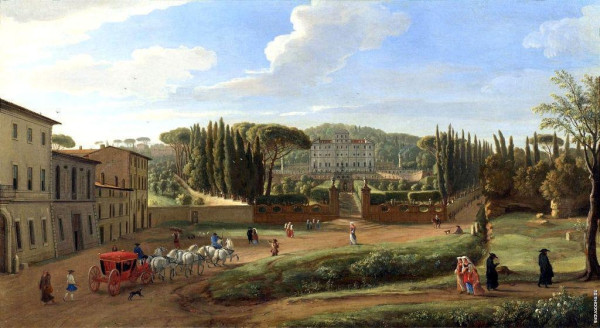 But Cardinal Aldobrandini, like any self-respecting man, had a villa not only outside the city, but also directly in the capital. And while the country residence still belongs to the family, there is still some confusion about the Roman villa. While this is the case, part of its park was opened to the public. Just a few years ago. 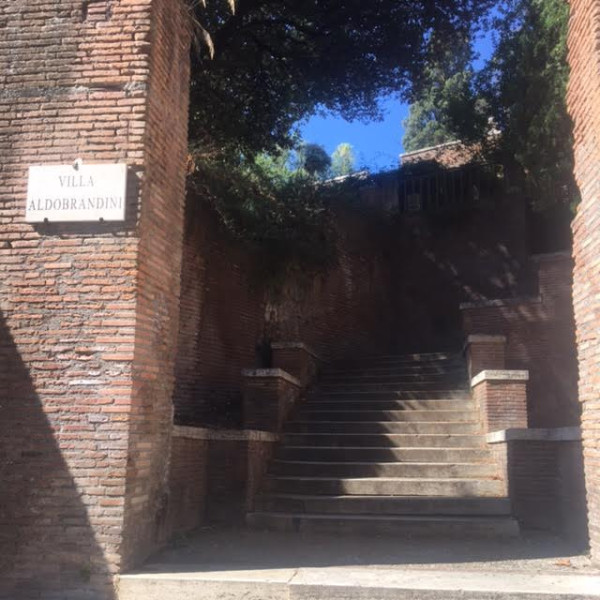 Many inexperienced travelers in Rome, bumping into blank walls, inconspicuous facades, dry leaves underfoot dragged by the wind, cannot imagine what is hidden behind the blank wall of a narrow alley. Rome hides its treasures from the rotund. So Villa Aldobrandini, at first sight, will not impress the curious. And even if he walks around it and finds a narrow passage behind the dumps, he is just too lazy to climb the many stairs. 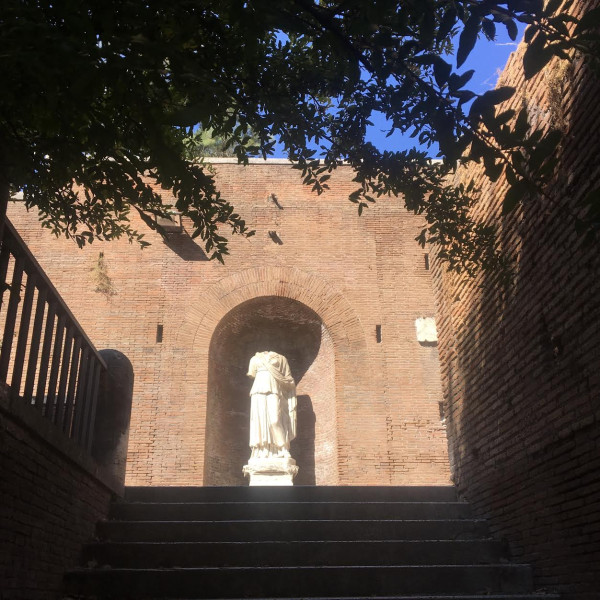 So this tiny park above Rome, almost flush with Emperor Trajan’s column, is always empty. 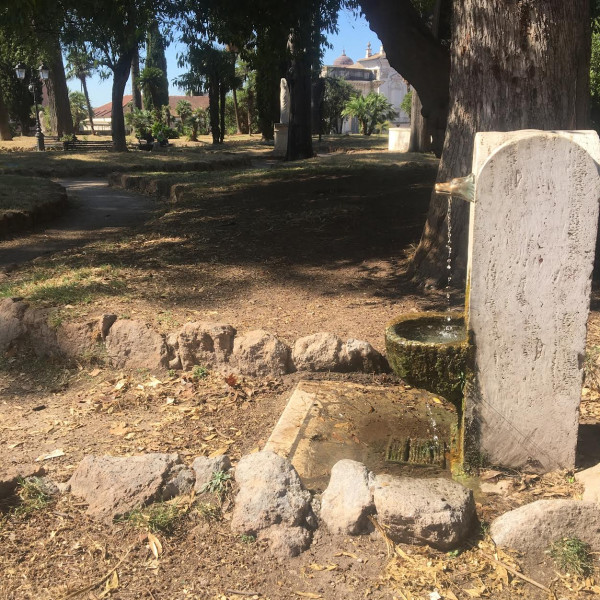 The first thing that pleases the traveler, after a few flights of steep stairs, is the spring. 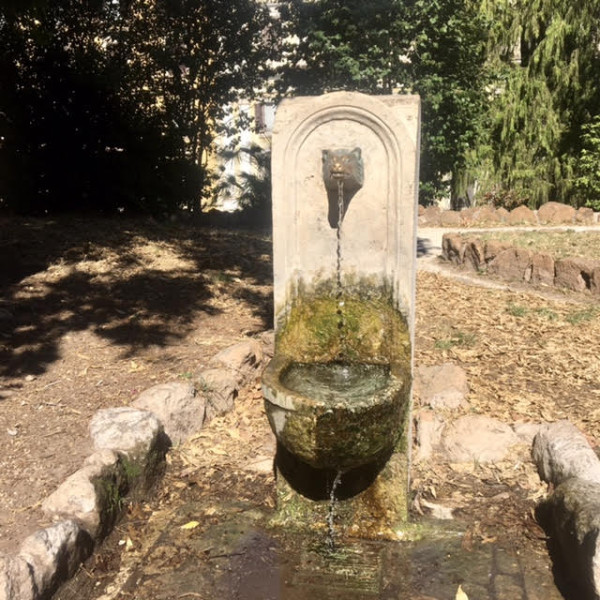 Water flows from the mouth of the wolf – the symbol of Rome. And then begins the shade, the benches, the chirping of birds and the intoxicating views. 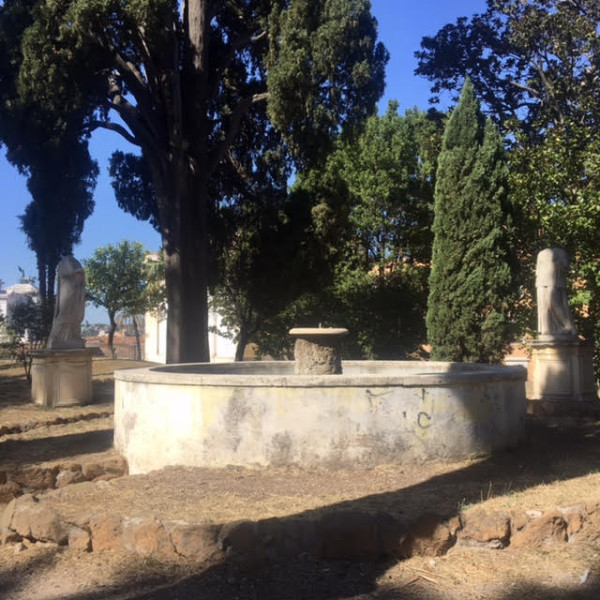 The four goddesses are frozen in front of the fountain. Roman marble. It is likely that these statues were found here, and probably date from before Christ.

It is customary in this city to leave what you find in the same place. So in our courtyard is a sarcophagus from the temple of Cybele from the early first century. In the ’60s the elevator was being added and found. They cleaned it up and put it back. It’s so customary here and antiquity is everywhere, and everything around is authentic.

The Tiber has receded from the heat – the pressure today at all the fountains in the city was weak, and yet you can feel the proximity to coolness. Now we can start looking around. 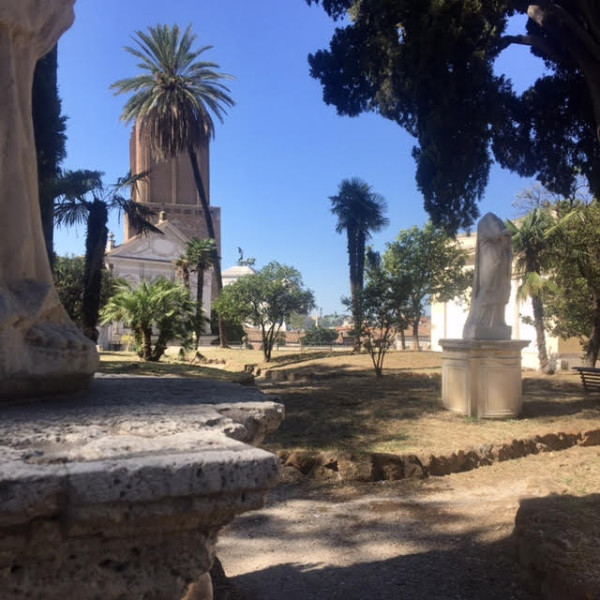 To the left is the white baroque pediment of the convent of Catherine of Siena, the great maiden, doctor of the Church (she persuaded through diplomacy to return the papal throne from Avignon to Rome). Behind the marble is the formidable shadow of the medieval Tower of the Police, part of the giant Trajan’s Forum. Behind it, a little farther away, are the winged geniuses of Rome from the Altar of the Fatherland. And here is the Altar of the Fatherland up close. 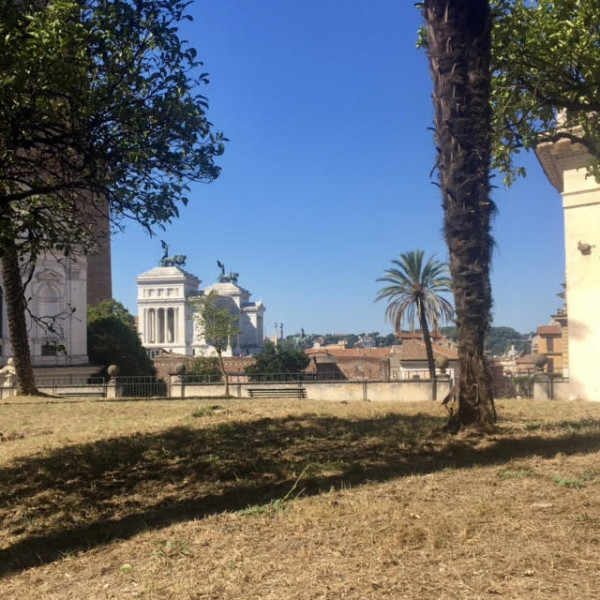 From the villa’s observation deck, you can see what’s going on at the main entrance to the papal palace in the Quirinal – now the president of the country sits there. And by the way, I can’t get there for a tour – unique interiors, uniquely preserved! Take a note for anyone who’s going to Rome – it’s a long time to book there.

In short, it was a walk to work for the Cardinal. 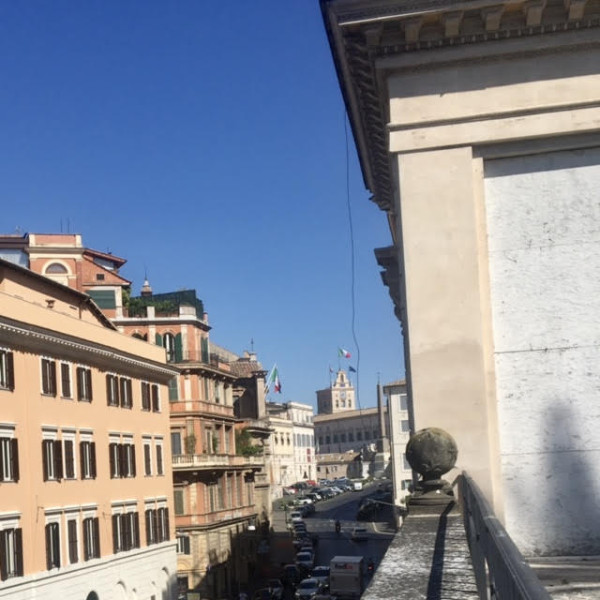 There is another fountain here, but it is not photogenic now. In general – in front of you sad pictures of summer. In a few months the sun burns out everything here. And now it still burns, but not so ruthlessly. Here nature is tired, thirsty for autumn. It languishes like we northerners languish in spring. One month to go and everything will come alive And the green parrots will quarrel for olives. Everything will bloom and migrants will fly in. Even flamingos flew in a couple of years ago. They stayed at the Villa Borghese – it’s still a decent garden, there’s a lake. We called us said: run urgently! And we were too lazy to run. To imagine such a thing is also beautiful.