Historical Synopsis – Villa Doria Pamphilj is a vast palace and park ensemble on the Via Aurelia Antica in Rome in the west of the historic part of the city, in Trastevere, a mile and a half south of the Vatican. The villa was built between 1644 and 1652 by Alessandro Algardi and Giovanni Francesco Grimaldi (1606-1680). The client was Prince Camillo Pamphili, son of the “papessa” Olimpia Maidalchini. After the demise of the Pafmili family, the Villa was inherited by the Doria family, who sold it in 1965-71 to the City Hall of Rome. Villa Doria-Pamphili is located on the Gianicolo Hill (Ancient Roman Janiculum) and lies within the limits of ancient Rome. From the hill of Gianicolo began the Roman Aurelian road. Vineyards and a small estate existed here until 1630. The Pamphili family bought the manor after their marriage to Olimpia Maidalchini. It was used as a country home in the summer. The family had money and began buying up neighboring vineyards, greatly increasing their holdings. In 1644, 70-year-old Cardinal Giovanni Batista Pamphili was elected pope and took the name of Innocent X. Among the noble Roman families he was considered an upstart, so his primary concern was to strengthen the authority of the Pamphili family in Rome, originating from the provincial Gubbio. In order to raise his status, the pope began to build a new villa. The new pope did not get along with Lorenzo Bernini, bringing the sculptor Alessandro Algardi, Bernini’s rival, to court. For the Pope, who knew little about art and was not a patron of the arts, this was a very good choice, since the talented Algardi had long made his way to recognition and fame, which was prevented by Bernini’s “artistic dictatorship” at the papal court. Now he had the opportunity to work to his full potential. Alessandro Algardi was not an architect, but the pope entrusted him with overseeing the design and construction of the new villa. Algardi involved architects in the design, including Giovanni Francesco Grimaldi, who took advice from Carlo Rinaldi and possibly Francesco Borromini. According to the original design, the villa had a high central section and side wings. The building was laid out on a hillside. The northern facade looks smaller than the southern one. The hillsides and the flat area-terrace on the south were used to create a regular Baroque park with parterres and a fountain The villa is surrounded by a park of about 9 square km, the largest park in Rome, founded in the 17th century and laid out in the 18th century by Francesco Bettini. In 1849, during the Risorgimento, a battle took place in the villa. The French army began shelling the area, destroying the nearby “Casino of the Four Winds”, Villa Corsini. Prince Doria-Pamphili rushed to buy the Corsini land, almost doubling the size of the park. A triumphal arch (architect Andrea Burizi Veche, 1817-1911) was built in 1859-60 in place of the ruined villa. In 1960, the Via Olimpica was drawn through the park. Since 1971 the park, bought back from the previous owners, is open to the public.

We will walk through the park and look at the palace. We will visit Swan Lake and see its inhabitants. View of the lake in front of the palace 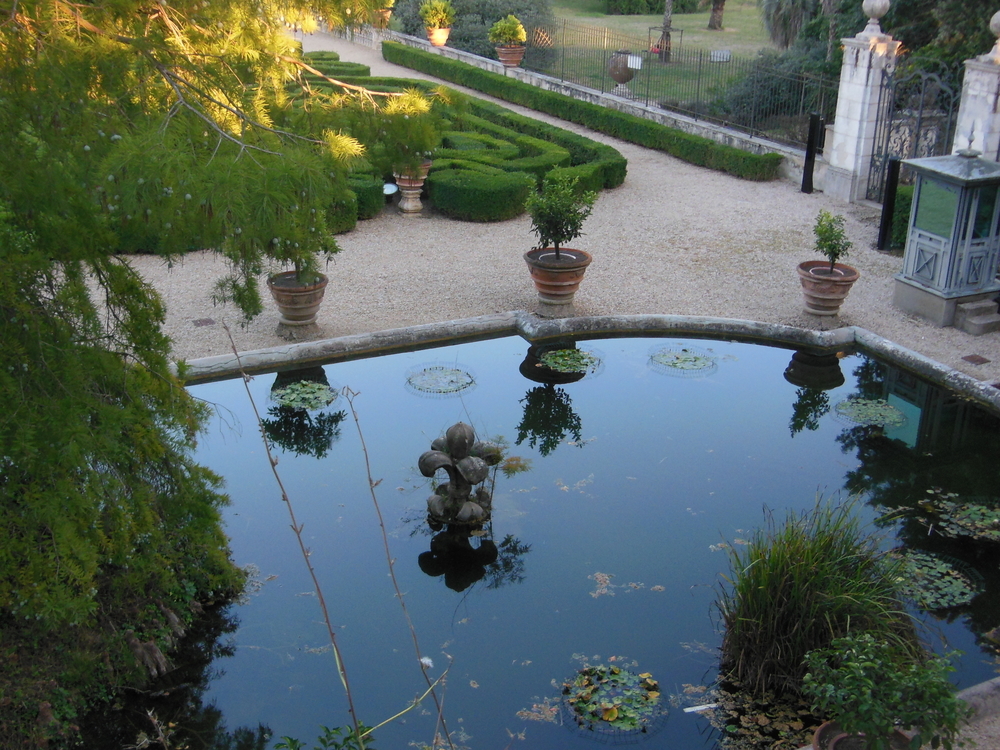 A view of the palace’s labyrinthine gardens. 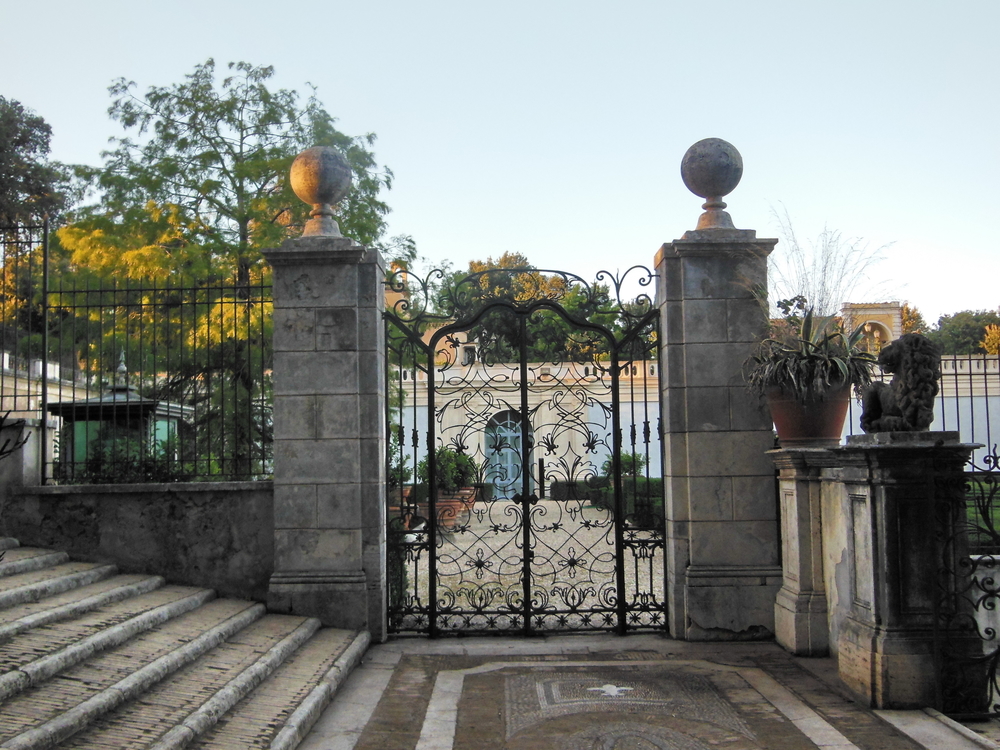 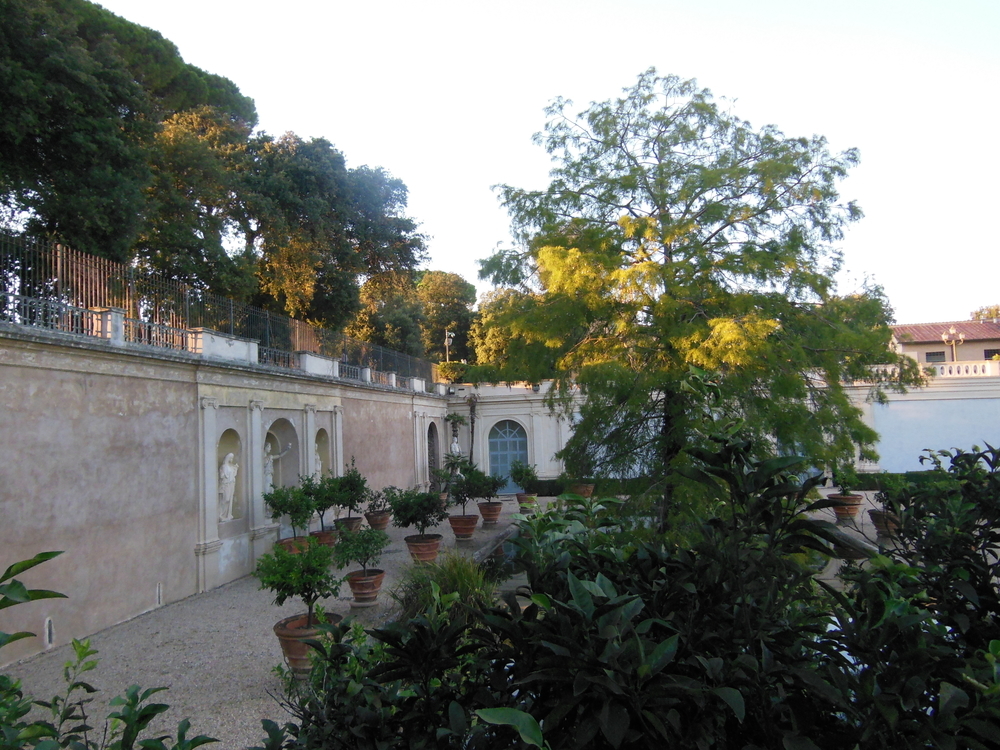 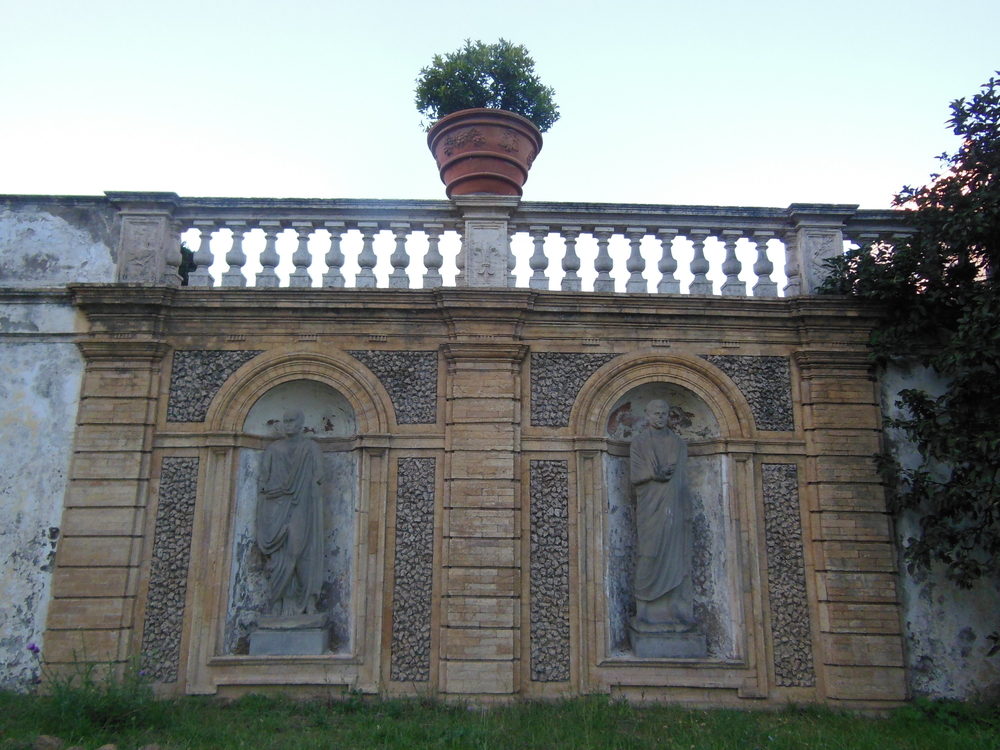 The lily at my feet 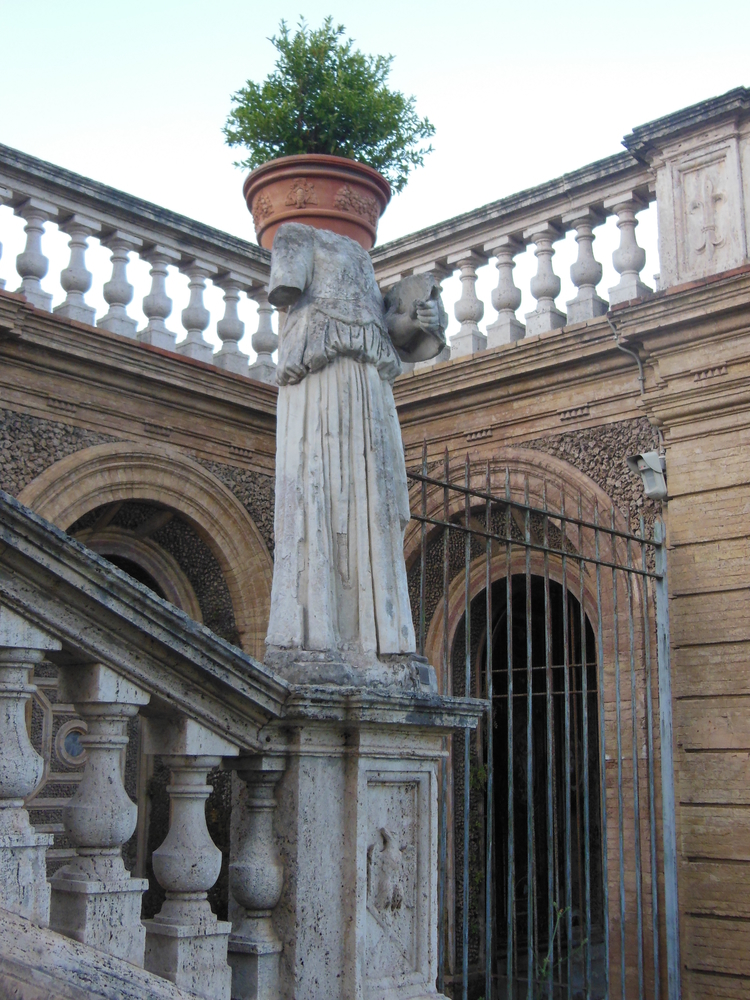 The fountain spring seems to be very old.

Statue in the park at the palace The park area of Villa Pamphili.

In any weather, the villa is full of vacationers, tourists and athletes. 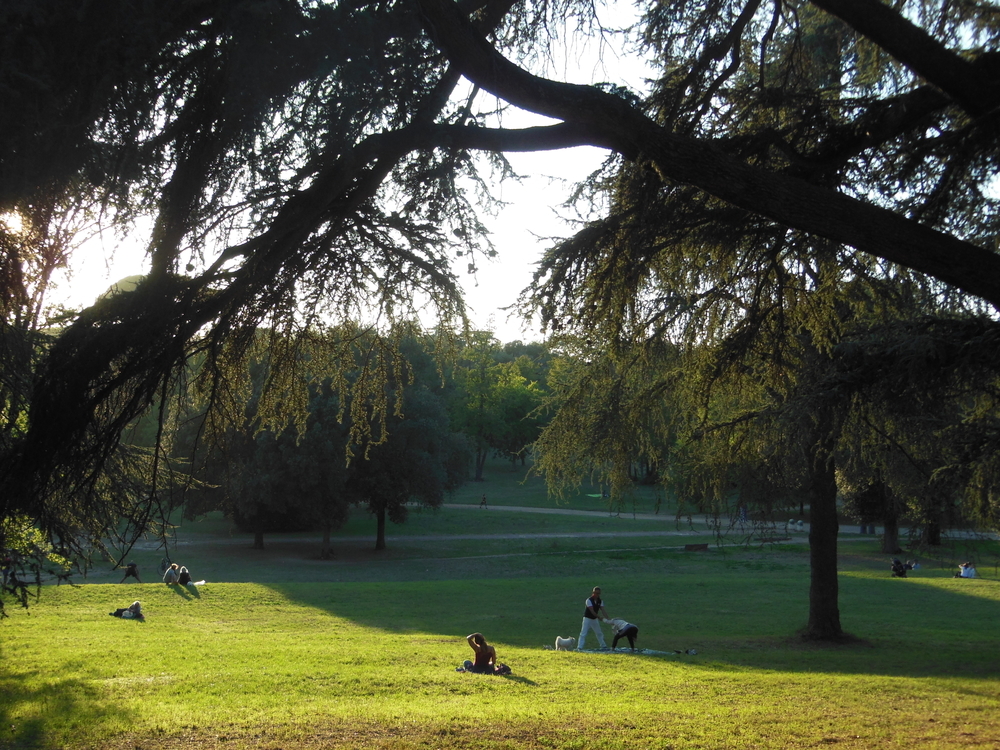 The fountain with the royal lily

View at the water cascades from the upper deck 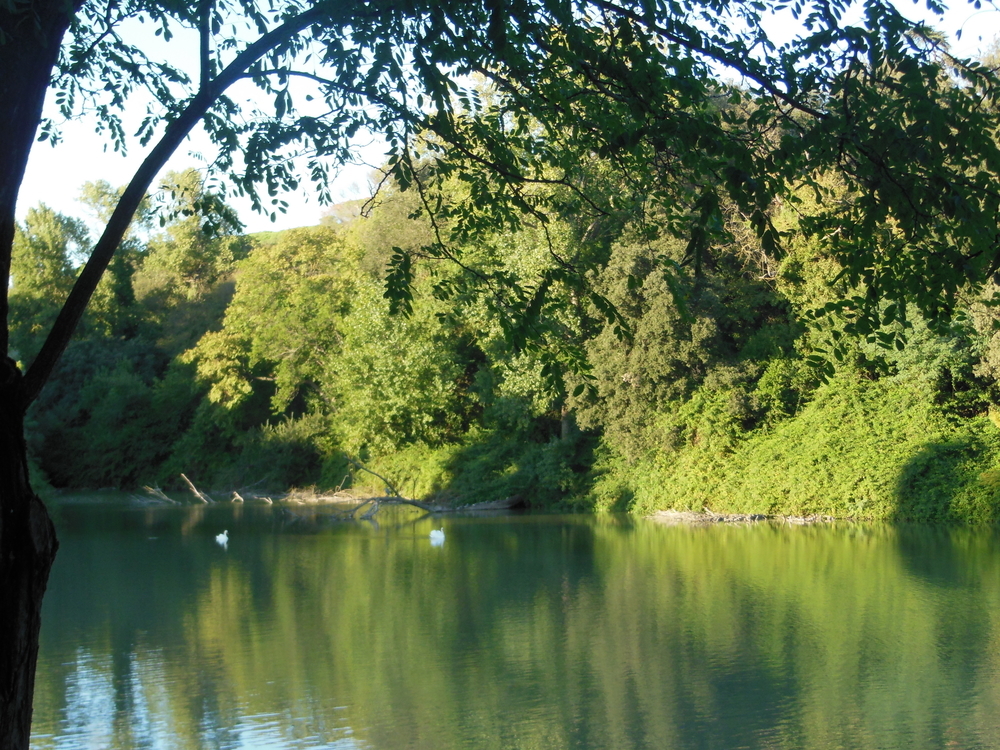 On the lake live a few swans 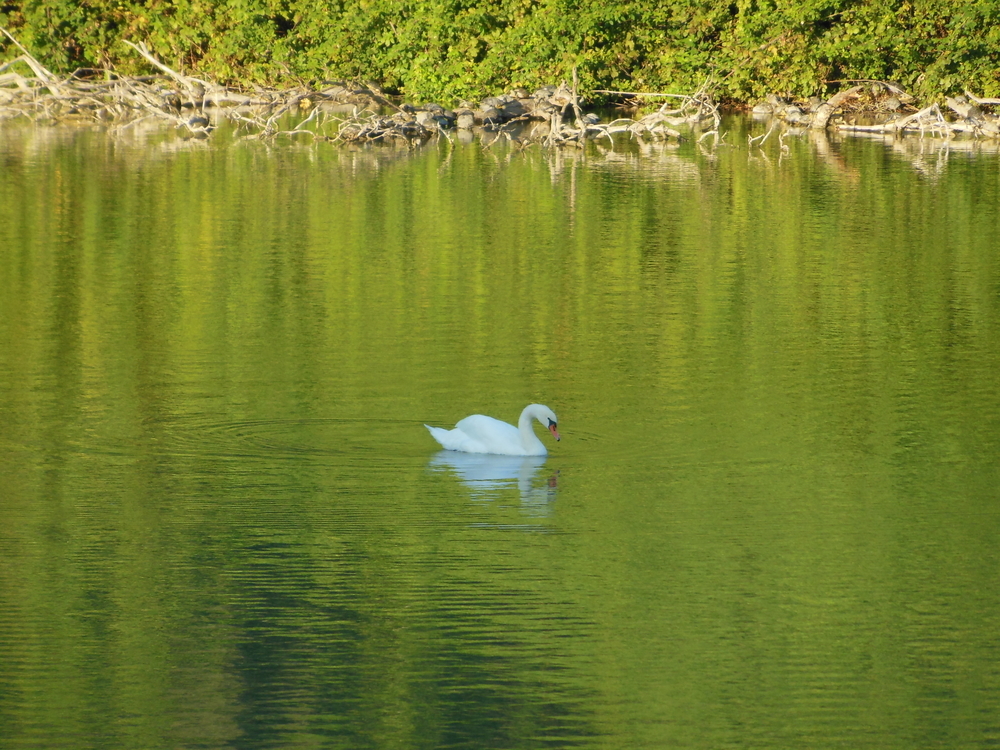 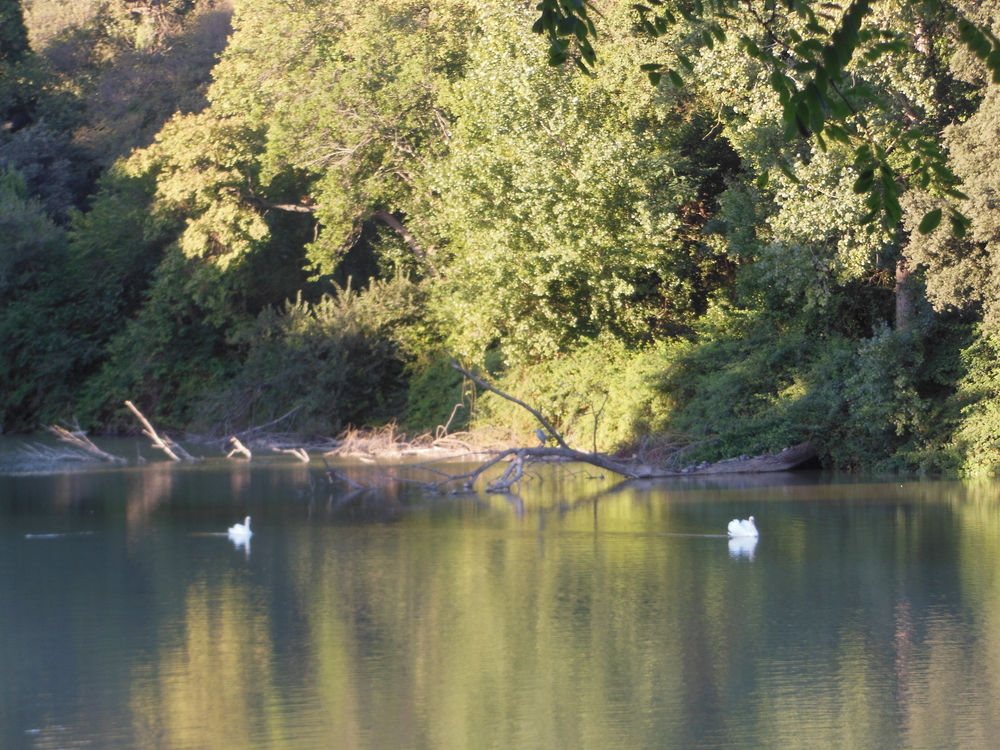 There is a lot of wildlife on the lake – in addition to swans, ducks and geese live here.

Many townspeople come here with children – to admire the park, breathe the fresh air and to feed the geese, ducks and other animals. 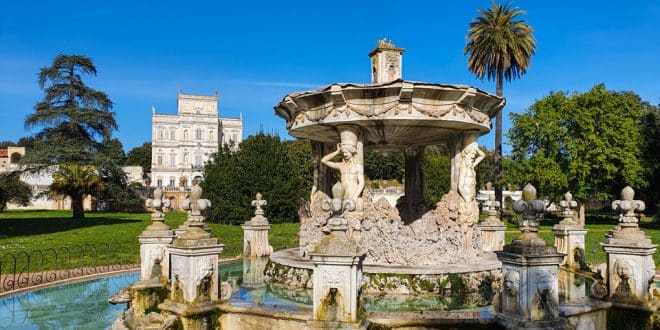 Villa Doria Pamphilj is a seventeenth-century palace and park located on the Gianicolo, 1.5 kilometers south of the Vatican.

The country manor of an ancient family, with its vast green park of 184 ha, the largest in Rome, has been open to the public since 1972 and is a favorite place for tourists and city dwellers for its relaxation and for being close to the history of Italy.

At the beginning of the XVII century there was a modest property with vineyards and a small building called Villa Vecchia.

In 1630 the old estate was bought by Pamphilio Pamphili, a member of a noble Roman family, whose wife Olimpia Maidalchini, known as Pimpaccia, became famous as a very bright and extraordinary personality of the XVII century.

In 1644, their son, Camillo Pamphili, began the construction of a palace on the acquired land, conceived as a luxurious country residence.

Pope Innocentius PP. X of the Pamphili family, wishing to make his family name famous and perpetuate its name, employed a talented sculptor and artist, Alessandro Algardi, to build the palace and park complex. He was not an architect, but his talent and ambition to outshine that of Giovanni Lorenzo Bernini himself were in full force when he participated in the design and creation of the Villa Pamphili.

Algardi invited the painter and architect Giovanni Francesco Grimaldi, as well as Carlo Rainaldi and Francesco Borromini, already famous in Rome for their Baroque works.

Between 1644 and 1653, the central part of the new villa, called Casinodel Bel Respiro (Casinodel Bel Respiro), the main fountains, and the Villa Vecchia were built and restored. A wonderful park, the first landscape designed by Tobia Aldini, gave the villa a special attraction.

After the line of the noble Pamphili family was interrupted in 1760, the vast country estate passed to the Doria family, which led to the double name of the villa.

In 1840 the new owner greatly enlarged the territory of his country residence, taking possession of the small estates with vineyards on Via Aurelia Antica and in 1856 bought the neighboring Villa Corsini.

The last important structure in the park was the chapel, built between 1896 and 1902 on a project of Edoardo Collamarini, which even today remains the property of the Doria-Pamphili family.

Between 1883 and 1971, the palace and park complex was partially sold by the Doria-Pamphili family to the City of Rome, and then expropriated entirely by the Italian government.

Everyone who wants to talk about life in Rome, I invite you to walk around the Villa Pamphili in my company. 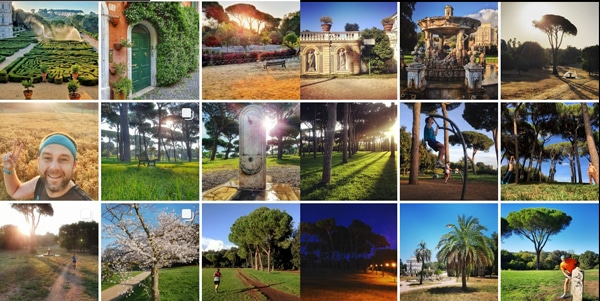 The main building of the Villa Doria Pamphili architectural complex is the Casino del Bel Respiro, whose interior houses a unique family collection consisting of worthy works of art, artifacts (including those found in the villa), furniture, and remarkable frescoes by Giovanna Francesco Grimaldi.

The entrance to the park is the monumental Arco dei Quattro Venti, designed by the Italian architect Andrea Busiri Vici between 1856 and 1859, partly using materials of the Casino of Villa Corsini, demolished in 1849 because of the fighting between French troops and the defenders of the Roman Republic.

Within the park is the Cappella Doria Pamphilj (Chapel of Doria Pamphilj), as well as a number of buildings belonging to the farming industry. 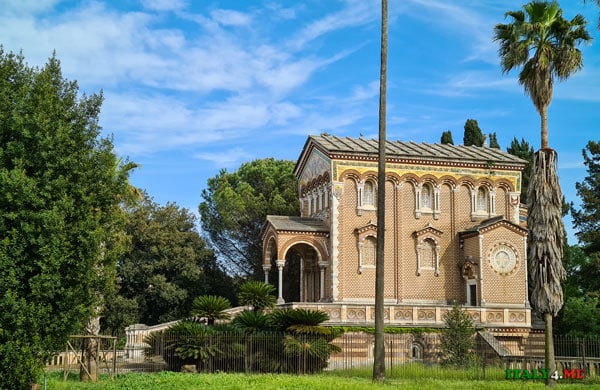 The splendid and very different gardens give a special charm to the ancient villa.

The most beautiful part of the property, the Secret Garden (Giardino Segreto), is situated on the southern side of the Casino del Bel Respiro and its decoration is the boxwood maze with patterns of lilies, which are the heraldic lilies of the Pamphili family. 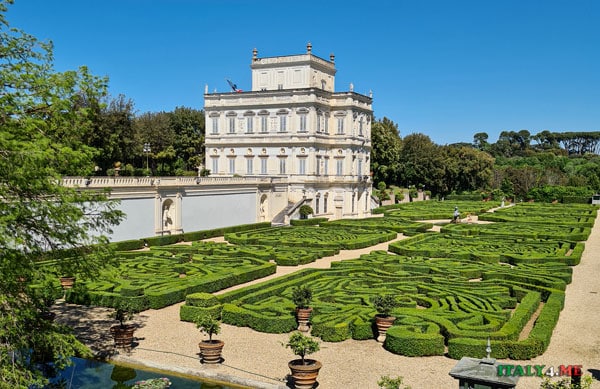 The largest garden, the Valle dei Daini, which formerly belonged to Villa Corsini and which covers about 60 thousand square meters, was originally a vineyard, and in the middle of the 19th century the vast territory was planted with pines, oaks, elms, willows and poplars. The ancient trees remember the times when there were roe deer, deer and pheasants which were brought here especially for the hunting fun of the Roman aristocracy.

No seventeenth-nineteenth-century fashionable garden could do without the splendid fountains of the famous masters. In the Park of Villa Doria Pamphili you can admire the Snail Fountain (Fontana della Lumaca) by Giovanni Lorenzo Bernini and the works of Alessandro Algardi and Giovani Francesco Grimaldi, the Fontana del Tevere 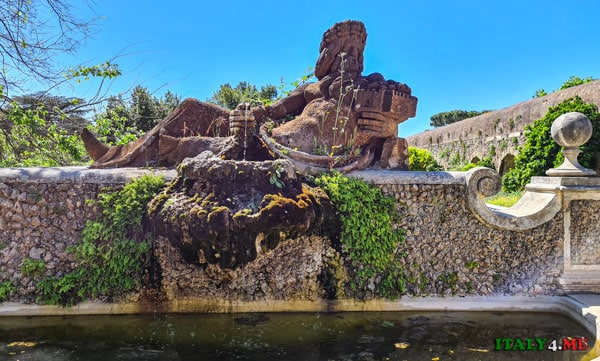 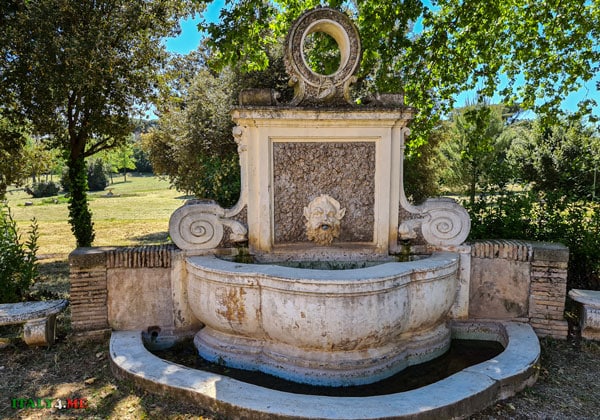 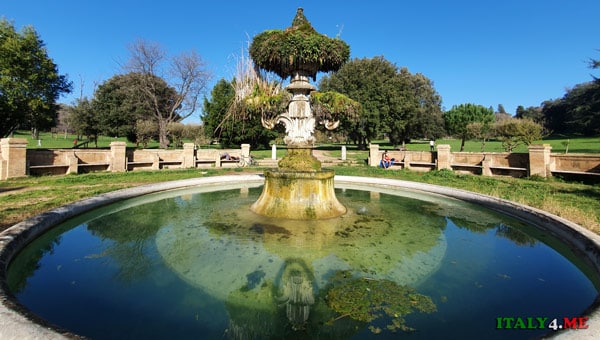 The Fontana della Cascata is an intricate complex of three basins that lead to the Lake of the Lilies. Fish, turtles and swans are found there, which the visitors of the park like to feed.

The Fontana del Cupido, built in 1855 by Andrea Busiri Vici, is a monumental and interesting fountain. 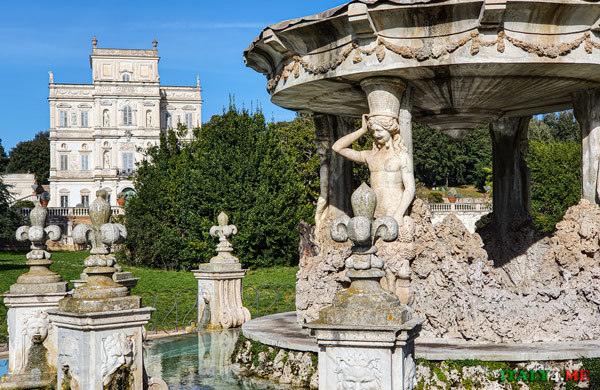 The winged cupid after which the sculpture is named was stolen soon after Villa Doria Pamphili was opened to the public. Now only the feet of the statue remain on the pedestal that crowns the balustrade. The composition of the fountain is a large round bowl with an imposing base, which is supported by four pillars supported by figures of fauns – men and women.

Villa Doria Pamphili, with its pine forest, gardens, pond and fountains, is an amazing place of solitude and enjoyment of nature in the features of the big city. You can spend a whole day here and combine ancient sightseeing with wonderful relaxation.

How to get there and opening hours

Villa Pamphili is open daily from 07:00 until sunset.

The nearest entrance to the city center is in Largo III Giugno, 1849, which is the intersection of Via di S. Pancrazio and Via Aurelia Antica. The point of entry is marked in our guidebook to Rome, the map is available without Internet connection. From Fontana dell’Acqua Paola you can get on foot in 7 minutes.

Keep in mind that the villa is huge and you can easily spend a whole day there. In the supermarket, buy some cheese, prosciutto, and wine and have a picnic under the pine trees.