Villa Necchi Campiglio: an oasis in the city center and the most photogenic location in Milan

Many are familiar with Villa Necchi Campiglio from the film “I am love” directed by Luca Guadagnino (and now also from Ridley Scott’s “House of Gucci”), and some consider it the ideal place to take a break from the frenetic pace of the city. The villa is an architectural masterpiece by Piero Portaluppi, tucked away in a lush green garden in the middle of Milan. Here’s why it has become a magnet for residents and visitors to Italy’s business center.

Villa Necchi Campiglio is an iconic site in Milan despite its almost secret location, in a secluded corner of Via Mozart and hidden by the lush greenery of the surrounding park. The villa appeared on the city map in 1935, and its author was the architect and spokesman for Italian rationalism Piero Portaluppi. After the death of the Villa’s last owner in 2001, the building was taken over by the Fondo Ambiente Italiano (FAI), an organization dedicated to preserving and protecting Italy’s cultural heritage. Soon afterwards the villa became open to the public and now anyone can immerse themselves in the atmosphere of Italy at the beginning of the last century. 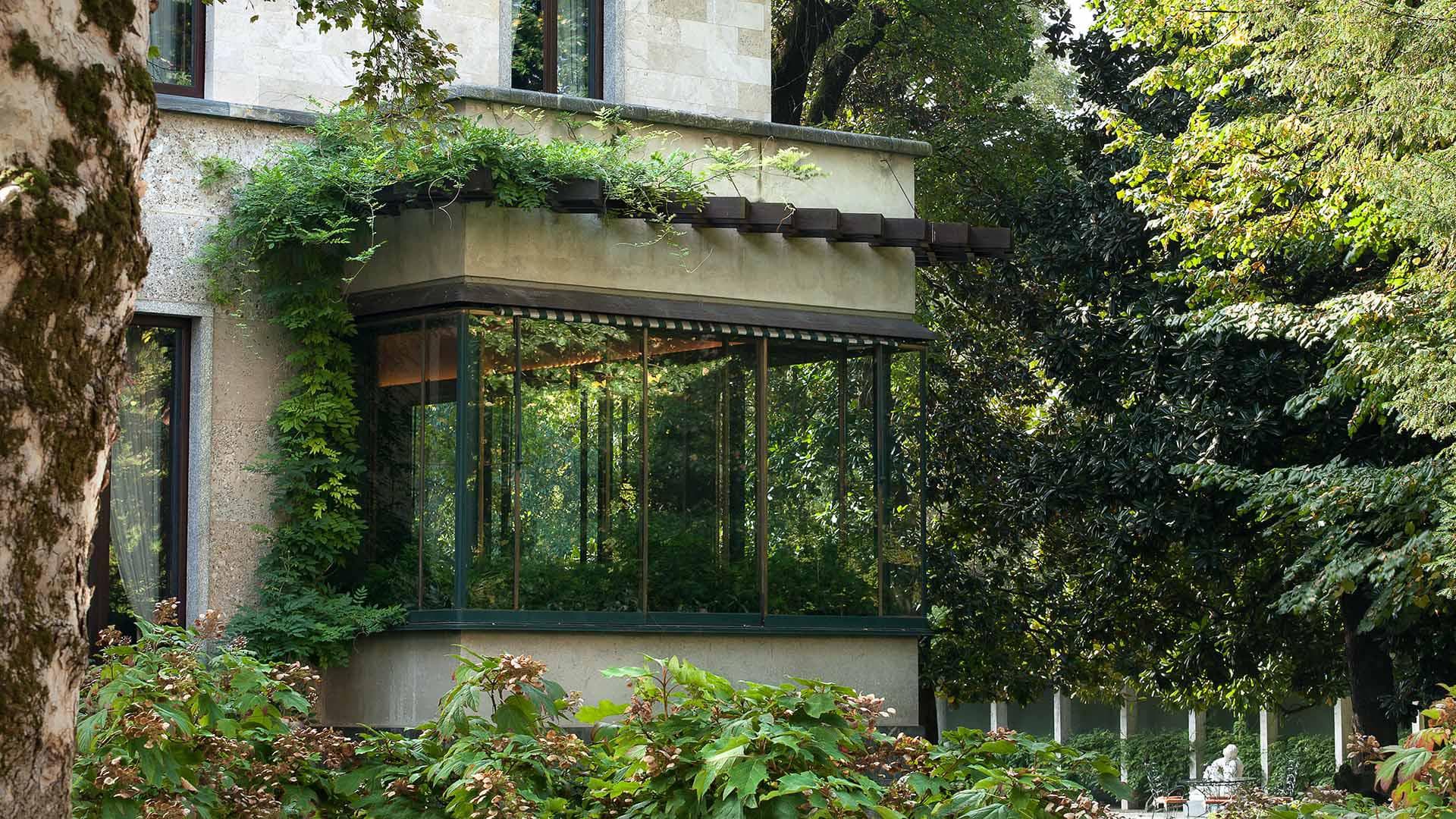 The idea to build a Villa in country style in the middle of Milan belongs to the Necchi-Campiglio family from Pavia – Angelo Campiglio, an industrial worker and owner of an ironworks company, his wife Gigina Necchi, and her sister Nedda Necchi found a vacant plot, which was at the time on the outskirts of town and was not yet affected by the construction boom. The family hired Piero Portaluppi, one of the most fashionable architects of his time, distinguished by his bold and futuristic ideas. In Milan, he was already known for the Casa degli Atellani and the Planetarium building.

Piero Portaluppi’s project was years ahead of the style of bourgeois architecture in Italy. His pioneering ideas brought cutting-edge technology to the Villa – modern industrial materials, electricity and a heated swimming pool – as well as signature visual details such as geometric patterns, a zodiacal ceiling, Arabescato marble trim and a star-shaped window. Villa Necchi Campiglio departed from the canonical forms of Milanese luxury, but at the same time conformed to the trends of the XIII-XIX centuries. 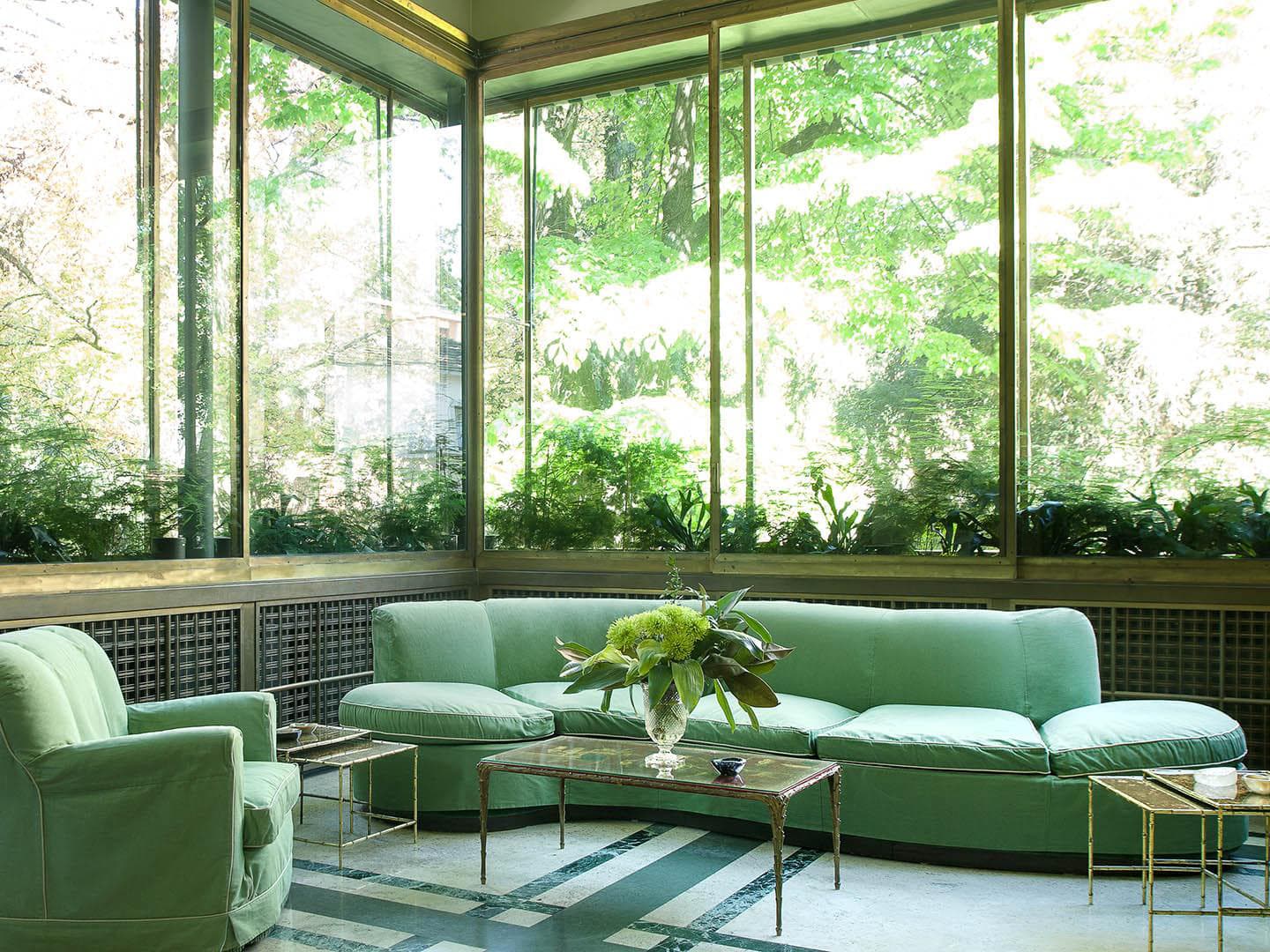 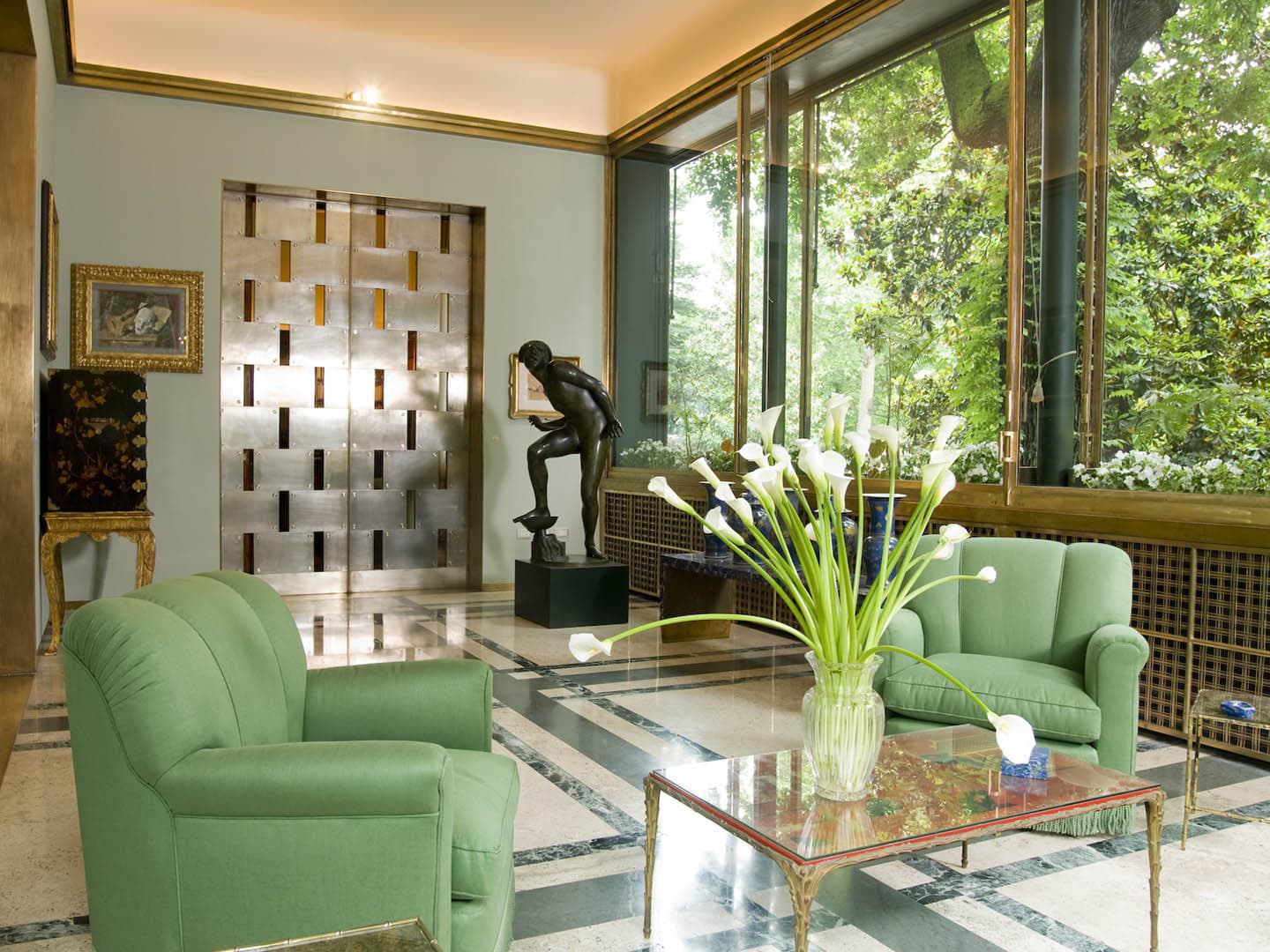 The most eye-catching space of the Villa was the veranda, made in the form of a green terrace with panoramic windows. Portaluppi conceived the space of the Villa as an integral work of art, having thought out even the smallest details of the interior, right down to the tea service. 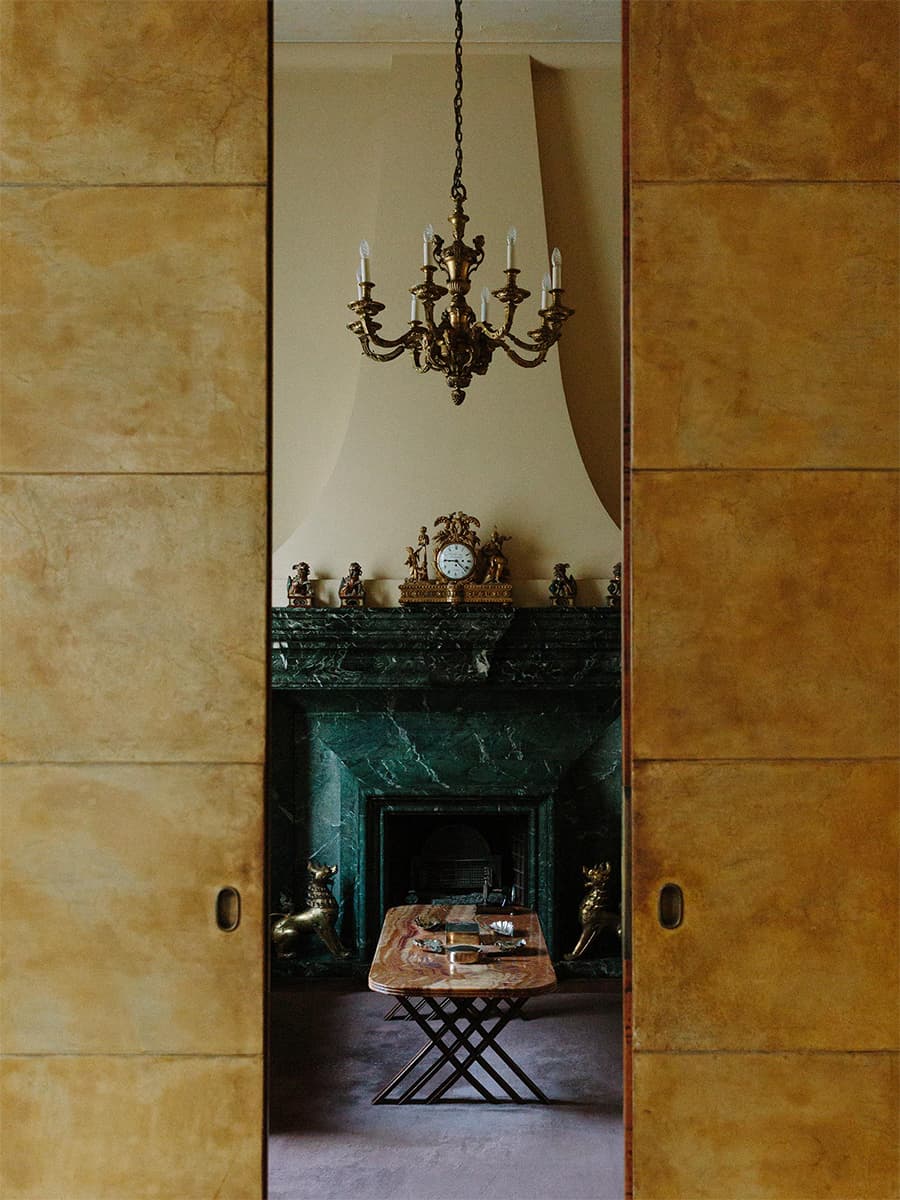 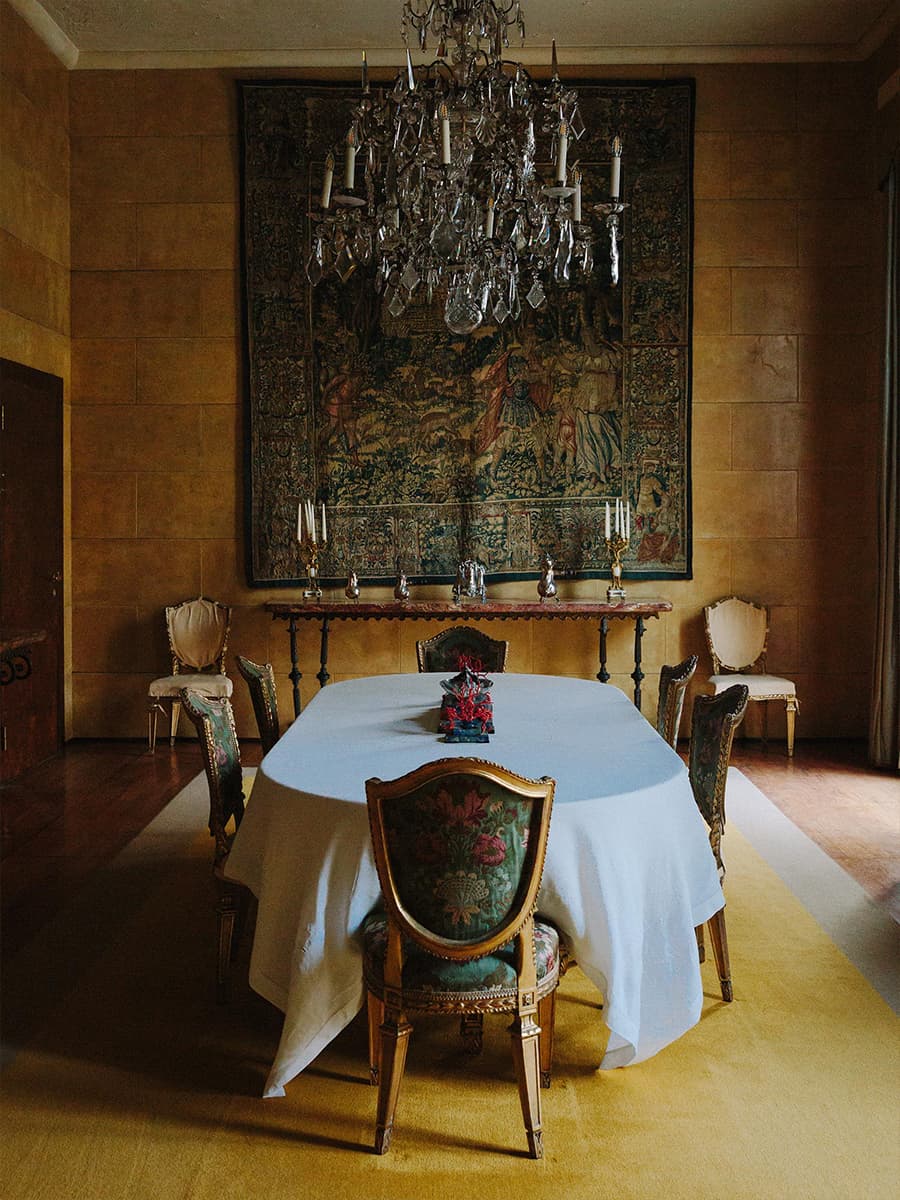 In 1938, a few years after the completion of the initial design and after the Second World War, the owners of the villa commissioned another architect, this time a leading representative of neotraditionalism and a favorite of the Milanese bourgeoisie, Tommaso Buzzi, to modify the internal layout of the building. He redesigned the fireplace into a more classical version of it, added tapestries to the walls and furnished the living rooms with new furniture, thereby mixing two conflicting styles and giving the space its now recognizable hybrid aesthetic. 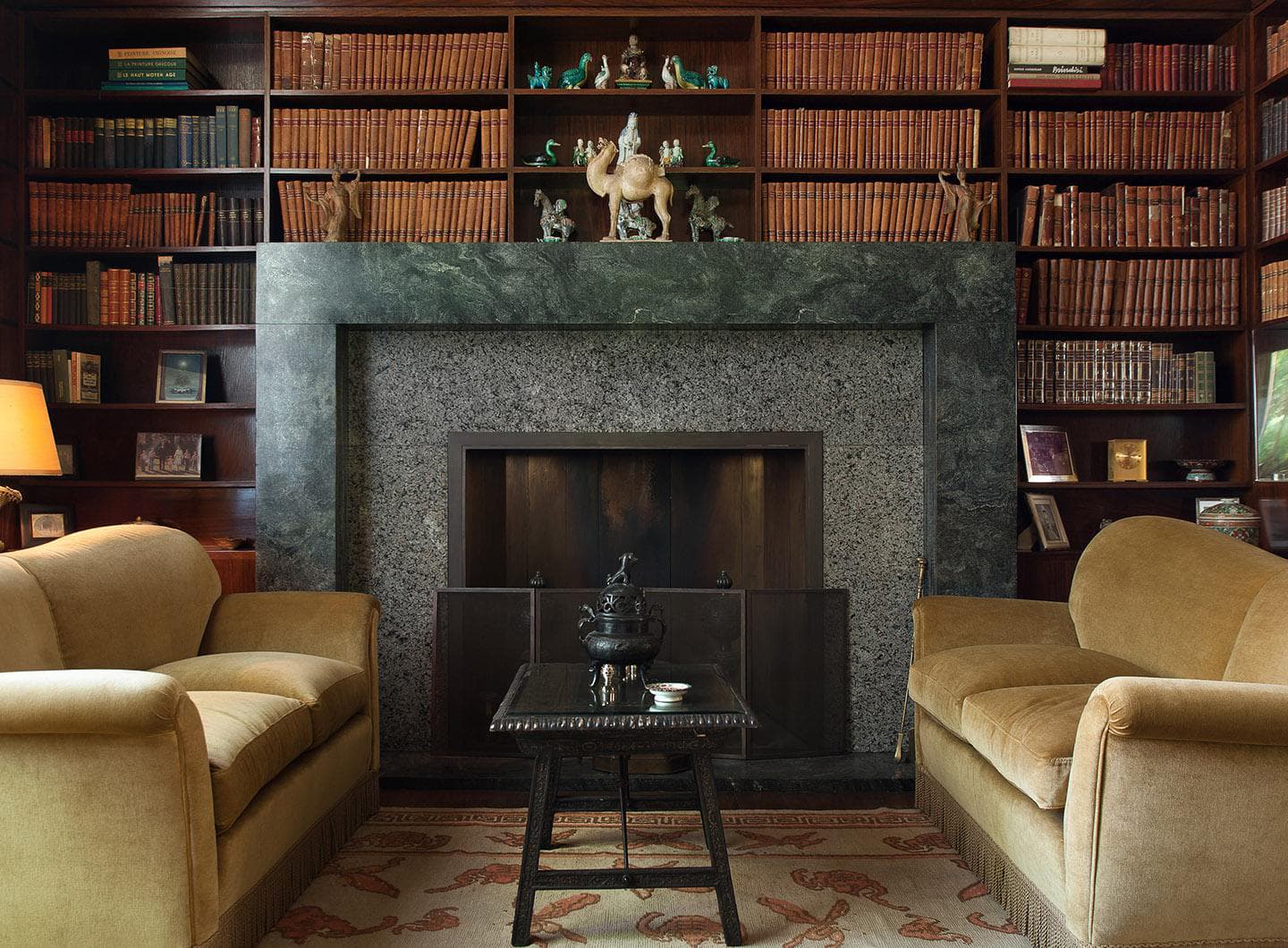 Especially for the Villa, the FAI donated several art collections – the Collezione de’ Micheli, the Collezione Guido Sforni and the Raccolta Claudia Gian Ferrari – that have turned the building into a multilevel museum. The works of art, however, do not disturb the architectural intent of Portaluppi and the relaxed ambience that was originally incorporated into the concept of the Villa. 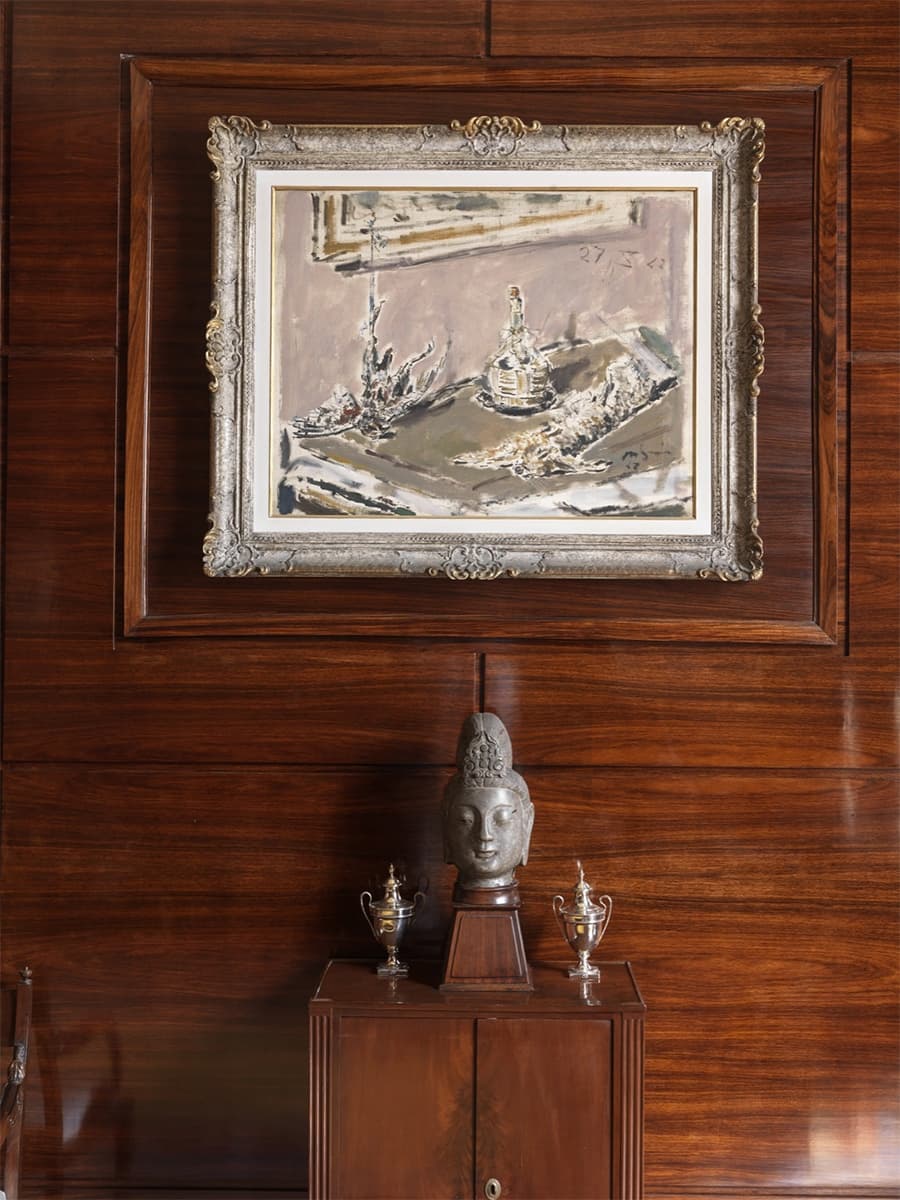 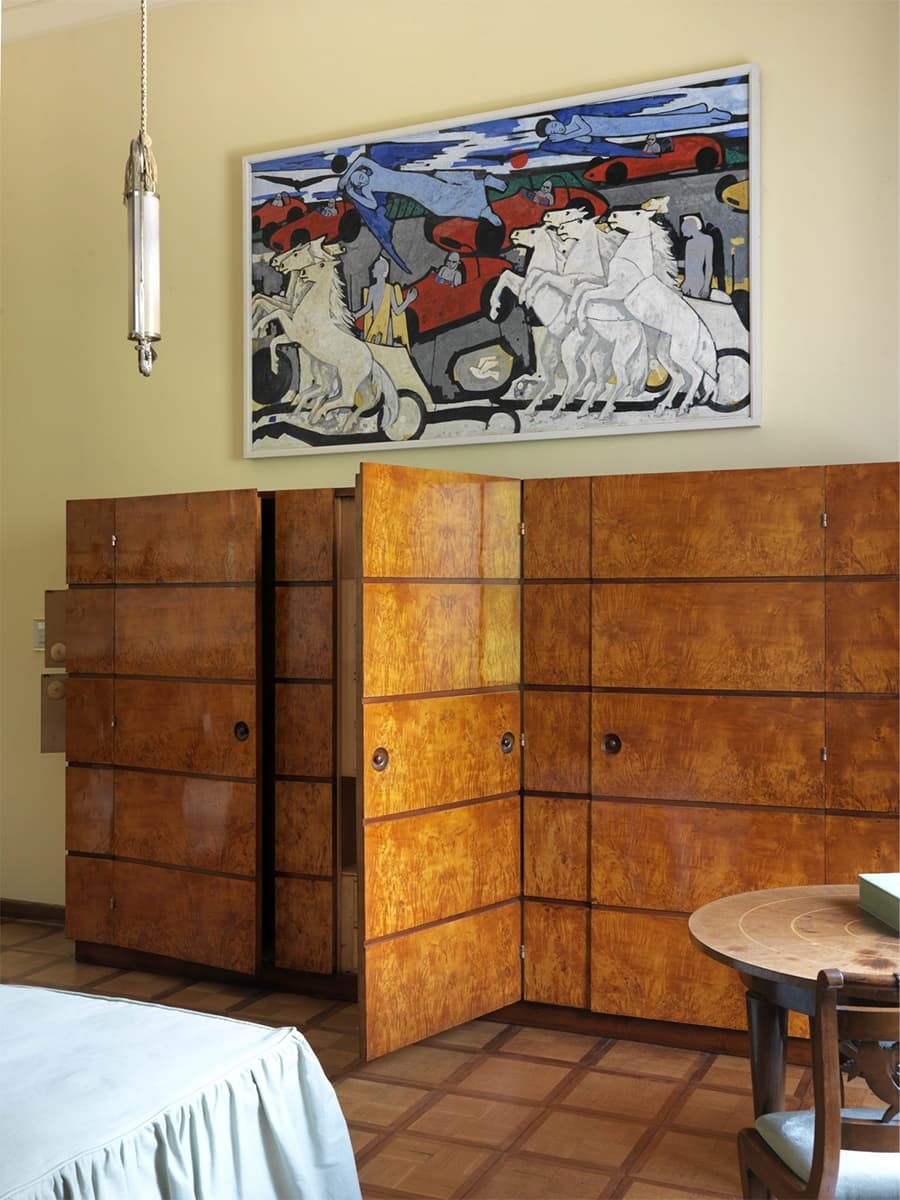 The De Micheli Collection is decorated in a 13th-century living room, dominated by works by Venetian artists Canaletto, Gianantonio Guardi and Rosalba Carriera. The Guido Sforni collection is located between the bathroom and the guest bedroom and consists of drawings by Pablo Picasso, Mario Cironi, Amedeo Modigliani and other artists. The most outstanding collection to be seen at Villa Necchi Campiglio is the Claudia Gian Ferrari Collection with large-scale paintings by Mario Cironi, Arturo Martini, Giorgio de Chirico, Filippo de Pisisa and Felice Casarati.

Nowadays, Villa Necchi Campiglio attracts both architecture lovers who are impressed by the work of Piero Portaluppi and tourists who want to see the works of the great Italian masters, as well as residents of the city. In the garden surrounding the Villa, you can get away from bustling Milan and enjoy a cup of coffee by the pool, feeling like you’re in the countryside – just as the original owners of the house intended almost a century ago.

Villa Necchi Campiglio is an exquisite example of the style fashionable in Milan and Italy in the 1930s, marking the beginning of rationalism in modern architecture. Its glamorous interiors retain the decor and furnishings chosen by the home’s owners. The interior space characterizes the notion of comfort and elegance of the industrial bourgeoisie stratum of Lombardy between the two world wars.

In addition to the living rooms, the villa has a magnificent winter garden with exotic plants, a living room, a projection room, a smoking room, a game room and a gym. The building is equipped with intercoms and elevators, including a kitchen elevator, heavy sliding doors in the openings, the yard has a tennis court and Milan’s first private heated pool.

Set in an enchanting garden in a quiet neighborhood in Milan, the house is characterized by large linear volumes and Art Deco elements in the interior spaces. The first floor, with a superb veranda, once served as a prestigious guest area, the upper level was used for the bedrooms of the owners and guests and the basement for the kitchen and outbuildings. The owners, who loved to spend their free time in the company of like-minded people and friends, equipped a screening room and exercise room, unconventional for private homes of those years. The presence of ultramodern for the 1930s luxury made the villa one of the symbolic residences of the time. 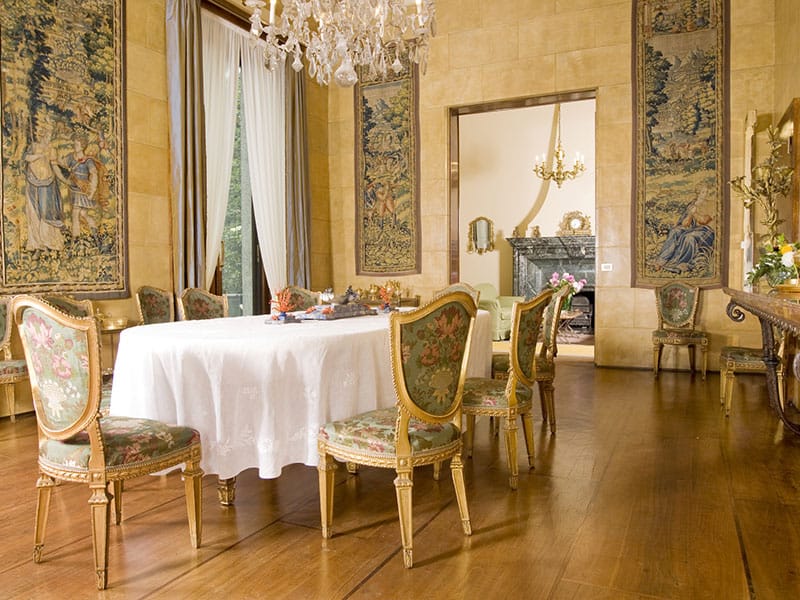 At the end of the nineteenth century, the Milan area was occupied by private gardens and orchards, but even before the beginning of the next century, the Institute for the Blind appeared here, and urban streets began to be laid out. Since 1926, plots began to be built up in accordance with the developed master plan. The land for the villa was bought by Angelo Campiglio around 1930, and the building was built in 1932-35, designed by Italian architect Piero Portaluppi. The interiors were decorated by Tomaso Buzzi.

The Necchi Campiglio family was representative of the cultural Lombard industrial bourgeoisie. Angelo (1891-1984), until the end of the 1960s, was engaged in the production of enameled iron and sewing machines of the famous brand Necchi. Joining him in the villa were Gigin’s wife Necchi Campillo (1901-2001) and her sister Nedda Necchi (1900-93).

At one time the villa was visited by Prince Henry of Hesse Heinrich of Kassel, after whom the room where he lived was named Camera del principe. There was also the Camera della principessa, where the princess of the house of Savoy, Maria Gabriella, middle daughter of the last king of Italy, Umberto II, stayed. She visited her best friends, the Necca sisters, more than once.

During World War II, the family moved to Villa Barasso (Province of Varese) and their Milanese house was requisitioned and turned into the residence of Alessandro Pavolini, a member of the fascist government. It was later occupied by the Americans, and then it became the seat of the Dutch consul’s office. The rightful owners managed to regain their property a few years later.

One of the premises of the villa © Palickap / wikimedia.org

Shortly after Angelo’s death, the sisters, who had no children of their own, drew up a will for Villa Necchi Campiglio in favor of the FAI Italian Foundation for the Protection of Art and Natural Heritage. The organization took possession in 2001 and, after restoring the building, opened the House Museum to the public in 2008.

The property has a cafeteria and a store with a line of FAI brand products. Here you can buy food, souvenirs, books, accessories, household goods, stationery, etc.

Villa Necchi Campiglio has been called the keeper of sensational masterpieces of art and the untouched atmosphere of the beautiful world of 1930’s Milan. An oasis of art, architecture, greenery and silence it is one of the most popular house-museums in Milan, where everyone can feel like a guest of an inhabited noble residence. The house-museum houses outstanding masterpieces of art, such as works by Sironi, Martini and de Chirico, donated to the FAI by Claudia Gian Ferrari in 1995, and Canaletto, Rosalba Carriera and Tiepolo, donated by Alighiero and Emilietta de Micheli in 2009. In November 2017, the villa was enriched by the Guido Sforni collection of 21 works of great twentieth-century artists such as Picasso, Fontana, Modigliani, Henri Matisse and others.

In the villa you can see furniture and Brussels tapestries of the 16th and 17th centuries, a large Renaissance-style fireplace, stucco ceilings, a staircase with a double Greek balustrade. There are valuable objects, the owners’ rifles, sculptures, etc. on display.