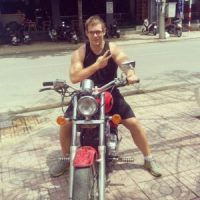 One of the most important attractions in the city is the Vinpearl Amusement Park (Vinpearl Land). It is located on a separate picturesque island with a water park, villas for guests, 5-star Vinpearl Resort hotels, attractions, restaurants – in general, absolutely everything you need for a good holiday for both adults and companies with children.

General information about the park

Fun fact: The island was originally named Hon Che (which means Bamboo), but after the construction of the Vinpearl Land Amusement Park and the large “HollyWood” inscription on the side of the mountain, the name Vinpearl stuck with the island. 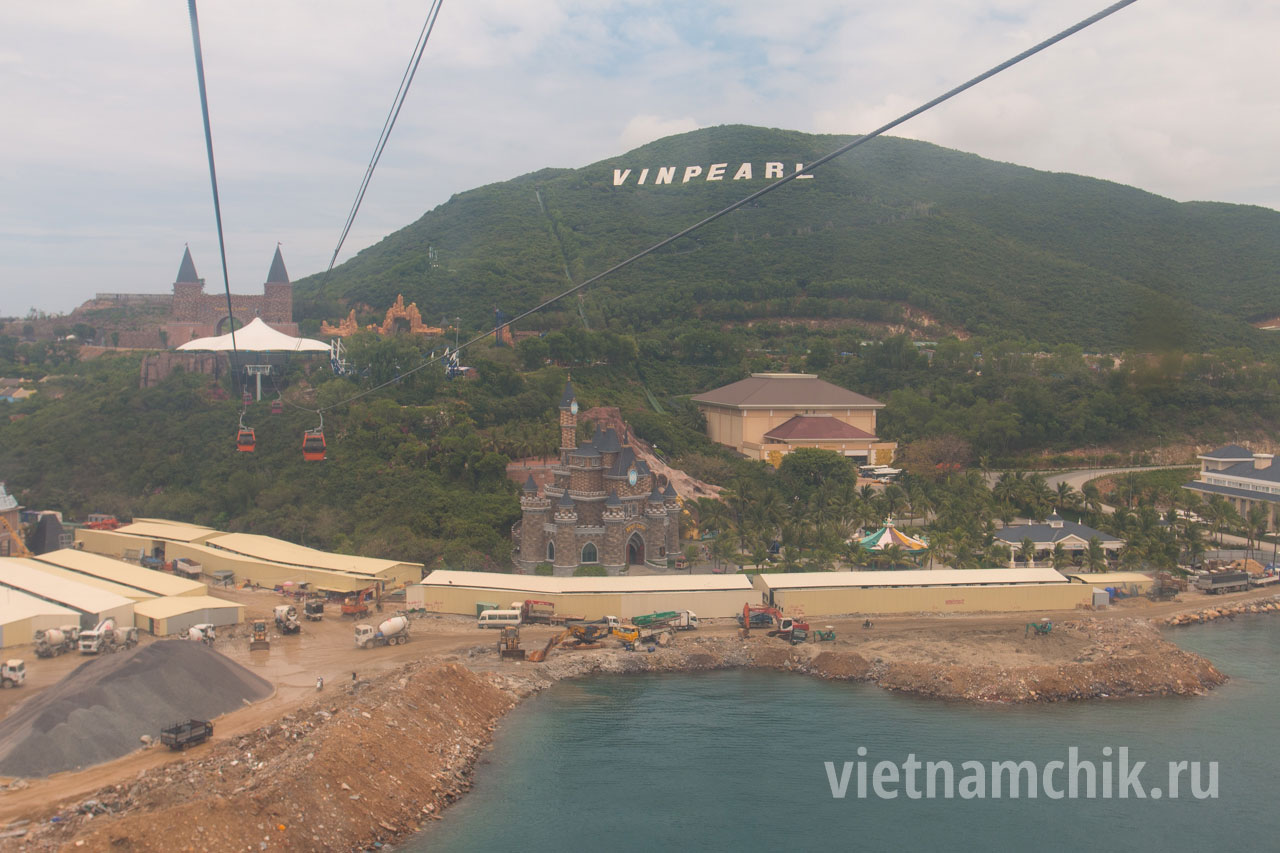 How do I get to Vinpearl Park?

There are only two ways to get to entertainment island: by sea (ferry, boat and special canoe-taxi) or by the longest cable car in the world, which is already a sight in itself. We strongly recommend taking the cable car. It operates daily from 8:00 am to 10:00 pm. During the ride you will enjoy gorgeous views, so do not forget to take beautiful pictures. 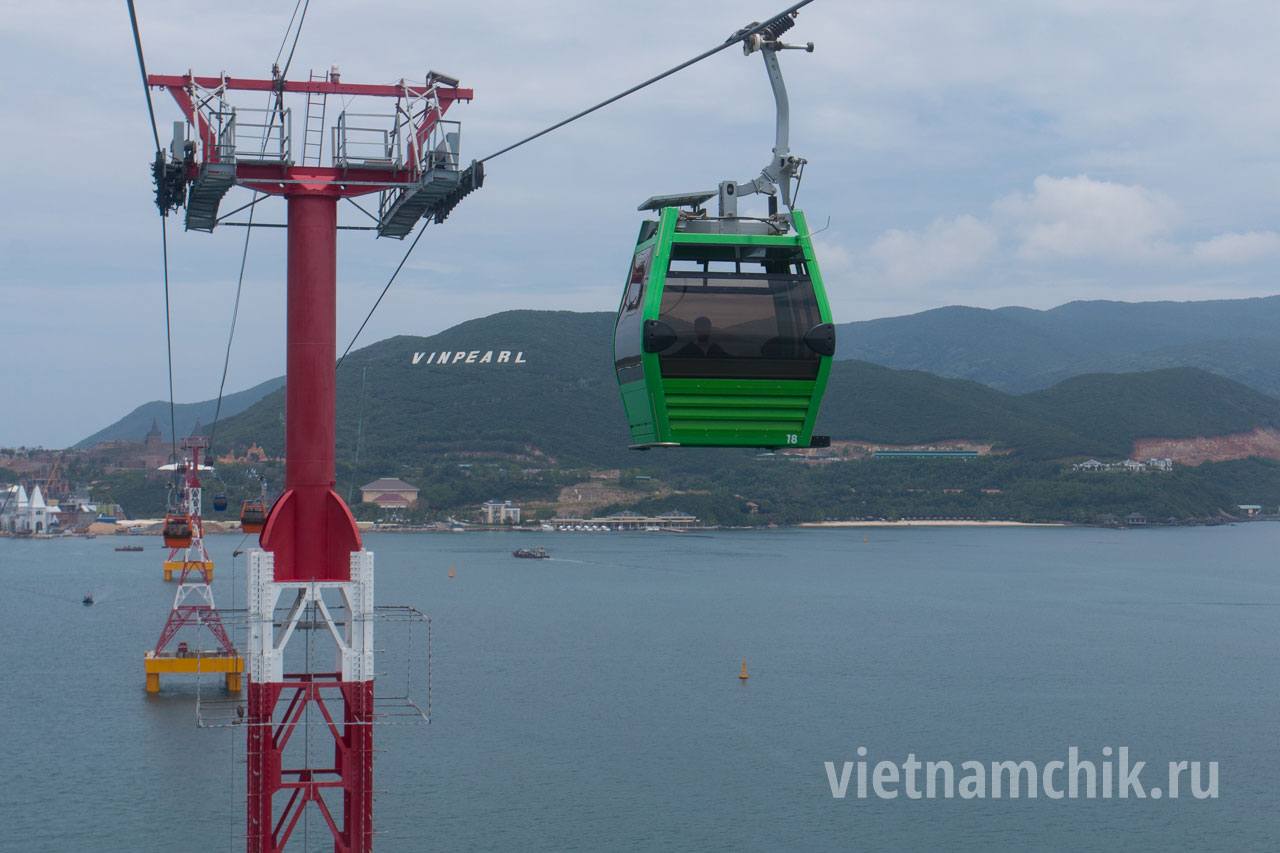 Fun fact: The Windsorl aerial tramway is 3320 meters long, which is a record for a cable car over the sea. The ride takes only 12 minutes. It has a capacity of 1,500 people per hour. Its construction was finished in 2007, and the Guinness Book of Records included the construction in its list of wonders.

You can get to the place of departure of the cable car by bus number 4, which runs on line 3 in the tourist quarter. The final stop is the entrance to the cable car. The ticket costs 7,000 dong (30 cents). At the end of the way the bus stops next to the entrance ticket outlet, here you can buy them for the same money, but without queuing.

Another popular form of transportation is still a motorcycle. After all, it is only on it, and even a cab, you can go back after the evening walks. No need to worry about parking – there is a large parking lot, the cost of 2000 dong (about 10 cents). To rent a bike, check out our article: “How to Rent a Bike, Scooter, Moped in Nha Trang”.

The cost of tickets to Wynperl Park

Tickets are issued in the form of plastic cards. Showing them at the entrance, you can use all the park attractions for free an unlimited number of times during the day. You do have to pay for food in the restaurants, but the prices are reasonable (about $5 per meal). Ticket prices depend on the height of the visitor. You can purchase them directly before entering the park or in advance at any hotel from your guide.

* Note. Can only be used once. Expires after 90 days from ticket issue date. 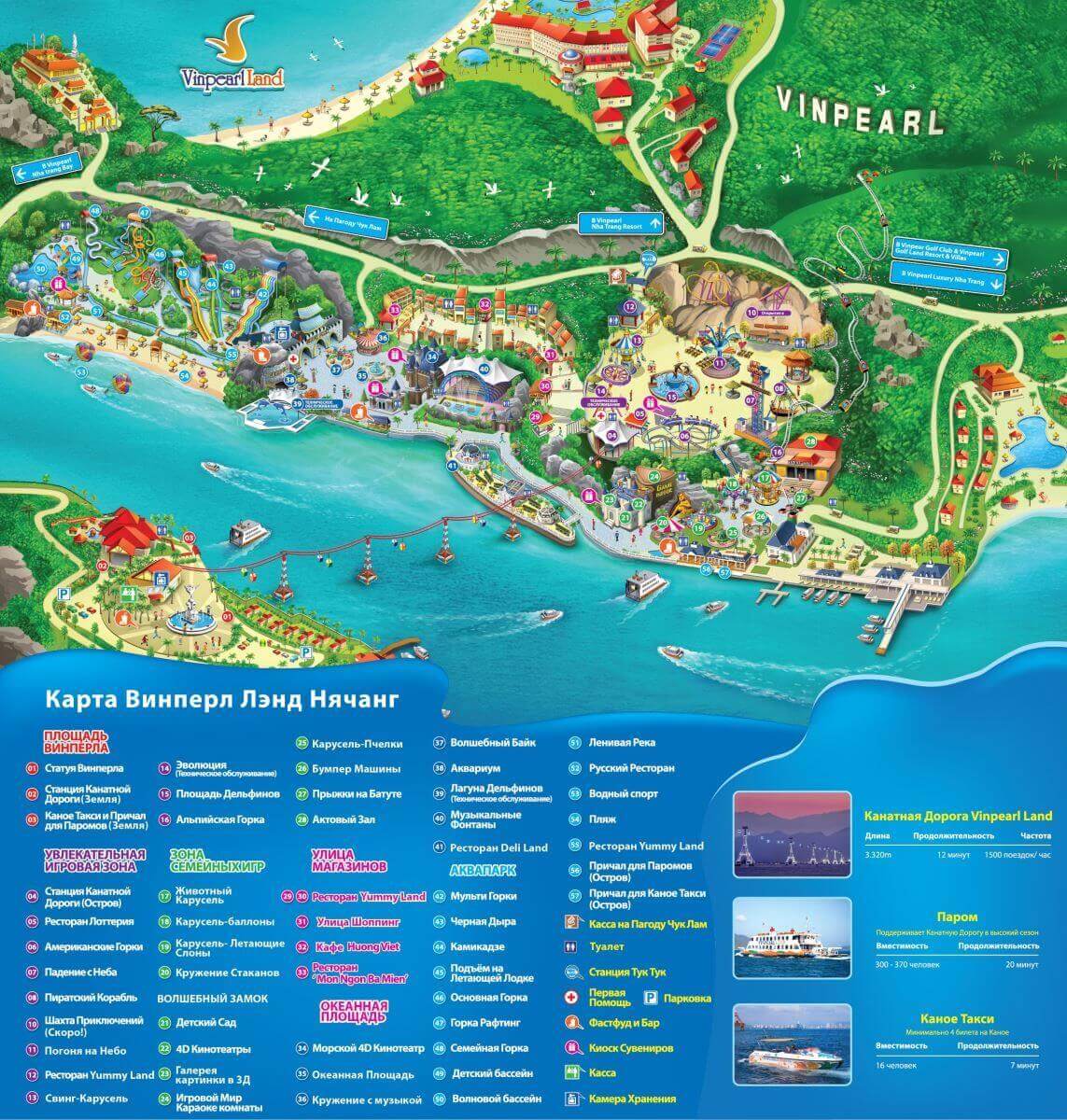 The park is divided into several themed areas: water park, oceanarium, indoor playground, shopping street, carousel and swings, family play area. At the entrance to the park are stands with brochures, they are marked all the important places. We present an online map in Russian and English.

For clarity we recommend to watch the 3 minute advertising clip: 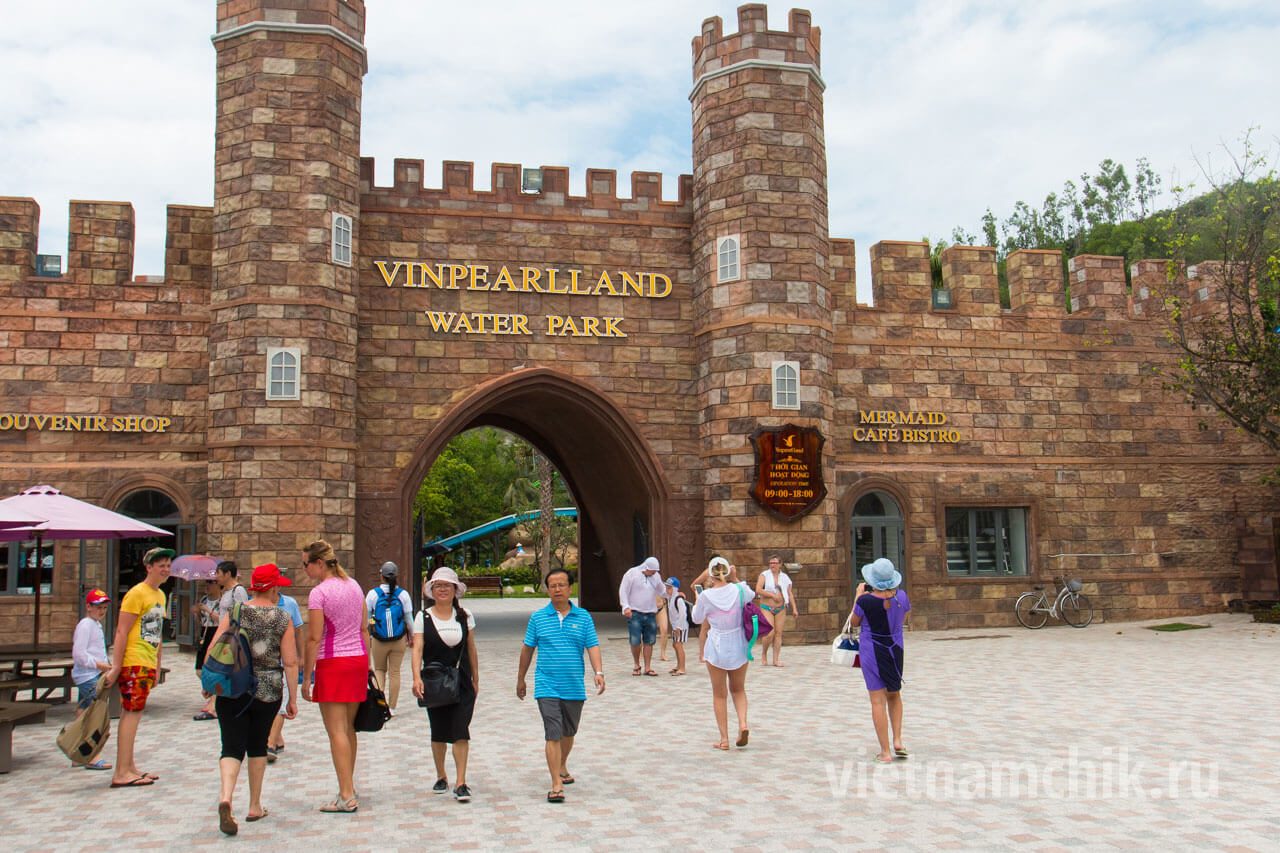 A must-see for every tourist: 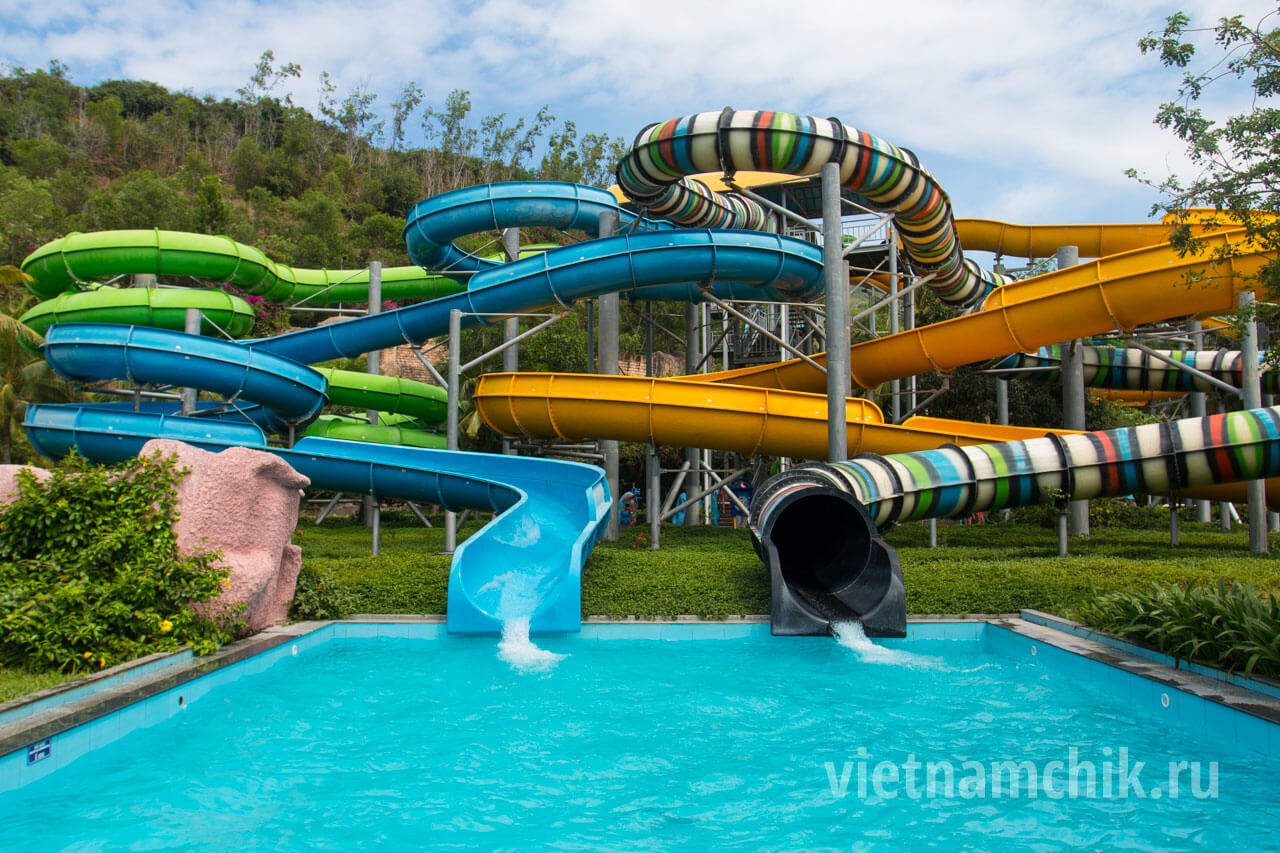 The water park is divided into three zones: slides, family zone and children’s zone. For children there is a pool with shallow depth, near which there are sun beds for parents – very comfortable to half-lay down to drink a cool cocktail and watch your children.

Lovers of passive recreation will like the beach with snow-white sand, which is brought here specially from the continent. It’s nice to walk barefoot here and see the sunset. 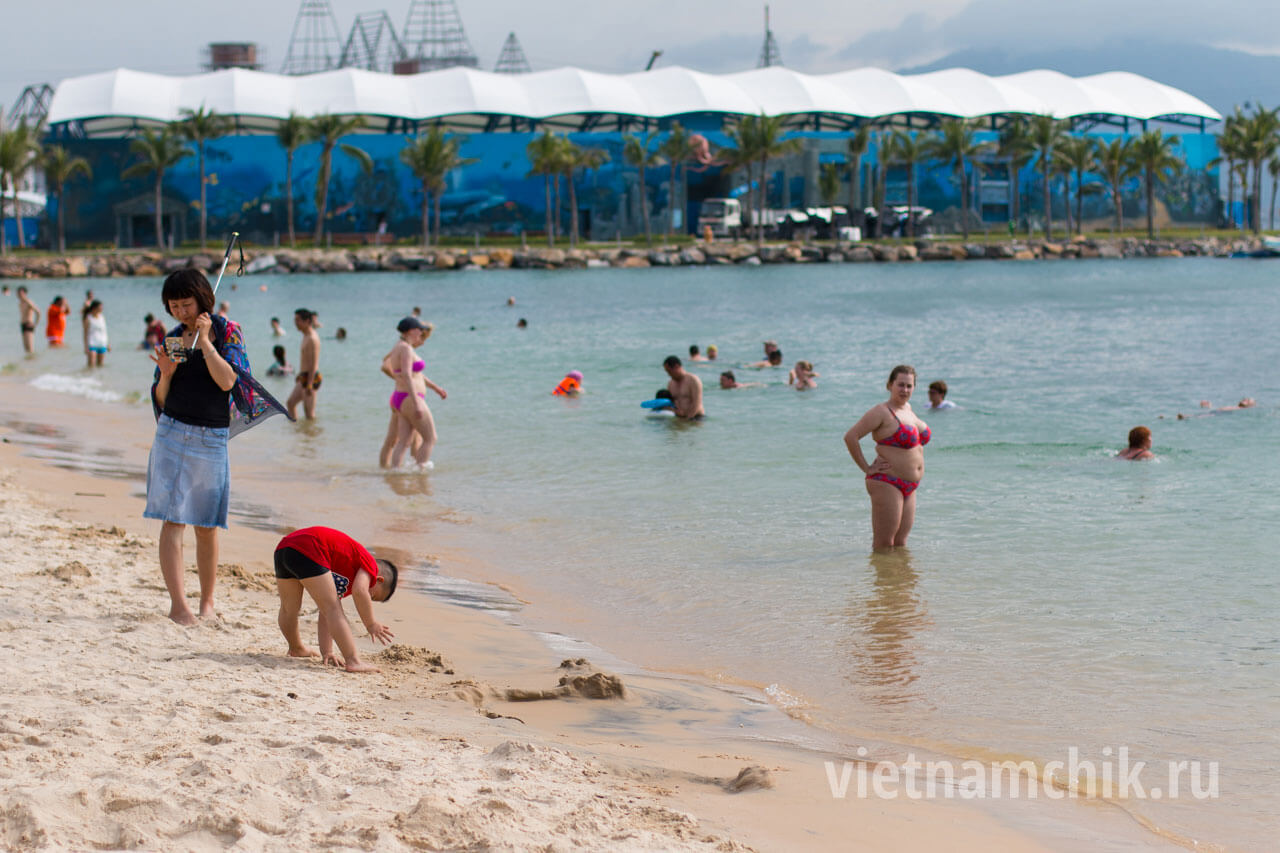 Another popular passive entertainment – rafting on inflatable circles on the artificial river, flowing throughout the water park. The slow current will not strain you – you can relax and just rock on the waves.

On the territory of the water park are artificial figures of animals, they love kids and can spend, for example, near the hippo good half an hour.

Fans of extreme will love the steep slides. At number 42 on the map are six multi-colored hills 100 meters long. With a cheerful company here you can have a real race on the downhill. 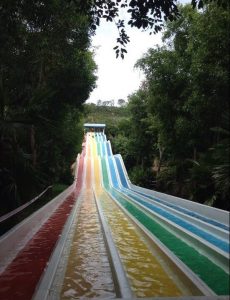 On another hill called “Kamikaze” you can speed up to 60 km / h, while changing the direction of motion from left to right and vice versa. Adrenaline fans should definitely visit it.

On the island of Wynperl is a huge aquarium with hundreds of sea creatures. Bright fish, huge lobsters, bizarre corals, baby sharks, a long glass tunnel – all this awaits you when you visit the aquarium. The area is divided into several sections, depending on the climatic zones of the fish. Every few hours a scuba diver with food appears in the water and gives the public an unforgettable show. 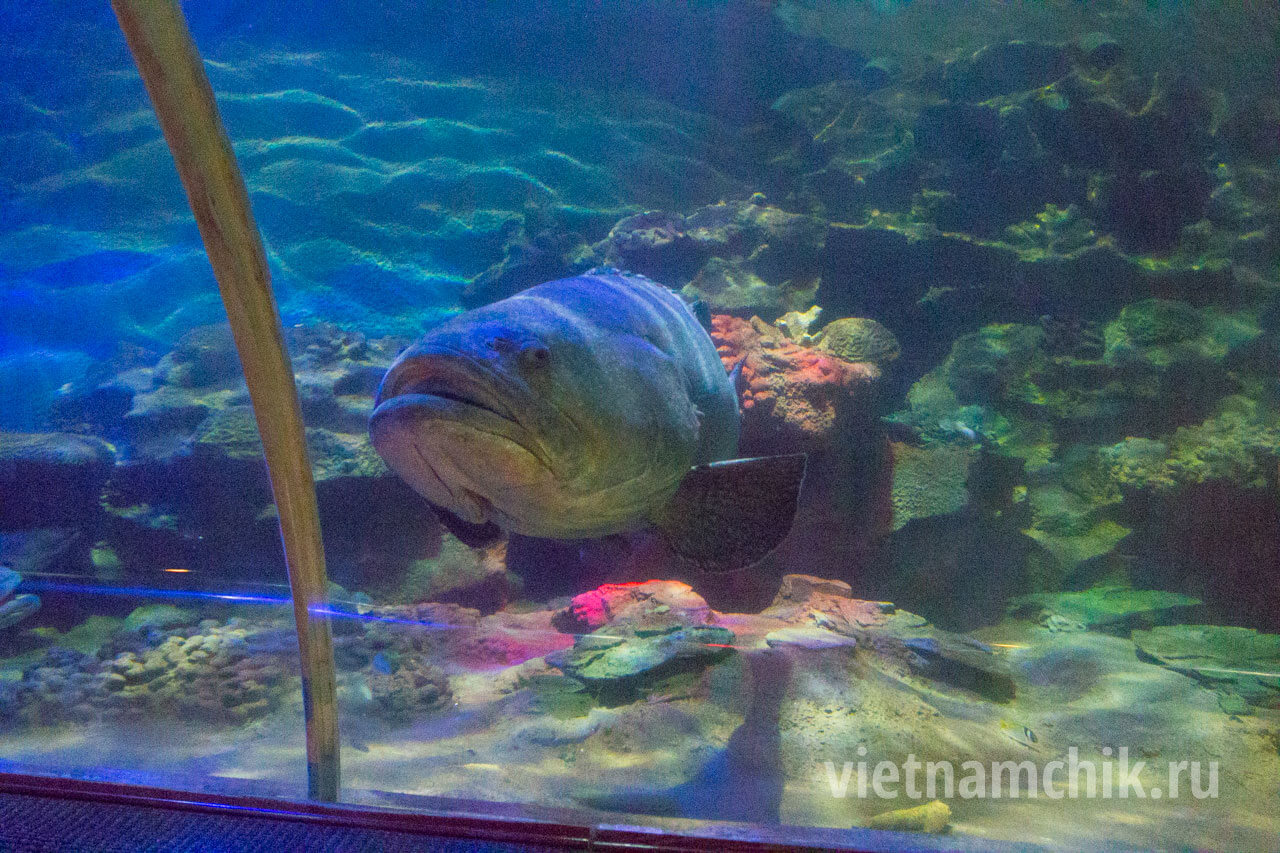 In addition to the water park, outdoor activities and indoor games, Vinpearl is famous for its sophisticated and modern shows that only the largest parks in the world put on.

Dolphin Square and Ocean Square are home to street magic and stilt shows. All shows are on schedule.

Special mention should be made of the water music stage with a capacity of 5,000 seats for world-class events. For example, Miss Vietnam 2006, Miss Charm of Vietnam 16, Miss World 2010, etc. beauty contests were held here.

In addition to the numerous slides, pools, and aquarium, the amusement park has a large number of rides: roller coaster, merry-go-round, Ferris wheel.

Be sure to try a ride on an electric sled . Special sledges for two people go up the slope and then gravity takes them down the winding track. The seats in the sled are arranged one after the other, with the rear passenger in charge – he has a lever for braking the sled. 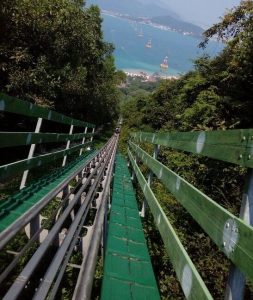 You can find arcade rooms in the buildings of Vinpearl Park. There are children’s and adult versions of the games. Nearby is the 4D movie theater – here when you watch videos, the “real” wind will blow on you, raindrops will spill, the temperature will drop and everything will shake like an earthquake. 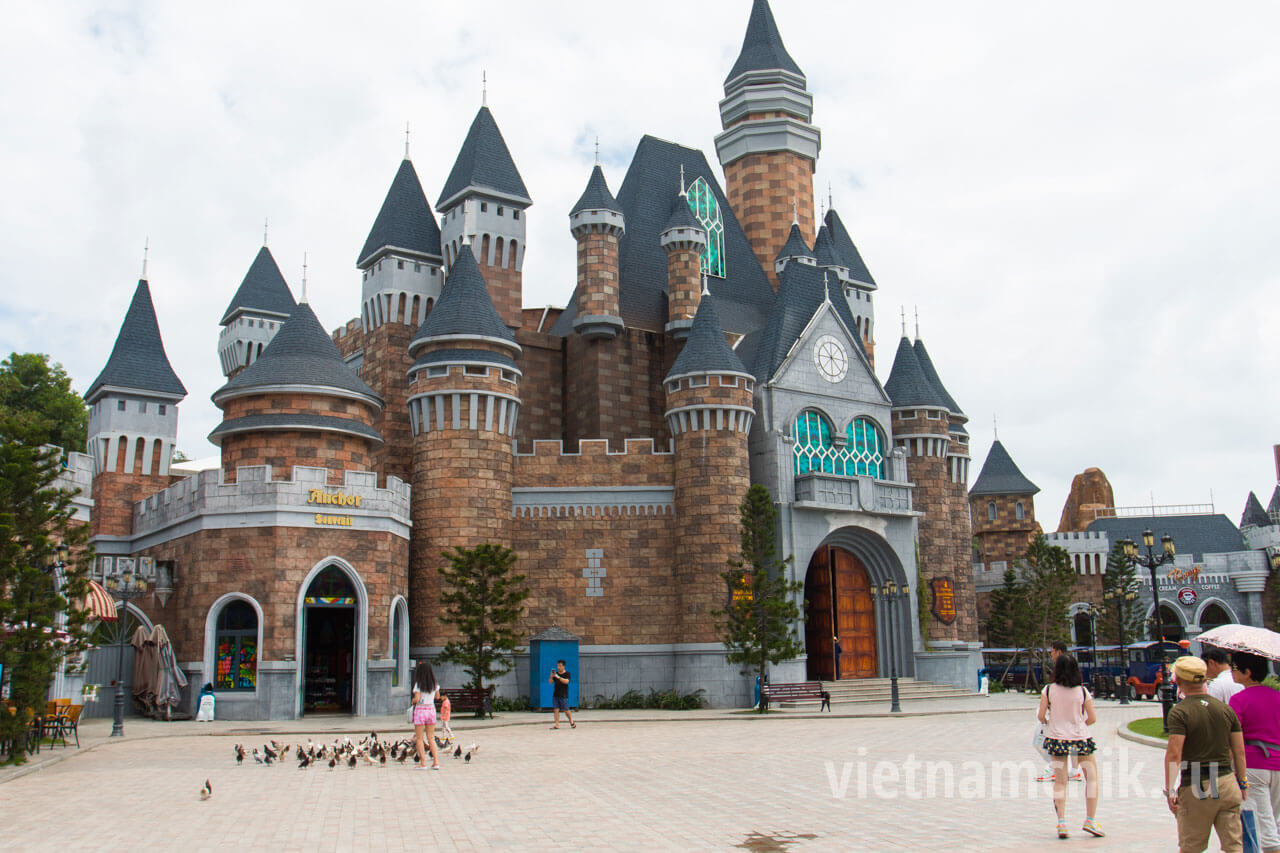 There is a baby room in the building. Here you can tuck your child in for a nap or leave them in the play area under the supervision of professional park staff.

If the purpose of your trip to Vietnam is to visit the amusement park, you can settle in a hotel right on the island. Their ratings are excellent, most have 5 stars, and prices start at $ 130 per day. The main advantage of staying in them is free access to the park at any time. 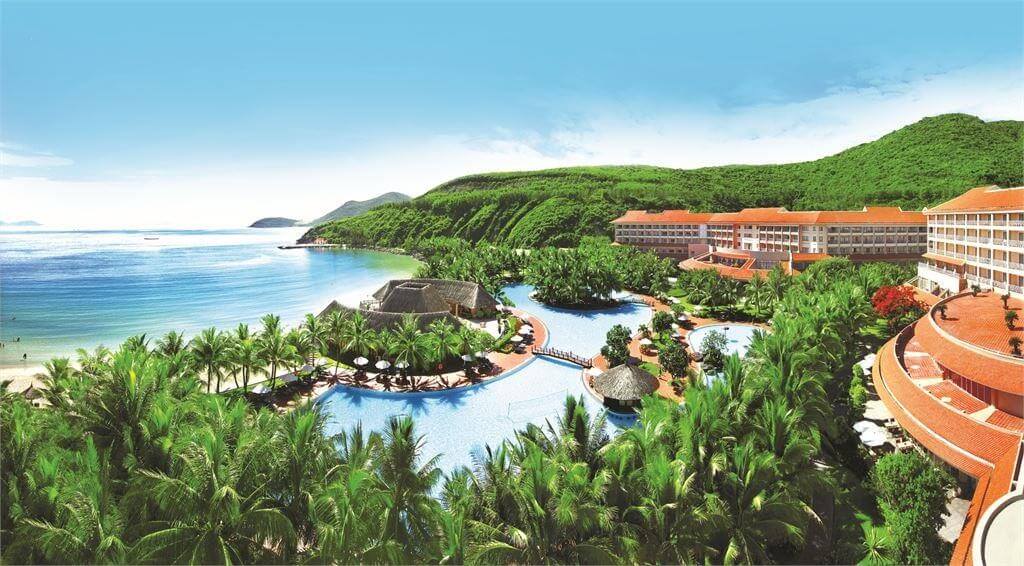 Vinpearl land island gives emotions and its visit is memorable for months to come. The vast majority of people like the entertainment offered, so they return here again.

Book your Vinpearl Island hotel with free admission to the park below: 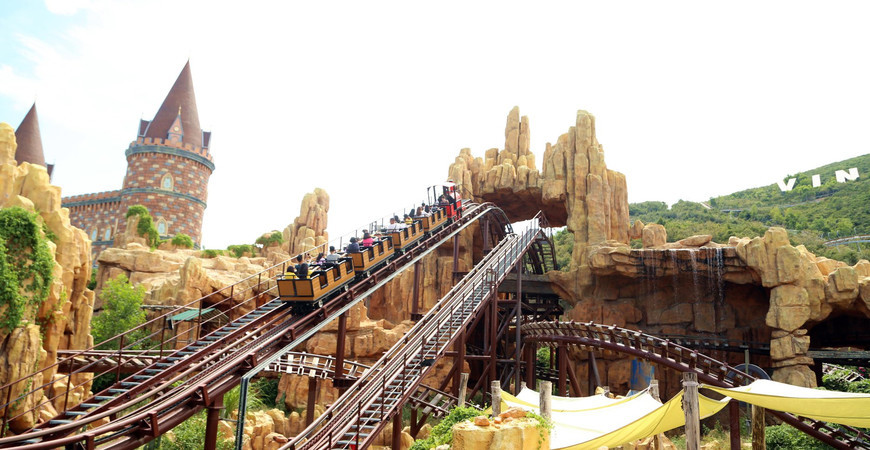 Attention: the schedule changes depending on the season. See the official website for the current opening hours on a specific date.

“Wineperl” is an amusement park in Vietnam, located in the picturesque Hon Che Bay in Nha Trang. It is one of the largest in area and the most popular among other attractions in the area. Stunning views of the Wynperl amusement park can be seen from anywhere on the beach in Nha Trang. Winperl Park is most popular among tourists – honeymooners, families with children and other beach lovers.

The total area of Winperl Park is 200,000 square meters. According to visitors, a trip to the park Winperl should be planned in advance, as it will take a large amount of time to visit.

Winperl Park prices and hours of operation in 2022

The park is open from 8:30 a.m. to 9 p.m. Admission ticket prices vary depending on the age of the visitor and the visit rate.

Children up to 100 cm tall are free. Visitors also have the option to buy complex tickets. For example, buy a joint ticket to the rides and the ropeway, or to the water park and the ropeway. All the numerous options for buying a ticket can be found on the official site of the facility.

Entertainment at the Wynperl Park

There is a huge number of attractions of different types for visitors of all ages placed in the park Winperl. There are extreme slides as well as more “simple” rides for younger visitors. In addition to the rides in the park there are unique attractions, such as cableway across the sea and interesting recreational areas. Below is a list of the most popular attractions at the Wynperl Park in Vietnam.

The roller coaster. The ride is made in the likeness of the classic extreme roller coaster, but the age limit for visitors is much lower – you can even get on the ride with a child of primary school age.

One of the most popular attractions of the Wynperl Park in Vietnam is the cable car, which extends over the sea depths. It is set 60 meters above the water, and its length is about 3.5 kilometers. Each of the cable car cabins is equipped with eight seats. According to visitors, the cabins are comfortable and safe, so there is no need to worry during the trip. On the opposite side of the park, which also leads to a cable car, is the statue of the Winepearl and a station of canoe cabs and ferries – so you can get back to the park.

One of the integral parts of the Wynperl Park is the water park, which is no less popular among visitors than the amusement park area. At the very entrance to the water park there is a multihill, which combines as many as 6 slides. In order to ride it, you need to take a mat matrac. Slightly more exciting slide is Kamikaze – it has more twists and turns. Water slide “Tsunami” resembles a device from the skate park, only much larger in size. According to visitors, it is quite extreme. Also in the water park Winperl park there are closed slides with tubes, wide family slides for several people to ride in one “tubing”.

At the entrance to the beach Winperl you can meet the so-called “obstacle course” – rafting. You have to wear a special vest to pass it. There are several sites for passing obstacles, after overcoming which you can find yourself on the beach. The surface of the beach is sandy. Its area is large enough to accommodate a large number of visitors. Also, visitors note the smooth entrance to the water, which is why it is absolutely safe to swim here with children.

Activities in the Wynperl Park

Winperl Park also hosts shows for children of different ages. Some of the most popular ones are the Mermaid Show, the Dolphin and Navy Seals Show, the Fountain Show, the Stilt Show and the European Carnival. Each mini-performance lasts about 10 minutes. Show programs are held throughout the day from 11:00 to 17:00.

One of the most visited areas of the park is the water music stage, which can accommodate 5 thousand spectators and is equipped with the latest technology. In addition to local performances, national cultural events like “Miss Vietnam” are held here.

For those tourists who want to live close to the pair, on its territory there are several five-star hotel complexes, equipped with all the amenities necessary for housing You can also stay on the other side, in one of the villas or in comfortable apartments. During the high season rooms should be booked in advance.