Chateaux of the Bavarian Kings

In just one day you will have time to enjoy the Alpine scenery, visit stunning architectural sights, and feel the magical atmosphere of the Bavarian countryside! I suggest you take a trip to Neuschwanstein and Hohenschwangau castles, Linederich Palace and the old town of Füssen, Oberammergau village and Ettal monastery, and then visit an authentic private brewery. It’s up to you to choose what you want to see!

Fairy castles and palaces of the kings are the calling card of Bavaria! In order to compare the architecture and to feel the spirit of bygone eras, I suggest you include any combination of them in your tour. If you wish, the itinerary can include any of the following objects. The trip will take from 8 to 11 hours. Typically, in 8-9 hours you can visit 1-2 sites, in 10-11 you can visit about 3-4 sites . Write me what you are interested in and I will specify the duration of the program!

Neuschwanstein Castle is the most popular project of the fairy tale King Ludwig II . The snow-white outline of the castle when you approach it, it reminds of a mirage on the background of the slopes of the Alps! On the way to the castle I will tell the life story of the “swan” king and his entourage. The interiors of Neuschwanstein tell tales of chivalrous legends and Germanic sagas, and from the panoramic bridge above the picturesque Pelata Gorge you can gaze at the emerald waterfall and take the best pictures of the castle.

Hohenschwangau Castle in neo-Gothic style has been preserved in its original form to this day. Guests of the castle were both the storyteller Hans Christian Andresen and the composer Richard Wagner. What these men of the arts and the Wittelsbach kings had in common, you can find out for sure!

The city of Füssen with its narrow streets, little courtyards, baroque churches and beautiful monastery building will seduce fans of old German towns! Time takes its breath away here! You find out why the emperors took a fancy to the town, what was on the local market in the good old days, and the interiors of the atmospheric pharmacy where you can read about medicinal remedies of the past.

Linderhoe Palace is a sumptuous miniature baroque palace surrounded by a beautiful and unusual park. One of the curiosities of Linderhof is the artificial grotto of Venus, which was a special stage for Wagner’s operas, whose audience was the king himself.

An excursion to the village brewery with a tasting is a must for connoisseurs of beer! You will see with your own eyes all the stages of production of the most popular beverage of Bavaria, from the lips of the brewers hear about the secrets and recipes of different varieties and taste unfiltered “live” beer directly from the beer tanks!

The authentic village of Oberammergau is a village of woodcarvers, painted fairy tale houses of the Little Red Riding Hood, the Grey Wolf, Cinderella and the Passion Theatre with a three hundred year history. When you visit Oberammergau, you will learn why some villagers grow their hair and beards for years, what the “Luftelmalerai” is, and where to see the waterwheel wall clock.

The Wieskirche, surrounded by legends, owes its magnificent decoration to the court architect and artist Dominik Zimmermann. Every year, around 1 million people visit the Viskirche! Let us also marvel at the pastoral landscape surrounding it and the peaceful, joyfully airy interiors of this rococo gem.

The active Benedictine abbey of Ettal impresses with its history of ups and downs and the careful preservation of tradition. You will visit the Ettal arena, visit the monastery church and find out how today’s novices live. Hear about the scandalous lawsuits of the Ettalian monastery and its successful commercial activities. And if you wish, we’ll take a look at the local cheese factory.

READ
Church of the Savior on the Blood in St. Petersburg, history and description

During a busy sightseeing day we’ll certainly choose a restaurant for a memorable lunch: On the shore of an Austrian lake (yes, you can even go to Austria!) where you’ll be offered to taste the fish caught right there. Or in the village gastehaus, which has been managed for centuries by a Bavarian family and offers venison dishes and the original beef “Böfflamott” in addition to the traditional schnitzel. Or you can enjoy a meal and a monastery beer in the restaurant at the Ettal monastery. 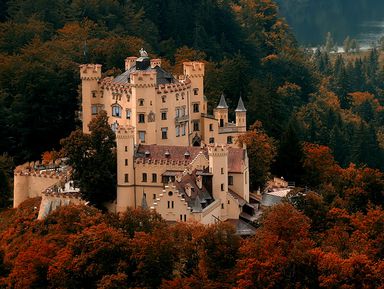 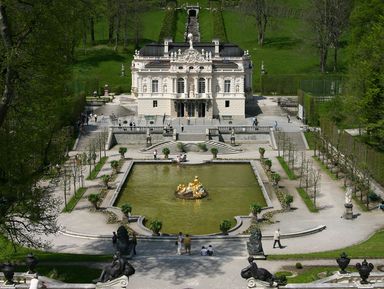 Wiskirche means ‘church in the meadow’ in German, and this beautiful church in Bavaria lives up to its name, being situated in a picturesque bucolic location far away from the bustling cities in the foothills of the Alps. However, despite its rustic locale, this church is incredibly luxurious. Many may wonder, because what is the point of building something so magnificent in such a remote place? It is easy to answer this question if you know the history of the Viskirche. 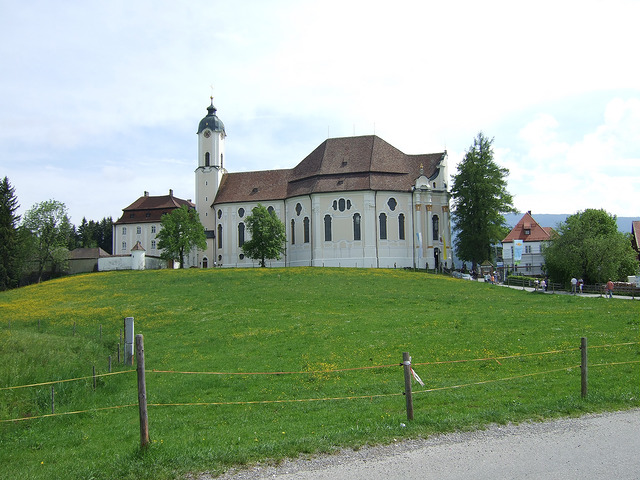 Wiskirche – “Church in the Meadow,” Bavaria

The origin of the Viskirche is related to the statue of the Scourged Christ. It was once used annually on Good Friday for a solemn procession. The action took place in the municipality of Steingaden. As time went on, the statue became dilapidated and unwanted, eventually falling into decommissioning in 1735. At first it was kept in the monastery’s attic, but a local peasant wanted to keep the statue for himself. The peasant’s name was Laurie and his wife Mary.

And then one day on June 14, 1738, Mary noticed tears on the sculpture and could not believe her eyes, but called her husband and was convinced of what was happening. The family told the entire village about the miracle, whose residents were also amazed.

After this event, after hearing about the incredible statue, pilgrims began to flock to Lori’s house. But after a year, there were so many people who wanted to see the weeping Christ that it was clear they had to build a temple, at least a small chapel. It happened fairly quickly, but after a year and a half, the number of people kept growing, and the small chapel couldn’t hold that many believers. That’s when the village of Vis became a major pilgrim center of Europe.

The master of rococo

Five years later, the abbot of the Steingaden monastery realized an urgent need for a church, and put in a request to Elector Maximilian III. As a result, construction of the Viskirche began in 1745 and was completed in 1754.

The wonderful history that envelops the church is not all its charm. The main value of the temple for modern society is cultural, because it was created by the recognized master of rococo – Dominik Zimmermann. The architect built many masterpieces in this style, but it is the Viesskirche that is the crowning glory of his creative life. In it the architect put all that he had achieved during his career. The church was the last work of the master, next to it he bought a house and died there. Zimmermann was assisted in the construction of the church by his brother Johann Batiste, a fine artist, who was responsible for the interior decoration of the Viskirche.

All critics and art historians unanimously agree that the Viskirche is the best monument-church in the Rococo style. The architecture, the stucco decoration, the stucco work, and the paintings all fit together perfectly.

Amazingly, world culture may have lost the Wizkirche forever when in 1803 they wanted to sell the church at auction to be dismantled later. However, the local community rose up to its defense and reclaimed the shrine. In 1983, the Viskirche was added to the UNESCO list.

Now, just as it was several centuries ago, the Church in the Meadow is a major pilgrimage site. People flock here to worship the miraculous statue of the Scourged Savior. By the way, throughout Bavaria, many churches and chapels have been built in honor of this image of the Savior, as well as more than 1,500 copies of the sculpture.

How do I get to the church?

At Munich Main Station take the train to Garmisch-Partenkirchen. Take the bus 9606 to Füssen and get off at the Oberau. After 1.25 hours, get off at the Wieskirche, Steingaden.

If you are by car, take the A96 from Munich to Lindau. Near Landsberg am Lech, you should change onto the B17 towards Füssen. In Steingaden turn left approx. 25 km before reaching Füssen and follow the sign for Wieskirche.

Address: Wies 14, 86989 Steingaden, Germany Opening hours: April-Oct 8.00-20.00, November-March 8.00-17.00. Keep in mind, in order not to disturb the sanctity of the place, tourists are not allowed to visit the church during the service or even walk around it. On the official website of the Viskirche you can find a schedule of desired visits.