Vorontsov Palace (Alupka) – the most detailed information with a photo and description, the location of the Alupka Museum Reserve on the map.

Vorontsov Palace is an architectural monument of the mid-19th century with a magnificent English park. The palace is located on the southern coast of Crimea in the town of Alupka overlooking Ai-Petri and the Black Sea. Vorontsov Palace is a whole complex of buildings, harmoniously combining classical English castle style, Neo-Moorish and Neo-Gothic architecture. It is one of the most beautiful buildings in Crimea and one of the most famous sightseeing sites on the southern coast of the peninsula.

Vorontsov Palace was a part of Alupka museum-reserve. One of its most notable features, besides the main building of the palace, is a park created by Karl Kebah. The park is an example of garden art and is designed in the traditional English style. Thanks to it the Vorontsov Palace strikingly blends in with the picturesque surrounding landscape.

Vorontsov Palace is located almost in the center of Alupka, 17 km from Yalta and 68 km from Sevastopol.

The English architect Edward Blore was a famous fan of medieval romanticism. Even from a distance (the Englishman had never been to Alupka) he managed to create a bright architectural masterpiece, in which European and Moorish motifs from the early Middle Ages merged harmoniously.

The Vorontsov and later the Vorontsov-Dashkov dynasty owned the palace until 1917. After the revolution, the palace was nationalized. After a few years there was founded Alupka museum. Unfortunately, most of the works of art had been taken out by the Germans during the occupation of the Crimean peninsula. In 1945 during the Yalta conference the palace was the residence of the British delegation.

READ
French Chateau of Chambord in the Loire Valley

Waterfall in an English park

After the war until 1955 there was located first a summer residence of NKVD, and then – a sanatorium. Since 1956 the Crimean Museum of Fine Arts was located in the Vorontsov Palace. Since 1990, the palace and the park are part of the Alupka Museum Reserve.

The architectural dominant feature of the museum-reserve is, of course, the palace building. The Vorontsov Palace is a complex of buildings consisting of five buildings, which, thanks to towers, gates, staircases and passages, resemble a medieval castle.

Vorontsov Palace was built of natural diabase stone, quarried in quarries nearby. The main facade faces the sea, where the famous Lion’s Terrace is located and the beautiful white marble staircase by Italian master Bonnani.

Entrance to the palace is paid. It includes a tour of the interiors and access to the Lion’s Terrace. In the park and courtyard you can walk around for free.

The gates and towers.

The northern facade and spacious courtyard are in the style of 16th- and 17th-century English castle architecture. You can also admire an impressive gate with two square towers and a clock.

Alupka’s park is considered to be a prime example of garden art. It was planned by a German horticulturist and botanist Karl Kebah. The park consists of two parts: the Lower and Upper Park.

The lower park is made in the style of the Italian Renaissance with shady alleys. At one time it included many sculptures, fountains, vases, and columns.

The Upper Park is in the traditional English style with picturesque rock debris and several ponds where swans and ducks live.

There are about 250 species of plants growing in the park.

Jewels of the Southern Coast of Crimea 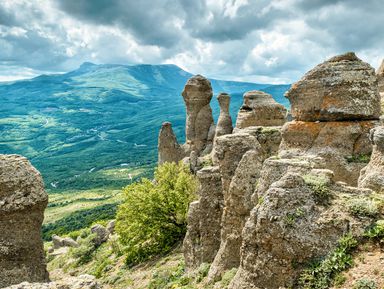 Vorontsov Palace in the Crimea 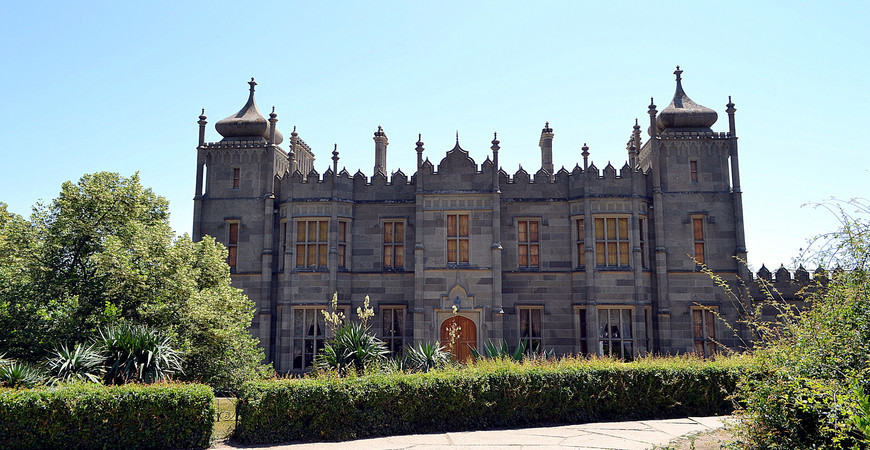 Depends on the variant of visit: from 100 to 1000 rubles. Discounts for students, pensioners and teenagers 16-18 years old.

Vorontsov Palace in Alupka (Crimea) is rightly considered to be one of the pearls of the peninsula. The elegant and at the same time majestic building is situated at the foot of Ai-Petri Mountain. It is surrounded with unique park complex, and an astonishing view over the Black Sea opens from the front stairs.

The palace complex blends harmonically into surrounding landscape, because its location corresponds to the mountain relief. That is why the palace has such an original image. Vorontsov Palace in the Crimea and the adjacent park often became a movie set. At least 17 movies have been shot there.

Ticket prices for the Vorontsov Palace in 2022

Ticket prices are listed on the official website of the complex. They depend on the selected expositions and excursions.

Working schedule depends on a season: the main Vorontsov Palace building works every day with the following schedule:

You can visit the exhibitions, temporary and permanent exhibitions every day from 09:00 to 17:00. However, the Parade Halls and South Terrace are open on Saturdays until 20:00. There are guided tours of the palace park, but only if you gather a group of 15 to 20 people. There are walking tours and electric car rides. “Single ticket” can be purchased any day except Monday and Wednesday.

History of the Vorontsov Palace

The first owner of the palace was His Serene Highness Prince Mikhail Semenovich Vorontsov, a descendant of an ancient family, known since the 14th century, a hero, who took part in many military campaigns and retired with the rank of field-marshal, a Novorossian and Bessarabian governor-general, an honorary member of the St. Petersburg Academy of Sciences. After his death in 1856, the palace was alternately owned by close relatives of the prince. After the revolution, the building was nationalized.

The construction period of the Vorontsov Palace in the Crimea dates back to 1828-1848. There were employed peasants to do the heavy lifting, and the relief work was done by hereditary stonemasons, by hand. First the Table Block was erected, and then the Central Block. Already in the 40s of the 19th century there was a billiard room, wings, towers, guest and household buildings, as well as a library. Sappers worked hard over the Southern terrace ledges. Thanks to them, Vorontsov Palace in Alupka got a chic grand staircase, on the pedestals of which in 1948 were mounted lions, made by the Italian master Giovanni Bonnani. This was the finishing chord of the decoration of the general ensemble of the palace complex.

Already in 1921 the Vorontsov Palace in the Crimea, which never changed its name, was turned into a museum. During the Second World War, the exhibits had no time to hide, so many of them were taken away by the occupants. The sums of the stolen exhibits were colossal. During the Yalta conference (February 1945) the palace was temporarily transformed into the residence of Winston Churchill and his entourage. Up to 1956 it was used as a government summer residence. Subsequently, it was decided to reopen the museum, which operates to this day, but already in a new status. In the 90s the complex was renamed as a palace and park museum-reserve.

The appearance of the building displays elements of different epochs and a successful combination of architectural styles – strict English, with a direction towards Neo-Gothic, and the splendid Oriental Neo-Moorish. It is interesting that the palace began to be built according to one project (by Italian Francesco Boffo and Englishman Thomas Harrison), and was finished by another (by the famous British eclectic architect Edward Blore). By the way, the latter, working on the project, did not visit Alupka, as he was too busy with orders of the royal family in his homeland.

READ
Hampton Court Palace in London and the park labyrinth

The main construction material of the Vorontsov Palace in Alupka is diabase, superior in strength to granite stones. The museum-preserve includes five separate buildings, courtyards, a terrace, grand and additional staircases, and a park area.

The official website of the Vorontsov Palace offers several interesting expositions. The main exposition is the State Rooms, which are located in the Main Building. Their decoration has been preserved almost in its original state. The decoration of the State Study follows all the rules of English style. There are portraits of the first owner and his brothers-in-arms who took part in the Battle of Borodino. The Chinese cabinet is able to surprise visitors with skillfully decorated furniture and mats of rice straw that occupy the most part of the walls’ surface. The entrance hall with its profiled wooden ceilings, austere furniture and fireplaces adorned with diabase portals is adjacent to the vestibule with an embroidered representation of the Shah of Persia. The blue drawing-room impresses with its refinement and amazing stucco ornamentation, once made by a fortress master.

In the Winter Garden, you can see a curly ficus, preserved since 1838, and rare exotic plants. There are curious sculptures and a fountain. The Vorontsov Palace in Alupka resembles a knight’s castle. There is an original balcony for musicians and a fountain, shaped as a fireplace, that attracts attention. The Billiard Room with paintings, placed on the walls, rounds off the exhibition.

The next exposition is the one-story Shuvalov’s outbuilding that only people close to M. Vorontsov’s daughter family had access to. The cozy house has several rooms, each of which is interesting in its own way. Then you can go to the butler’s apartment, located in the Household Building, and see how the servants of the Prince lived, receiving full board, and even a salary. You can also take a look into Vorontsov’s kitchen. And finally, another exposition of the Southern Terraces includes the grand staircase itself, sculptures of lions, flowerbeds, and cascading fountains.

In addition to the main objects of the Vorontsov Palace in Alupka, there are temporary and permanent exhibitions on its territory. Among them there are Russian and Western European porcelain and fayas, paintings of different periods, including the second half of the 20th century, sculptures, graphics, etc.

The lower part of the park is characterized by Italian regular style. Around the palace complex grow mostly coniferous trees – firs, firs, cedars, pines and cypresses, so the territory is always green. In spring and summer in the park bloom magnolias, exotic shrubs, and wonderful certis, whose trunks are thickly covered with purple-burgundy flowers, reminiscent of moths. The Vorontsov Palace Park is incredibly beautiful, and walking through it is an unbelievable pleasure.

Vorontsov Palace – how to get there

There are several options for visiting the palace and park complex in Alupka. There are two routes through the city – upper and lower, so you can get here from different settlements of the peninsula, connected by the South Coast and Sevastopol highway.

You can get to the Vorontsov Palace by a direct bus Sevastopol-Yalta to the bus stop ‘Nursery’ and walk there.

The way from Alushta to the Vorontsov Palace consists of two steps. First, you need to get on the Crimean trolleybus № 52 to Yalta, and then change to a bus or minibus (description above).

From Simferopol to the trolleybus station in Yalta, which is located near the “Bus Station”, you can get from the bus stop Sovetskaya Ploshcha to Yalta on trolleybus № 52, where you change to the bus № 107 to the stop “Pozharka / Amet-Khan Sultan Museum”. Then the way to the Vorontsov Palace – how to get there is described above. A quicker way to Yalta is to take an intercity bus.

Crimean cab drivers and private carriers know very well where the Vorontsov Palace is, so they deliver passengers not only from Yalta, but also from Foros, Gurzuf, Alushta and even Simferopol. When traveling independently by car, you will have to take care of a navigator in advance.

Important information Until October 2017, it was possible to get to the Vorontsov Palace by sea. Currently, the Alupka pier is closed due to its destruction