Who would have thought that under the ground there could be a sky studded with millions of stars… And it’s real! You only need to visit the Waitomo Caves to see for yourself.

One of the most unique and beautiful places in New Zealand is able to change the idea of natural beauty. At the Firefly Caves – as the place is also called – for all its realism, one can’t help but feel that it’s all untrue and too magical.

Long ago, locals in the New Zealand town of Te-Kuiti knew that somewhere there were extraordinary caves that could only be accessed by water. But no one ever dared to go deep into this mystical place (and this place was really considered something magical and mystical).

In 1887, one of the former rulers of the local Maori Tan Tinoro, along with a scientist from England Fred Mace ventured into the underground journey on a makeshift raft with just one candle in hand.

The fearlessness of the explorers was well rewarded – what stood before their eyes as soon as they sailed deep into the grotto could not be described in words, so fantastic was the beauty that unfolded to them. Intricately shaped limestone outcrops on the vaults were entirely covered with tiny glowing dots, which shimmered beautifully through the darkness.

More than once the discoverers had to return here to learn as much as possible about their find. After a while, they even managed to find an entrance to the cave from above (not through the water) – currently the main one.

The “glowing” grotto is part of the Waitomo Caves, which are made up of 150 different formations. Scientists estimate the age of these caves at about 2 million years, so they are considered to be almost the oldest on our planet.

READ
Coober Pedy is an underground city and the opal capital of the world. Australia

These millions of years ago there was water everywhere – the ocean, and all these formations were located at the bottom. Because of this for hundreds of thousands of years, various cave passages, labyrinths and tunnels were formed and laid out here, turning the rocky gorges into a unique natural masterpiece.

Then the water receded, and the inhabitants of the Earth had a unique opportunity to admire the wonders of submarine dungeons with their bizarre walls, covered with unusual stone figures and limestone outcrops, decorated with fish skeletons, corals and various shapes and sizes of shells.

This whole space is the real home for some kind of luminous creatures, which are endowed with the unique ability to emit light. All tourist trips to the cave are precisely to see this light with their own eyes.

In fact, these creatures are mushroom fireflies (Arachnocampa Luminosa). These unique living organisms can glow in the darkness with blue-green and lettuce-blue colors, clearly resembling the starry sky.

The luminescence itself is caused by a special chemical reaction that takes place in a special organ in the stomach area of the mosquito. Two special substances in the insect’s body mix with oxygen, which oxidizes them, and energy is produced in the form of light. These bright “dots” cover all the walls and ceiling of the caves, which, incidentally, were eventually named the Firefly Caves.

It is striking that researchers, biologists and scientists all over the world can not understand and explain the phenomenon of fireflies. According to one version, the glow depends on their state of hunger – the hungrier they are, the greater the intensity of the glow.

According to another version, the light is an attractive maneuver for potential victims (strings are woven, which are impregnated with a special substance that kills insects, and these strings are blown). The third version refutes the second one, because fireflies feed on mushroom spores and they do not need to catch anyone, and the emitting light has a purely decorative function.

But some biologists dared to suggest that adult mosquitoes eat insects and may well have hunting habits, but their larvae eat mushroom spores.

But in one thing scientists agreed on a hundred percent – the species of these insects (Luminosa) exists only on the islands of New Zealand. And to see with my own eyes this is their accumulation and assess their fabulous glow can be only in the underground complex Waitomo in the cave of fireflies.

Just 2 years after the Waitomo Caves were opened (in 1889) they were open to tourists. The tourist visits were managed by Tinoro himself. Together with his wife, he set up a small business, giving tours of the caves for a very small fee. To get into the cave could absolutely anyone.

But since 1906 (and to this day) the administration of the caves was taken over directly by the government. However, local residents are also actively involved in the maintenance of this tourist site, receiving for their work a percentage of the profits that tourists now bring for visiting this truly magical place.

The talented nature has created such miracles, that when you look at them, you involuntarily think about some supernatural mysterious power, capable of plunging in amazement even the most orthodox skeptics. And these natural surprises, which can compete with the legendary Seven Wonders of the World, are many on our planet.

One of them is in New Zealand, in the country, which itself is a kind of natural wonder – Waitomo Firefly Cave – the world’s only underground formation of its kind. 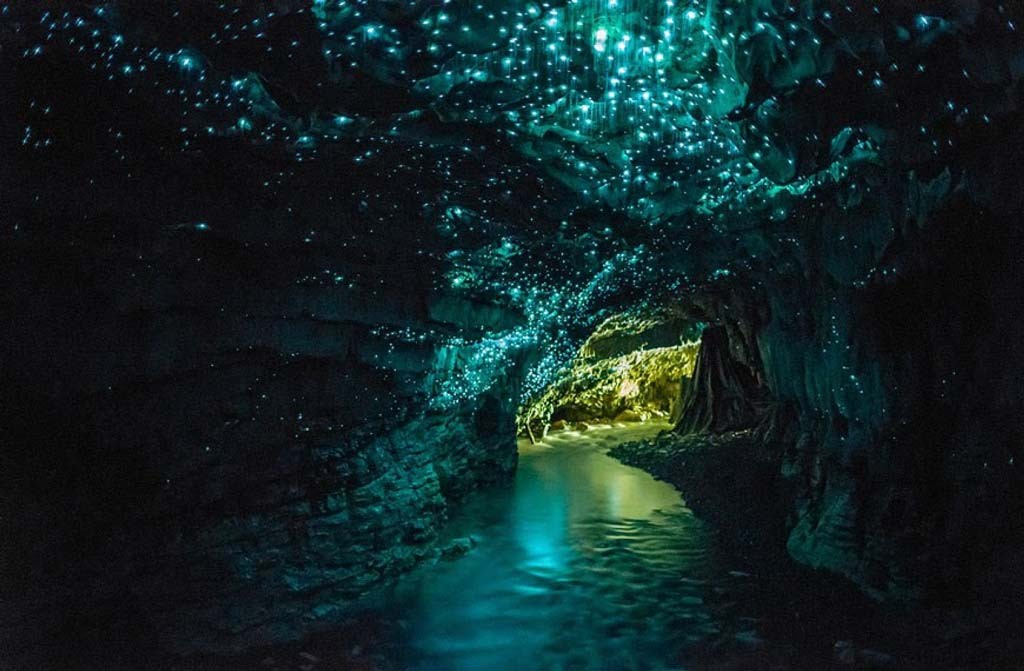 How did the Firefly Cave come to be?

Millions of years ago, in place of today’s caves, there was an ocean, the bottom of which was riddled with limestone mazes. After the global changes of the Earth’s crust the ocean gave way to the land and the unique stalagmite and stalactite caves of Waitomo were formed from the underwater convolutions of limestone. There are 150 of them: Ruakuri, Gardnes Gat, Aranui – it is impossible to list them all. The walls of the caves are formed from limestone, formed over the millennia from corals, fish skeletons, small and large shells and countless different small marine organisms. 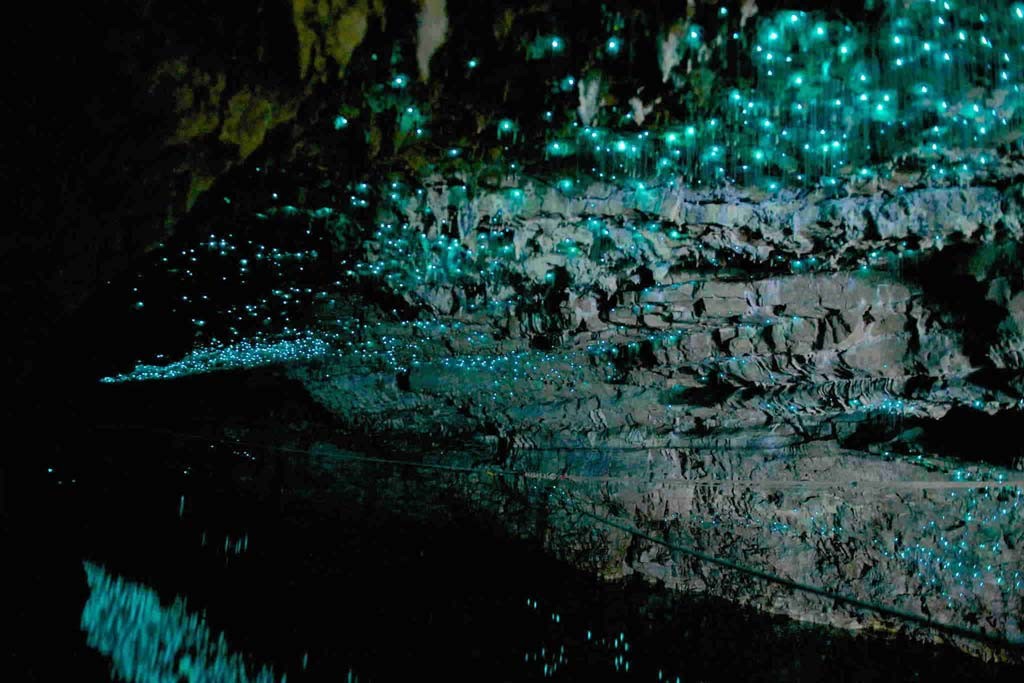 The most amazing, full of mystery and special charm is the Firefly Cave, where tourists staying in New Zealand are eager to visit. Despite the fact that here literally every corner is a spectacle of fantastic beauty, a visit to the cave with a mysterious glow makes the silent rapture of such unusual contemplation numb. 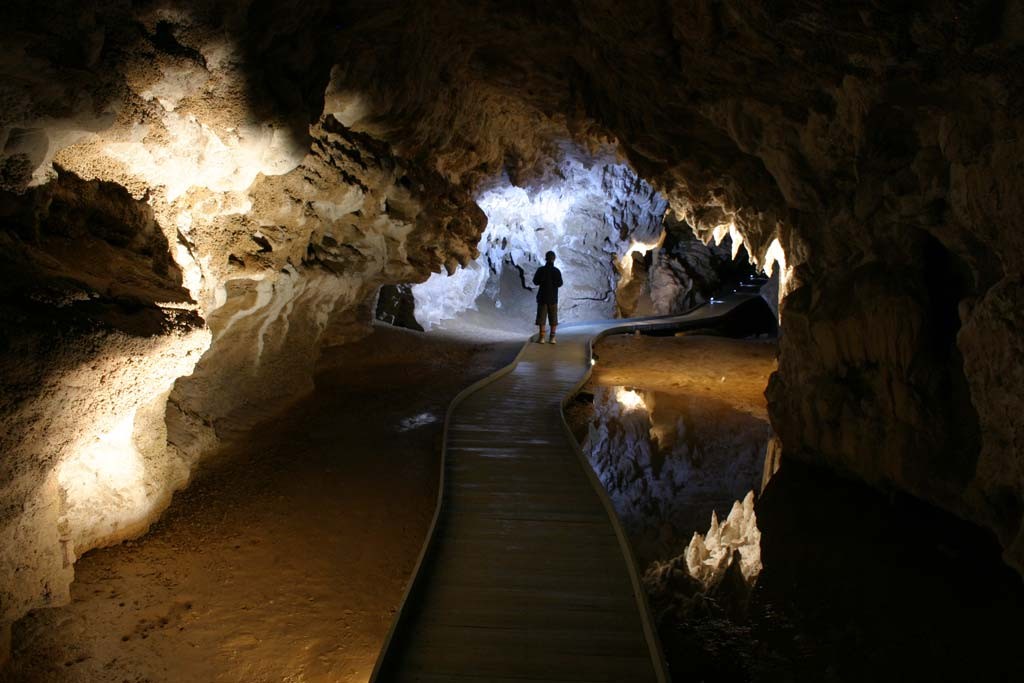 It is truly unusual, almost magical, because whoever enters this cave sees under the ground a picture as if of a starry sky with small twinkling luminaries. The only difference is that all of them are strung in a kind of garlands, hanging from the ceiling of the cave, and if you stretch out your hand, you can touch these luminous points. The mesmerizing spectacle is like a fairy tale, so the number of those who want to see it increases every year. 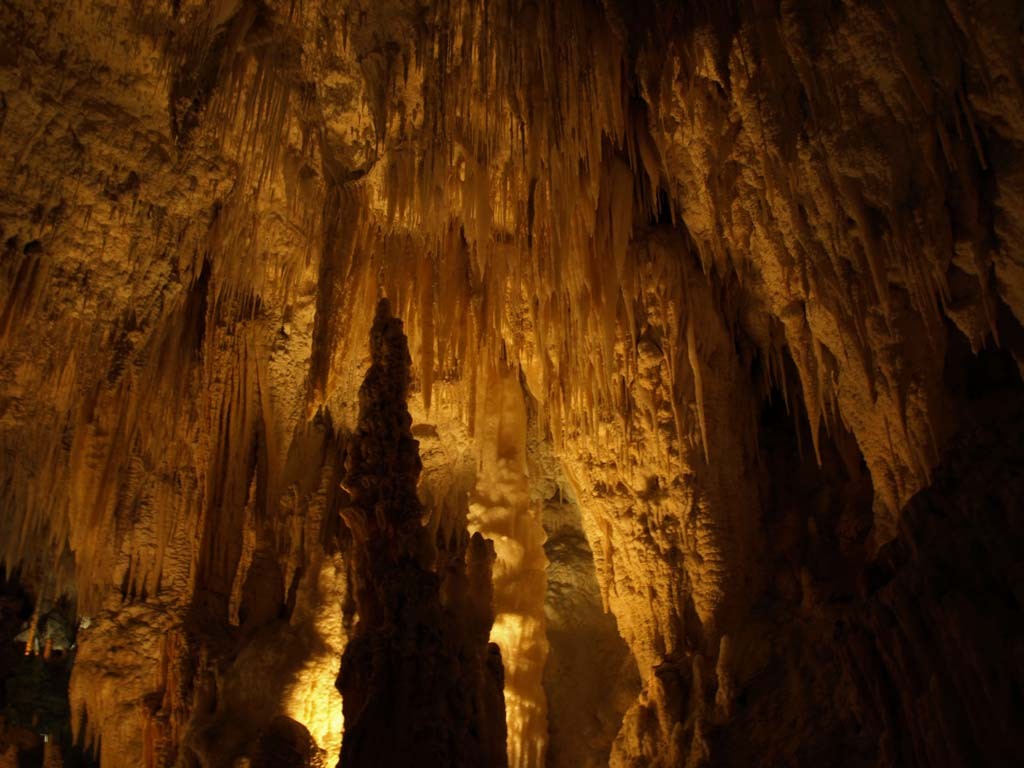 The Maori tribes gave the caves their name, Waitomo, which means “water hole” in their language: “wai” for water, “tomo” for hole. For many centuries no one swam in them: the Maori were frightened away by the cave’s darkness, and people were afraid even to get close to the mysterious objects. But the more civilization developed under the influence of Europeans, the sharper was the desire to penetrate into the unexplored depths of the caves. 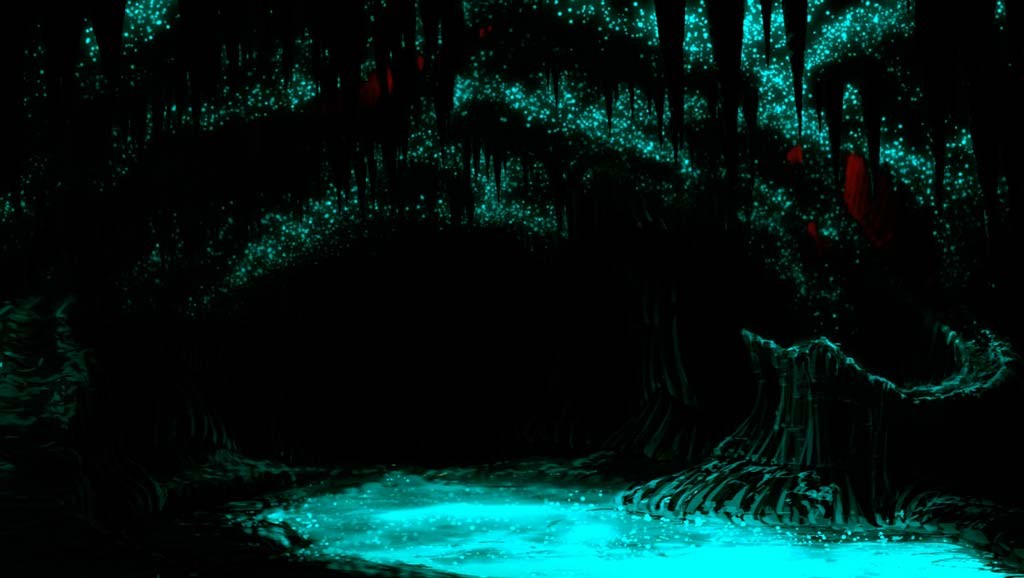 The first real survey took place in 1887, which was organized by the chief of the Maori tribe Tane Tioranu, together with the English naturalist Fred Mace. Several sturdy boats were outfitted, and sturdy fellows were selected to row. The expedition was undertaken by the light of hundreds of candles to examine in detail the limestone deposits in the caves. Words cannot describe the amazement of everyone who saw the cave, resembling a starry sky: fear, delight, joy. 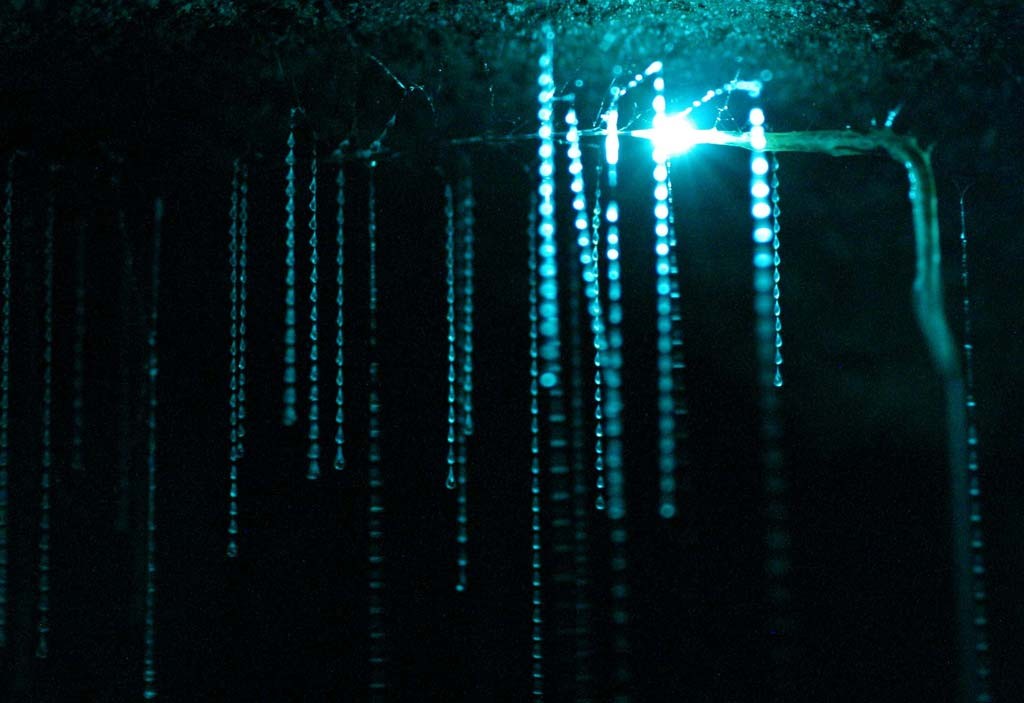 The organizers realized that in the future this place will bring considerable income as a unique tourist attraction. From that moment the struggle for the right of ownership of the unusual cave began between the official government of New Zealand and the Maori tribes, on whose territory the cave is located. 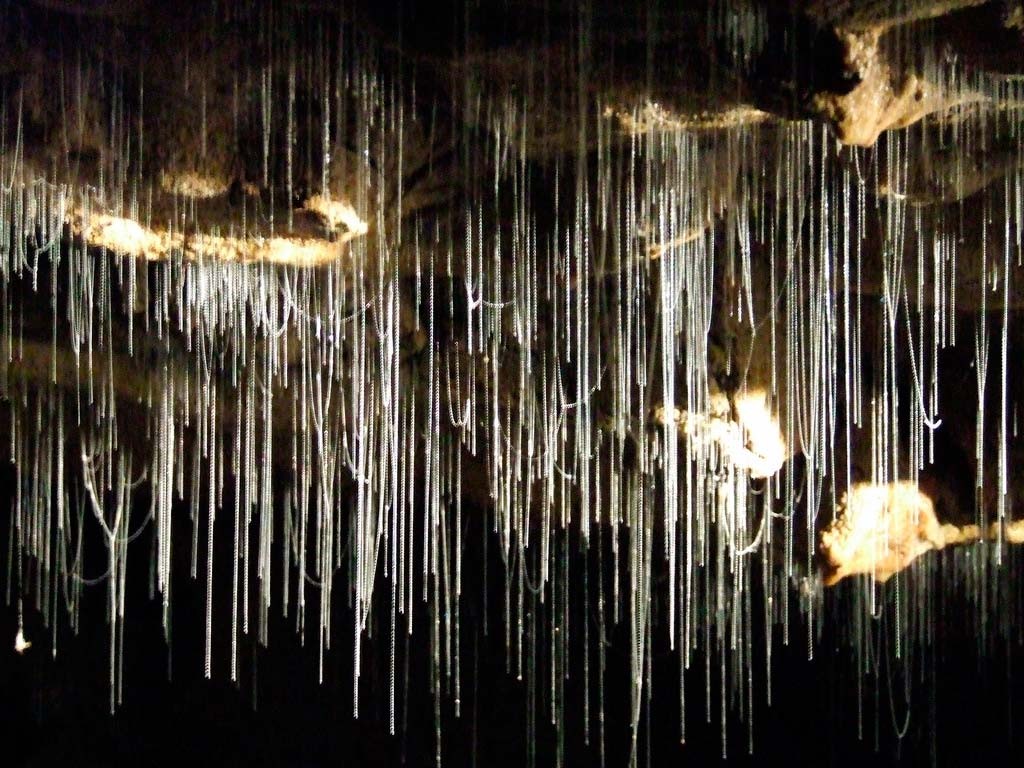 As a result, in 1904 the government declared this site with a nature mystery the property of the state with the proviso that the tribal leader would receive a percentage of paid visits to the cave, as the discoverer. Now already Tioranu’s distant descendants receive a percentage of the tourist business’s income. Geologists, speleologists, biologists, and zoologists have rushed from all over the world to solve the mystery of the extraordinary glow in the cave. 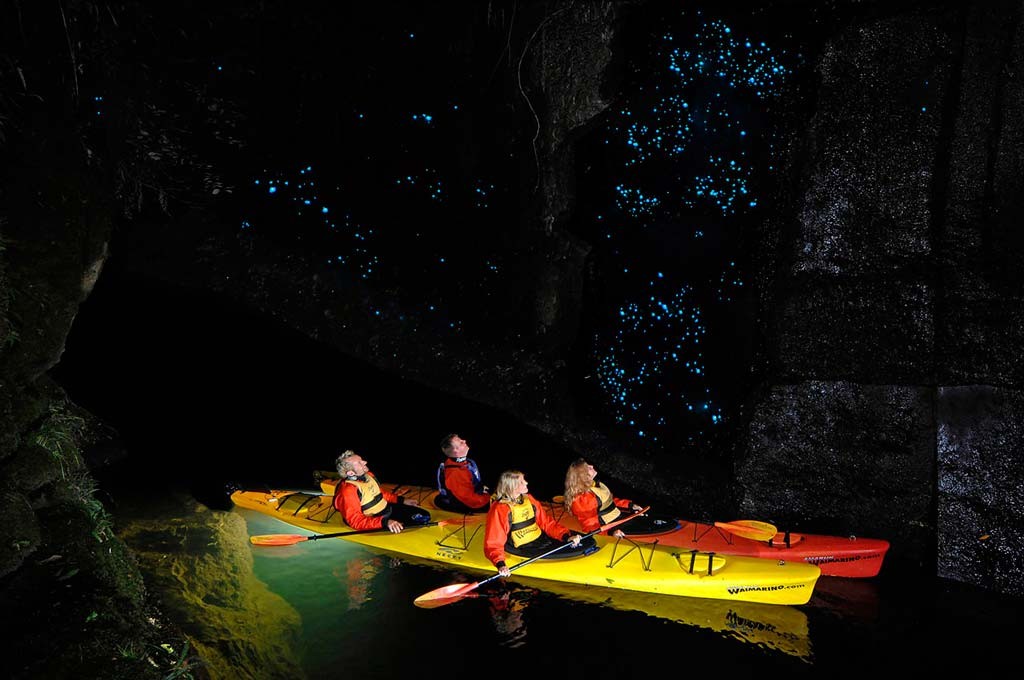 The mystery of fireflies

Every miracle has a very real explanation: the bluish-greenish glow in Waitomo Cave has one too. Careful research has shown that the glow is caused by…the tiny fireflies that live there. According to one scientific theory, the glow is thought to be a way of luring insects flying into the light and getting eaten by fireflies. 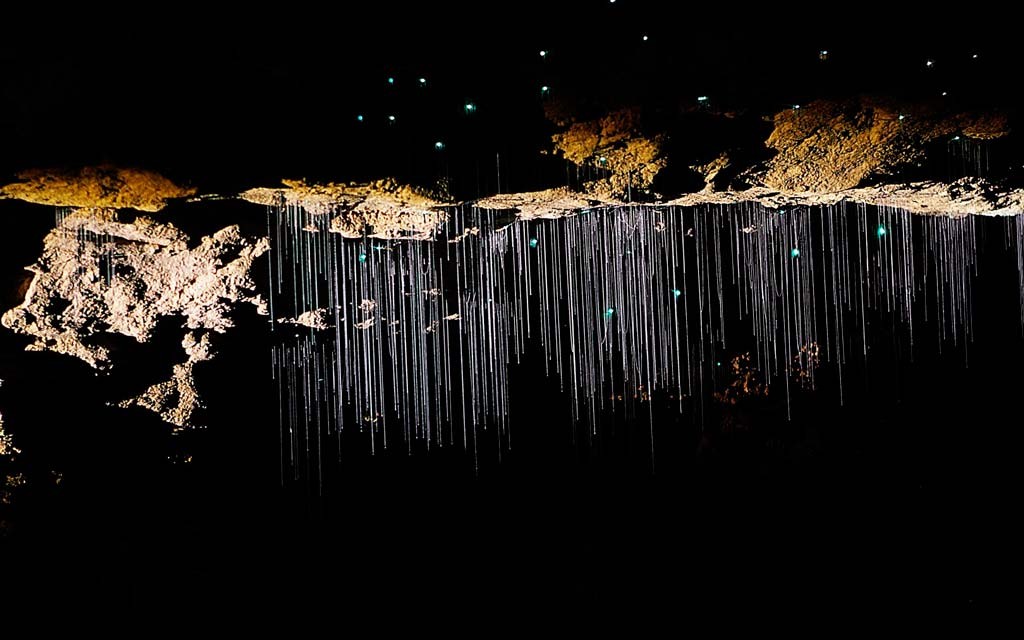 When they are hungry, their abdomen begins to glow brightly and attract their victims for satiation. The hungrier the fireflies are, the brighter the glow; as they are satiated, the glow fades. Thousands of spider webs hang from the ceiling of the cave, to which these luminous dwellers attach themselves with sticky saliva and guard their prey. It has been observed that the moment they are touched, the glow stops and the fireflies become invisible.

According to another version, it is not at all the way to attract food that makes insects glow. Observations have established that fireflies also feed on mushroom spores, which do not need to be lured, and the glow does not stop at this time. Whether the exact explanation is found or not – it is not so important, the main thing is that this phenomenon pleases people, attracts their attention and leads to the understanding that Mother Nature conceals many mysteries, the mystery of which is sometimes impossible to solve. They simply must be admired!