After the Ludwig Museum, I went to the Walraf-Richartz Museum. Initially I didn’t have a lot of expectations about this gallery and I even thought about not going, but the museum card was already bought, so there was nothing to do – go!

The Walraf-Richartz Museum in Cologne, how it all began

After his death, Franz Ferdinand Walraf bequeathed his estate to the city of Cologne. And on February 18, 1824 a huge estate and many paintings, drawings, books and coins came into the possession of the city. So Cologne had to find a place to house all this inheritance. 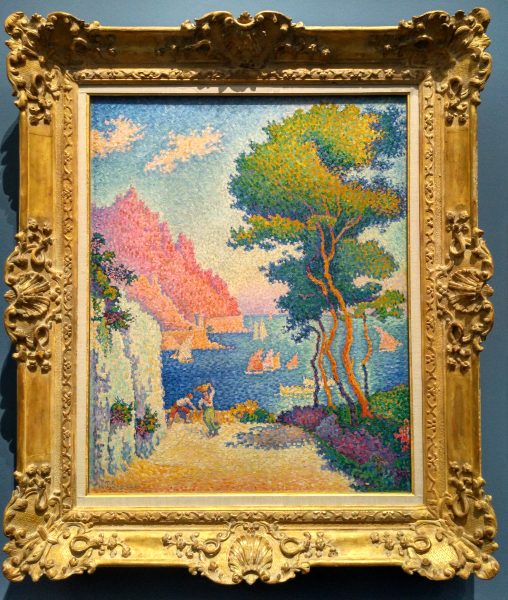 As a result of heated debates it was decided to build a special building for the museum, but no money was found for it. It was not until 30 years later, thanks to a donation from the merchant Johann Heinrich Richardz, that work began on the construction of the first museum in the Rhine area.

Seven years later, on July 1, 1861, the Walraf-Richartz museum was opened with great pomp. Unfortunately the benefactor did not live to see this day.

The Walraf-Richartz Museum during the Second World War

The popularity of the museum was gaining momentum. Loans, gifts, and purchases of paintings by old masters and modern impressionist artists made the Walraf-Richartz Museum one of the foremost in all of Germany.

In 1936 the museum acquired the Carstagen Collection with valuable works by Rembrandt and Frans Hals .

And within a year the National Socialists confiscated countless works for their propaganda exhibition of degenerate art . The collection lost many priceless works, including paintings and drawings by Picasso, Munch, Beckmann, Gaughin, Dix, and Kokoschka . 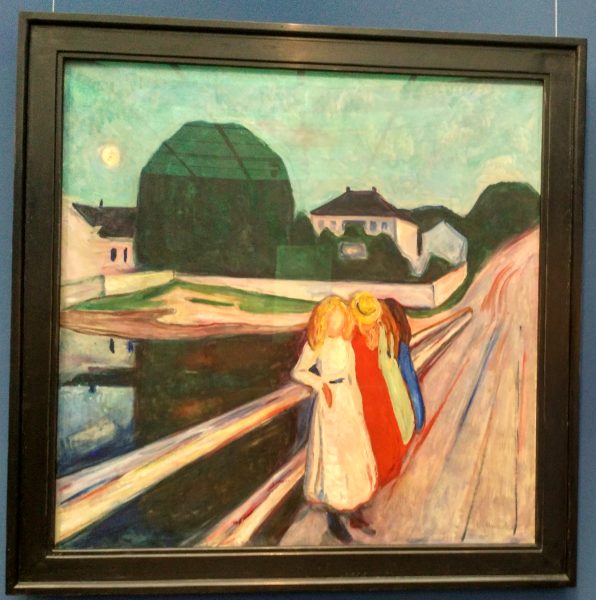 One blow followed another: during a night-time bombing raid in 1943, the museum was completely destroyed. Fortunately the exhibits were evacuated in time .

Walraf-Richartz and Ludwig Museum under one roof

The subsequent history of the Walraf-Richartz Museum is closely linked to that of the Ludwig Museum, which I have already written about. Briefly, in 1946, the lawyer Josef Haubrich donated his unique collection of German expressionist and modernist works to the city as a replacement for works confiscated by the Nazi regime.

As a result of all the twists and turns and donations, the collections of the two museums piled up under one roof. This went on until the building was no longer physically able to hold all of the works. It was not until 1996 that it was decided to build a new building and the Walraf-Richartz Museum moved into its own house in 2001.

Walraf-Richartz-Museum and the Corbo Foundation

After the opening of the new building, Swiss collector Gerard Corbeau gave the museum his Impressionist collection for a long-term loan. The official name of the museum is now Walraf-Richartz-Museum & Corbeau Foundation. 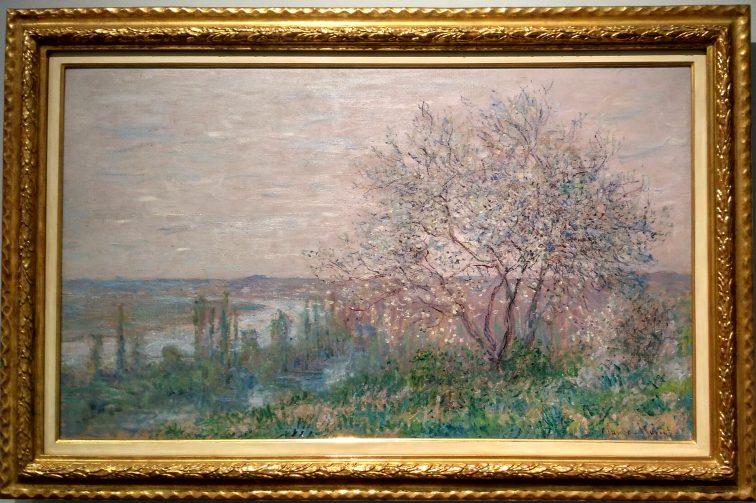 How I respect museums that have a website where you can see the collection of paintings. And the Walraf-Richartz Museum website even has floor plans with all the rooms, clicking on which you can see the paintings displayed there http://www.wallraf.museum/en/collections/19th-century/information/. 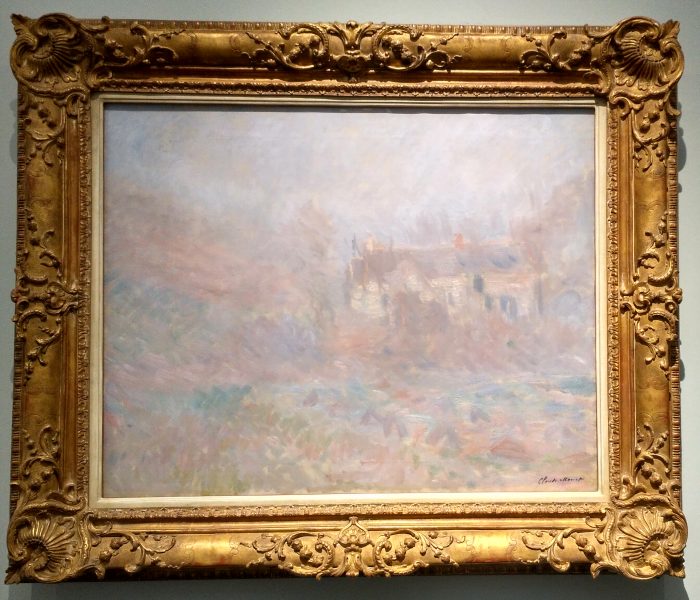 The third floor of the museum housed artists such as Van Gogh, Cézanne, Renoir, Monet, Manet, Gauguin, Signac, Ensor and Munch . Thanks to the Corboud Foundation, the museum has the most extensive collection of impressionist and neo-impressionist art in Germany (works by Renoir, Van Gogh, Monet, Cézanne, Munch). 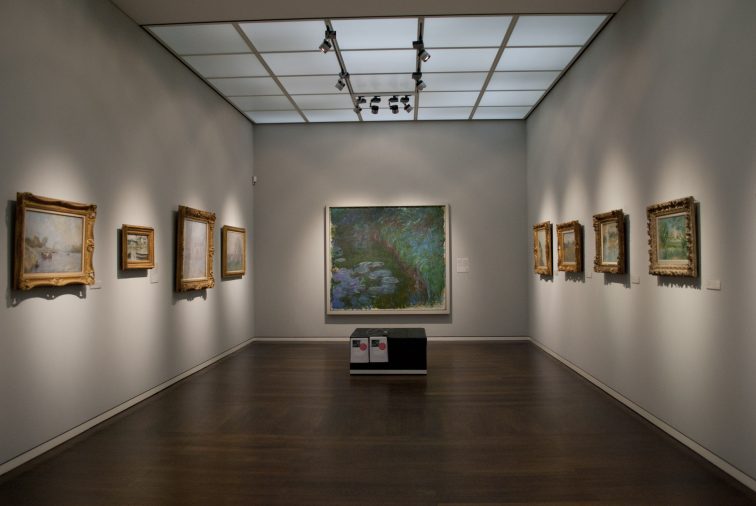 To be honest, I haven’t really studied the collection at home, so when I got on the floor, I was blown away! I wanted to stay there! And the pleasure grew from hall to hall. :)) 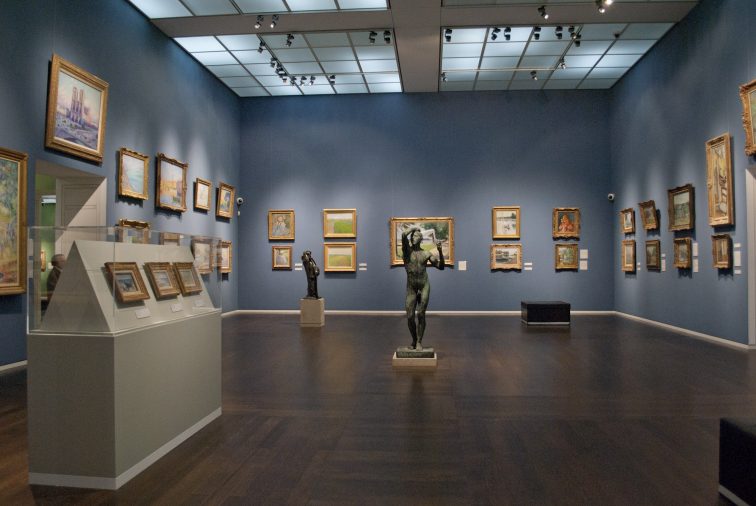 What can I say, this is just a great gallery! The Impressionist collection is really impressive. The other floors I galloped through for the sake of interest, I’m not a fan of realism, much less religious painting, but I found the exhibits interesting.

I also had a view of the city, especially the town hall, which was blocked off from all sides. 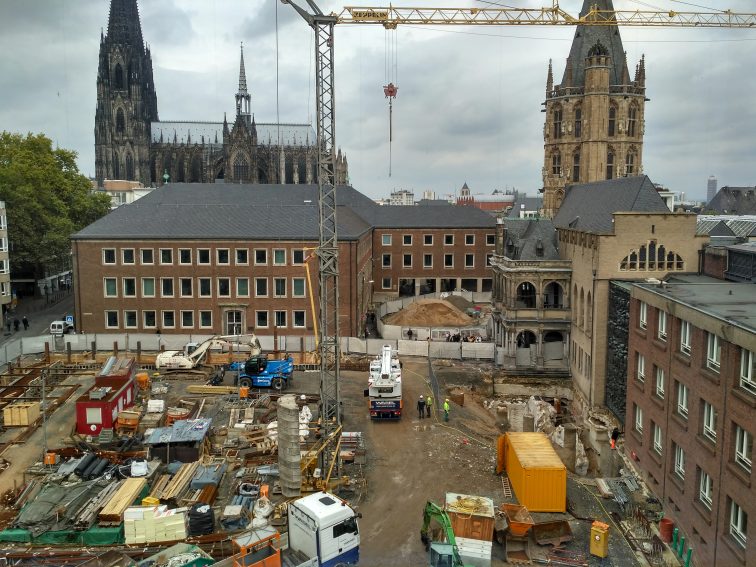 Of all the museums I visited in Europe, the Walraf-Richartz Museum was one of the strongest and most interesting.

Walraf-Richartz Museum, how to save money?

If you, like me, are going to several museums in Cologne (and if you are interested in this museum, its colleague the Ludwig Museum would be inexcusable) it is worth buying The MuseumsCard.

It costs €18 (€30 for a family, 2 adults and 2 children). The museumsCard entitles you to two days of free museum admission and free public transportation on the first day. The card is valid for the following museums:

In order to use the card, the cardholder’s name and the date and time of validity must be entered. This means that the card is personal and cannot be transferred to anyone else. The card must be validated at a special machine before using it for the first time. 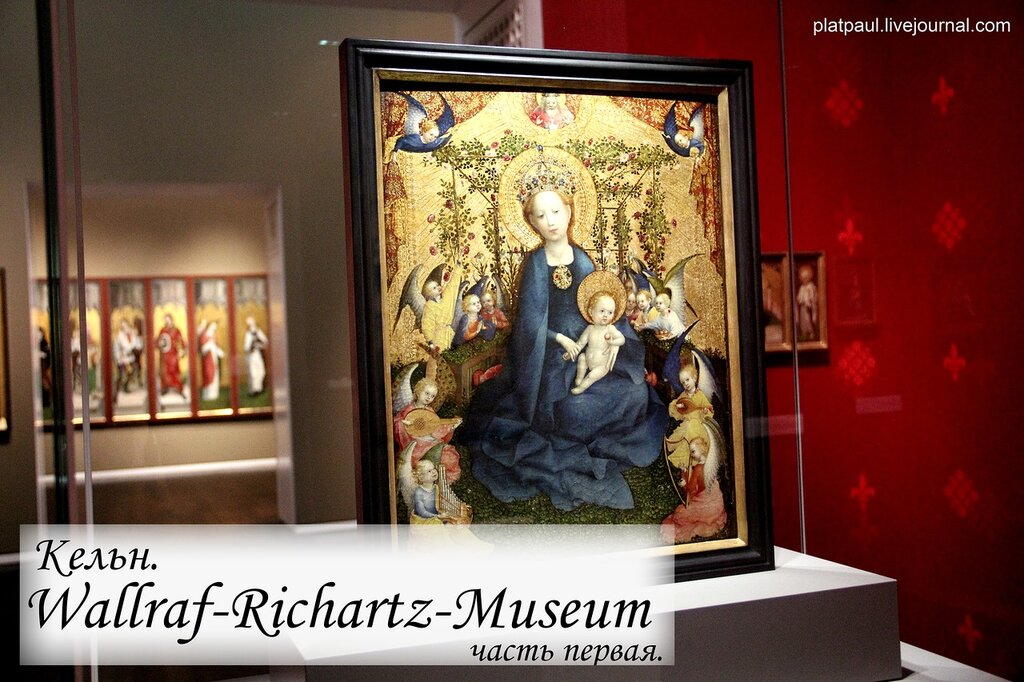 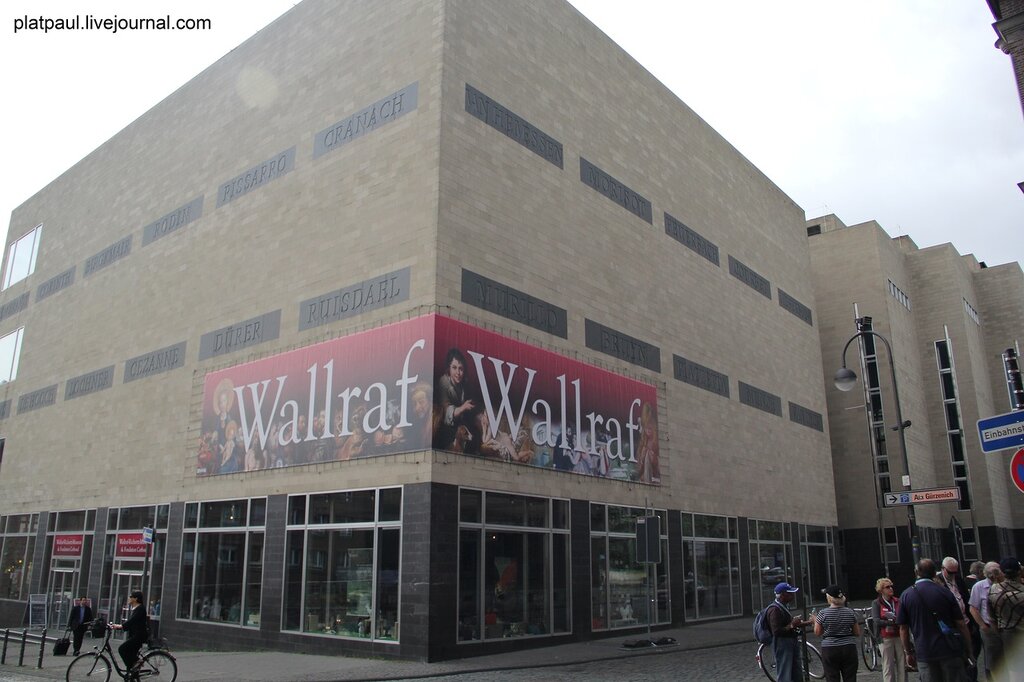 1. I really love museums, and my little discovery this year was the giant collection of medieval paintings of the Cologne Wallraf-Richartz-Museum (German for “Wallraf-Richartz-Museum & Fondation Corboud”). As it turns out, it is one of Germany’s major art galleries, and over the years this museum has had several more affiliated branches that have become full-fledged museums with their own special collections. 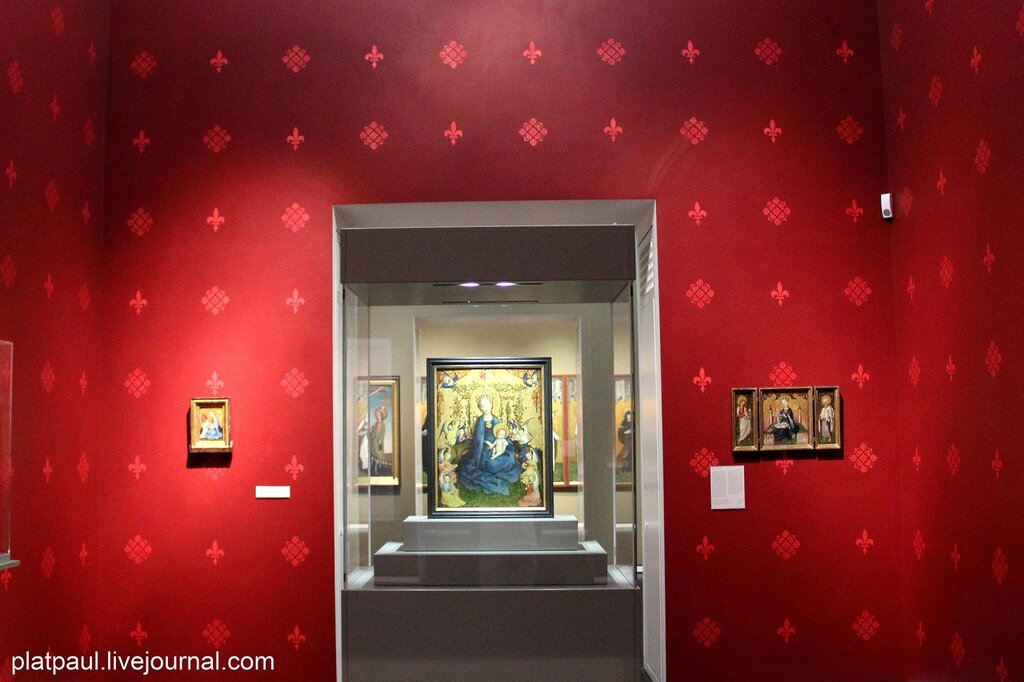 2. The museum was founded in 1827 and in its name contains the names of the collectors whose collections laid the foundation and expansion of the collection. Ferdinand Franz Walraf (1748-1824) was a scholar, canon scholar, and rector of the University of Cologne. This core collection grew and expanded, and soon the building once long ago built with money from the Cologne merchant Johann Heinrich Richartz (and he donated 232,000 thalers to build it) was not enough, then there were wars and destruction, but finally the new Walraf-Richartz Museum building opened on January 19, 2001. 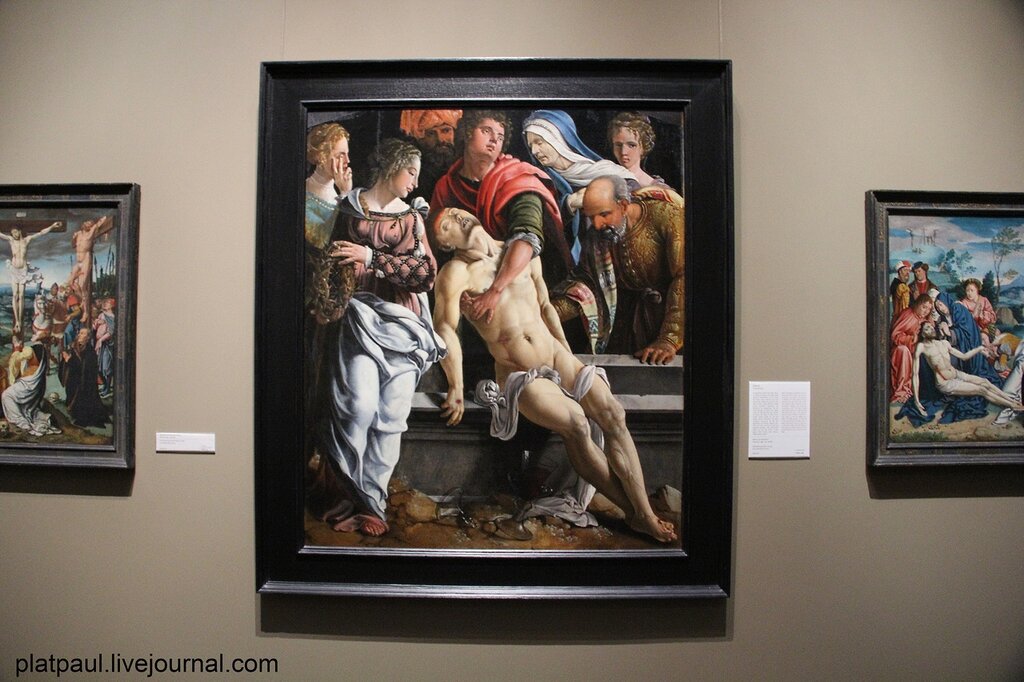 3. The museum houses one of the largest collections of medieval paintings. It occupies the entire first floor. No other city has preserved such a large collection of medieval paintings. At the time of the secularization, the museum’s founder, Ferdinand Franz Walraf, collected altarpieces, which became the basis for the museum’s medieval department. That’s what we’re talking about today. 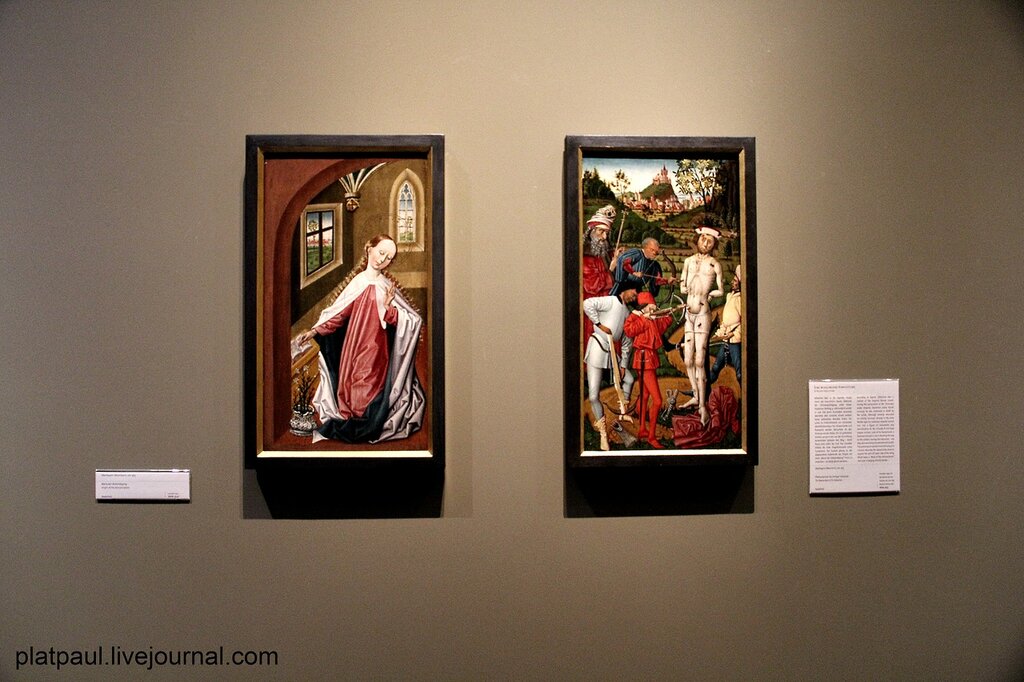 4. the silence and the sparse audience encouraged quiet contemplation of the beautiful. 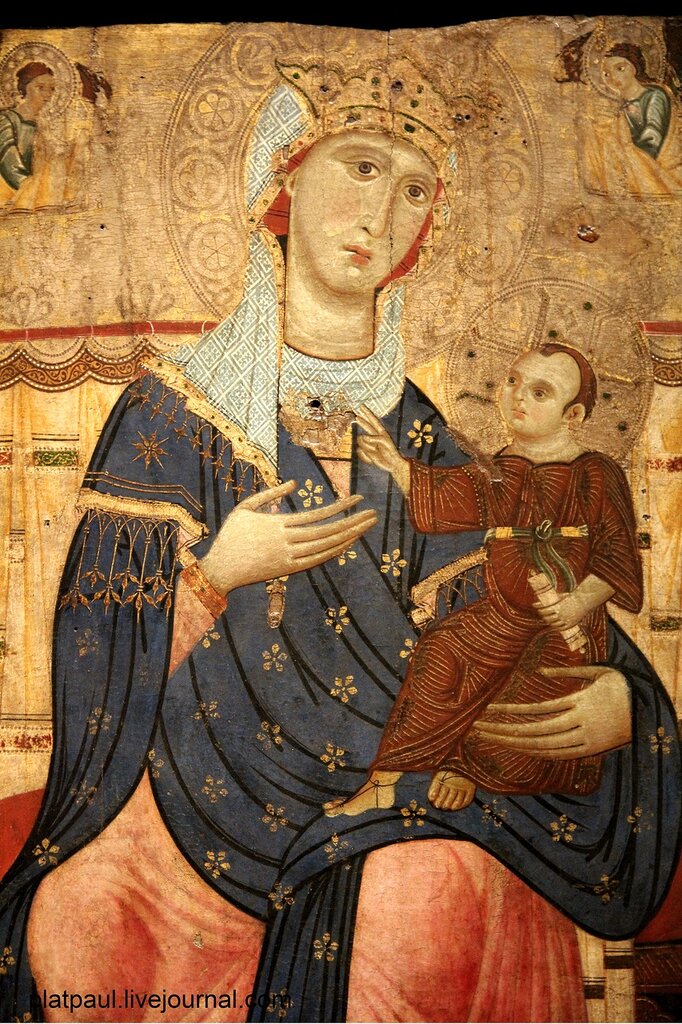 5. All the themes of the Middle Ages, of course, touched the religious side: numerous faces of saints look from the walls of the museum halls, the history of early Christianity, how people perceived it then. 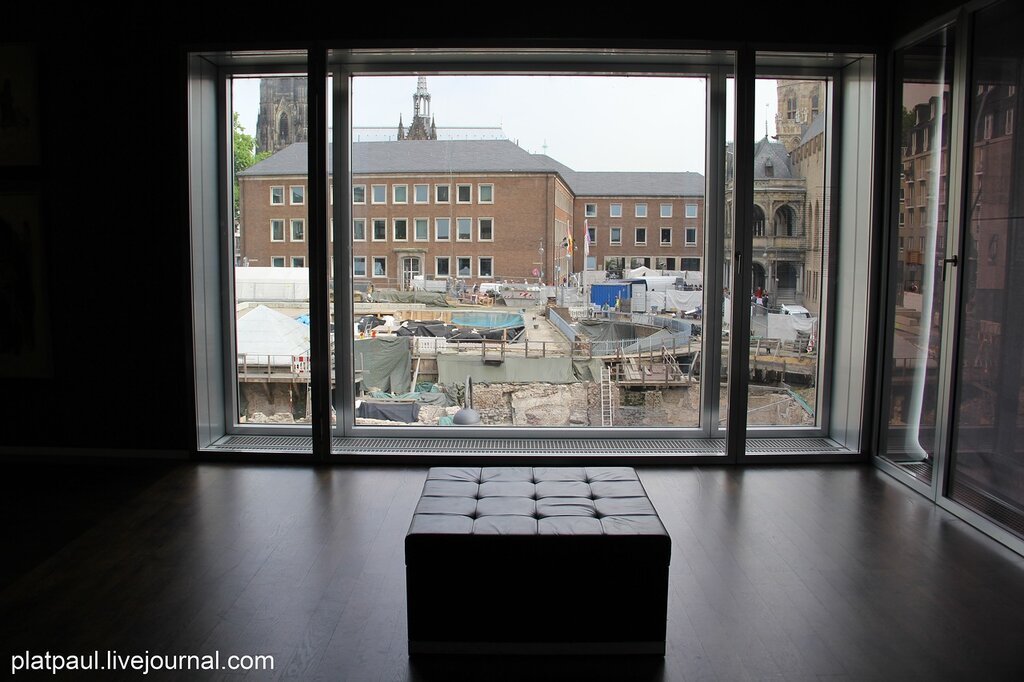 6. In front of the museum windows an open-air museum “grows” out of the ground – here in the center of the city excavations of the Jewish quarter (the community in Cologne is one of the oldest in Germany, buildings from the first half of the 11th century) are underway. 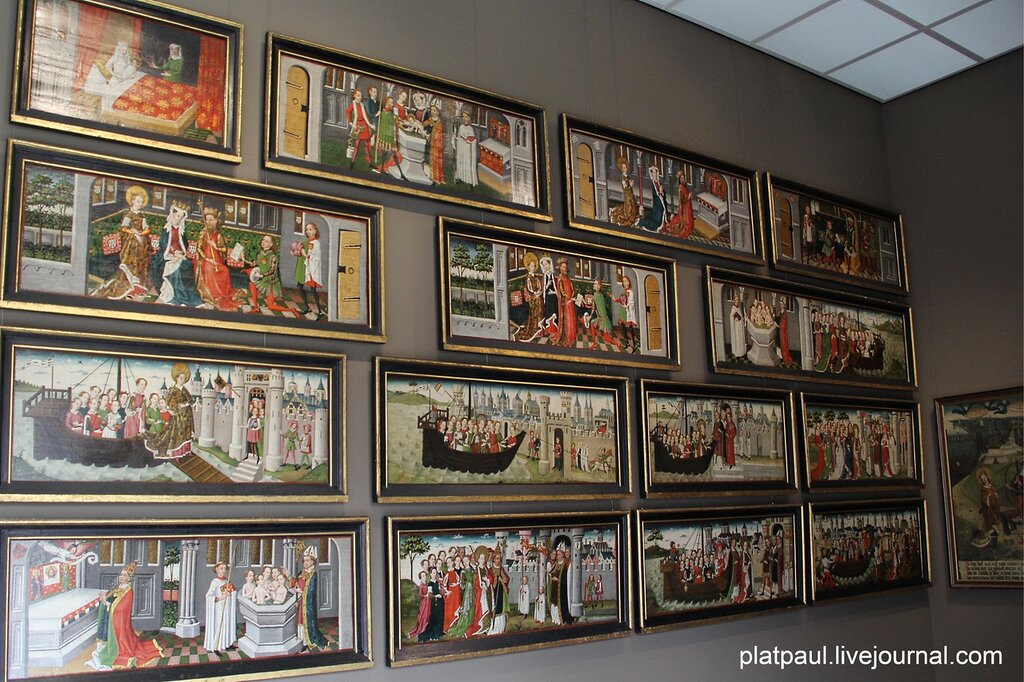 7. The story of Cologne’s very own Saint Ursula from the beginning to her martyrdom is told in chronological order. 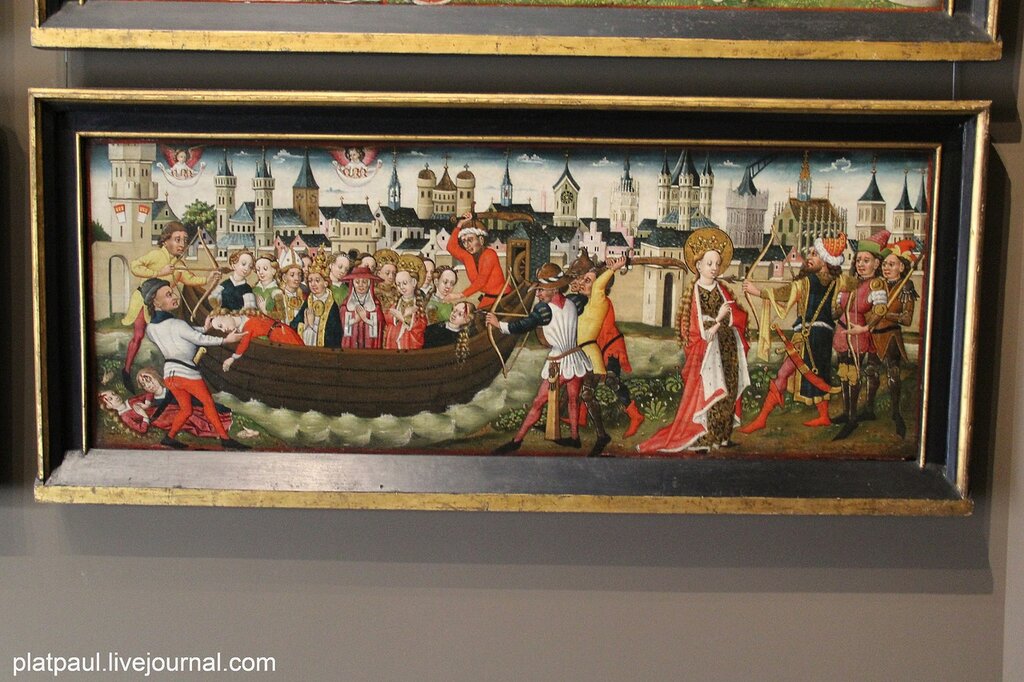 8. One of the scenes of Saint Ursula’s life is her capture, all set against the backdrop of the medieval city of Cologne. 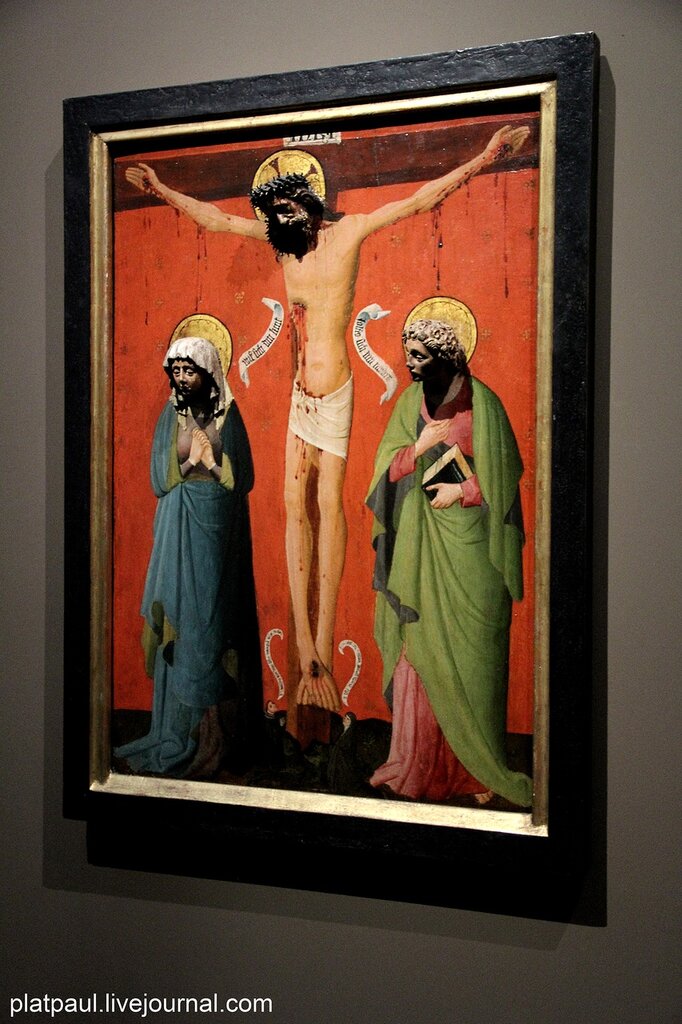 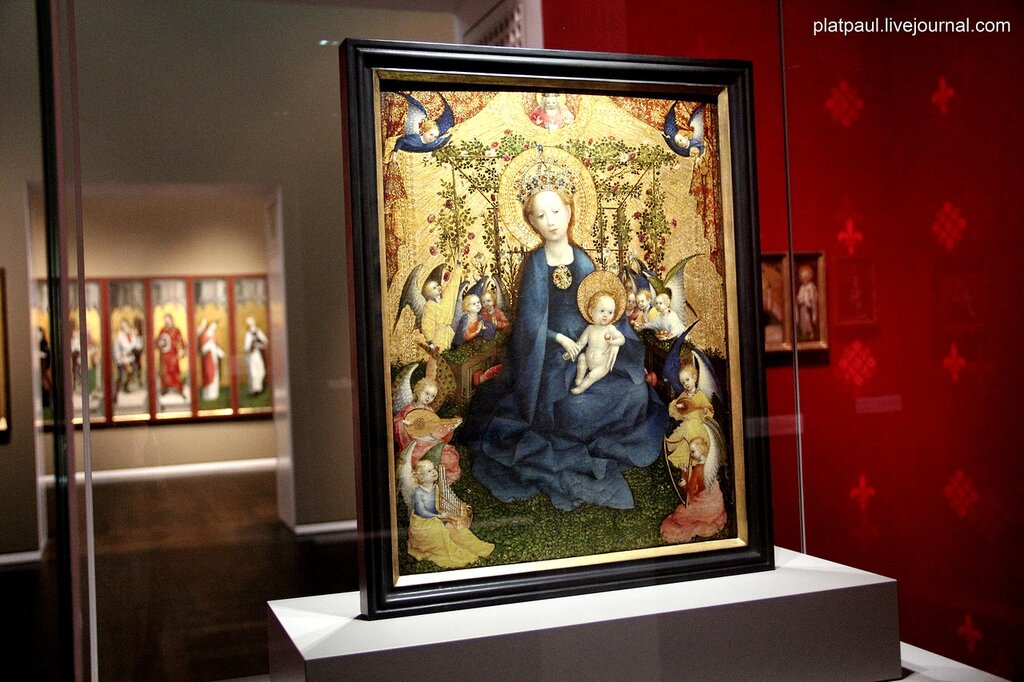 10. By the way, the museum is located approximately where the studio of Cologne’s most famous medieval painter, Stephan Lochner, once stood. According to researchers, this is one of his last works, called Our Lady in the Rose Arbor. About 1448. 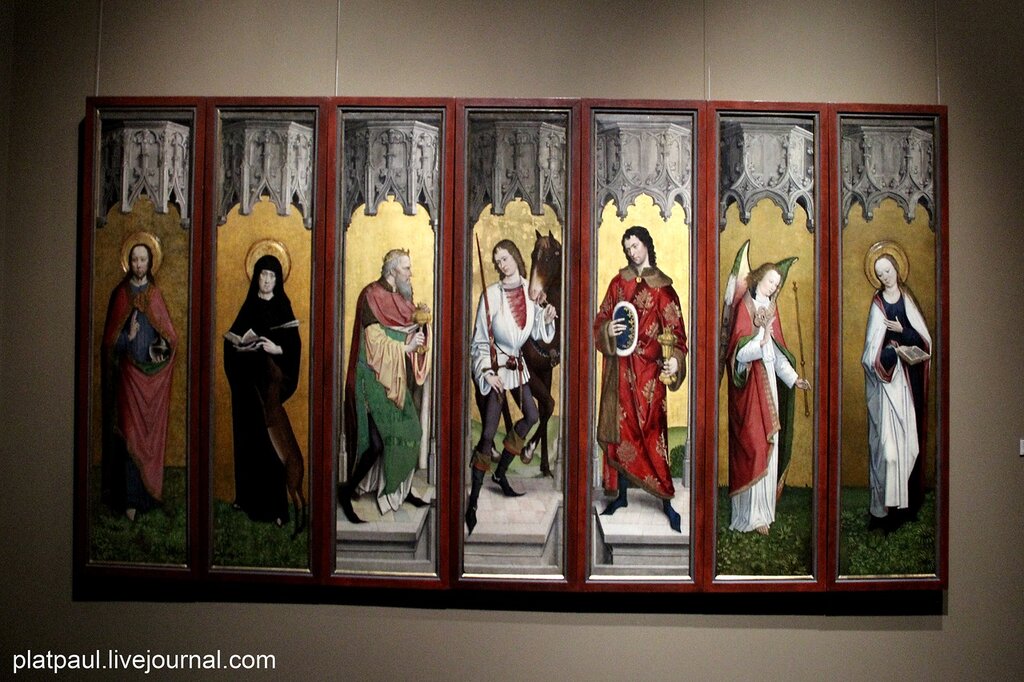 13. All the paintings are very interesting and full of detail and accents, for example that angel over there. 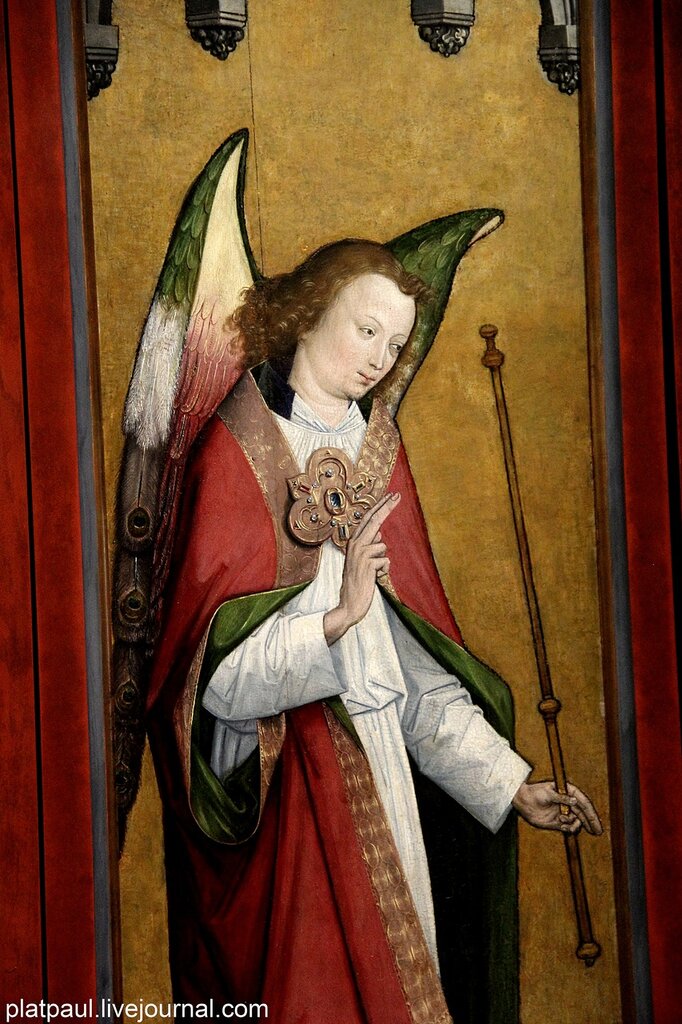 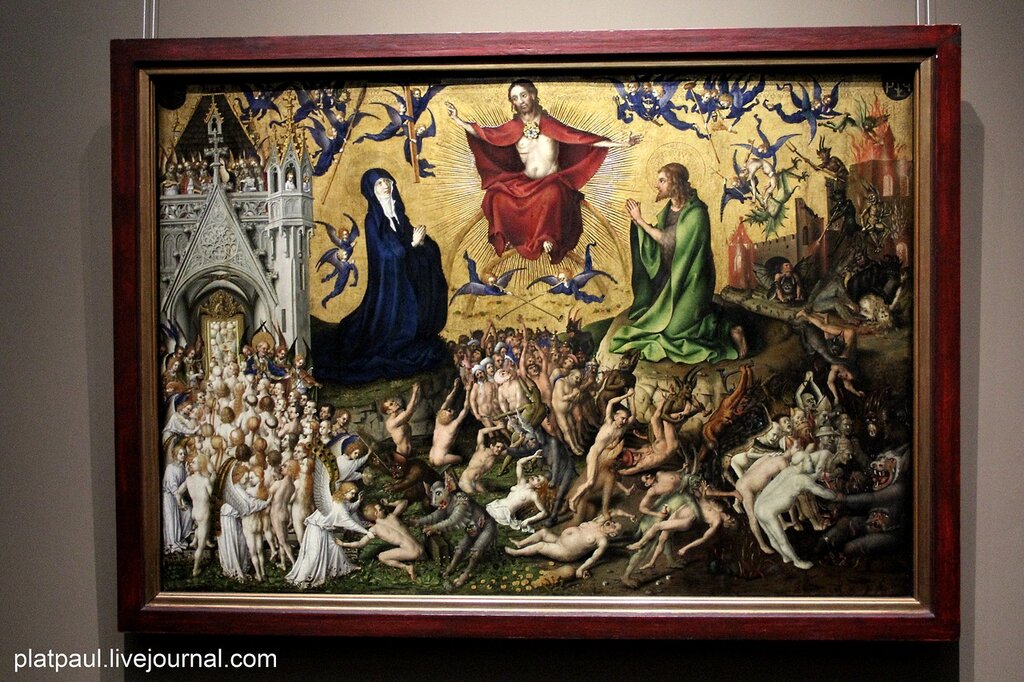 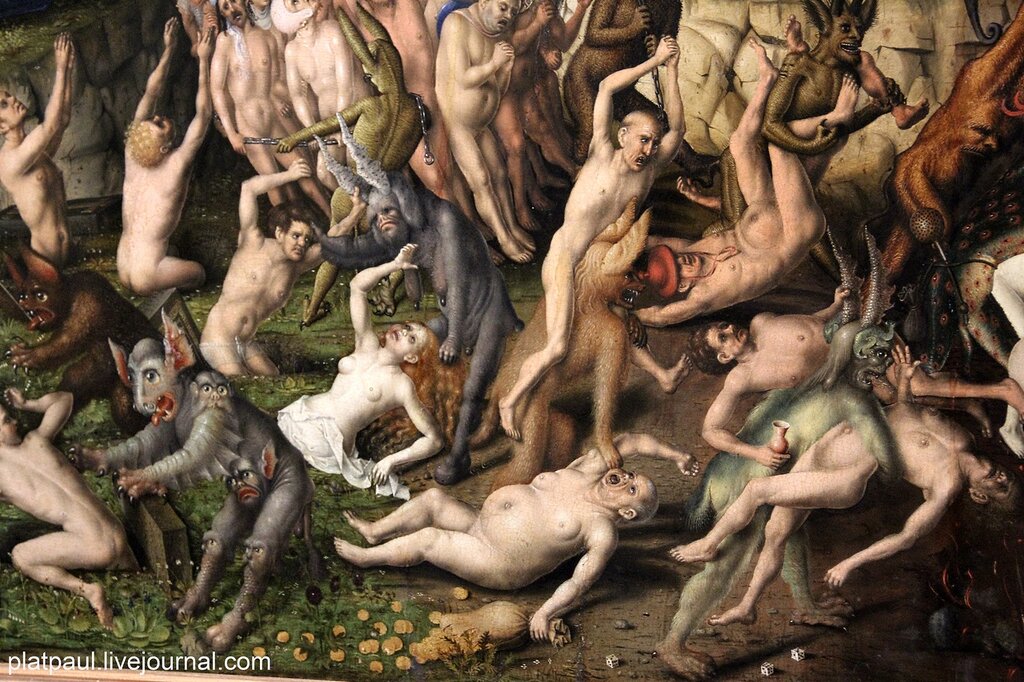 16. Not only the center, but the entire painting as a whole is full of details that can tell you a lot. 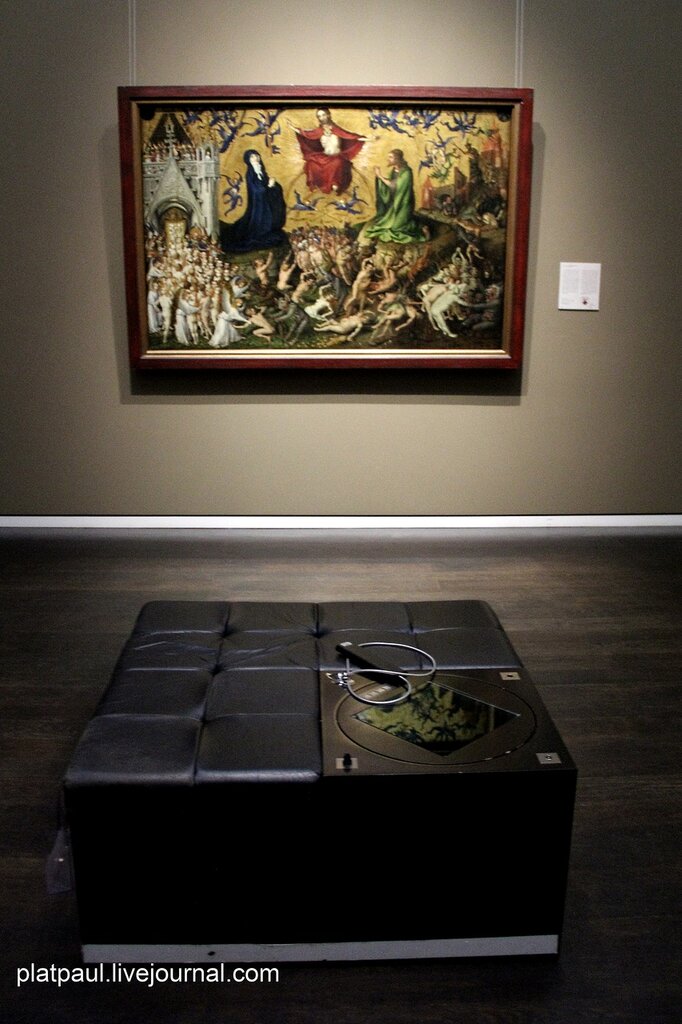 17. Each seat in the halls of the museum is equipped with a small screen and audio guide, you can listen and see the painting in detail if you wish. 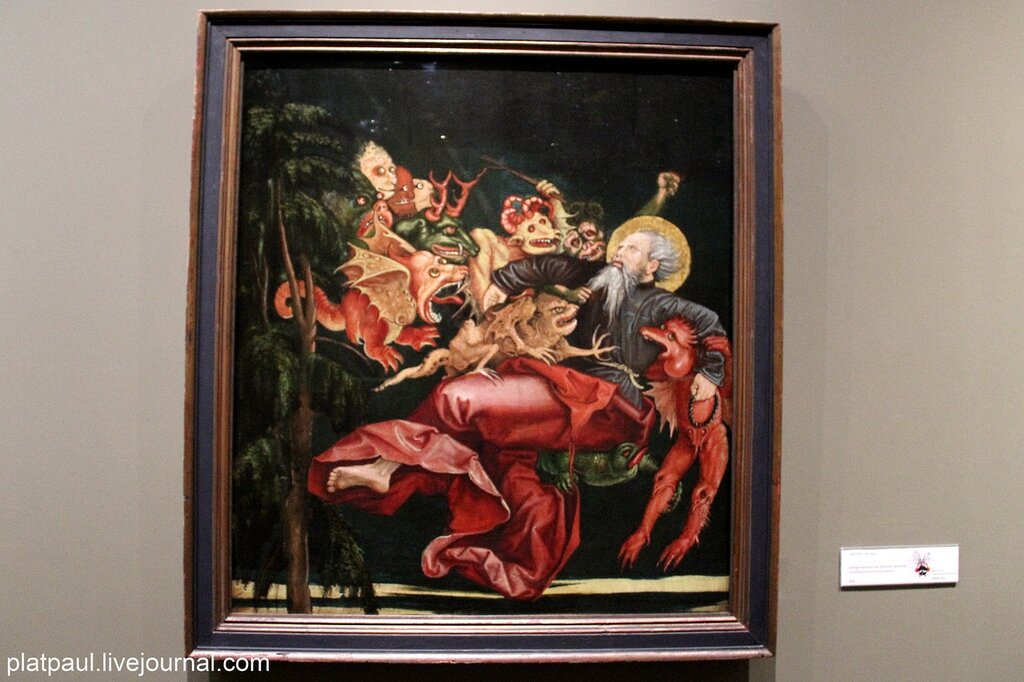 18. “Saint Anthony Tortured by Demons” is a painting by an unknown master. It’s hard to see that it’s not something contemporary, but a work dating back to 1520. 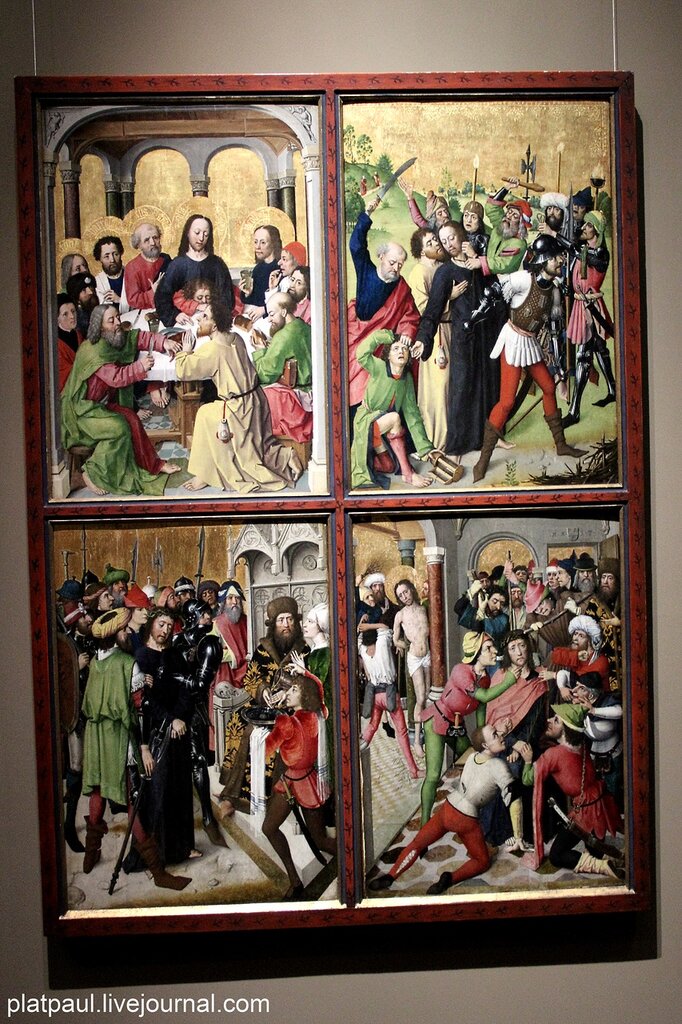 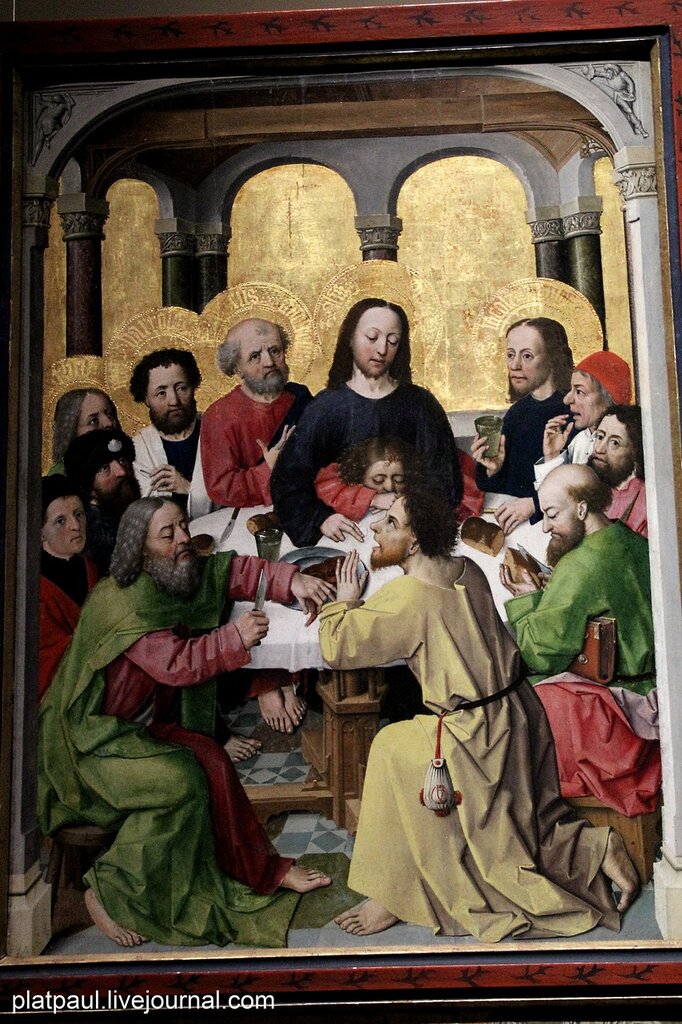 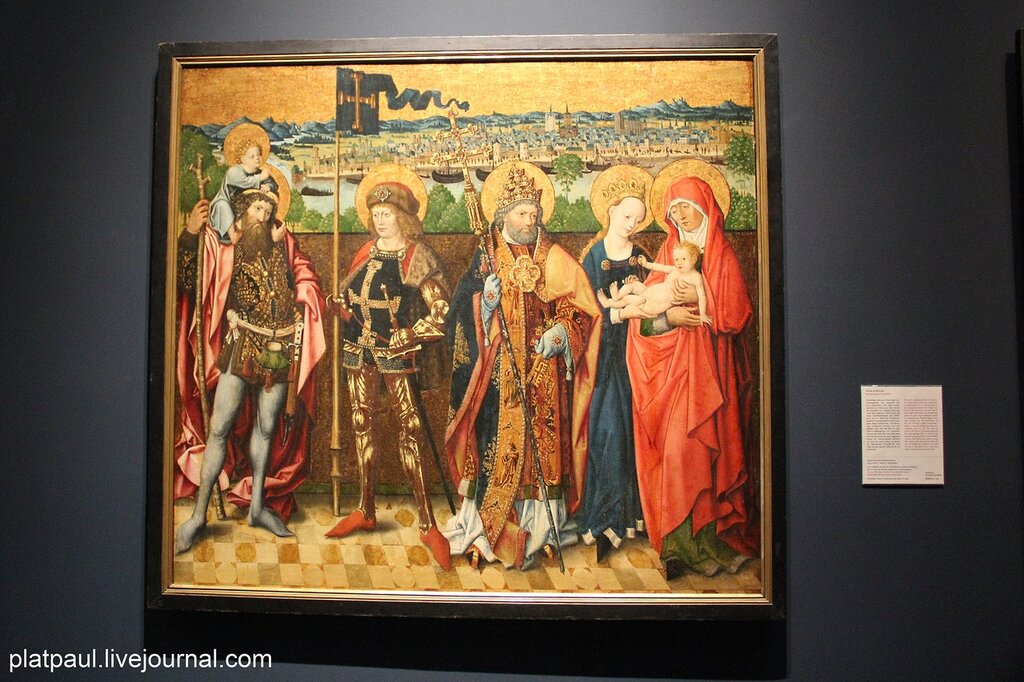 21. This is the beginning of my story about this museum, the continuation, as always, follows.